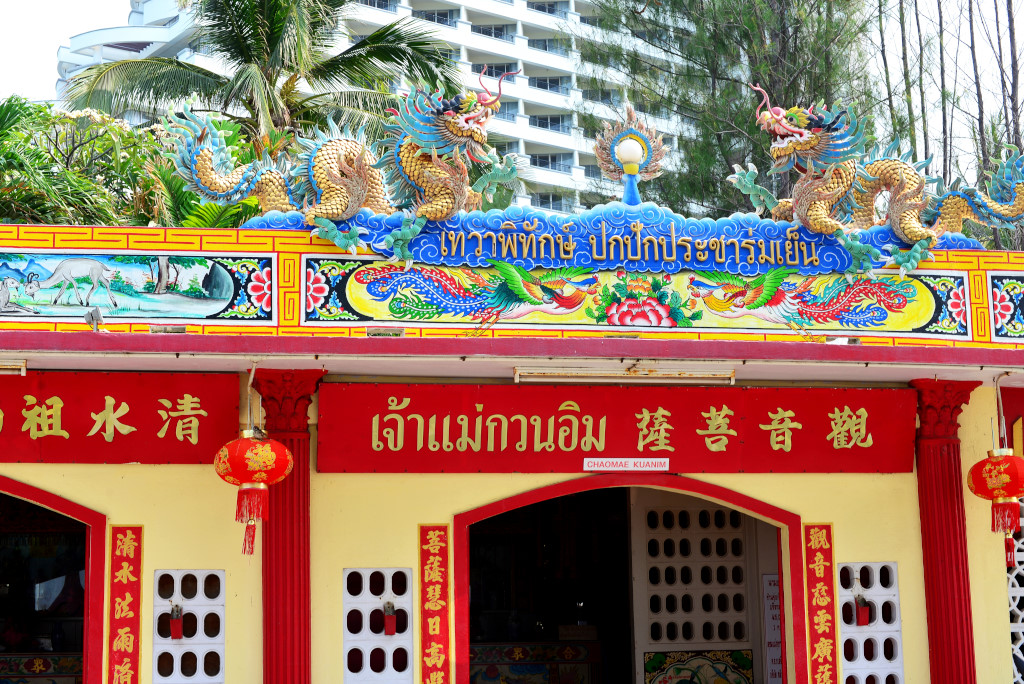 A pleasant jaunt to the Ruen Thong vegetarian restaurant for an amazingly tasty and inexpensive vegetarian selection following my morning preparations, far too much time spent on the internet as usual. 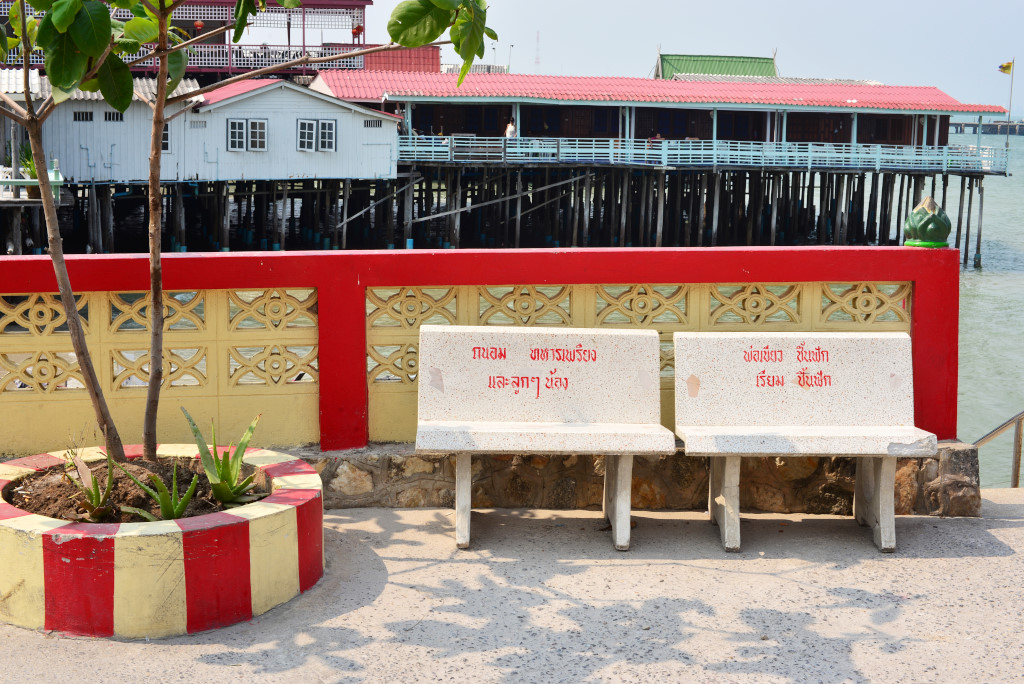 I am always looking for interesting photographic subject matter en route, and encounter probably one of the most arresting scenes in this country – a luxury Mercedes coupe parked in a spot secured on the pavement by two enormous durians. 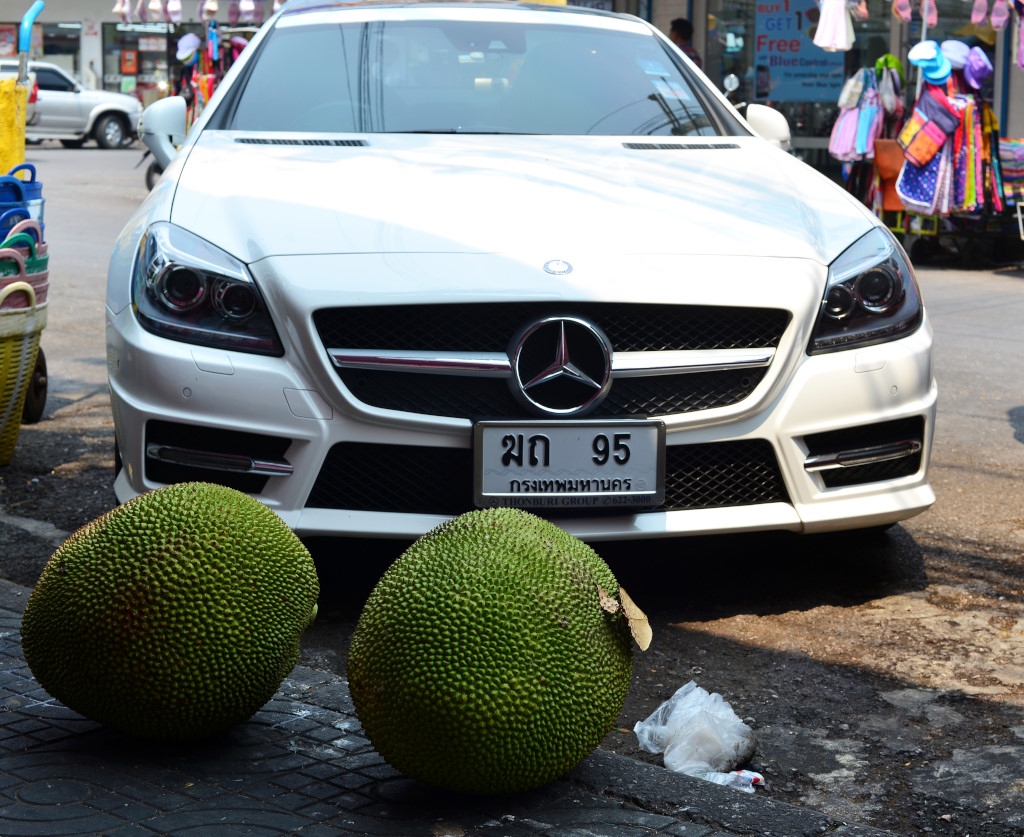 Not wanting to lose too much time, I hurry back to Phetkasem road to catch a green songthaew heading in the direction of the Royal Palace. In any case, there’s no chance I am walking on the same side of the street as the Royal Palace – I wouldn’t give the goons guarding the place the satisfaction of even making eye contact. 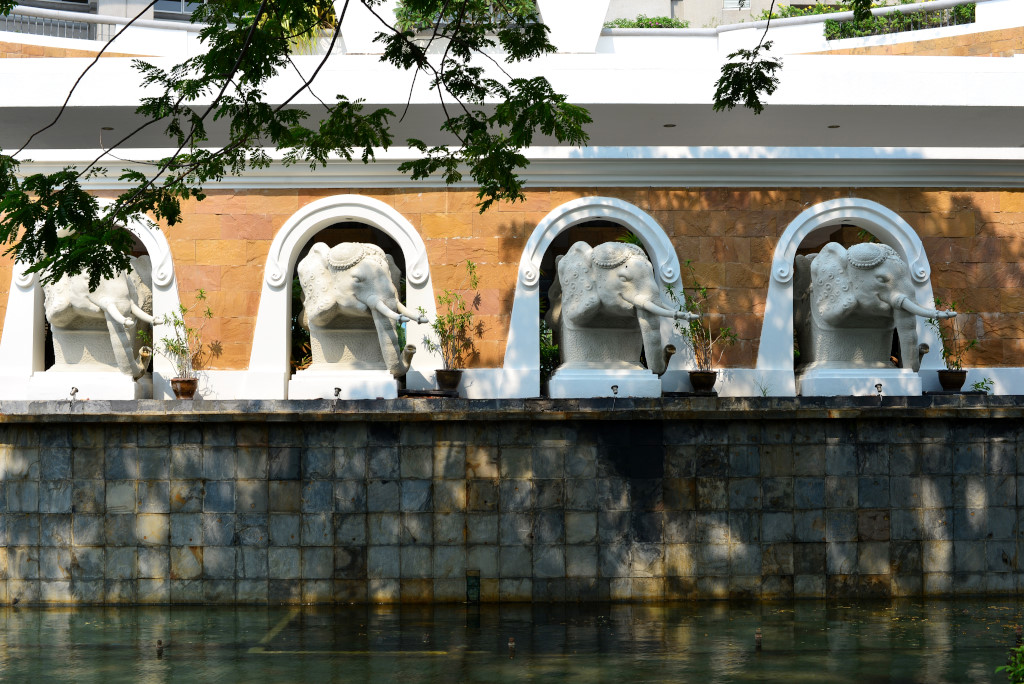 I am soaked by the time I reach the Immigration office, despite the continual gusts of wind and assiduously employed Cambodian fan, which I keep waving in my face after having taken a number and a seat in the waiting area. Initially, at least, the process seems straightforward: three sets of ticket numbers increment on the LED panel suspended on the wall until the number preceding my own is reached, then nothing. Wicket upon wicket is gradually deserted as the minutes tick by. It is now about 10 after noon – I wonder if they are closing for lunch or for the afternoon? 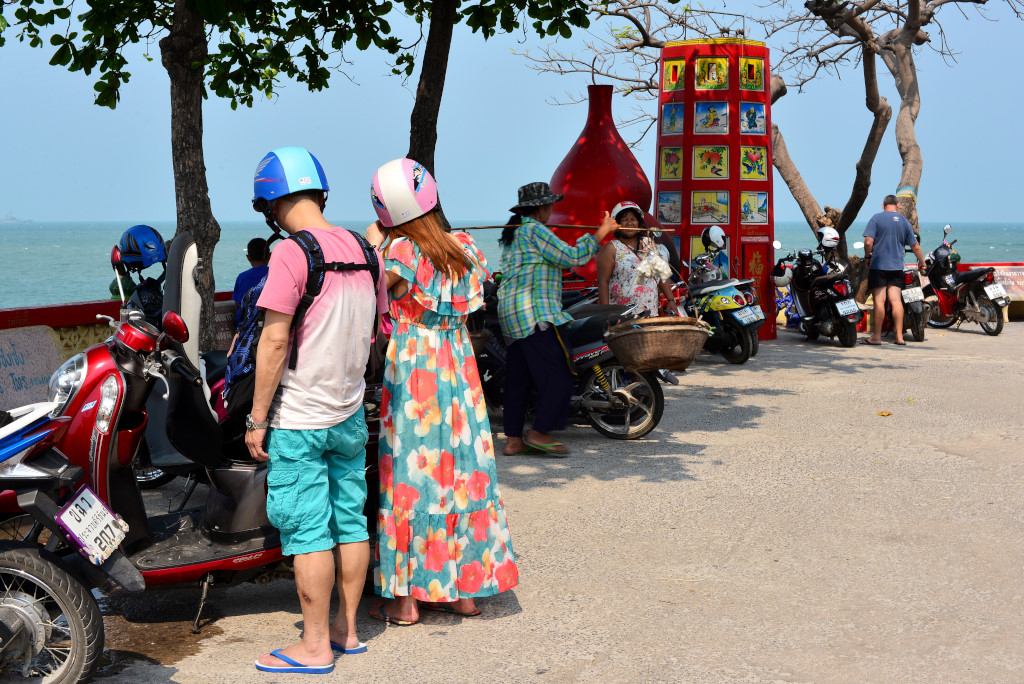 Conveniently, the information booth has been left empty, and standing next to the counter results in being completely ignored. I call to some of the younger women standing behind the counter, am initially ignored, then grudgingly asked what I want. The staff doesn’t speak enough English to be able to explain the process for extending the tourist visa, and following some barely coherent explication, tells me to come back at 1 pm. I am subsequently abandoned as I continue trying to get clarification from them. 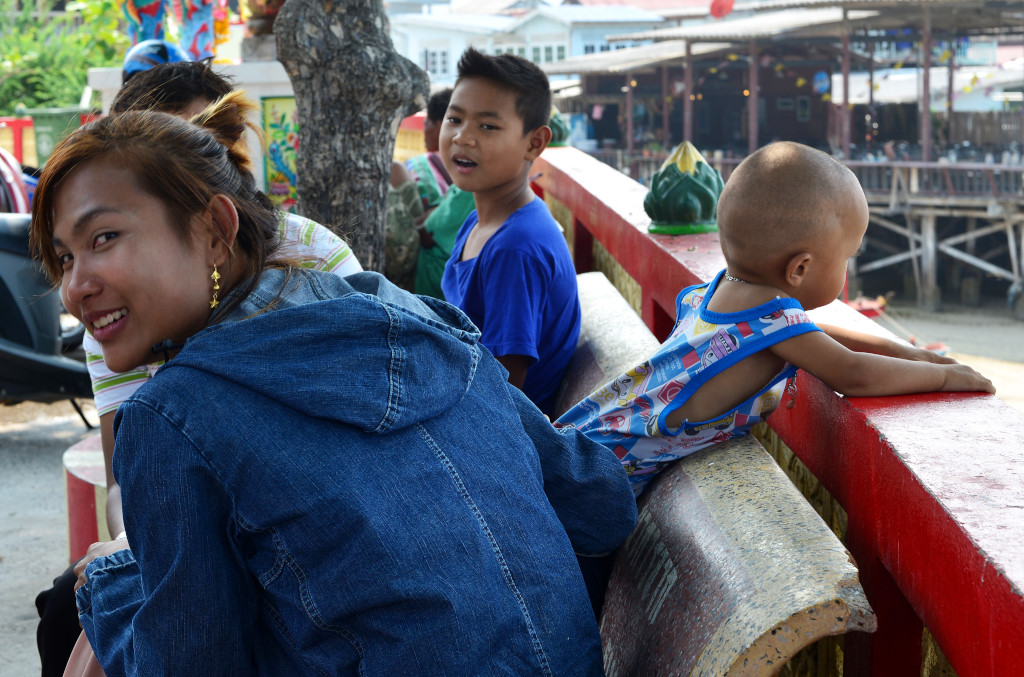 The workers refuse to return to the counter, even though they are not far away. There is seemingly no end to the number of foreigners wanting to extend their stay in the country, judging by the crowds here, some notable geriatric wheelchair-bound Caucasian men with much younger Thai women livening up the crowd.
A much friendlier man working for the same department attempts to assist me outside, getting no further than pointing out that most important cities and tourist centres have Immigration departments where I should in theory be able to submit an application with passport copy and photo. But wandering back through the heat to the main road, I am thinking I would probably be best just to cross over into Malaysia on April 5th when my visa expires, and just forget about the complications of being here. 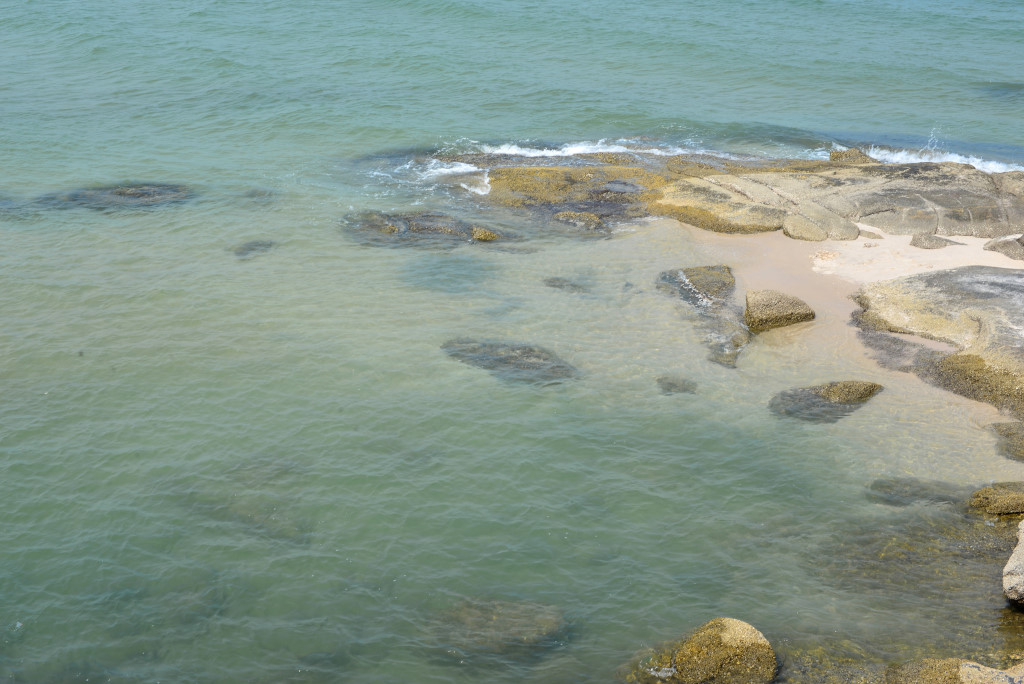 A quick coffee at the Mon Ta Cha To coffee house offers a few moments of redemption, although probably the worst thing for survival in this heat and humidity, followed by a short writing session in the nearby hotel room. The air conditioning was supposed to have been repaired today, but it is absolutely no better now than it was yesterday. 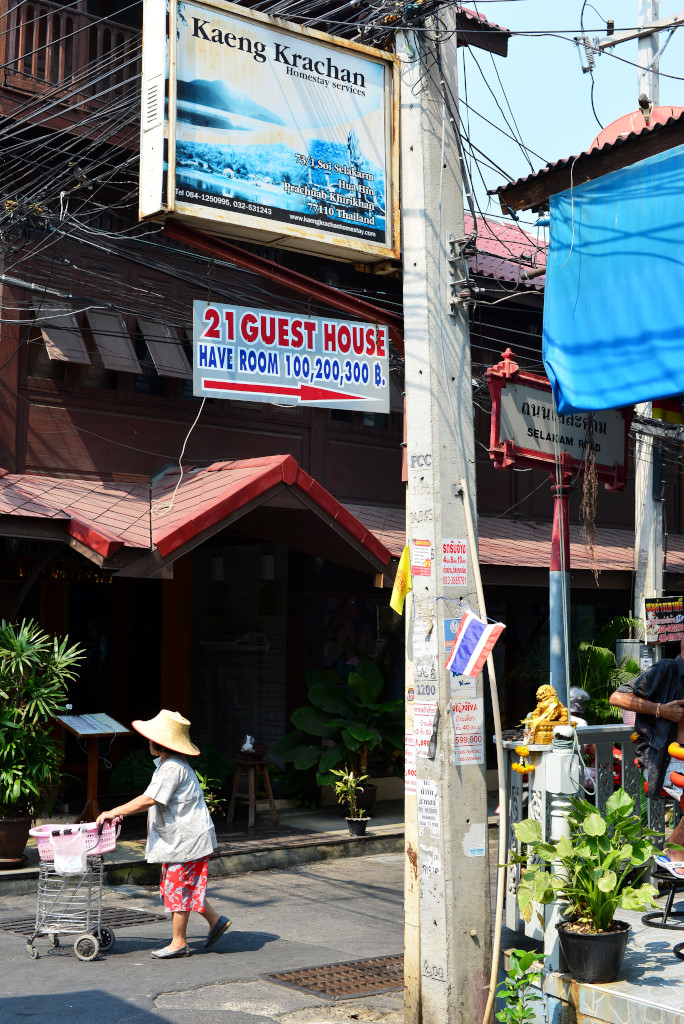 Walking through the side alleys leading to the Hilton hotel would be very atmospheric and rich in character, if it weren’t for the fact that the area was so saturated with sleaze. It has more character in the evening, the sun-bleached day time look not particularly complimentary, although at least the chorus of massage parlour workers and call girls is not as grating, as everyone is at the beach – or in their hotel rooms, recuperating from the presumptive debauchery the night before. 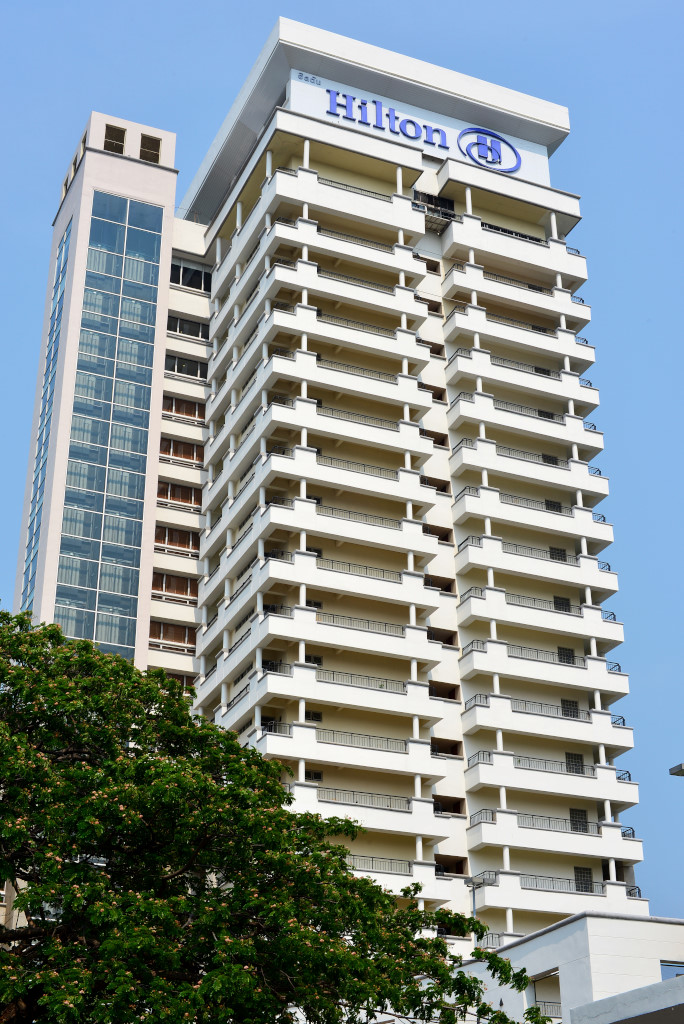 One thing must be sure in these resorts – the per capita consumption of Viagra must be through the roof. Given that this town is a dumping ground for Kashmiris, some of the few legitimate craft stores are selling the usual generic Indian claptrap, not to forget fake pashminas in quantity, just what the love-struck ancient Dutch men are longing to ply their teenage Thai girlfriends with. Most of the Indian establishments sell cheap tailored clothing, which seems to be an even poorer match for the tourist demographic.

Surprisingly, men in one local workshop are busy making very impressive leather dress shoes, not something I would have expected, not that I question Thai craftsmanship. The Hilton hotel is incongruously set against this debauched scenario, although the intent is to face the beach to the south.

The beach meanders towards the raft of hotel towers disappearing into the haze to the south, the initial dense mesh of beach chairs and umbrellas giving way to unimpeded sand ranging from the hotels on one side and the gently lapping waves over the shallow shore on the other. The surf here is gentle, washing past clusters of rocks that some of the beachgoers camp out on, and despite the resolutely commercial tourist facade of the beach, the density of visitors is very low, rendering the shoreline very private. 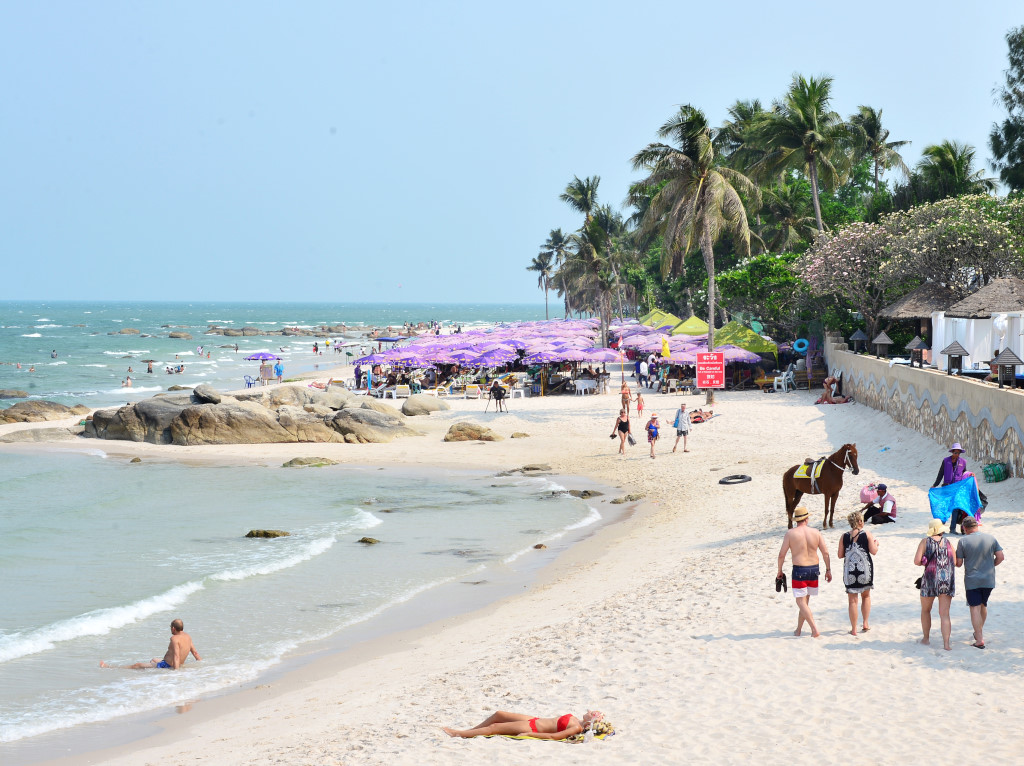 One great fear of mine is an unfortunate encounter with some nasty underwater creature, and the dead puffer fish lying on the otherwise pristine beach makes me very happy to wade no further than the shallows. The beaches are probably regularly cleaned – there is no way this sparkling sand could be naturally so immaculate. There are apparently further, more private beaches in the Hua Hin area, although I hardly feel compelled to travel further out of town, given what lies next door to me. 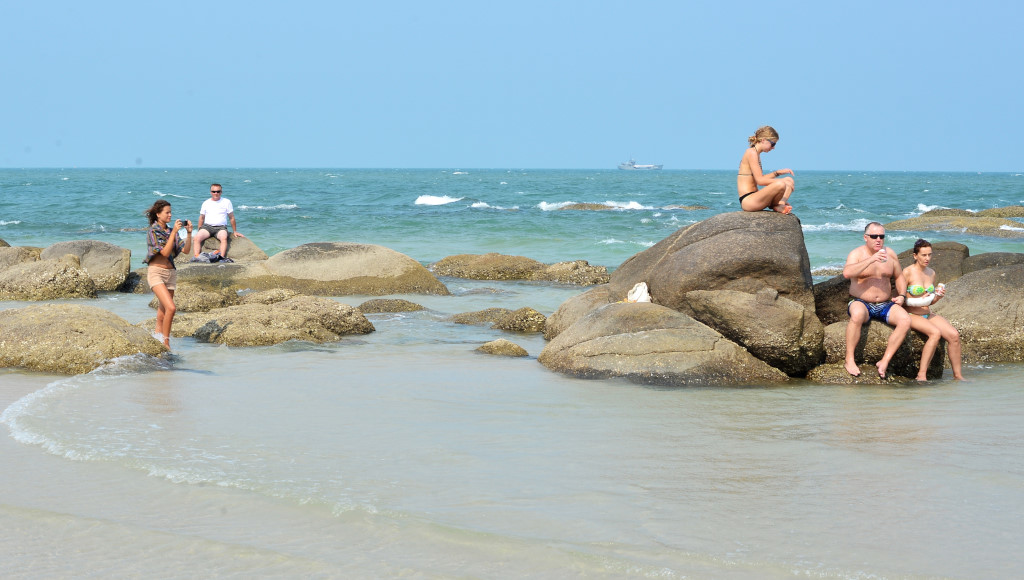 Very few banana boats or other inflatables are visible on the water, perhaps because the western tourists the hotels here cater to aren’t interested in such mundane beach activities. Further to the south, the kite surfers hold sway, a mesh of sails suspended against the sky, soaring, swooping, threatening to plummet into the waters below, last minute racing back into the sky. It seems incredible to me that no one collides into anyone else or worse, lines between the surfers and their kites become entangled. 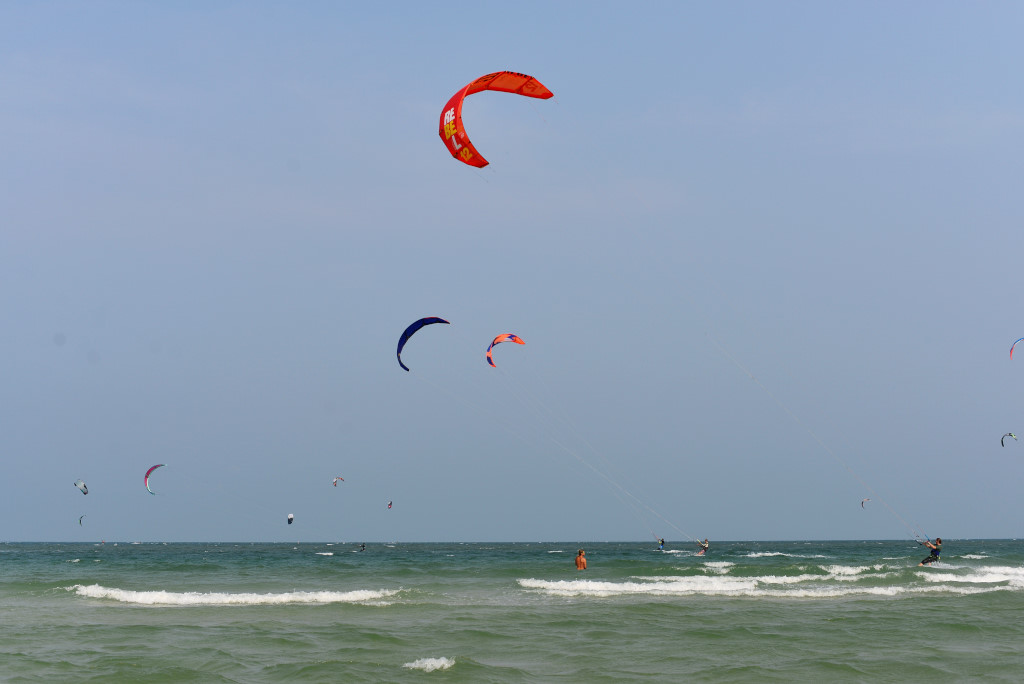 The mostly male athletes speed towards the shore and then in the last moment arc outwards, expertly controlling the angle of the sails far overhead, driving them in the desired direction. One of the leading talents on the water jumps off waves, flying through the air, only to land graciously in another position; when finally reaching shore, he invites me to join in the fun – in fact, he owns the kite surfing school on the shore that many of the surfers are learning at. ‘It’s easy’ he tells, brushing off my concerns. ‘It’s much easier than windsurfing – once the kites launch, it’s easy to keep them in the air, and even if they go down, they float, as they feature an inflated component. Just pump the sail and off you go’ he tells me breezily. Inspiring as his words may be, I am content for now to watch the surfers racing back and forth in the water. 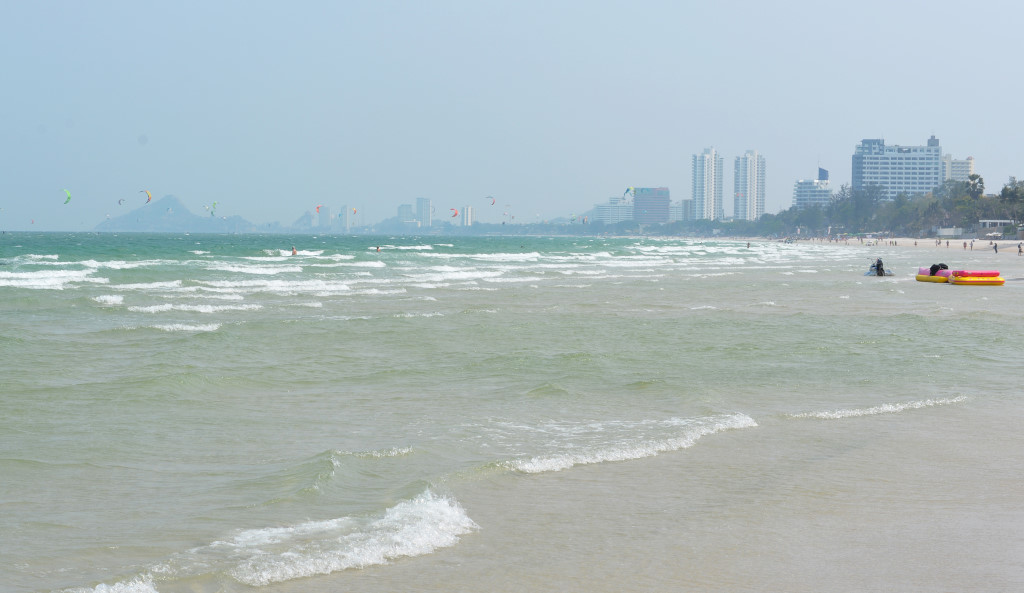 And now for a major drama of another and less fortunate sort. Wandering through the impeccably clean alleys leading back to my guesthouse, I am yet again inspired to take some random shot. The opening of the loose felt bag containing my camera is pointing downwards, and while being removed from the daypack, the heavy full frame camera tumbles onto the ground with a sickening crash. Ever the naive optimist, I reclaim the camera after some initial cursing, but the shutter release no longer works. The fEE error message I had see once before is displayed when I try taking a photo, but when I check the aperture ring lock that should cause the message, it is in place. 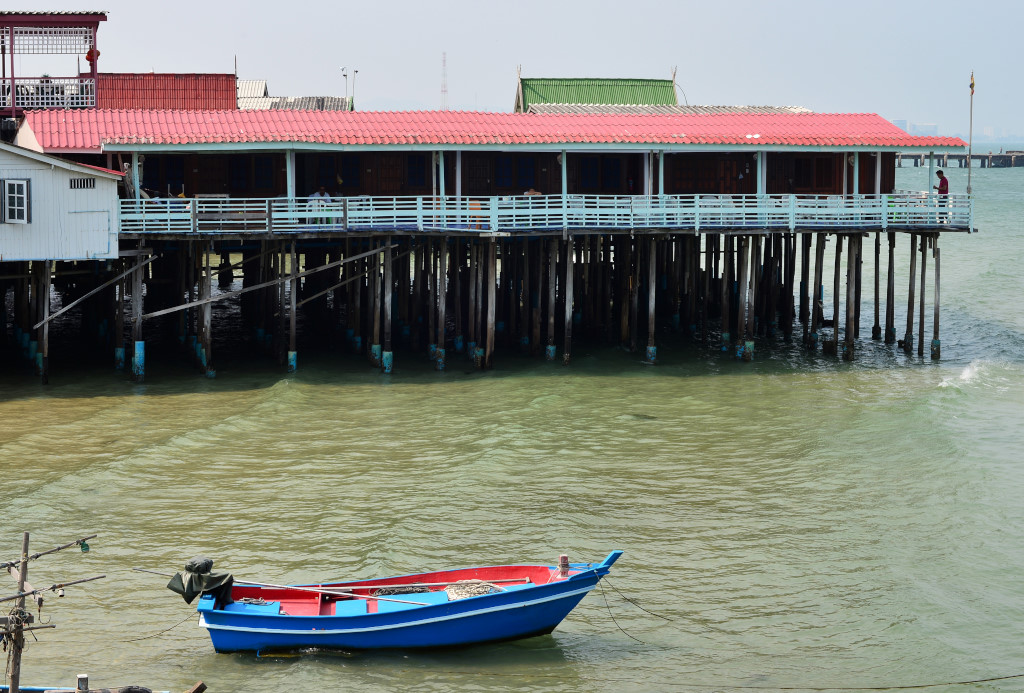 I toy with the camera, powering it off and on again, remove the lens and reattach it, but nothing. The electronics on the camera seem to be functional, but the focus and shutter control don’t engage, irrespective of whether the camera is in automatic or manual mode. This is a very expensive piece of hardware, and there is now a serious likelihood that it is physically damaged, and also very likely that I will not be able to do anything to recuperate the camera in Hua Hin. 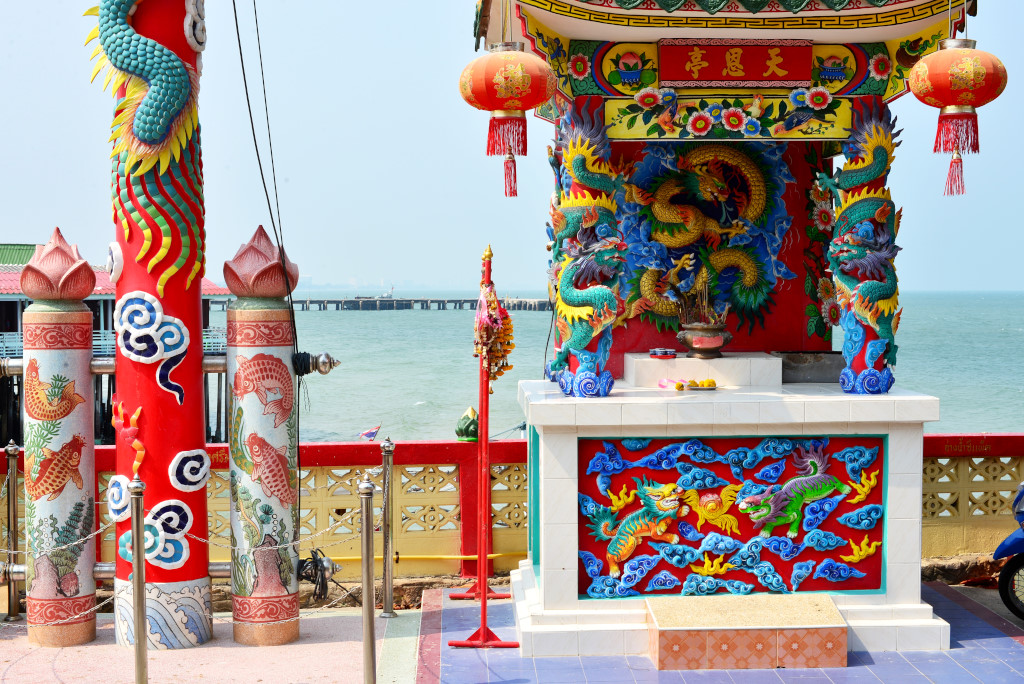 Despite numerous posts indicating that there is no camera repair service in town, I do find one web site, and then the comedy of errors trying to trace the people representing the company down. The only to me legible contact information on the web site is the telephone number, as the rest of the text is in Thai. The owner of the hotel downstairs can’t help me, as she speaks no English and her daughter is gone to the market, but she points me to the motorcycle rental shop around the corner where someone does. 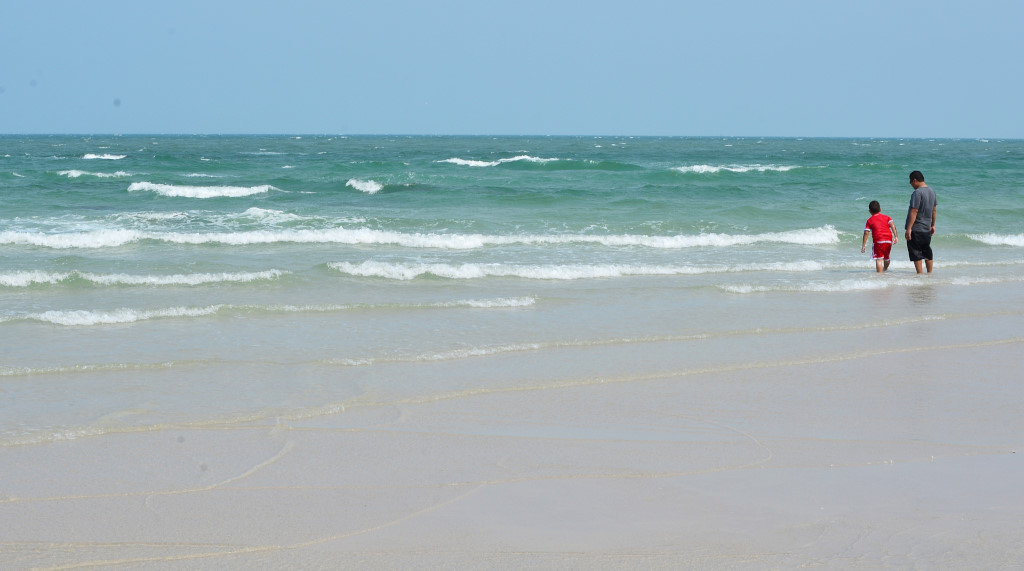 It takes some negotiation to explain what I want to the women in the rental shop, but eventually she calls the number provided, gleans the address the repair shop is located at, and instructs me to leave immediately, as it is already late the day. The next debacle involves finding a motorcycle taxi driver. I am pointed in various directions by the somewhat ambivalent locals, and finally land on the street corner where the drivers apparently stop. 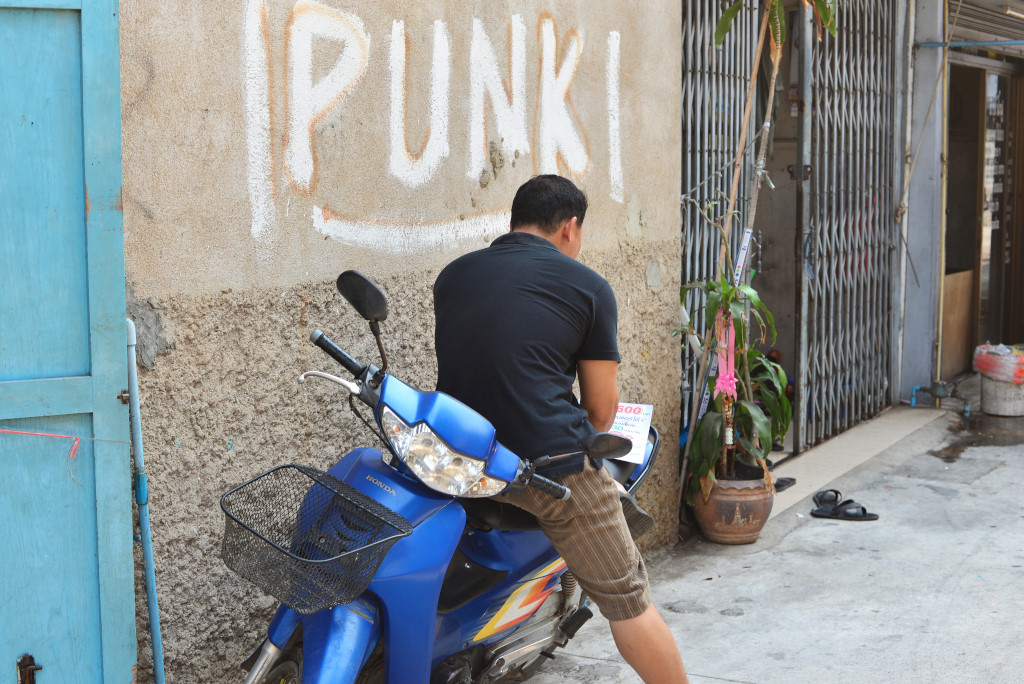 Not long into the wait, an older beaming orange-vested driver arrives, happy to take me to my desired destination, except he has no idea where it is. The young couple on the adjacent motorcycle provide him with directions, and then we are off, except when I finally arrive at the shop, the two young women busily playing with their smart phones inform me that I need to come back in two hours. I try to find out why I was told to come here now, but there is too much of a language gap. Piecing together the words and after a number of phone calls, the decision is taken for me to return to the hotel, and the man in question will pick up the camera from me. 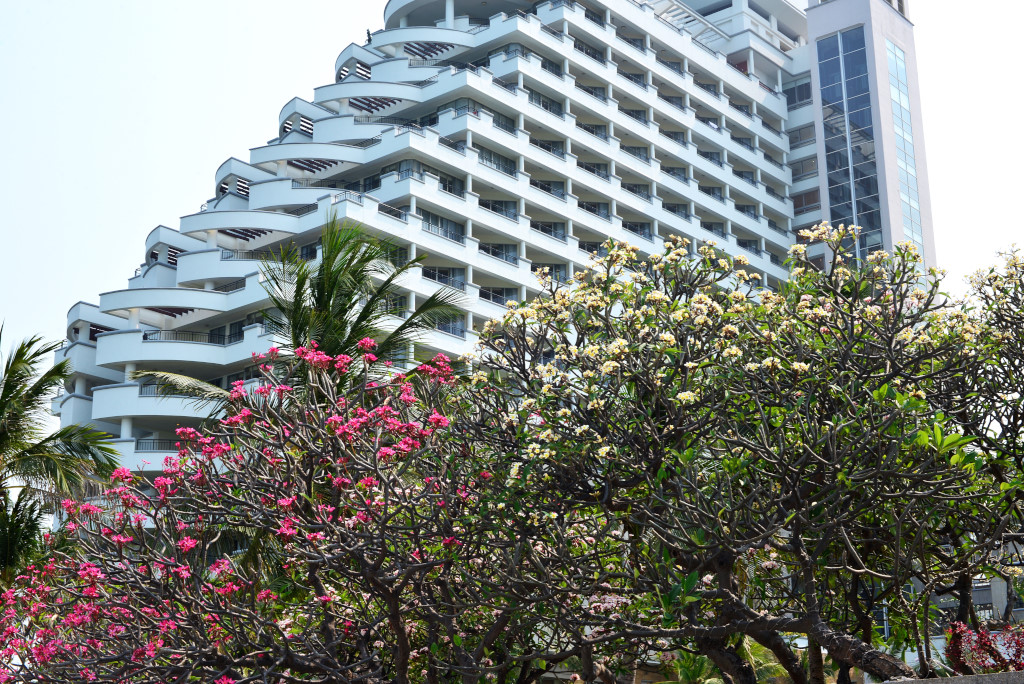 Back to the hotel, then a quick and not particularly memorable dinner at the market area next to the hotel I am staying, then back to the hotel, where the man is already waiting for me – so much for the two hour wait. And no, he can’t find an easy solution, either, and even if he takes the camera and looks at it in his repair shop, I doubt he would necessarily have the parts or expertise to repair some potentially obscure part of this delicate precision mechanism that went awry. 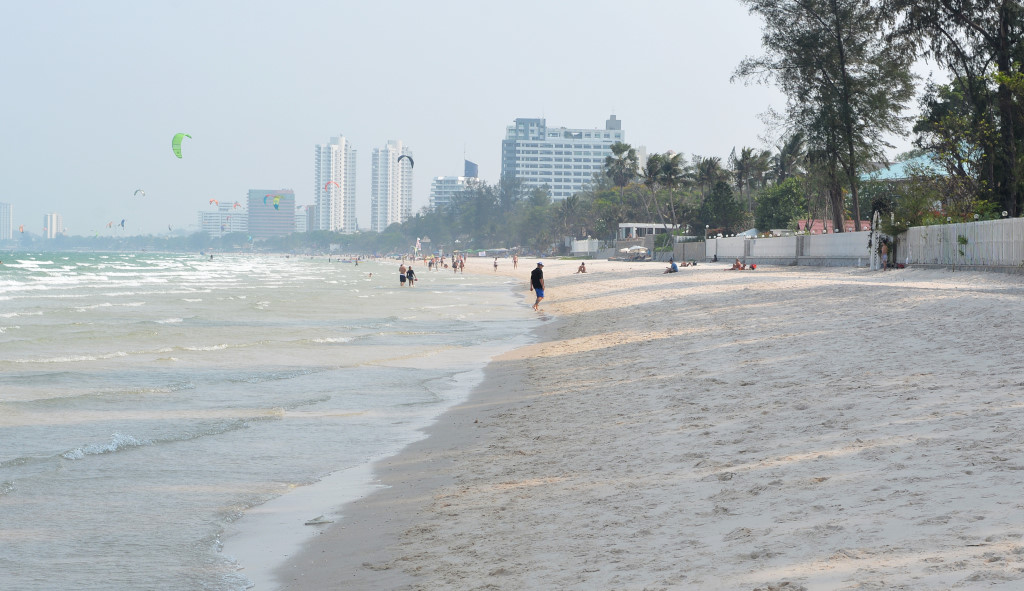 I was incredibly lucky with my Nikon 5000 series camera, that went through an incredible battering over the years, but never broke down. One fall and my new and very expensive camera may not survive. What’s more, once the camera is broken open for any sort of repair, the warranty could be voided – but I have little way of taking advantage of the warranty in small-town Thailand, unless I return to Bangkok. The man brushes off my concerns as he takes the camera from me – fixing it should be no big deal, and he will contact me again on Monday. But I am far from optimistic … 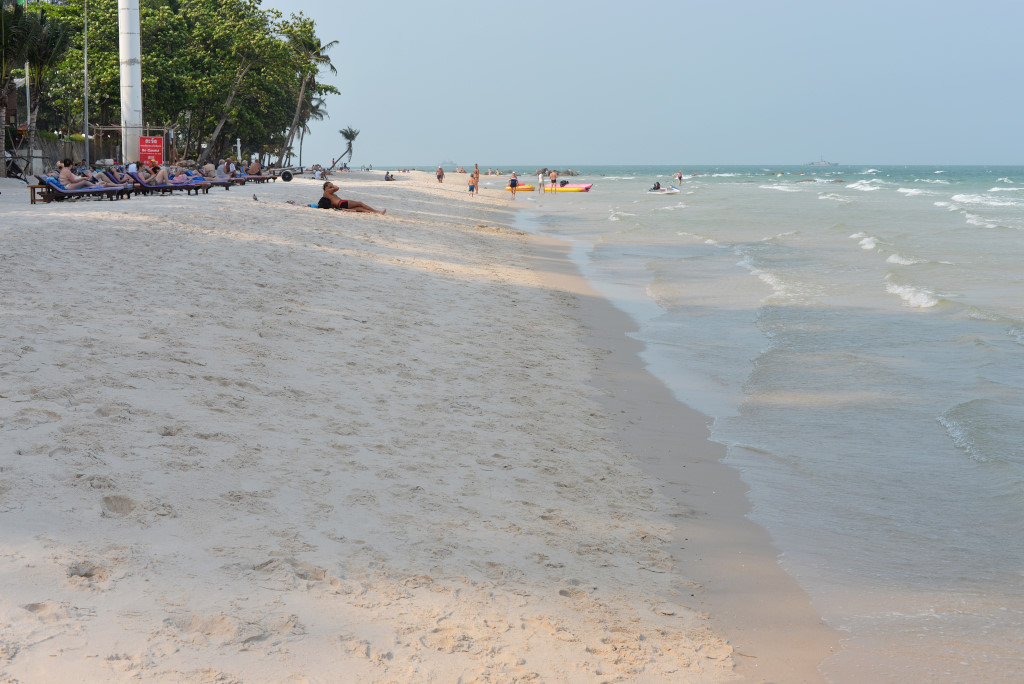 I have a hankering to go out in the evening and grab a beer somewhere, but considering the area is full of either simply night market-type stalls or girlie bars, there is not much incentive. And however mediocre the air conditioning in my room is, it is still functioning air conditioning! 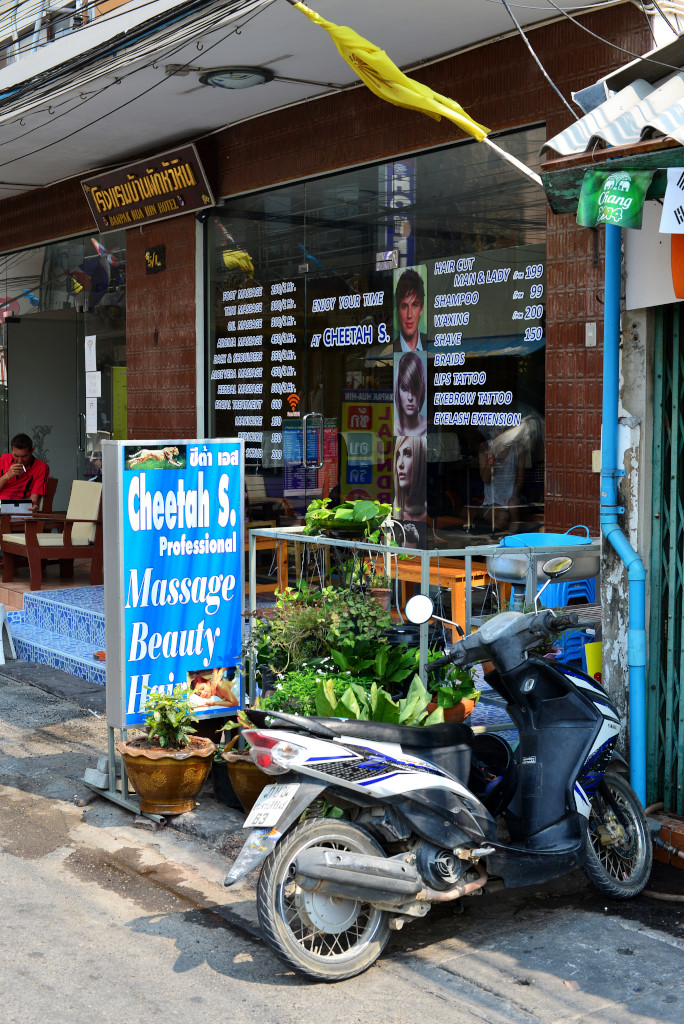