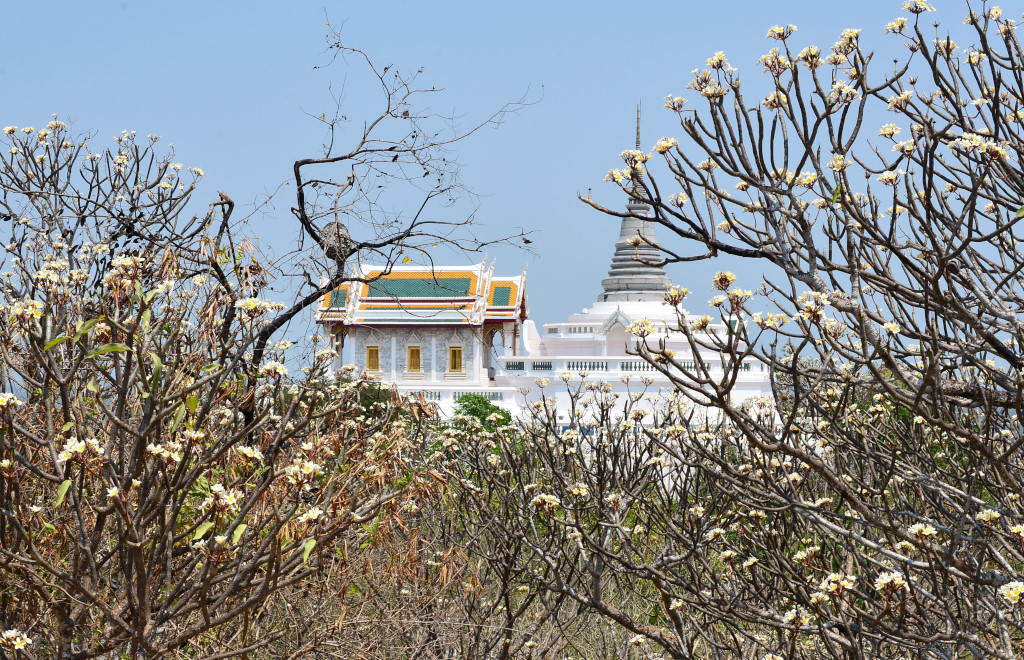 I spend a delightful morning at the 2N Guesthouse, eating breakfast amidst the frangipani trees in the rising heat, then retire to my room to get some writing done. 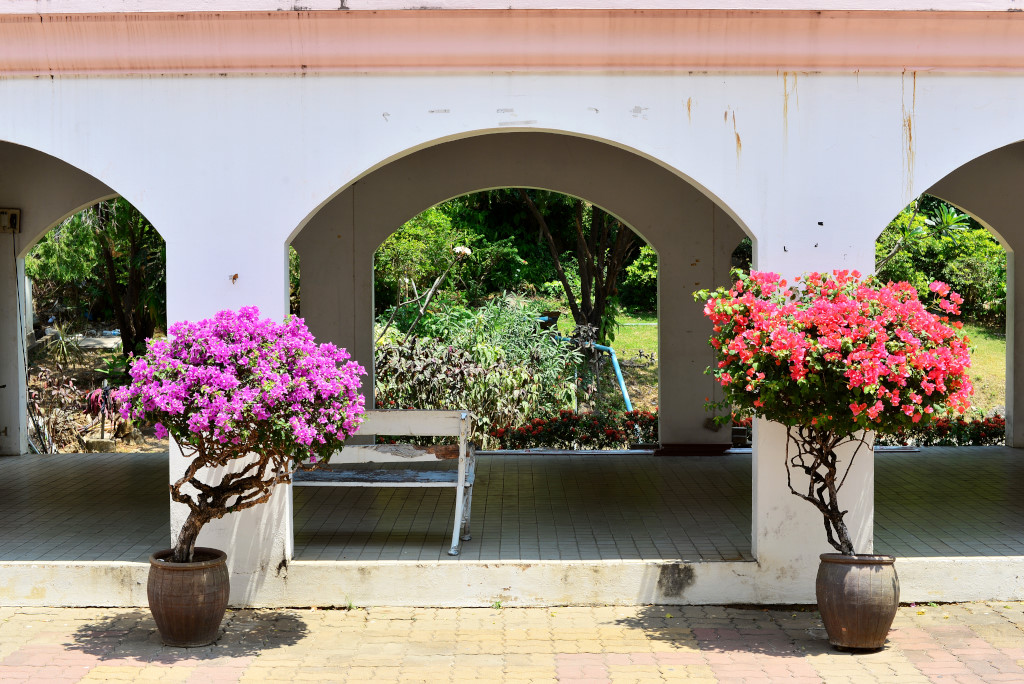 The first stop of the day and the major attraction of Phetchaburi is Phra Nakhon Kiri, the erstwhile residence of Rama IV, the most influential and loved king in Thailand’s history. Fronting the mountaintop escape lies a long row of small shops housed in a continuous structure, where all manner of trivial tourist claptrap greets the visitor. The ambiance is muted but authentic, catering almost exclusively to a local audience.

The western access to Phra Nakhon Kiri is via cable car, passengers paying 50 baht over and above the nominal 150 baht admission. Since the eastern walking access is riddled with feral macaques, I would rather stay on this side! 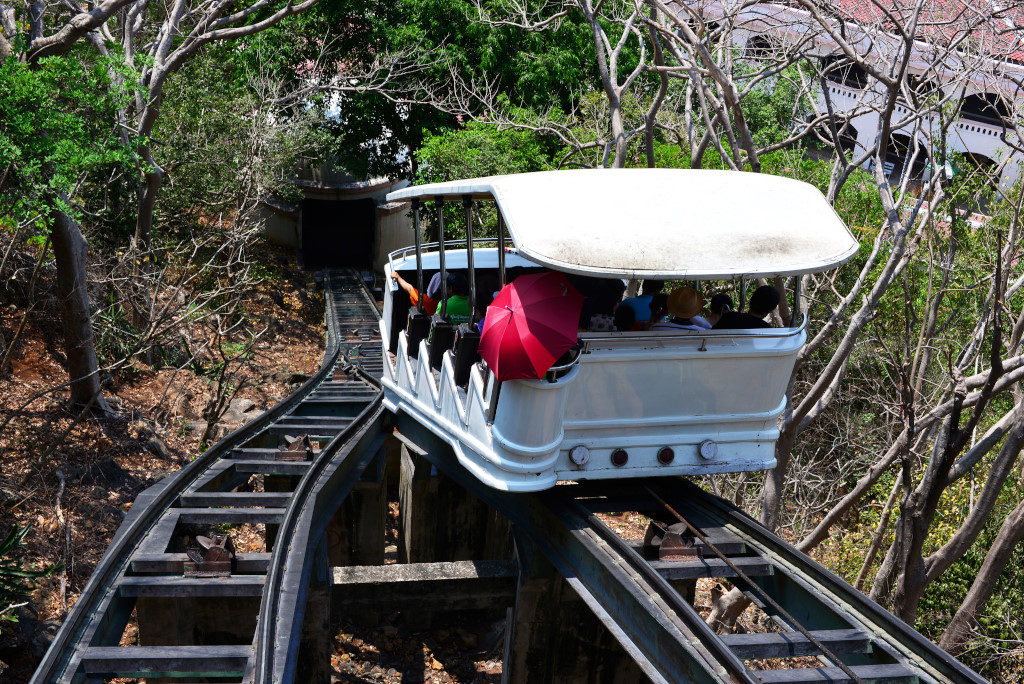 The interior of the cupola at the base of the cable car is covered with an intricate frieze of a Buddhist nature, not that I have any idea as to what it may represent. One cable car ascends while the other one simultaneously descends, passing each other where the tracks separate, then rejoining again. 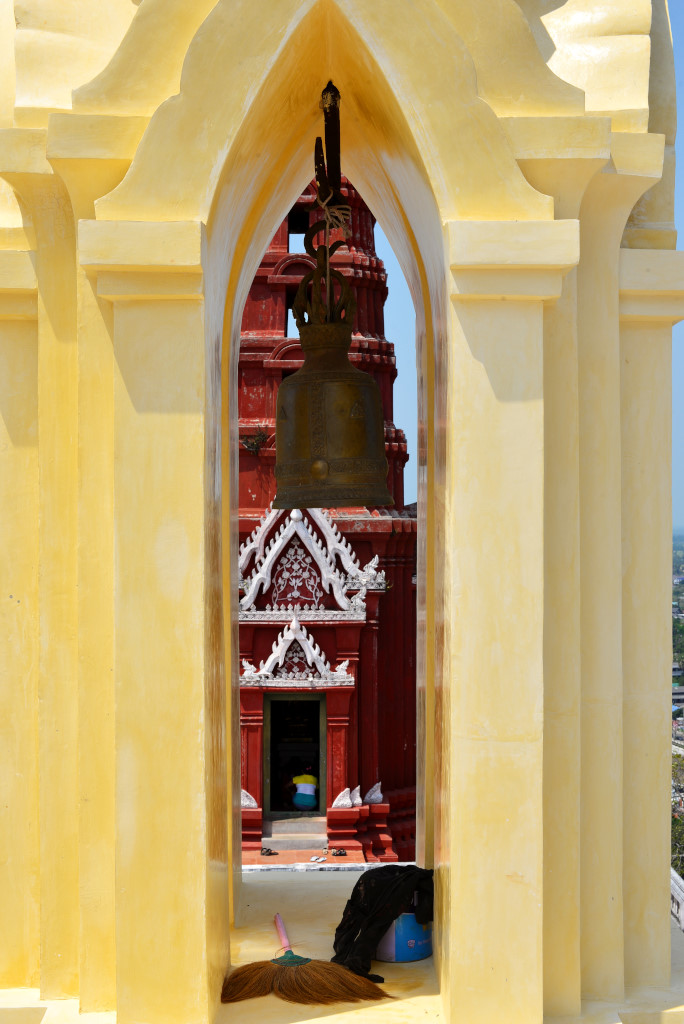 The complex atop the mountain consists of a number of independent structures, the central gardens and palace joined by two small temple groupings by means of sinuous stone walkways leading between the individual peaks. The entire hillside is replete with flowering cream and rose frangipanis. The royal palace itself is small and intimate, furnished with European mid-century furniture and decorative features. 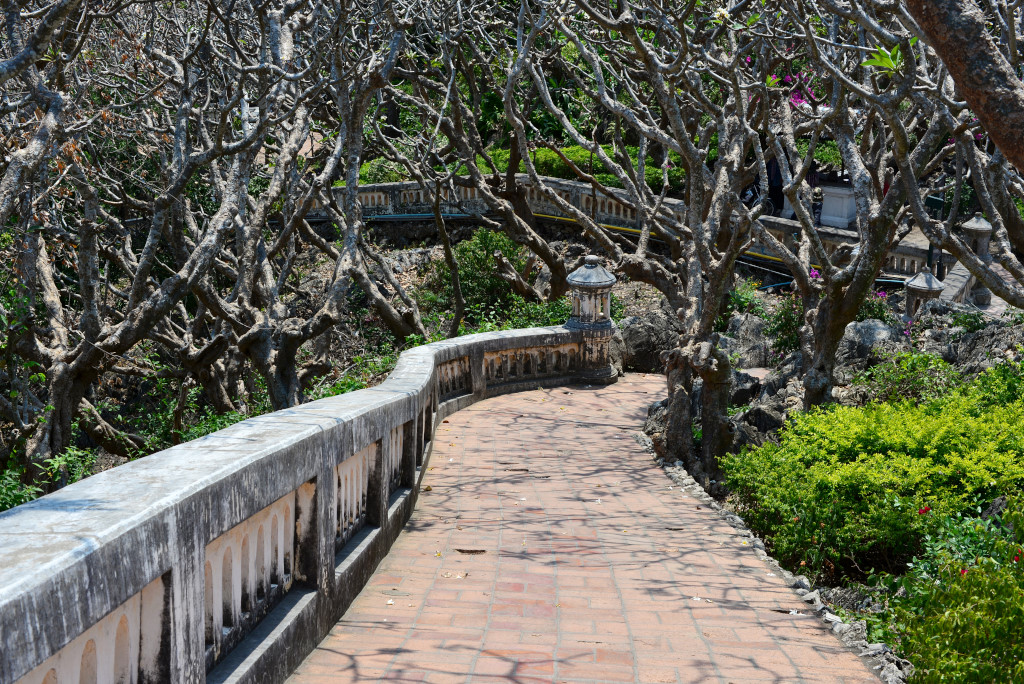 The palace and gardens are simple but beautiful in terms of the architecture, landscaping, privacy, and floral plenitude. Stellar views of the town are afforded from much of Phra Nakhon Kiri, and particularly the areas at the edges of the escarpments offer respite from the intense heat, what with the cooling winds that caress the higher elevations. Not that I am not already hopelessly drenched in sweat … 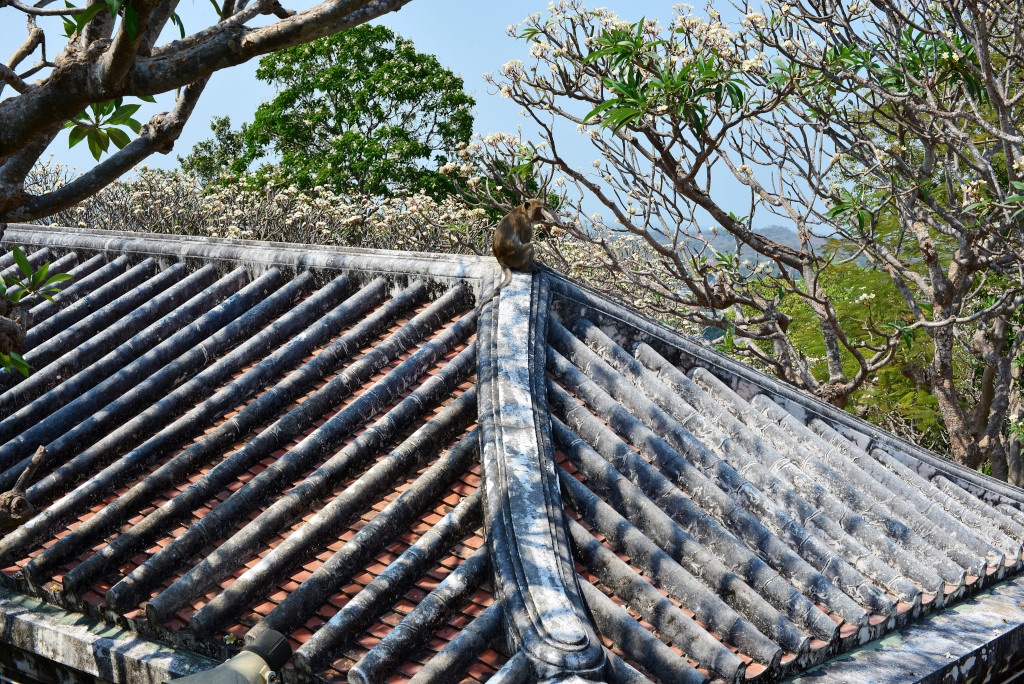 Despite the warning signage, the macaques are nowhere to be seen. In fact, they are hiding in the trees, on the roofs, and behind the stone balustrades, waiting for their moment to snatch any food that is left unattended for a few moments. Seated in a stone gazebo overlooking the town, I become the subject of the photos of a group of young locals who obviously don’t spend much time in the likes of Pattaya or Phuket. But the kindness and innocence of small town Thais is also a very good reason not to visit said resorts and their ilk. 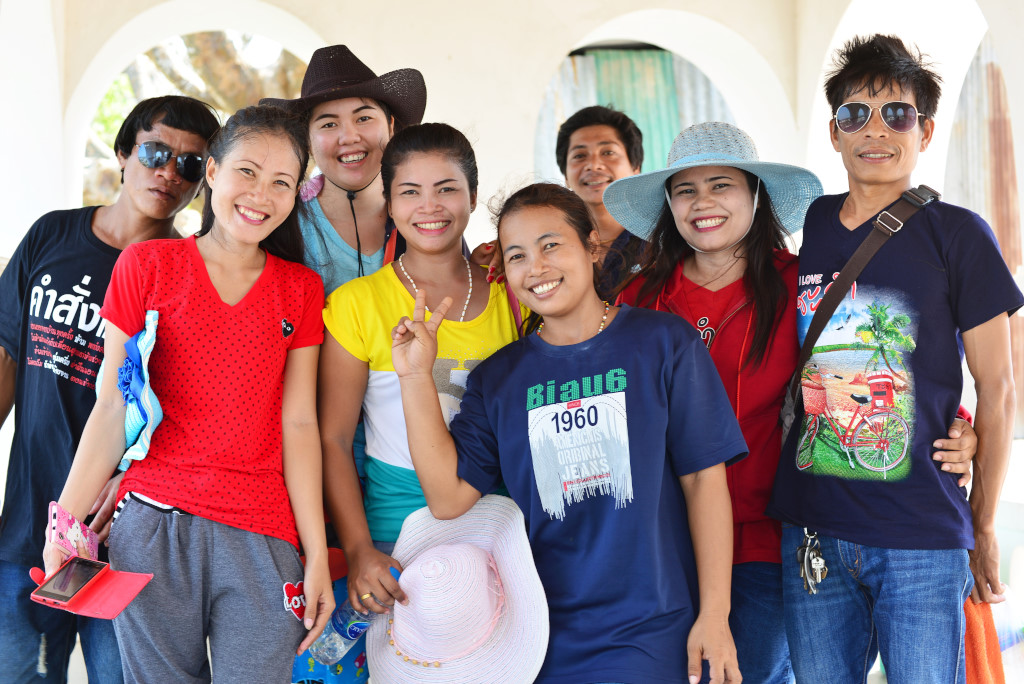 I am ready to take in some of the alluring foods I saw on display en route to the cable car, but returning to Petkasem 34, it becomes apparent that even if I wanted to take in the local culinary delights, the foraging macaques prove to be somewhat of a disincentive, beginning with the youngster that bares its fangs while hanging from an eave directly above me as I lock up my bike. 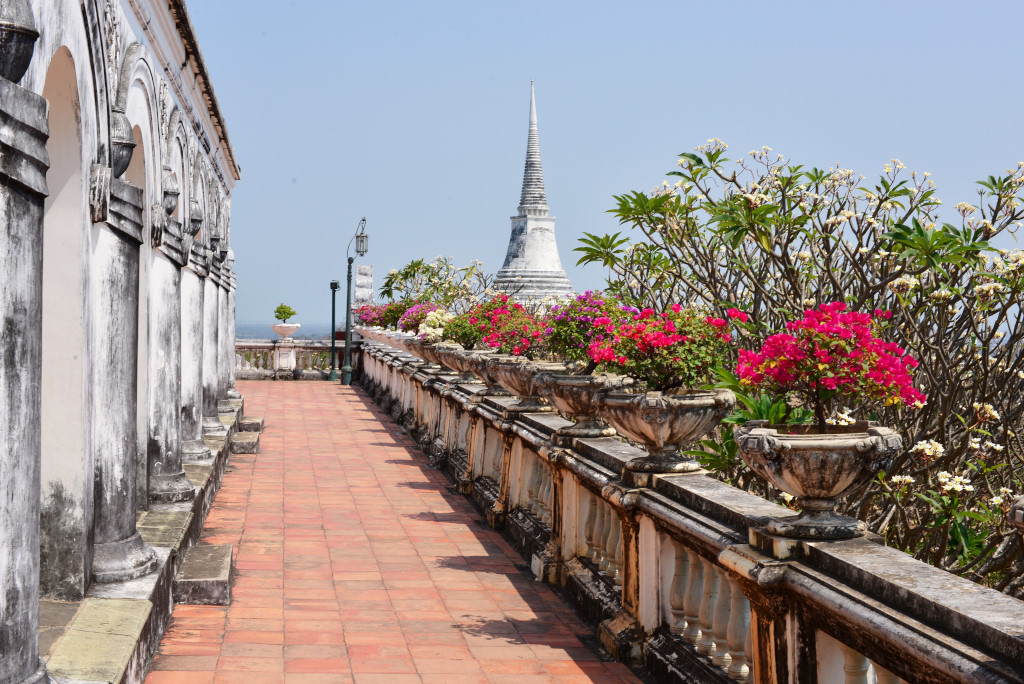 The wide variety of dried seafood products on display is complimented with the assortment of coconut- and rice-flour based sweets that do little to satiate the appetite. At least the baggie of another local specialty, fresh, juicy and tangy rose apples quell the thirst to some extent. 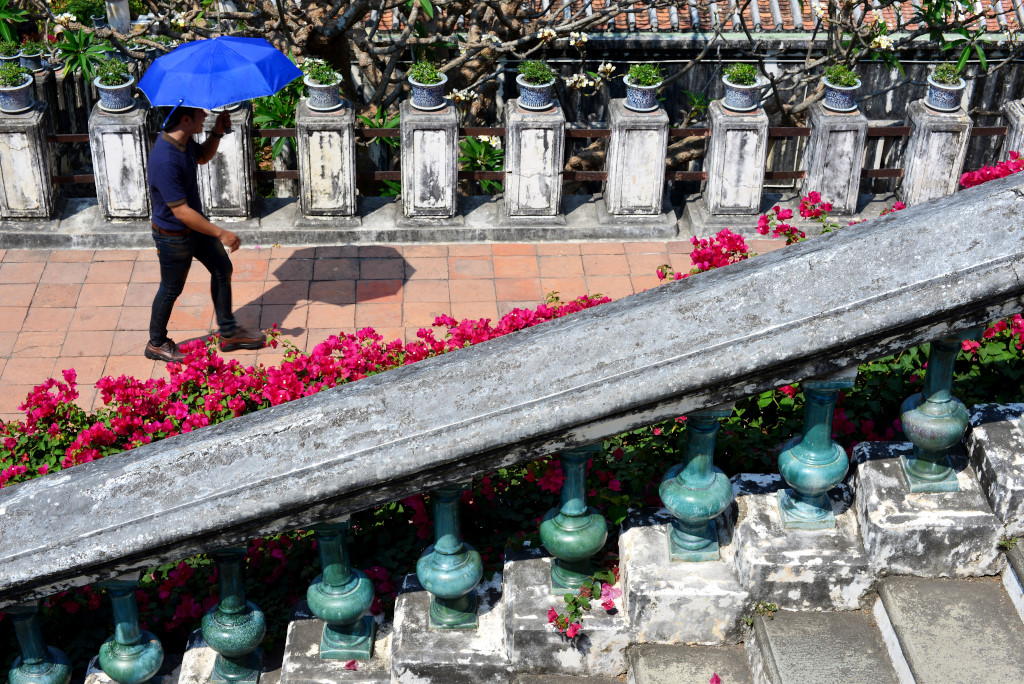 The unease at the monkeys’ proximity doesn’t dispel, even if the matrons attending to the food stands reach for their long bamboo sticks the moment one of the ever inquisitive macaques comes too close. I would rather escape to the other side of the street, although it only takes looking up from the glass window of the pizzeria to realize that some more macaques are strung along the power lines above me, about to leap onto me. Perhaps I could enjoy a respite from the intense heat at the eatery next door, well inside and out of range from the calculating monkeys … 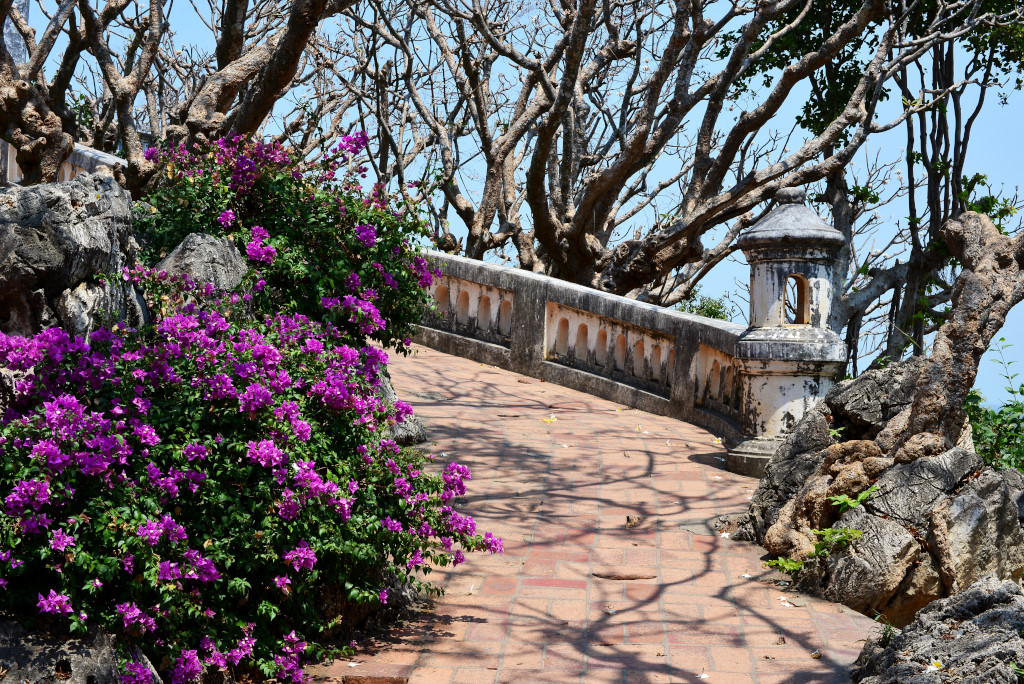 Now somewhat re-energized – and absolutely soaking wet with sweat – I cycle southward on the road that terminates at the Phra Ram Ratchaniwet palace, which doubles as a military base. This also implies catering to the whims of the slightly paranoid soldiers, such as the one at the entrance who threatens to blow his whistle and raise the alarm as I ride my bicycle towards him, since I did not obey his motioning to dismount. 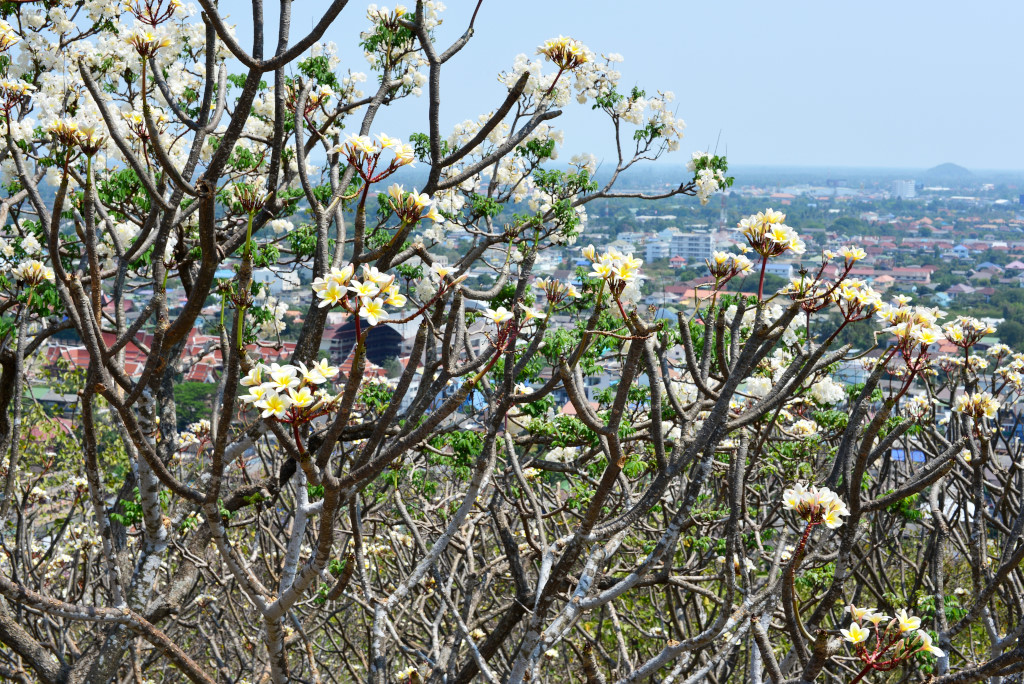 I always have lots of ample colourful language in store for such people, but I spare both of us the undue discomfort, given that my interaction with him will be at best be limited to a few brief moments. Having parked the tiny bicycle to the side, I walk past the boxing gym along the uniformly-sized tree-lined boulevard to the palace, a carbon copy of a 19th century German noble country house.

The exterior of the bulky country palace is a pale pastel yellow, with screened windows lining both levels of the structure, on one side arched, and on the other rectangular. The gently sloping gabled roof is blanketed with dark burgundy glazed terracotta tiles. At the entrance stands a cast iron statue of what I take to be Rama V next to a phalanx of embossed cannons amidst shrubbery, which soldiers from the local base are intended to be sweeping and trimming, although much of their time is spent texting and gossiping. 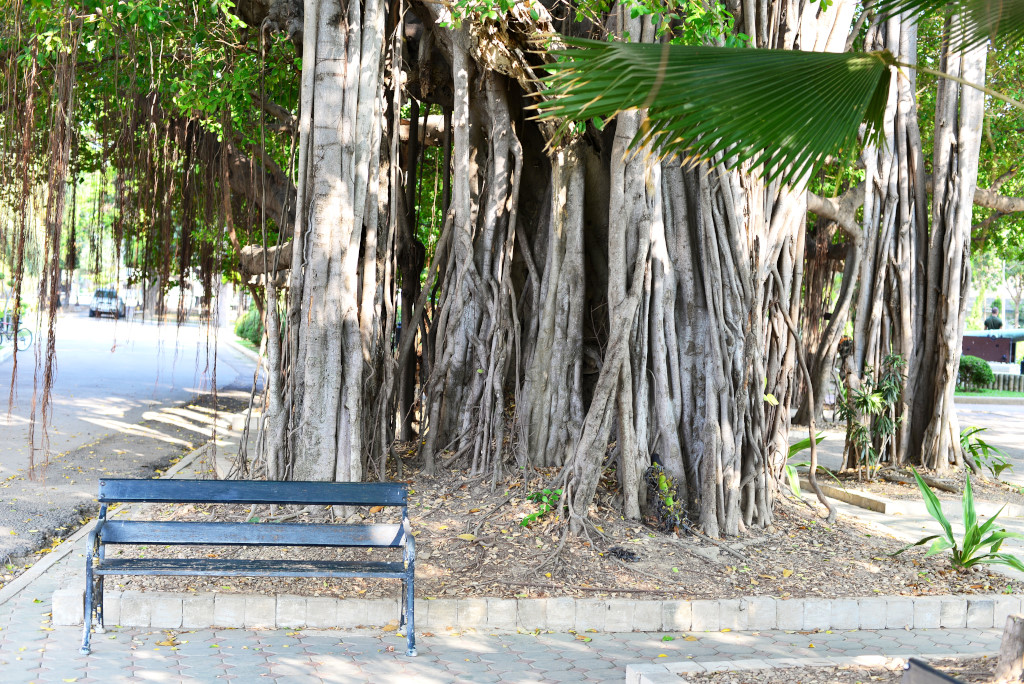 Curiously, a luxurious Mercedes is parked across the terraced plaza behind the palace gardens, the older couple toying on the lawn with the croquet set probably associated with the court in some manner to be able to afforded such privilege in this stern setting. 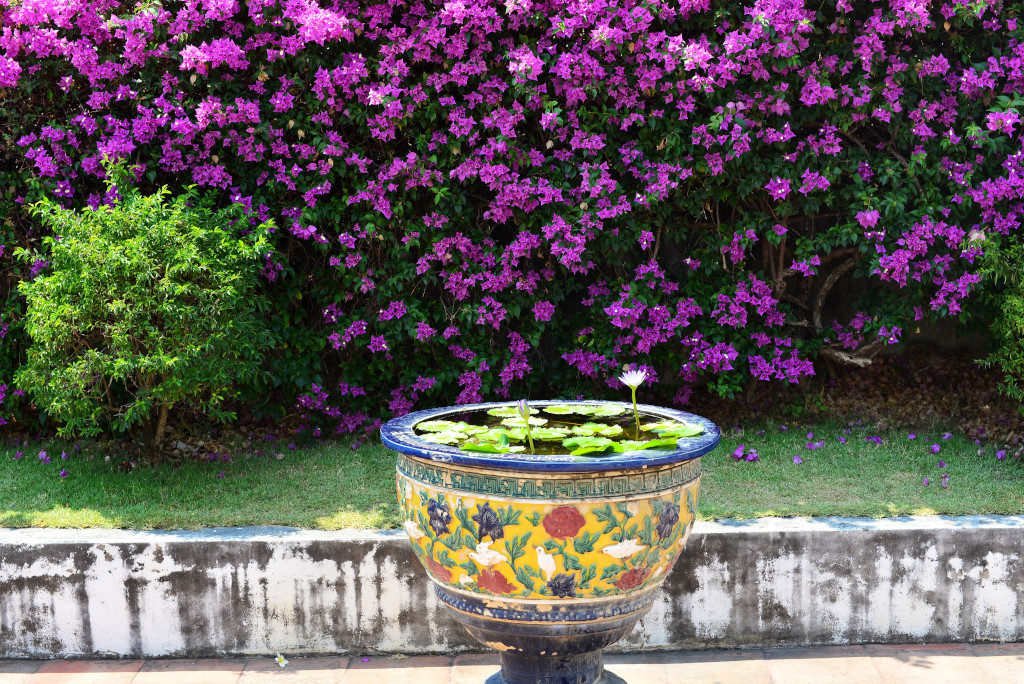 Inside, the visitor is greeted by polished parquet floors and cavernous ceilings, the central bedrooms and meeting halls flanked by adjunct service rooms. The essential austerity is embellished with imaginative architectural caprice that blends 19th century German architectural movements, such as Biedermeier, Gründerzeit, modernism, and above all Jugendstil, a fascinating pastiche that must be unique in this country, if not in Germany also.

Garishly oversized cherubs ride atop the glazed turquoise tiled columns, which flank the circular staircases that line the interior of the domed tower on one side of the structure. Here, as in the principal halls, the industrial sensibilities of the modernist coloured glass and wrought iron chandeliers contrast with the muted elegance of plush velvet and burnished wood seating arrangements. The strictly geometrical patterned balusters on staircases joining the two levels are whimsically amended with a slightly curvaceous detailing, elaborately patterned floral wrought iron lintels crowning some door frames, geometrically patterned fanlights others. 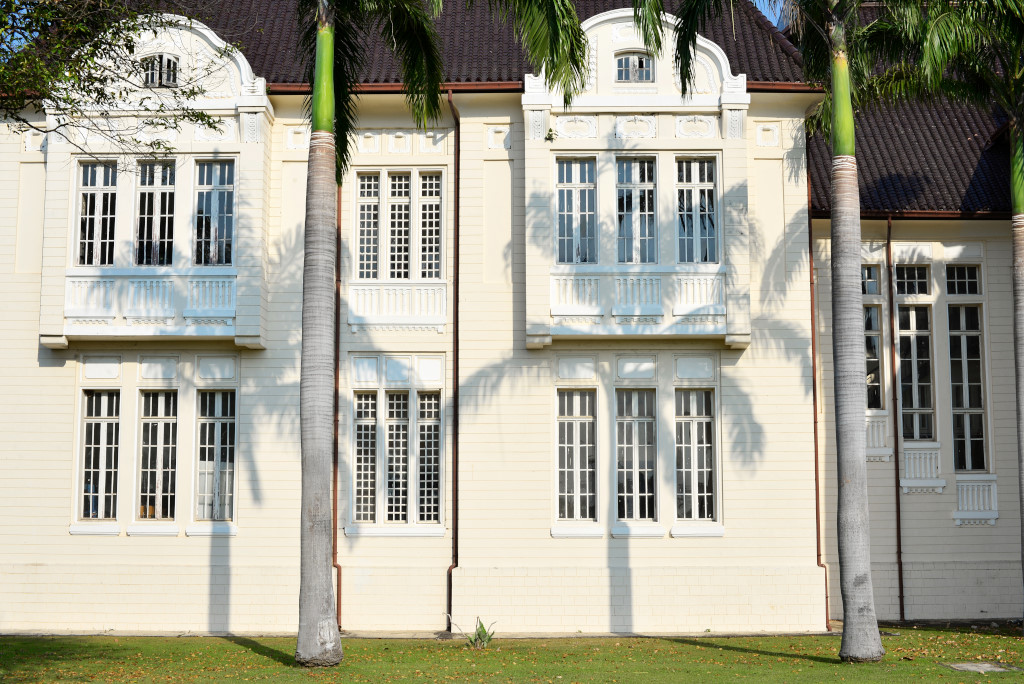 Coffering with continuous sculptural embellishments is introduced to the otherwise terse dark wood paneling in the king’s bedchambers, and across the hall, the queen’s bedroom is lined with fruit-embossed glazed tiles overlooking a dainty courtyard, in turn centred on a splashing fountain. Almost all the glass on display is clear, although in the study, stained glass stylized fruit lines the opaque windows. 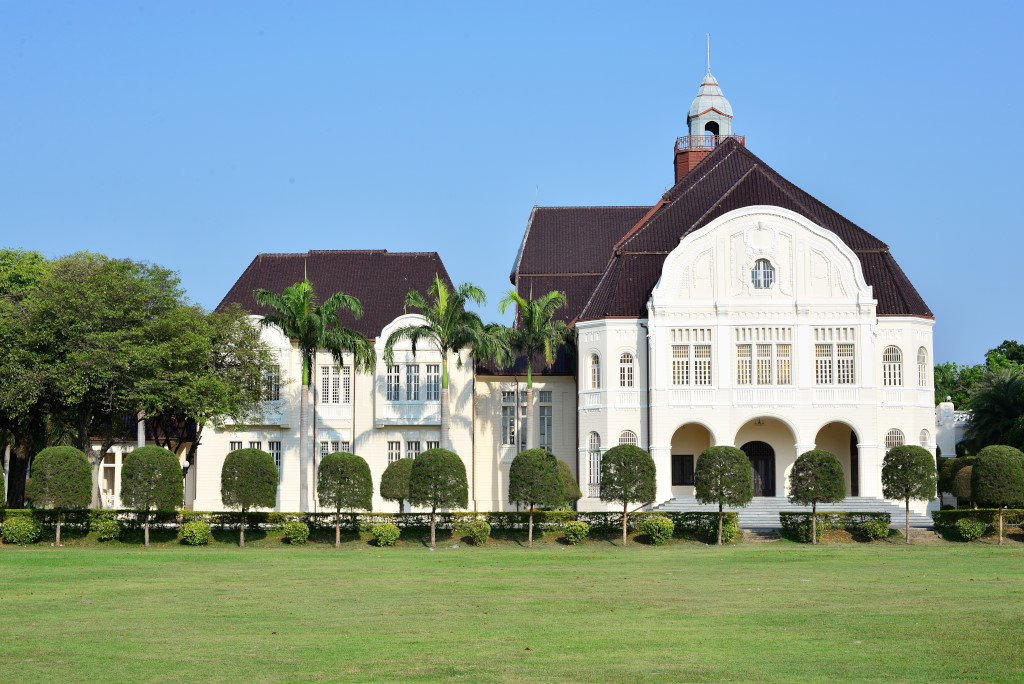 It’s really too bad photos can’t be taken of this palace so exquisite and unique in its sensibilities. Virtually no visitors are present other than a young Thai couple, who assure me that there are palaces of this style all over Thailand, although I somehow doubt it. They may have a more conventional European neo-classical feel, but not like this. 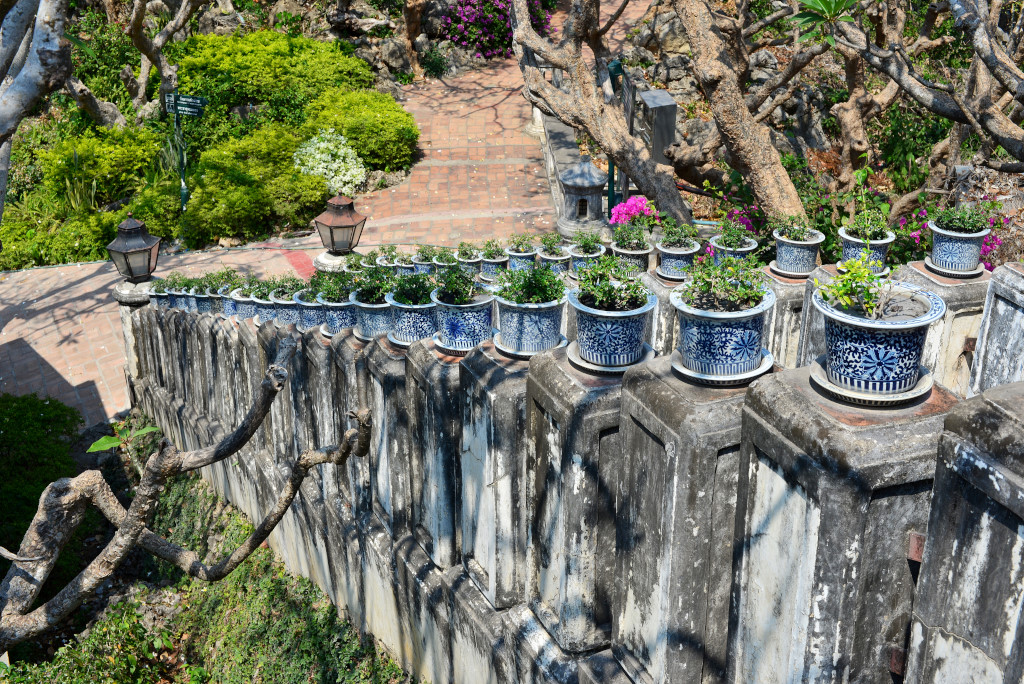 The day ends with one last trip to the night market, the owner of the 2N guesthouse recognizing me at the moment of passing me on her own bicycle. My aim is to try some more concoctions of the Muslim vendors, who are luckily still open after having plied their aromatic cuisine to sundry locals, most of the merchants having packed up and left for the night. 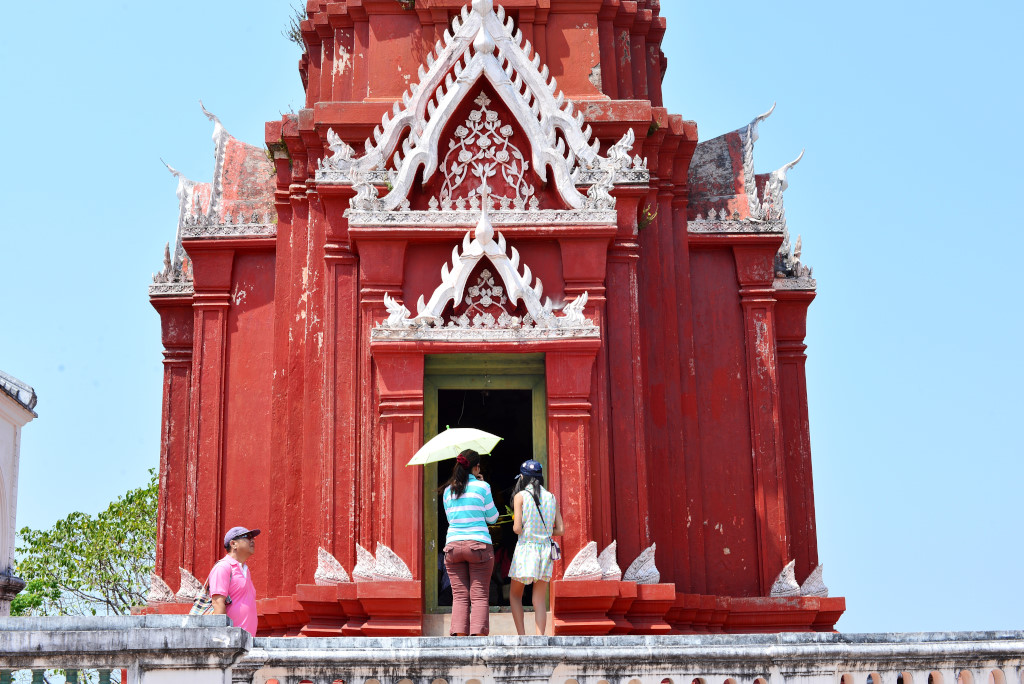 Strains of slow romantic music heralding another era emanate from the Christmas-light festooned park area adjoining the river. I glide from one illuminated patch of road to the next, past the chess players squatting under the halogen lights, the child soldiers have retreated into the base. I careen over the speed bumps until reaching the guesthouse, sliding the heavy steel door open one last time today, parking and locking the bike, then climbing back into my air conditioned nest. 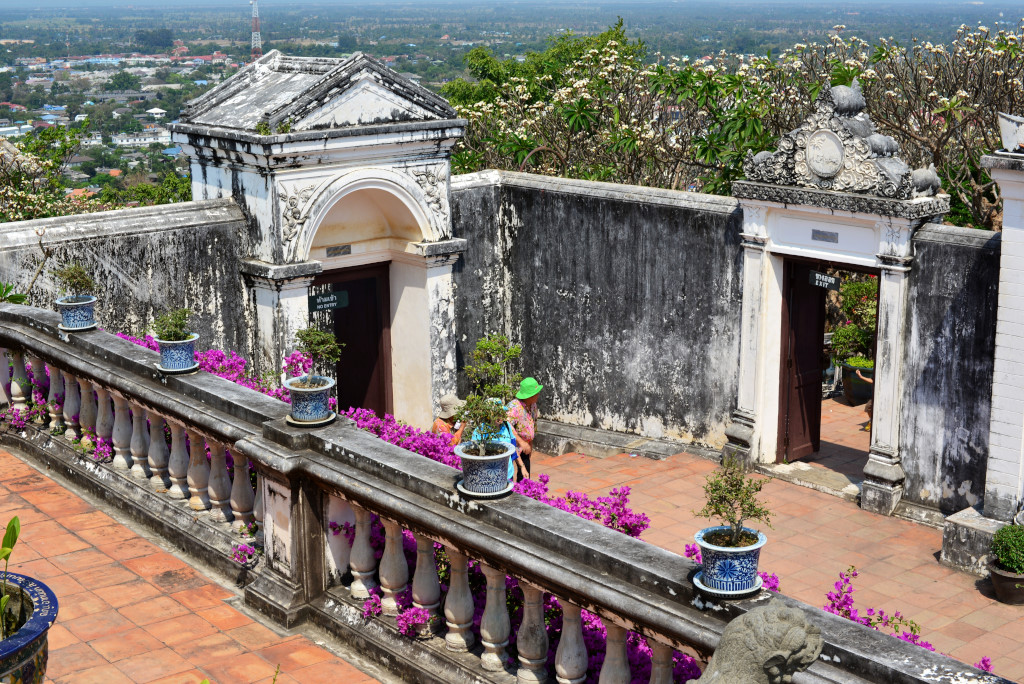 I am faced by a minor crisis when I find the contacts on one of the SD cards splayed out from their casing. For a moment I think I will have to spend another day in town, revisiting today’s sights and retaking all the photos I would have lost on the card, but happily, while the card can no longer be seated in the laptops SD card slot, the camera still accepts it. Since my new Nikon has two SD slots, I can copy the contents of one card onto another, and, well the rest is history …