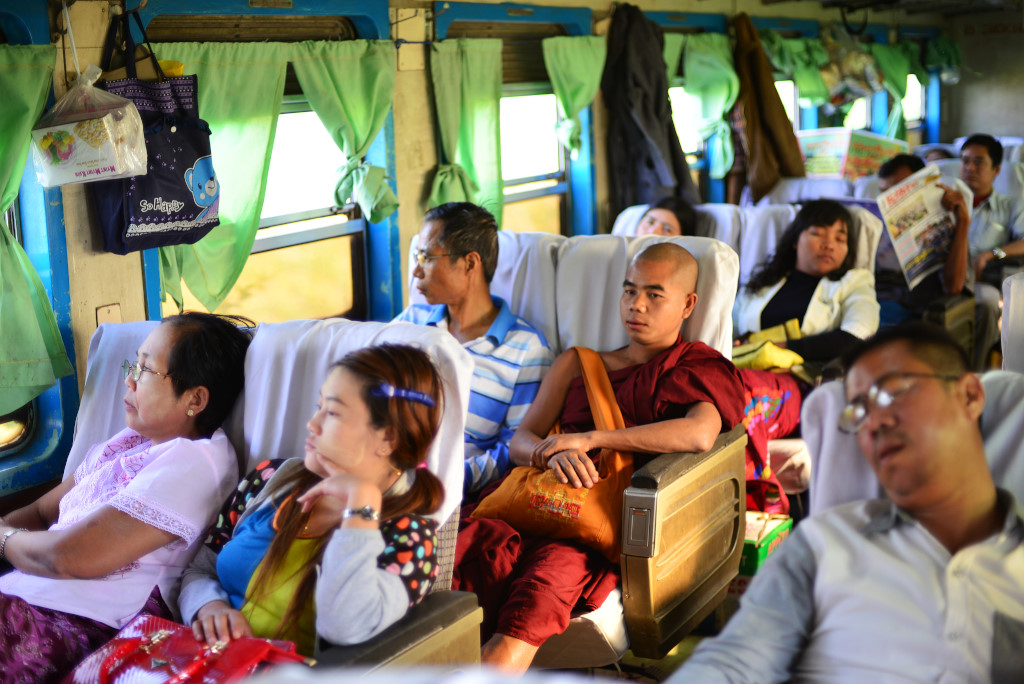 I join Aini for breakfast on my last morning in Mandalay. Initially mistaking her for being Filipina, it turns out the she is Indonesian from Jakarta, traveling through destinations outside her country in Southeast Asia, given that the Indonesian government has put a halt to the low budget carriers following the recent crash of the Air Asia jet originating in Surabaya. We talk about how there is so much to see in the region, but much of Southeast Asia is also overdeveloped, overly polluted, and excessively touristed, so she may have to be selective as to travel to. She is visiting some of the highlights, Bagan and Lake Inlay in Myanmar, Angkor Wat and Pnom Penh in Cambodia, and Vientiane and Luang Prabhang in Laos. It certainly would be interesting to see all those places from the standpoint of being Indonesian. 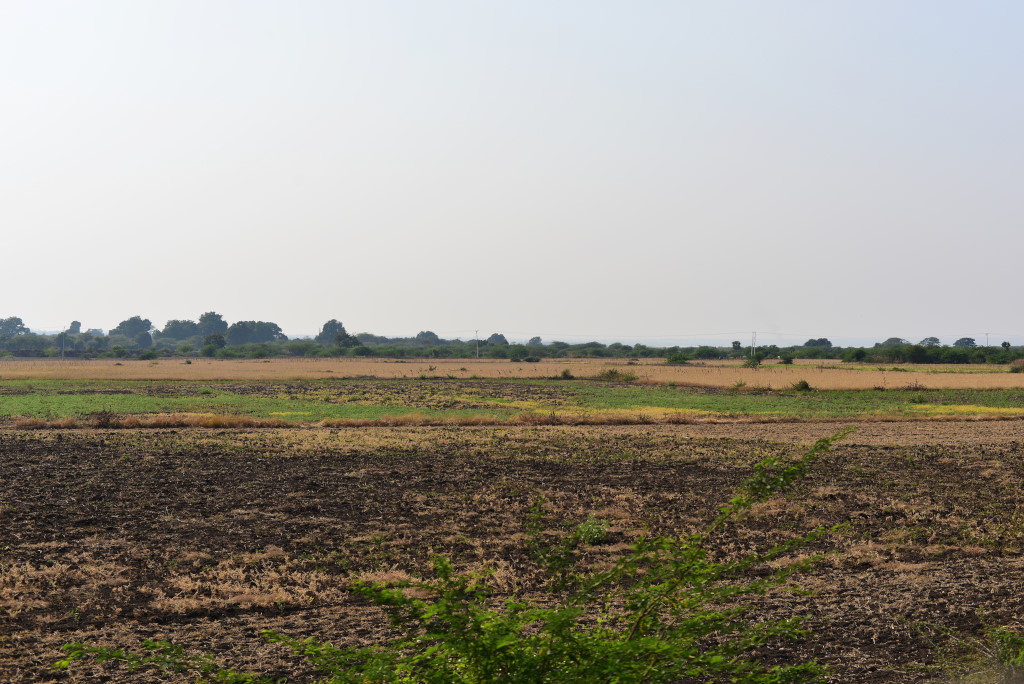 I speak broadly of my experiences in Malaysia, which elicits a somewhat curt response, given the perennial animosity between the two countries, with very different interpretations of similar cultures, to say the least.

She would like to spend the day in Mandalay in a way that she can experience the city in an organic fashion, rather than having to rush through the obligatory tourist attractions, particularly on a tour, which she took in Yangon and found annoying in the way that it prescribed the manner in which visitors are expected to experience the place. 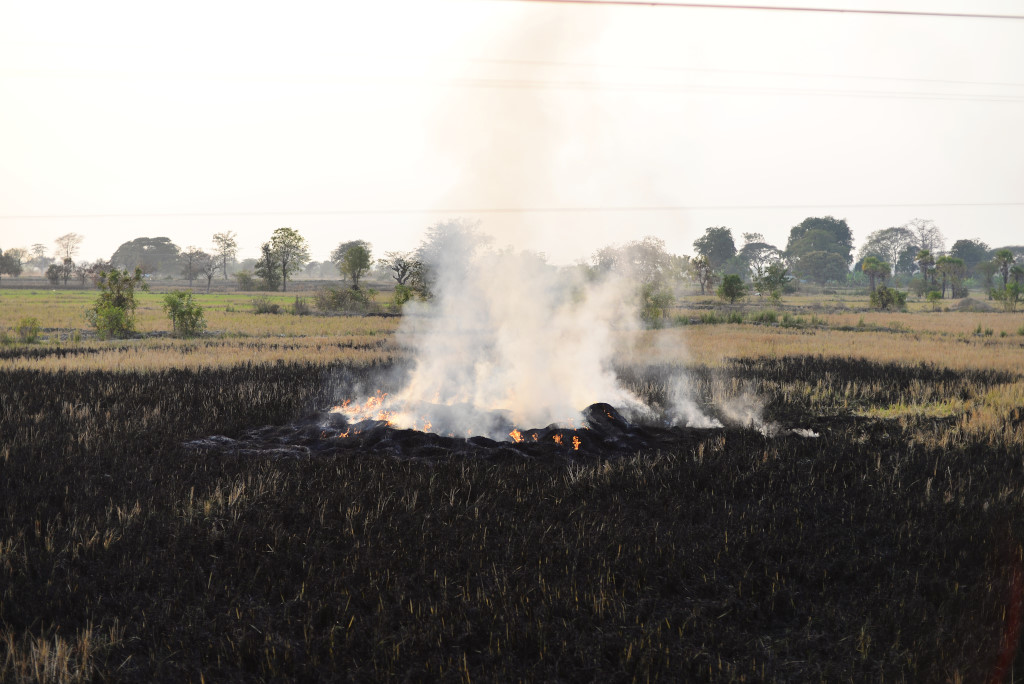 Her concern applies particularly to the Buddhist pagodas which interest her from a spiritual perspective, but she doesn’t want to partake in visits to these religious sites in the same circus-like fashion as so many other tourists. I recommend that she rent a bicycle and tour the immediate city core to take in the general ambiance, although the Golden Palace and Golden Temple really are must-sees in Mandalay. 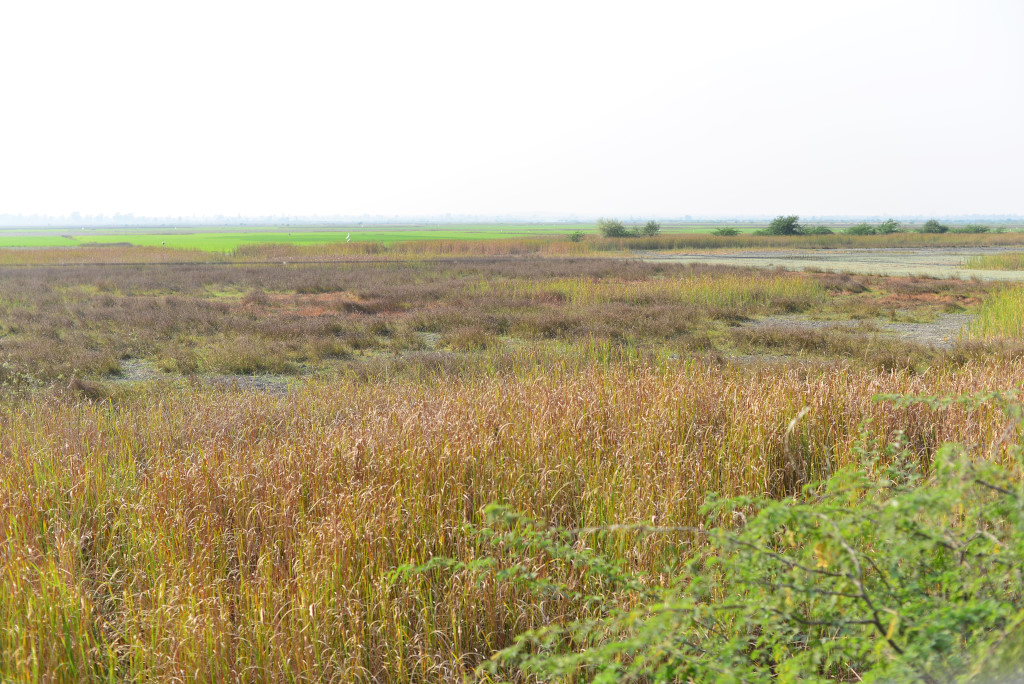 The idea of rushing to the station to catch the train is of course absurd, given that the wait for the train runs into the neighborhood of an hour and a half, and then another equivalent amount of time before we actually depart – not that I was expecting incredible punctuality. Passengers camp out on the platform with massive amounts of baggage. Next to me is what I take to be an army volleyball team, based on the lettering emblazoned on their jackets, the Burmese men liking their participatory sports in a big way, especially rattan ball and soccer.

A major female showdown occurs next to me at one point, a large group of women converging and immersing in a heated exchange between a few of them, which happily eventually dissipates with no eyes being scratched out.

No one rushes the train when it pulls in, as would be the case in some other countries, not that specific seats haven’t been assigned.

‘Upper Class’ is quite the euphemism – I am not sure how the run-down reclined seats in the compartment earn the designation. Perhaps because of the fact they have a larger pitch than the conventional class or are in fact reclined.

One woman with a hoarse voice and aggressive disposition commandeers her porters to jam boxes and bags behind every seat next to a wall as well as underneath individual seats, the diminutive uniformed Myanmar Railways employee deferentially responding to her every instruction. 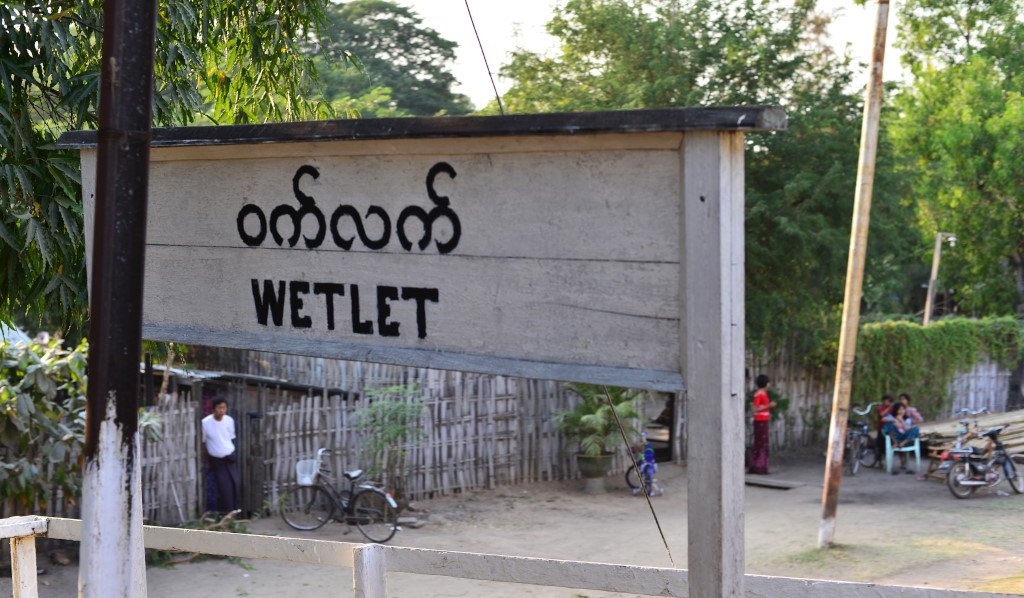 The wait continues as the initially fairly empty car gradually fills up, and then with a lurch, we rumble out of the station. A torpor overcomes me as we slide past the deep foliage and wooden bungalows, the pagodas abundant in their shimmering creams and golds, as much as I would expect so much religious prowess, I am nonetheless quite impressed by the landscape running to the north of Mandalay. Until we slowly approach the river and the familiar site of the new and old bridges appears before us, and the hills of Sagaing to the right. How is it that we had been heading south through Amarapura instead of going north? My suspicion is confirmed – the railway line running north actually follows a route to the Sagaing bridge to the south before crossing the river and being able to proceed to the north again, following the western flank of the Irrawaddy. 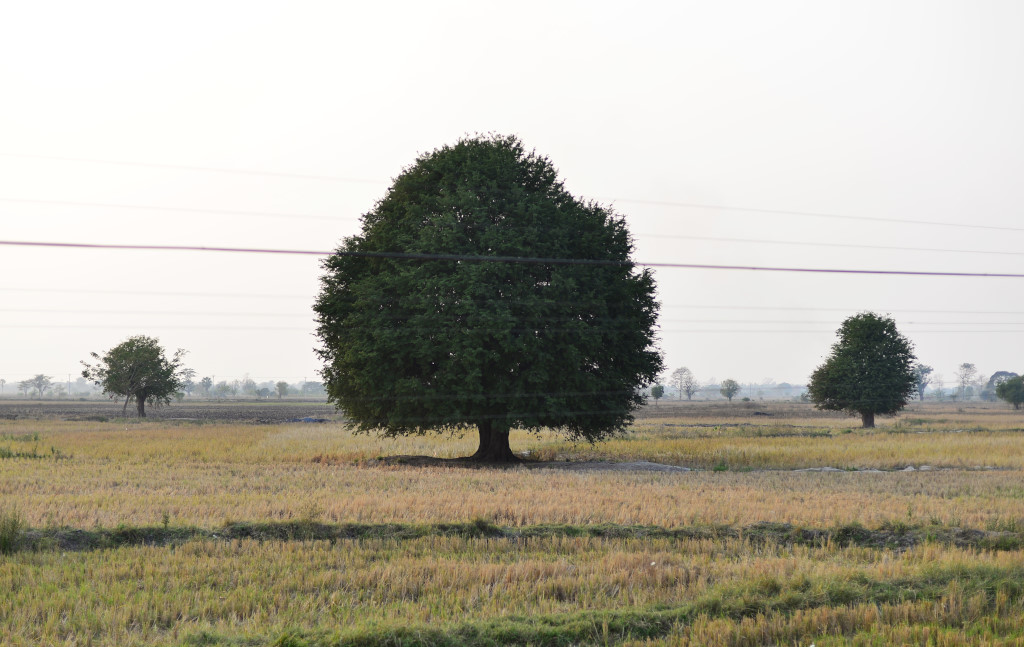 The train is fairly grimy and old, curtained windows all open, fresh air pouring in from the countryside, except when we approach the small garbage-strewn towns with the concomitant stench. And the experience of riding in the car would be excellent if it wasn’t for the fact that we are rocked violently back and forth much of the trip. 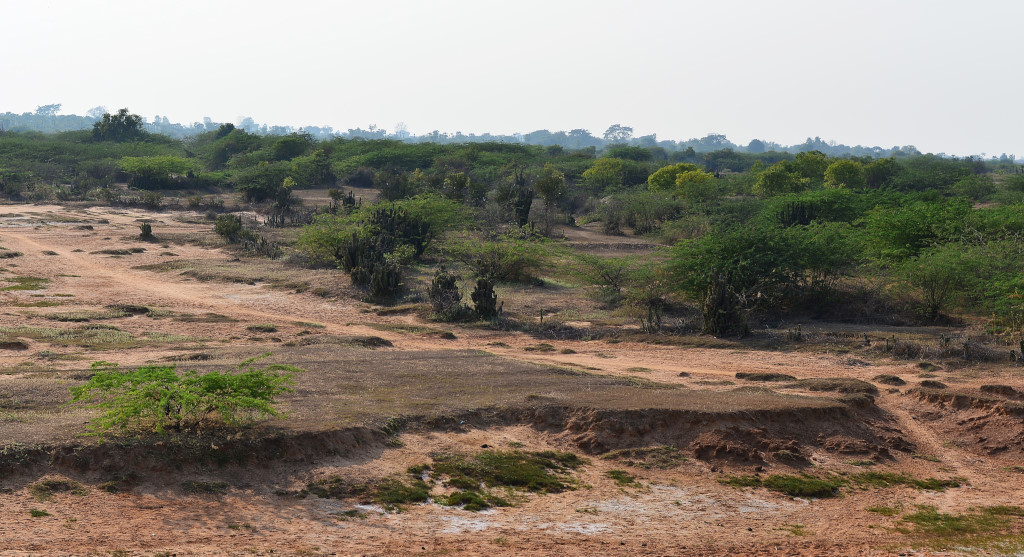 I remember taking the train from Mandalay to Pyin U Lwin almost 20 years ago, and 3rd class was basically a cattle car, with livestock and people climbing over each other, and passengers lining the roofs of the cars. Vendors pass continuously through the carriage offering all manner of foods that don’t look that unappetizing, which make me regret having brought so much food on the trip, especially the cordials, which are essentially syrups. Their offerings include peanuts, rice with curried meats, packaged snacks, banana chips, some bagged milk preparations, water, beer, and steamed corn. Many of the food vendors are strikingly beautiful and very well-shaped women with handsome faces almost always made up with the tanaka face chalk. 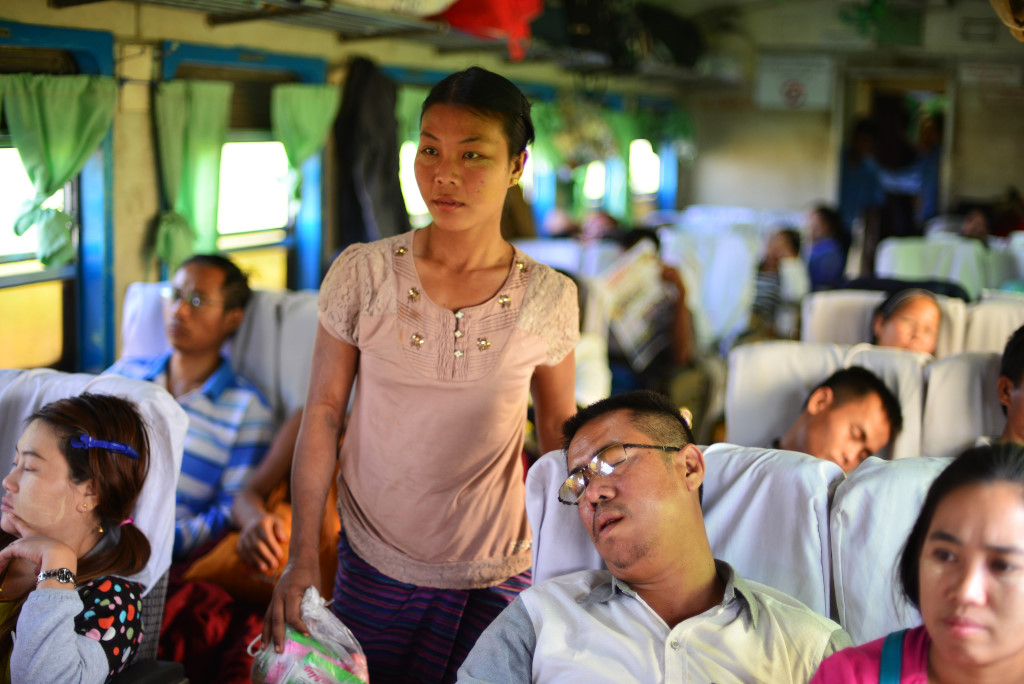 An older and younger monk share a bench, the younger one eventually clearing his seat for the older one to have more room to rest. Eventually the older one also takes a break to the interleaving passage, seated next to the toilet, where his otherwise impassive look is interrupted when he grabs hold of my arm and with beaming enthusiasm exclaims ‘Sportsman!’ which he does again on my way out of the toilet. 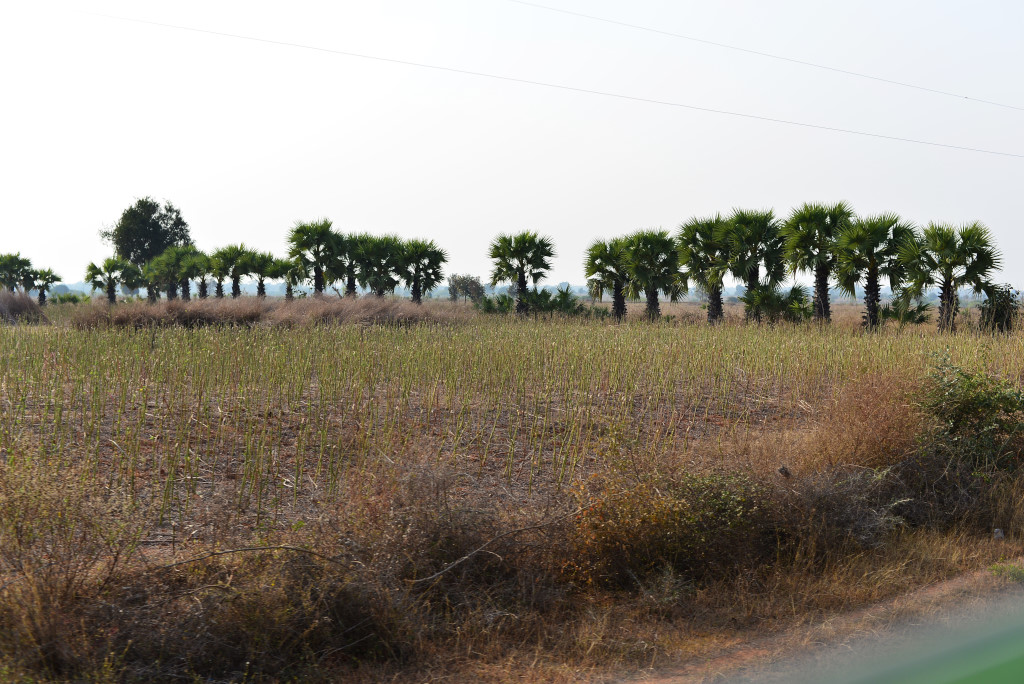 The ticket inspectors make frequent appearances, the one older man busying himself with the most minor passenger request. Occasionally a handful of uniformed police officers in blue parades through the carriage. 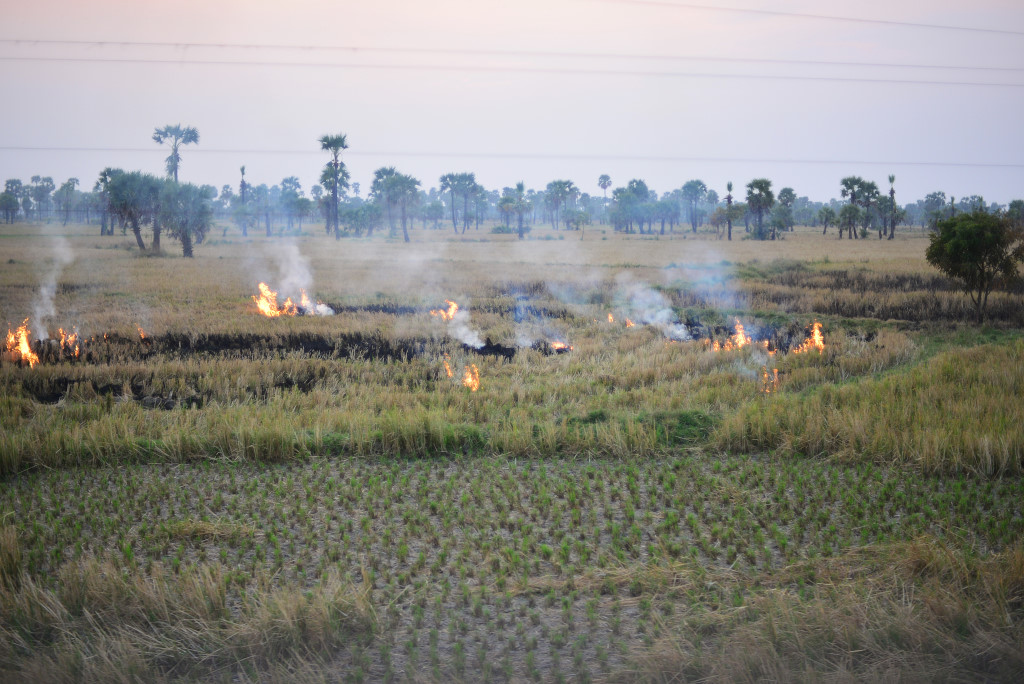 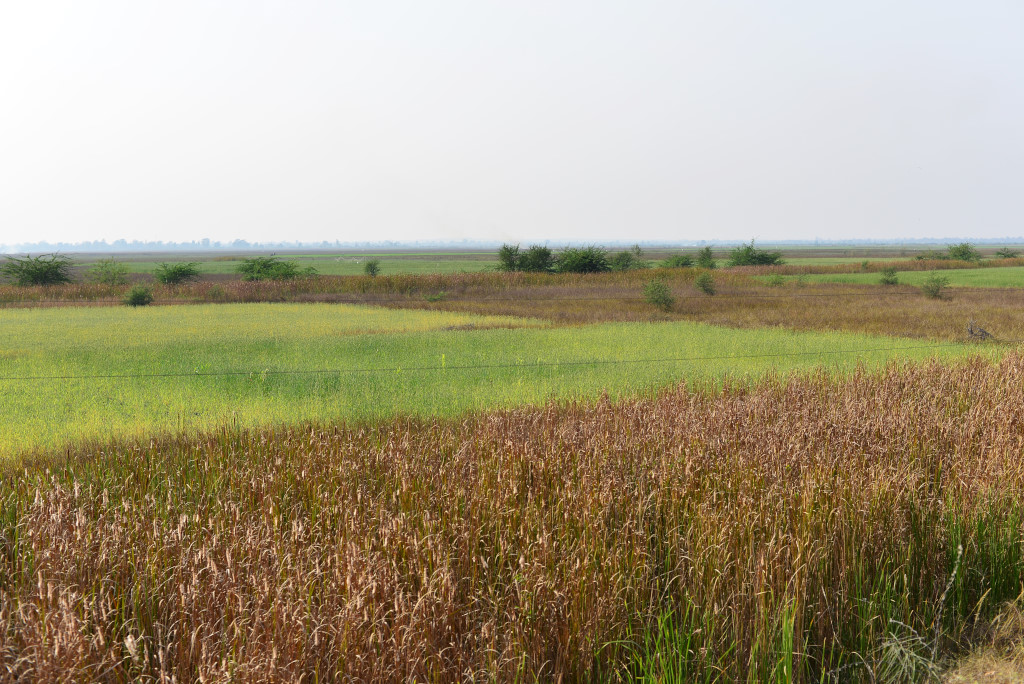 Beyond the radiant confluence of Amarapura and Sagaing, the landscape is flat and dry, the fields largely fallow, with occasional scrub and small tracts of forest. The air is clear, and even the area to the south of Mandalay is beautifully sunny, so much of a better day to have visited than the day I went.

Beyond Mandalay there is very little in terms of settlements, small towns consisting mostly thatch houses with geometric patterns, very bucolic but poor. Occasionally we see someone on a motorcycle the train passes, and groups of people wearing the typical flat conical Burmese bamboo hats working in the dry fields. 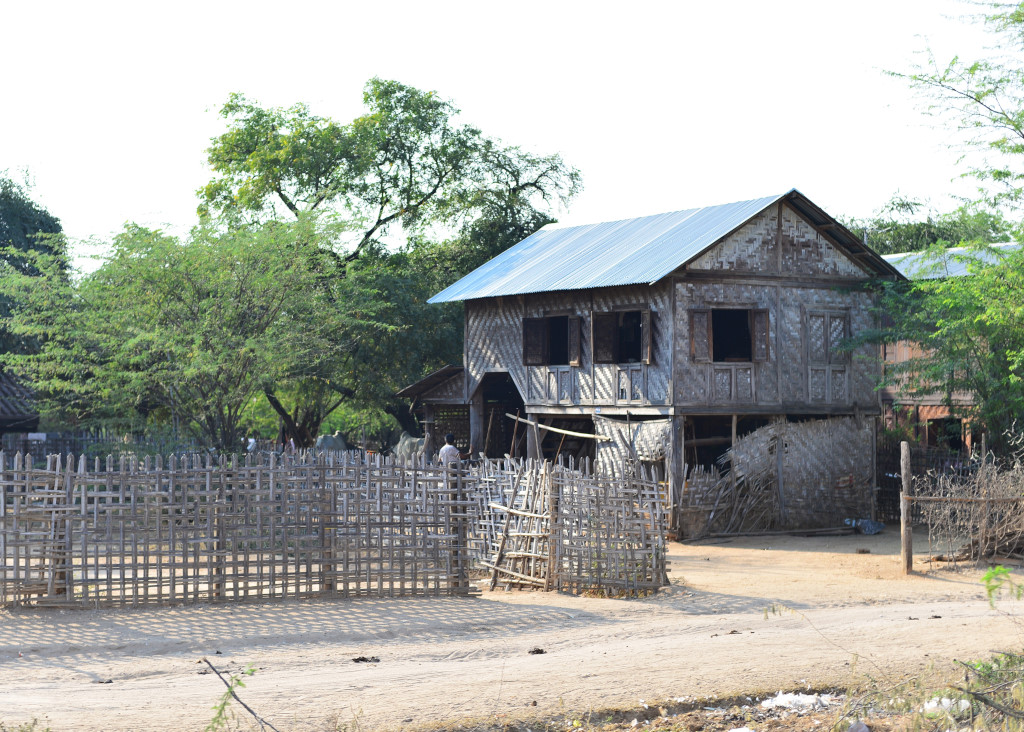 On and off, small plantations of sugar palm appear.

We don’t stop in very many town, about one town every hour, sliding slowly into the train station, a clamor erupting among the vendors shouting the names of their wares at us.

We don’t travel very fast – if we did, the train would probably derail. And there must be a good possibility of derailment, considering how violently the train cars swing back and forth or jump up and down. I wonder to what extent the engineer is moderating the train’s speed to take into account the more challenging sections of track.

On the other hand, boat travel from Mandalay to the north along the Irrawaddy would probably take many more days. Happily, no smoke pours through the windows of the locomotive- perhaps it is electric? 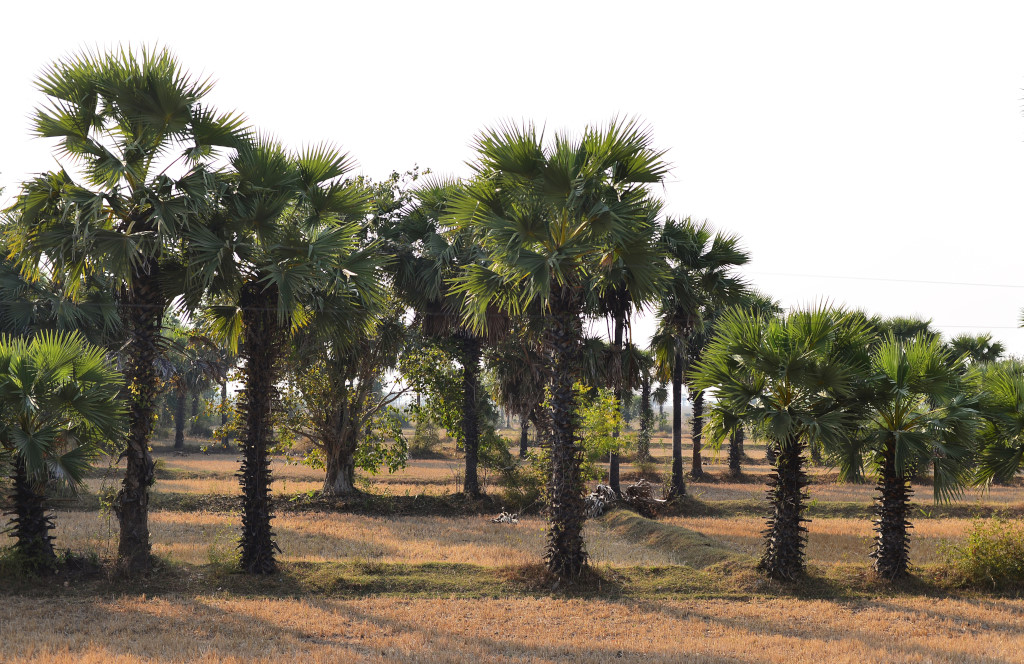 Looking into the ‘Ordinary Class’ wagon next to ours, I see wooden bench seats that seem vaguely familiar. I can’t even imagine spending the night crammed in on one of these. The cars don’t really smell badly, but when the toilet door opens, the stench really seeps out, although everyone is pretty good about trying to keep the door closed, even though that involves often throwing the entire body weight against the door. 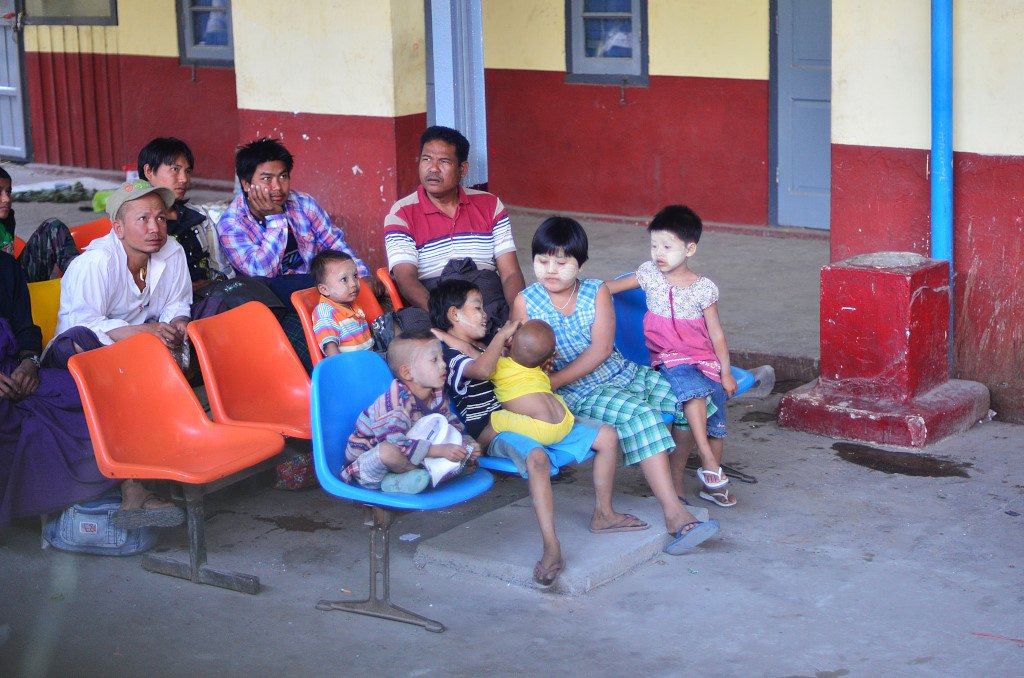 The vendors on the train are typically small and dark, very handsome and kind. And yet these people are in the prime of their life, making their living selling snacks to train passengers, shouting the names of the wares they offer to passengers as they troll the train compartments for hours on end, invariably selling next to nothing. 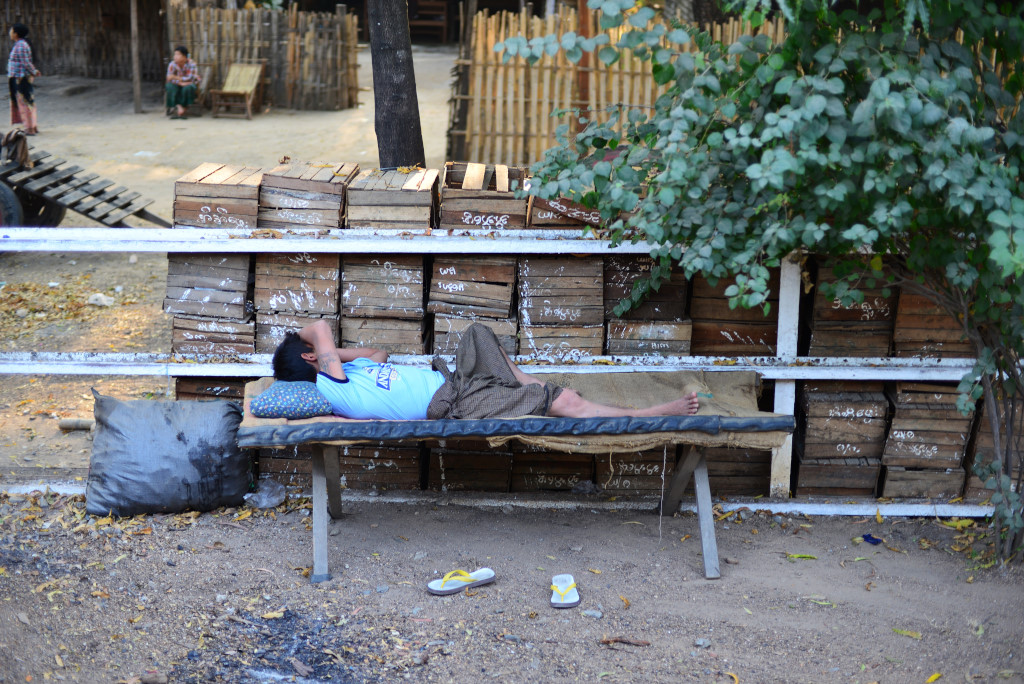 On the photos I try shooting of my fellow passengers, people largely don’t look very thrilled at being cooped up in this gyrating train, not that I would blame them. However, they do burst out in laughter in unison at the ridiculous degree to which they are thrown in the air at the train’s violent and rhythmic lurching. 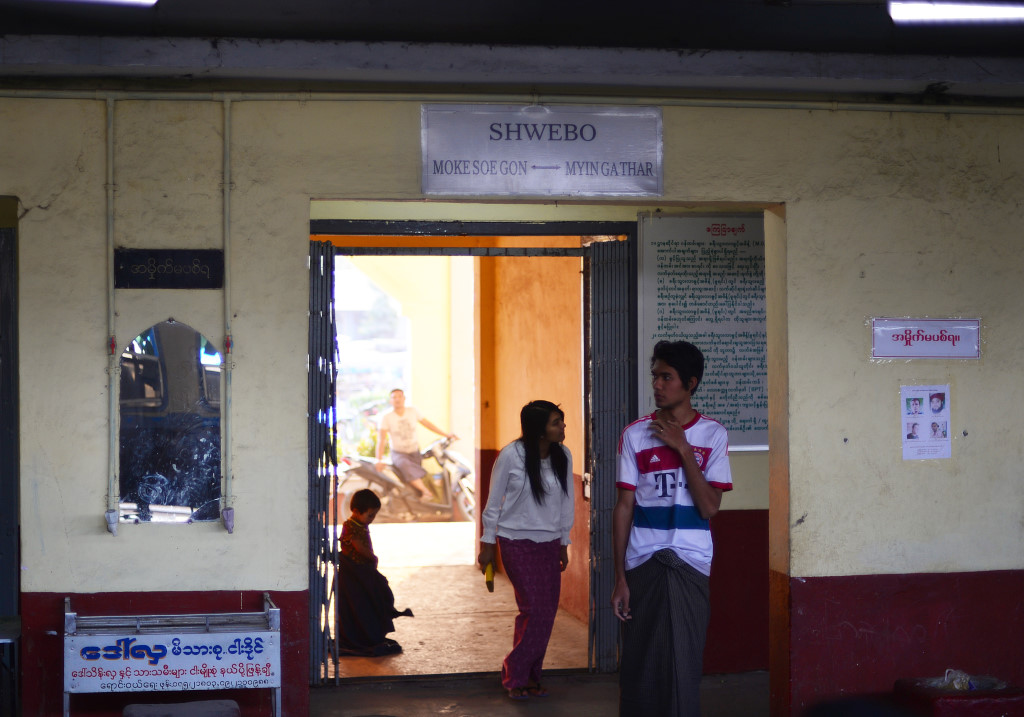 As the darkness progresses, I see my fellow passengers dragging blankets out of nowhere, the monks rearranging their extensive cloaks to cover their entire body, most passengers now wearing toques and jackets. It is still very comfortable, but can see that as the night progresses, it will get cooler and cooler, especially with all the windows on the train open. The lights stay on in the evening, and unfortunately are not turned off at night. 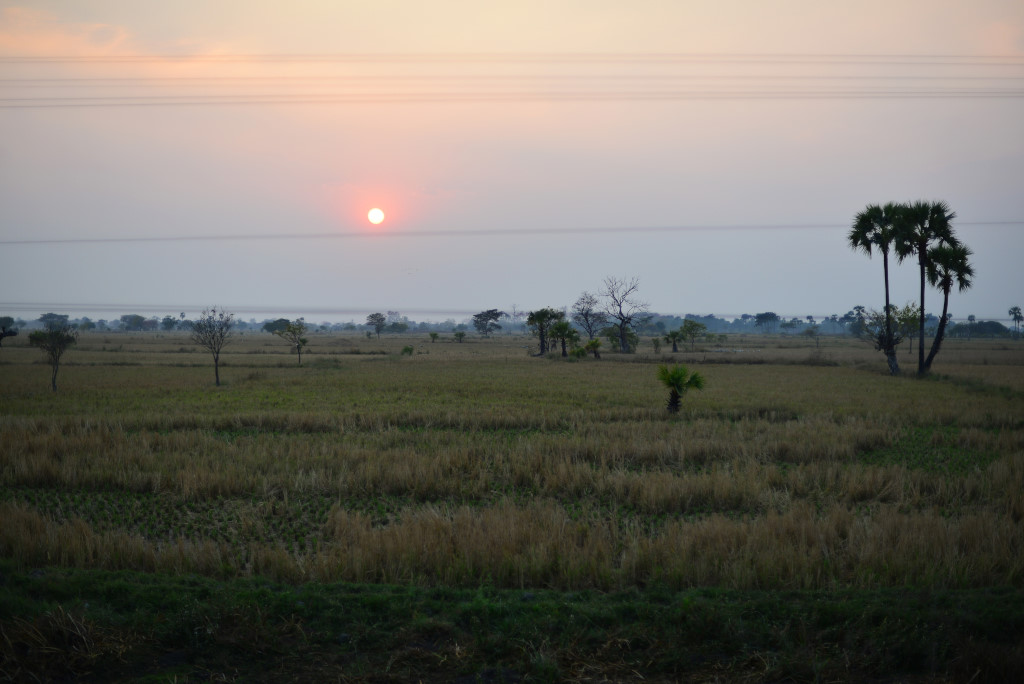 The vendors that had been parading through the train during the day are gone by the evening, as if by tacit agreement to leave passengers alone at night, or perhaps because the chance of selling anything diminishes substantially. I am at the moment not so worried about not getting much sleep at night, since I slept for much of the daytime portion of the trip, barely being to stay awake with the train’s heavy rocking motion.

I scratch my arms frequently, as if I must have picked up flea or mosquito bites somewhere. It couldn’t have been at the Fortune Hotel, as it was quite clean. I am just hoping that when I check into the hotel in Myitkyina it will be decent enough to allow me some rest. 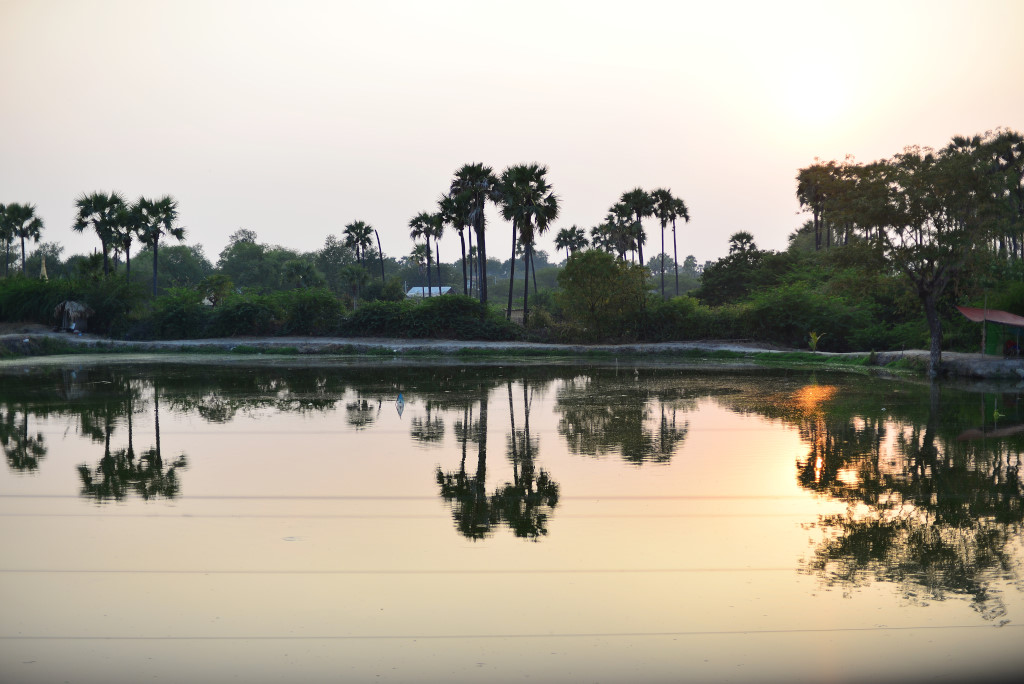