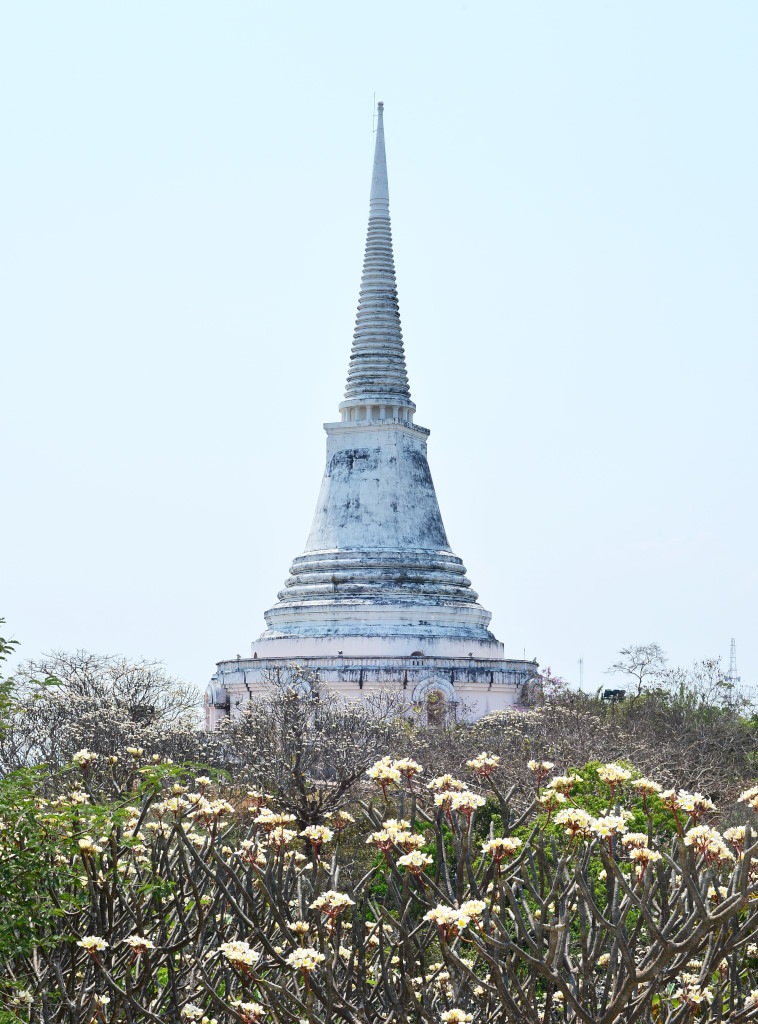 One last trip to Hua Lamphong train station on the MRT, full of the usual detached, cell-phone obsessed passengers, the air conditioning a reason in and of itself to take rapid transit in Bangkok to nowhere in particular.

A smattering of backpackers compliments the largely Thai working class passengers at the train station waiting to leave for their respective destinations. Today’s train ticket is relatively expensive, but then I think I am traveling in an elevated class.

With one hour to wait, I may as well visit the expensive cafe upstairs, where the deeply tanned European backpackers are holding court, the coffee is strong, and the croissant terrible.

An older Dutch man recounts his life disappointments. Earlier in his life he built a very specialized business in Malaysia, that upon the inception of the Bhumiputera laws was mandated within relatively short order to integrate Malays into a business that required highly specialized medical training and education. He – probably like many of his contemporaries – abandoned the country, and moved to Singapore.

He appreciates my sunny descriptions of his native country, but he would never consider moving back to his home town of Rotterdam, given that it has been completely overtaken by Muslims.

It is true that non-Dutch make up half of this amazing city, but the country at large only has a population of about 5% Muslims. Then the Muslim Moroccan-born mayor of the city is hardly the poster boy of Islamic fundamentalism, given the Dutch liberalism and pragmatism that he embraces. It is entirely beyond him how the Socialists that ran the country could justify ruining his country in this manner, but the Netherlands is a country he no longer has much hope for. As such, he is content to live deep in the countryside in the centre of the country, where he can live in the green, relatively undisturbed. As far as living in Malaysia is concerned, the Malay people were never uniformly Muslem until Mahathir Mohamad introduced the Bhumiputera laws. 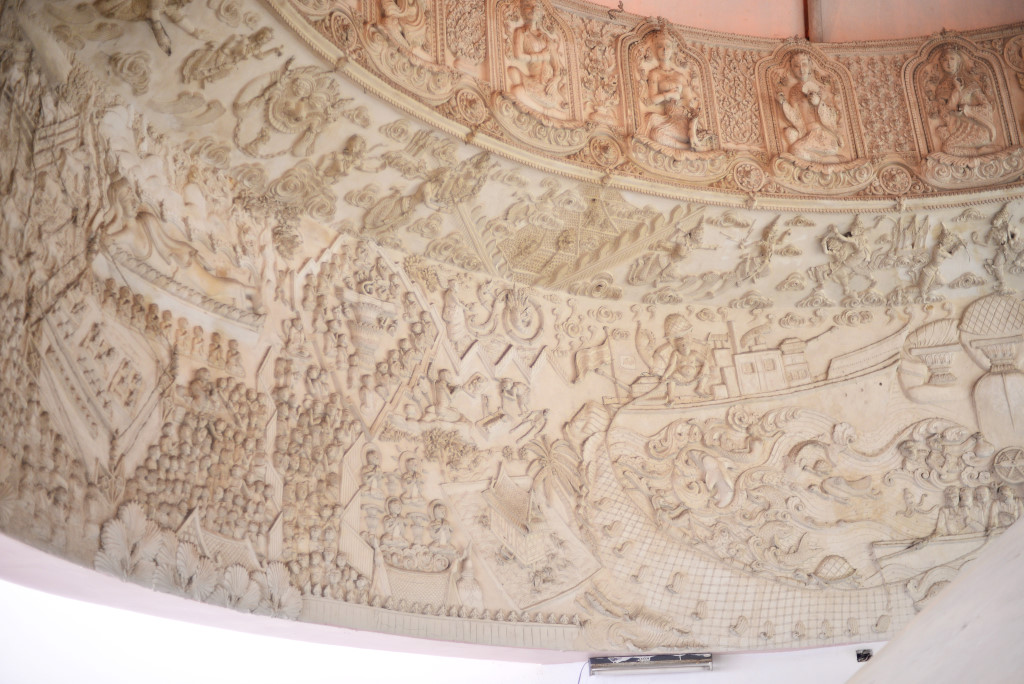 Comfortable bucket seats that can be reclined, rotating ventilators, and windows that can be fully opened – what more can one ask of from a train! My French compatriots seated behind me are off on their whirlwind first trip through the country, en route to Hua Hin, but somewhat perturbed by the fact that the train has still not departed. And it probably won’t for a while, I tell them, given the experience I had last time I left the city by train, although I am secretly hoping the same fiasco doesn’t occur. 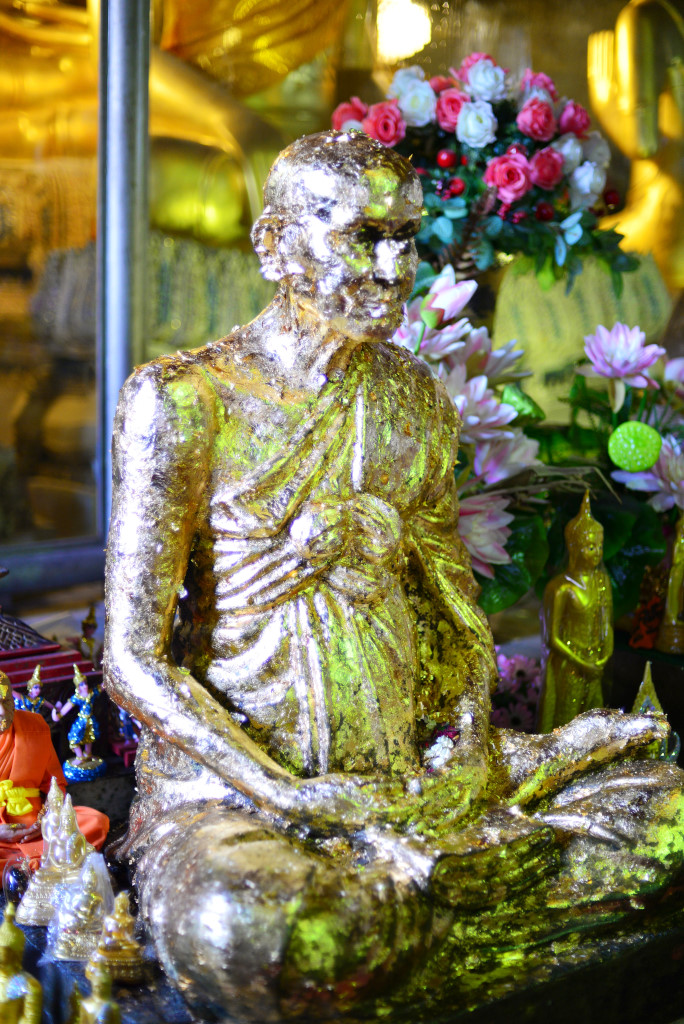 Our boredom is alleviated by the continual parade of food vendors passing through the train, although I balk at paying the relatively high food prices, especially considering that we are traveling to a far less costly region of the world. At least you won’t starve on the train, I tell them, although on the other hand, you wouldn’t necessarily want to eat all of the food being offered. Compared to French food, of course … the woman looks at me sadly, telling me she could really use a good Camembert. While a lot of European food products are available in the larger food stores in Thailand, the quality offered is low and relatively expensive.

We arrive in Bang Sue station, and it occurs to me we are actually heading north rather than south. I panic slightly, thinking we may have gotten on the wrong train, but the man behind me assures me we are in fact heading towards Phetchaburi. Enormous pylons being erected along the train tracks indicate the degree to which the city is investing in expanding rapid transit, to the point that it will blanket the broader city, which is almost unthinkable for any city in Southeast Asia other than of course Singapore. Rapid transit is far more costly than the bus here, but then the quality of transport is far superior and faster – and judging by the crowds on the MRT and BTS, it hardly lacks customers. 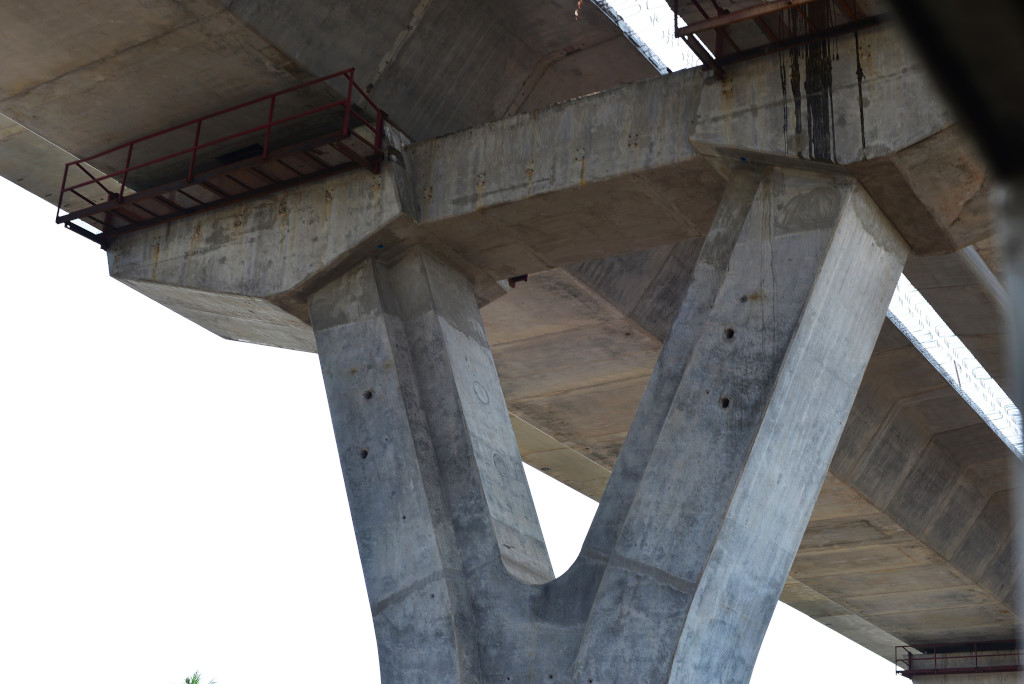 The train eventually arcs to the west, through characterless swaths of concrete mixed with ramshackle residential dwellings, crossing several canals, the broad Chao Phraya river, and then finally southward, stopping occasionally at some brand new train stations before gathering momentum and in finality leaving the confines of Bangkok.

We merge into the green countryside, replete with cropland and orchards. My initial protestations about not wanting to buy the food on the trains changes as my stomach begins growling mercilessly, the French mocking me for my inconsistency. Given what I have done to my budget, I will have to save half of the Styrofoam container with rice and tasteless fried ground chicken for later in the evening, the Frenchman instructs me with a knowing look. As we pass from station to station, the formerly empty train fills, later on in the trip almost every seat taken.

The failing afternoon light signals the imminent arrival of my destination, waking up from the heat-induced stupor, putting on my shoes, and politely pushing aside the milling locals as I swing my enormous and very heavy backpack from the upper rack, indiscretion being vastly preferable to the possibility of giving a fellow passenger a concussion. 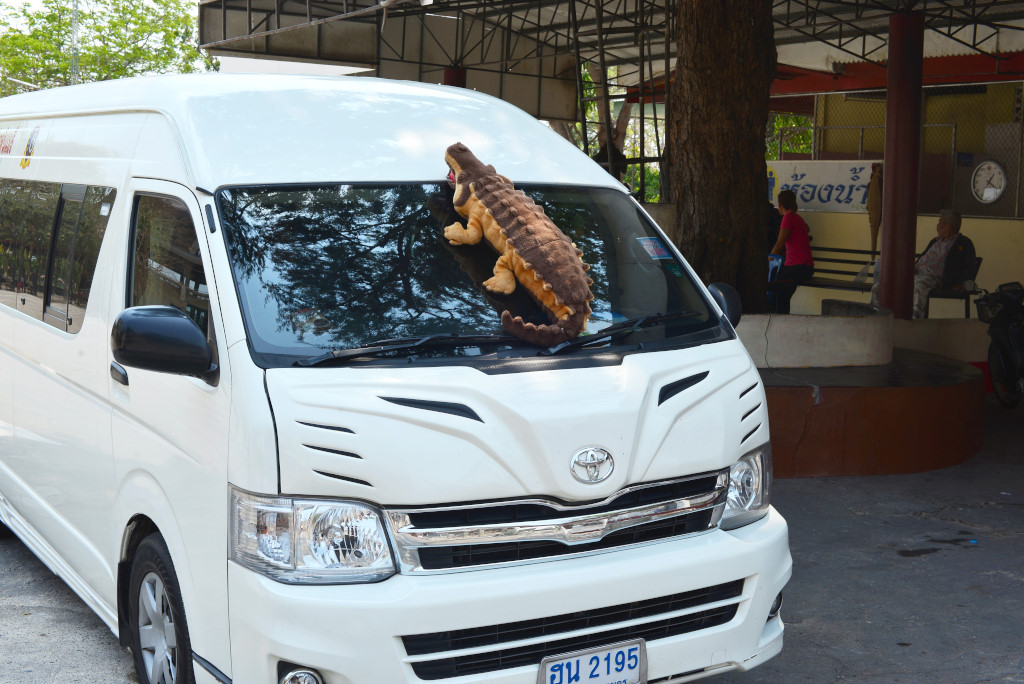 The familiar sight of small-town Thailand greets me, no one in a particular rushing to go anywhere, the few taxi drivers at the station not even vaguely pushy, one engrossed in a discussion over price with an English couple who have missed the last public transport to Cha-Am for the day. I can’t get a straight answer from the other beaming taxi driver as to what it would cost me to get to my guesthouse, so perhaps I should just take a risk and walk there myself, under the ultimately mistaken assumption that it can’t be too far, at least according to my hastily scrawled map. 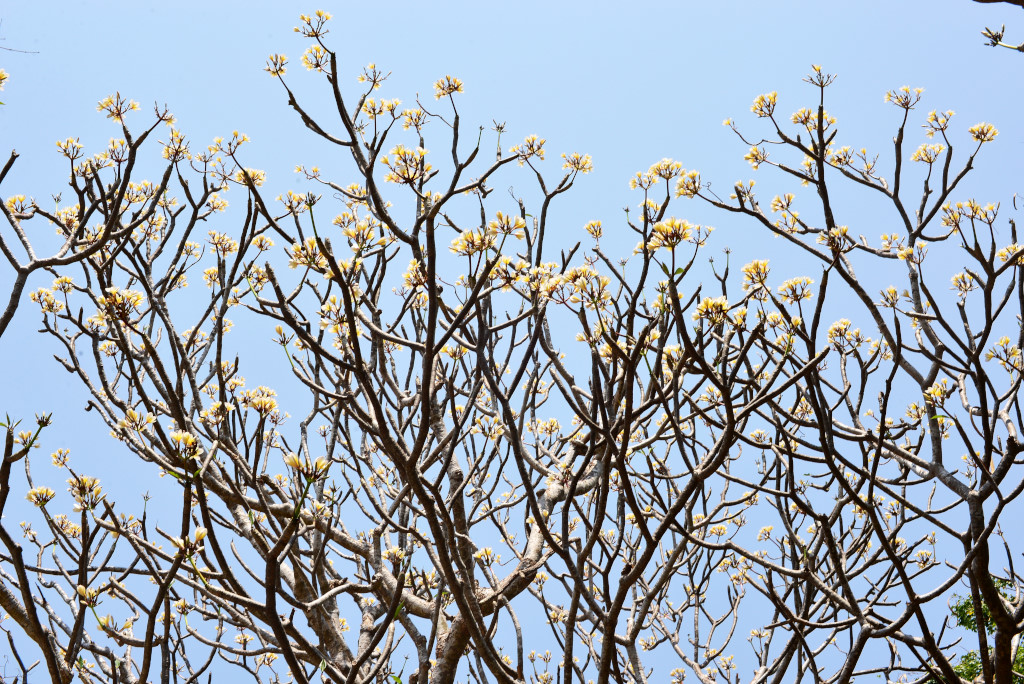 Exiting the train station, the town does not exactly come across as profoundly ugly, but there is definitely nothing memorable about it, certainly not here, and even less so crossing the tracks on the road running to the north. Women seated in front of their nebulously purposed establishments dismiss my questioning ‘Thanon Ratchadamnoen’, although judging by the position of the sun and the roadbed relative to the train station, the direction I am heading can’t be wrong. 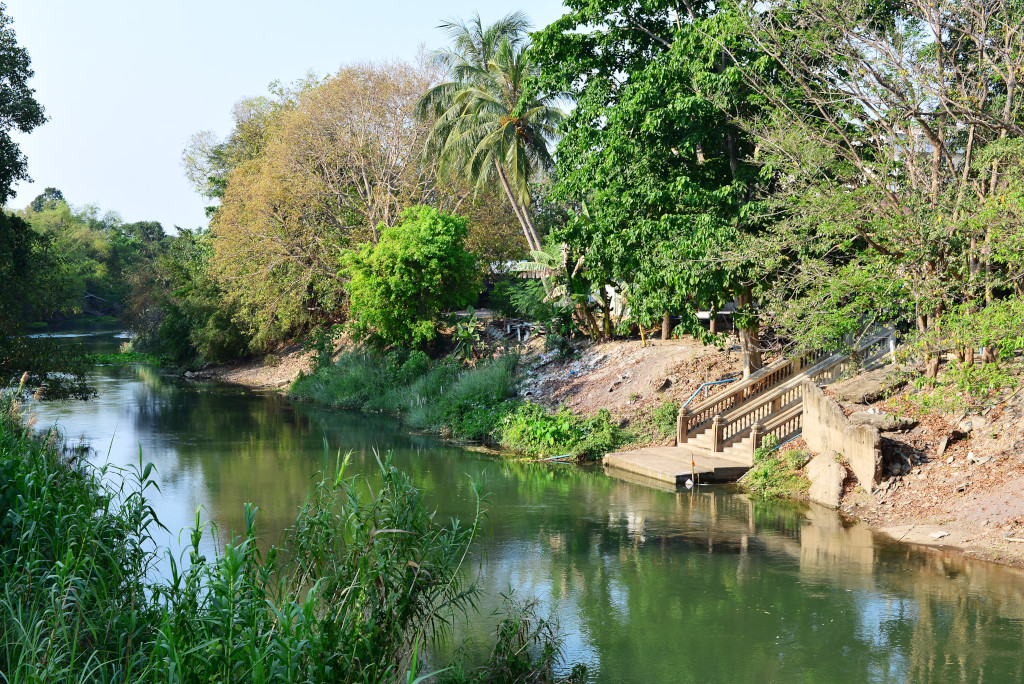 More serious problems crop up momentarily, though, as the stray dogs that had been happily lounging about collectively decide they need to demonstrate their ability to defend their presumptive masters’ territory, and for lack of any other visible intruders, I will be the showcase. Unfortunately, their snarling and rabid aggression isn’t really the best way of getting on my good side, and several confrontations send them howling for cover and the nearest humans, who as usual didn’t bother doing anything to call the dogs off. 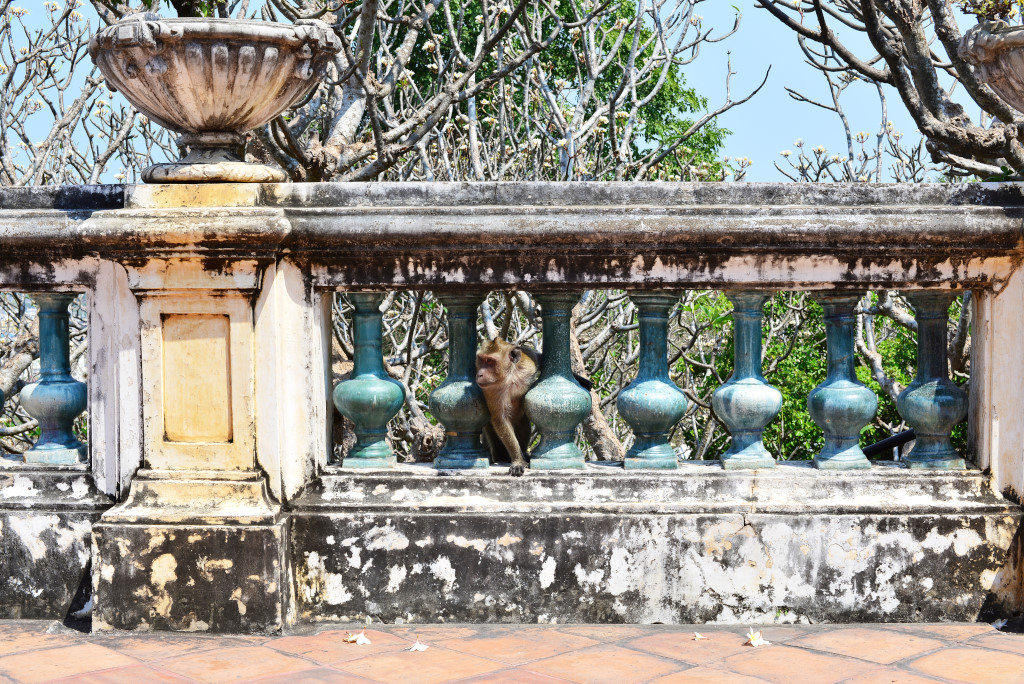 The long sweaty hike to the north of town was probably not a good idea, but closer to where the guesthouse should be located, locals confirm that I am in fact in the right area, two young sons of the local pharmacist instructed to guide me the last steps to the guesthouse. 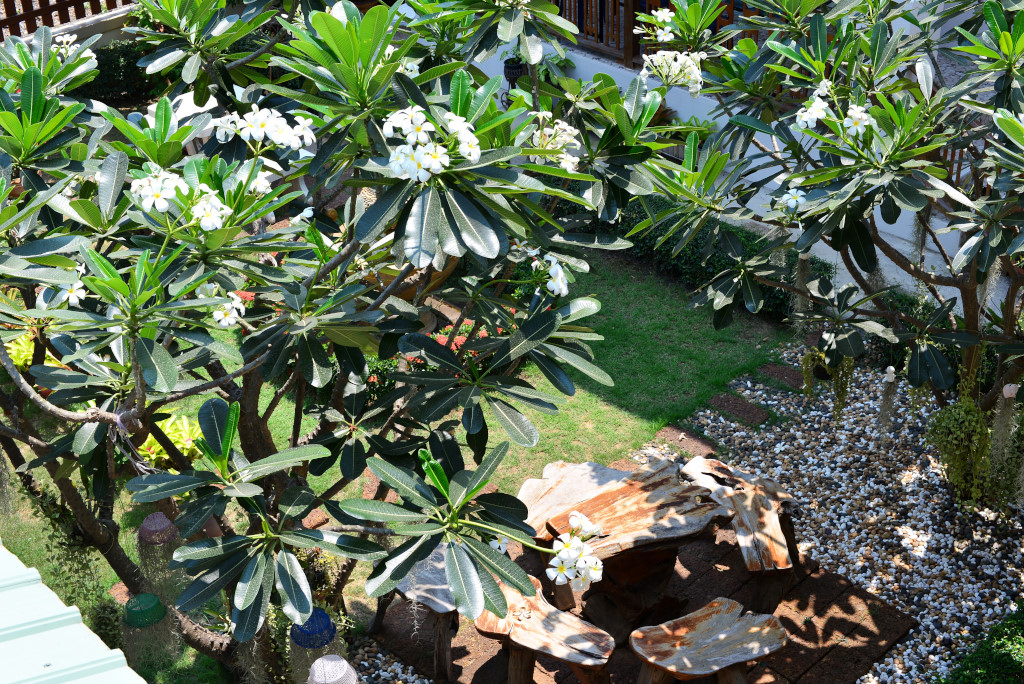 I am somewhat disappointed that the guesthouse is so far from the town centre, as it will involve either far too much walking or excessive commuting costs, but the wiry owner quickly sets me at ease with her rapid-fire instructions, including the complimentary bicycle that guests are provided with. Even in the dusking light I can see the two-level, winged bungalow is immaculately maintained, with trickling fountains set amidst the carefully pruned flowering shrubbery. 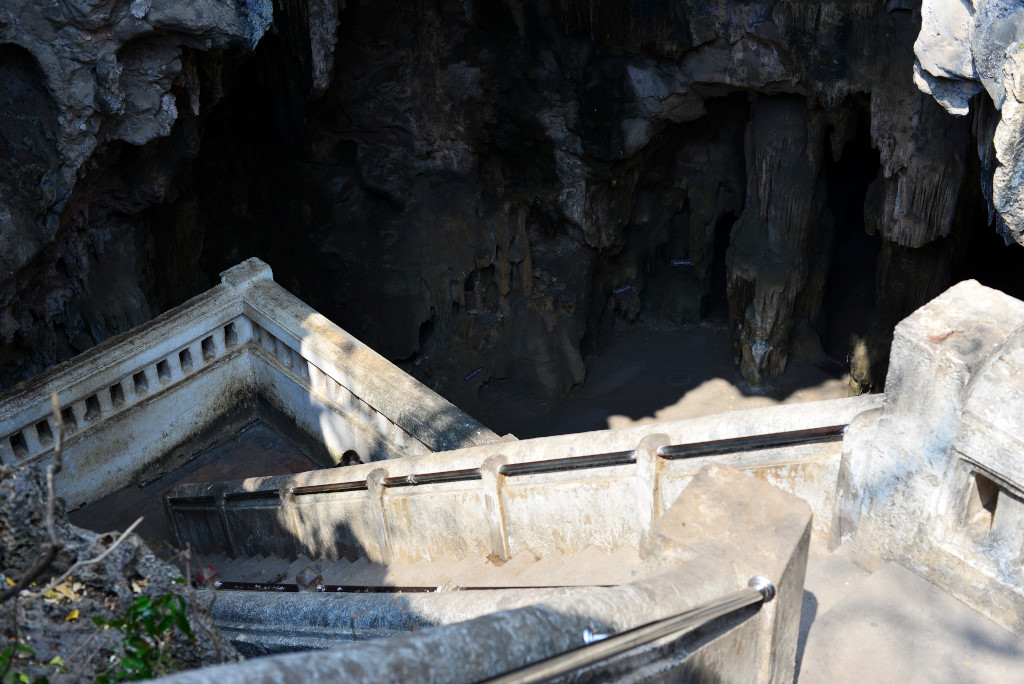 I am assigned a large window-lined room at the end of the second floor of the pastel yellow building, tiled as the rest of the building, with a fridge, queen-sized bed, cabinets, excellent lighting, wifi, and a reasonably-sized balcony, the entire room absolutely spotless. Due to the location of the house, the place is also extremely private and quiet. This must be one of the best rooms I have found in the whole country, at least in terms of value for money! 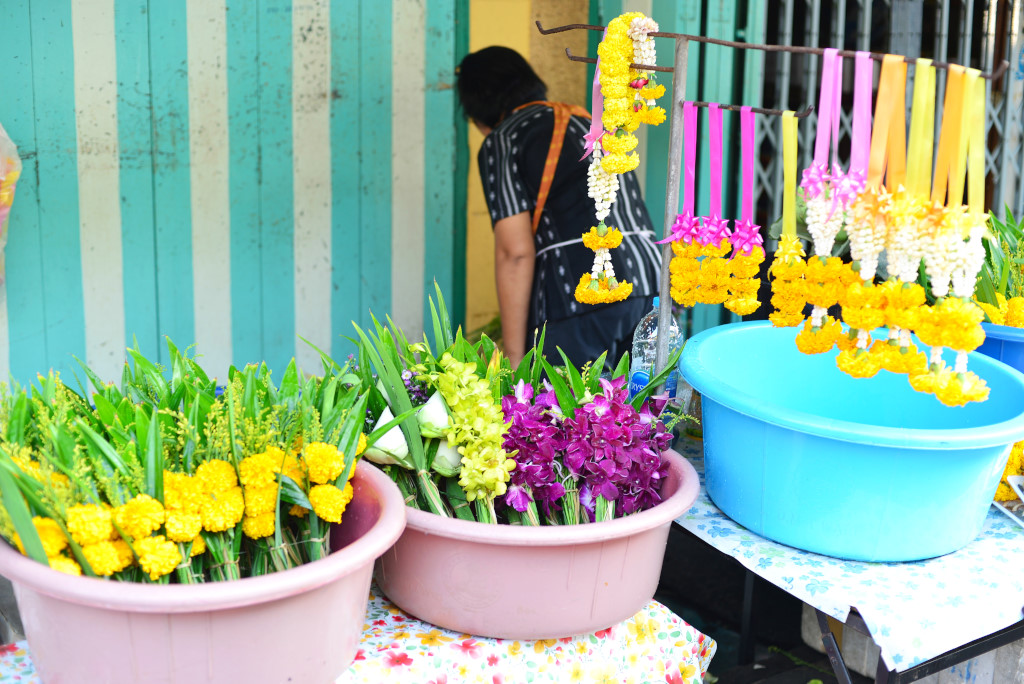 The woman explains how to get to the night market, which takes me on the typical children’s bike back towards the area of the train tracks, but along a much more intimate and atmospheric route, past the ambling cattle, a trendy cafe, private residences, a sprawling temple and military compound guarded by soldiers that seem far too young, and then to the right of the bridge, a small night market where the usual variety of foods is prepared. 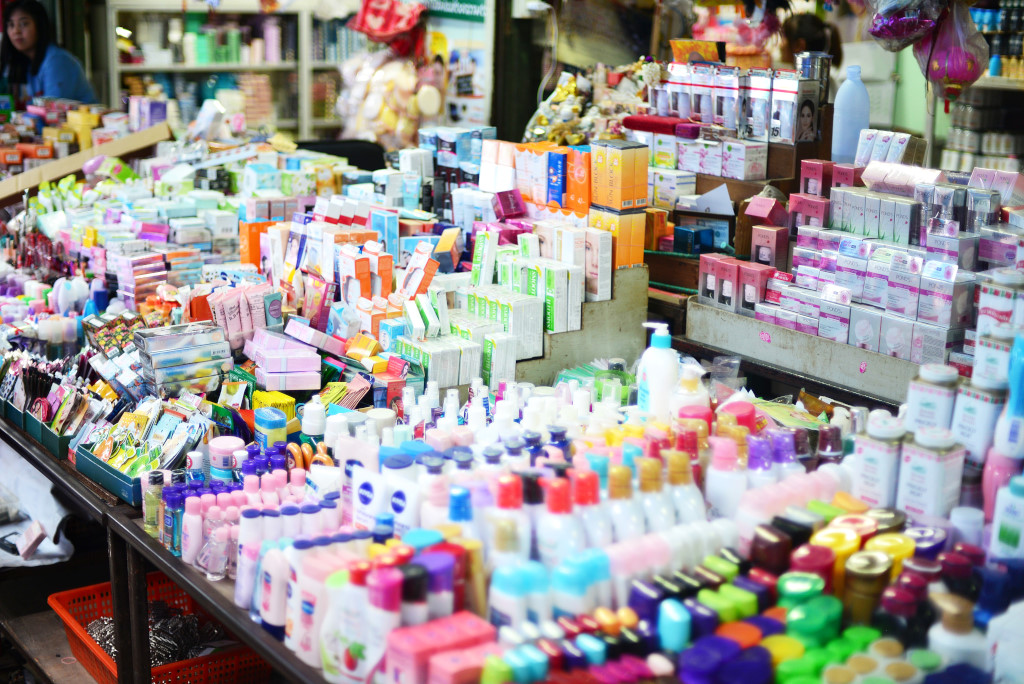 My interest lies in the ample buffet trays laden with every manner of spicy sauce and curry, especially the concoctions visible at the Muslim tables, the aroma and physical preparation reminiscent of traditional Malay food. Pleased as they are to welcome me to their stand, the women are somewhat hesitant in being compared to their neighbors to the south. 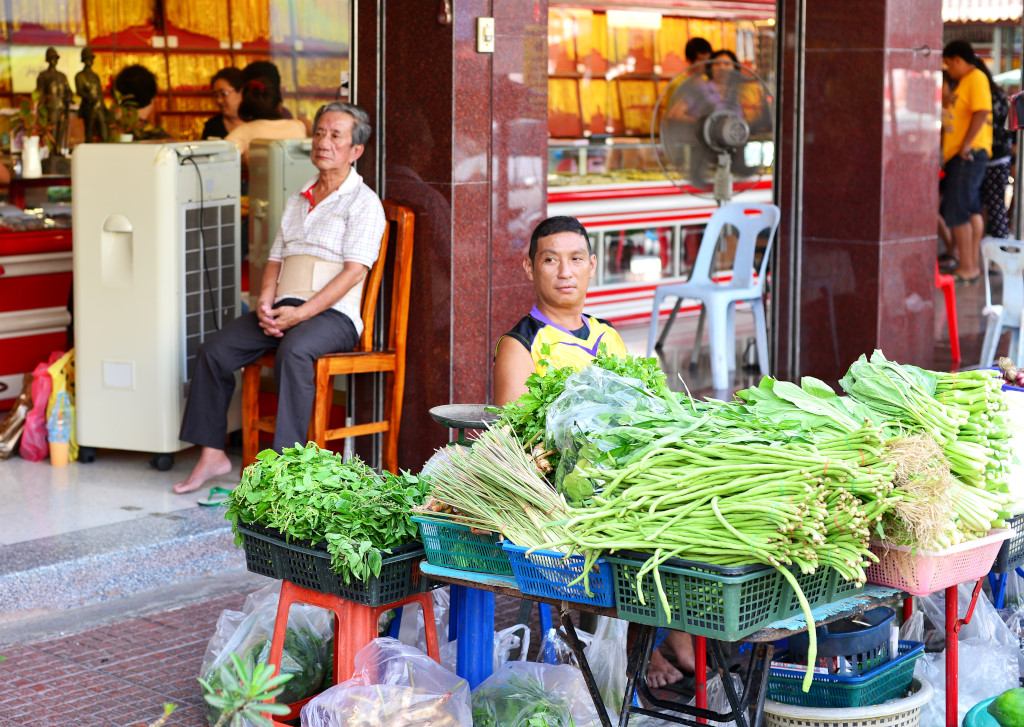 ‘This is Thai food’, they insist, ‘and definitely not Malay’. I shouldn’t be playing with any sensitivities between Buddhist and Muslim Thais, no matter how much their culture may seem Malay, considering the fact that the Muslim south of the country is a virtual war zone …

A magical ride back to the the far end of town, ducking under the railway bridge, then following the serpentine road towards the 2N Guesthouse, where I settle in for an evening of errant writing … 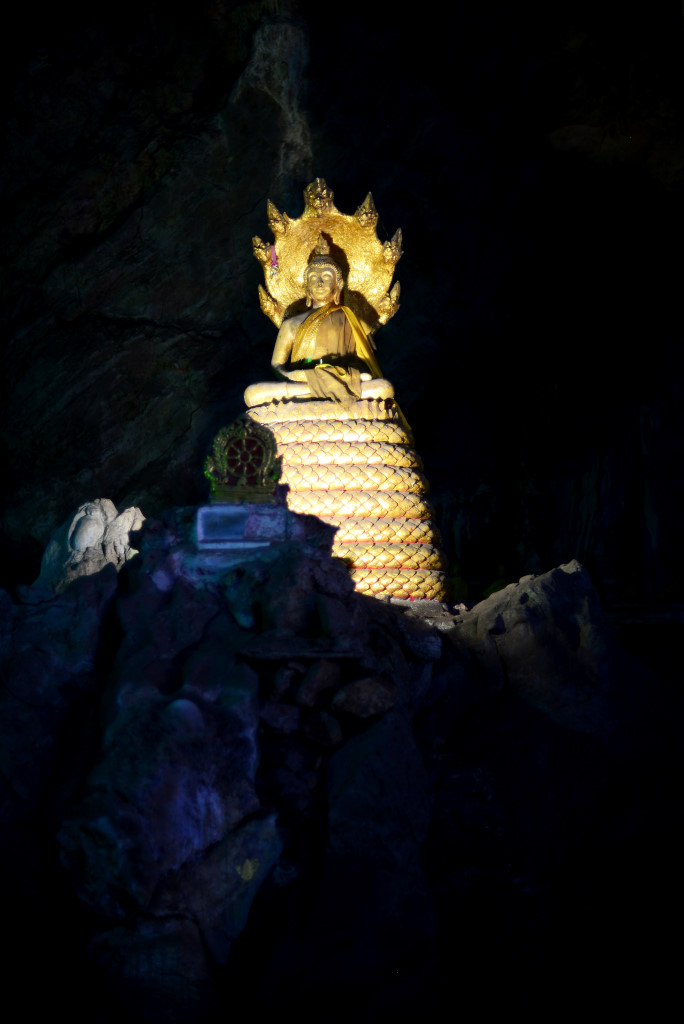