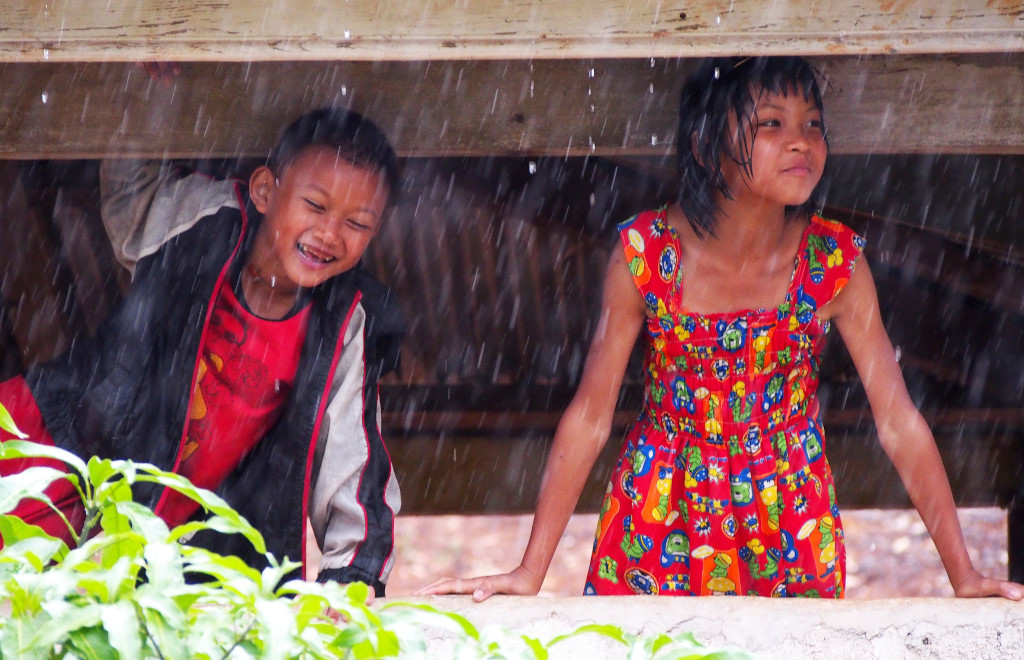 The deafening levels of music and general noise emanating from the circus stage eventually subside as the night wears on, replaced with a hypnotic low-level throb of aquatic and avian creatures emitting their nocturnal songs, lulling me in and out of sleep, the country setting a welcome backdrop to the relentless urban noise elsewhere in the country. 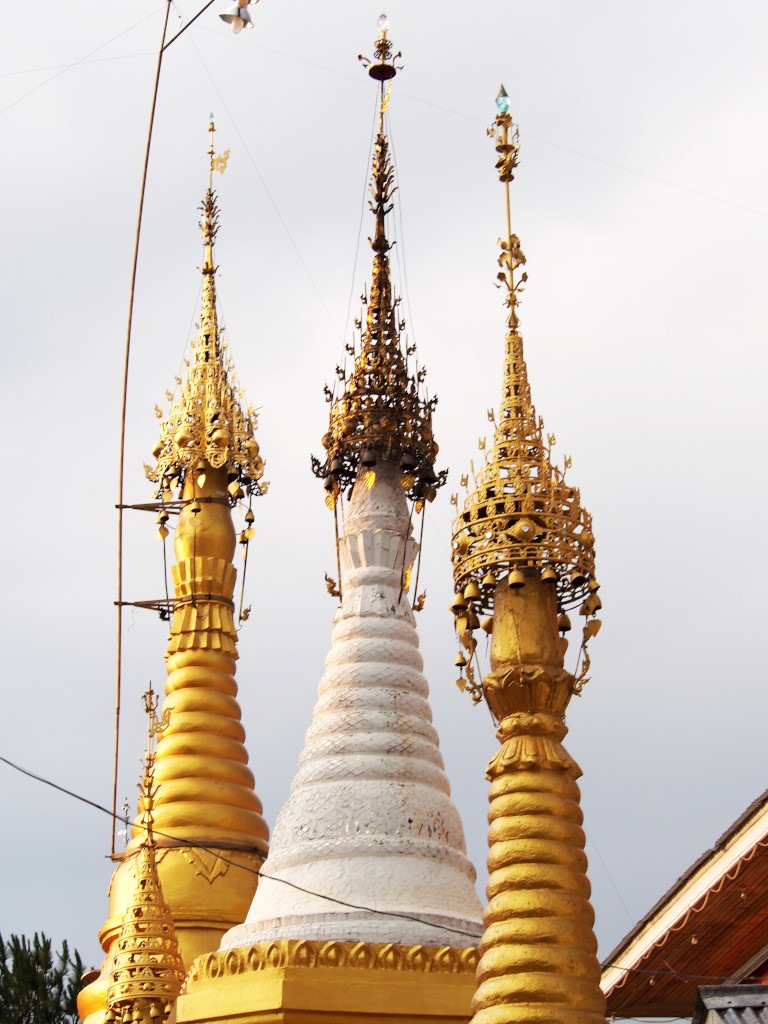 Morning approaches and the blare of music starts up on the circus stage again, the respect for privacy and quiet typically a remote concept in many cultures in the world. But no matter – I would love to see the circus, and hopefully tonight will present a suitable opportunity. 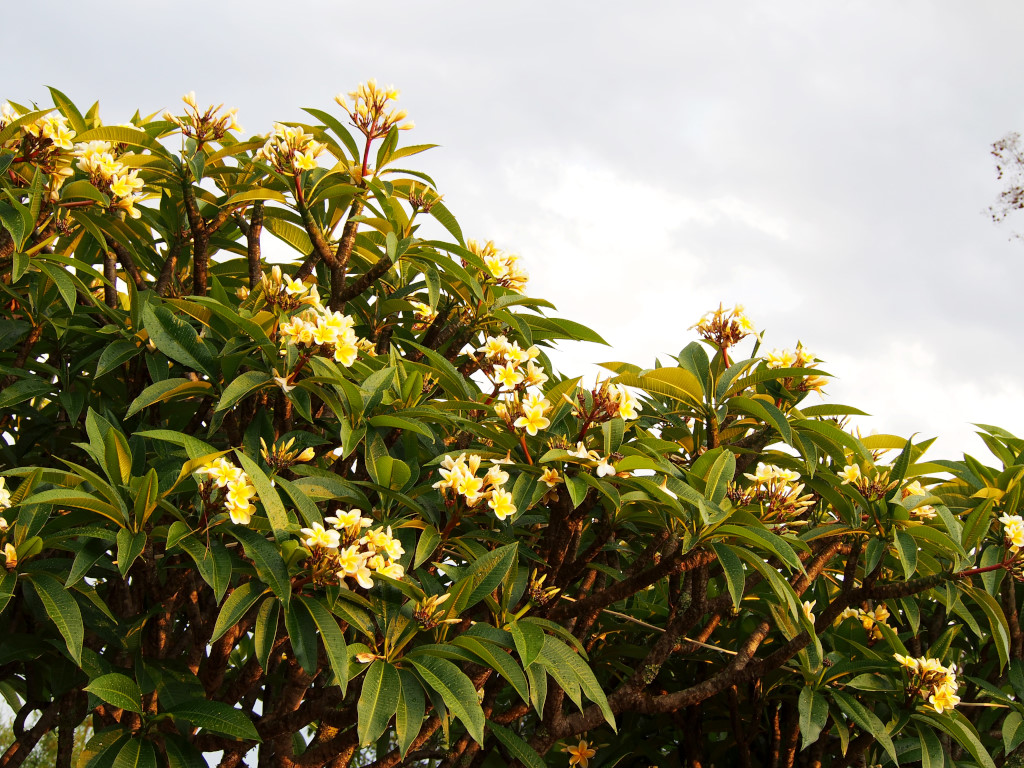 Breakfast on the terrace at the Railroad hotel is another reason to be staying here. Served on the long wooden patio looking out over the circus field one floor below my room, it features a generous helping of cut fruit, toast, jam, rice and jaggery fritters, alongside jasmine tea and sweetened coffee, not my thing, but not much of a problem, considering the strong black coffee they prepared expressly for me yesterday afternoon.

At the adjoining table, a couple from Denver recount their own travel adventures in Central America, India and Southeast Asia. It is a heartwarming experience to see young Americans traveling the world, not that my enthusiasm for this sophisticated couple’s adventures would be seen without a grain of patronization. Amusingly, they arrived at 2 in the morning at the railways station, where they were met and brought to the hotel by Dance, the inebriated older Nepali-Burmese who followed me into the hills yesterday and back down again. 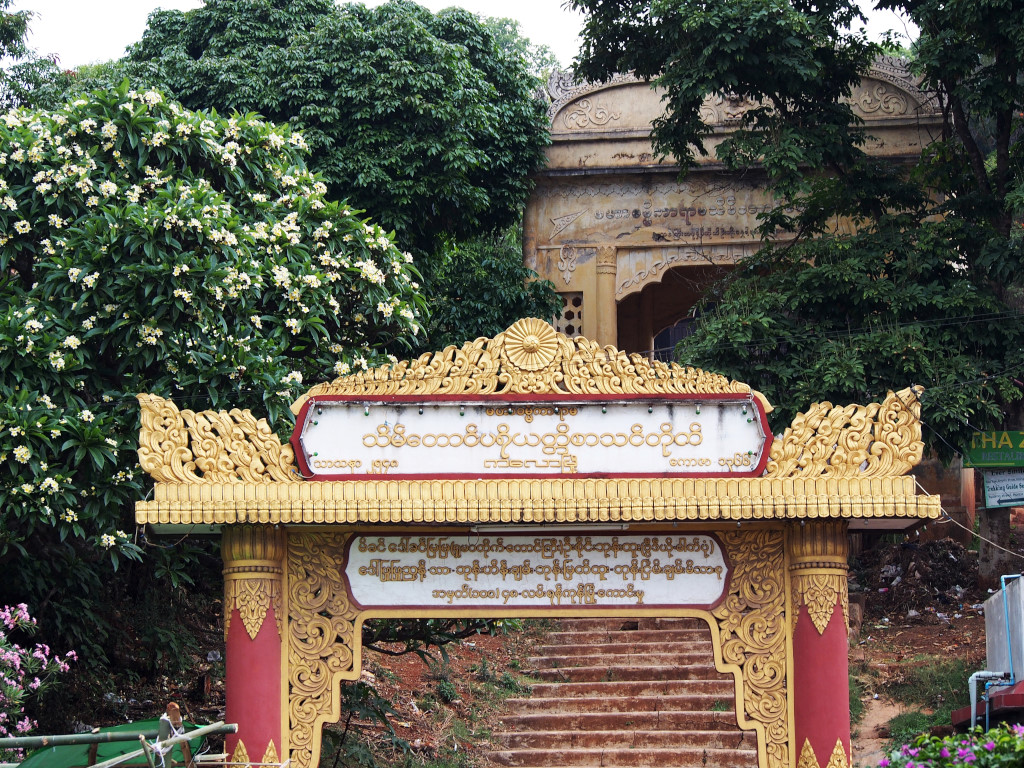 A belated walk into town ensues in the early afternoon, the chance of taking any trek to anywhere significant eroding, considering how late in the day it is.

The indifferent stationmaster at the neighboring train station confirms that the train plying the 100 kilometer route takes some six hours, which seems ludicrously slow, to say the least, and far slower than the trains running the main trunk lines between Yangon, Mandalay and Mytyina. 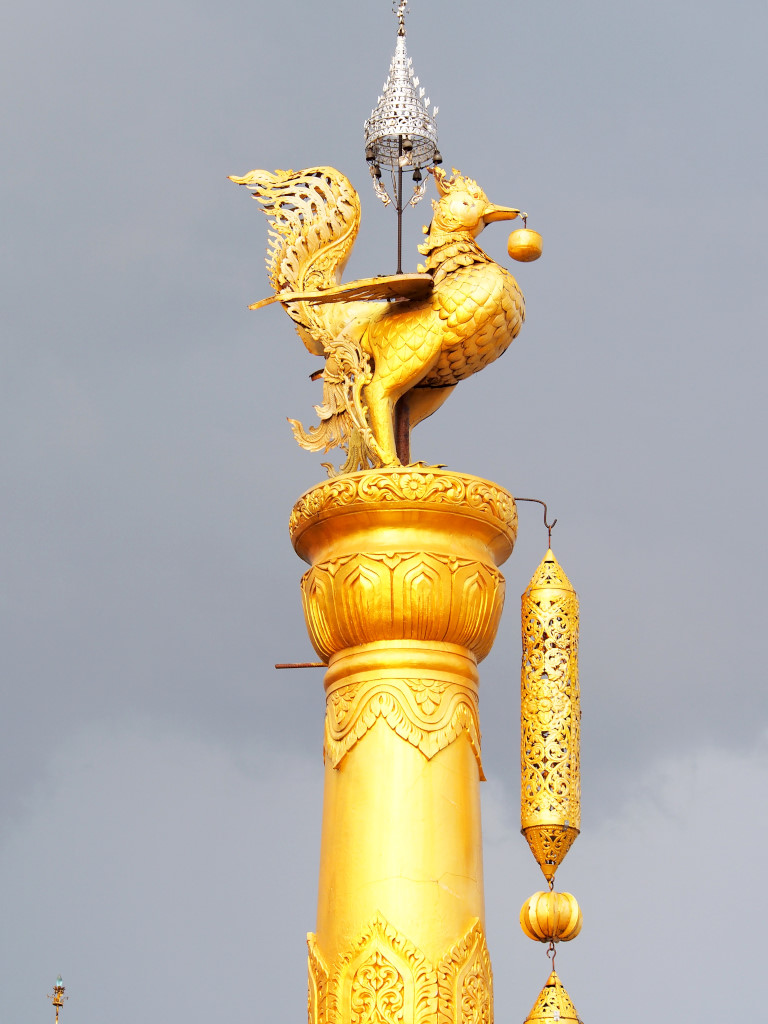 A somewhat forgettable Shan noodle soup along a roadside eatery ensues, the focus being to non get doused by the feral youth gyrating with their hoses and buckets of water along the roadside. 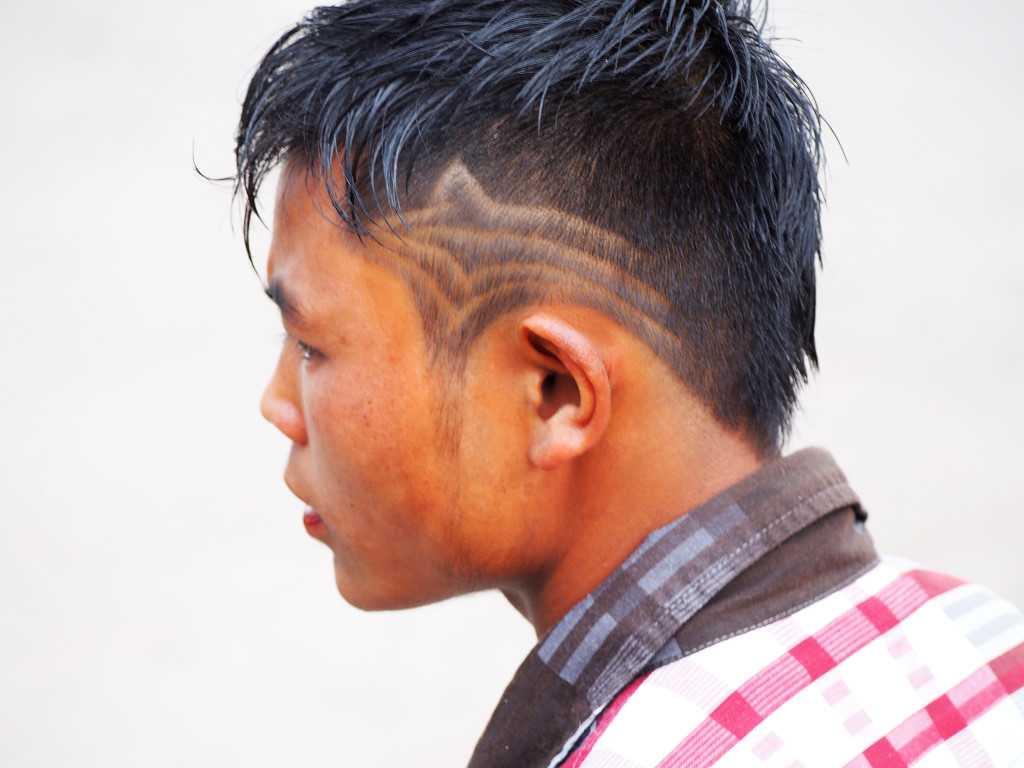 I wouldn’t normally care at all, but as I point out humourlessly to each and every group I ask not to splash water on me, I am carrying a $750 camera that they probably have no ability and never will have any ability to replace, and they probably wouldn’t want me taking the law into my own hands if they destroy it.

Why is everyone having such a great time in Thinyan except me! 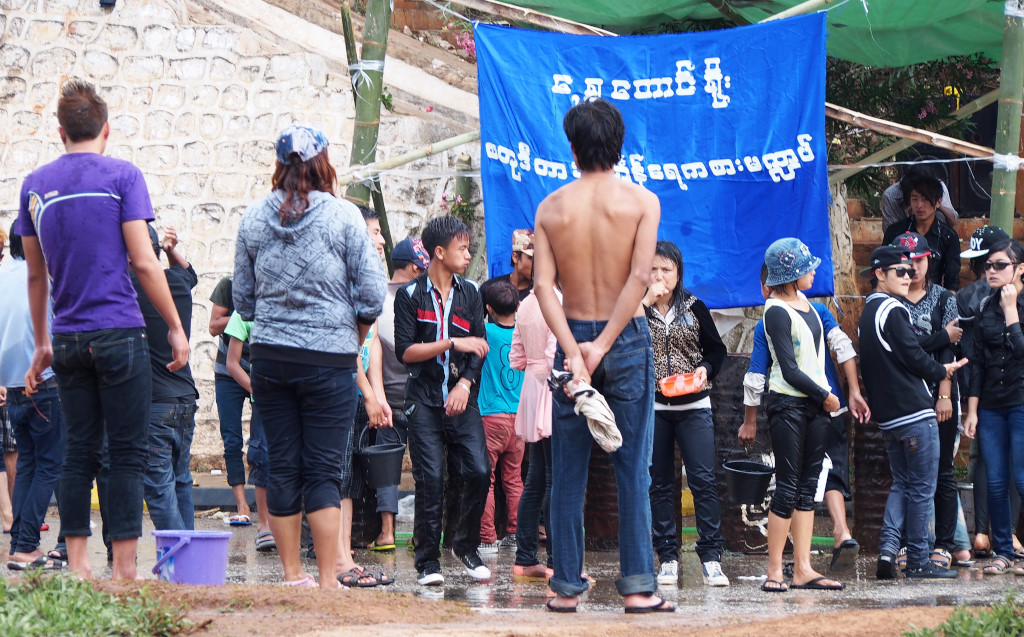 I guess traveling is always a big party until things go wrong, as they already have with my very expensive Nikon camera that became worthless after a tiny fall.
The travel agency and bicycle rental place at the hotel offer bicycles for 3,000 kyat a day. The young woman working at the reception is indignant that I would dare suggest her prices are twice those found elsewhere in the country, although their bicycles are somewhat newer than the normally extremely shabby bikes. 1,500 kyat for a half day will do for me, however. 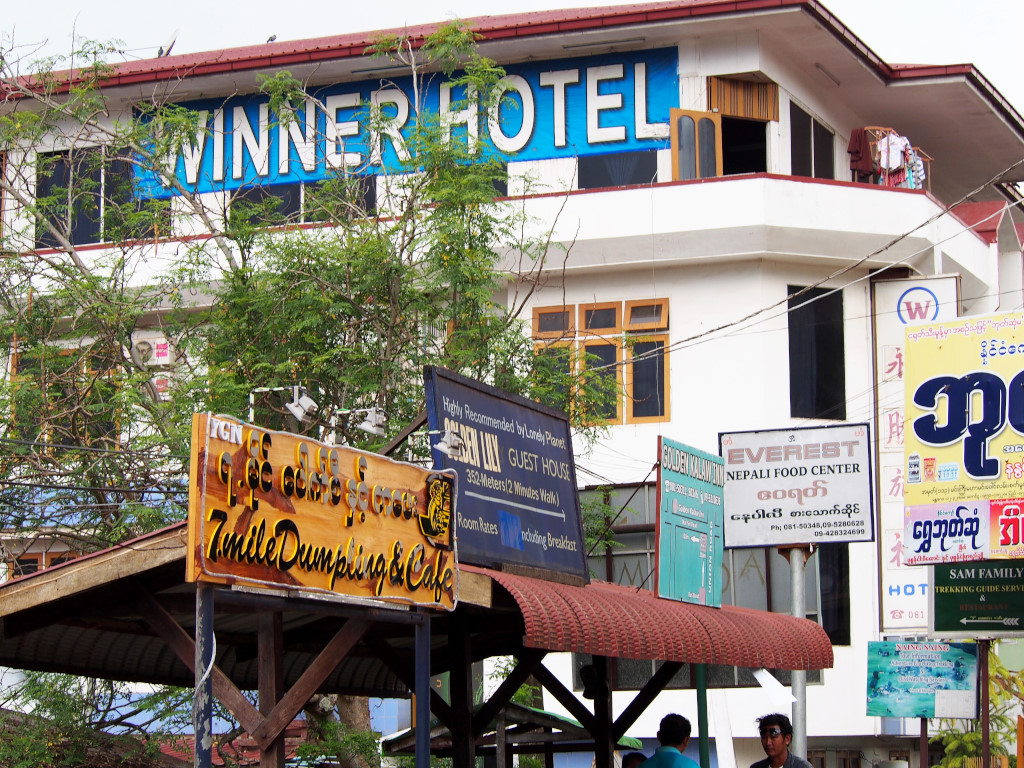 Dodging the larger groups of water-bearing youth along the main arteries of town, I ascend into the hills above the town, a pleasurable and verdant green replacing the bedraggled tired urban landscape of the centre, the leafy green and burst of colour between the ostentatious manors vanishing behind a torrential and unabating downpour when the skies open up a short distance into the trip. 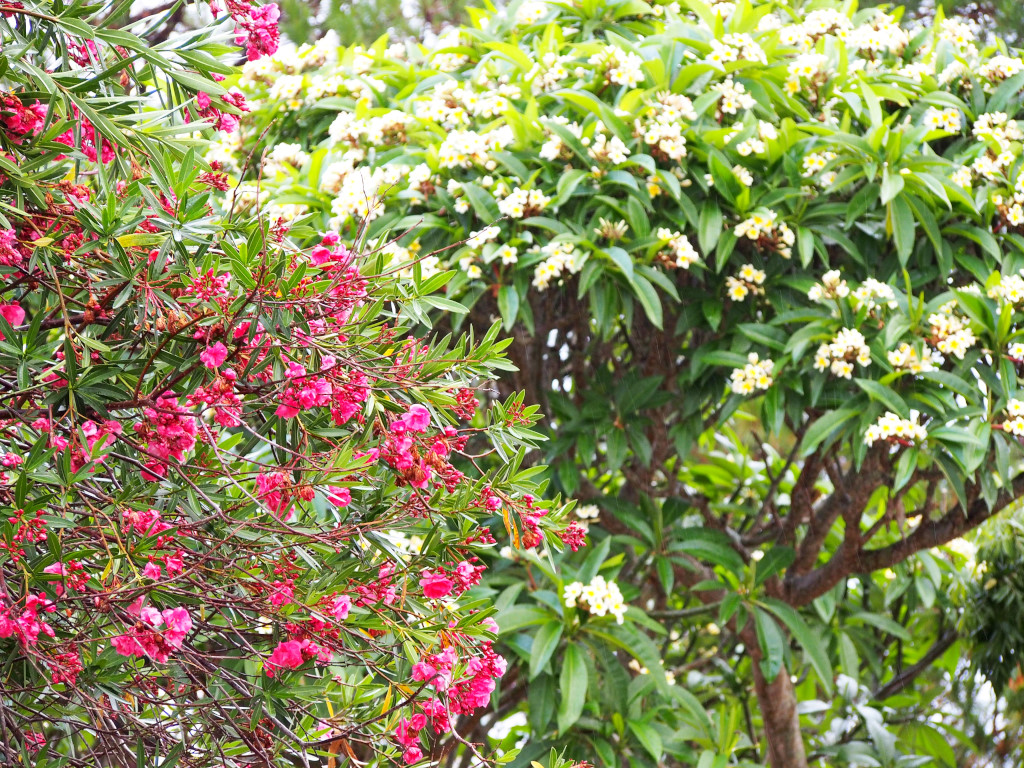 There is probably little point for the enthusiastic Thingyan participants to continue their mission, given that the skies can unleash vastly more water on the world below than a few hoses and buckets could. 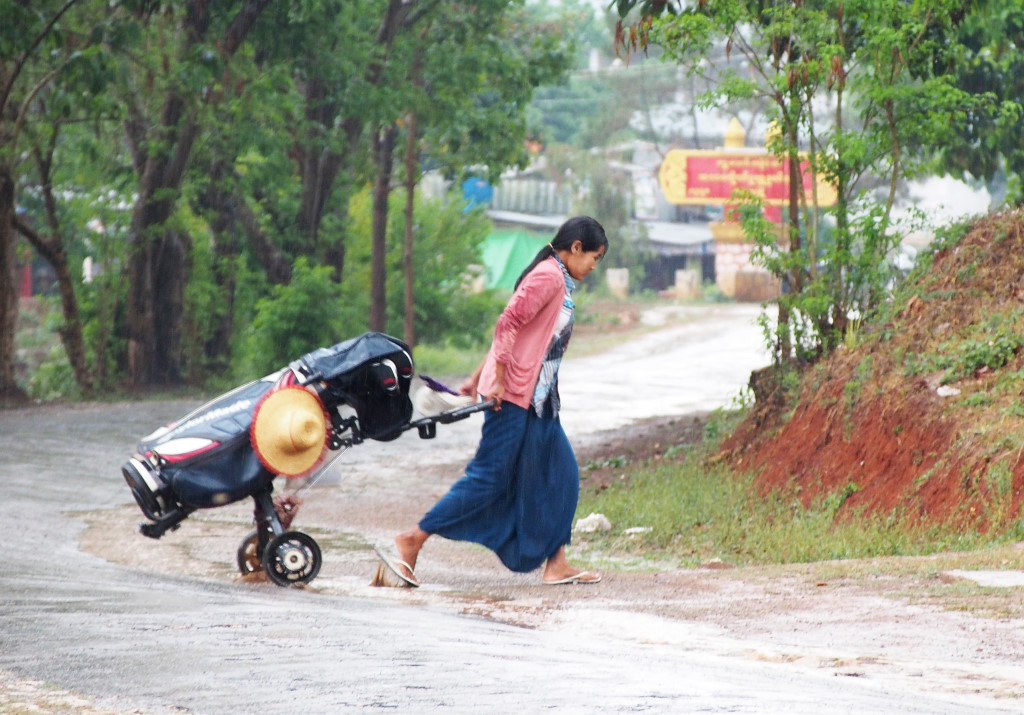 An abandoned guard outpost offers safe refuge for some time, the unfortunate caddies dragging the sets of clubs of their wealthy and overweight patrons up and across the poorly tended lawns in the downpour. 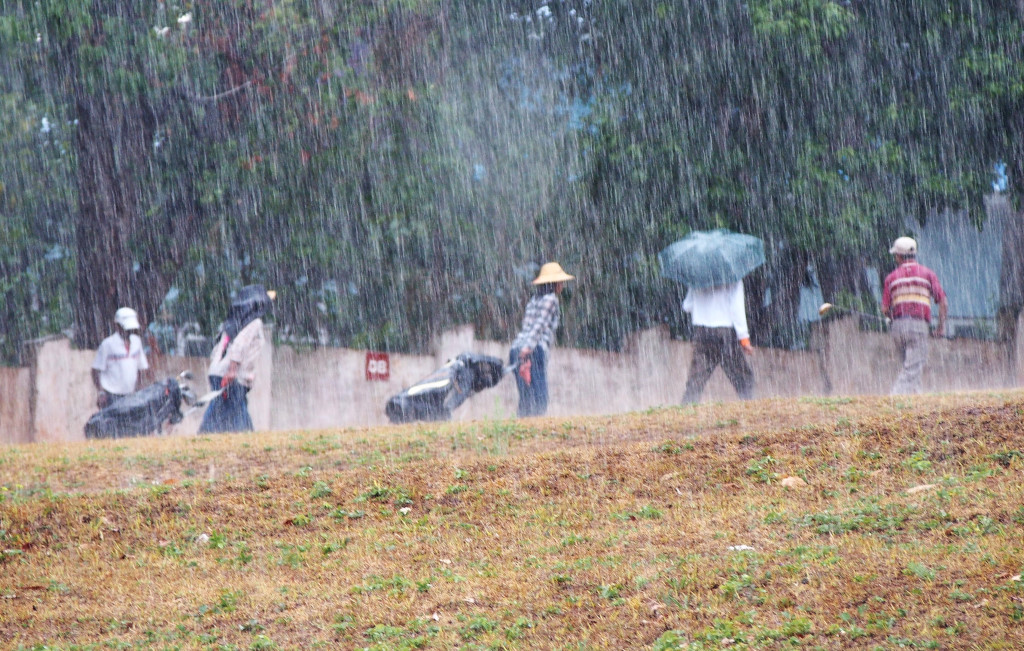 For the itinerant children wandering up the street, the pouring rain evokes little in the way of constraint, one thirsty young girl inventively holding her empty cup skywards when she finds no drinking water in my shelter. 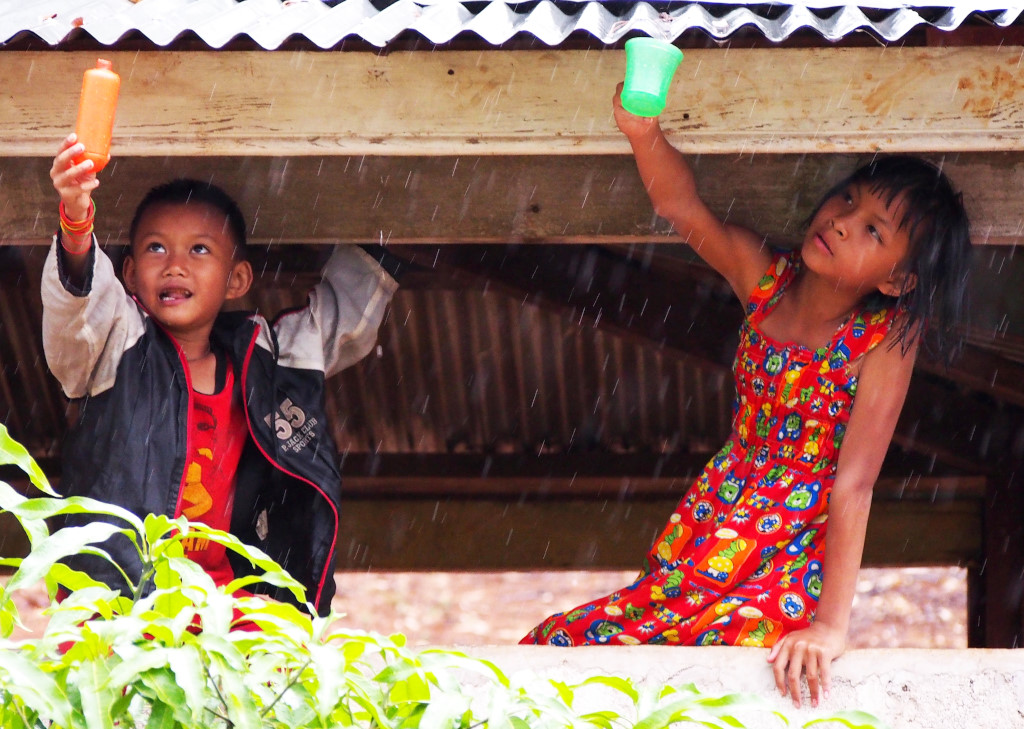 The Swe Oo Min cave pagoda is not far, just above the golf course, but I just don’t want to get drenched on the way there. The cave is littered with innumerable small statues of Buddha in various shapes, sizes and materials, the bulk of donations made by members of the military who have strong connections to the town. However, the notion that the greater the material donation to the temple, the greater the favour won for the afterlife seem to be far from spiritual. 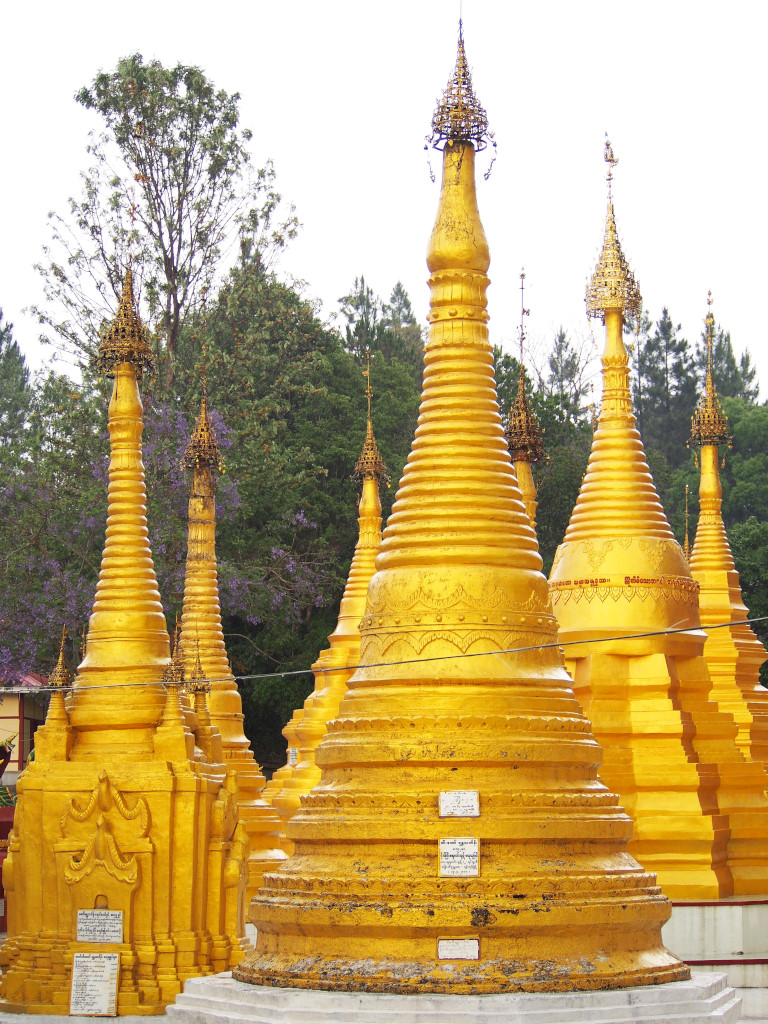 Tour bus upon tour bus jockeys for position along the narrow road, most of the groups traveling all the way from the capital and visiting the top attractions in the region, their gregarious friendliness the perennial standout here as anywhere else in the country. No matter where, no matter when, so many locals seem to be in the best of moods and ready to radiate a tremendous degree of warmth and hospitality. 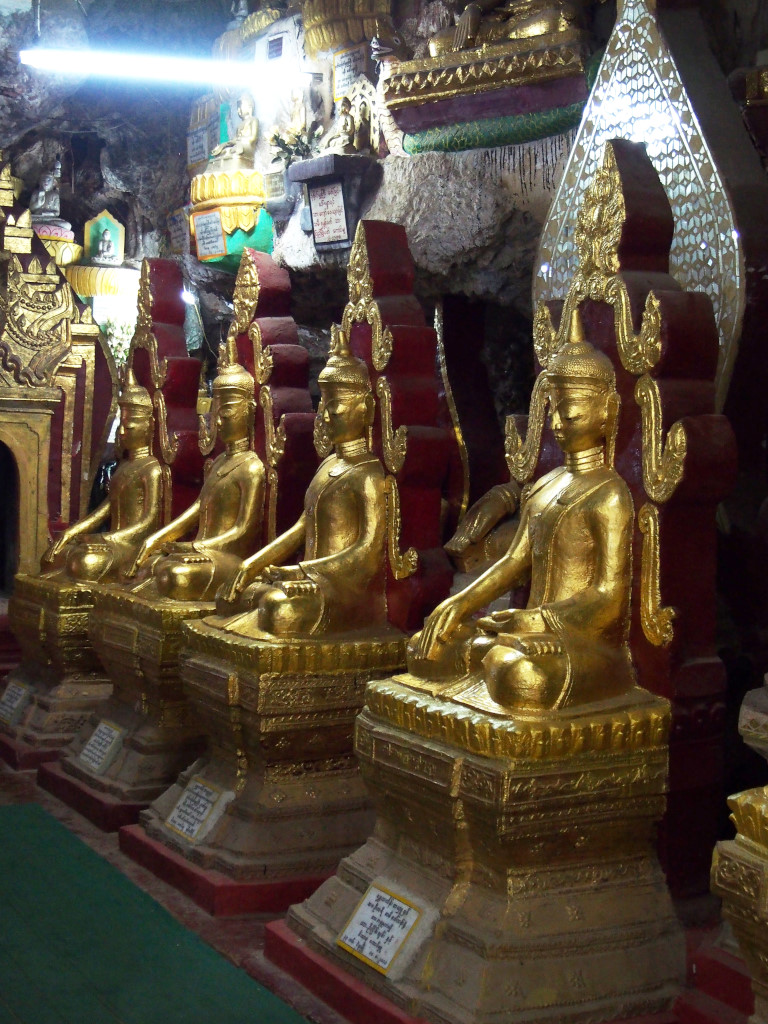 Once another surge in rains has temporarily abated, the Bamboo Strip Pagoda further uphill awaits, the enclave also inundated by busloads of visitors from Rangoon. The lower staircase is canopied in the typical terraced Burmese style, and is inhabited by no more than a few more adventurous visitors, young escapees from the watery Thingyan extravagance. The friendly roving dogs seem a lot less aggressive than the temple-bound dogs found in more off-beat locales in the country. 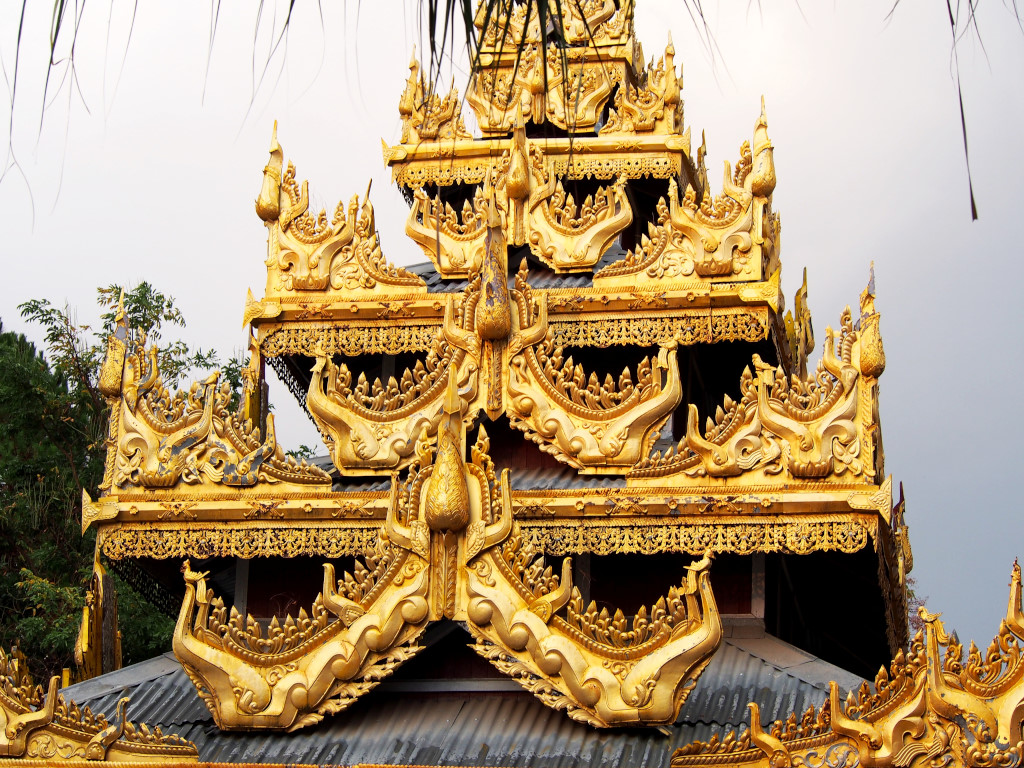 Aside from the hordes of visitors, the monastery set on the hilltop looking out over the valley in which Kalaw is set has little to offer other than its gold-flecked bamboo statue of Buddha, and many lesser trappings of the faith set in the smaller hall. 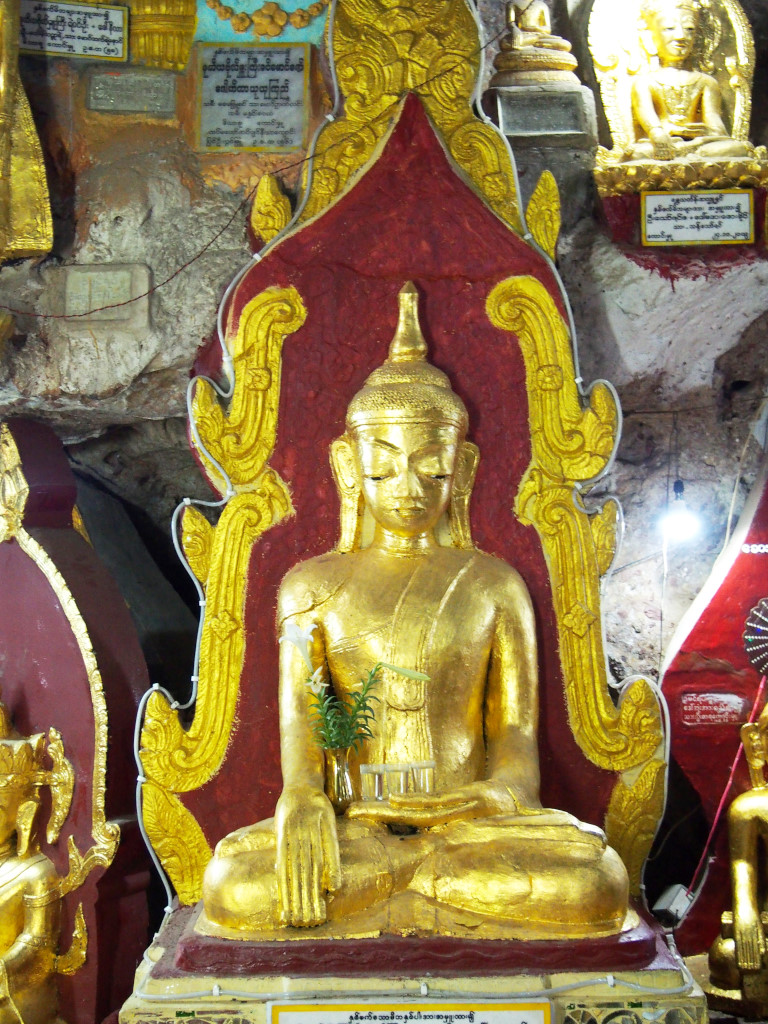 Descending towards my bicycle and the cavorting canines, the sky clears, a rainbow emerging across the distant slopes, the rains abating for the remainder of the evening. 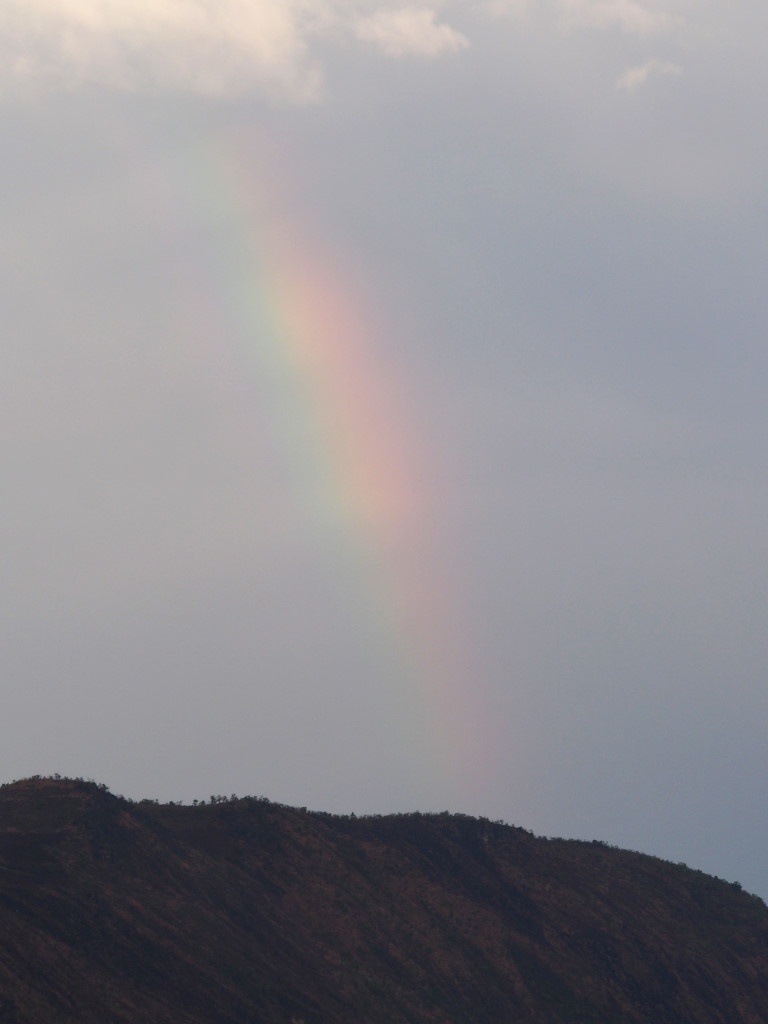 I careen down the rain-soaked roads in the dusking light, the young Thingyan adherents and their older golf-playing enthusiasts long gone for the day, nothing but the bright neon signs of the outlying hotels’ comfortable affluence peering through the gloomy green. 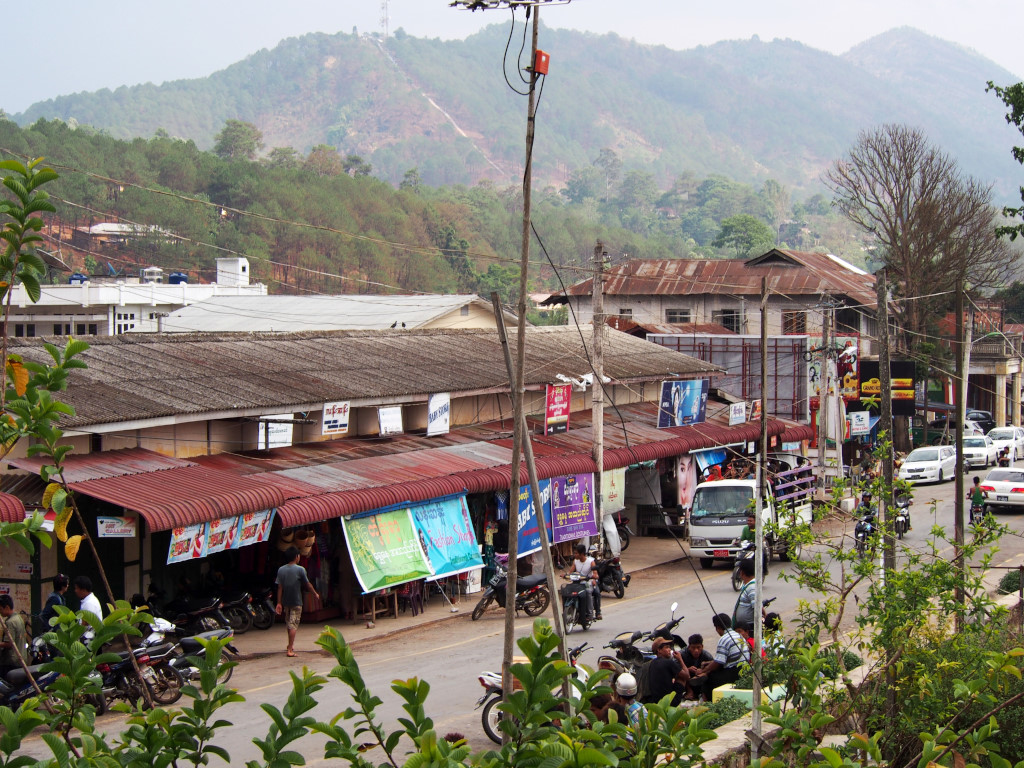 The Indian restaurant on the main road offers a far less impressive assortment of food than its cohorts at the Everest a block away, although also for far lower prices. Once the bicycle has been returned, I trudge through the darkness back to the railroad hotel, the circus shuttered for the evening, what with the unremitting downpours that marked the better part of the afternoon. 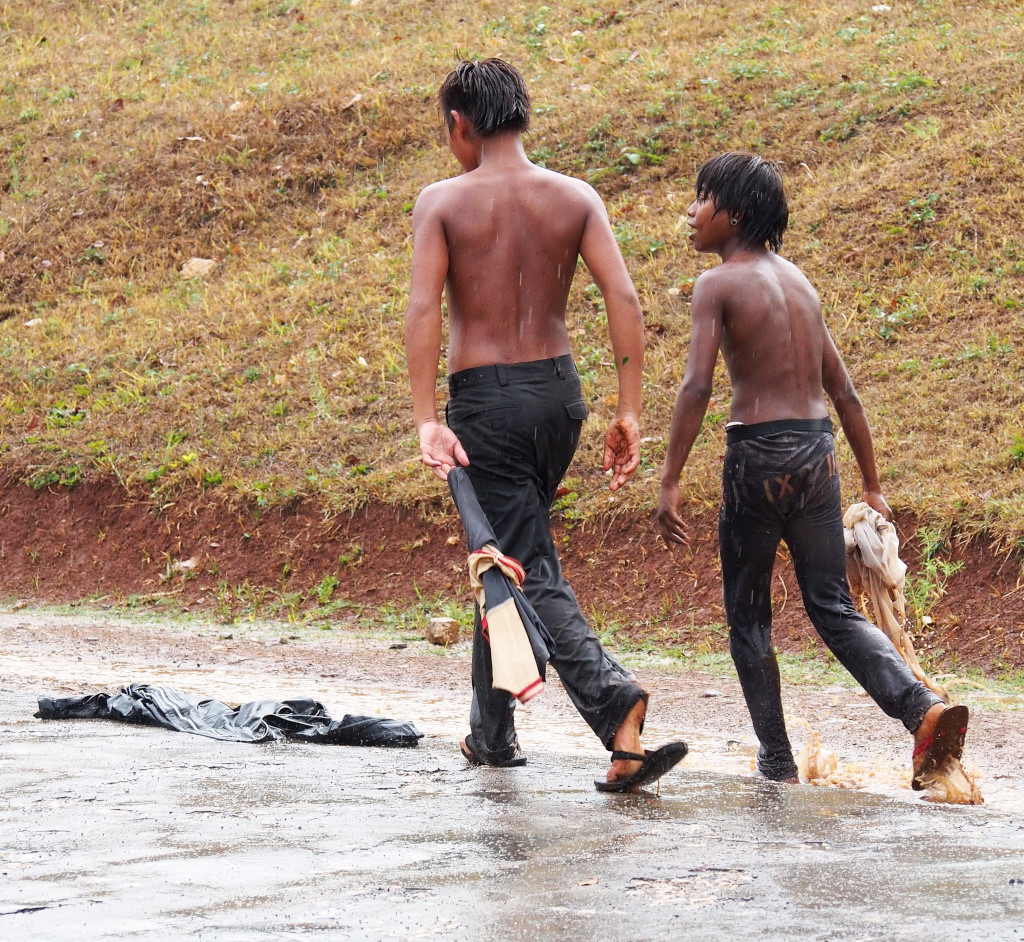