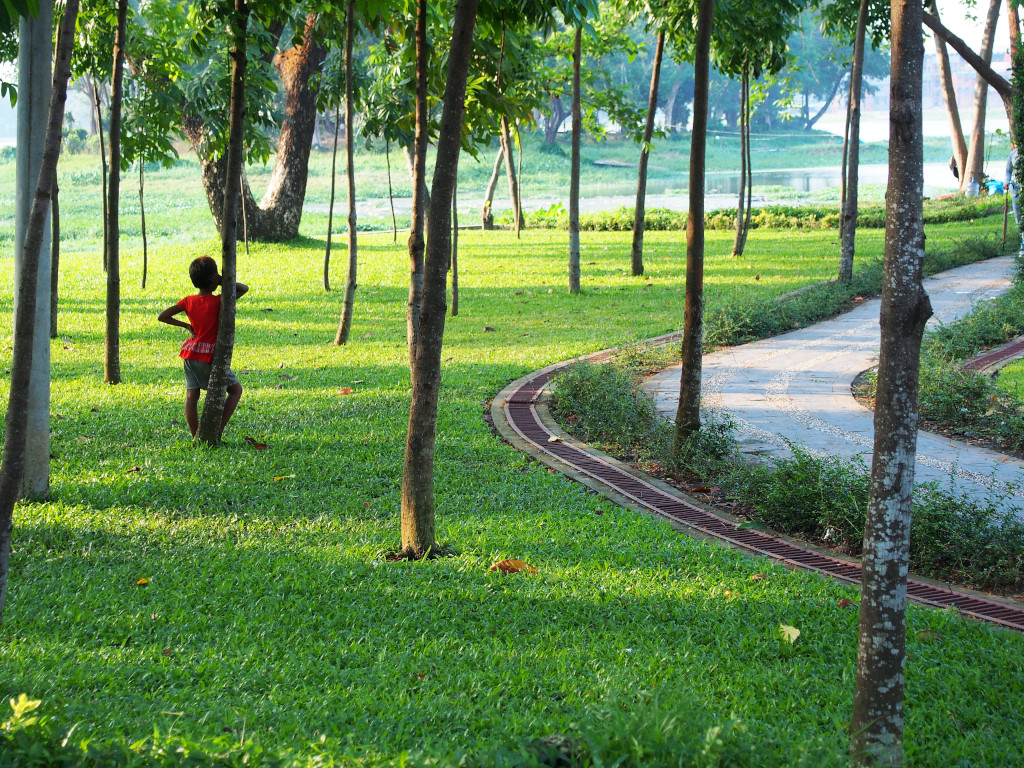 The temperatures in the bus steadily reach a boiling point in the thick, slow-moving traffic into town, the colourful street life missing its marks as my recently dry clothing becomes drenched in sweat and I feel myself gasping for air.

Sule Paya cannot arrive quickly enough, although the outing to the downtown Cafe Parisian outlet would seem misguided at the best of times in this heat. Yangon is a city to be enjoyed with copious amounts of passion, however, not irrespective of the consequences. 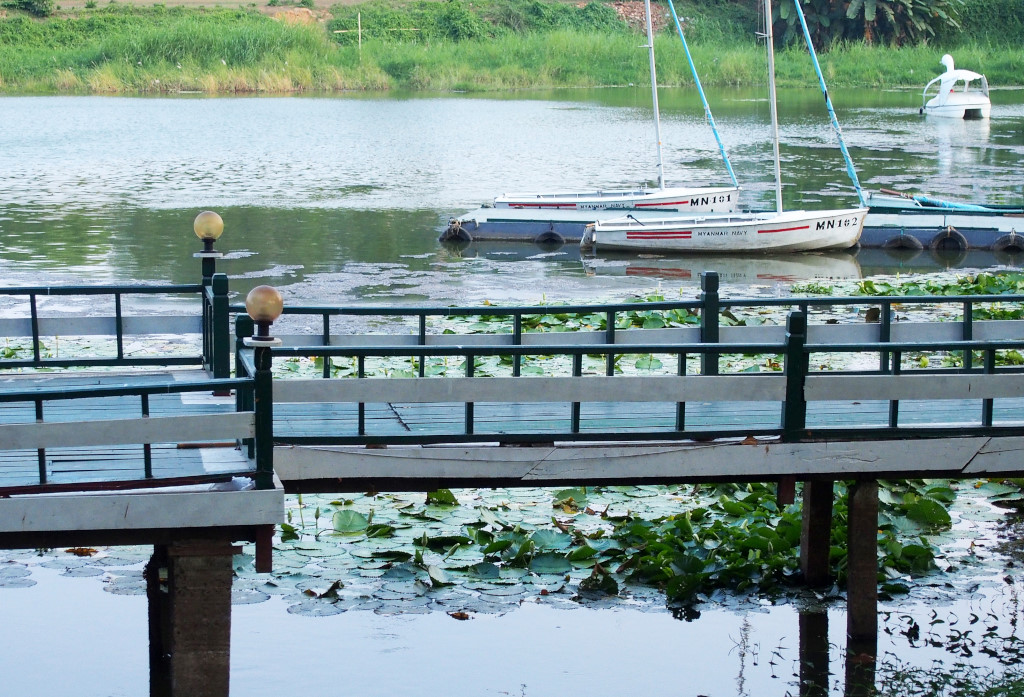 The women at the Myanmar Travels and Tourism office are hardly enthralled by my return, at least not by the questions that seem to be interpreted as doubting their savoir faire. But not at all: I just want to confirm the boat transport connections from Mt. Victoria to Sittwe. 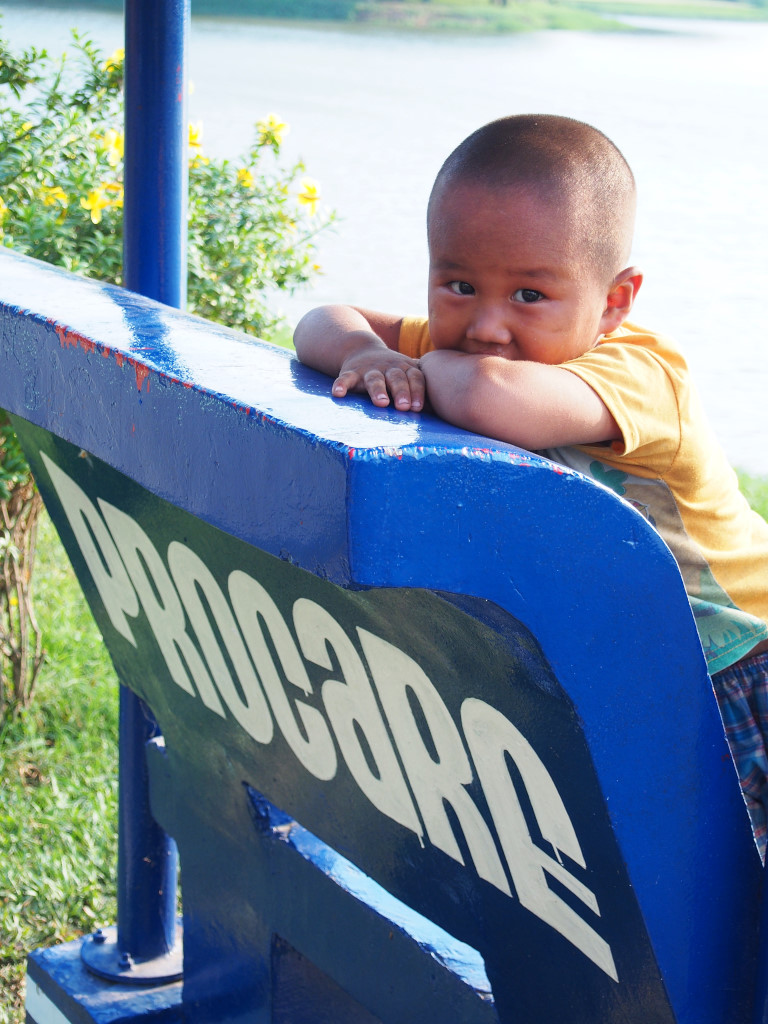 After some obscure deliberation, she has other ideas, in particular, that there should be bus connections from Pakkoku direct to Mrauk U, which comes almost as a revelation, considering that there is apparently a decent road to boot, except that she has no idea as to the departure times. That should not be too much of a challenge, considering that I can easily justify spending a few days in the area. On the other hand, I would hate to be stuck in the off-beat town, and then realize that there are in fact no such connections to speak of. 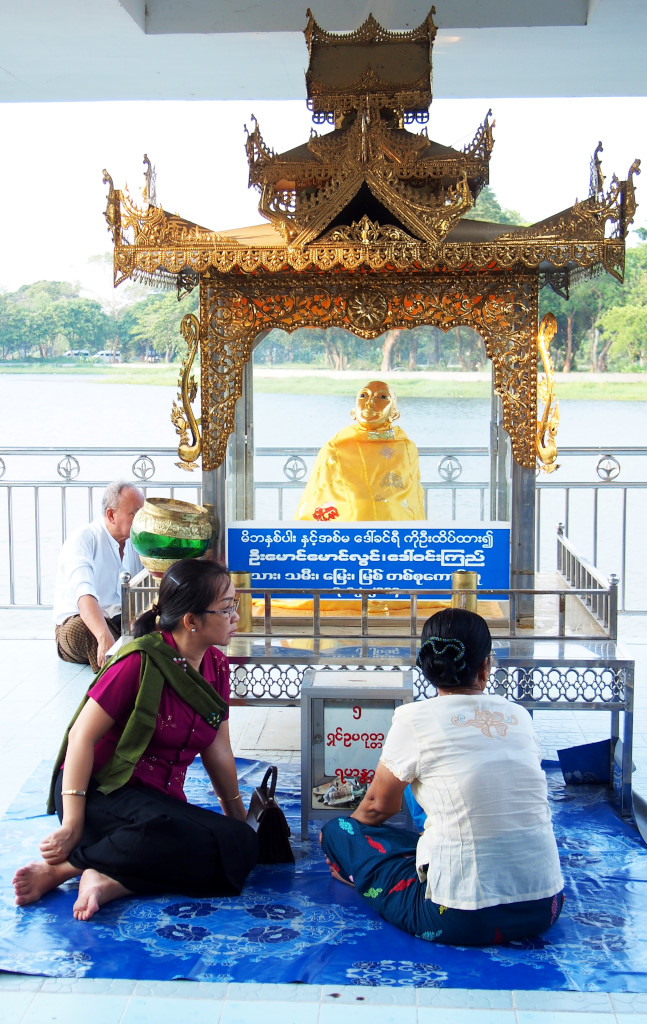 Trying to piece together even a limited itinerary in the allotted time is again a challenge, particularly after having spent a not-particularly productive week in Yangon. I had questions regarding Taungoo, but after seeing the prices of hotels on Tripadvisor, I proceeded to book a hotel directly in Nyaungshwe, without factoring a stop in Taungoo. 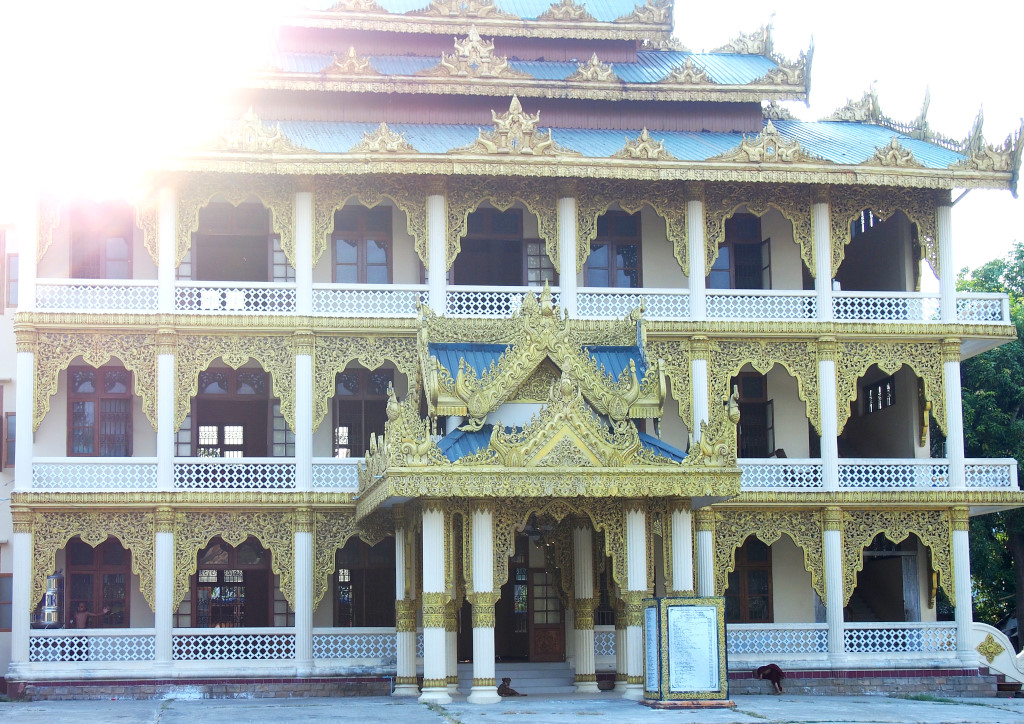 She recommends not leaving procuring a bus ticket for the last minute, as we are approaching Thingyan, the water festival. Initially stiff and somewhat disinterested, she warms up to me after I chat her up, although it is somewhat beyond me where the issues with her attitude lie. 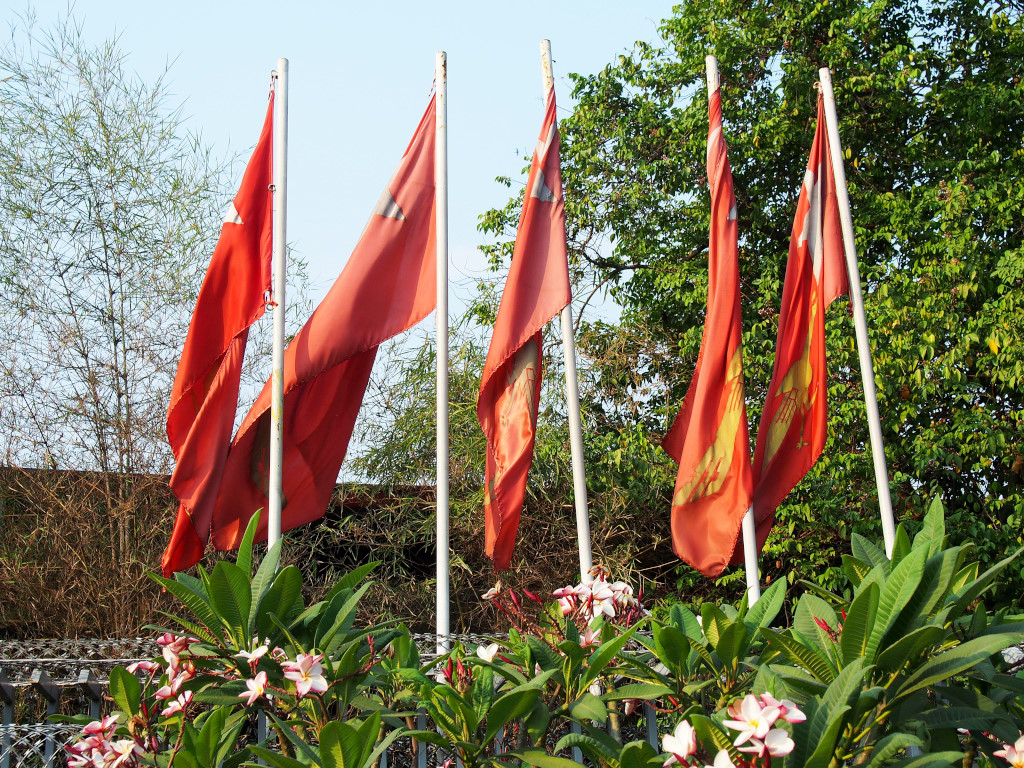 It looks like bus tickets to northern destinations will only be available at the ticket counters located across from the bus station. Given the sluggish overbearing traffic on Sule Paya road, it’s just as well to rush towards the train station and turn right. The initial agencies are disappointing – no tickets are available to Nyaungshwe until next week. 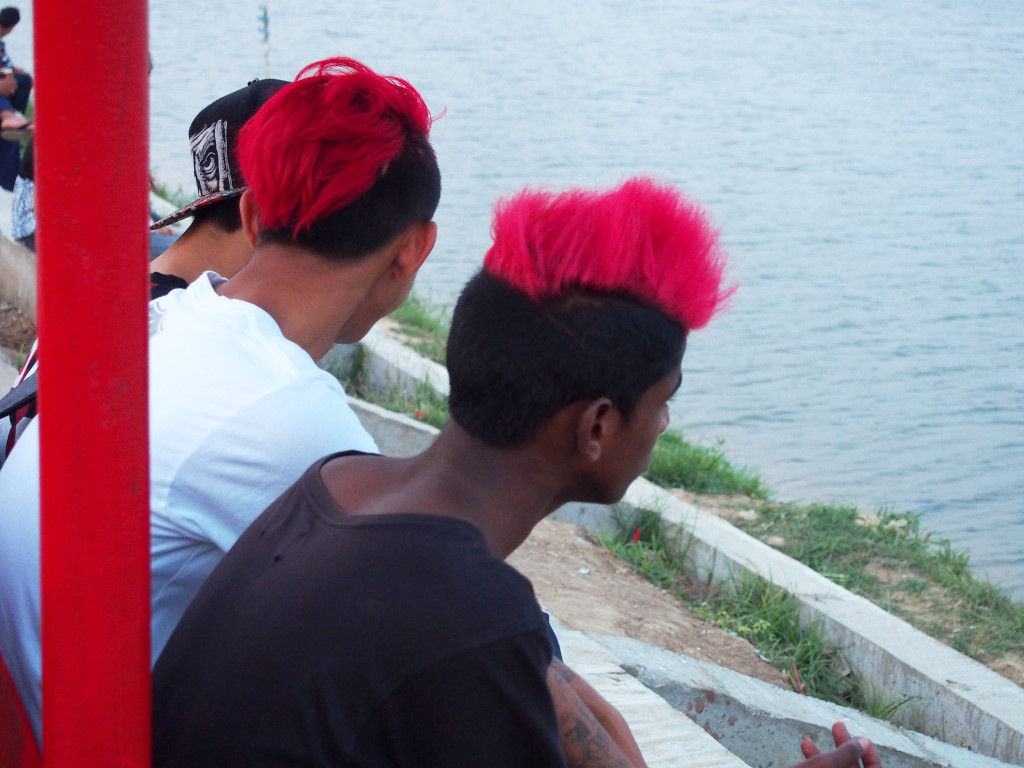 I become increasingly exasperated, since I wasted two hours with the terrible internet connections yesterday evening trying to book some sort of decent accommodation in the Lake Inle area without breaking the bank on some substandard place, and now I find out that I can’t even get there in the first place!

I ask at more agencies, but the news continues to be negative. A travel agent that deals with flight tickets tells me I would have to pay in the neighborhood of $130 for a flight, and concedes that like the hotels in the country, flights are also overpriced. His interest in assuaging me ends there, leaving me to return to the fray of indifferent bus ticket vendors who simply can’t keep up with their own clientele. 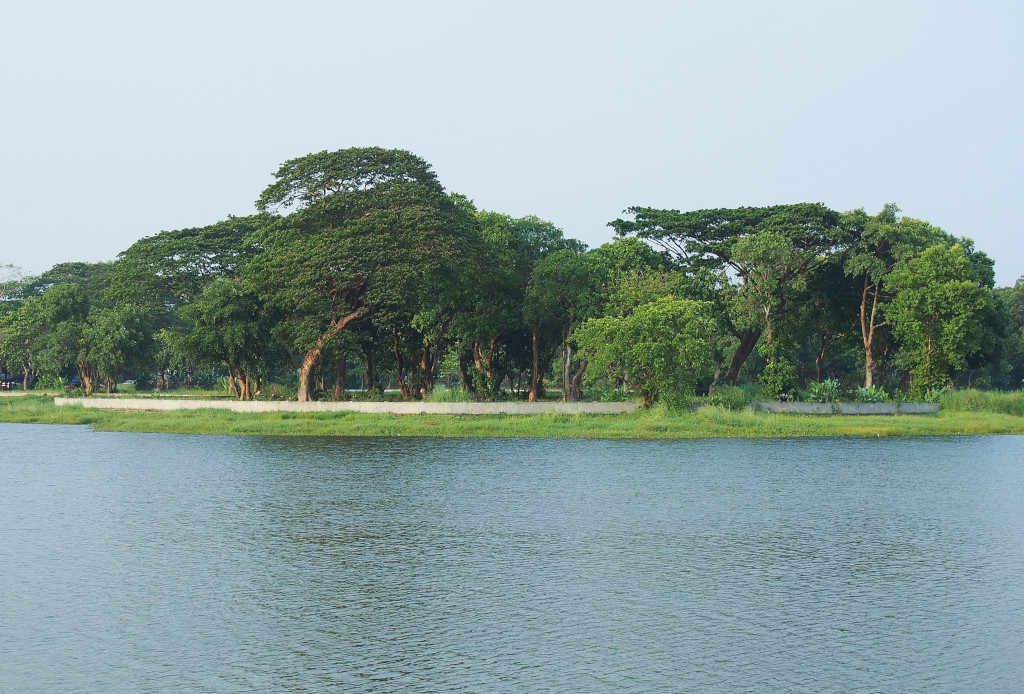 A French trio of backpackers from Lille tell me that it looks like they will be able to get tickets to Mandalay, thanks to the efforts of the beaming young women manning the telephones at the desks before us. If they can procure bus tickets in this mad rush to Mandalay, then why can’t they find tickets to Nyaunshwe? Out of the question? What about to any place in the vicinity of Nyaungshwe? 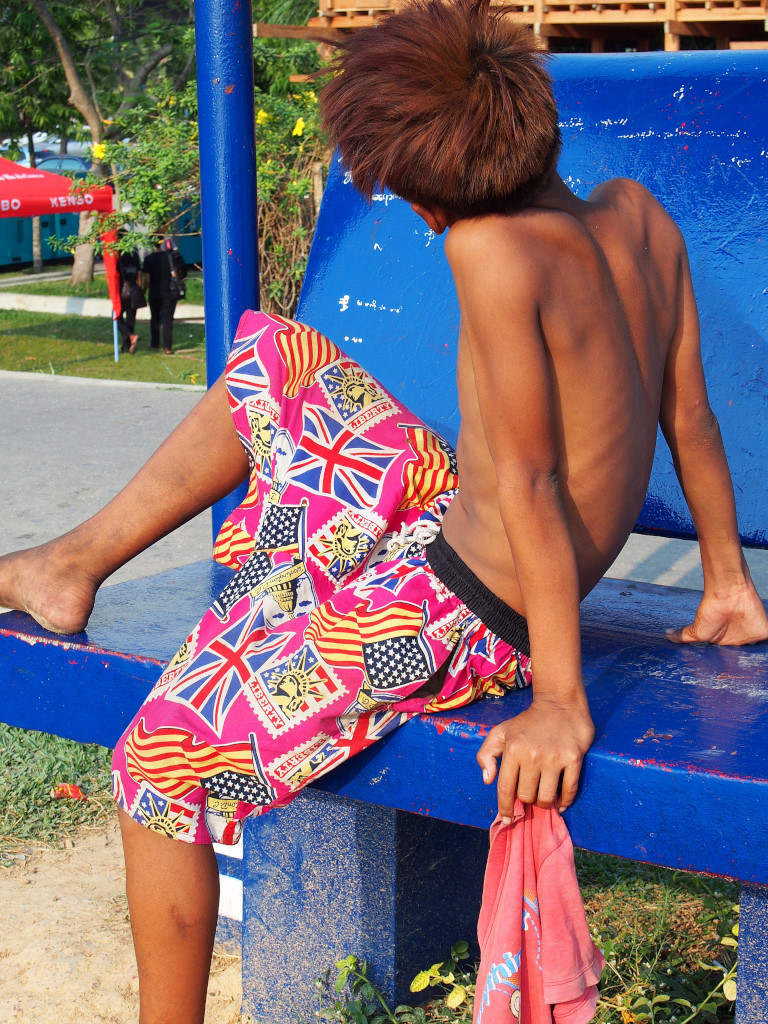 Mandalay would be a bad choice, as it is much further to the north, but what about somewhere en route? Phone calls ensue, and it now turns out they can procure tickets to Shwenyaung, although I have no idea as to where that is. I look on the map – it’s the town directly to the north of Nyaungshwe, and I don’t think I could have gotten luckier than this. The bus should depart at 7 pm, which means that I gain most of the day tomorrow, and upon arrival in Shwenyaung early in the morning, there should be ample local shuttles to my final destination.

Out of the fray of the bus ticket vendors – and now somewhat exhilarated and soaking wet, onto a local bus heading towards Inya Lake, the bus squeezing along the too-narrow lanes on the eastern periphery of Shwe Dagon, the road lined with atmospheric traditionally designed monastic compounds, the claustrophobic residential quarters subdued in the flat late afternoon light, the tall spire of the temple glimmering further to the west. 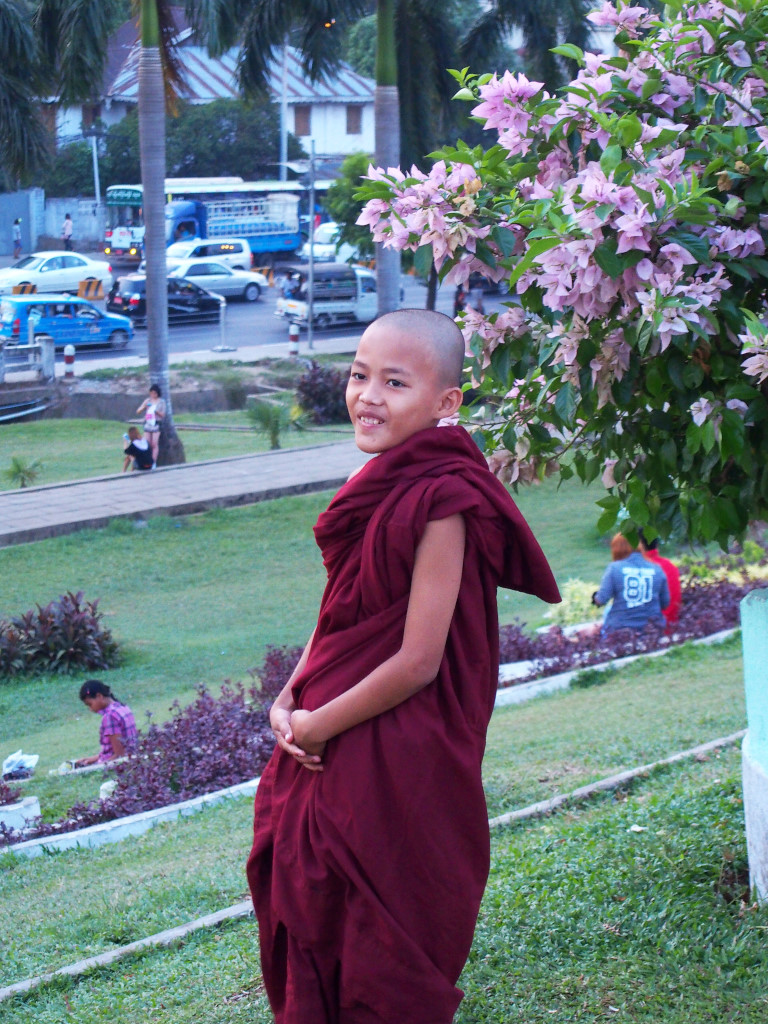 The road weaves through the characteristic mix of affluent and déclassé, the bus conductors initially denying that the waters appearing behind the embankment decorated with ornately trimmed shrubbery correspond to Inya Lake. How can that be? I was specifically told when I passed by here some time ago that this was Inya Lake, looking up at the familiar luxury hotel towers that appears so unusual in the otherwise disheveled fray of the city – so how can it not be now?

They concede that I am right, and now it is up to me to attempt to cross the morass of traffic spanning umpteen lanes on this central Yangon thoroughfare. Fortunately, a traffic light beckons, eventually turning red, the quiet waters of this corner of the expansive lake shimmering in the late afternoon light, the thick canopy of green and palm trees painted in dense brush strokes against the far shores. Picturesque, admittedly, but certainly the narrow grass slopes on this side broker no match for the spectacular layout of Kan Daw Gyi Lake. 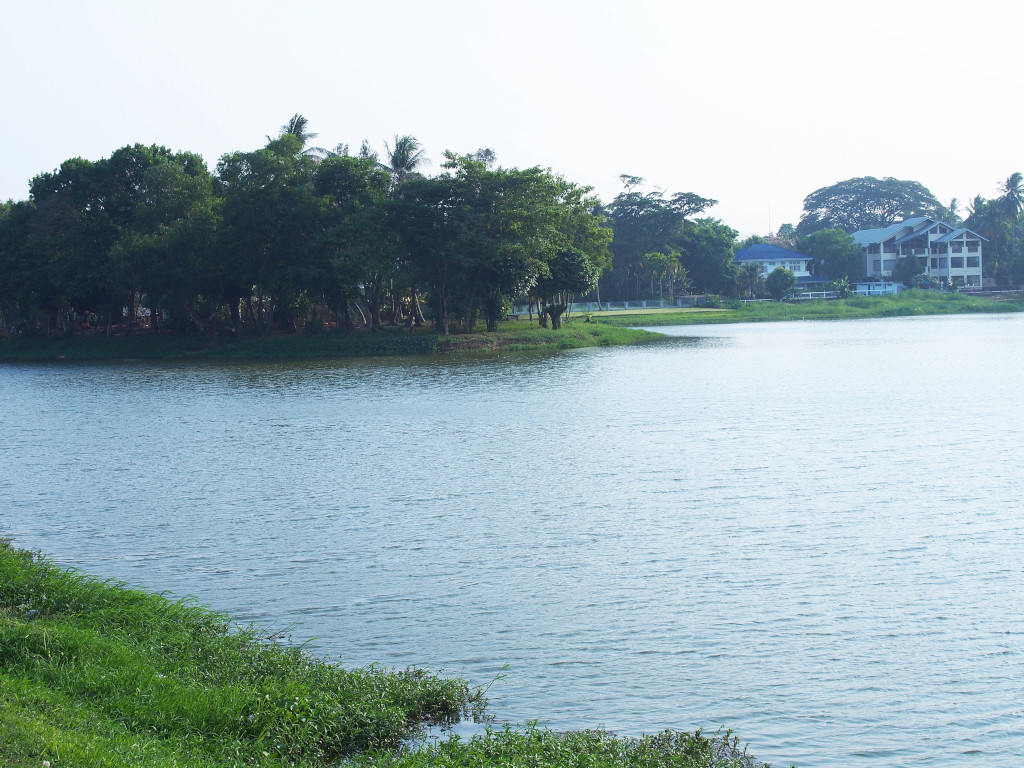 On the other hand, the thoroughfare is lined with multi-story scaffoldings being erected for the sole purpose of drenching anyone and everyone who passes by during the water festival. I am trying to figure out how to keep my recently acquired camera from getting drenched, given that I don’t even have a dry bag with me – and just when I seem to have regained my footing, I don’t want to have to lose another camera to circumstance. 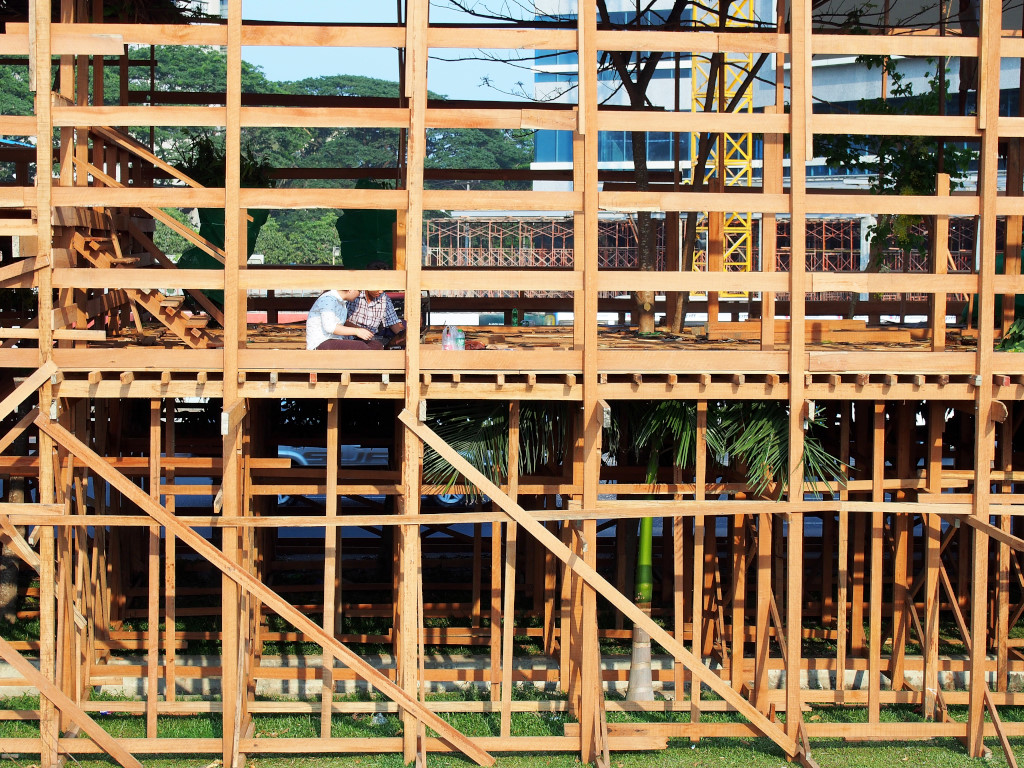 The southeastern corner of the park opens up to a somewhat unkempt marshy expanse and some decrepit houses running west along University Road, the target for any foreigner’s attention the house with high walls spanned with coiled barbed wire, discreet NLD signage in front, and a series of faded red flags atop poles – the residence Aung San Suu Kyi spent 24 years locked up in, now probably enjoying the fruits of her freedom somewhat.

In any case, there is definitely no welcoming committee, nothing other than a few barking dogs and people gathered at the small chapel on the lake extending out from the Taung Pulu monastery. Young monks stripped down to their undergarments are playing in the water next to the monastery, washing themselves, their clothes, or just hanging out.

Interestingly, the massive concrete block U.S. embassy is located a short walk to the west, built here immediately after the thaw in relations with Myanmar, the new prized possession in America’s attempt to brace itself against China’s growing might in the region, and a powerful statement to the regime regarding its manner of treating the opposition. 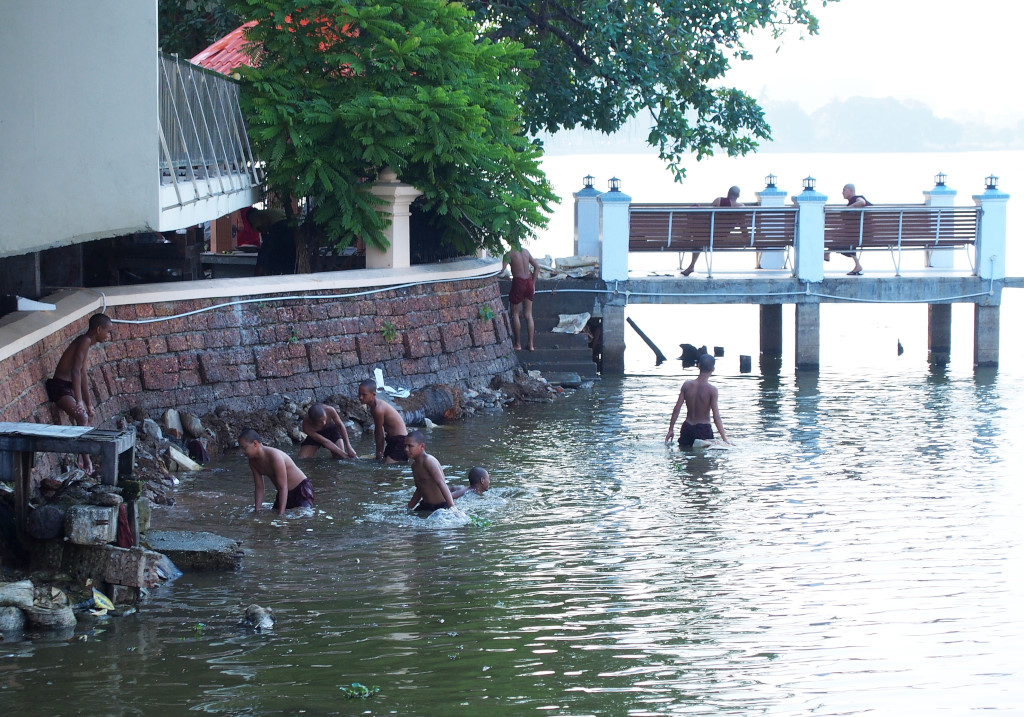 The guard warns me not to take pictures, which seems utterly ridiculous, although it’s not as if getting a photo of the squat concrete colossus would change much. Much more appealing is the rich carpet of green that abuts the tendrils of the ample lake meandering through the northern central confines of the city. Few foreign visitors are visible on the ground in this area, as the southern boundary of the lake is largely private, with no access provided from the street to the waterfront. 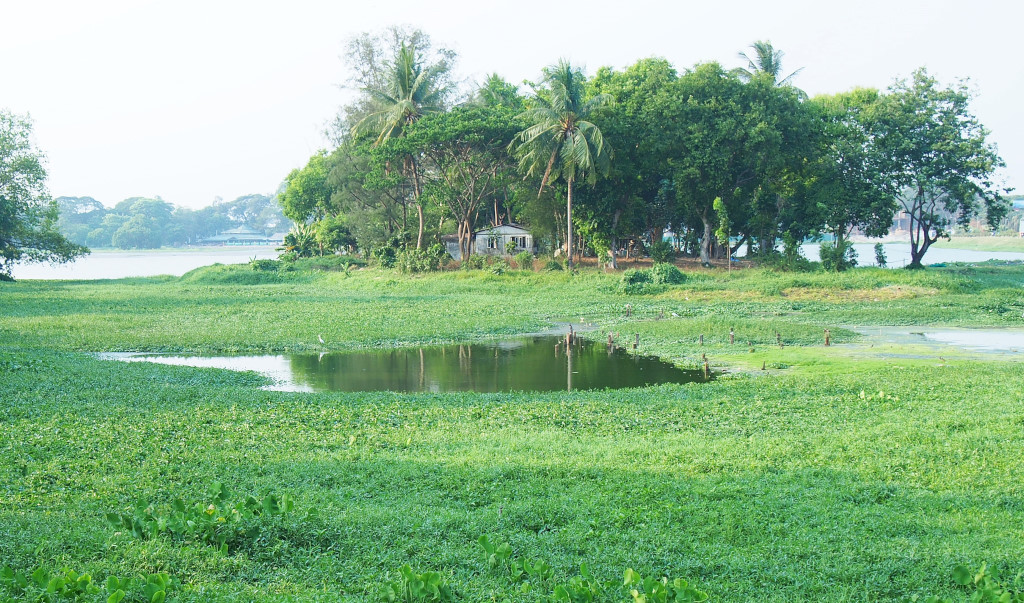 The southern border of the lake is purely residential, while the southeastern corner is dominated by the squat new towers in the process of being constructed, inevitably adding nothing to the aesthetics of the environment. I continually shudder to think of the direction Yangon will take, and how much like Bangkok’s concrete jungle it will become over the years.

Certainly, the city has the advantage of already having large dedicated green spaces, which gives it an advantage over Bangkok, which is overwhelmed by largely tasteless concrete structures, but has little in the line of redeeming green space. 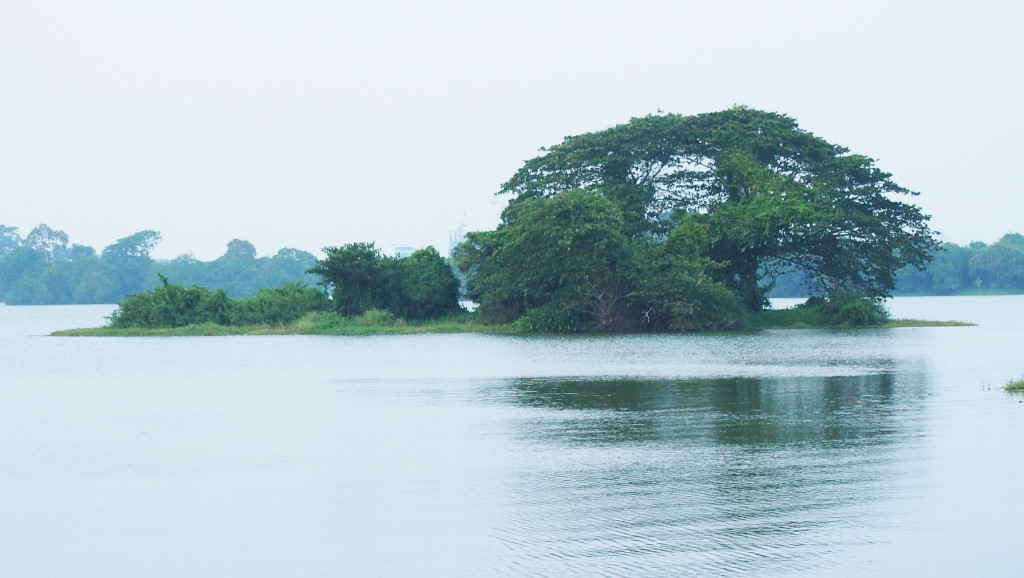 The villas located further to the west become larger and more outlandish in their feeling, undoubtedly reflecting the proximity of the owners to the centre of power in the country. The most grandiose villa located across from the back of the university on University Road is signed with a few dubious-looking ‘Diplomatic Quarters’ signs hung at odd angles, although the appearance of a row of new luxury vehicles in the parking compound prior to the gate being shut, at least one of which is a Rolls Royce, would cast suspicion on the inhabitants being mere diplomats. 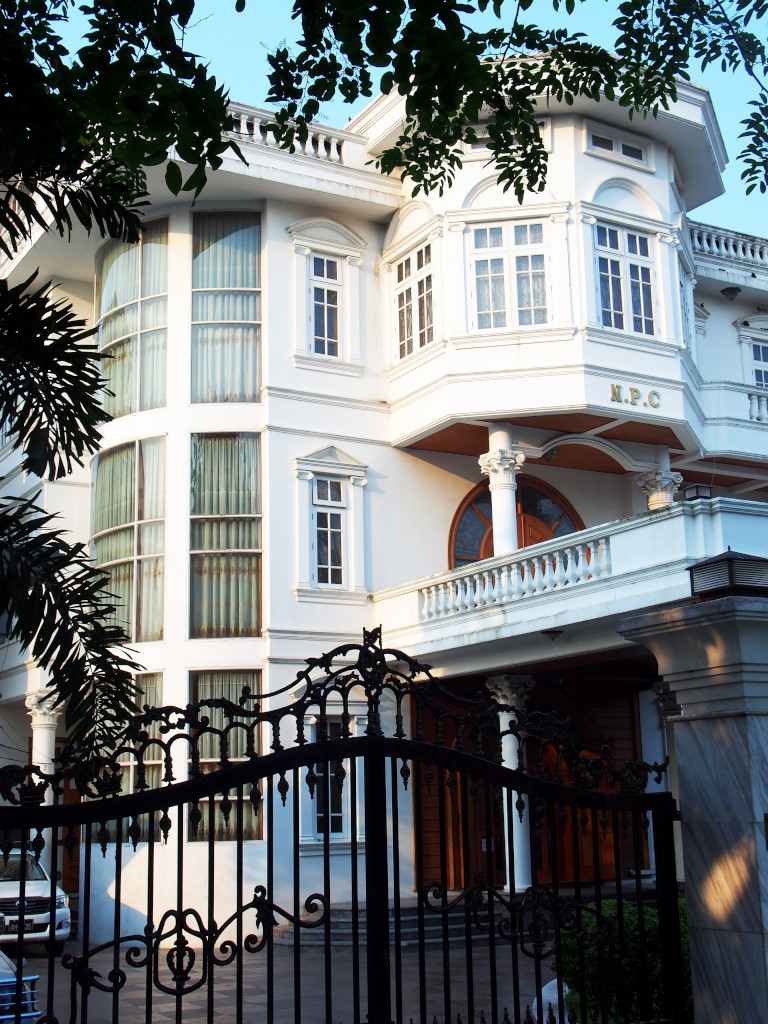 But no matter – the machinations of the country’s elite are no secret. My friend tells me that summary execution was the response by the perennial dictator Than Shwe to the family that insisted on payment for a necklace of glittering jewels for his daughter some five years ago. 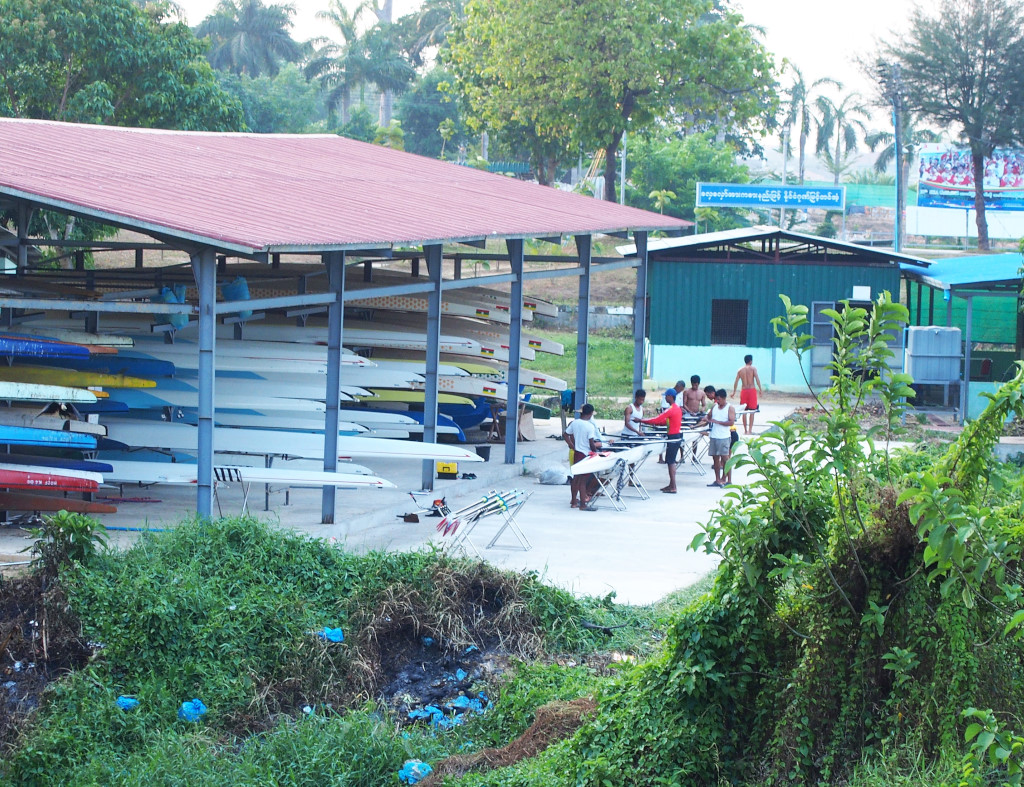 Somewhat more refined in its presentation, the various Yangon University Rowing and Sailing clubs are possibly the haven for the privileged, much as they are in other countries, not that people anywhere in Southeast Asia are big fans of water sports of any sort. The promontory below the sailing club is disheveled and atmospheric, the tip occupied by a large stone bungalow housing a Shan restaurant, whose tables spreading along the waterfront provide great views of the surrounding expanse of gunmetal waters. 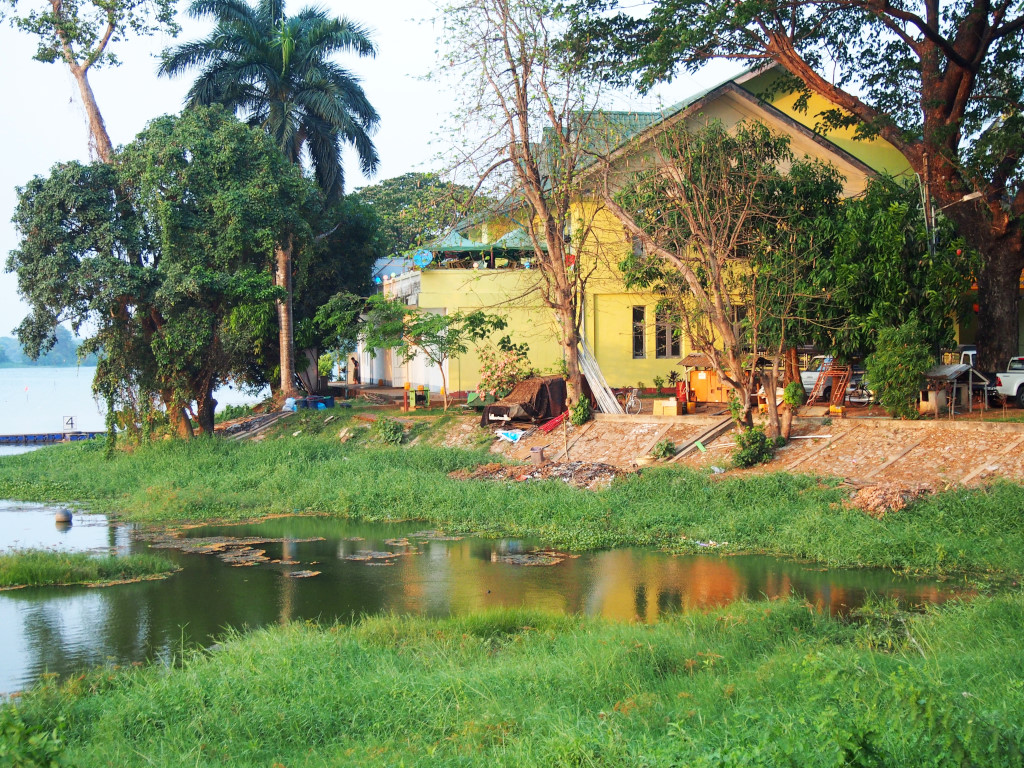 The traffic running along the road arcing between the university and the lake has ground to a halt, befitting the experience elsewhere in this already profoundly congested city. A number of paying attractions for the privileged line the road north of the rowing club. An overweight older Caucasian seated in front of the sailing club provides little incentive to enter, although in my sweat-drenched state, the only suitable attraction at this point would be a heavily air conditioned space.

A park with children’s rides in a carnival-like setting is followed by a swimming pool, not as fancy as the one at Kan Daw Gyi lake. An open-plan and slightly terraced park abuts the water, the entire lakefront crescent to the north dedicated to local eateries, and one of the few chances to get a decent meal of any sort prior to returning to the hotel, considering the spotty patchwork of street life in this eminently spread out city. The few traditional salads I try here are far from memorable. 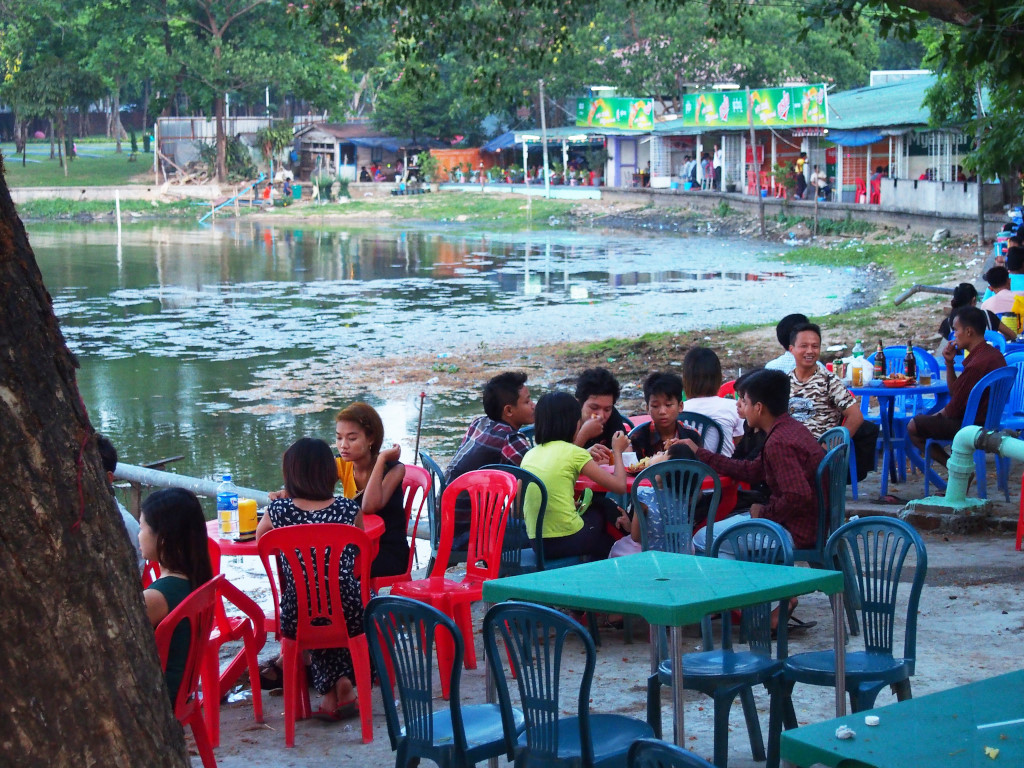 Returning to town, the bus rambles along Pyay road, one the major north-south arteries of the city, dropping me off across from the southwestern corner of the Yangon Regional Parliament and in front of the Water Library, the restaurant very expensive even by western standards, with unrivaled pretensions of hauteur. I am not sure to what extent I would be motivated to spend my own money to find out how truly memorable the place is, as opposed to just being a place the moneyed elite comes to be seen. 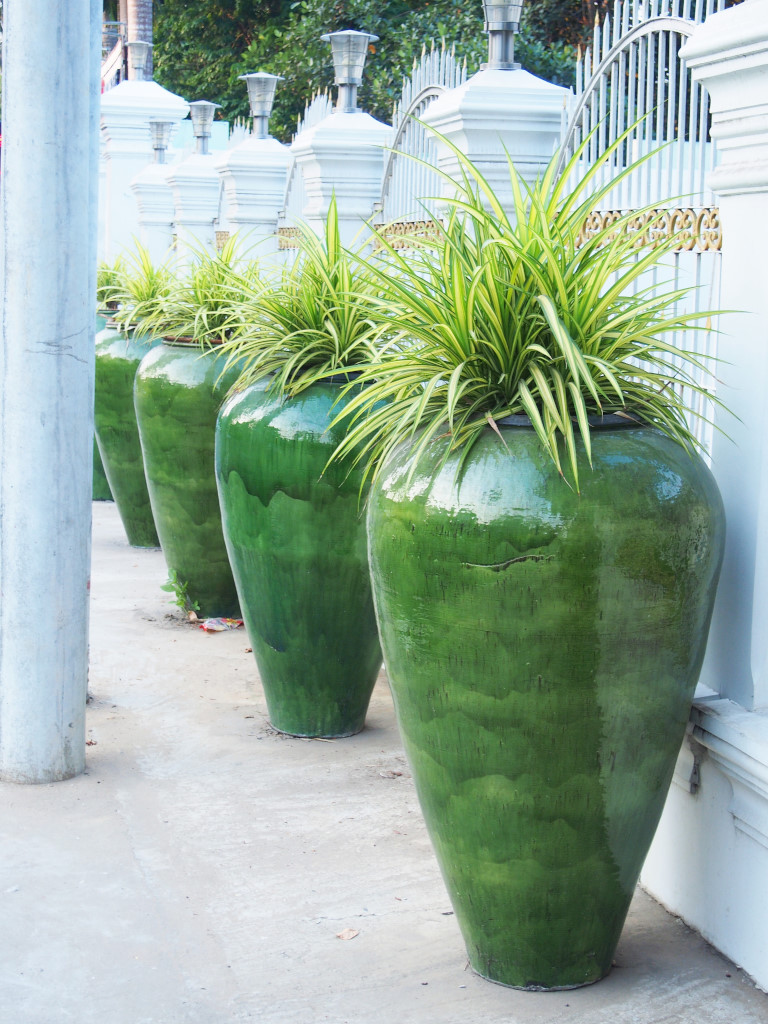 Ahlon road leads past the darkened villas and rambling lots, much farther to the west broaching more modest but also far more lively quarters, replete with small but comfortable roadside eateries, including a sprawling and efficiently-run local restaurant focusing on Shan and other Myanmar ethnic foods, the northern specialties I order simple, but bordering on the sublime. 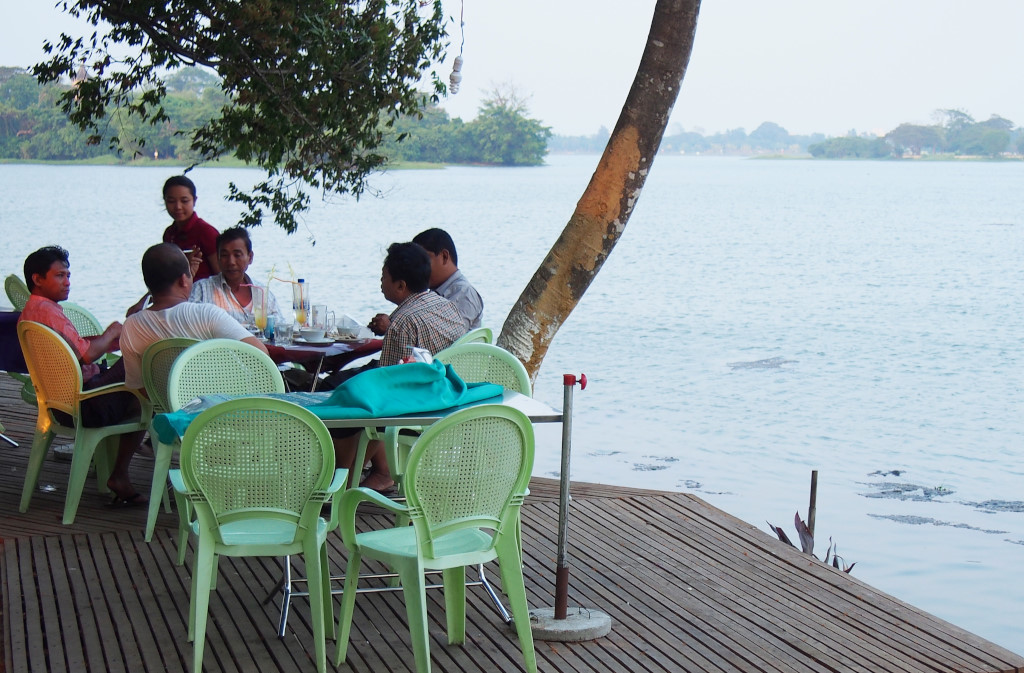