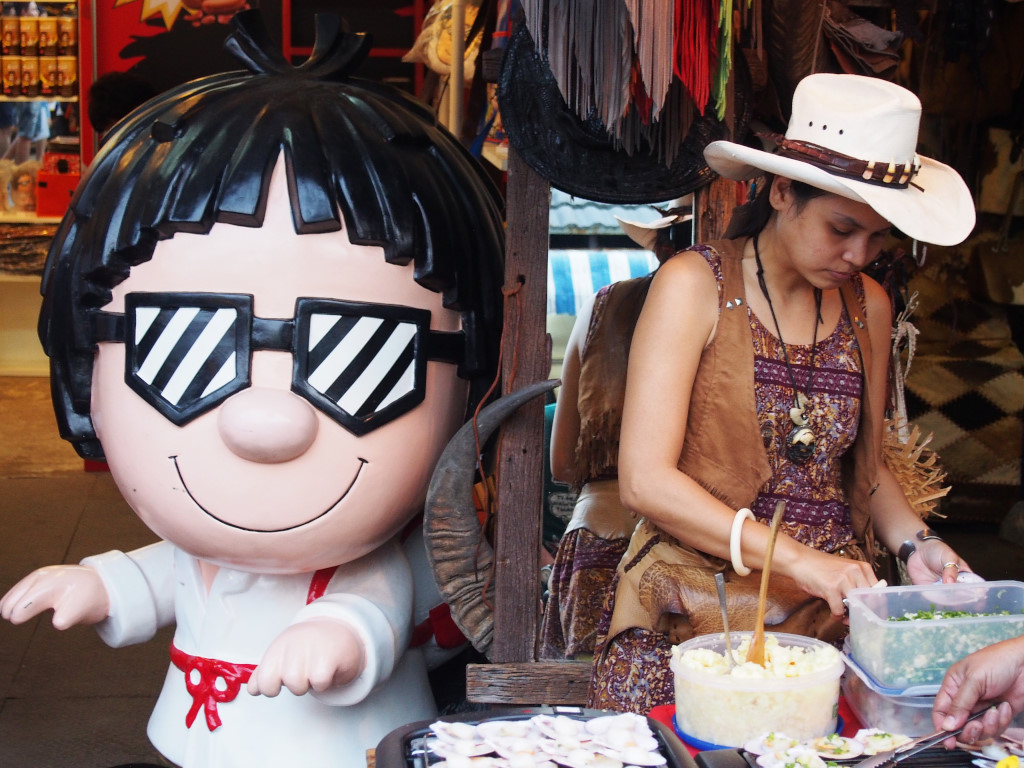 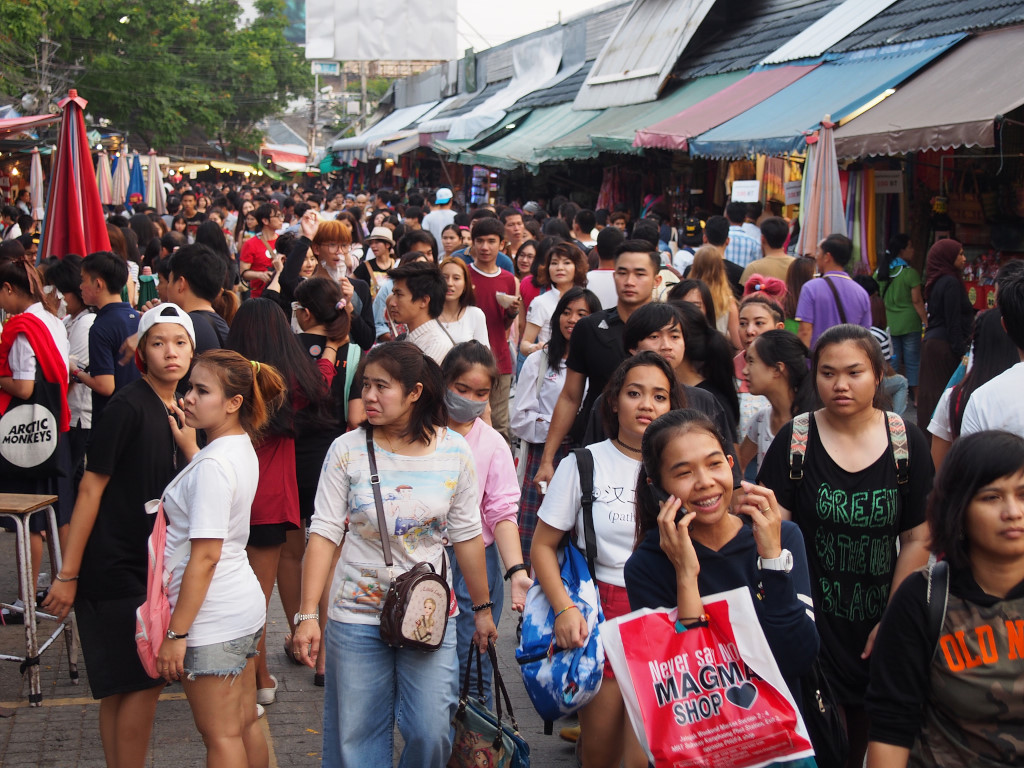 The only excursion mapped out for the day is a visit to the Chatuchak market, which, according to the travel guide, is one of the primary attractions of Thailand. Such an assertion beggars belief, considering that not just Thailand but all of Asia is saturated with markets. The market is not located at the eponymous metro station but Kamphaeng Phet, one following Chatuchak Park. No matter, it is on the same subway line, and hence it doesn’t take an incredibly lengthy trek to get there. 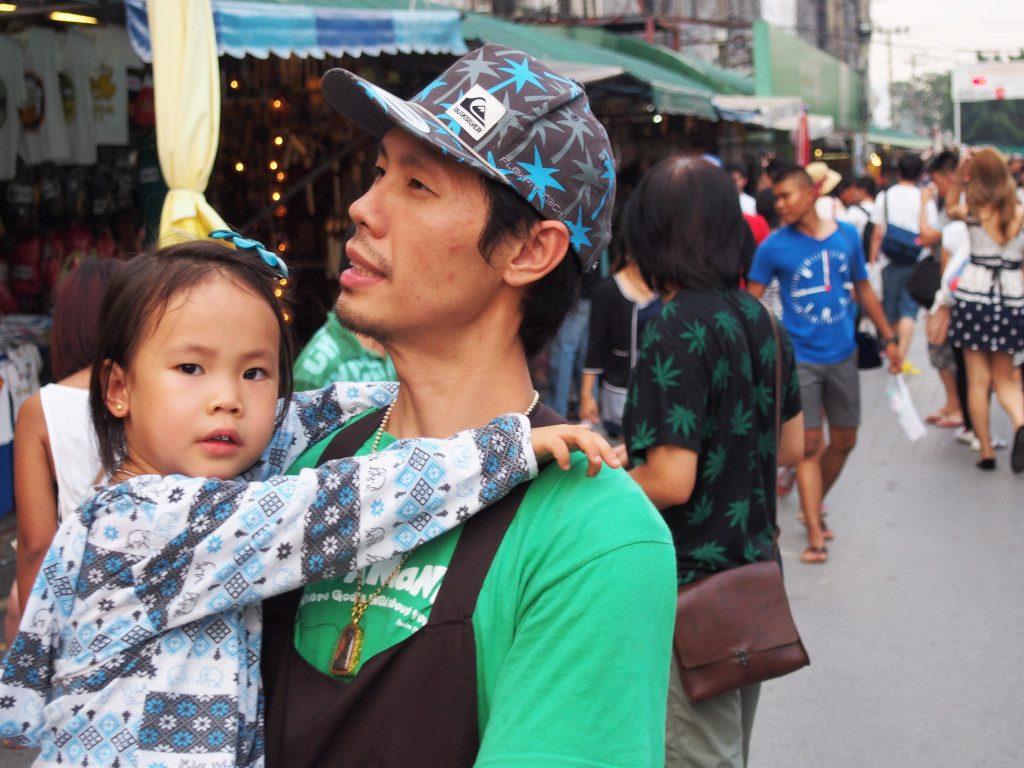 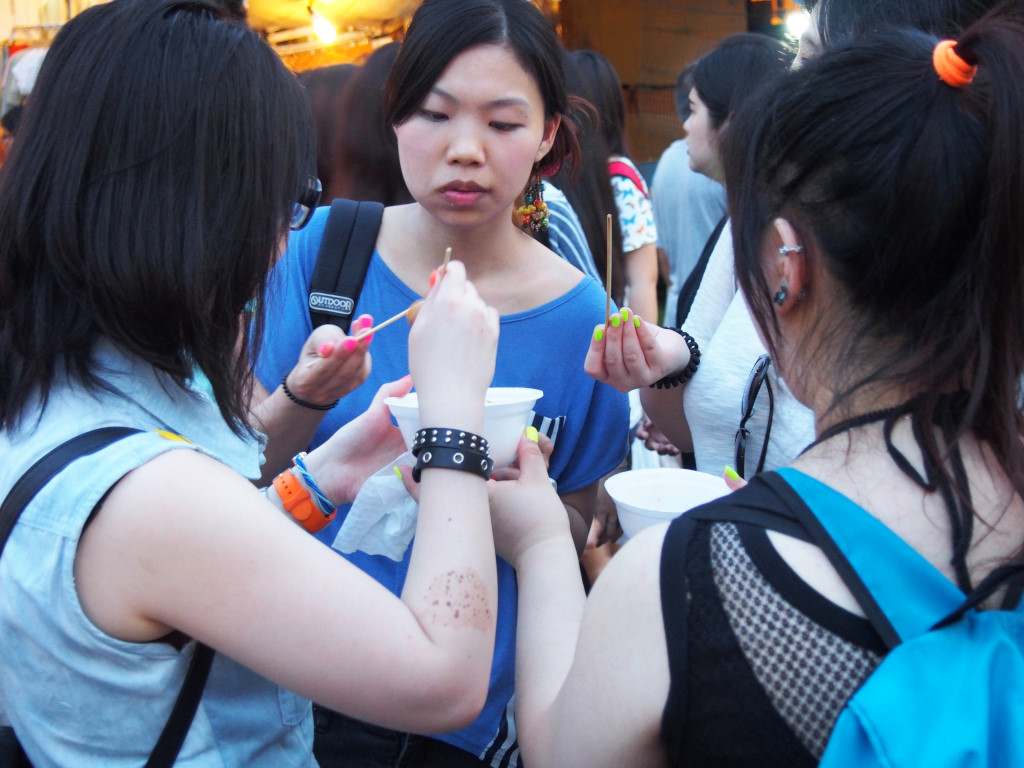 At the station, signage points in the direction of the market, which begins immediately outside the metro station entrance. It occurs to me that the signage in the metro stations has a distinctly German feeling, what with the fonts and the Lufthansa-styled yellow on blue, probably not the most popular concept in the world at the moment, given the recent Germanwings crash in France. The sleek efficiency of the Bangkok metro system contrasts with the folkloric chaos on the street. 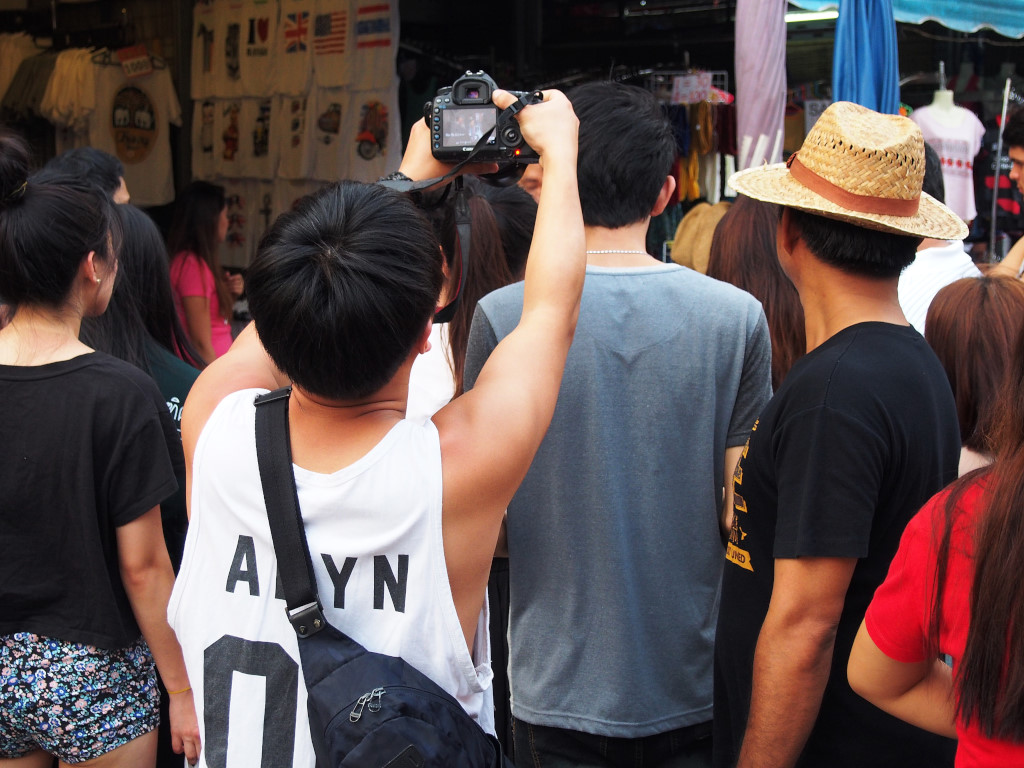 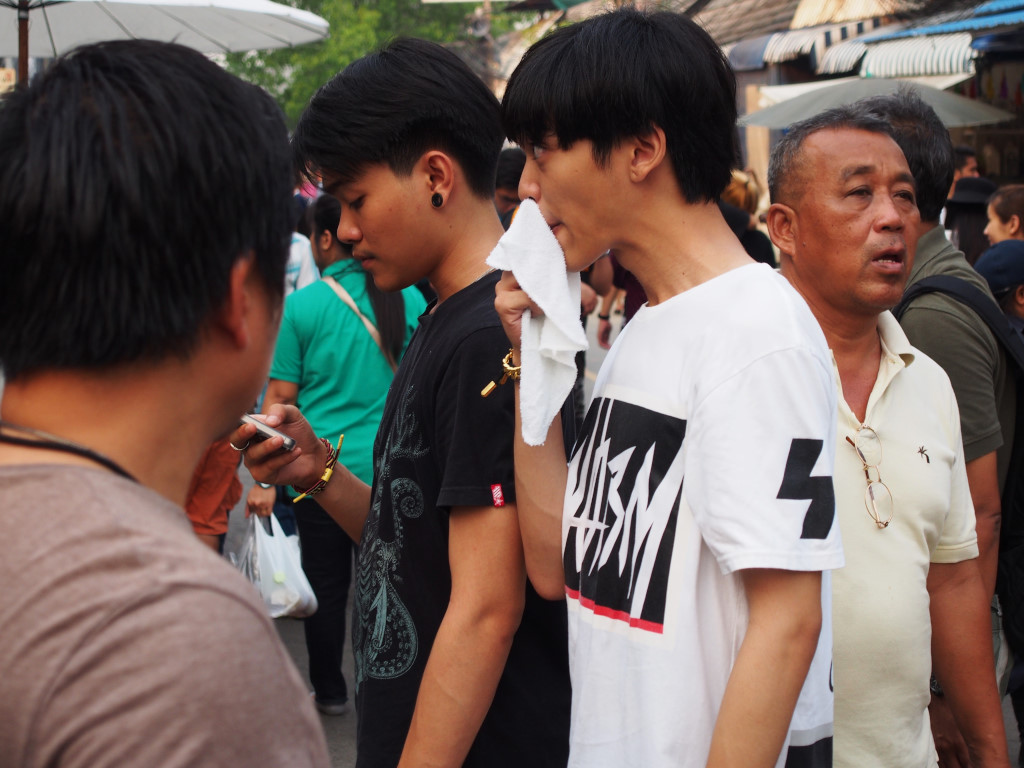 The market is very large, essentially a vast square with an open passage circumnavigating the entire area, the interior a dense grid of passages asphyxiating with small shops. I never penetrate the interior of the market, walking only around the periphery, as it is enough to get the essential idea of what the market offers. 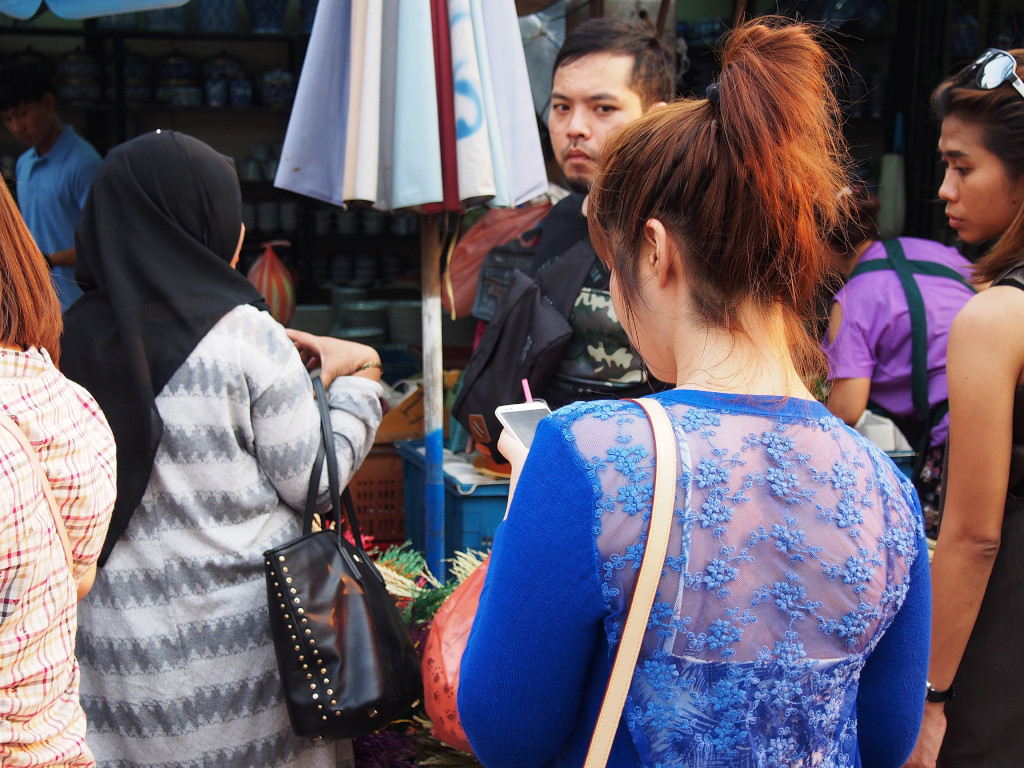 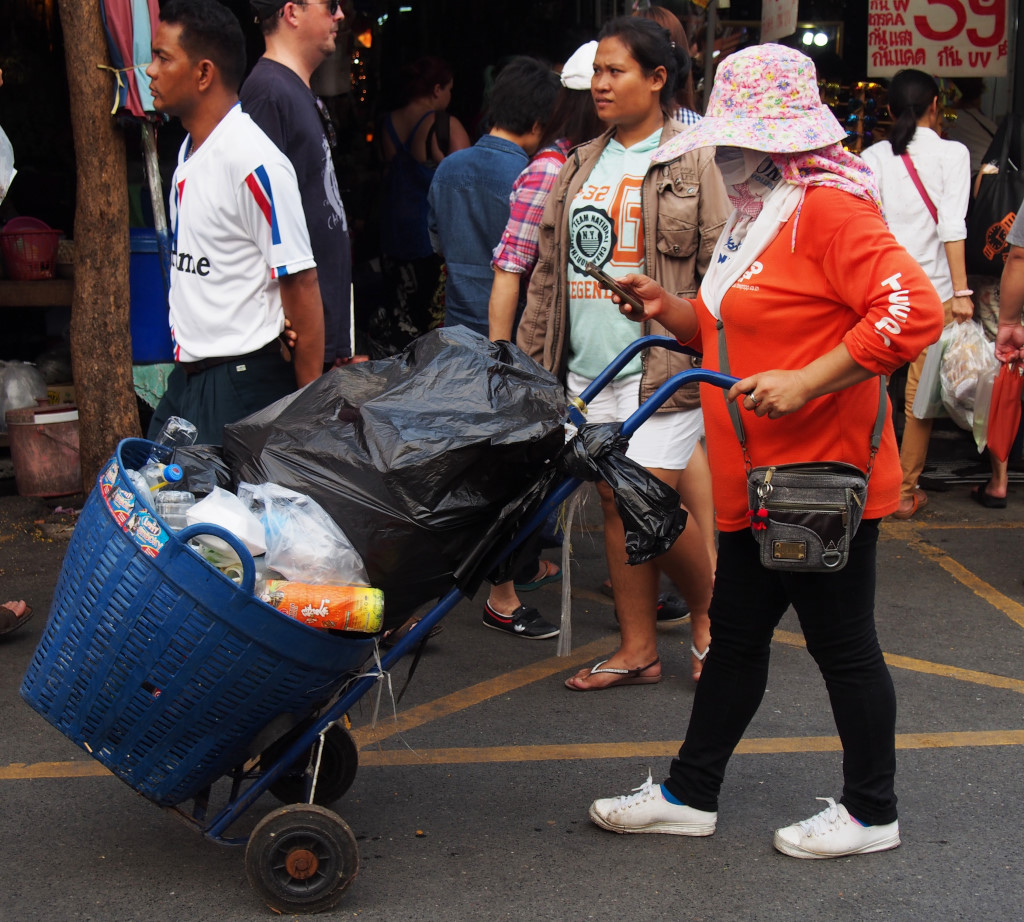 Profuse in its offerings but clean cut and tidy, the market is essentially of a farang nature, in that it is sufficiently palatable for foreigners, clean, organized, signed in English, and decidedly more expensive than an authentic local market. The market offers a wide variety of practical goods, snacks and drinks, the food items spanning the gamut of items offered on the street in Thailand. 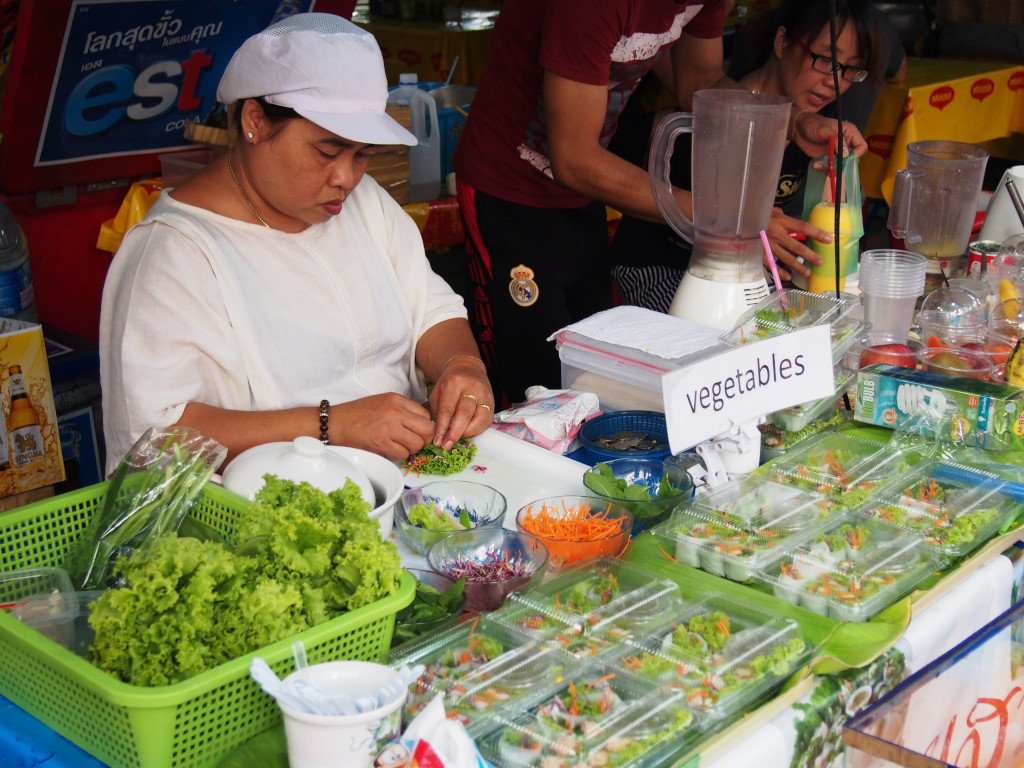 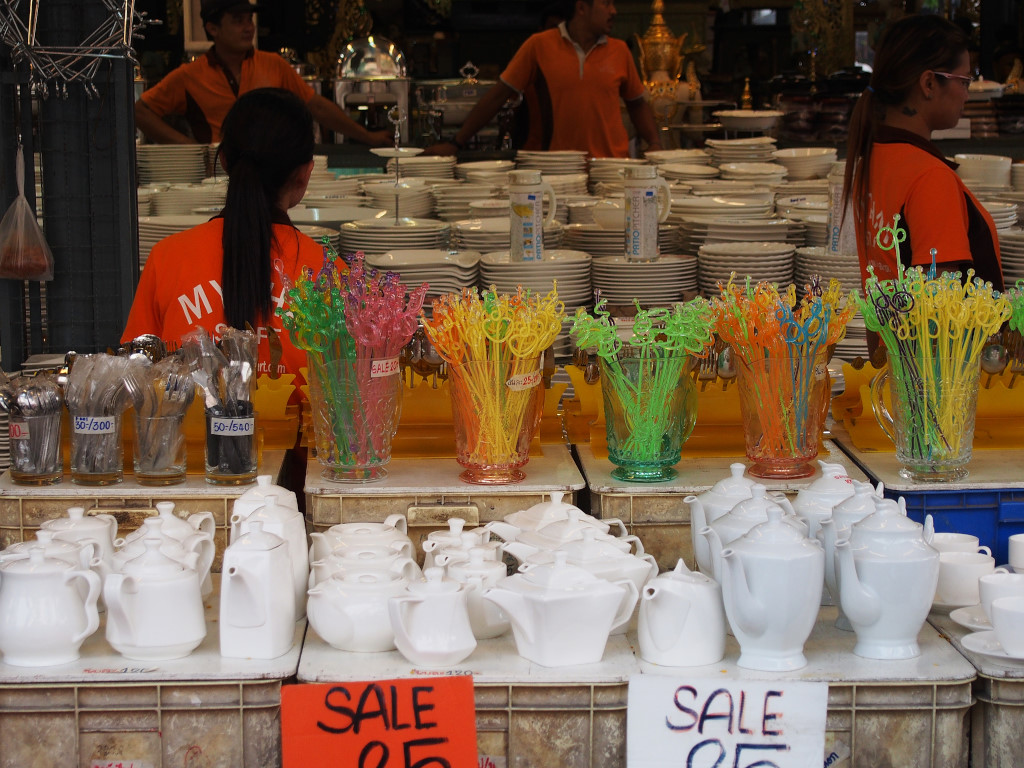 The many gift stands cater to the recreational side of the market’s audience. People are really just here for the ambiance, the vast majority of visitors local and mostly young. 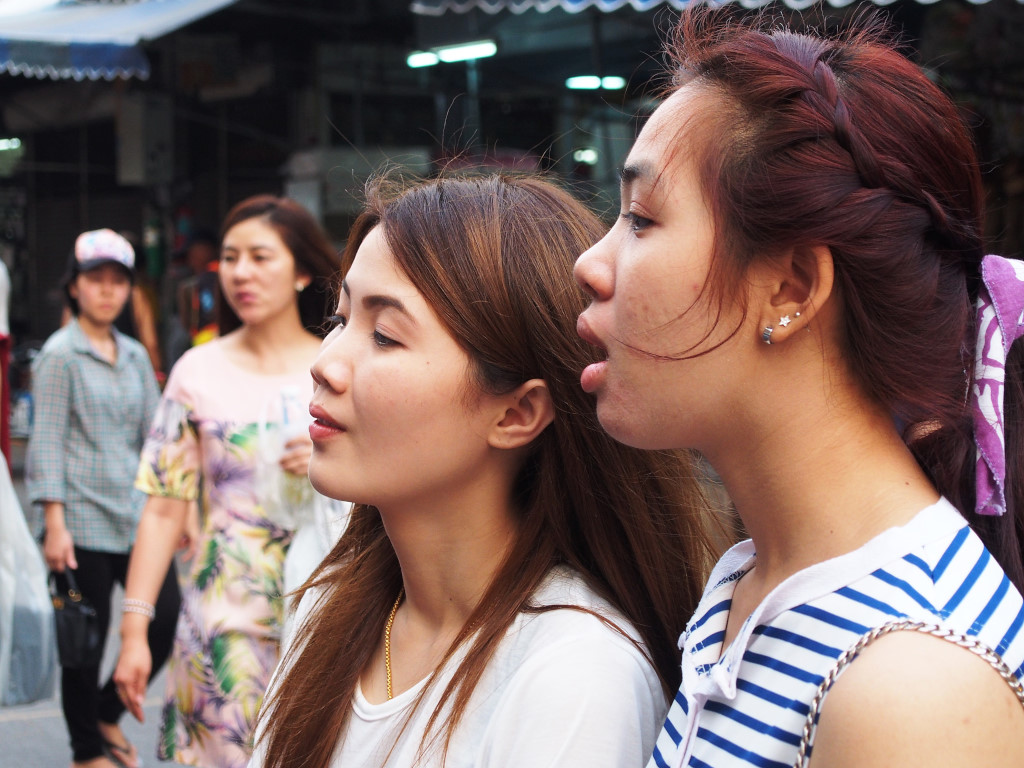 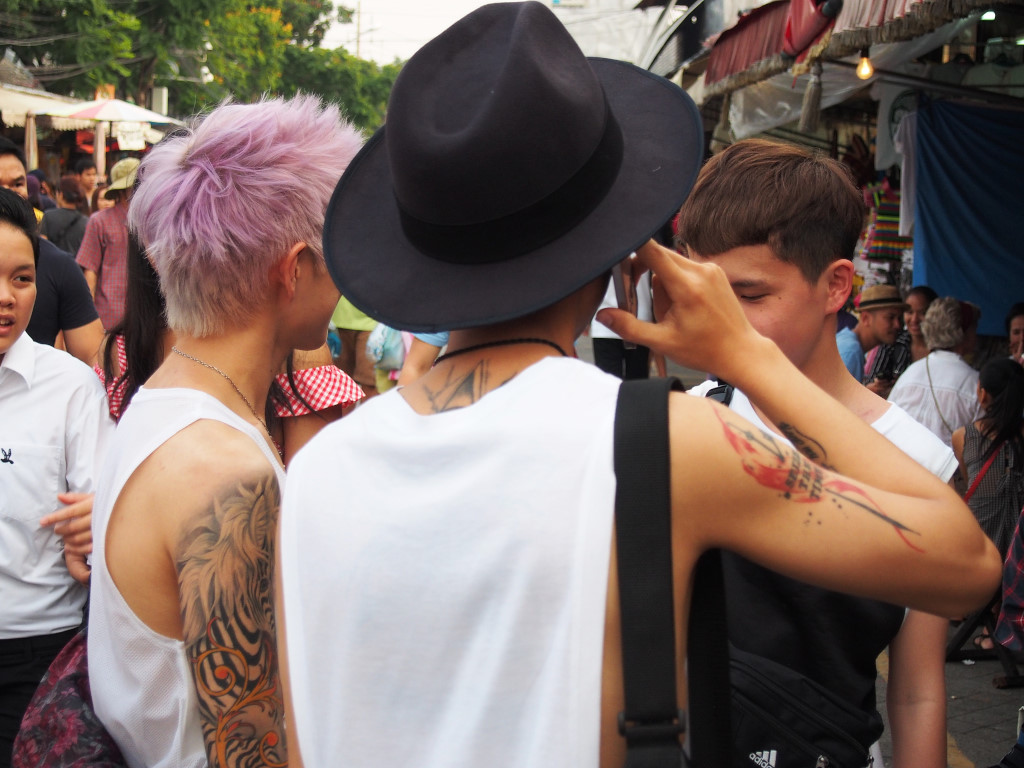 Most of the farang here seem like legitimate tourists and backpackers rather than the ancient men with young local girlfriends that seem to inundate the tourist attractions in the country. A lot of Indian and Muslim tourists are in evidence in the market. It’s unlikely locals would come here to buy goods inasmuch as the market has higher prices than regular markets, even if Asians love their shopping opportunities. Incongruous among the hordes of visitors are the heavily swathed maintenance crews, by the looks on their faces and body language not having the times of their lives, patiently biding their time. 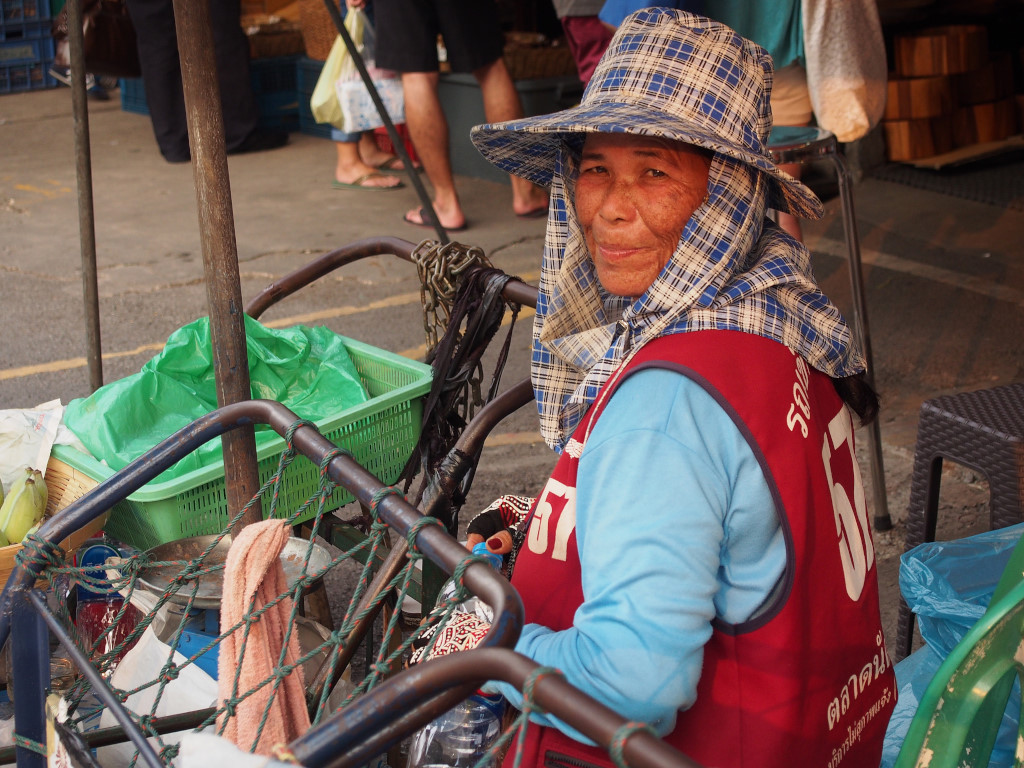 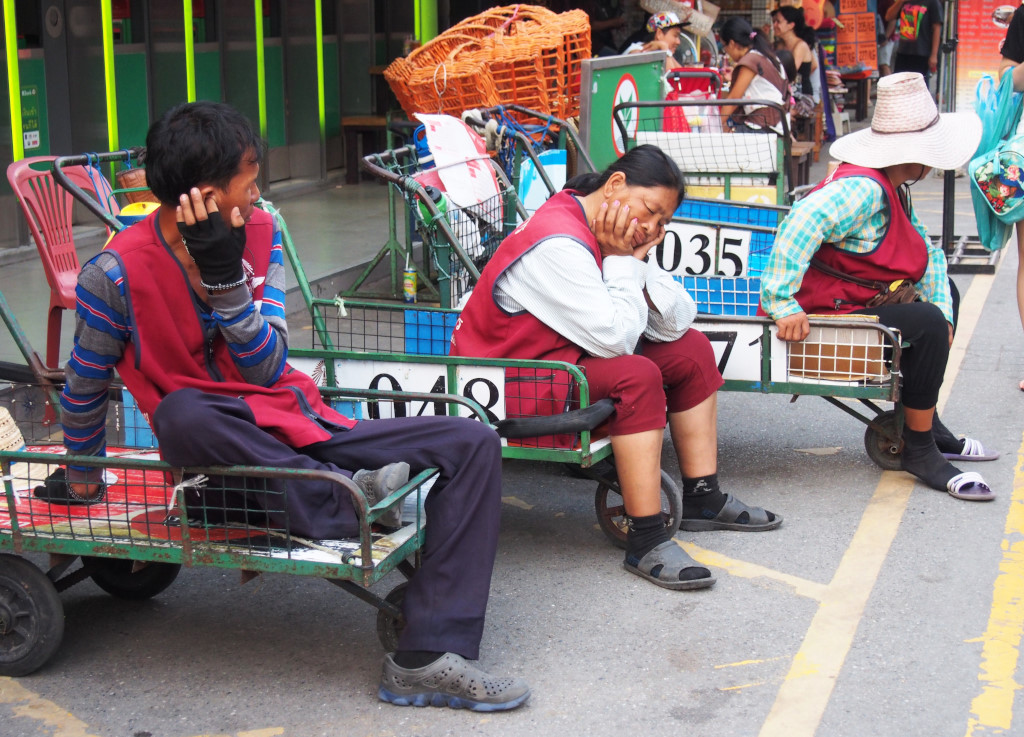 Curiously, there is a large security and police presence. A handful of sit-down eateries and even some bars are in evidence, one with a DJ spinning tunes attracting a hipper crowd, not that this market is in any way hip in the western sense of the imagination. 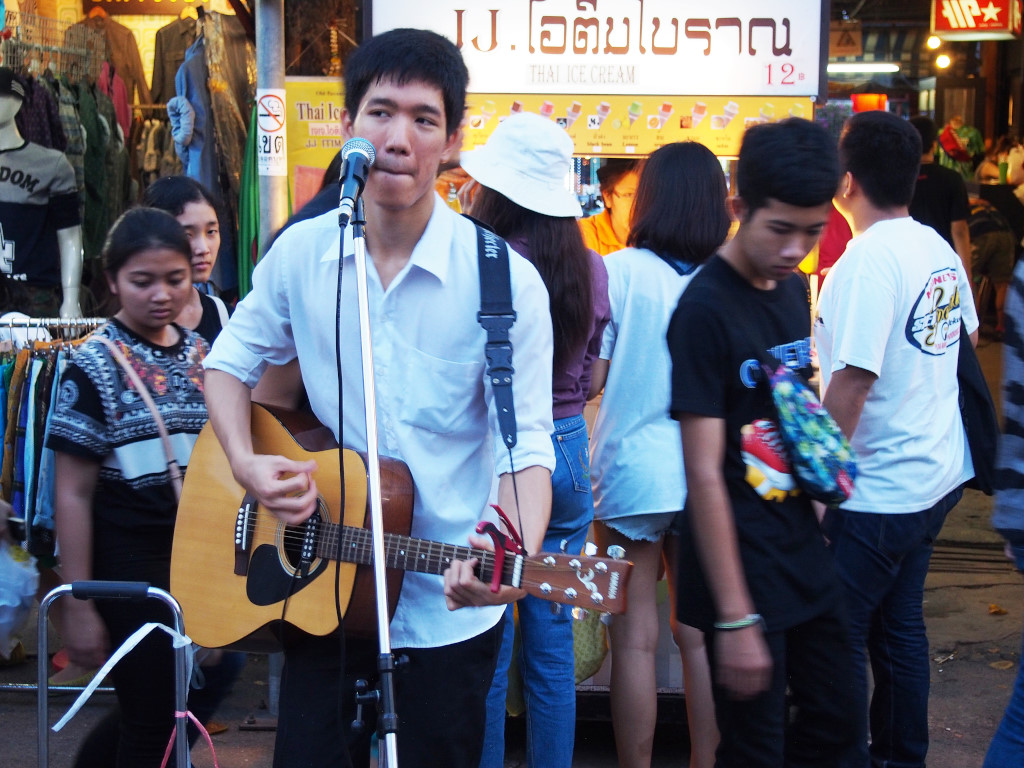 Not all vendors look particularly thrilled, stuck amidst the morass of other vendors, trying to sell a few modest items in the course of the day. Many vendors adopt a passive role, waiting for business, although some offer products that are popular, while others go out of their way to sell their products either aggressively or with gimmicks. 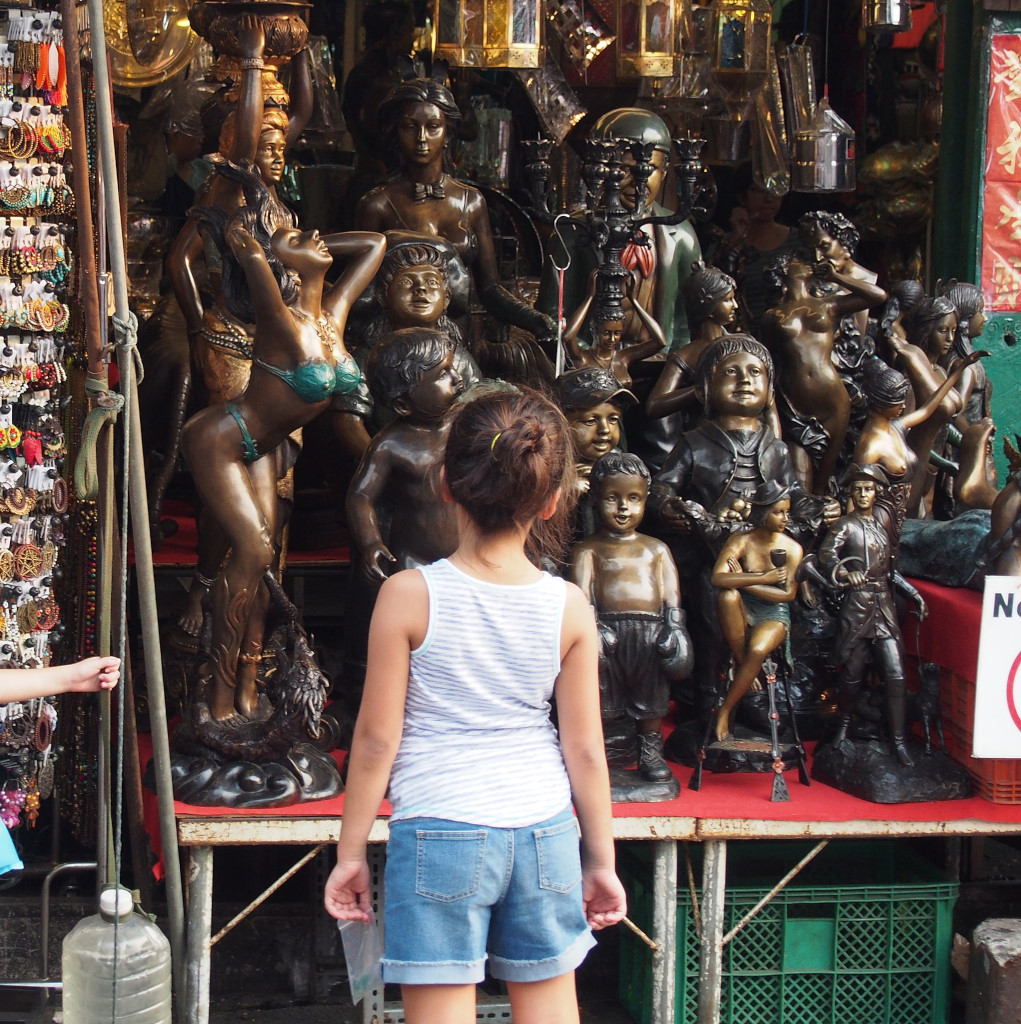 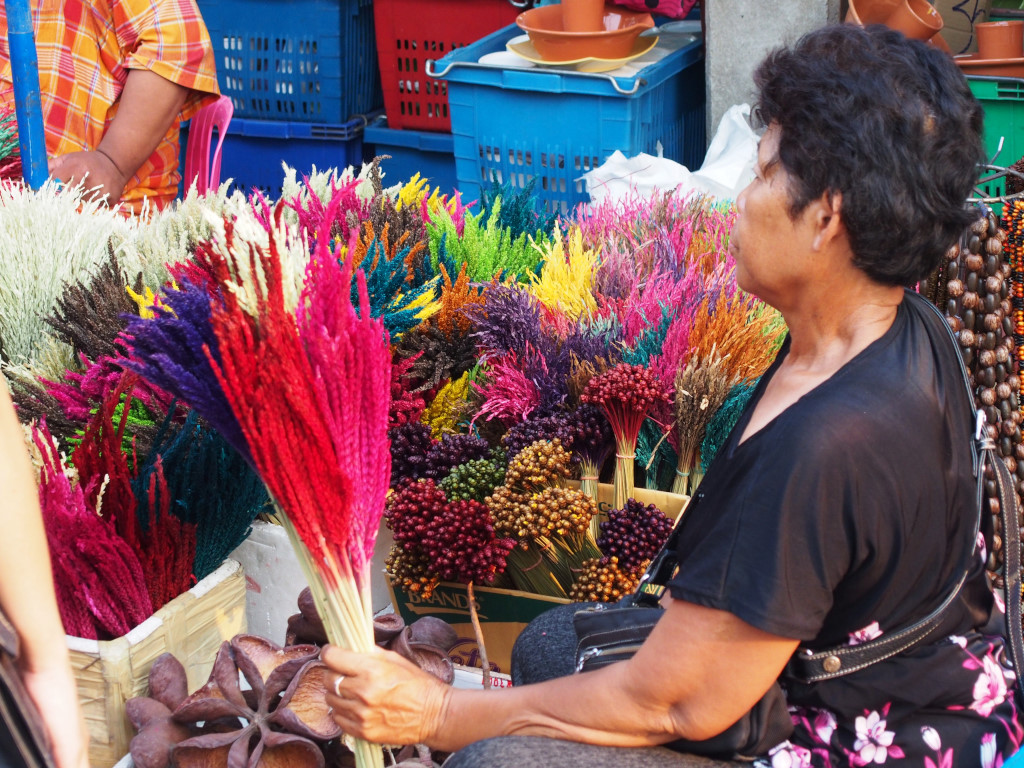 There are some unusual touches, such as the older Thai men dressed up as cowboys and playing bluegrass music. A number of other small musical presentations are located along the passage around the market, in some cases involving very young children. Also somewhat strange is the number of people I see hauling suitcases through the market, as if they just came from or were en route to the airport. 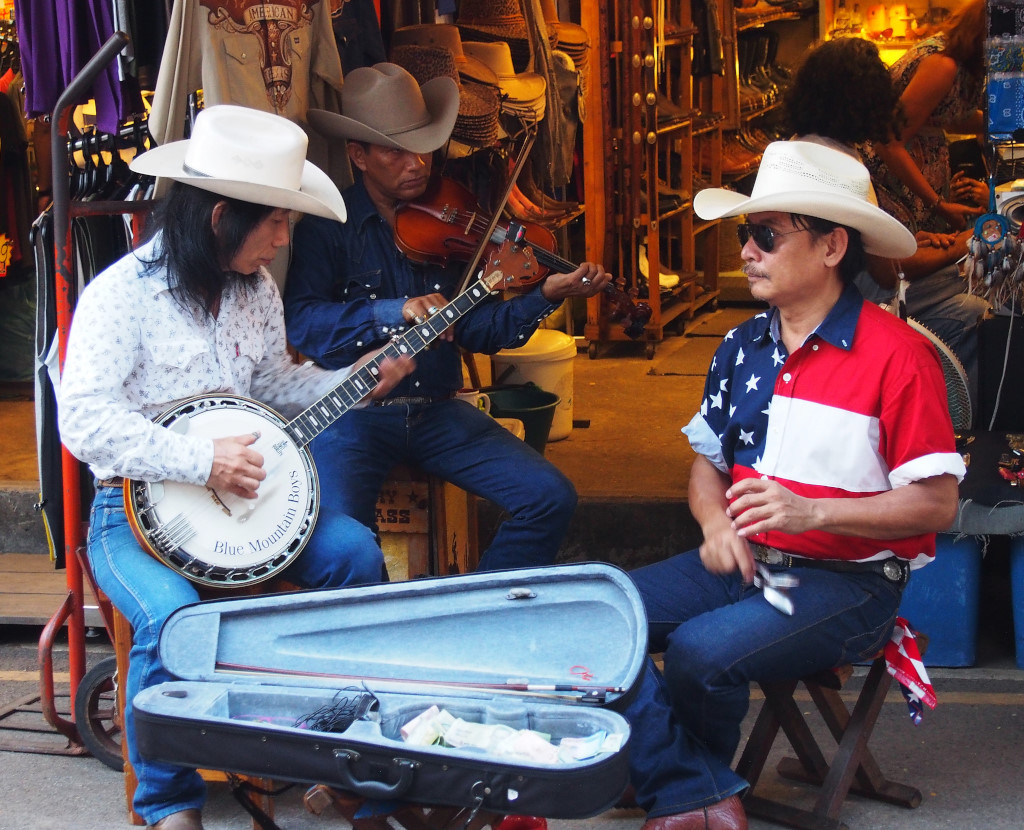 The crowds build as the evening progresses, which doesn’t make sense, considering the market is supposed to wind down by 7 pm. The people I shoot photos of are surprised and delighted at being the subject of someone else’s photos, especially the ones posing for group selfies. It’s simply fun to take photos of people just milling around. 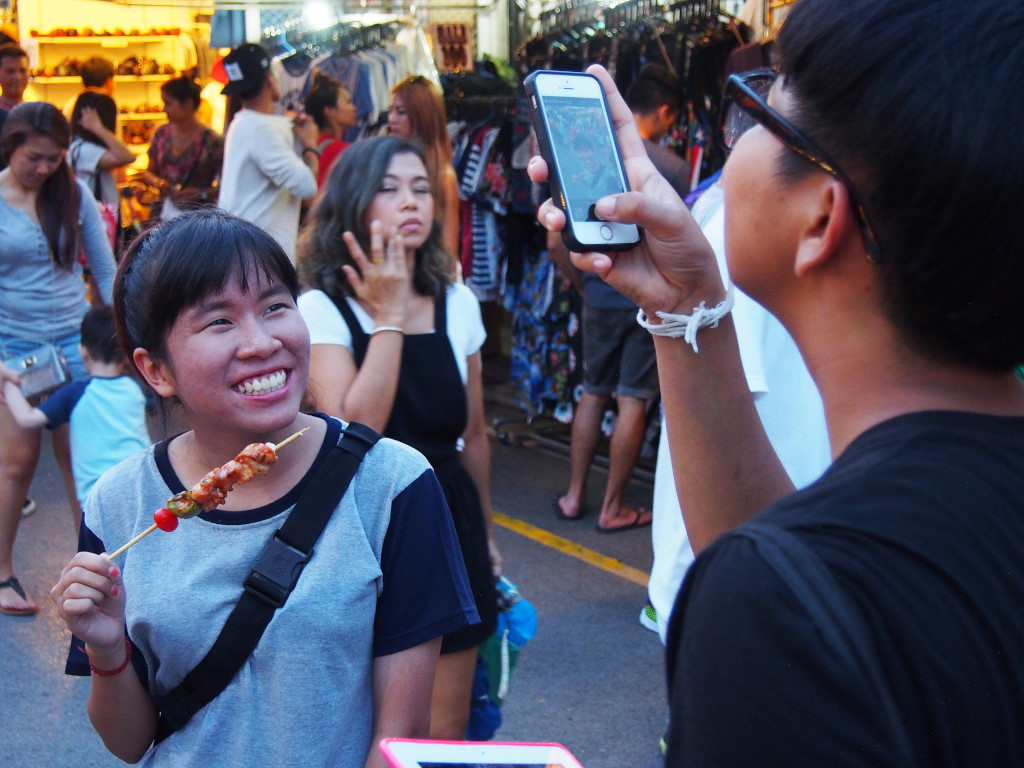 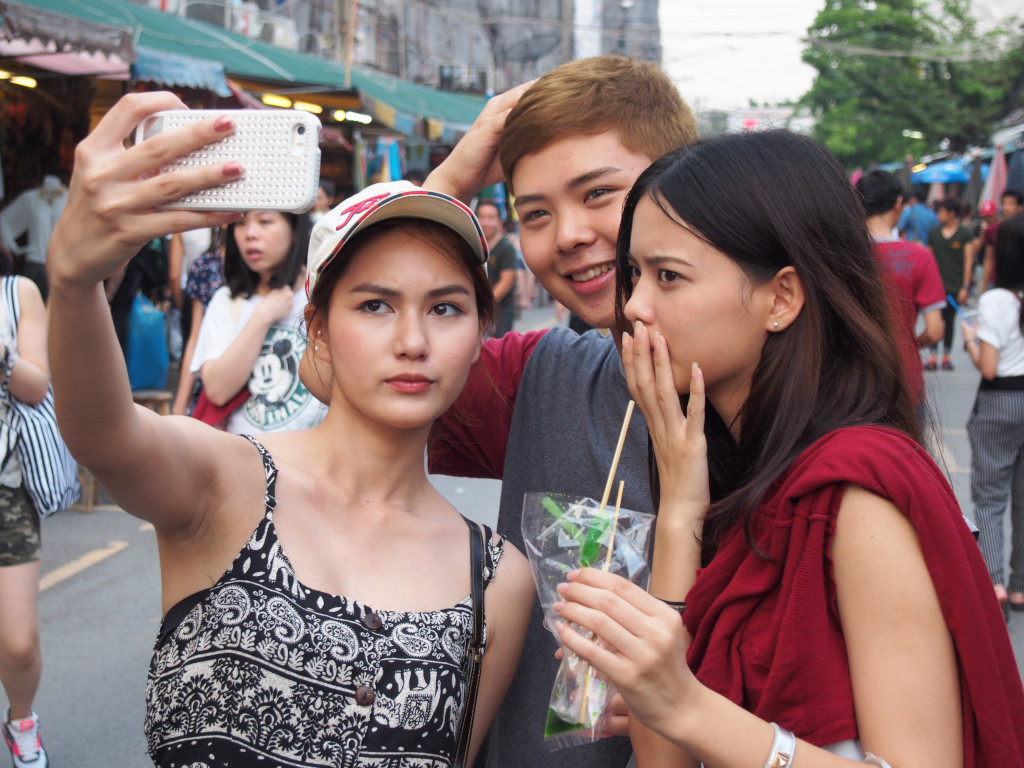 The day is really also intended to inaugurate my new camera, and I am not really completely comfortable with several aspects, such as not being able to centre subject matter through the view finder, not having granular focal points, and not being able to control lighting via exposure compensation, which I use a lot on the larger DSLR. When it gets darker, I wind down the photography effort, as the night time shots become poor quality, reflecting a garish colouring and lack of proper focus. This is definitely a weak spot in my photographic skills. 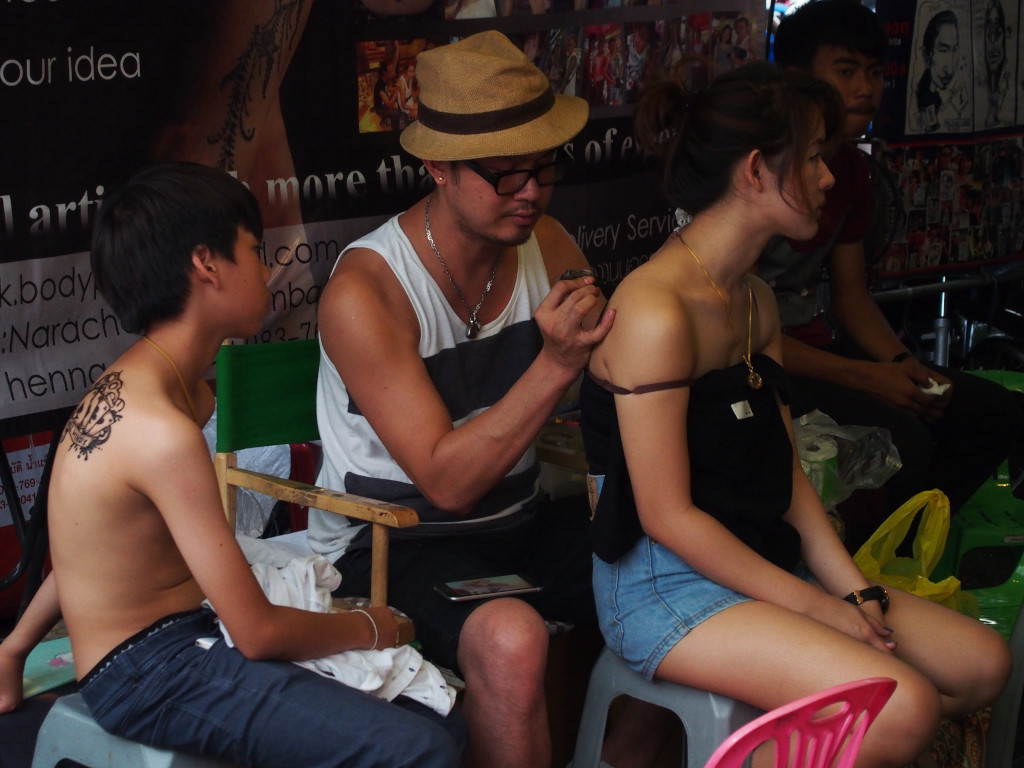 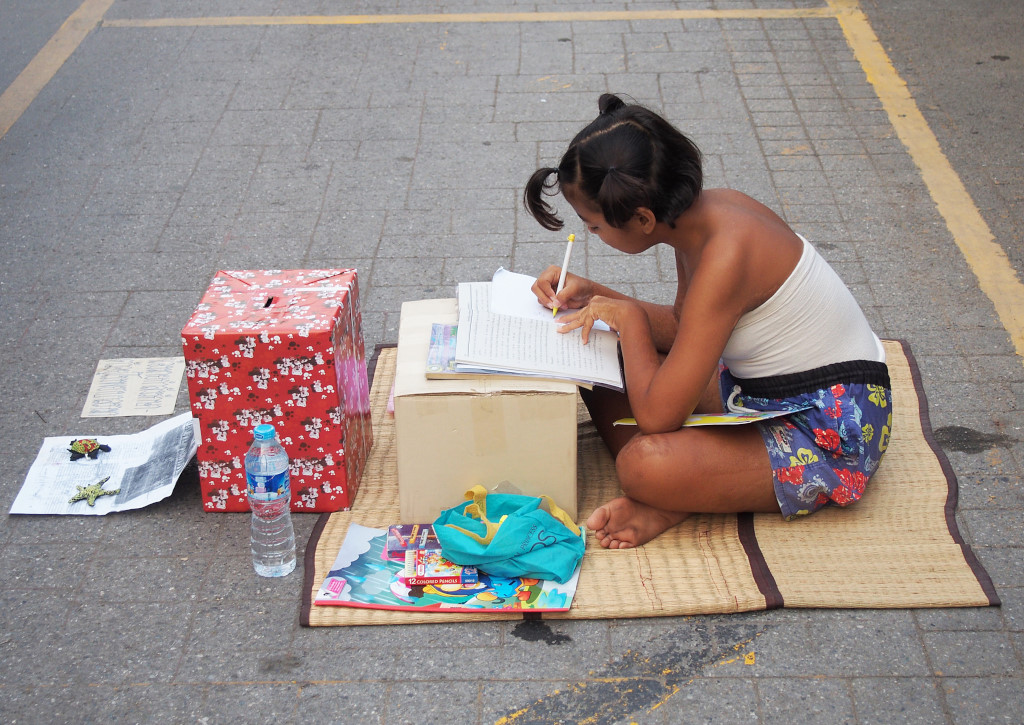 Then that moment arrives that always throws the farang off, amidst the constant announcements and background noise, the Thai royal anthem is played, and everything grinds to a halt, the population obliged to stand at attention until its completion …

There is actually a restaurant area offering sit-down service and reasonable prices. The place I sit down at has good quality food, a satisfying conclusion to the afternoon spent at Chatuchak. However, their competitors shout aggressively at passers by to lure potential customers into their own competing establishments. 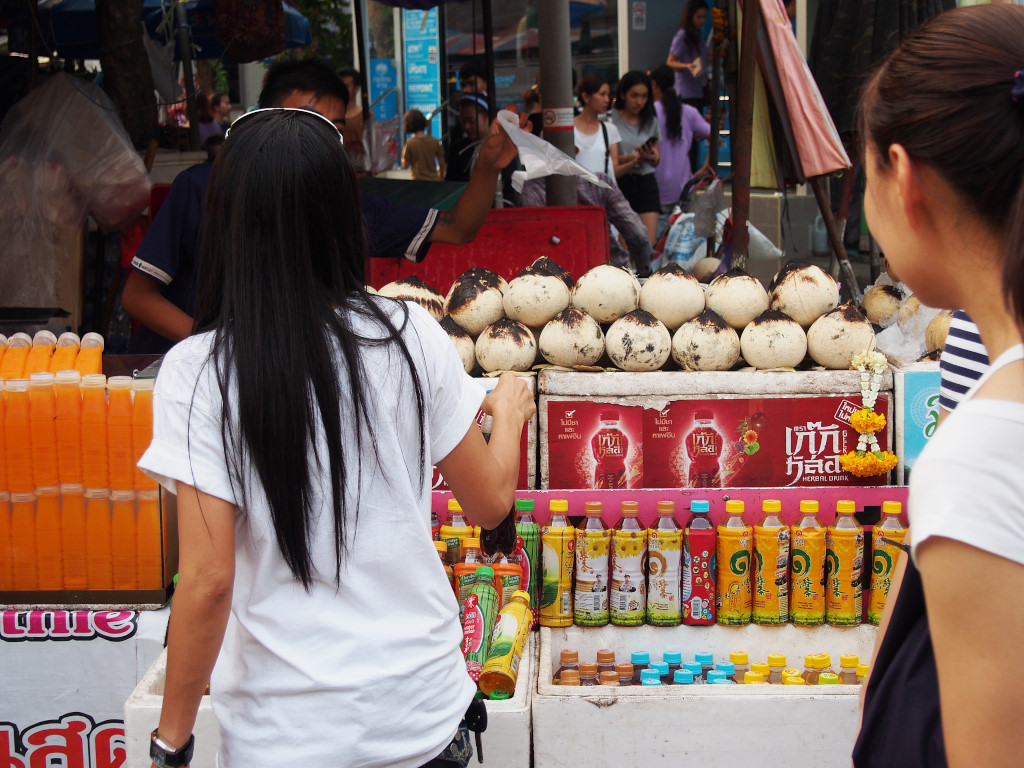 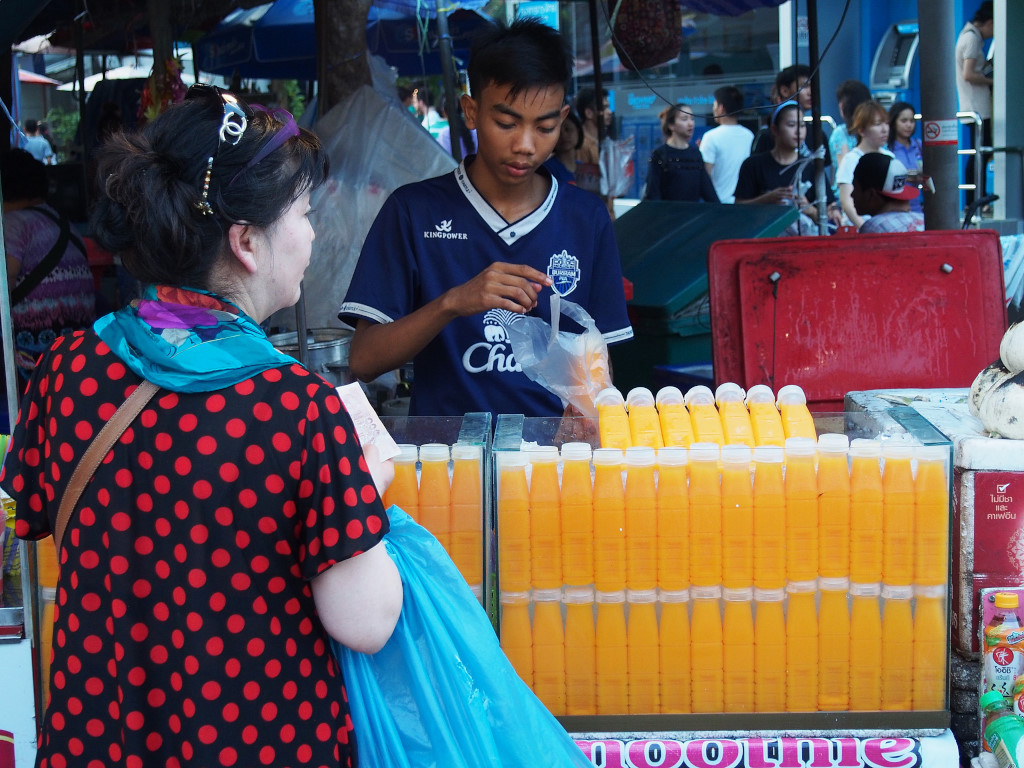