Another modest day, nothing more planned than spending the afternoon wandering along Rama I road and inaugurating my new camera, making snaps of the massive shopping malls along the strip, ranging from Central World and running west towards MBK centre. In theory this is probably the last place I would want to be seen, but somehow the city’s ironies grow on you, and in any case, there isn’t much else left to do in my remaining days of cruising through the city’s modern comforts.

When I walked through the area yesterday, there was something compelling in the play of light over the concrete towers and gargantuan LCD displays, the flagrant paean to consumerism at its most exalted. Below the elevated bed of the colossal BTS track lies a sheltered walkway intended to provide a central conduit connecting the shopping malls lining Rama I as well as the BTS stations. Without this central corridor, transit between the malls would become a lot more complicated, what with the heavy traffic on the artery below. 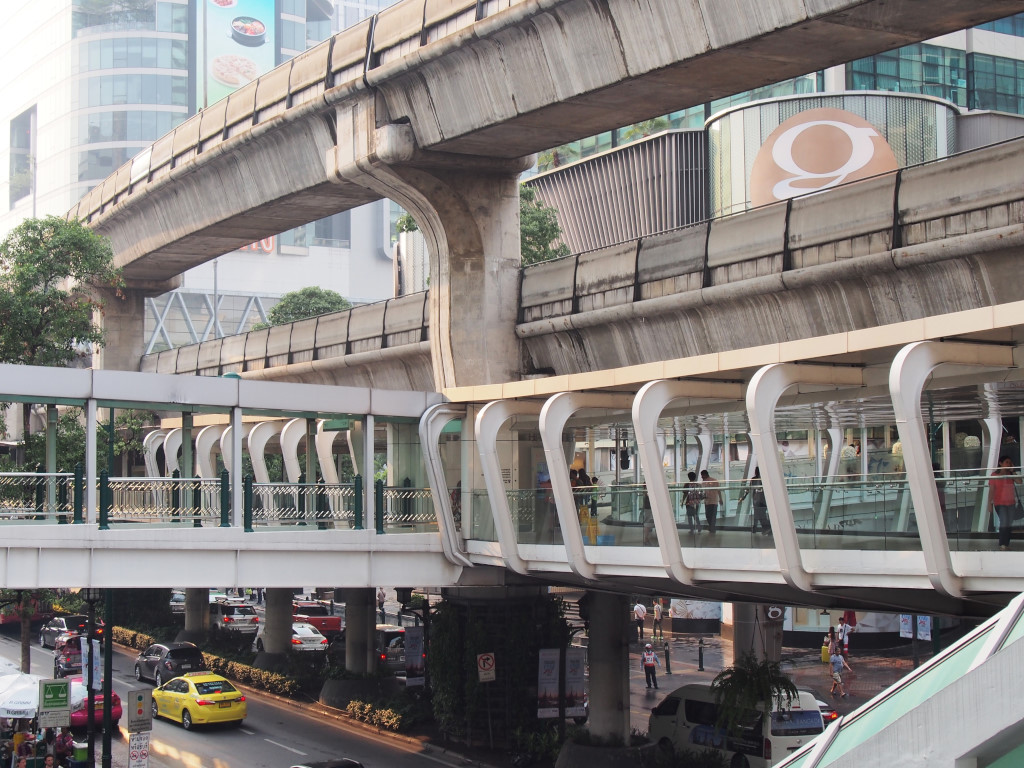 It seems improbable that the amount of retail space could actually attract sufficient crowds, even the smaller malls very large in size, while Siam Centre and Central World are simply gargantuan. Shortly upon my arrival, the momentary trickle of rain falling from the leaden skies erupts into another torrential tropical downpour, sending the people on the road below scattering for cover, or back into the shopping malls, although the crowds of mostly young Thai out for their afternoon tour of the city’s most celebrated retail spaces continue with their relaxed pace, the minority of tourists hovering uneasily with their cameras near the railings, calculating how their day’s plans will be impacted by the flood of water erupting from the skies. 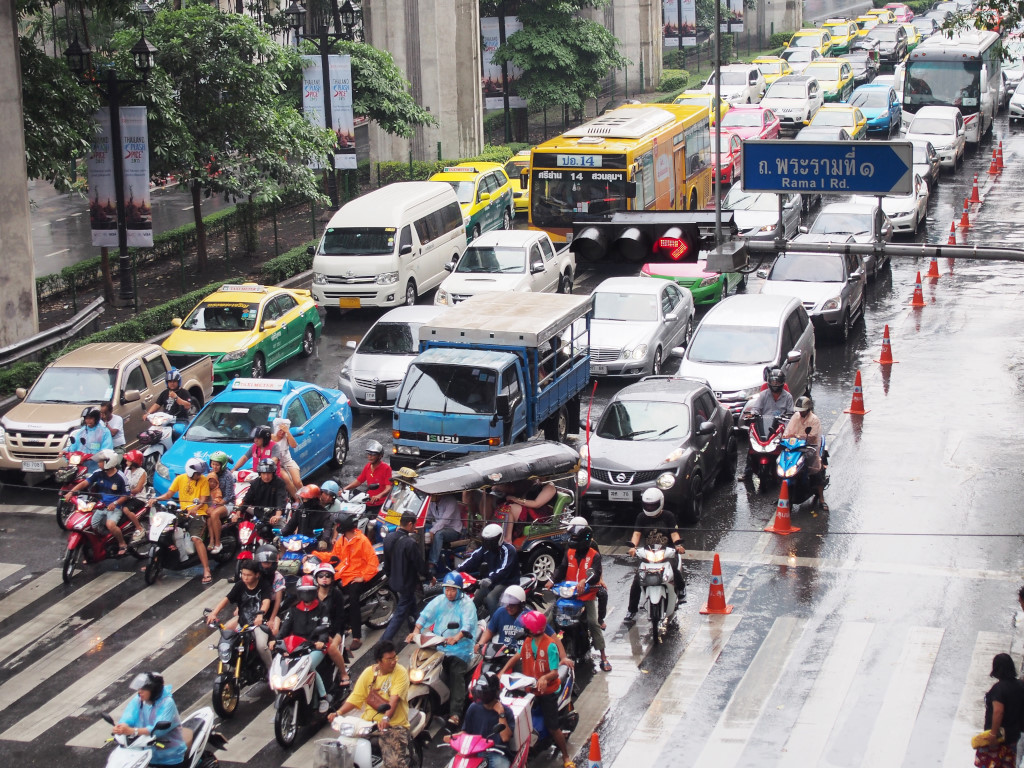 The smaller malls are not that busy, but then the merchandise offered at the Erewan Centre and Amarin Plaza are well out of reach of mere mortals. The Erawan Centre is probably one of the most luxury-oriented malls in Bangkok, not that this kind of subject matter is in such short supply in the city. 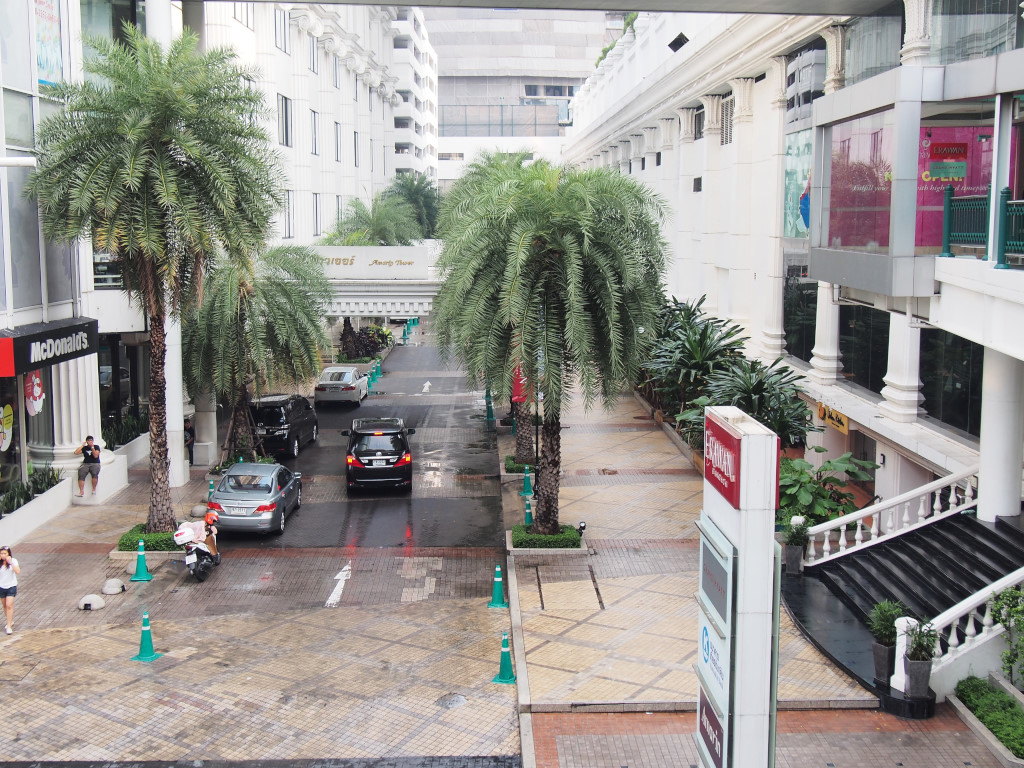 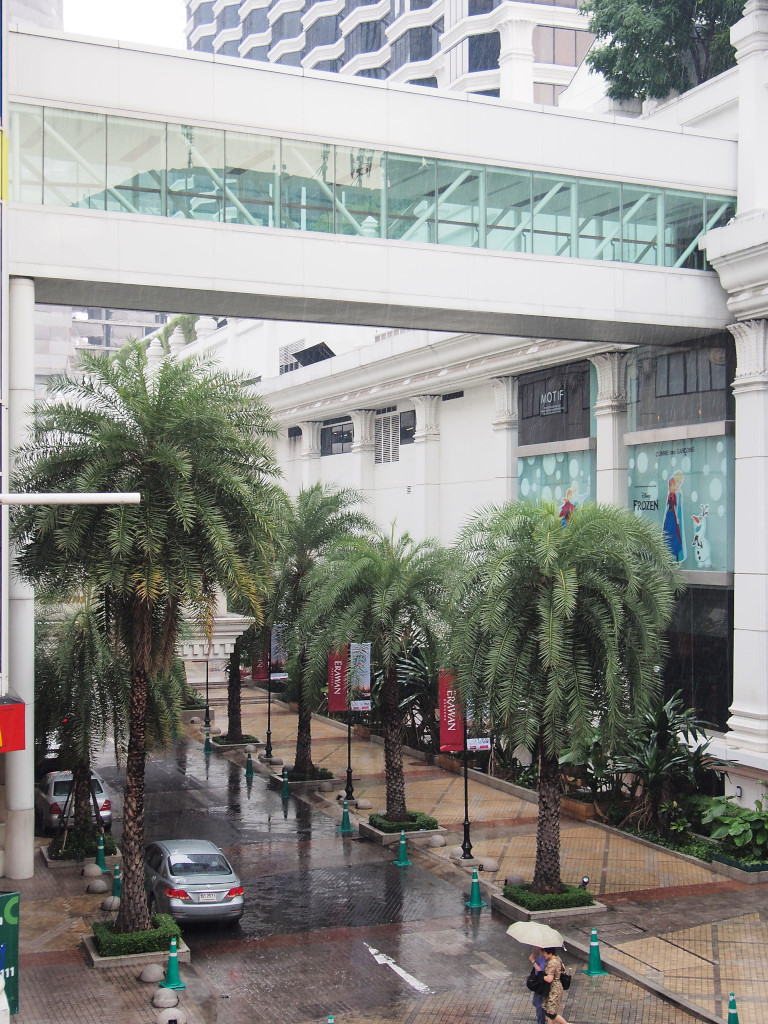 The gleaming hallways are lined with spacious retail icons of glamour, Dior, Lanvin, Armani, Alexander McQueen, Louis Vuitton, Stella McCartney, with several restaurants and cafes that are as posh as they are outlandishly expensive, exclusive shoe manufacturers and the reigning kings of Swiss timepieces, including Tissot, Jaeger-LeCoultre, Rolex, Chopard, Hublot … well, you get the idea – this isn’t the market that local women come to buy mustard greens and lemon grass at. 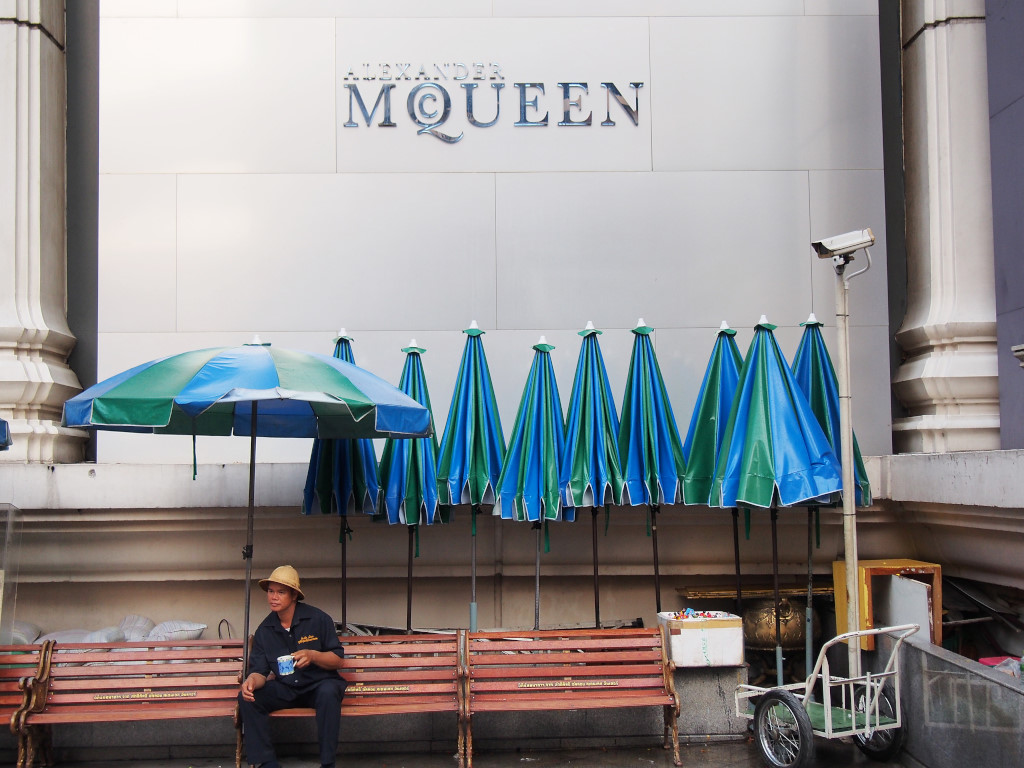 Flanking the mall is the Erawan Hyatt Regency, the predictable enclave of the vaunted privileged, gliding along the serene elegance of the hotel hallways. The sales clerks are understandably very bored, although they couldn’t at any cost afford to appear indifferent, consider the cost of their merchandise.

Tourists from foreign climes are definitely a large target audience for these stores, although I am curious as to why anyone would come to Bangkok to buy luxury goods if they are easily in the income bracket to allow them to travel to the originating countries, where they can enjoy ostensibly better selection and lower prices. But then what do I know about the luxury consumer market! 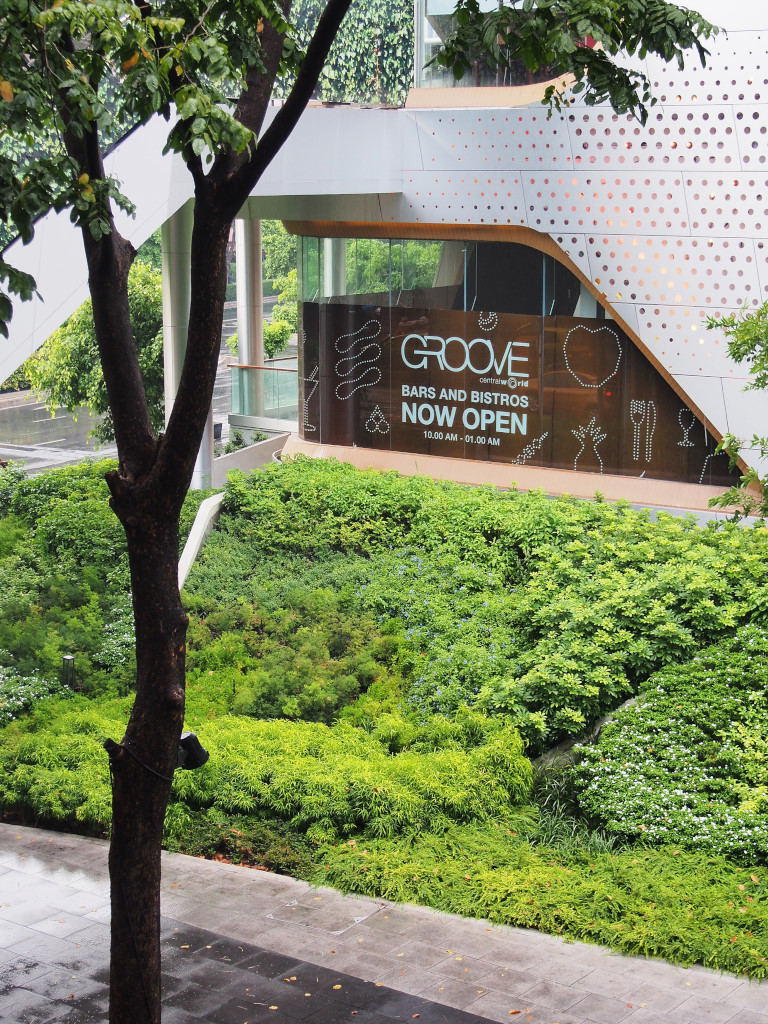 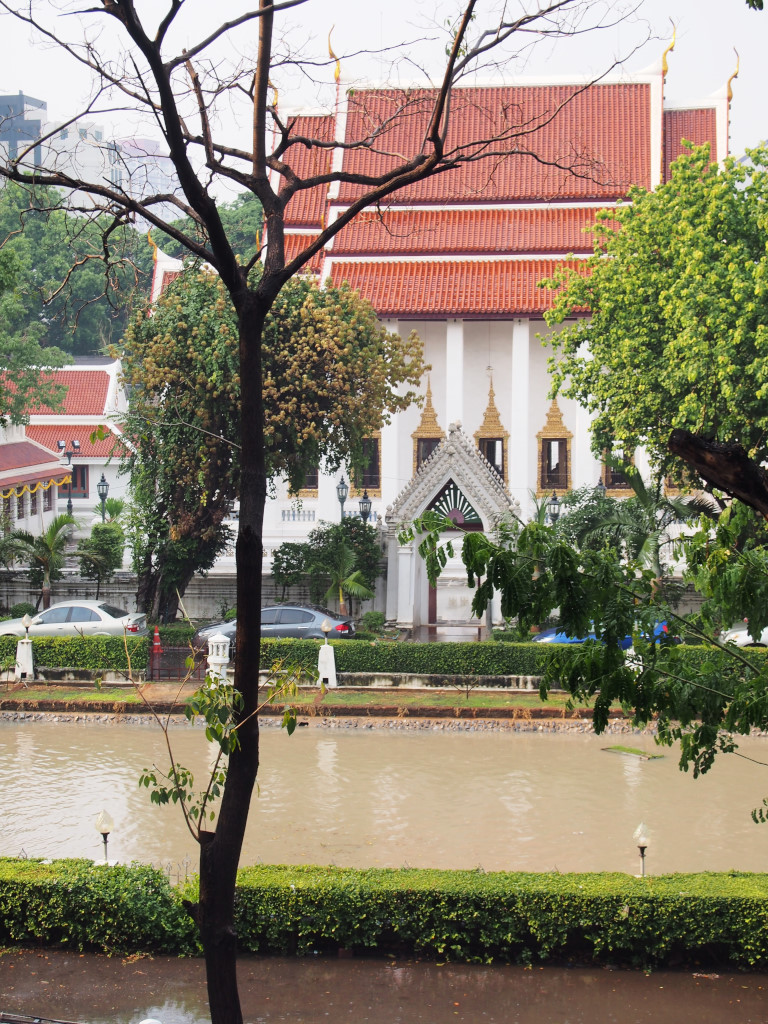 I would be happy to just sit down for a coffee and churn out some postcards, but simply refuse to pay the elevated prices at the mall. I wander through a representative set of the mall’s floors, since I am really here just to kill time, force myself to get some more insight into the city’s blatantly commercial side, and perhaps get some interesting photos of what I see passing me by. But the interiors of malls are problematic, the uniformly sterile presentation of retail space not material for the most inspired photography, unless you want photos that look like they belong in a department store catalogue. In the end the grey, washed out light renders my photos even more problematic.

The Amarin Centre is a slightly different breed, the bulk of retailers local, and even much of the product being offered local. It should come as no surprise, given that the wares of many prestigious clothing brands are manufactured in the area, and so locals should be quite capable of designing and creating their own goods, although with their unique imprint, reflecting the Southeast Asian valuation of heavy fabrics and elaborately colourful floral or geometric patterns incorporated either as embroidery, printing, or woven overlay into the clothing. Imaginative jewellery designers are also housed in the mall, although I am not sure I could justify spending anything on their somewhat awkward designs, irrespective of the desirability of the materials they employ. 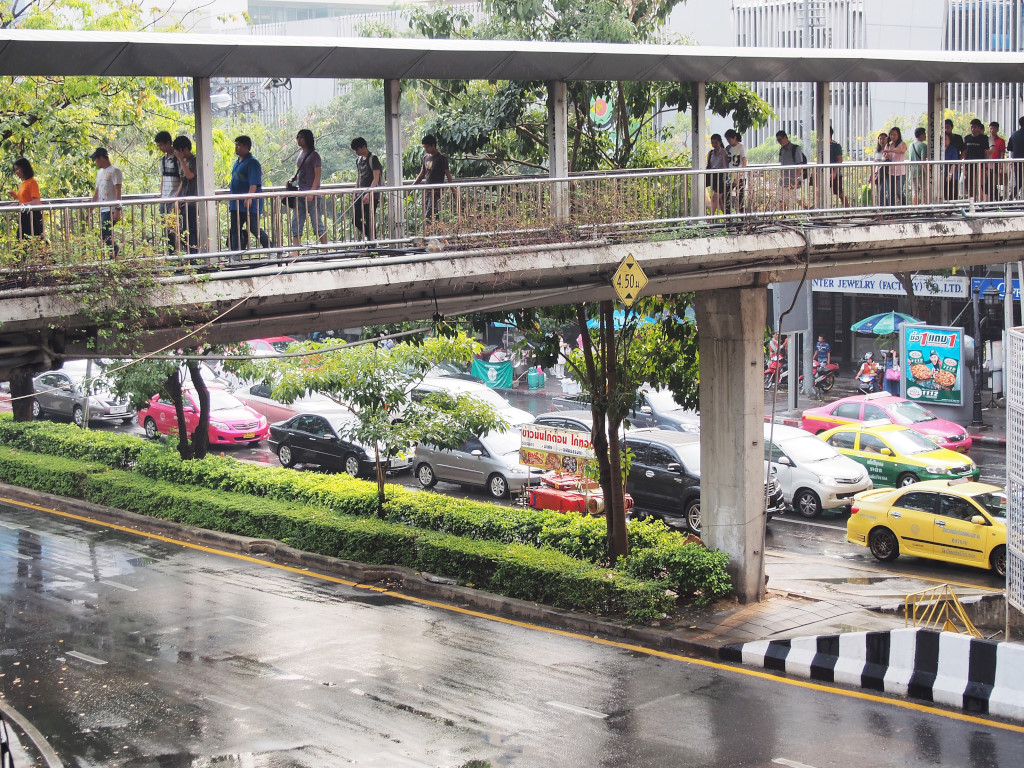 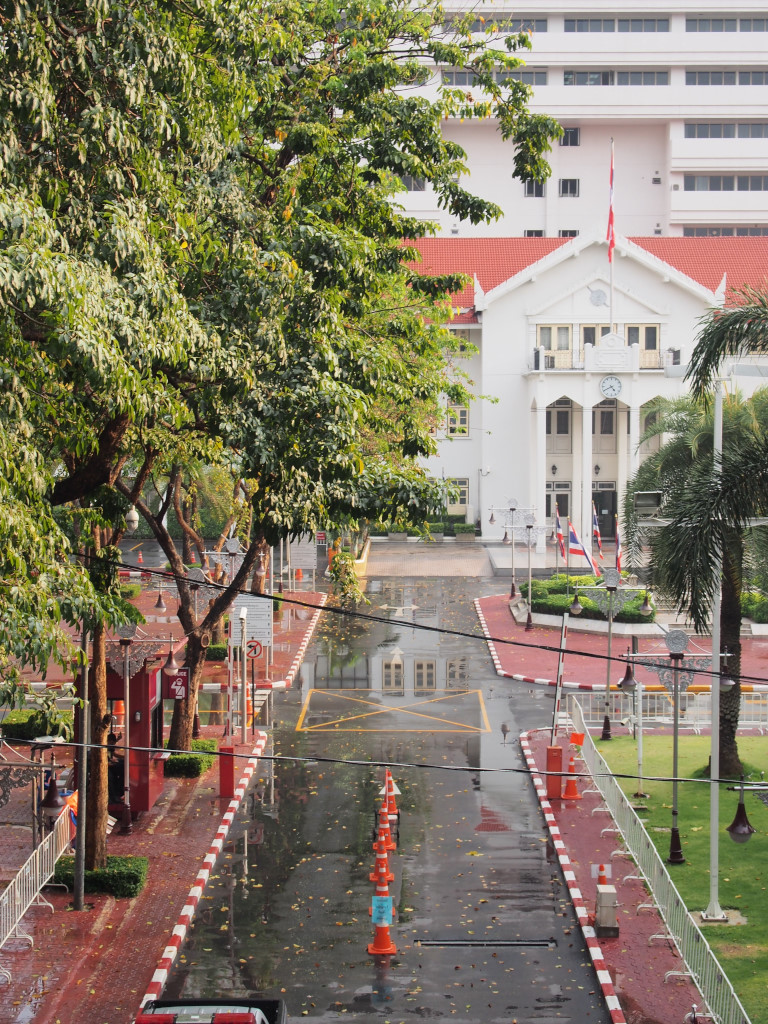 A lone religious shrine breaks the relentless commercial monotony of the surrounding pillars of consumerism, the information posted on the small plaque on the outside wall belying the fervent prostrations of the hordes of devotees, namely that the shrine was placed here to assuage the spirits to compensate for the astrologically inappropriate timing of the construction of the adjoining hotel. Seriously? 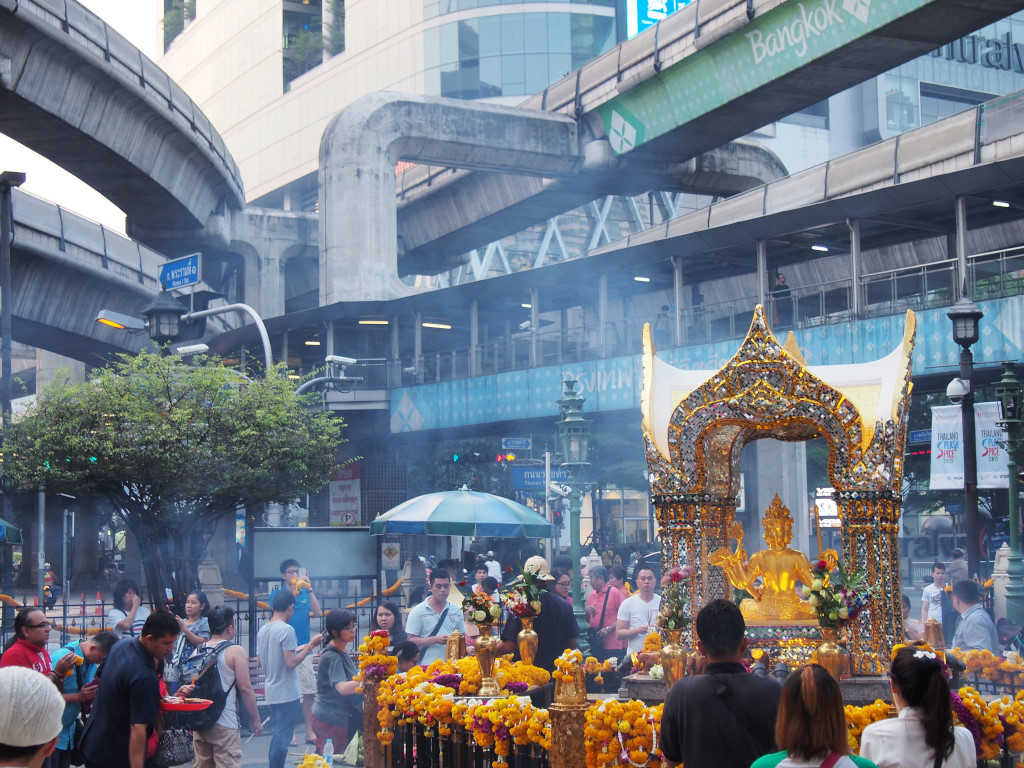 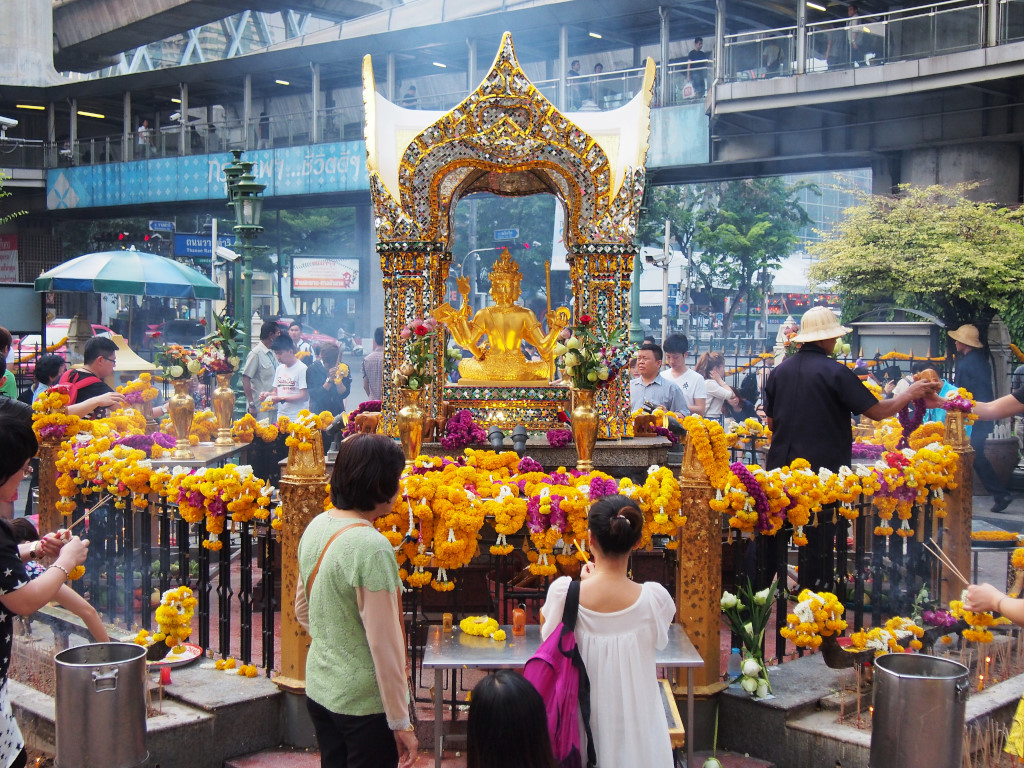 The day concludes with a return to the gargantuan Central World, improbably barely recognizing the shining terrain from my trip several days ago, a retail paradise so expansive and alluring, at least to the initiated. The food court I remember on the seventh floor is nowhere in sight, the entire interior horizon saturated with vistas of luxurious Japanese, Korean, Thai and Pan-Asian restaurants, gastronomic enclaves equally bucolic, synthetic and overpriced. Finally, the food court again, somewhat less ostentatious, less expensive, and featuring far from memorable food, but for all intents and purposes, a suitable conclusion to a day as inconsequential as that of most of my visiting brethren. 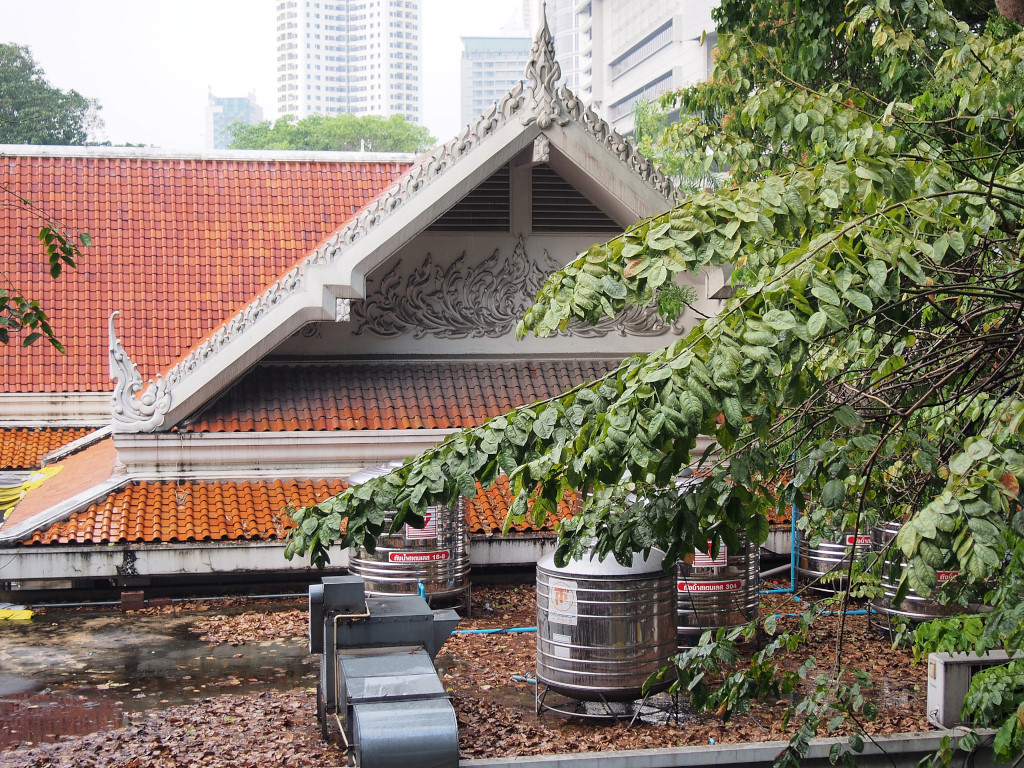 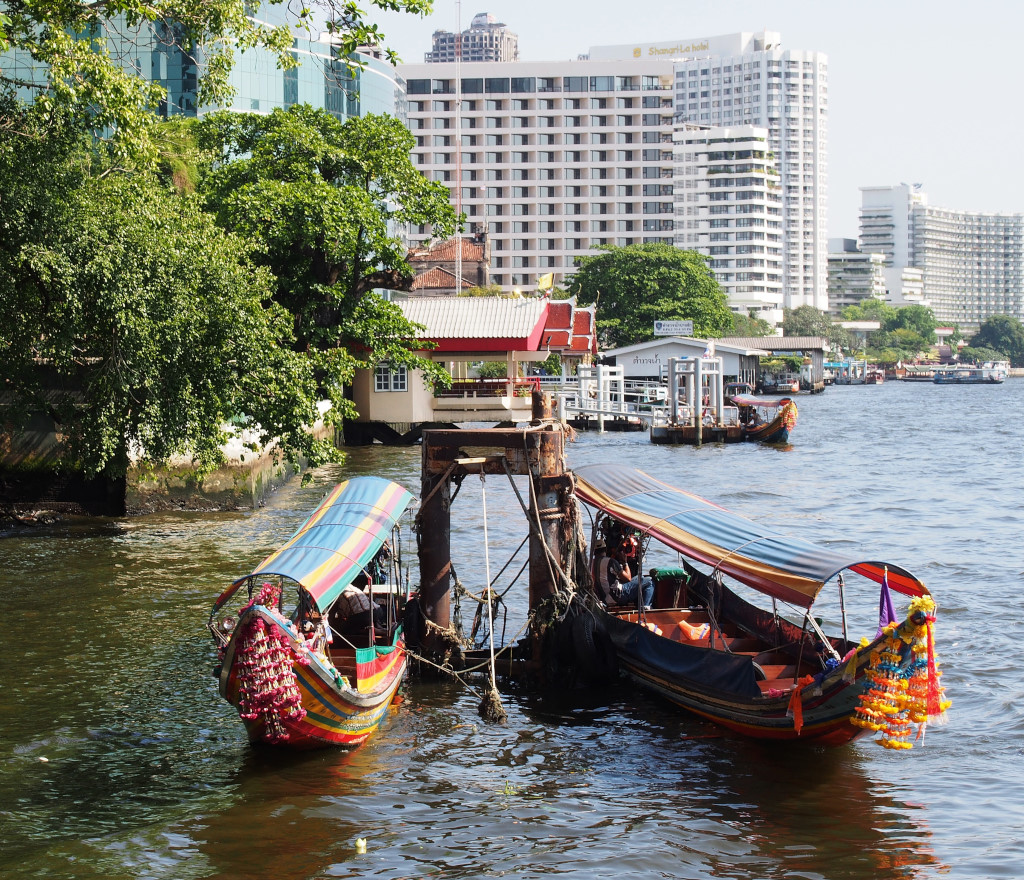 I have decided I should probably leave Thailand at this point, given how things have gone from bad to worse. And since there was still so much left for me to see in Myanmar, I have decided to return to that country, particularly as I can easily procure a visa in Bangkok. So today’s order includes a return to the Myanmar embassy to apply for another tourist visa. 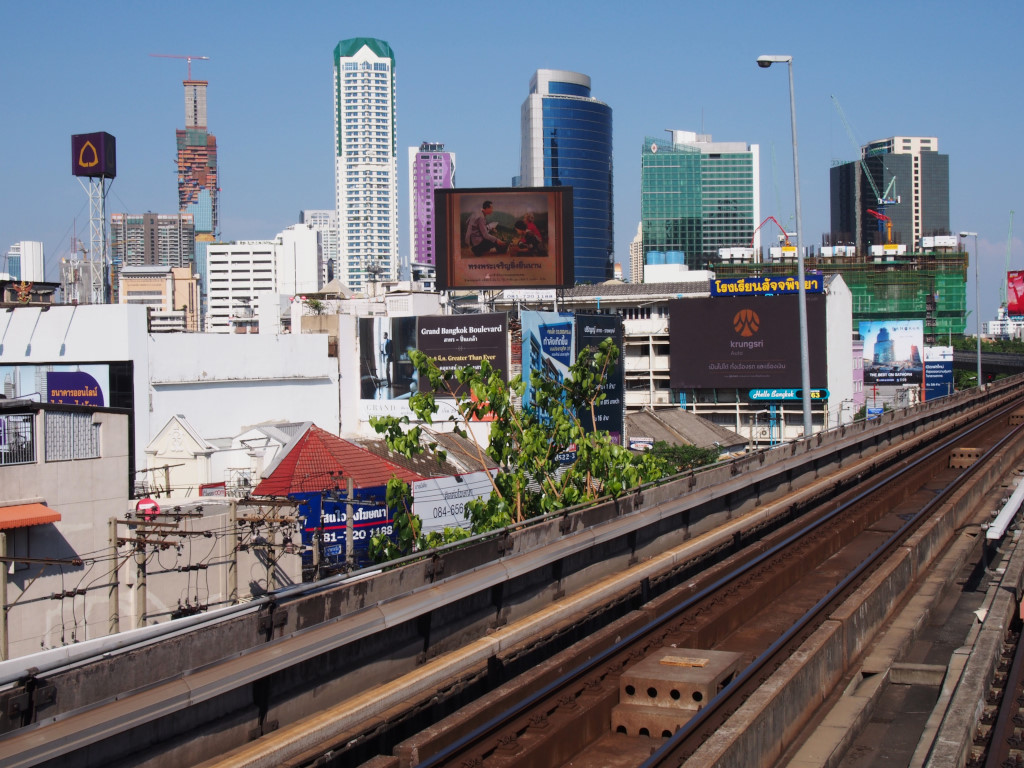 The route to the Myanmar embassy is now familiar, descending from north-central Bangkok in the thankfully well-air conditioned SkyTrain to Silom station, then traipsing along the serpentine overhead walkways looking out over Silom’s commercial fray to Sala Daeng station. I wait patiently for the train to slide into the station against the backdrop of bristling towers, a tapestry of metal and concrete architecture surrounding us as the doors slide open. 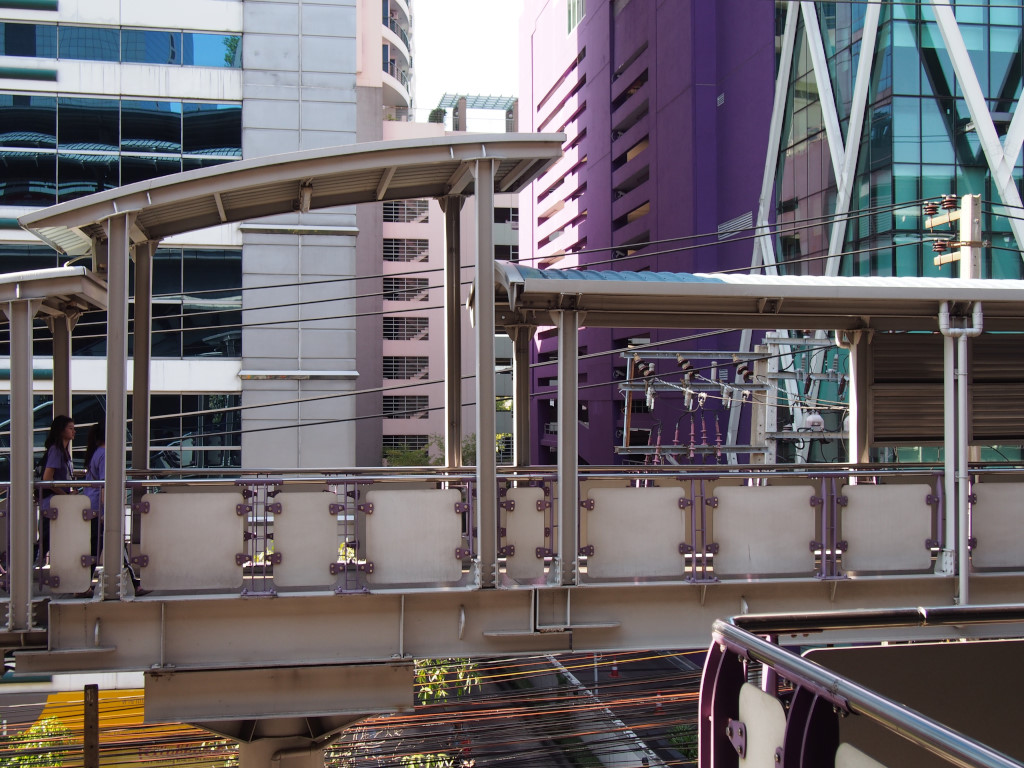 I re-enter the frigid tomblike car, the advertising on the overhead monitors playing in constantly loop. The train glides through its S-shaped curve over Bang Rak to Surasak station, where the usual coffee shack improbably beckons, preparing me for the potentially tedious visit to the embassy.

Fueled by caffeine, I descend the long and steep staircase to the street level, pass the gates of the presumably very privileged private school, and then around the corner to the Myanmar embassy, whose doors are thankfully still open. For a paltry fee, the forms are filled and photos taken, then the wait in line in the stifling heat. Once I have dropped the completed application off at the designated window, I am free to continue with remainder of the day’s journey before returning in the afternoon to pick up my passport and newly-minted Myanmar visa. 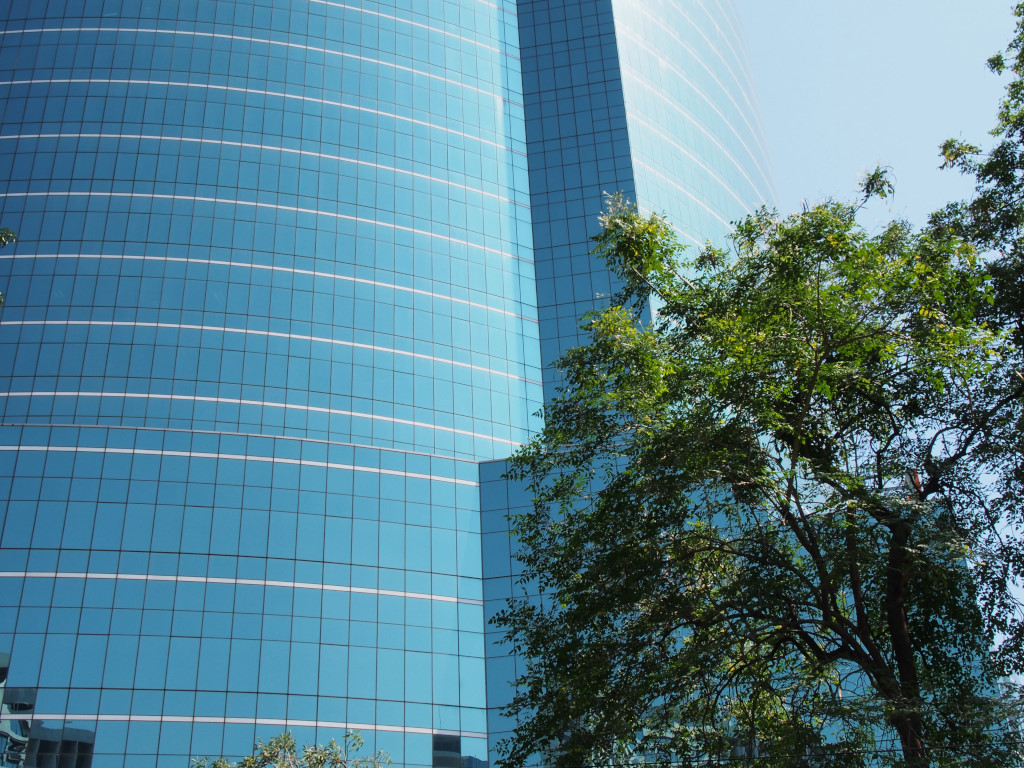 The nearby Riverside area beckons, allowing me to revisit intimate haunts bordered by Saphan Taksin to the south, Chinatown to the north, the Chao Phraya to the west, and Charoen Krung road to the east. All manner of intriguing establishments lurk in this area, one of the city’s few redeeming neighborhoods. 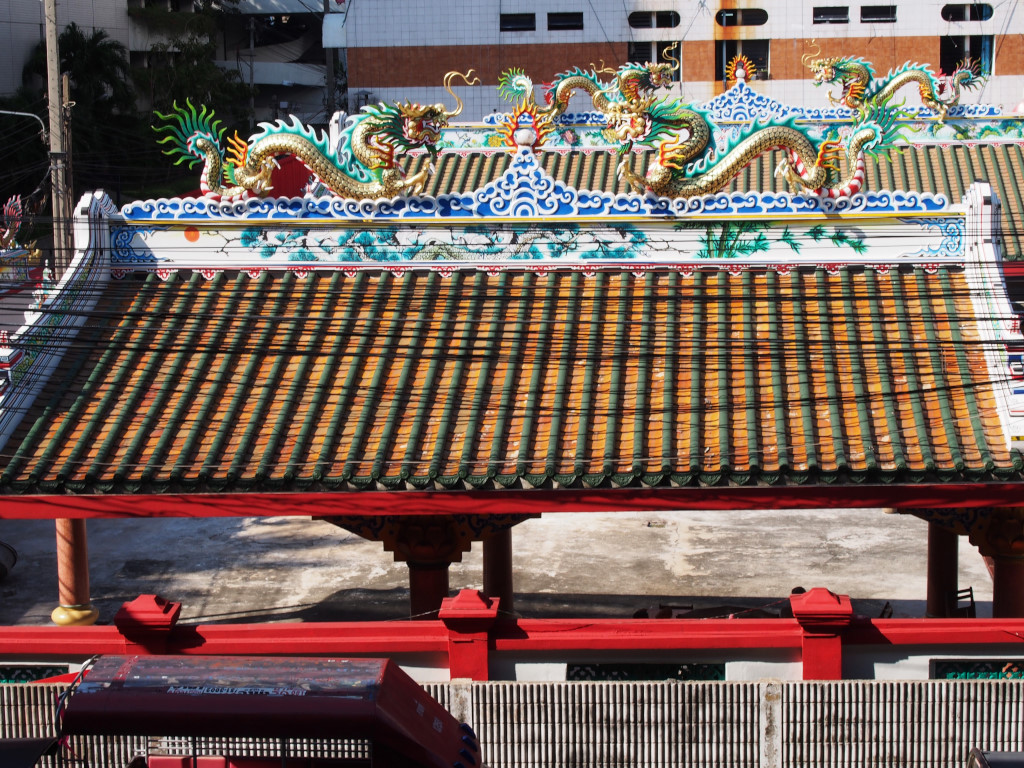 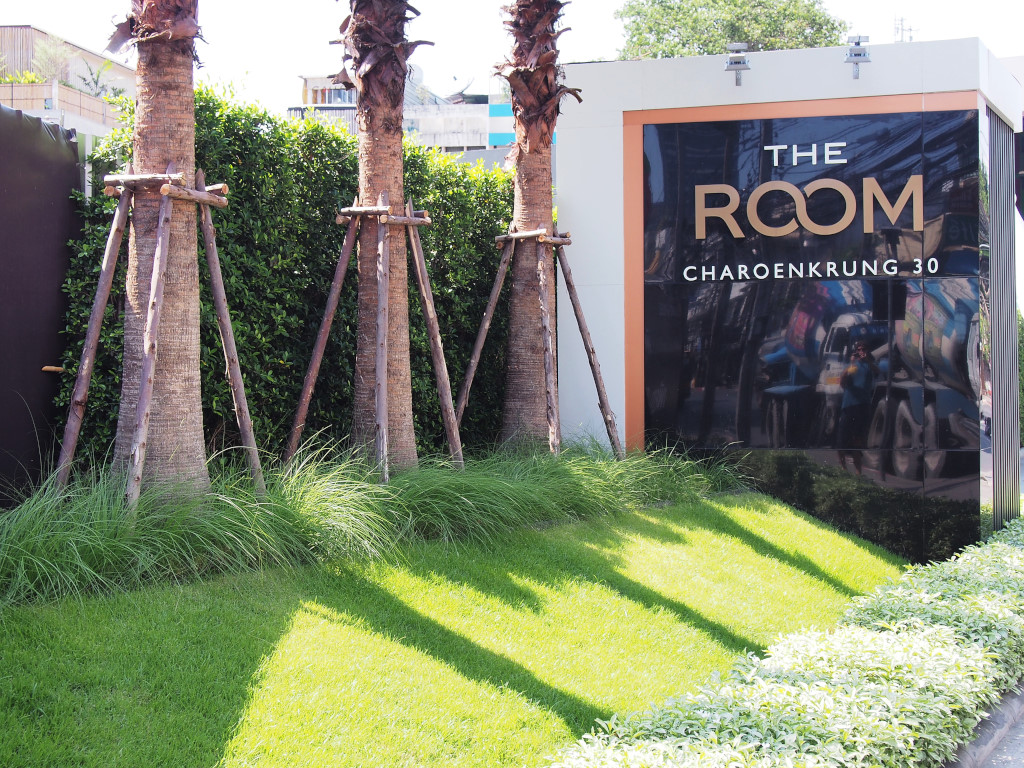 On the river, a vista of concrete towers threading along the river’s banks opens up in either direction. A procession of gaudily designed tourist boats intended to evoke traditions of yore meanders along the river, interspersed by the occasional modern barges laden with merchandise. 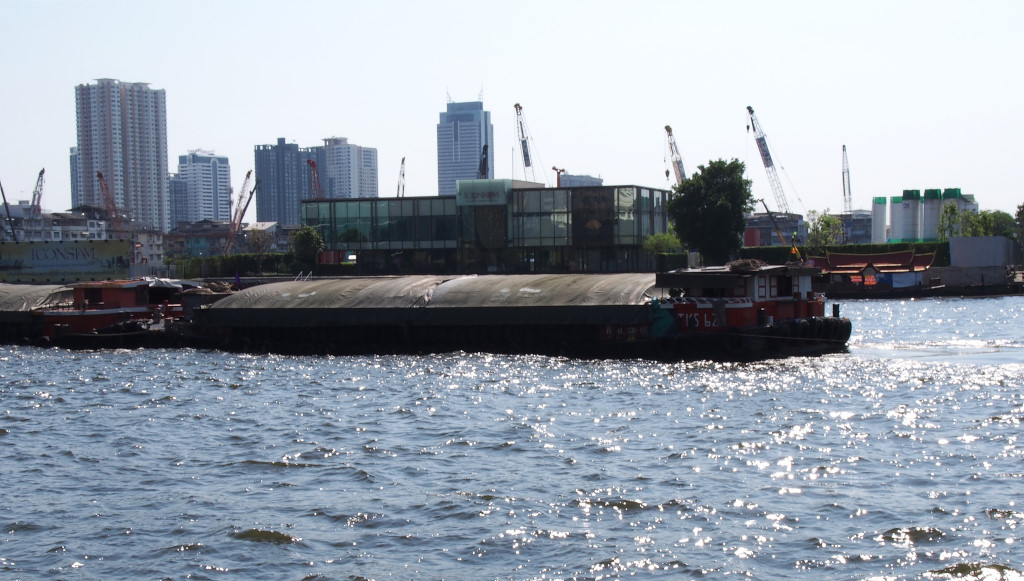 The passenger docks thankfully feature instructive signage that should allow even the most spatially or culturally challenged visitor a clear view into navigating the river by means of the regularly scheduled river boats that serve as public transit on the Chao Phraya. 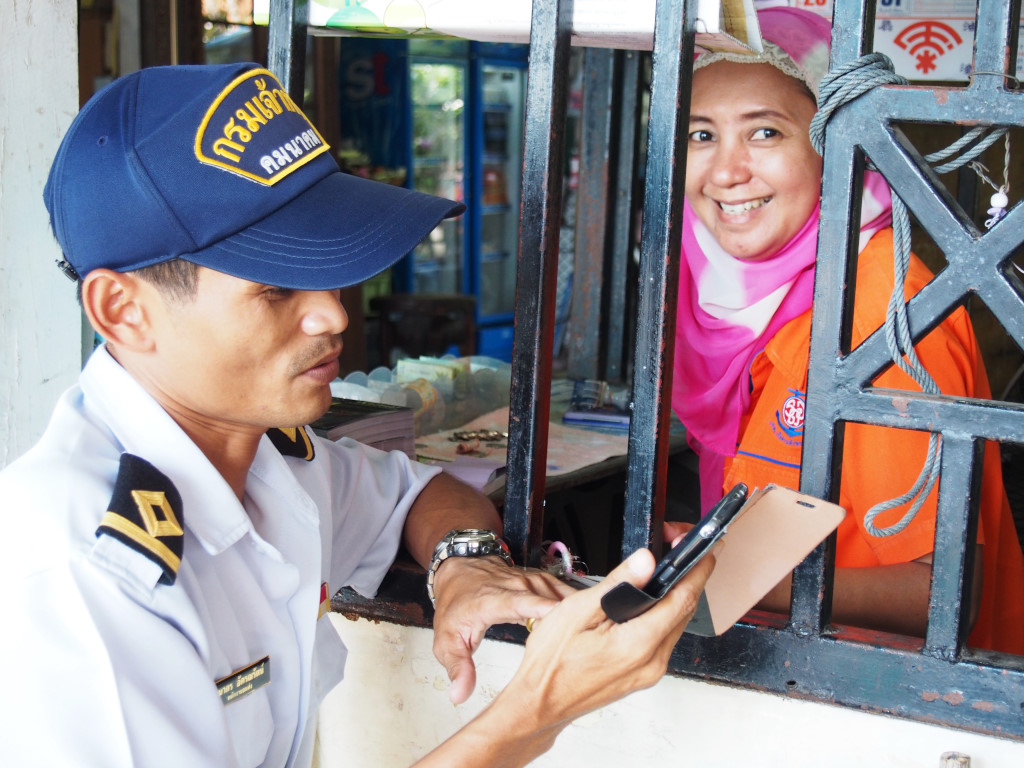 I make an initial stop at a trendy coffee shop with generous lighting, the establishment arrayed with sleek bric-a-bric on the shelves lining the whitewashed walls. Polka dotted tatami mats and blond modernist stools run the length of the café, the modest goods arrayed on the shelves a paean to Scandinavian design. 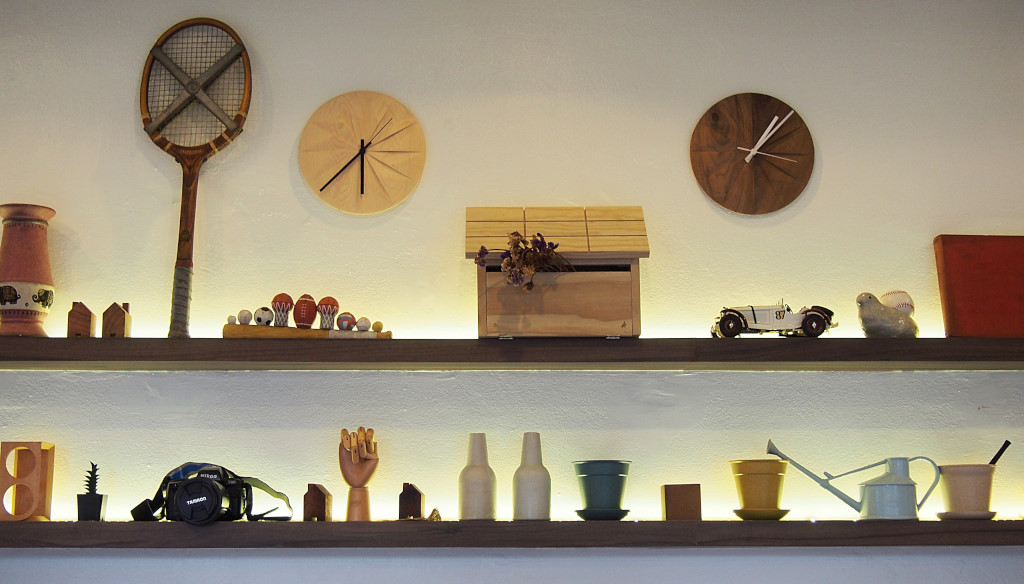 I meet a couple with whom I immerse myself in a discussion about the vagaries of traveling. I speak mostly with the woman, while he says very little, although his eyes are attentive. She tells me she loved India, even though it is replete with difficulties. Thailand simply does not reflect the level of challenge and engagement that keeps her interest up in traveling. India has so many layers, whereas Thailand is just overdeveloped, contrived, lacking in depth, and engagement. Traveling is about learning and growing, rather than just seeing exotic places, and opens you up to your own possibilities.

In Europe she loved Rome as a city, its diversity, history, its design, chaos, warmth, topography and physical aspect, and its seemingly endless sense of discovery. And just as was the case for myself, she was also underwhelmed by Florence, finding it too predictable, plain, overwhelmed by tourists, and ultimately uninteresting and bland. 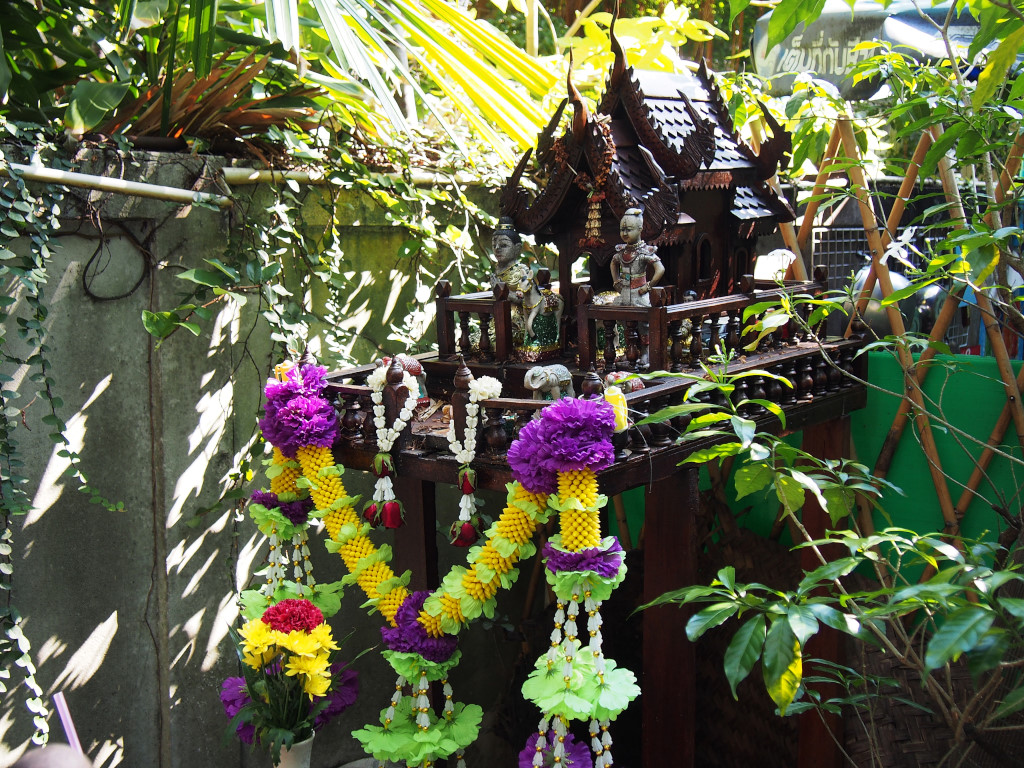 Here sense of discovery of the world emerged from a younger life detached from her social setting. She felt her group of friends was utterly sham and uninteresting when she was in school, but it perhaps it takes self-discovery to allow ourselves to attract those who are more interesting – but also make us in turn more interesting. 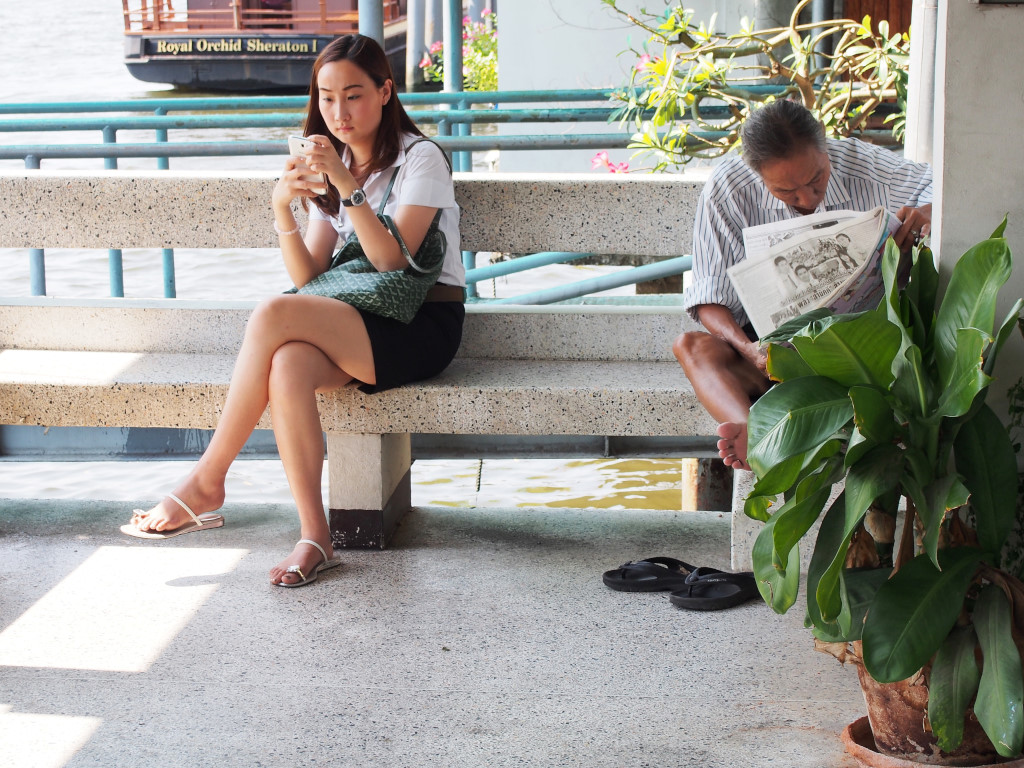 Vigilant of the time, I am sure to not venture too far to the north, knowing that I have to return to the Myanmar embassy to recuperate my passport – with the new visa, which will allow me to cut my stay in Thailand short – and hopefully not come back, at least for some time to come. 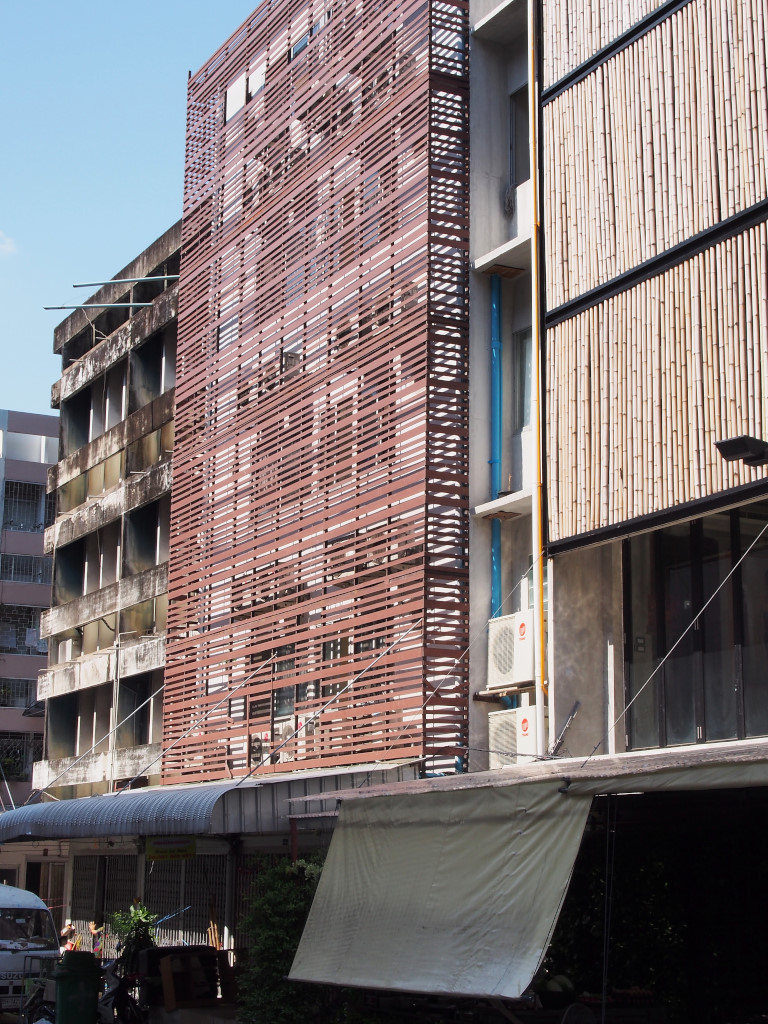