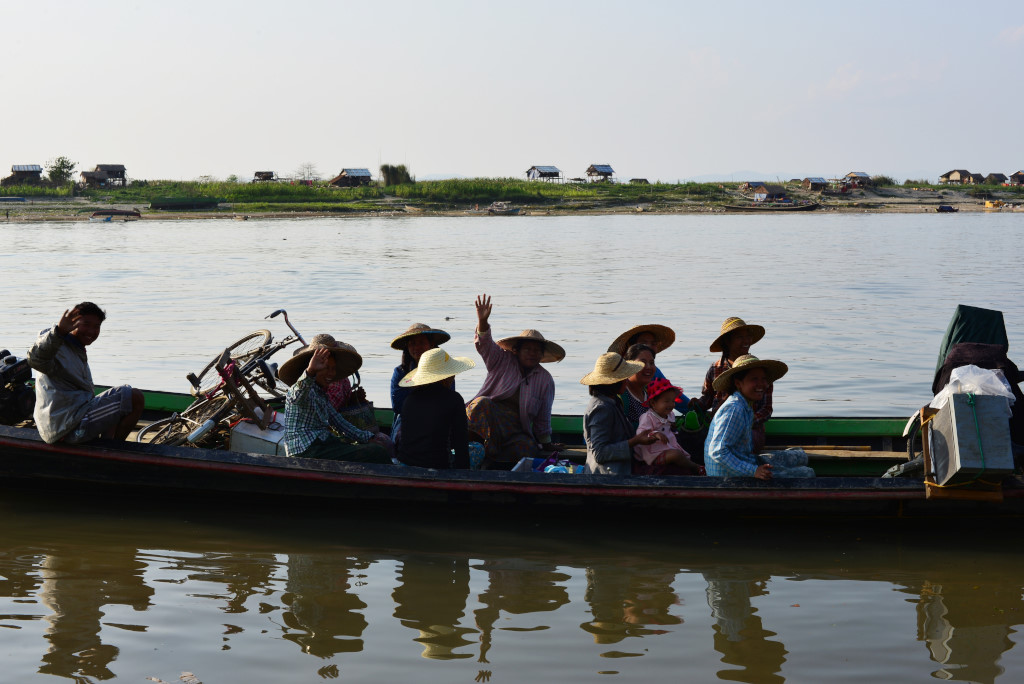 One last treat in town, another round of coffee at Pizza Korner, not that anyone really cares, least of all the underage workers who are here every day from morning to night time, and probably working for a pittance. 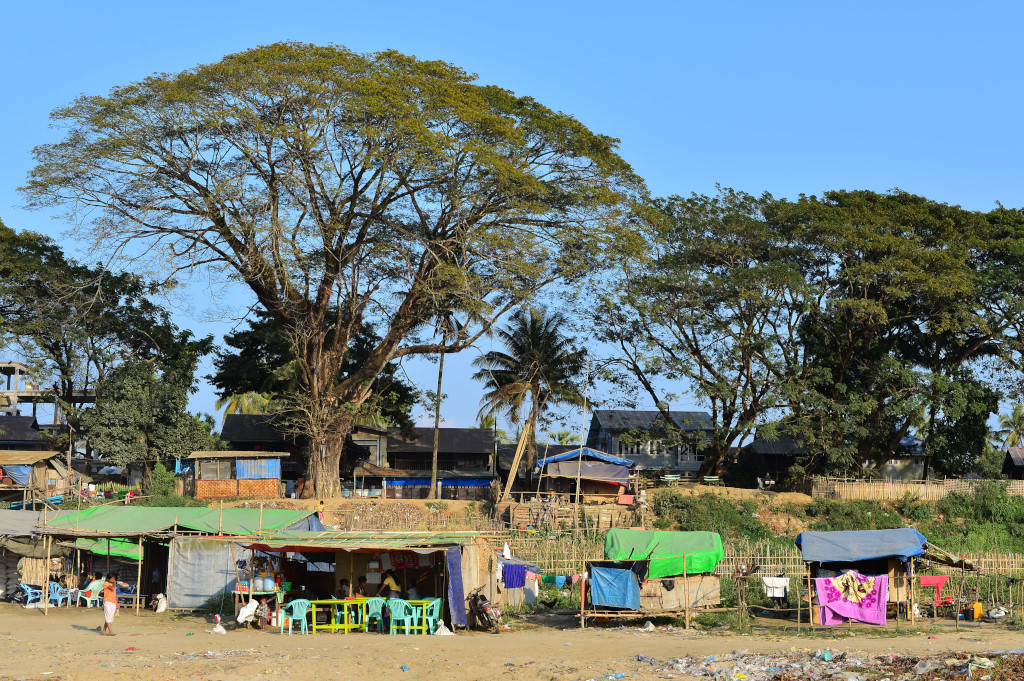 The local transport truck takes me to the airport for 3,000 kyat, passing by extensive and relatively mediocre residential areas, not to mention very large military compounds. I am summarily thrust into the minor labyrinth of Myanmar officialdom, the uniformed immigration officials checking everyone’s move, my passport and visa information yet again laboriously recorded, followed by several utterly useless security checks. After the experience of arriving at the empty Mandalay airport, a scene right of Orwell, the small Myitkyina airport comes as a shock. 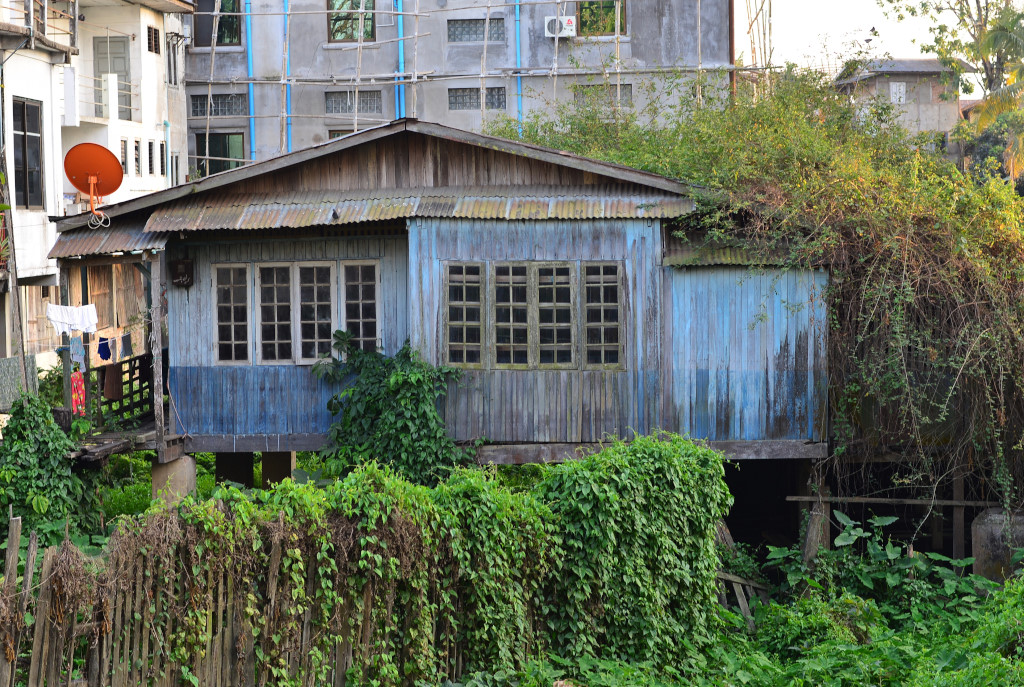 The waiting room is packed with people waiting for a series of flights, one plane after the other landing, passengers disembarking, agent flinging open the doors to the waiting room and quickly shouting something, an assortment of passengers scurrying out onto the tarmac and the door being summarily shut again. All I recognize is the airline name, hoping that I heard ‘Yangon Airways’ and ‘Golden Myanmar’ correctly, since my flight to Bhamo is with ‘Myanmar Airways’, the official airline of the country (they make a point to telling you often enough). It seems all the airlines stock small airport connections such as Myitkyina with midsize propeller jets, about 30 rows and 4 seats wide, a nice size, flying low and slowly enough to be fairly stable and smooth – well, at this time of year, anyway. 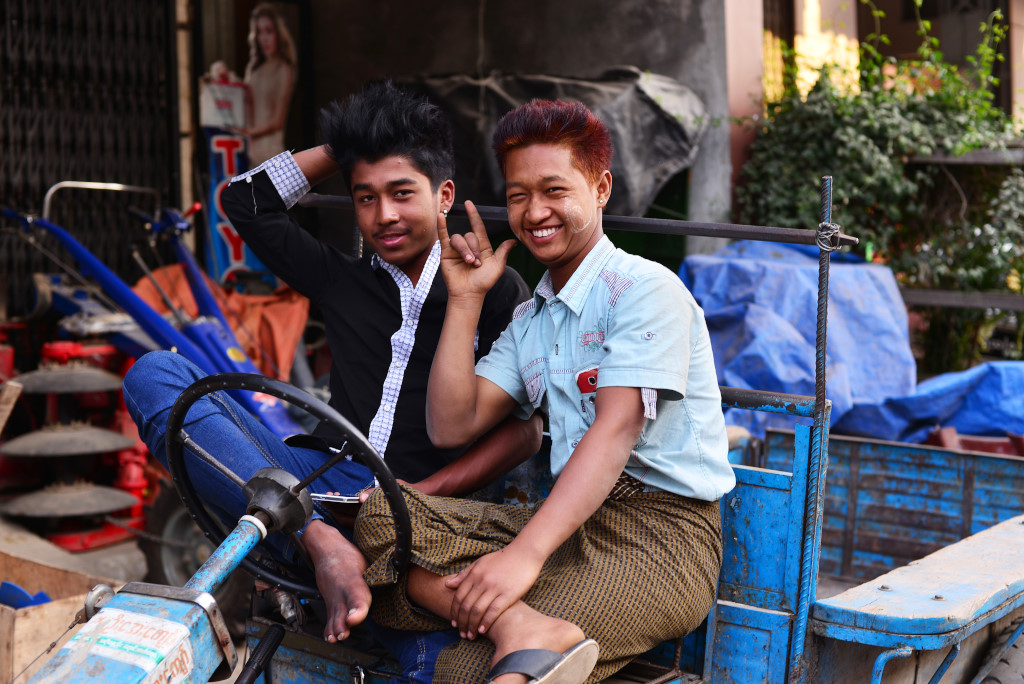 The flight to Bhamo continues on further south, and at least this segment is virtually empty, a large number of the passengers military. I am quite surprised at the landscape that unfolds before me. Beyond the extra-urban and agricultural sprawl south of Myitkyina, almost the entire terrain below us is thick forest, the relatively flat landscape rising up to low mountains running along a north-south axis, embracing the Irrawaddy arcing to the west of us, then looping all the way eastwards toward Bhamo, which is set on a minor tributary of the river. As much a paradise as this sylvan environment may come across as from the air, on the ground it may be home to some serious conflict.

Bhamo airport seems like a scene out of Alice in Wonderland, with its overgrown garden, the surreal touch of uniformed immigration officials standing every 10 feet along the path leading to the tiny airport terminal building in an otherwise deserted landscape, the classic Myanmar scenario of all the officials attempting to be extremely stern and yet one of their uniformed men is lying behind a tree, fast asleep. Just as the men are trying to move me in as formal manner as possible directly into the terminal building, I stop and point to the man on the ground, saying ‘Myanmar Immigration?’, at which the one closest to me bursts out laughing, and then they relax, giving up the charade.

All they really need to do is record the passport and visa information but they are essentially confused as to what they should be doing. I guide them from heading to heading in their ledger, pointing them to the relevant information in the passport. Of the few people on the plane most have disappeared, one larger party taking one of the red truck taxis, and myself and another younger woman heading to the hospital, as she is a doctor.

The Friendship Hotel the Lonely Planet raves about looks very impressive from the outside, but in the lobby is essentially a typical institutional Chinese hotel. As good as the hotel may be, simple rooms with bathrooms are $25, which is way above my travel budget, although I did spend that amount in Myitkyina. According to the guide book there is another option, the Paradise Hotel, several blocks away, with far cheaper simple rooms, with all the amenities – so why not give that place a try? 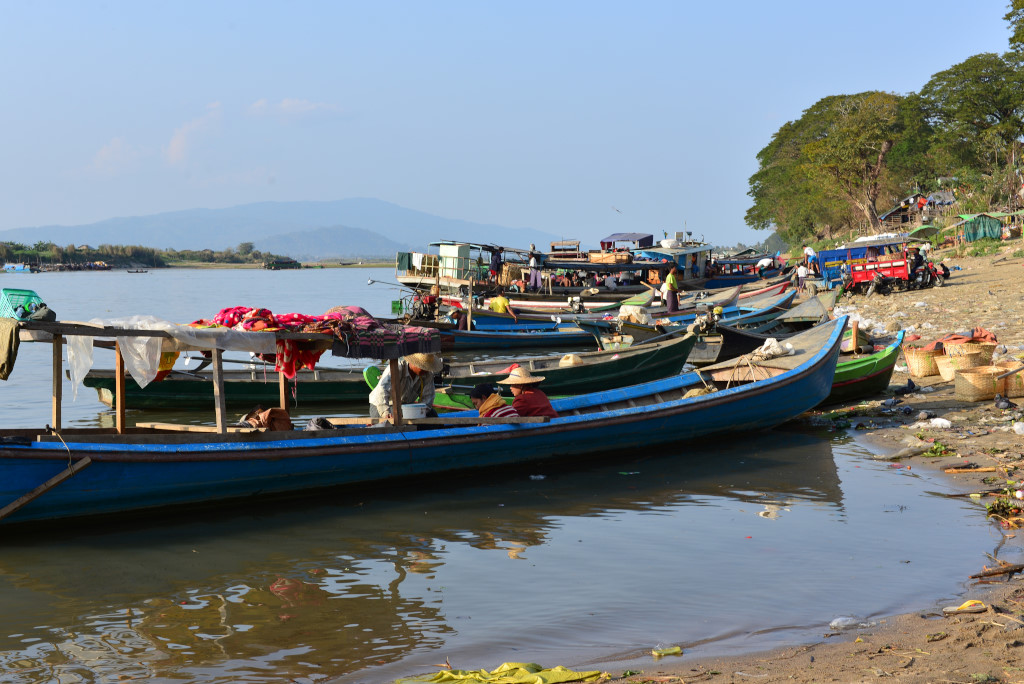 Striding with my heavy packs in the direction of the Paradise hotel, I have the feeling this town won’t do a lot to impress, both a lot smaller, and also with a more run-down feeling. The Paradise hotel is smaller than the Friendship, but very proper and clean, the staff extremely friendly and professional, the older Shan receptionist speaking impeccable English, as she was educated in a Catholic seminary school.

I have a torrent of ill-formed questions for the woman regarding taking the boats downriver, which I feel compelled to do, but also dreading the prospective experience. I am a creature of comfort, and don’t really want to spend days stuck on a boat with no ability to go anywhere, not being able to abandon my things and walk around, with no sane facility to clean up or go to the toilet. An overarching problem with these boats seems to be that it is not at all clear when the boats pass by, as they could digress from their official Tuesday and Wednesday departure dates by several days. Does that mean I would be throwing valuable days from my limited visa away, sitting on a riverbank, waiting for the boat to arrive? 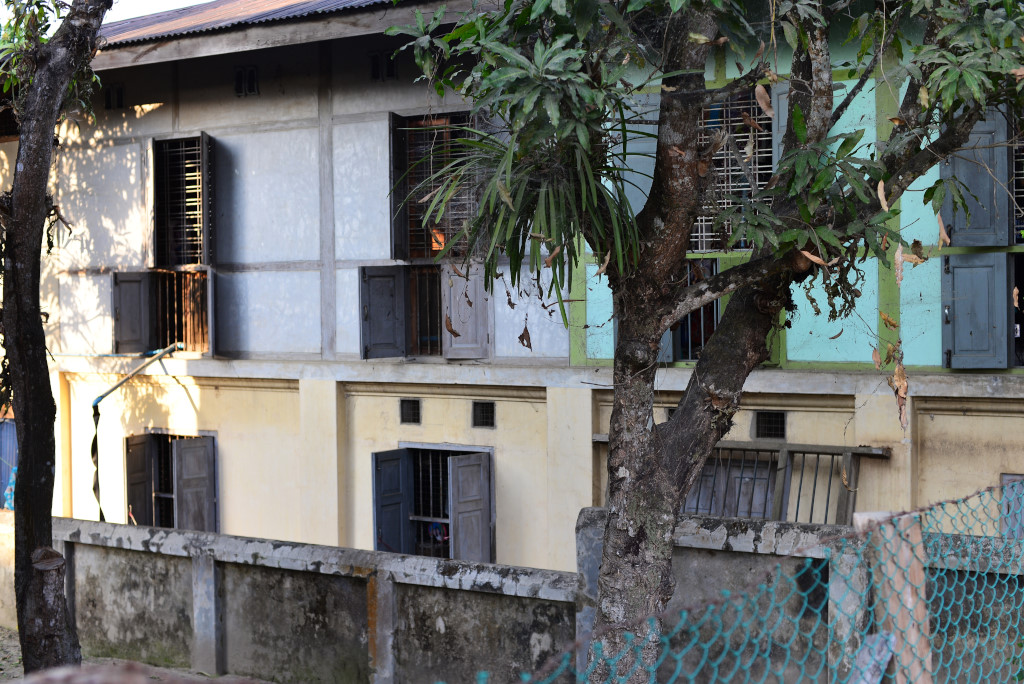 The hotel is very clean, the room small but with a high ceiling, functional air conditioning, tepid wifi, fairly universal in the country, a mid-sized bathroom, all spotless, and the bed erected in the corner so as to give more of a feeling of space. At $15 it is a good price and just what I need, compact but not in any way feeling cheap and decrepit the way some budget rooms invariably are. And then very coincidentally, the number of my last room is 308 …

A somewhat ridiculous situation unfolds in the lobby when a young man who is part of some sort of group of hipsters staying at the hotel tries getting into a conversation with me, our conversation immediately running aground from my lack of Burmese and his lack of English. When I turn to the receptionist for help, he stands back and starts taking photos of me, compelling me to make some crazed distorted faces – not that I don’t spend a lot of my own time taking impromptu photos of people myself. 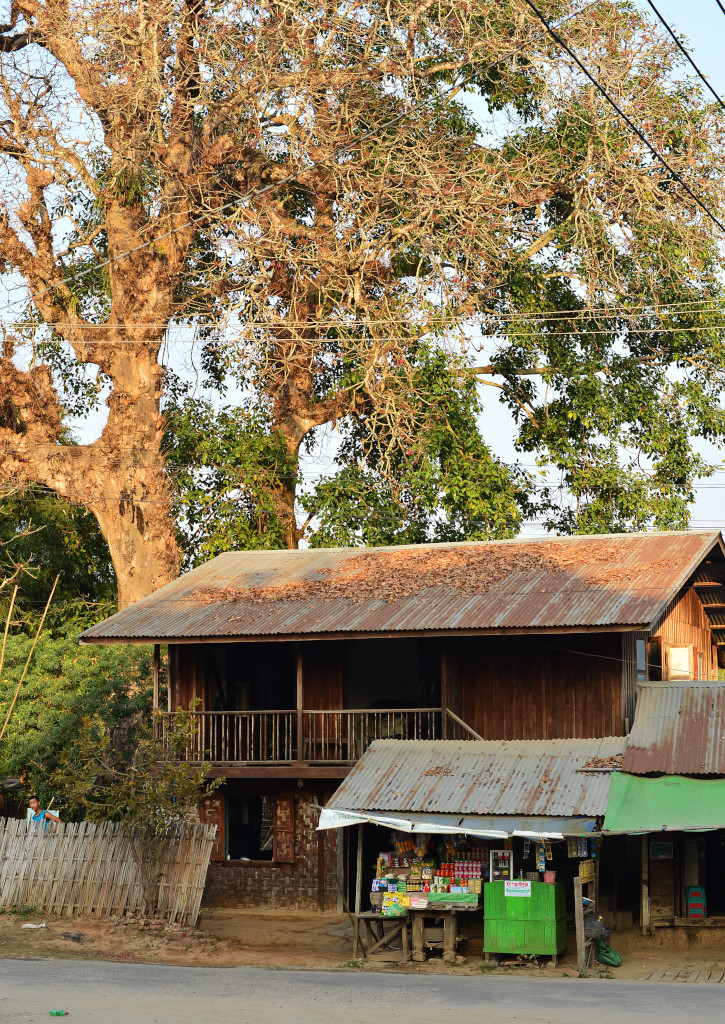 Men I usually shoot without asking, but in the case of women young and old invariably pointing the camera first and looking quizzically – if the body language is positive, I take some photos, otherwise I drop the camera immediately and move on. And no, shoving a camera in monks’ faces is not OK … It occurs to me that the hotel has another very important raison d’etre – it apparently has a decent restaurant, with quality coffees that will help spark me up, although today the cafe is closed for Chinese New Years.

The dilapidated streetscape of Bhamo offers a very different impression than the hotel I am staying at, with very little that feels posh or classy in any way shape or form. My first stop is the harbour front, the myriad of weatherworn longboats crammed onto the long sandy banks of the Irrawaddy tributary, much of the terrain a veritable garbage dump, trucks lined up along the shore next to the boats, wooden ramps leading from the boats to the trucks, bedraggled, emaciated young Burmese hauling sacks probably weighing as much as their small frames do onto the trucks, who knows for how many hours a day, and for what pittance of a salary. The scene before me certainly provides a far more accurate portrayal of the grueling hardships rural Burmese face than what I have seen here so far. 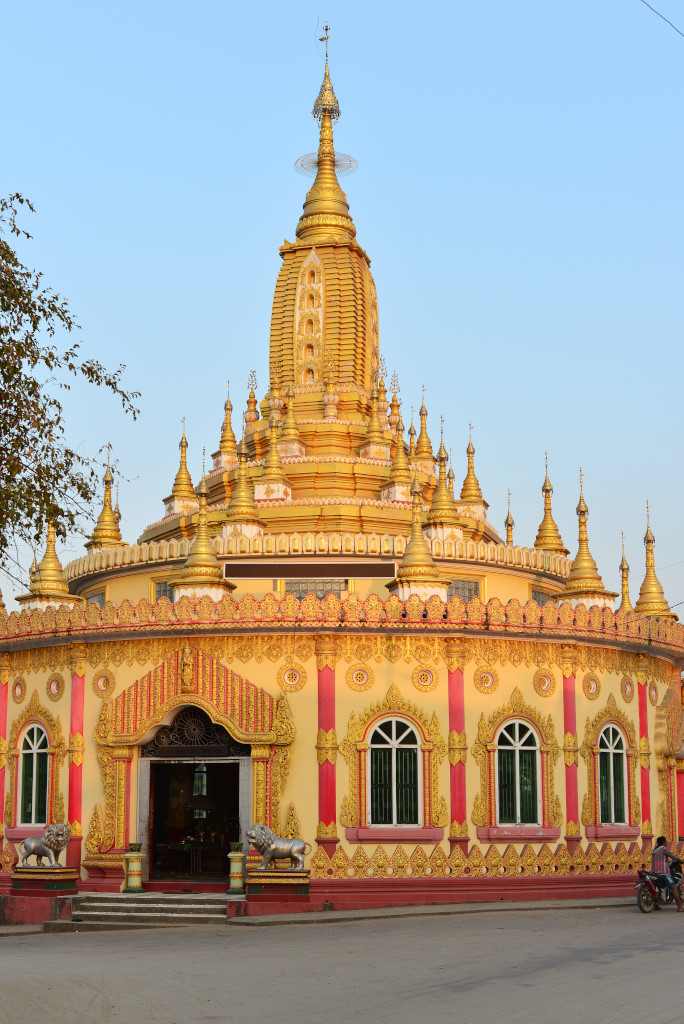 The reception I get from the laborers toiling along the shoreline is a mix of indifference, surprise and vague curiosity, not that I would expect anyone here to be jumping for joy in any circumstances. One longboat crammed full of local women wearing conical bamboo hats is tremendously entertained by my presence, waving and cheering erupting as I point the camera in their direction. Telling are the filthy tiny children careening across the sand chanting ‘Hello money’, which says everything about who has been passing through here and for how long. Squalid improvised camps are strewn further along the beach, people bathing, even drinking the water where innumerable boats are berthed, which would really take a considerable leap of faith. As a defining element of the town, the port does little to raise the aesthetic sensibilities of the place, what with its grime, dilapidation and impoverished work force, but then again, transport hubs are never very romantic. 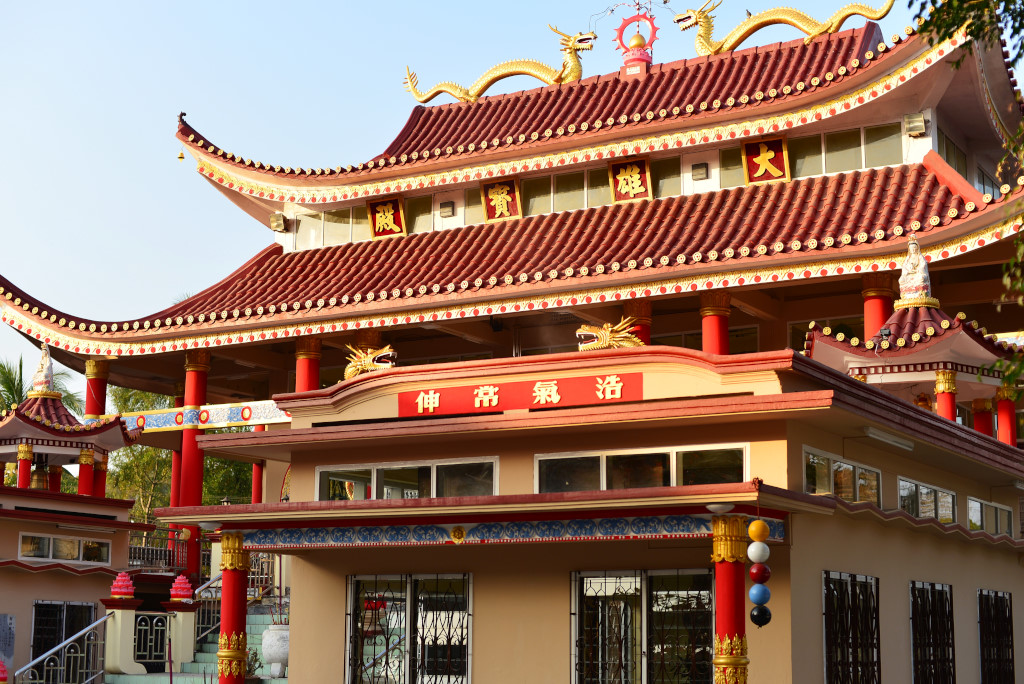 Bhamo is somewhat interesting, but small and definitely a much poorer proposition than the place I just came from, with modest if not poorly maintained Buddhist temples, and little in the line of outstanding features. The town is palpably dirty, the normally atmospheric traditional teak houses dilapidated if not on the verge of collapse. Tellingly, the walls of many of the more prosperous houses in town are covered in barbed wire and broken glass. Walking around this town with the stylized map in one hand and camera in the other, I still manage to get lost. The attempts at framing subjects repeatedly fall short of success, the fact of the sun descending on the far side of the river not helping much. 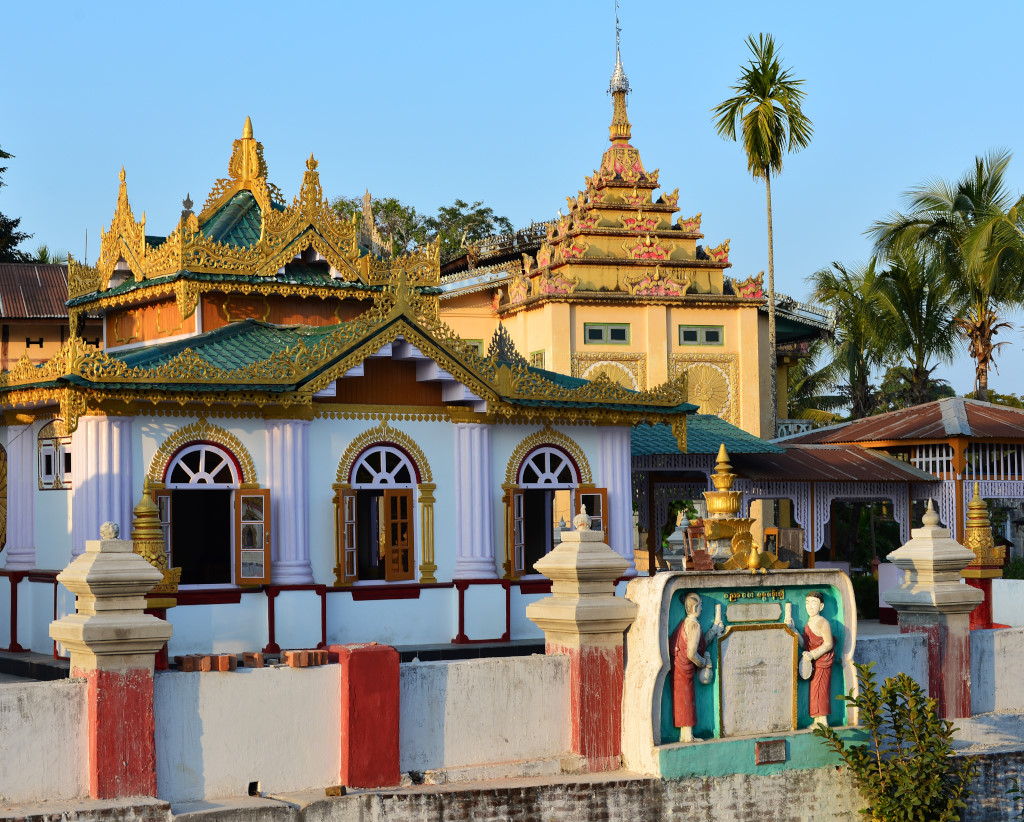 I need to get a walk through the town tomorrow morning so that I can see everything from an opposing light, which would probably have a visually considerably different effect. I tend to be very aloof when walking around due to the delicate discourse of not presuming that people should be friendly to you, and yet also trying to be aware of when people are directing their sense of warmth to you, which is often, particularly for young people.

I feel somewhat disconsolate wandering around Bhamo, which may have to do with the fact that the town is quite small and I can’t really get good shots with the sun in the western position, especially not of the boats being unloaded by the riverside. Shallow a sentiment – and obsessive, too. Initial impressions can have a strong impact, but then some greater degree of familiarization can also enhance one’s appreciation of a place. 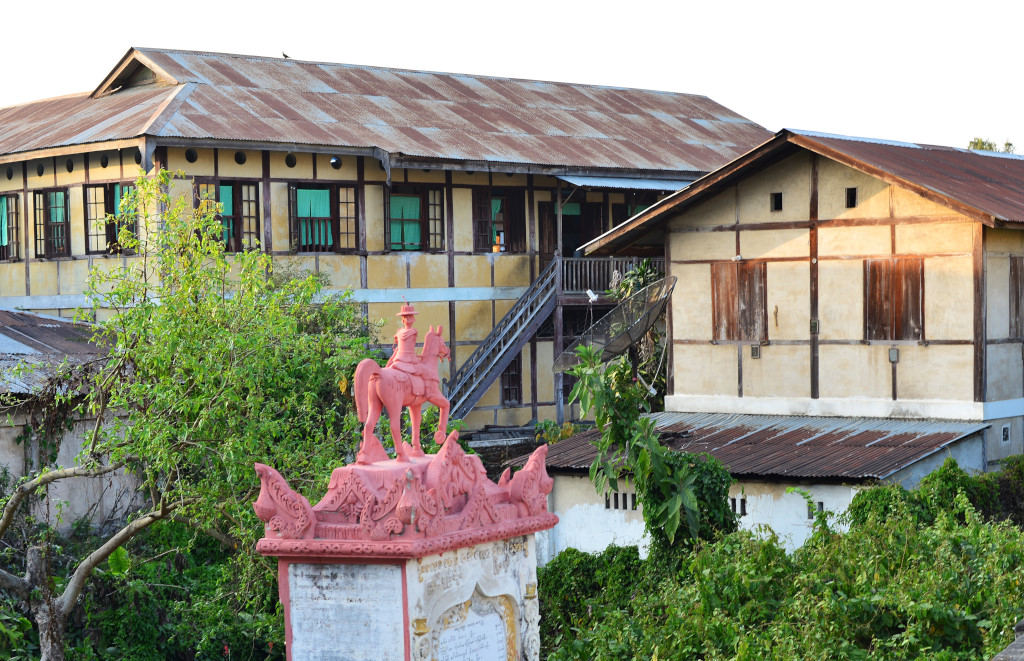 Telling is how feral the packs of dogs hanging out at the temples are, rabid, cowardly, starving, largely abandoned and ignored by the local population. I find the relationship people have to dogs here and especially in Thailand somewhat nauseating. Dogs are allowed to exist, but are essentially ignored, the animals bred for domestic purposes with nothing given back, essentially in limbo, tolerated but not provided sustenance. 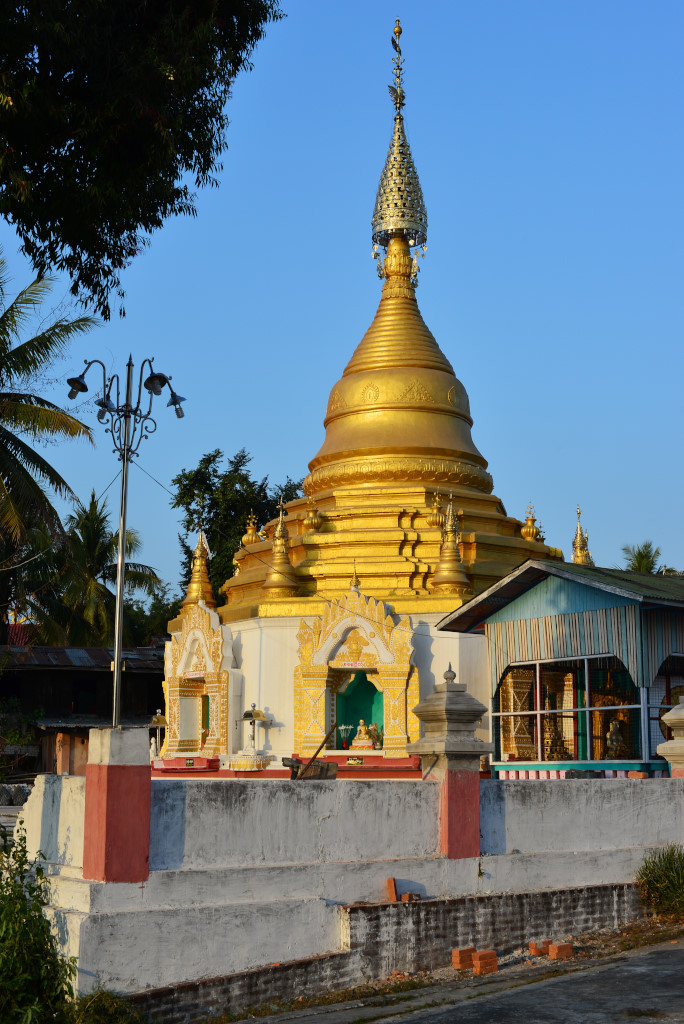 A group of young people wallow through garbage, competing with cows and dogs, a scene right out of India.

Sitting catatonically in a drinks shop, I have one strawberry ice cream sundae after another, numbly watching a Burmese soap opera with Buddhist chanting playing in the background. There are a number of quite presentable restaurants in town, but the buffet tables are full of the remnants of the morning’s greasy flavorless Burmese curries, which are not easy to take at the best of times. And the taint of fish paste is never very far away here, which makes it difficult to justifying eating anywhere to begin with. 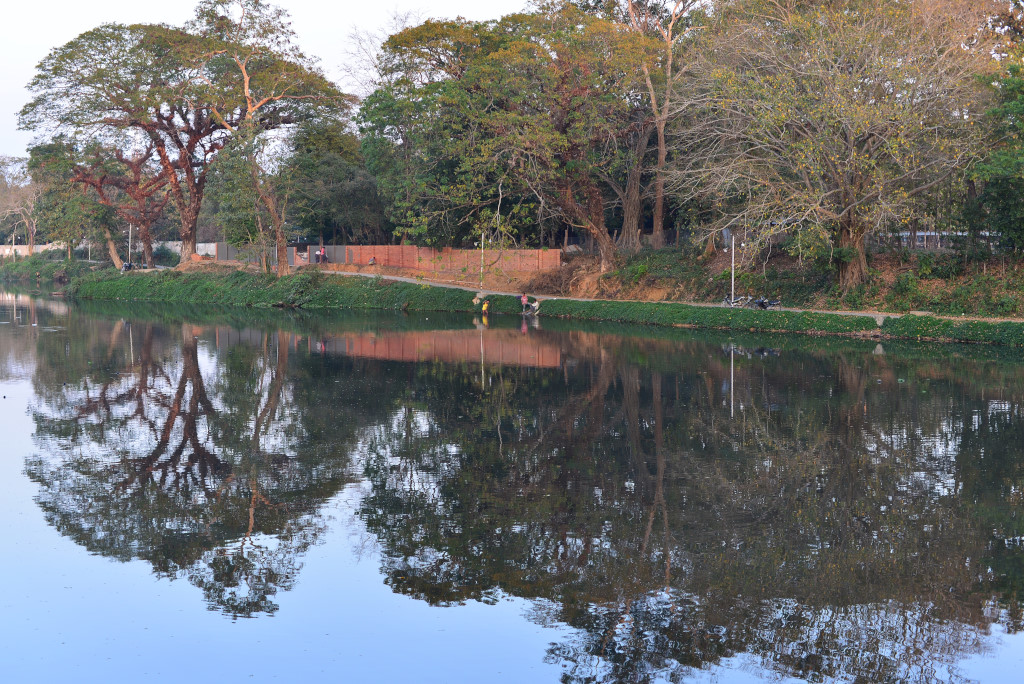 The Paradise hotel is a veritable paradise in this somewhat tawdry town, their cafe probably being the singular nice place to eat, and yet closed today. For the moment I am pointed to the Shan eatery a few doors down the street. I wouldn’t say that the Shan cuisine is some sort of panacea, but at least they are short on the use of fish paste, which the Burmese are crazy about. 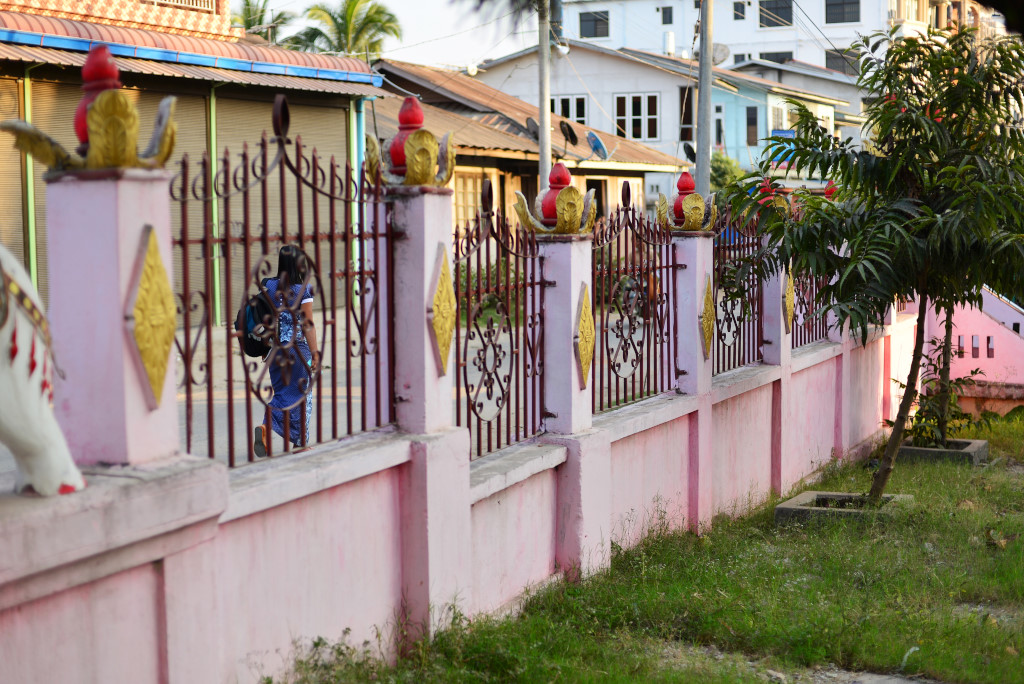