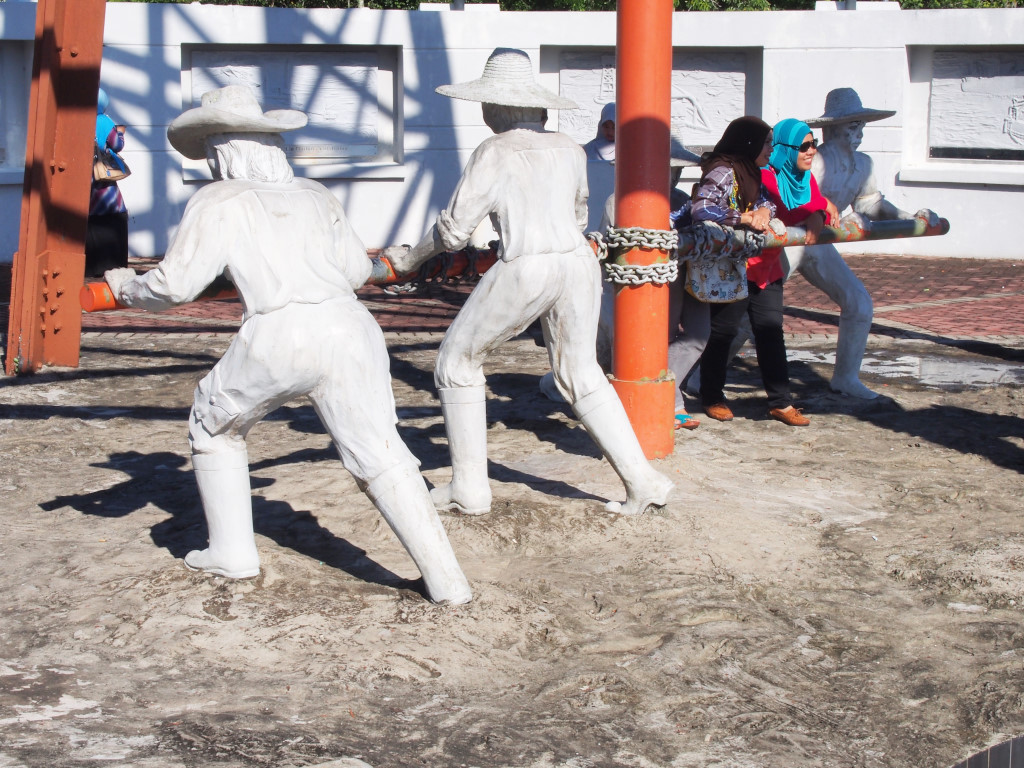 One of the young women working at the Miri Budget Inn taps on my door, calling to me. What does she want? If I want to stay in the hotel tonight, it’s OK, it turns out it is not full. Too late – I booked a room somewhere else tonight.
This is really quite frustrating, since I had wanted to start out early and spend the day in Lambir Hills or Niah parks, and now I will just be dawdling around Miri, as I have to change rooms. I could actually have done both, but didn’t want to make the day too stressful. Well, I may as well spend as much of the morning here as possible, catching up on my writing, and around noon pack my things and go. 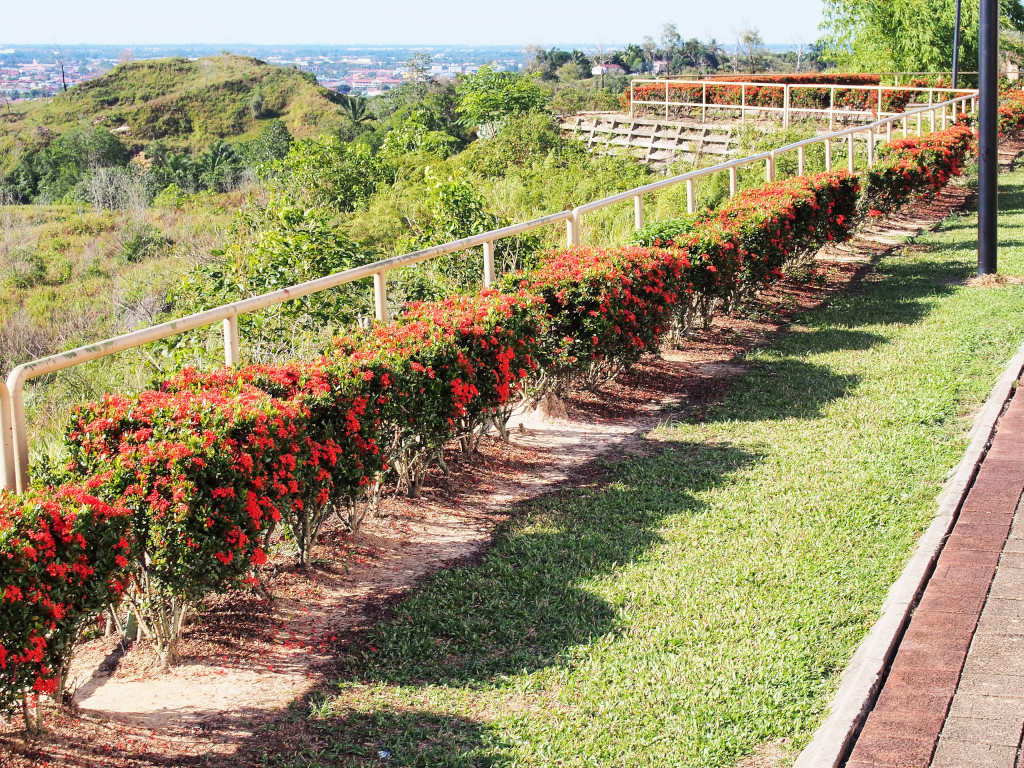 I feel a lot better this morning than I did yesterday, although still somewhat queasy. One last meal downstairs and then the walk over to Secret Recipe, where the young attendant persuades me that his English father qualifies him as a European, and by his preference he would rather only associate with other Europeans, and not Asians.
In fact, if I have noticed correctly, he doesn’t even look Asian, even though he is mostly Chinese and Iban. I listen to his diatribe patiently and want to play along, but it just seems a bit too ridiculous at the moment. At least if the coffee here was decent, but it is not that good, and I should really be heading back to the hotel. 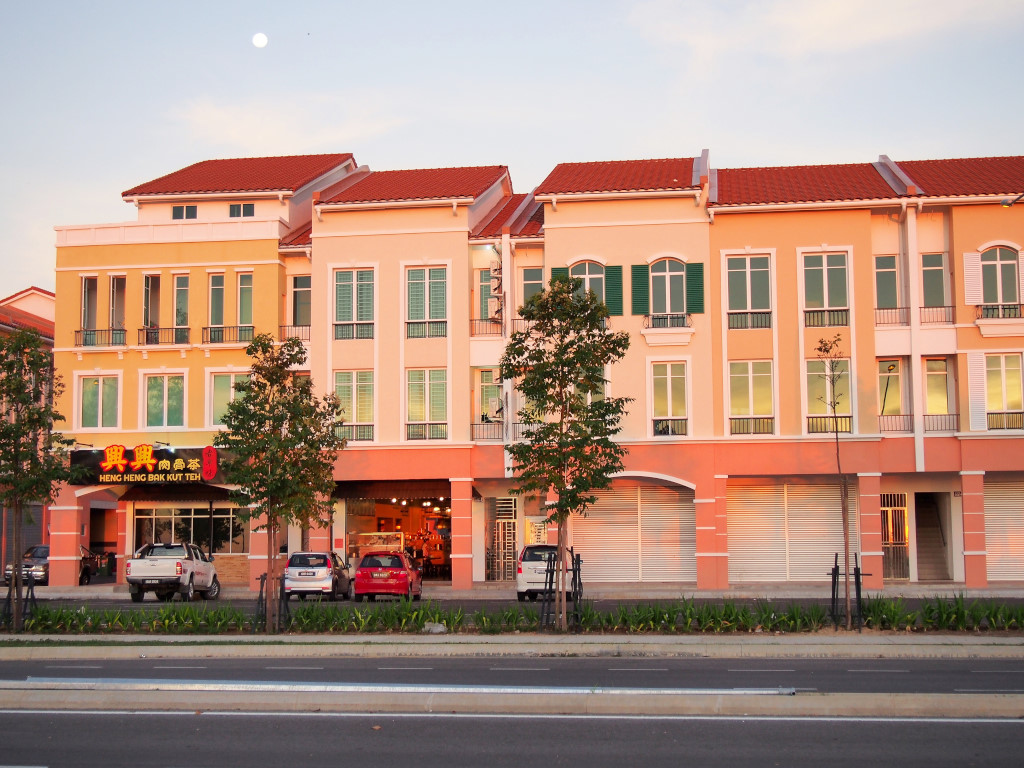 Although the taxi should only cost 10 RM, I am assured that the owner of the hotel will take me to the Raja Inn. Astonishingly, he gets lost in the centre of town, even after I repeatedly give him instructions. He tells me that the hotel had been full, except that someone booked five rooms on Booking.com – and then canceled. 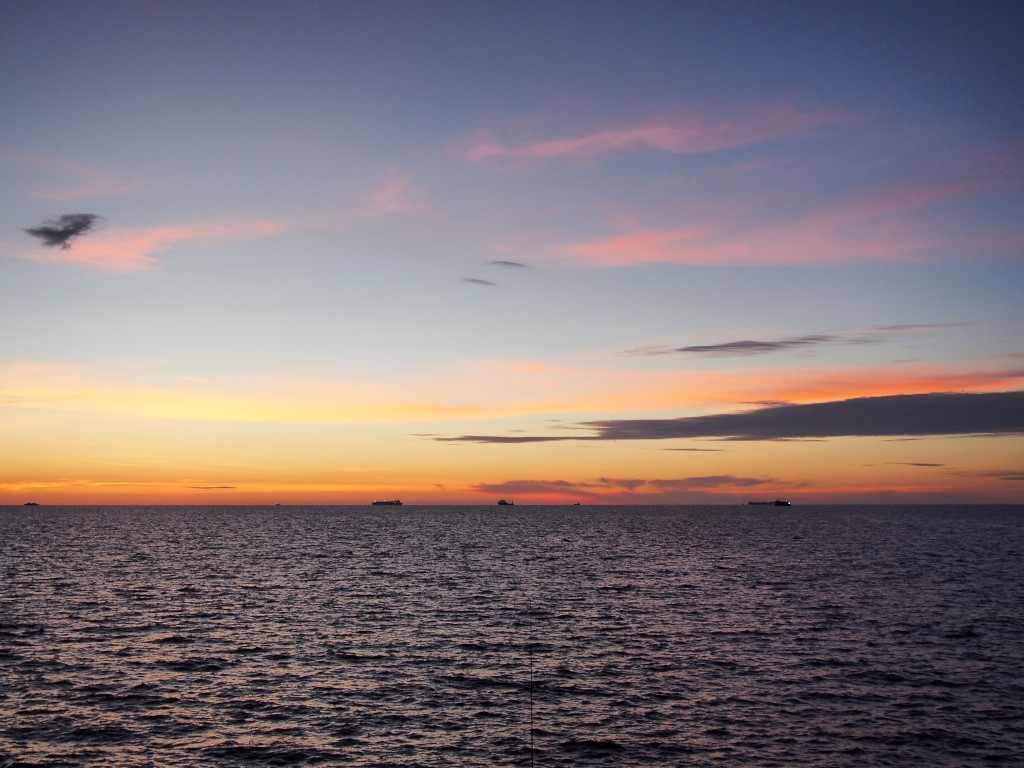 The site is apparently the only one you don’t have to put a credit card down with, so I can just imagine the amount of havoc bookings over that website create. I feel bad for him, as he lost the revenue for five rooms over the long weekend, where most hotels will sure be full. On the other hand, there will be increased walk-in traffic, and others will grab those rooms. 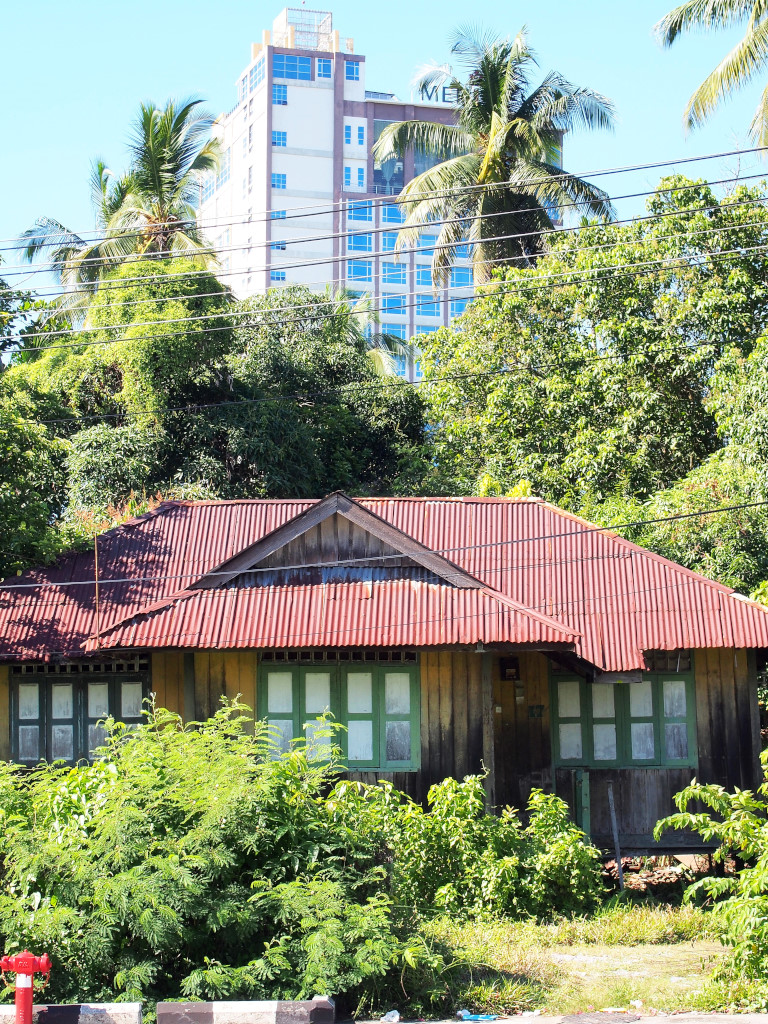 Just as I thought, the Raja Inn is located behind the Miri Handicraft Centre and Taman Semoja, with a bright sparkling new facade, even better than in the photos on the web. The lobby is simple but smart, another good sign, but while the room on the second floor is not as small as the rooms at the Miri Budget Inn and the places I saw with Frank two days ago, the room is almost as basic, although a touch more upscale – just a touch. 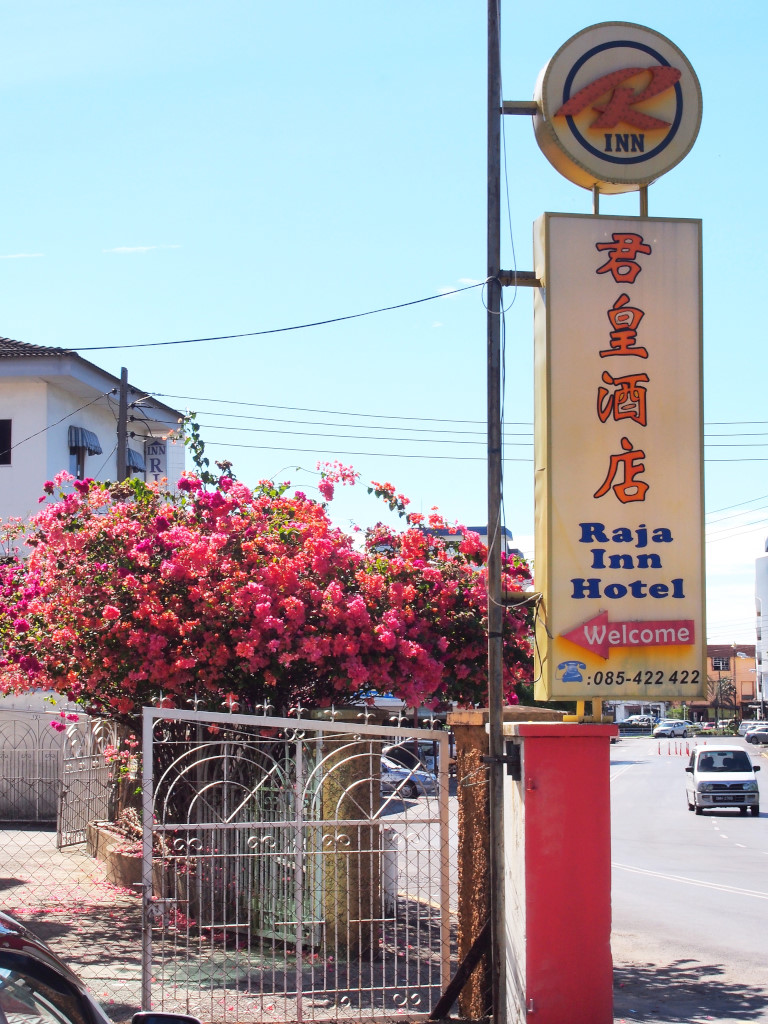 But the big difference here is that there is no internet in the rooms, and the access in the lobby is very slow, not really acceptable by contemporary Malaysian standards. I get some vague excuse about the internet on the upper floors currently not working that well, but I suspect it maybe the norm. 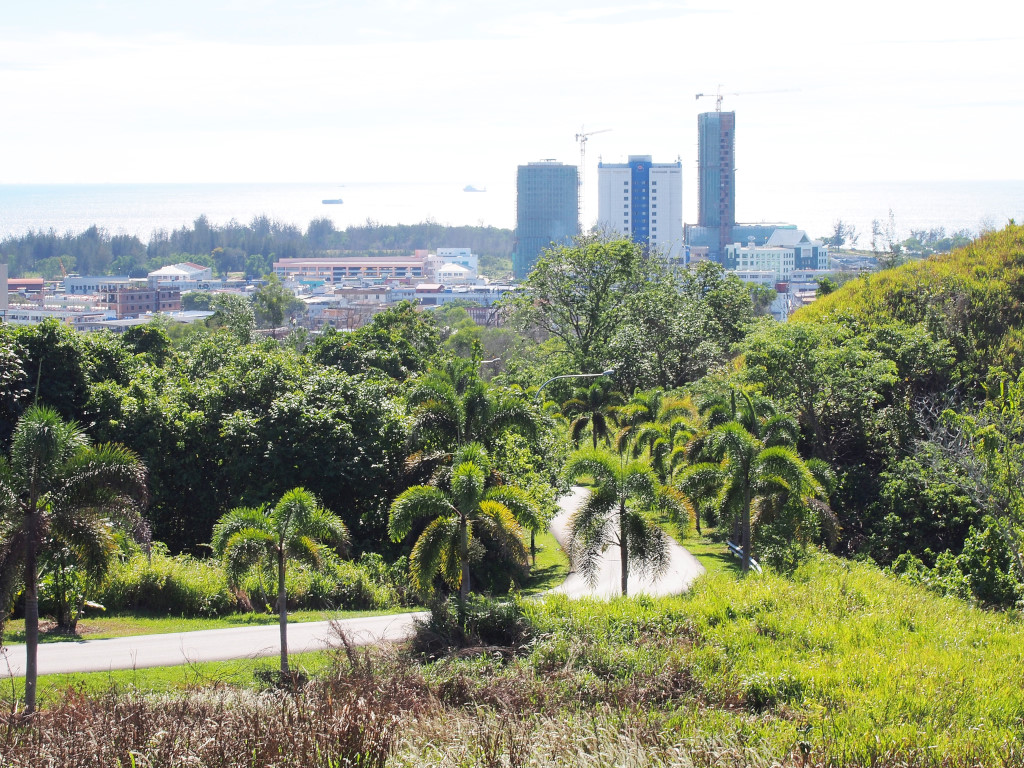 Having checked in and deposited my things in the room, it is time to do something, anything, and the only real attraction I haven’t seen yet – in fact, the only apparent attraction in town to begin with – is the oil rig and petroleum museum on Bukit Canada (sic). 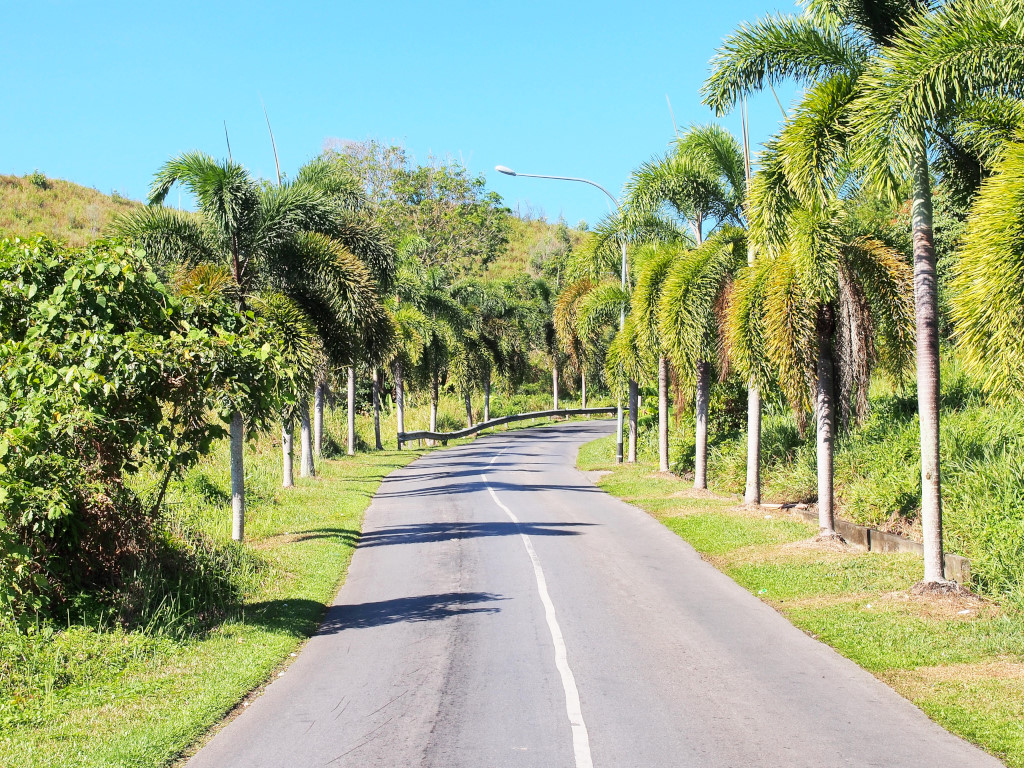 The heat is palpable, but crossing the highway and climbing up into the green, I can feel how little energy I have, and how quickly that energy is being sapped. It can’t just be the heat – this must be the remains of the stomach infection. 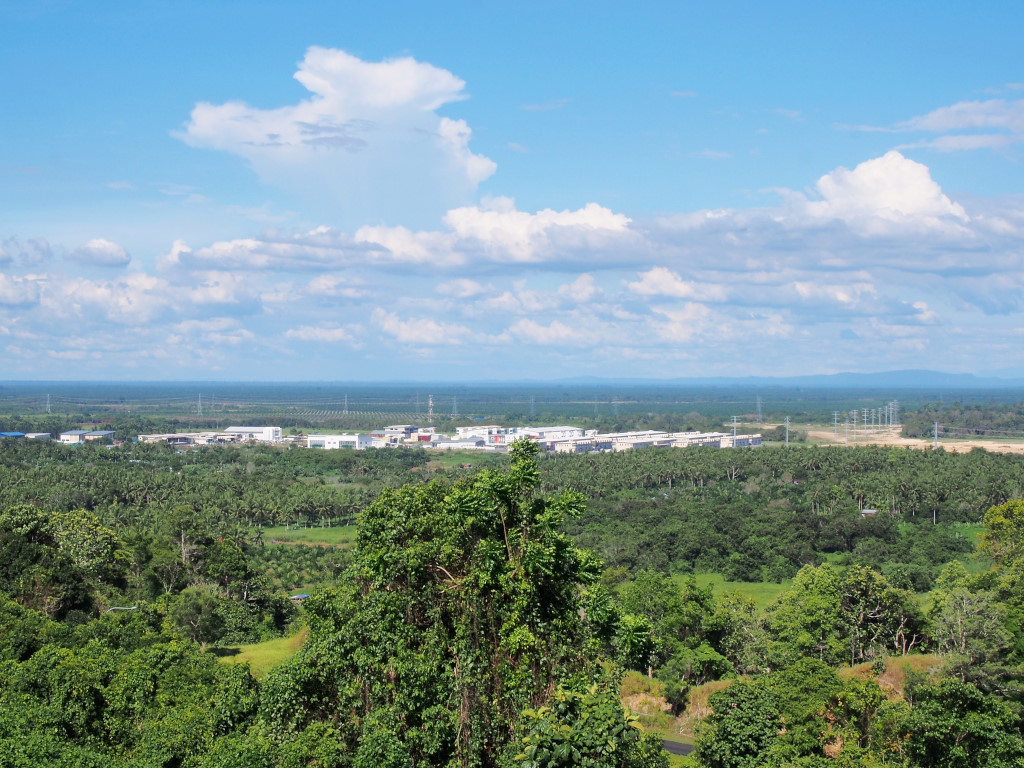 I slog along the paved asphalt road weaving up the shallow hill, singularly undramatic if it weren’t for the fact that Miri itself is singularly undramatic. For some reason, the roadbed is littered with the broken glass of bright green beer bottles, somewhat inexplicable in this conservative country. 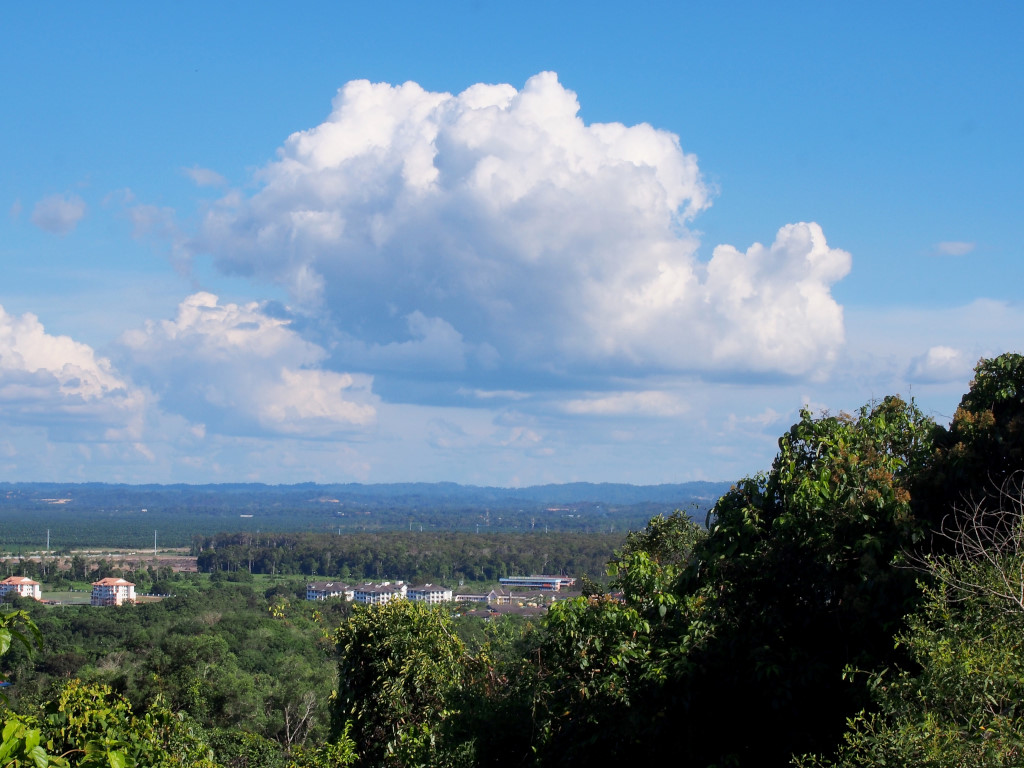 The hill itself is not that high, but seems to be part of a low ridge that runs along the eastern periphery of town, the western boundary defined by the South China Sea, clearly visible from this height, the open waters dotted by a few tankers. It seems difficult to understand as to why Miri is set on and yet entirely divorced from the water, as if to avoid every opportunity to join the sea. 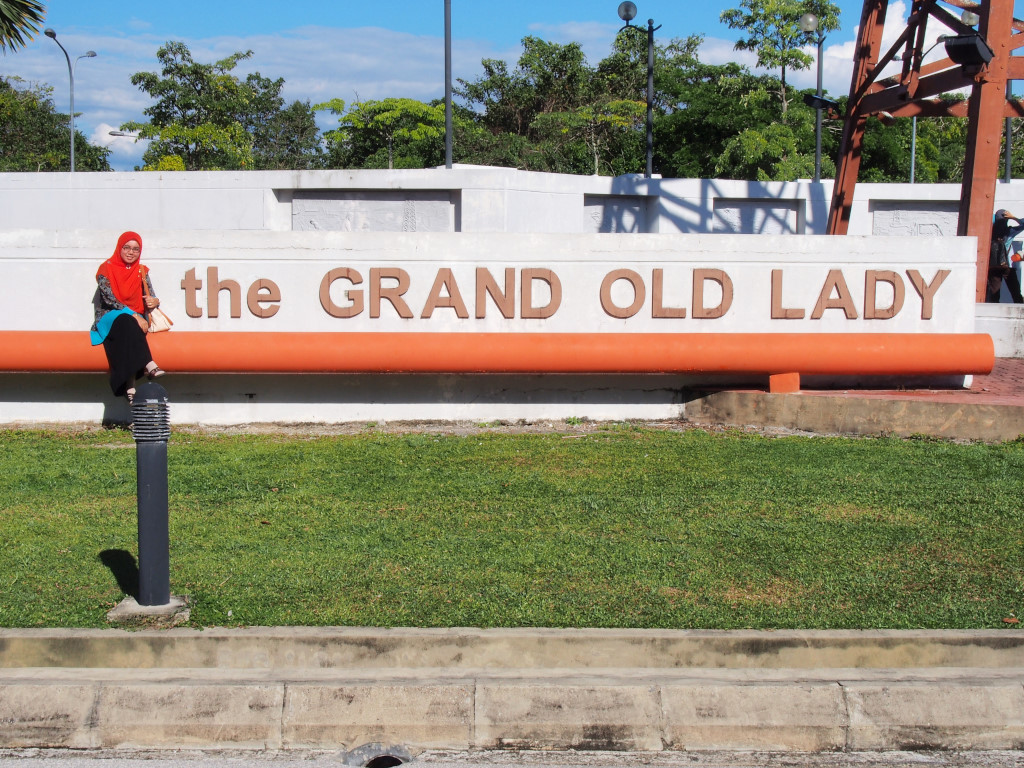 To the east lies a broad plain, bounded on the horizon by low mountains, and other than a strip of development below us, there is nothing but green, albeit the ubiquitous oil palm plantations that define this region. After most of the natural biotope has vanished, the provincial government is making belated efforts to increase penalties on illegal logging, a disingenuous effort at best. 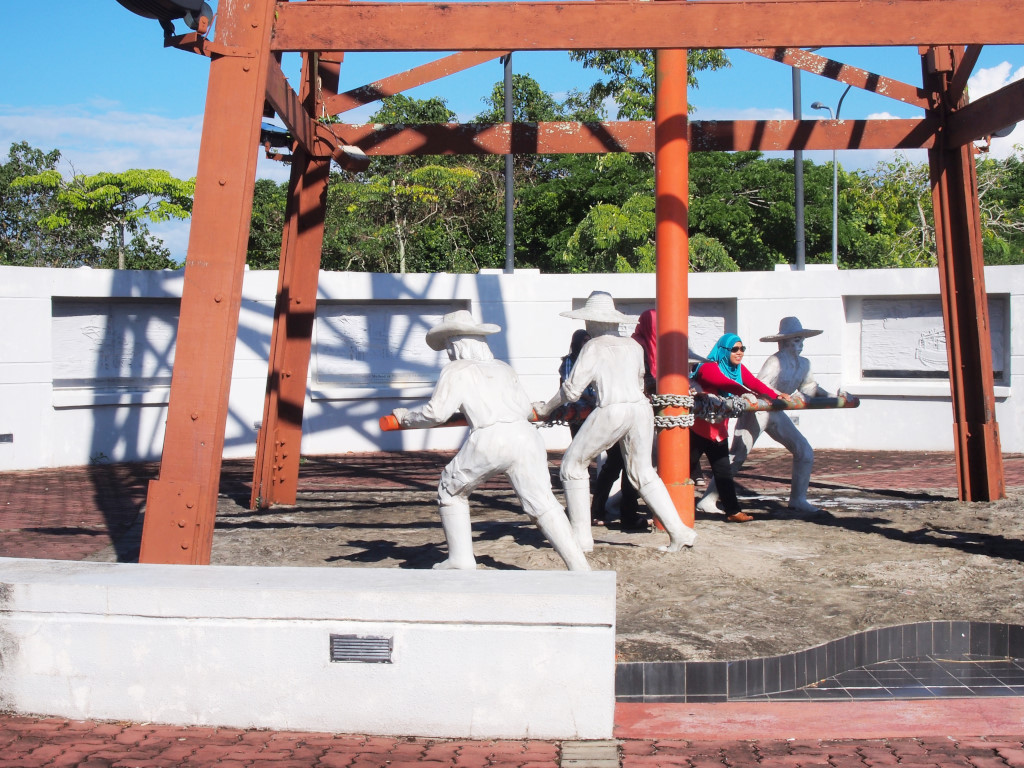 Up above lies one of the great attractions of the area, and that is the incredible blue sky with stunning cloud formations, and leading me to wonder what amazing sunset will be in the offing tonight. 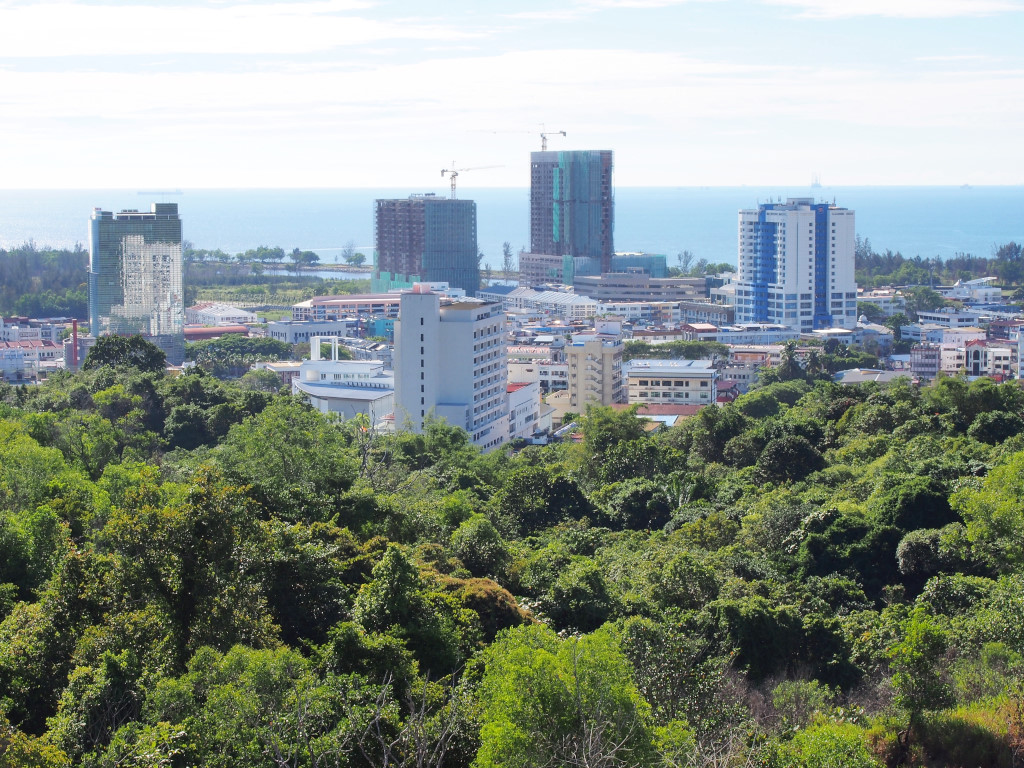 So the next destination will be the shoreline. But how to reach it?
Returning into town, I cross through the centre the now vaguely familiar alleys and major streets that comprise this pleasant burg. It turns out that the Raja Inn I have transferred to is located not far to the south of the core. 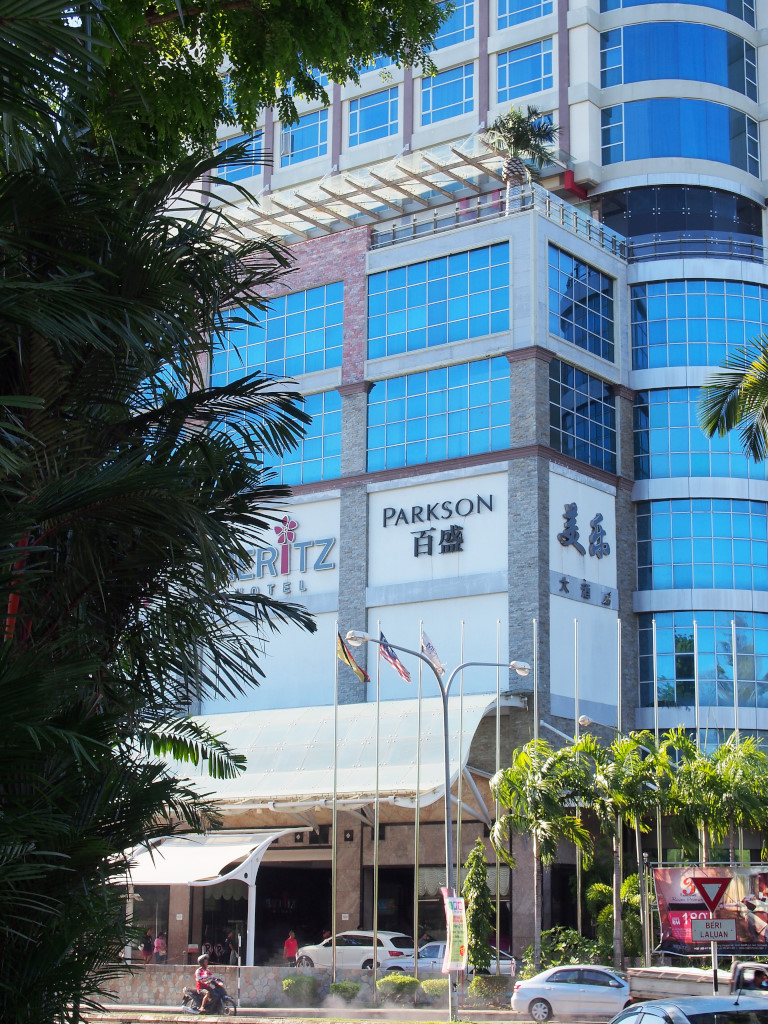 The luxury hotel that soars above town on the waterfront side is actually not on the sea, and the avenue of palms passing by the hotel arcs downward, into the nothingness of new developments, with no views or access to the ocean visible. 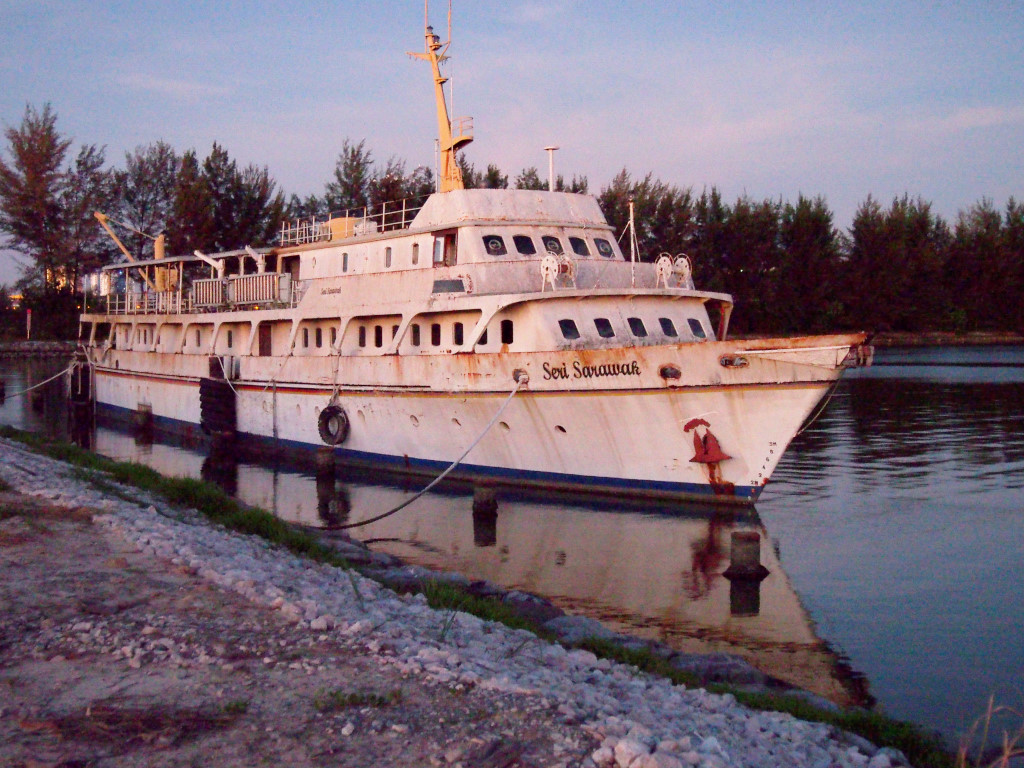 I would like to access the point on the map that juts out into the sea, but it seems there is a considerable difference between what the map displays, and the actuality on the ground in the only partially completed subdivisions that reach further down along the shore. 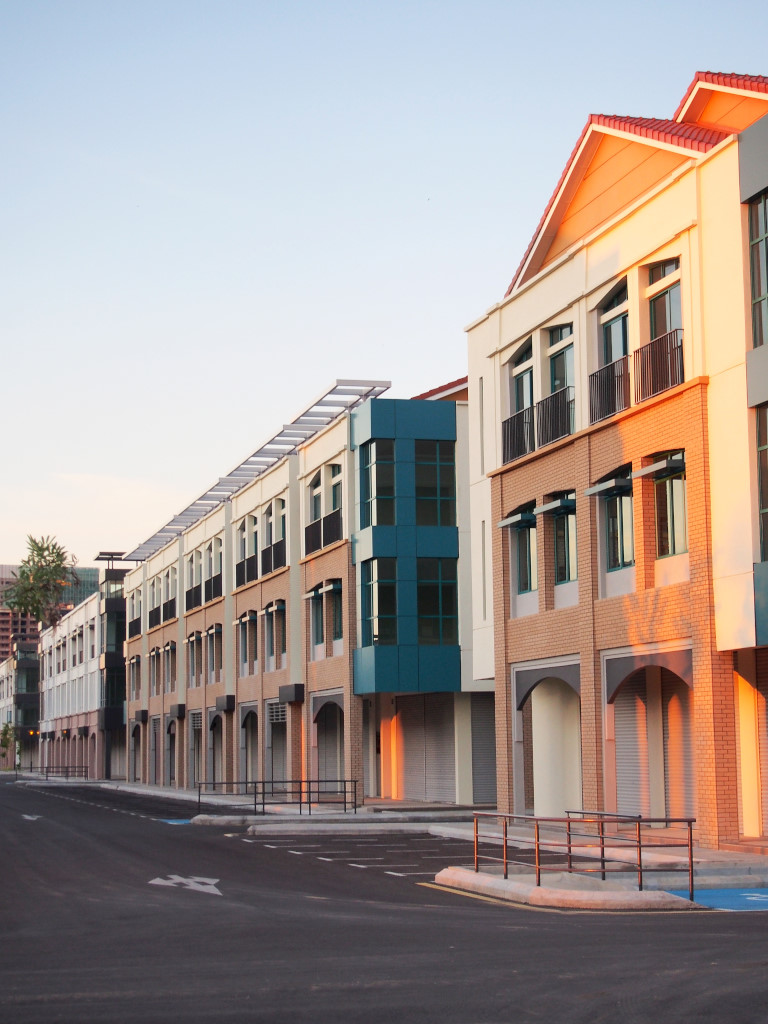 Large, uniform developments of identical storefronts unfold before me, utterly characterless and almost exclusively vacant, one block following the next, the broad empty streets coming as a shock on this continent of relentless crowds and traffic. 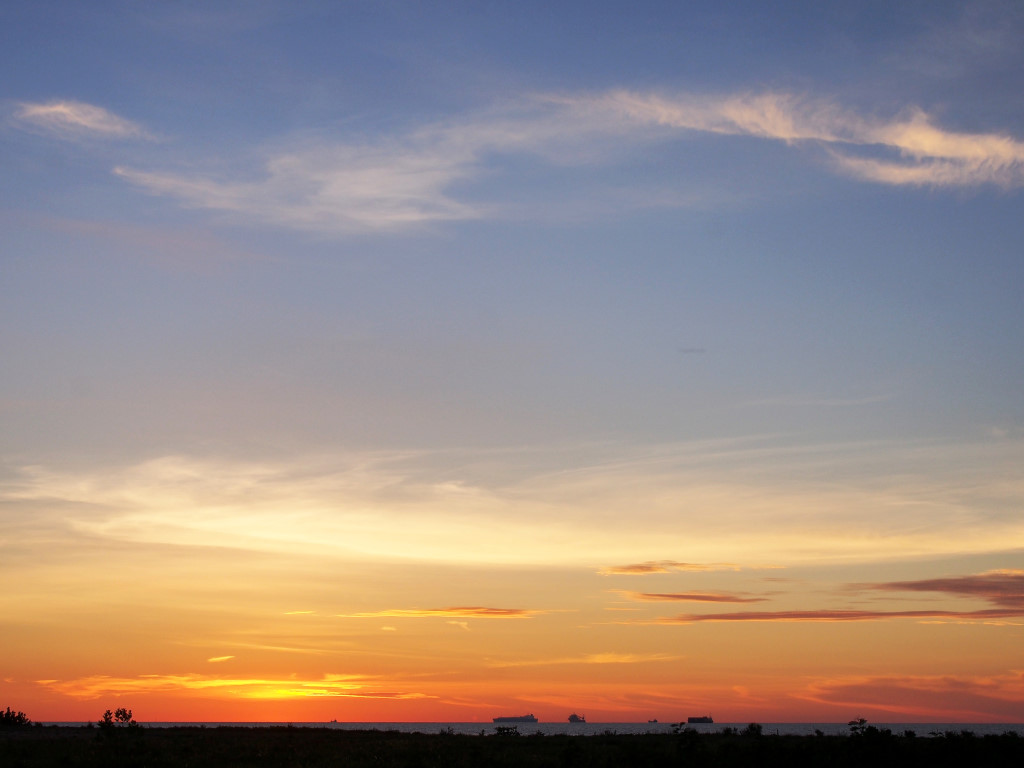 A network of paths on the west side of the barren Jalan Marina Utama seem to suggest a waterfront park that may provide access to the sea in some fashion, but persistent exploration of the trails peters out into undeveloped land, separated from the sea itself by substantial berms nestled amidst obscuring scrub. 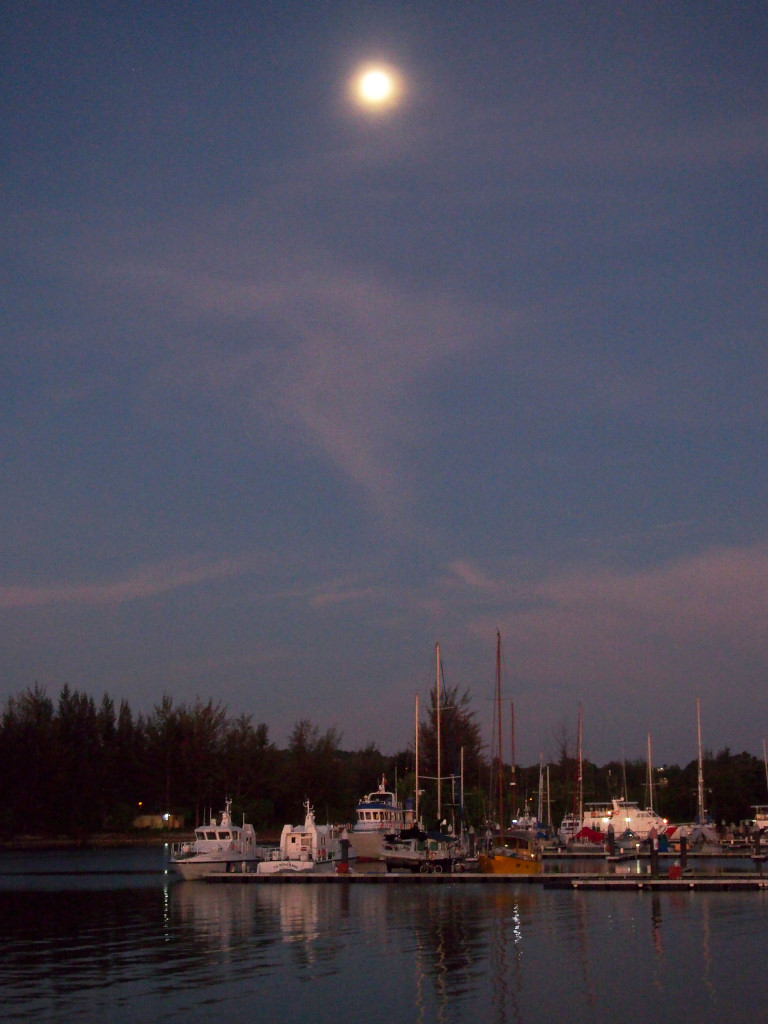 And finally, here it is, a dirt trail that weaves past the marina, then up the embankment, where a smattering of locals have already found a comfortable place to enjoy the spectacular views of the sunset over the South China Sea. 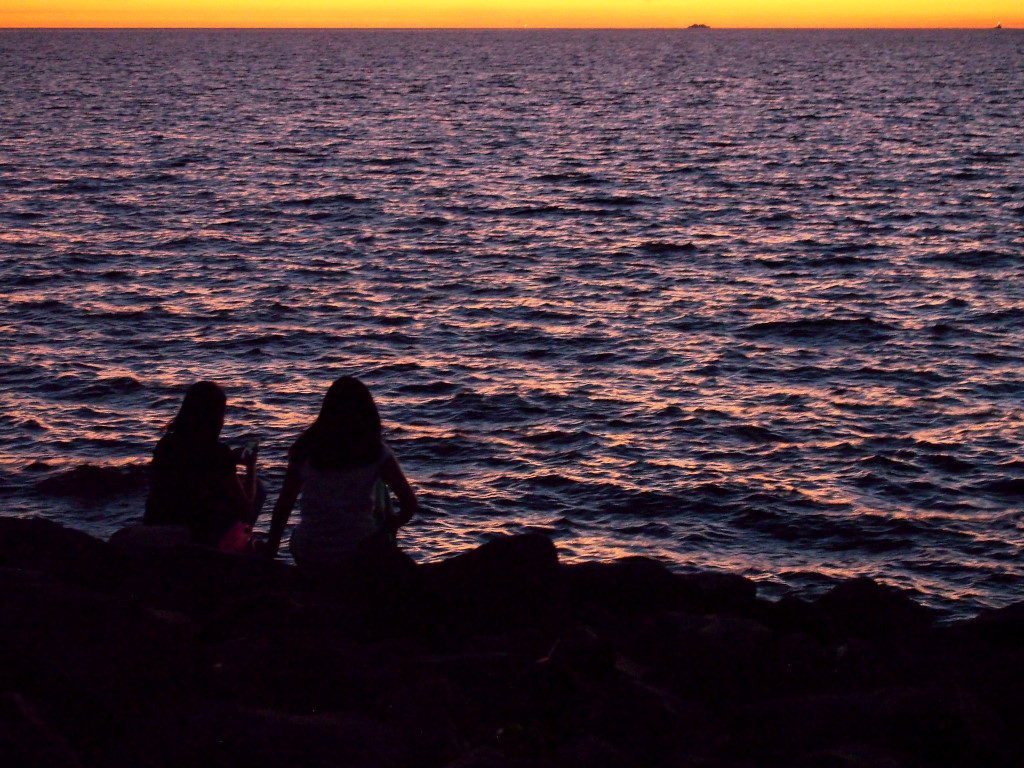 Returning into town, I weave back through the new developments that separate the town core from the sea, a modest, brightly illuminated locale emerging mysteriously from the darkness, the darkness again enveloping the area, the handful of customers busily consuming their modest fare etched against the emptiness of the Sarawak night. 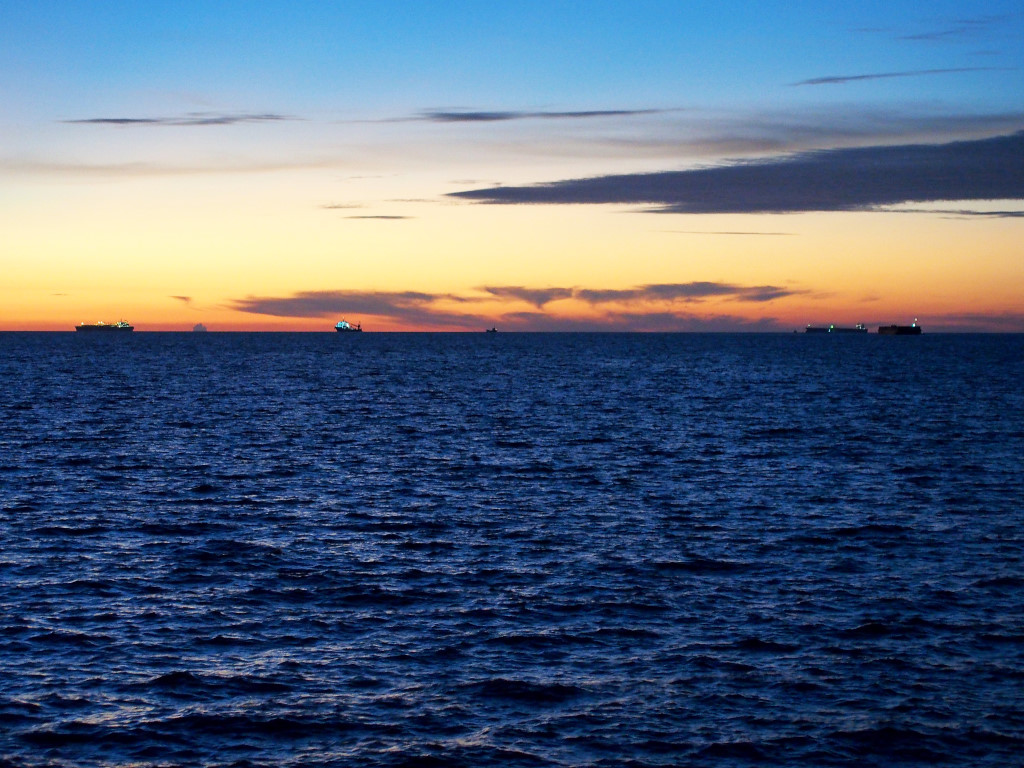