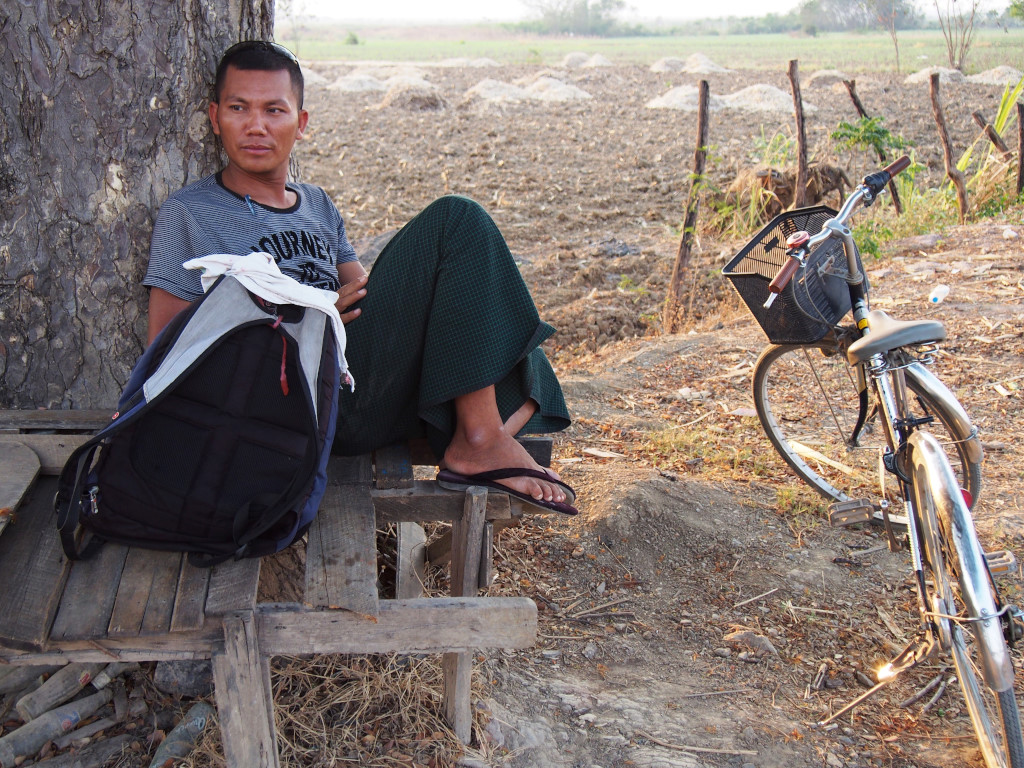 Loud banging and shouting echoes from the courtyard to the upper rooms from the earliest hours of the morning. I am not sure if it originates from the hotel staff or the guests staying in the hotel, but it is truly annoying.
After some time spent writing and generally attempting to recuperate from the cold that has brought me down, a breakfast ensues on the upstairs terrace, somewhat disheveled possibly due the party that was busy howling away in the early hours of the morning.
The terrace reflects a generic local stylishness, gilt medallions interleaved between the tiled balustrades, through which good views are offered of the comfortable residential neighborhood and its regal temples. Breakfast itself is nothing spectacular, the mandatory fried noodles topped with eggs sunny side up, accompanied by the terrible package coffee and diced overripe papaya. 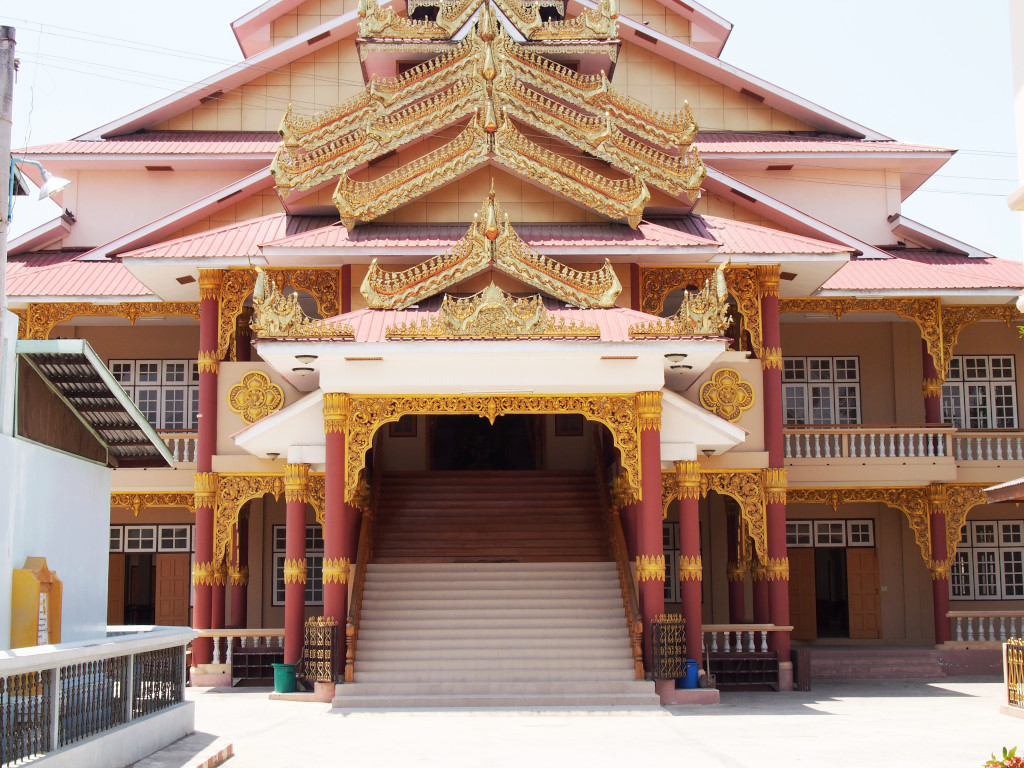 I am feeling very sluggish and unwell, and only hope that getting that additional coffee into me later will make a world of difference, a sad commentary on the state of my mental and physical health. The tamarind trees reaching up to the rooftop provide an impromptu commentary on Burmese food, the tender young leaves a tasty treat contrasting with the fragrant sweetness of the fruit of the tree. 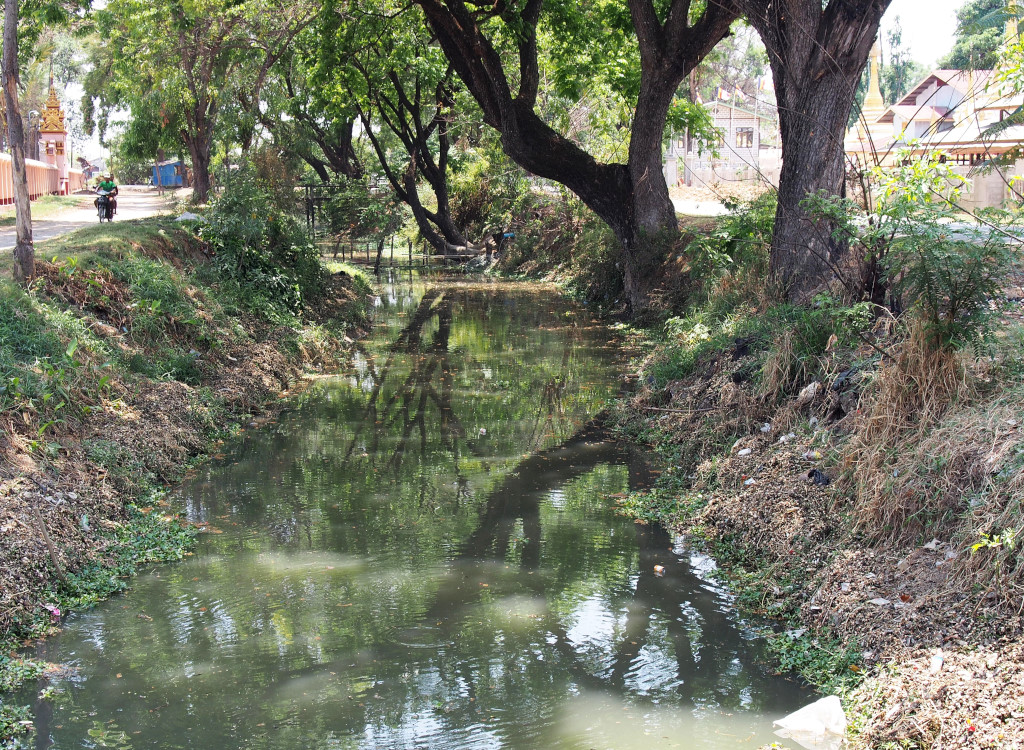 Meandering down Phaung Daw Side road towards the canal, I look for the alley leading to the fancy bicycle rental place, wanting to at least eliminate that option prior to renting a plain and cheap bicycle at the travel agency I visited yesterday evening. I cross paths with a young Canadian woman of Japanese descent from Toronto currently exploring the town and lake, who tells me she conjured a bus ticket for tomorrow. But wait, I was told yesterday that there would be absolutely no buses running by the 13th …

So perhaps there is a back door, and while most bus companies don’t provide service during the Water Festival, perhaps some actually do? She really has little idea, being somewhat detached and wandering around with fairly serious cuts on her arm resulting from falling off her bike, a seemingly small event that could turn her trip upside down very quickly.
The bicycle rental shop I had been thinking of renting from has carbon fibre mountain bikes that would be awesome to use, except that I am not quite motivated to pay ten times as much for the unnecessary luxury of using such a sophisticated bike on this fairly rudimentary terrain. 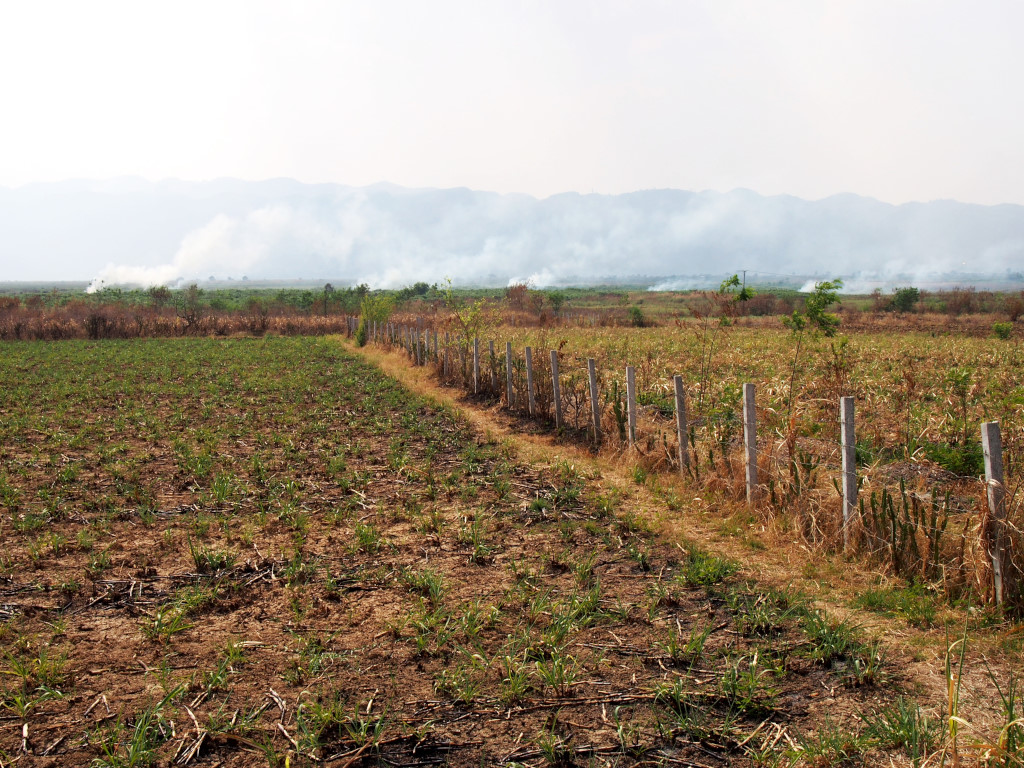 The few travel agents I speak with tell me that there are in fact some buses running on the 13th, but after that there will be nothing from the 14th to the 17th, absolutely no bus service at all. And yes, there are direct buses to Magwe, which don’t in fact take more than 10 hours, which is surprising, but apparently this stretch of road also has been subjected to significant improvements.
The same coffee shop as yesterday awaits, where a young oversized Dutchman provides momentary entertainment for the diminutive locals. At 2 pm, it seems somewhat outlandish to even be trolling for rental bicycles, considering that passing a significant portion of the side of the lake, then returning back to town could be a somewhat demanding affair.

I will have a maximum of 2 ½ hours for the out- as well as inbound components. Unfortunately, renting the cheap bikes is another problematic affair, considering that the few larger bikes available at rental places have wheels that are entirely out of true. I realize that these rental bikes are very cheap, but at the same time the obvious lack of interest in maintaining them puts potential unknowing renters at risk, which the owners are seemingly fairly ambivalent about.

I settle on a bike at one shop that meets all the prerequisites, except for the fact that the front brake rubs against the tire rim, but as the problem is not so serious, I may as well at least make an attempt with this bike as opposed to losing more time looking for a better bike, most having long since been rented out. 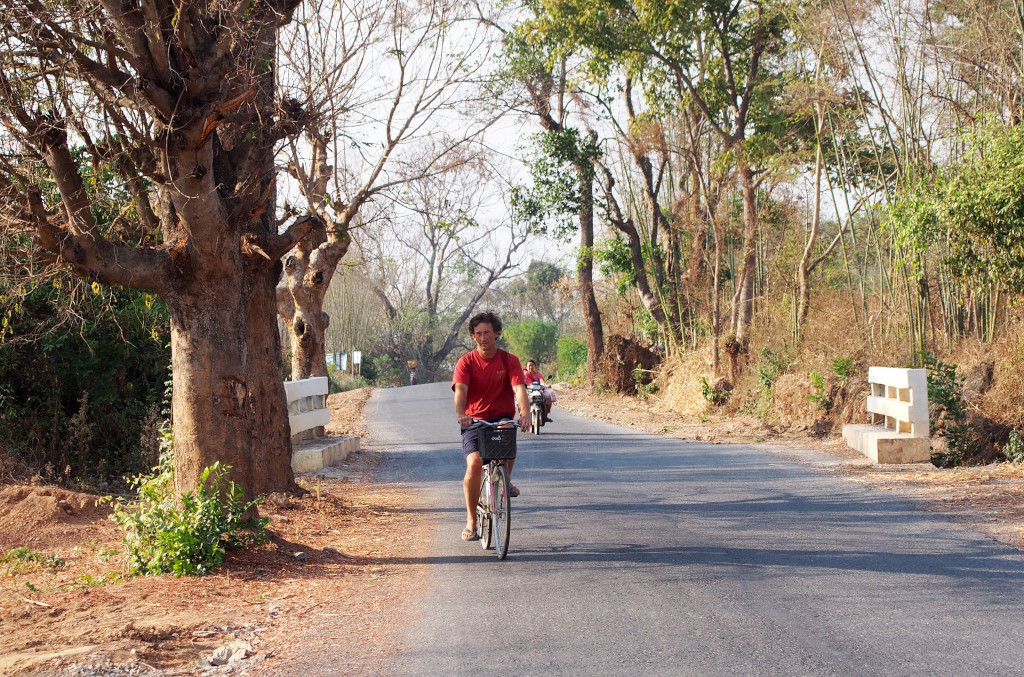 Now the problem is to determine where the road to the east side of the lake can be found. The somewhat non-descript outliers of the town lead to the equally pedestrian rural landscape sandwiched between the low mountains on one side of the road and shimmering lake in the distance. I pass by a winery whose presence surprises me, given that the heat simply can’t be too beneficial for the grapes.

The landscape is flat, scrubby, the young green water-filled rice paddies situated amidst indeterminate scrub and patches of houses, with a few small stores abutting the road. Despite the overwhelming amount of tourism that normally plies these parts, the locals are unfailingly and genuinely friendly. It’s certainly easy to take the welcoming and kind mindset of so many people in this country for granted.

The road meanders past modest settlements consisting of no more than a few shacks here and there, although the somewhat pedestrian landscape is amended with a few modest accommodations to tourism, here and there signs in English. Then there is the blight of luxury tourism, the distant coastline stained with giant luxury lodge complexes, strange, considering the unassuming nature of the place.

In one store, the owners confirm that the big hotels in the area belong to the cronies of the junta leaders. An issue that comes to mind traversing this modest rural landscape is the extent to which agricultural land has been removed from the community and the introduction of luxury hotels driven costs to prohibitive levels for locals. 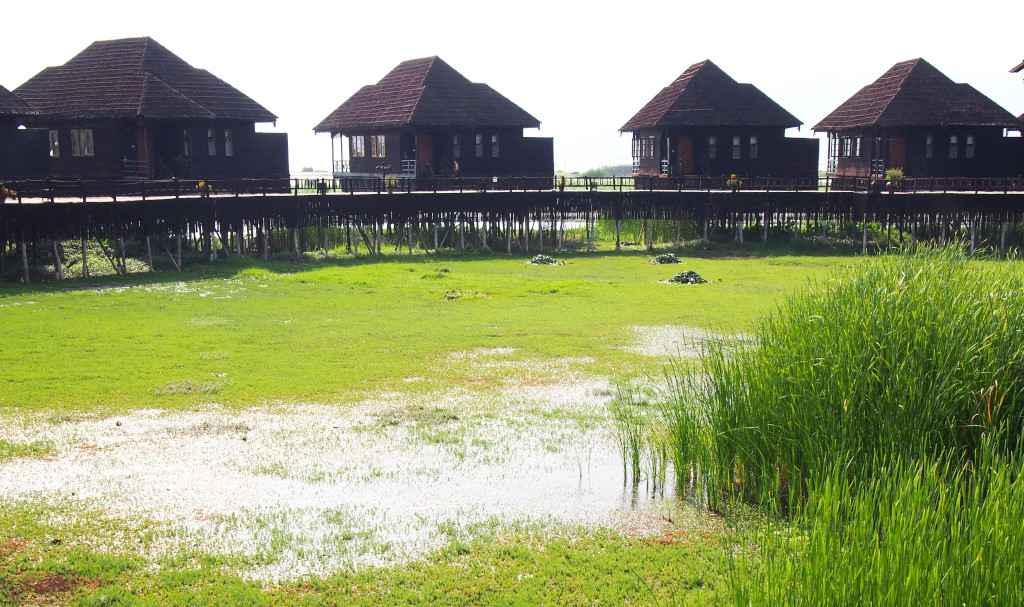 There would be a certain amount of spillover of benefits, but the luxury hotel enclaves operate on a purely self-contained basis, and other than hiring local workers (at minimal wages) for construction, operation, buying food and materials at elevated prices, the huge monies commanded and transacted would have limited benefit to the local economy.
The day is surprisingly not that hot, the occasional gusts of wind seeming to moderate the normally blistering temperatures. I encounter farmers working in the paddies, planting the first round of rice, others planting onion seedlings that will be ripe sometime in the rainy season, to be followed by peanuts. Their planting grounds and paths weaving between the furrowed soil are divided by simple fences built of simply strung together bamboo poles.

Even here the curious habit young local men have of dying their hair outlandish colours is apparent, a proclivity that apparently flourishes in anticipation of the water festival.
Given how late in the afternoon I left, it will be time to head back soon without even having reached the supposed concentrated hotel zone, but then given how unvaried this landscape is, it’s all the same to me at the moment. 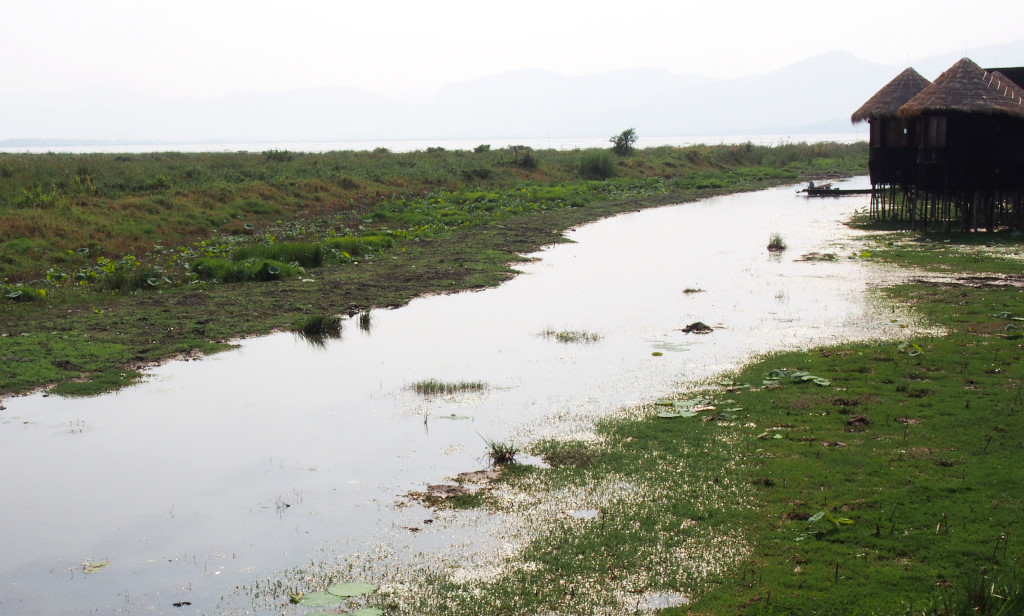 Emerging from a side road are two young Danish women, who took in the home cooking advertised on the roadside sign, having nothing but good things to say about the meals that were offered, although their perception of 5,000 kyat for the meals as being cheap seems a bit misguided to me. It would seem that the success of tourism is based to a fair extent on being able to charge visitors oblivious of local costs healthy sums.

They have enjoyed their time here but after a few bike rides and boat trips across the lake are somewhat at loss to understand what the attraction of Inle Lake is. They found the boat trip to unintentional destinations along the lake more interesting than the destinations considering part of the standard repertoire.

The two are on a short vacation in Myanmar, thoughtful as befits their cultural heritage, and with a fluency in English that befits their education. They are leaving tomorrow also, making me wonder as to how abandoned the Inle Lake area will be once the Water Festival begins.

One of the great appeals of traveling is to run into people on the fly and joining into their experience for some brief period of time, then moving on again. 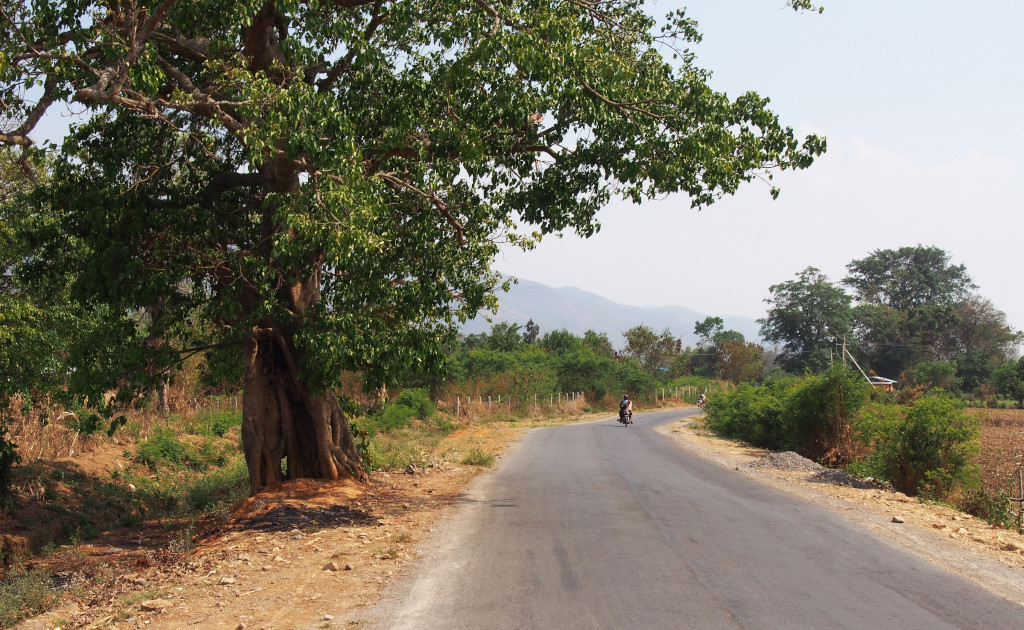 I approach the Lin Htett traditional Burmese restaurant, but there is no way I want to think about ingesting the fish sauce-laden dishes, as motivated as the few westerners in the establishment seem to be. I love the idea of eating traditional Burmese food, but would happily jump on the chance to ingest anything but.
Just to try something different tonight, I consider the Sunflower restaurant, which turns out to be even more incredible than the Sin Yaw yesterday. Perhaps it is nothing more than sheer coincidence, but the food is clean, tasty, reasonable in portions and economical to a fault, similar to the food I had yesterday evening, if not even better. 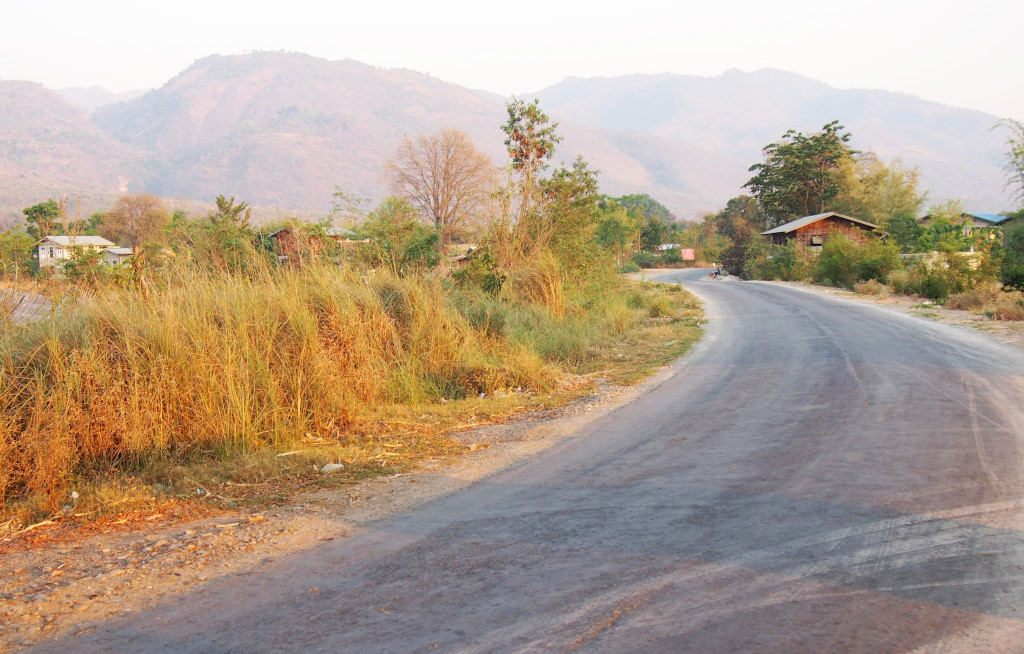 The dry Shan noodles are somewhat oily, in a mild peanut curry consistent with the dish from yesterday’s fare. The greens in the tamarind salad are not overdone to the point that the flavour has entirely dissipated, the salad amended with finely diced white onion, tomato, garlic and chick pea flour. The absolutely amazing orange squash soup features large chunks of goodness bathed in a clean broth flavored with lemon grass and mint, simply fantastic, and well beyond anything I could imagine that would be served in town.
Behind my table, the two young women are seated to whom I can’t resist from making food recommendations, the Ukrainian nearest me radiant and sweet, her Croatian-German counterpart brazen and somewhat callous, her defensiveness possibly resulting from her loss of freedom, the sewing of wild oats in her younger years across the most exotic countries now limited to short-lived and relatively unimaginative vacations.

We discuss the challenges for women in many of the countries of the world, but for the Croat these challenges are academic, given the amount of time she spent in the Middle East. Now there could be peace, tomorrow there could be war – it’s always been this way, she states bluntly, giving examples of situations in Israel and Egypt where she had very close brushes with death.
Other than a handful of foreigners in town, there are very few Burmese tourists visible, the hotels presumably mostly empty. So do locals come to Inle Lake? If so, where do they stay? Are there cheap guesthouses in the outskirts of town where they all hide out? Do they stay in the villages around the lake or in local monasteries? Or perhaps Inle Lake is resolutely reserved for foreigners …
I had wanted to visit a travel agent and buy a bus ticket for Magwe, to make sure I can get out of here during the mad rush on the 18th, although I am simply too exhausted and want to just return to my hotel room and rest. I am told the travel agents open at 7:30 am, so that is reason enough to get my sorry butt out of bed early and head first thing to a travel agent prior to trying to rent a boat for the day. 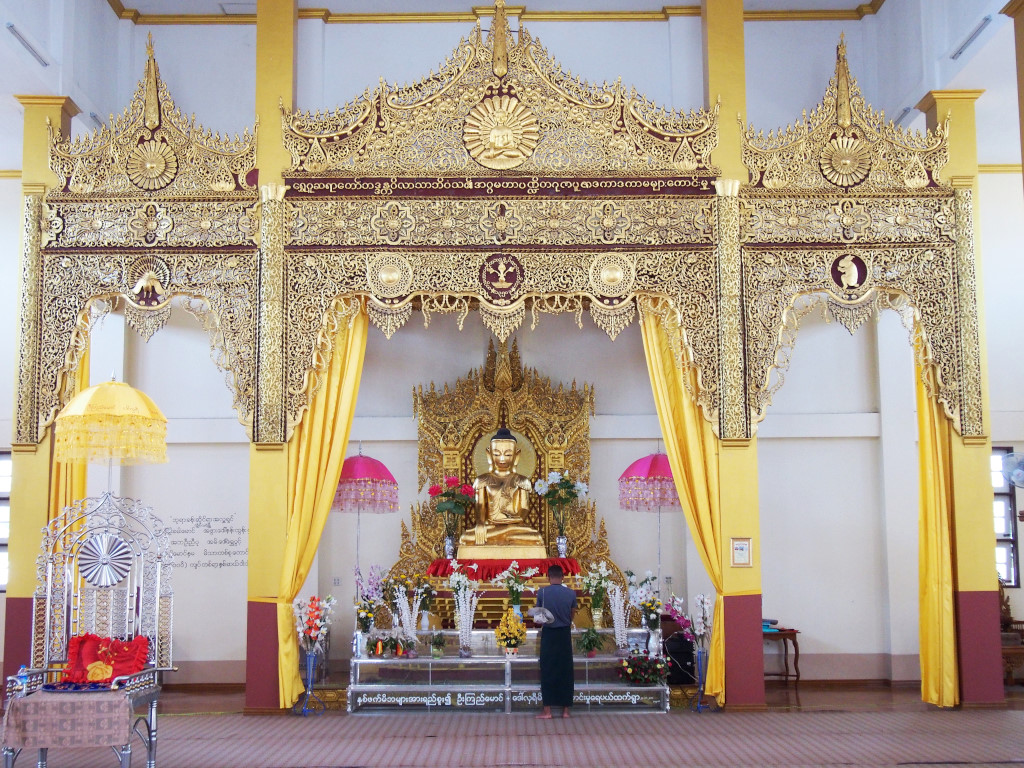 All I can deal with at this point is to return the bicycle and clamber back to the hotel, looking for the familiar landmarks to guide me to the access road. Arriving at the hotel shortly after 9 pm, the gate is already shut and the hotel seemingly empty, all windows darkened. For that matter, Nyaungshwe feels largely abandoned, which may not be the worst thing in the world for the Water Festival.
Late at night, the internet that normally improves in quality begins dropping off, the connection to the local routers excellent but there being no service in the background. It occurs to me that they may literally stop internet service during the Water Festival, which seems absurd, if it weren’t just another reflection of the country’s desire to profit from tourism as much as it fails to understand what is actually required to sustain tourism.