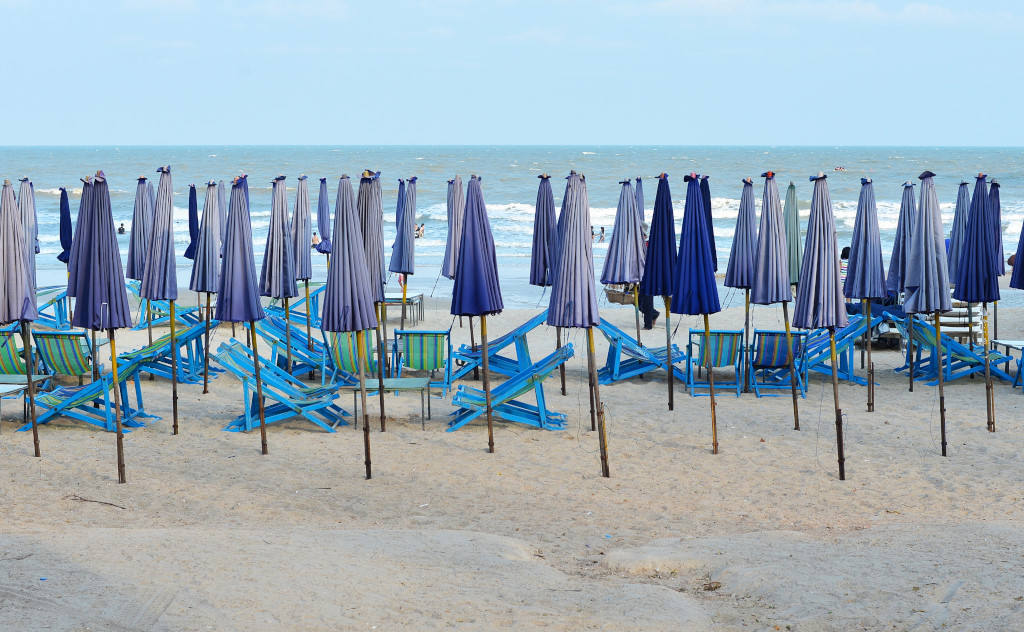 I linger in my room at the 2N guesthouse, since I am not particularly motivated to rush off quie yet to Cha-Am further to the south. I have some personal business to transact in addition to wanting to write a little in my journal. Time flies when you have good air conditioning, but by the time noon rolls around, I really have to vacate the room. Of course, I will also be leaving the town of Petchaburi with quite positive sentiments.

Once downstairs, I keep the OCD owner from her washing with another one of my laudatory tirades, only allowing her to return to her work when I get the young German couple from Mainz into my clutches, then finally, the owner’s sister drives me to the bus station.

My personal possessions are flung into the rickety old vehicle, my sweaty body planted onto one of the seats, just outside the path of the jet of air emanating from the overhead fan, much to the consternation of the older Moslem woman sitting next to me. Then the elongated sugar-coated savory crackers I bought at the market yesterday evening won’t cool me down, but they do taste good! 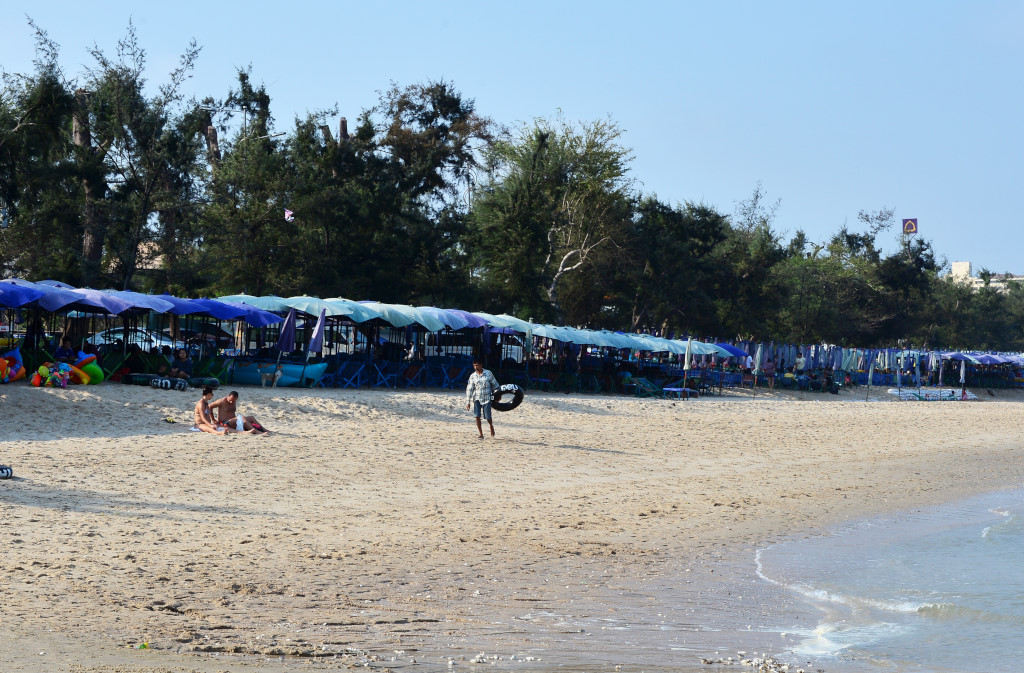 The drive from Phetchaburi to Cha-Am is perhaps half an hour and the distance some 30 or 40 kilometres, but the bulk of the scenery we pass through amounts to urban sprawl, small- to mid-scale commercial, industrial and retail, nothing remotely memorable, a few incongruous resorts sandwiched in amongst the rest of the amorphous extra-urban environment, as well as the occasional patches of agriculture.

Given that we are descending into a region defined by beach tourism, I ask myself how much of this commercial development exists to service the tourist industry. I had been forewarned that the bus only stops at one place in Cha-Am, and as the bus rambles through the extensive sprawl surrounding what I take to be Cha-Am, I imagine I will be paying a lot in taxi fares, or walking a considerable distance in the extreme heat. 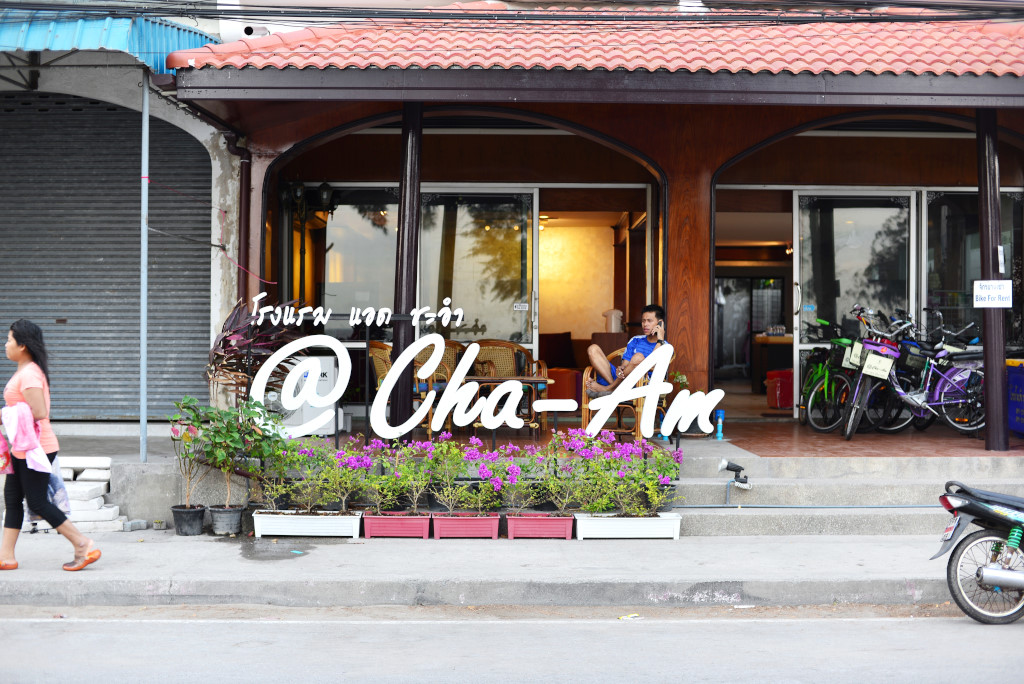 Having disembarked at the intended stop, the motorcycle taxi drivers make a half-hearted effort at commandeering my business, although I really don’t see how they could safely drive me anywhere, what with my two very heavy backpacks. But the rough map that I scrawled on a piece of paper prior to leaving Phetchaburi indicates that my hotel is at the base Narathip Alley – and the sign on the adjacent street indicates precisely that name. Could it hurt to walk the allegedly two kilometres toward the beach and see what happens?

My luck prevails, as usual, except that I would really like to stop off for a coffee somewhere, against my better judgement, the first suitable place appearing to be a fusion of cafe and burger joint, entirely empty except for a British tough and his younger Thai female companion. Polite chatter ensues, then they leave: incorrectly rationalizing that the food must be decent if the two ate here, I have one of the worst hamburgers ever, an even worse decision, considering how much acceptable and very inexpensive street food is available in this country, and no less here, as I will soon see. 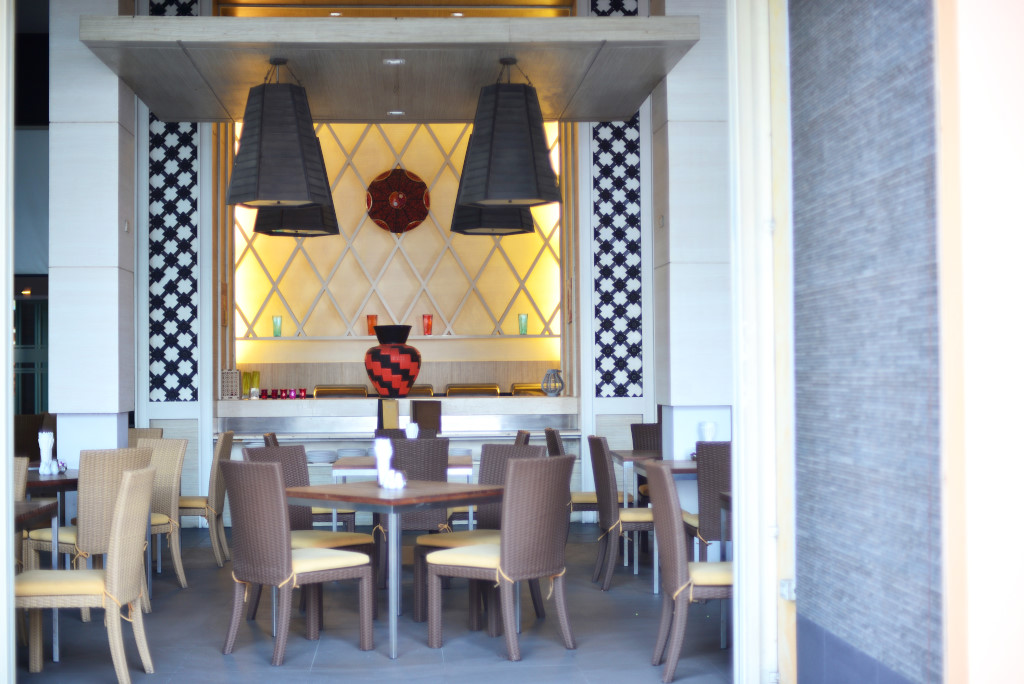 I meander slowly along the road that apparently leads to the beach, not particularly motivated to get anywhere very quickly, enjoying the passage through the inconsequential retail. Eventually I reach the road running along the beach and the green-blue waters screened behind the line of casuarina trees. Nothing looks any more impressive than what I passed on the way down, only a concentration of retail and weathered Chinese-style hotels, crammed alongside generic and overpriced Thai eateries into narrow alleys running off to the side.

From an urban design perspective, the town looks utterly generic. Considering the number of very mediocre-looking hotels I pass by while looking for the Cha-Am Guesthouse, I find it difficult to fathom the high prices of accommodation I encountered on Tripadvisor. Perhaps the bulk of accommodation here isn’t even listed on Tripadvisor, as it caters to local tourists? 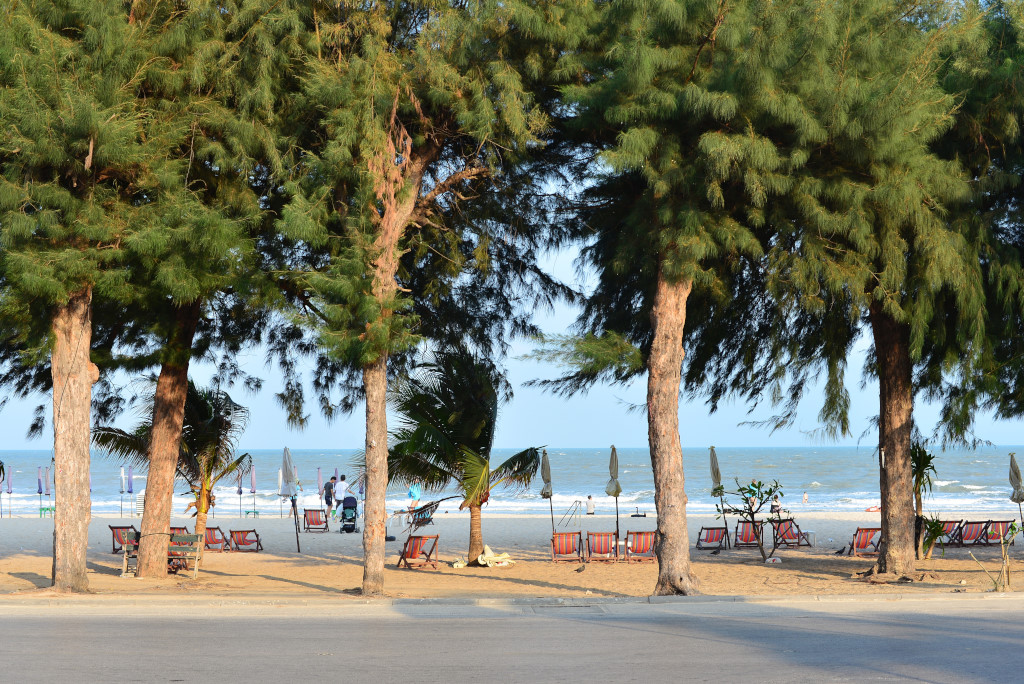 My own hotel is located a short distance in from the beach road, not far from Narathip that I descended to get here, very much the same as its compatriots, although decidedly cheaper than anything I could find on Tripadvisor. The lobby is new, and the room not even vaguely memorable, although in no way terrible, the queen-sized bed squeezed into one corner of the characterless room, which also contains a large chest, hutch, television, fridge, a decent bathroom and very functional AC. For $20 a night and a few steps from the beach, I really can’t complain.

Given that Cha-Am pretends to be a beach resort, I should at least make an attempt to get to the beach today. Down the back alley, through the casuarina screen and onto the beach, tracking through the grainy brown sand to the waterline, I pass by Thai families and groups of friends playing along the shoreline, and to a lesser extent, in the shallows of the water itself. Very few westerners are visible on this long, straight and narrow beach, running from the small promontory and breakwater up ahead to the towers far in the distance to the south. 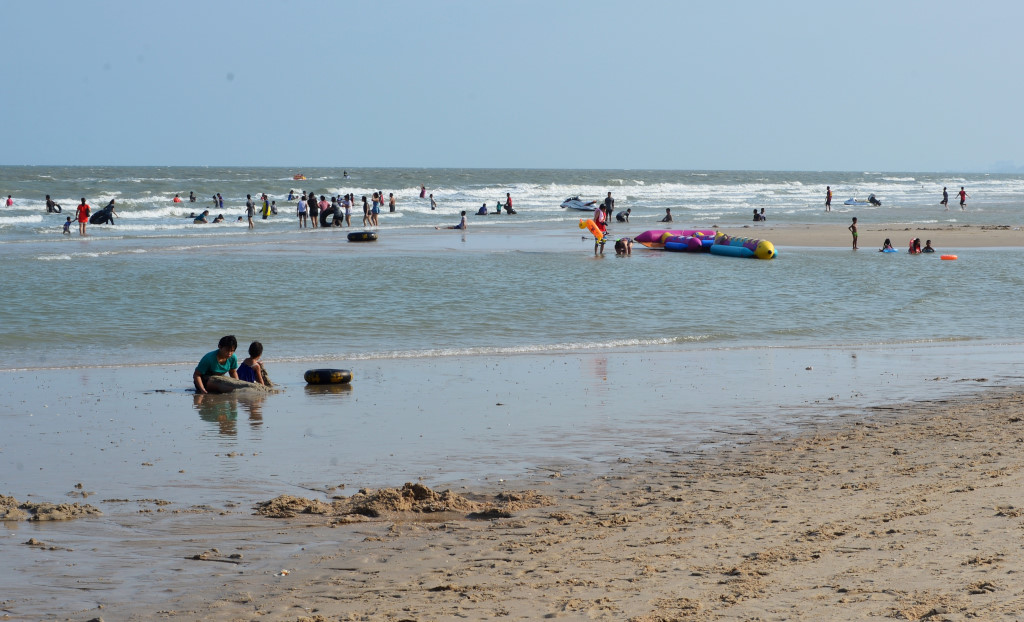 And as far as the eye can see, the narrow strip of sand is largely occluded by a wall of beach umbrellas, implying the potential for torrents of people, definitely not present at the moment. A few jet skis and sea-doos race in the water close to the beach, pulling large inflatables carrying visitors for a quick waterborne tour of the area. Virtually all Thais enter the water fully clad. They may get down to shorts and T-shirt, but skimpy bathing suits are totally out of the question here.

Not much of interest seems to be transpiring on the beach, other than several individuals volunteering to be buried under a hill of sand. I wouldn’t mind going for a quick swim, but given the utter lack of privacy, I would not even consider leaving my backpack on the beach with all my personal possessions. 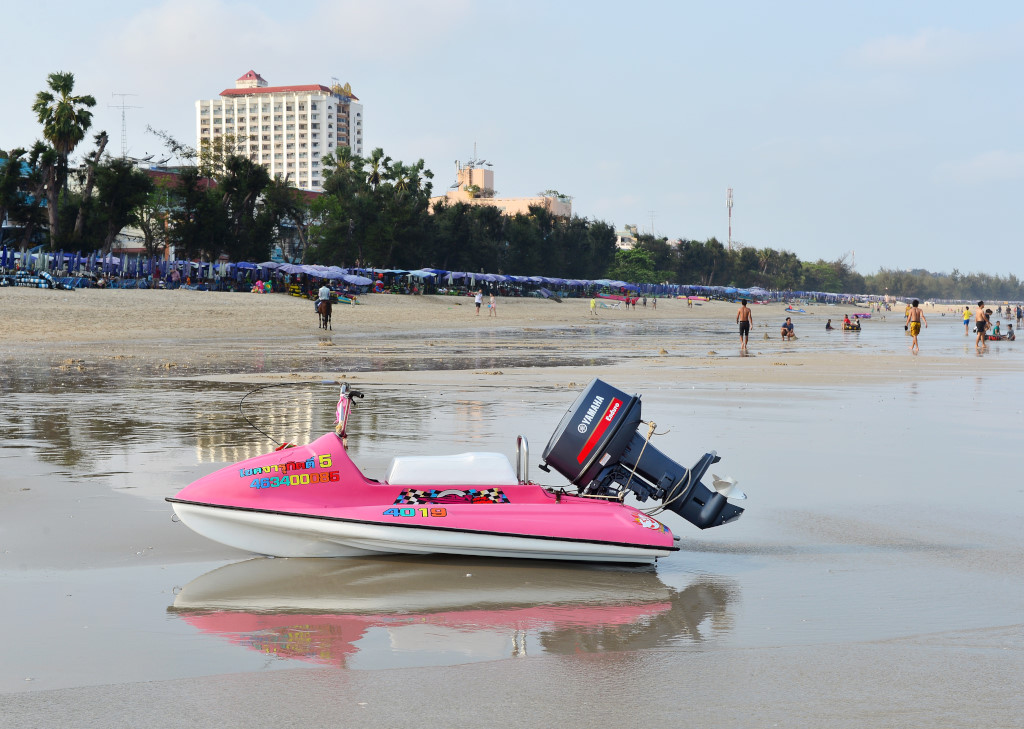 Returning to the road running along the beach, a long trek southward towards the area of the hotel greets me. Very little of the storefronts reflect anything memorable, just the usual budget hotels, a few surprising attempts at luxurious resorts, a few fancy and overpriced restaurants, generic eateries, and really not much else.

The town is definitely nothing to write home about, be it the waterfront itself, or the residential structures facing the water. So wherein lies the rationale for the high cost of accommodation in Cha-Am? If it were half the price, I could understand – but the place reeks of mediocrity.

In defense of Cha-Am, the target clientele is refreshingly and rewardingly Thai, placid, pleasant, modest, and somewhat warm, and there is no more apt reflection of the Thai nature of town than the endless amount of outdoor eateries that line the streets, perhaps no more so than anywhere else in Thailand, but once habituated to the country, you just can’t keep away. 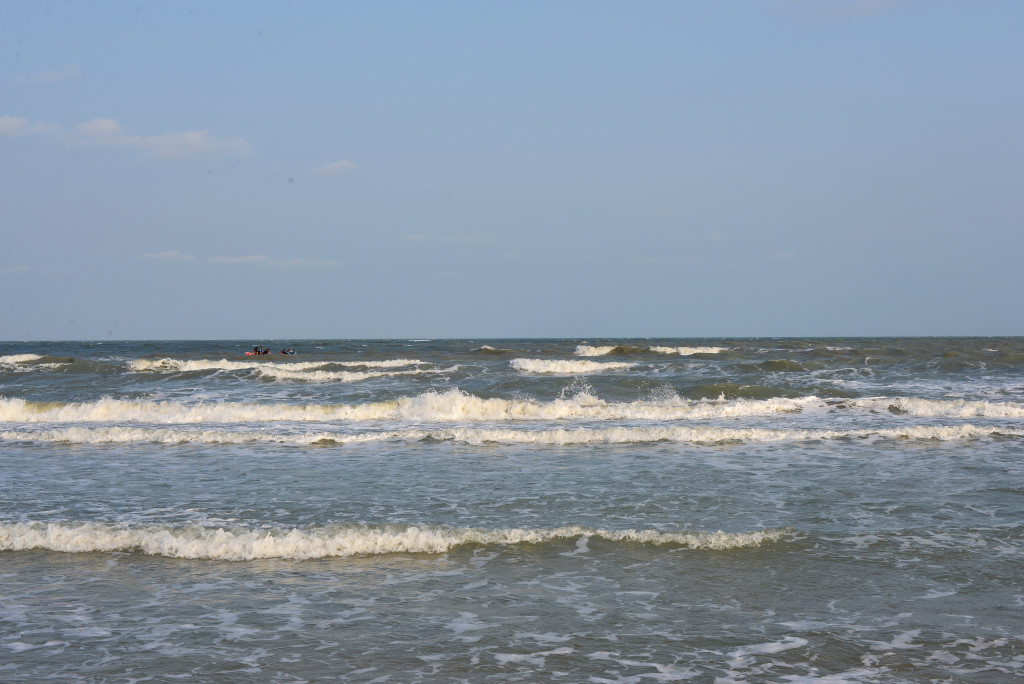 This afternoon, it’s the ice cream vendors that hold me sway, everyone in the business seeming to offer either coconut, taro, chocolate, or cendol, the quality relatively mediocre, but the contact with the vendors refreshing. And the realities of these humble locals attempting to make a living drives home the distorted economics of the place, that many if not most locals are not remotely in the league of being able to afford the innumerable carrots that are dangled before visitors. Many sell the typical surimi and sausage products (that will never stand out on any culinary horizon) alongside dried seafood products that I am instinctively repelled by, the various coconut and rice flour-based sweets the Phetchaburi region is known for, and the grilled chicken, pork and seafood satays.

Wandering from the street onto the promontory I saw from the water earlier on, I enter into what must be one of the primary attractions in this town, three interconnected rows of almost exclusively seafood eateries, the interleaving plaza laid out with a dense grid of yellow folding tables and chairs, few of which are occupied. I am assuming that later on in the evening there will be far more people, because at the moment there is little business. 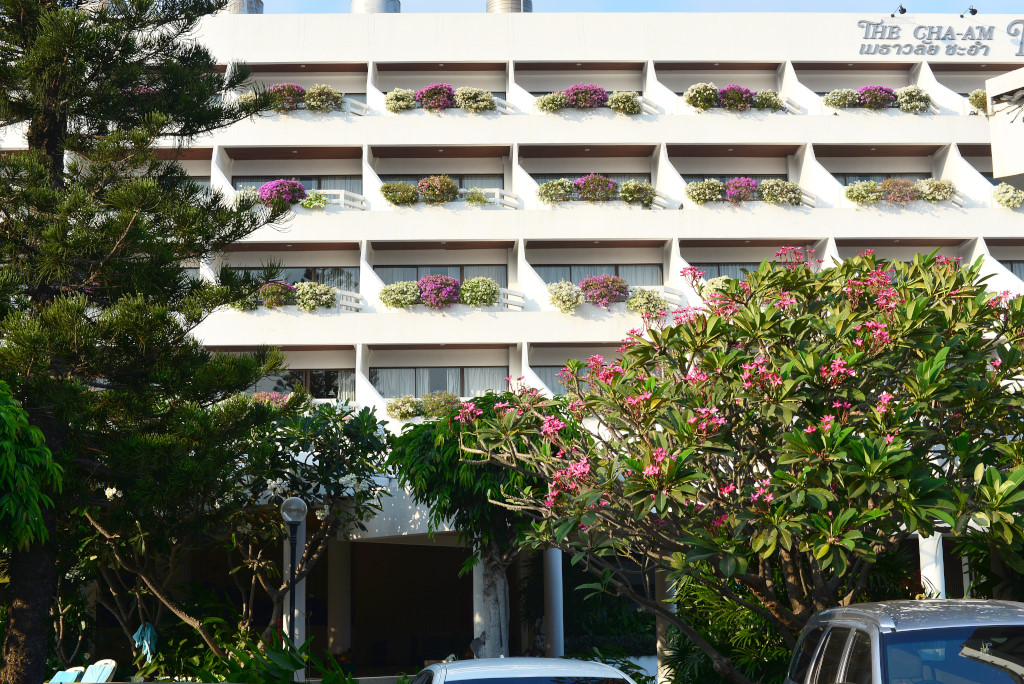 The vendors present a veritable extravaganza of Thai seafood, including grilled cuttlefish, squid, shrimp, also in salad form, deep-fried sprats, in addition to roe of various sorts, grilled crab, crayfish, prawn, lobster and fish, with prices probably as low as would be found anywhere in the country for seafood. As frugal as I try being, there would be no better place to try out some of the local specialties, making an exception from the usual starch-focused and much less expensive culinary options.

As dusk sets in, musicians on the raised stage set against the water’s edge test their instruments, the notes echoing across the plaza, the upcoming concert engaging in theory, but not if I have to spend longer here than it takes to finish the steamed cockle and squid salad.

Looking for a store that sells alcohol, I am advised to go to the 7-11 – I never thought of visiting a 7-11 to buy rum, but I guess Canada is not Thailand in that respect. I am surprised that a small mickey of rum sells for almost $6 (half a day’s wage in this country), a testimony to how overpriced basic commodities are relative to most peoples’ income. 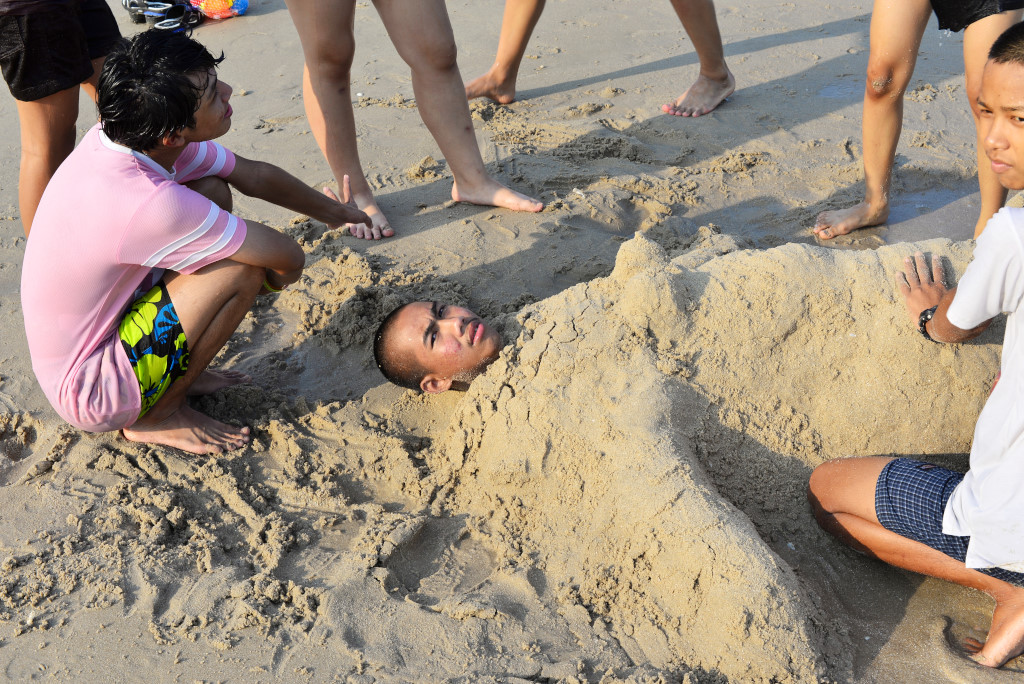 Into the alley along which the Cha-Am Guesthouse is located, the figures of the few male patrons and plethora of typically younger local women beckon from the darkly lit establishments that line the street. The Englishman I spoke with earlier emerges from one of the farther establishment at the end of the mirroring lane, confirming that indeed the country is very expensive for the average person’s means – and for that matter, doesn’t make much sense as a budget travel destination.

He used to have a bar in Pattaya, then decided to move to Cha-Am. As far as he is concerned, anywhere is better than Pattaya. Cha-Am is less expensive, the beach is at least clean, and it has a down-to-earth feeling. I have to reserve my judgement, as I know far too little about this country.

The bars fill up later on in the evening and the place is apparently jam-packed on weekends, although for better or for worse, I won’t be here then.

It is actually fortuitous that I am located in the effective centre of town, if you could even claim that the town has much of a centre. 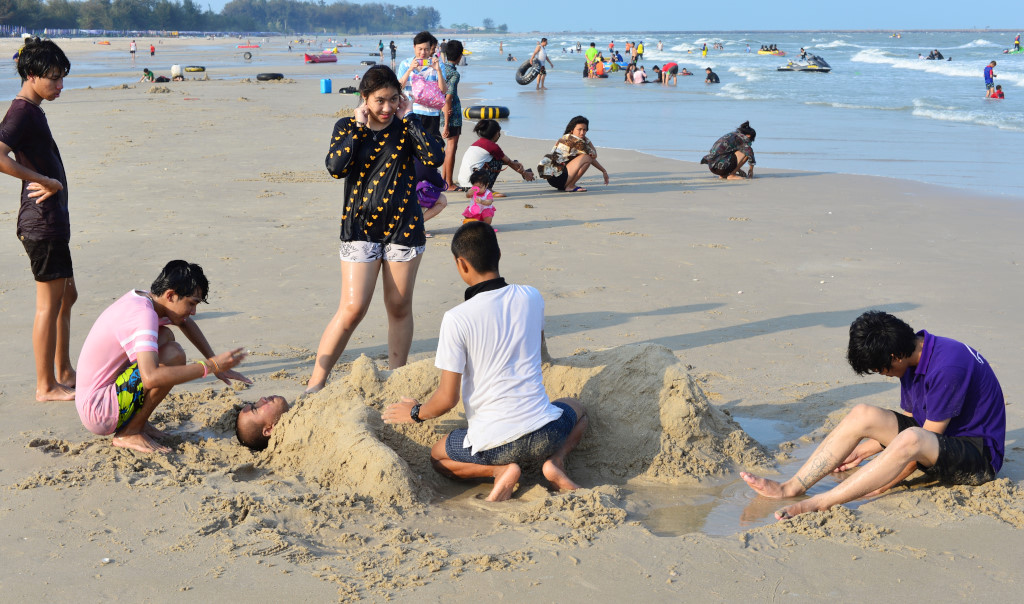 I see many foreign tourists on the street, mostly older Europeans, and judging from the references to Scandinavia on the restaurant signs, I take it that many of the visitors come from that region. A healthy number of the older men wander through the streets with local women a fraction of their age – it’s difficult not to draw very demeaning conclusions at this ubiquitous sight in the country.
Thailand really sells itself very cheaply, and very much to its detriment. It is difficult not to be nauseated by the presence of this kind of tourism in Thailand, especially considering the manner in which prostitution is so thoroughly and pervasively directed to the captive audience of western social detritus.

I had a premonition that Cha-Am could be very mediocre, but it is even more so than I expected. I had taken a risk by only booking several nights at the hotel, thinking there was a possibility that I may fall in love with the place and want to stay much longer, but even the shortest visit to the town convinces me that there is no chance of that happening.