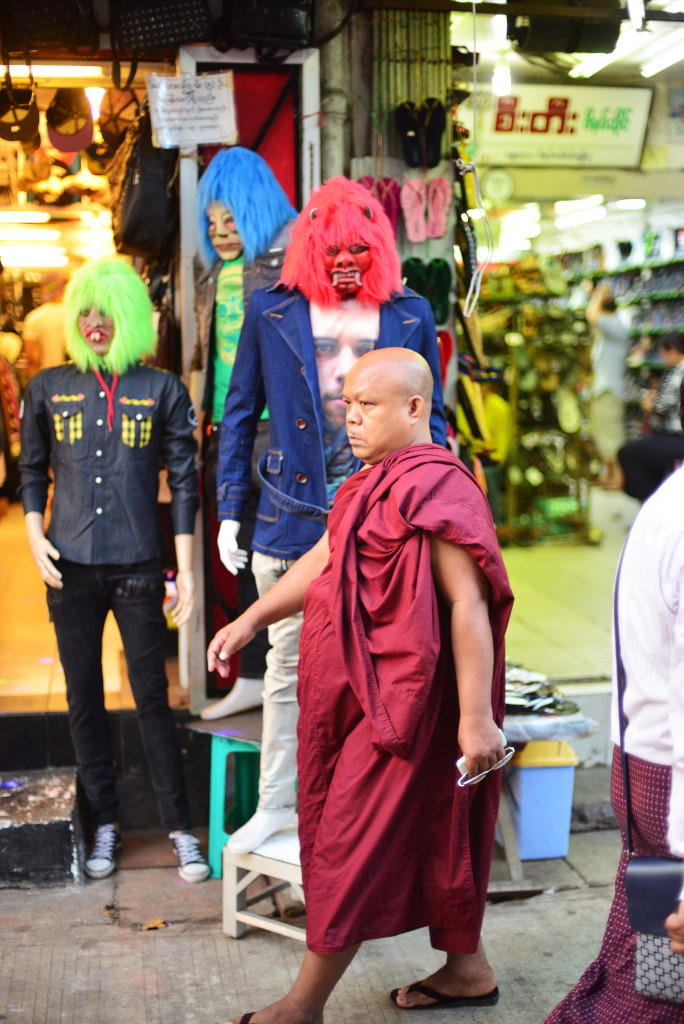 From the earliest hours of the morning, the hostel staff tramps back and forth, chattering loudly as they traverse the passage from the staff room to the eating area: sleep is impossible here. Breakfast is commendable, eggs sunny-side up, served on a bed of imaginatively fried rice, accompanied by some bananas and sugary orange drink. Long after I leave the table, the chattering ‘I went to Mandalay, then Inlay Lake, then Bagan’ continues. 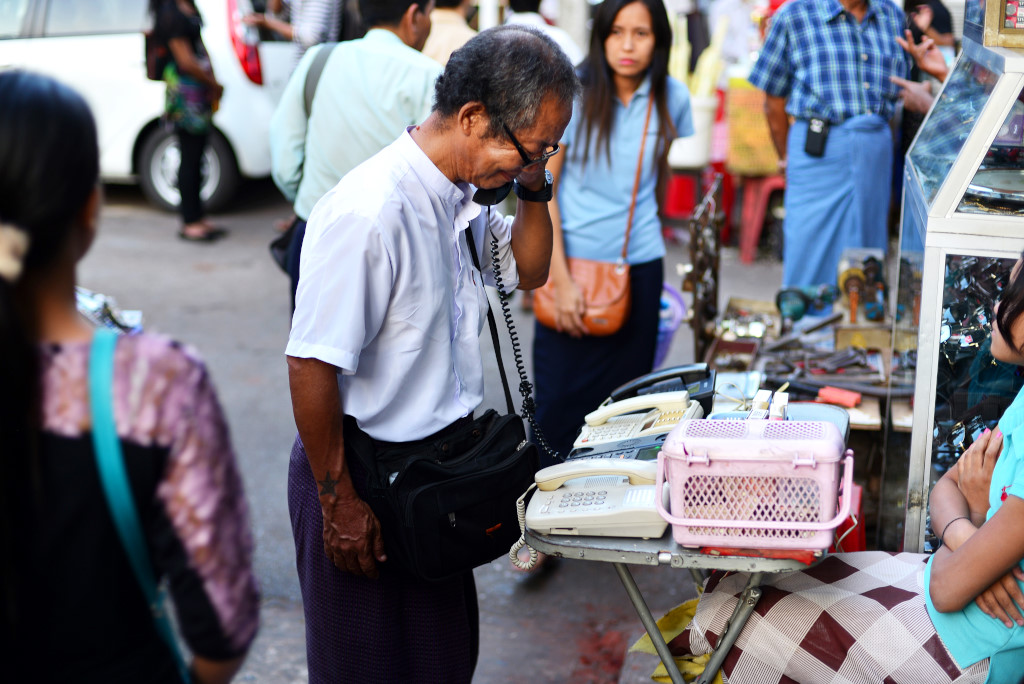 The side of the entire length of the side street emanating from Maha Bandoola where the Chan Myaye guesthouse is located has been dug up. Laborers dig into the turgid muck from early in the morning into the evening to install upgraded sewage infrastructure, the same work affecting much of the inner city at the moment. 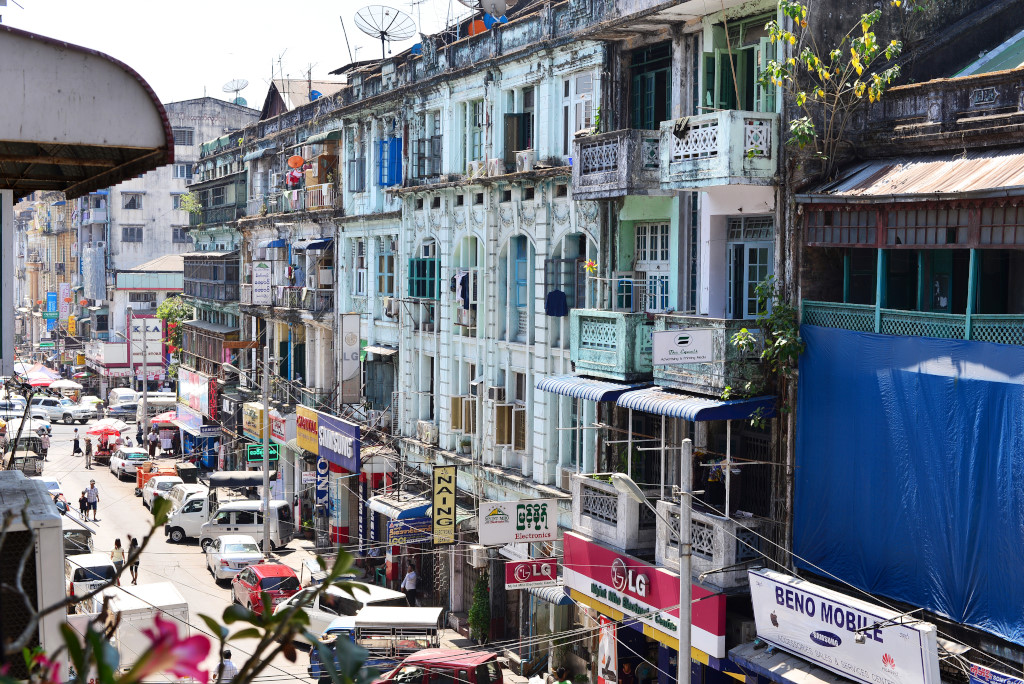 A plank crosses the rubble-strewn ditch to the ‘Bar and Bar’ establishment, a name that makes little sense. The older lungyi-wrapped Indian man at the entrance confirms that the name of the bar is correct. But when you are drunk, the word ‘Bar’ will then appear in quadruple!

He is not quite sure he understands or sees this as a problem. He invites me to come inside and have a drink with him. He comes here every day around 11 am or noon. If and when I return to Yangon, I should stay at the Chan Myaye and come and visit with him at the bar. 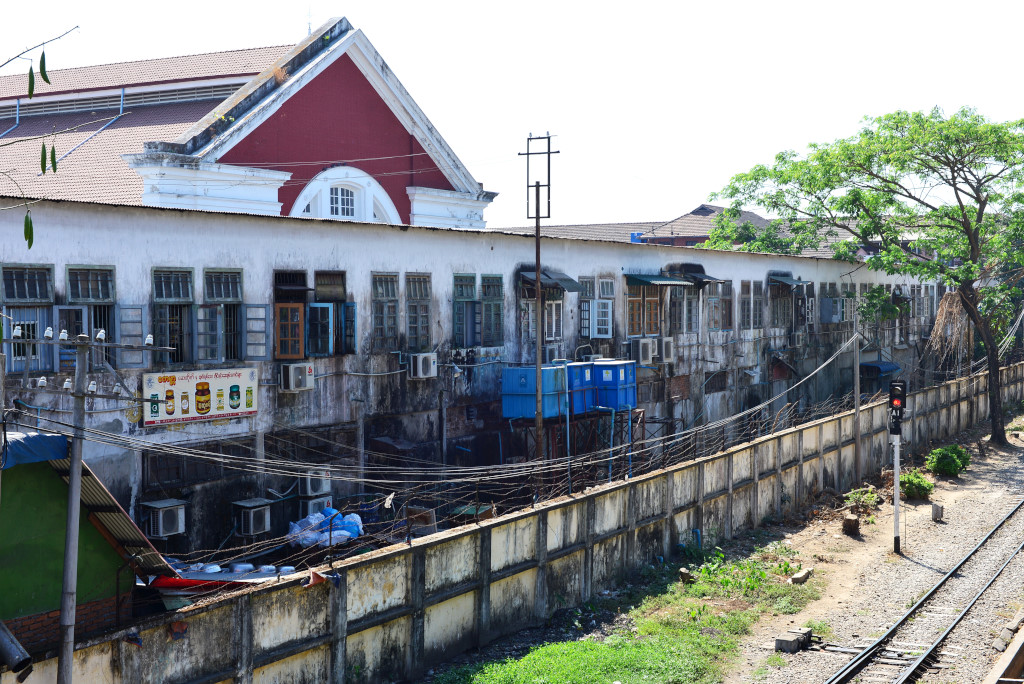 Joey owned a business for much of his life in Yangon, but is now retired. Like many Burmese, he hates his government, and does not trust the Chinese involved in the country who are driven by nothing but money. The Burmese people are so innocent, and yes, so much money has come into the country, but most people have not benefited.

He encourages me to take the train that runs the circuit of central Yangon, which would be a good idea if I was here for a longer period of time. Speaking with him reminds me of arriving in Rangoon 18 years ago and stumbling into the hands of a group of radically-charged reporters in a small bar near the Strand hotel. 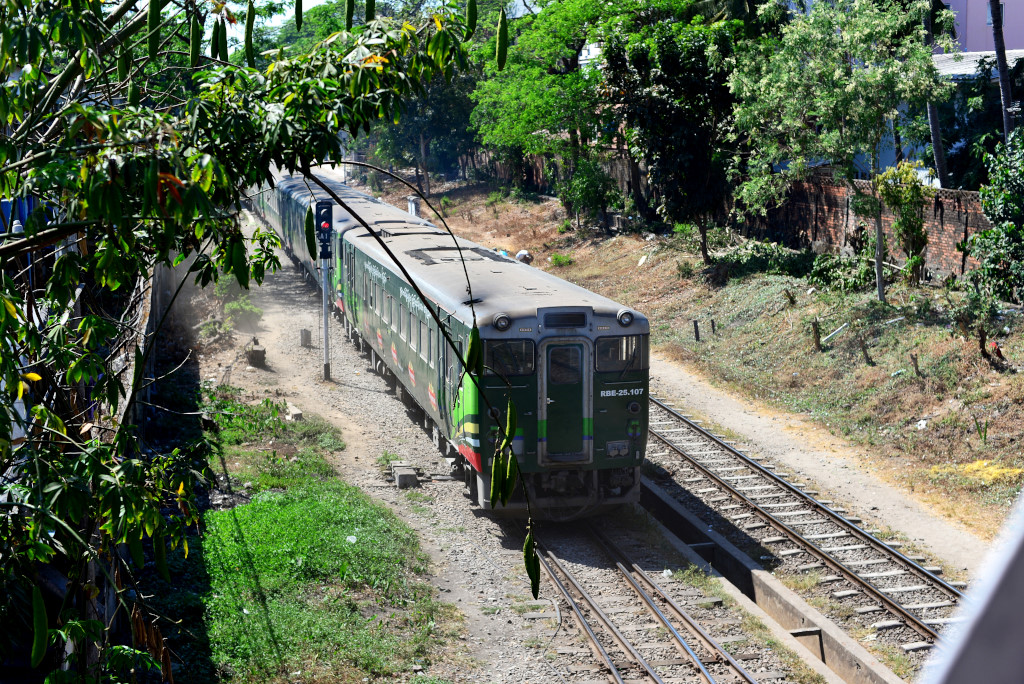 The bearded young American seated at one of the tables adjoining the samosa and deep-fried roll stand quips that the pastries tasted good to him yesterday and hence I should probably enjoy eating them today. At 2,500 kyat, the large-sized pastries aren’t particularly cheap, and greasy to boot. But that hardly keeps me away from some of my favorite food … 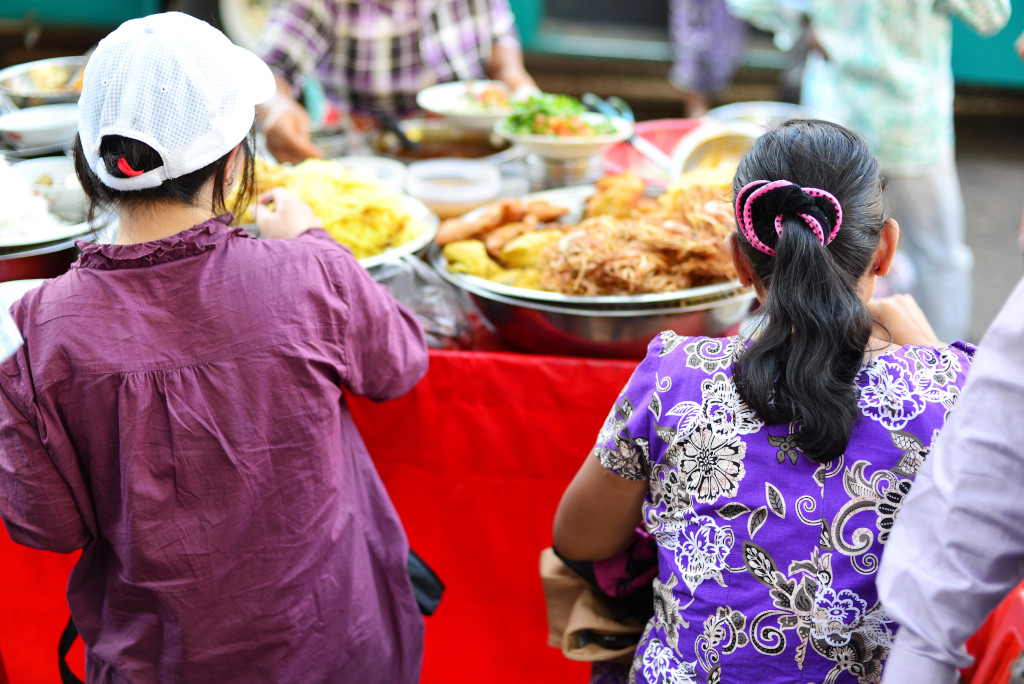 I don’t quite fit into the typical composition of people heading to the Sky Bar on the 20th floor of the adjoining office tower. The Sky Bar is not a coffee shop so much as an all-around basic restaurant in a somewhat glamorous setting, intended to impress, but falling well short of the mark. Greasy flakes from my samosa fall all over the floor as I chat with the staff, hardly the image of the kind of client the establishment wishes to attract. 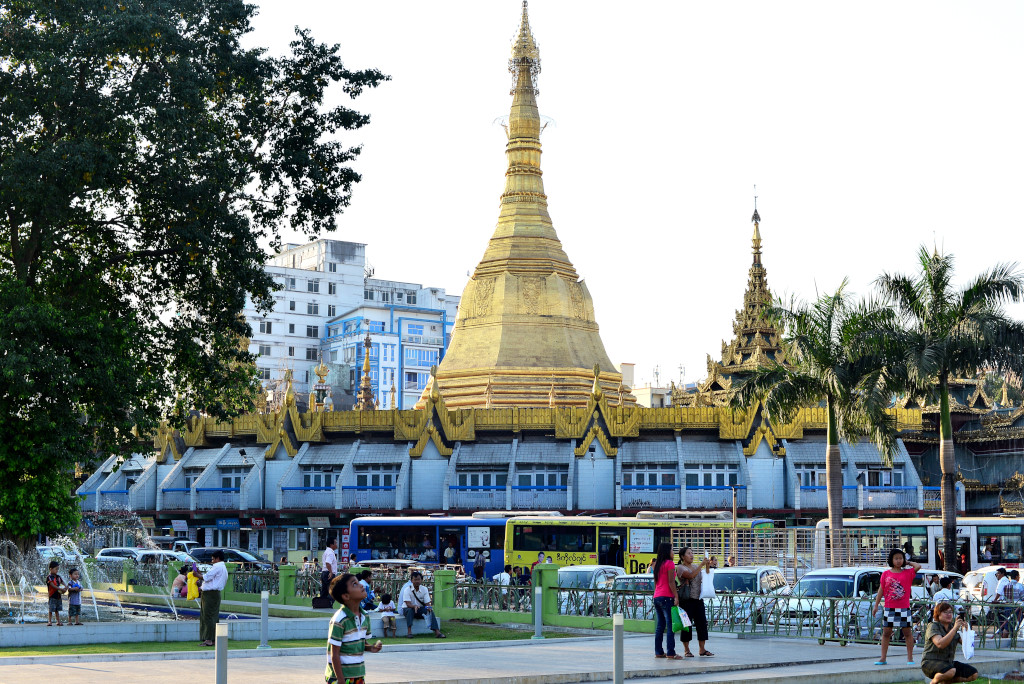 Happily for them, I leave, and a short hop later cross the street to the FMI tower, the first establishment on the mezzanine the Cafe Boon, replete with western contract workers and NGO staff imbibing in the delights of the western culinary imagination, drawing on a much more ample pocketbook than the average Burmese can ever imagine possessing. 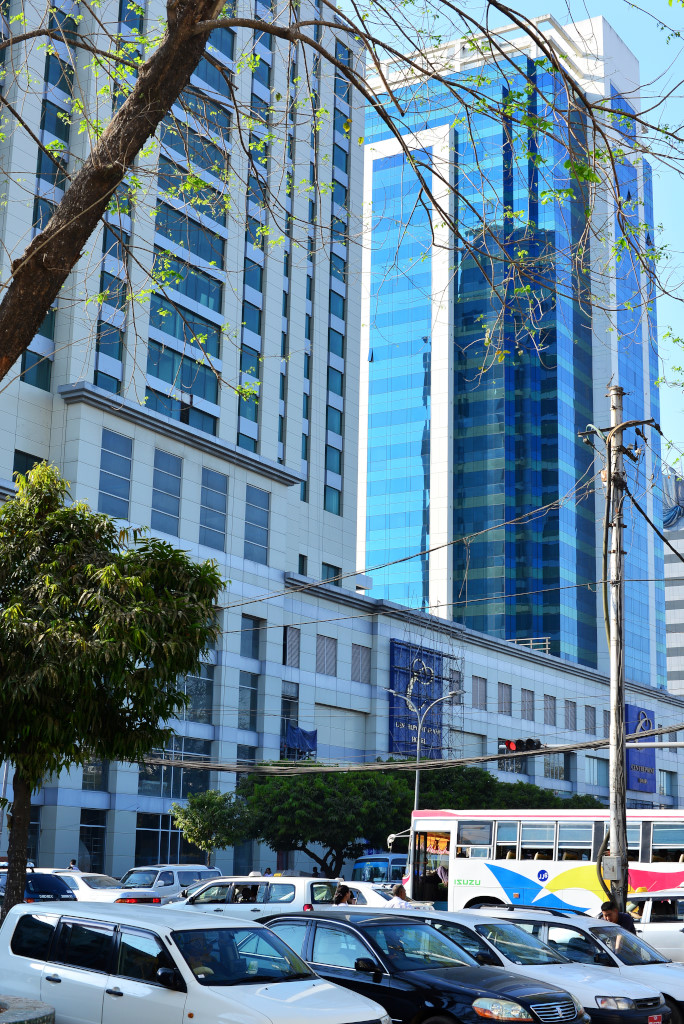 Seated by the wall, I look over to the redhead sitting next to me, convinced she must be Australian. Or English? Yorkshire it is, my ears sparking up when she tells me she was working on a project for Oxfam.

The ideas come in fits and starts, initially noncommittal, but increasingly pessimistic about the state of the country, the changes in government nothing but cosmetic, and the big money that is being transacted here only landing in the hands of government cronies. No one can own any land, as it is all on lease from the government, and it can be taken from you whenever the government feels like it. You couldn’t possibly have made it here without being attached to senior members of the government or military. 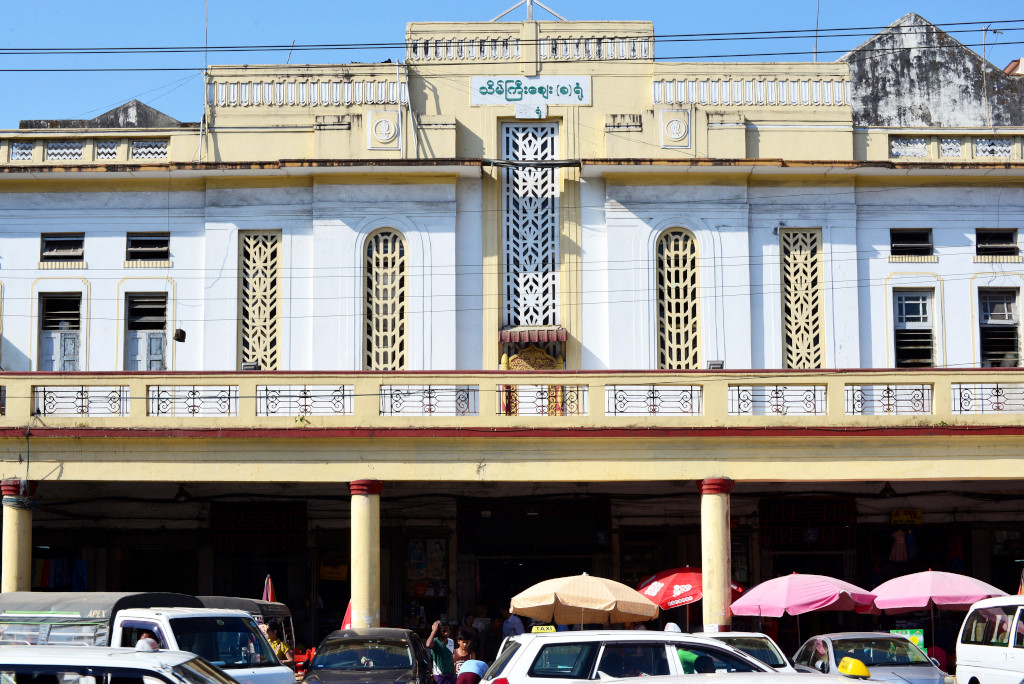 It seems somewhat incongruous to be talking about this subject matter, given the largely foreign clientele in this California-style bistro paying western prices for their healthy and imaginatively-prepared culinary treats. The least I can do to indulge in this consumeristic epiphany is buy some T-shirts on the street with stylized images of Bogyoke Aung San and his daughter emblazoned on the front, although I think the vendors are a far cry from the clientele or owners of the establishment I just departed from. 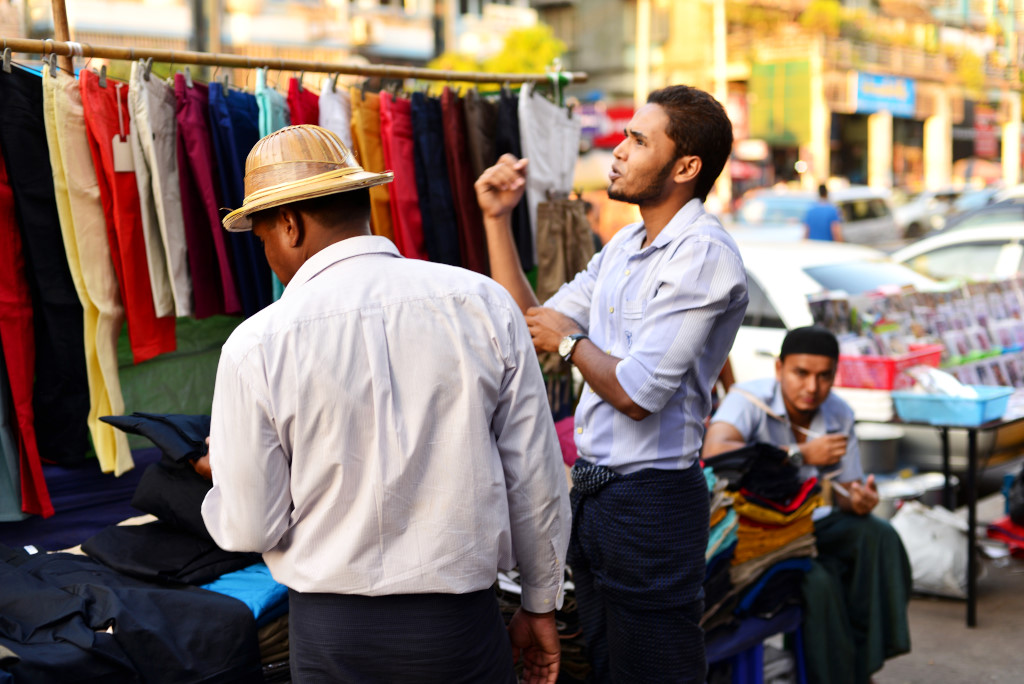 As I wander through the craft shops along the Bogyoke Aung San road, I realize I have reached the eponymous craft market touted as one of the main tourist attractions of the city. The market is loosely arranged into different sections, each dedicated to fabric, wood carvings, cast bronze statues and religious objects, puppets, precious stones, and so on. 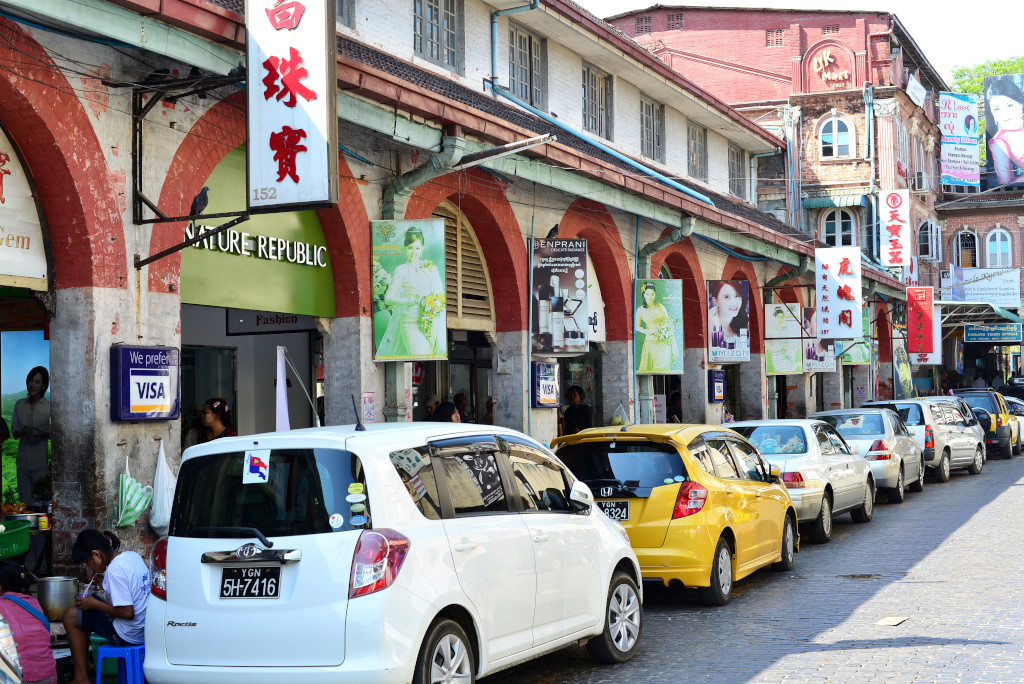 A common fabric item is the lungyi, many on display with colourful geometric patterning and spiraling embroidery the local women favour, although I am loath to attempt to understand how much of the material would be Kachin or pertain to any of the other Myanmar tribal peoples, if at all. It would seem important in assessing the fabric’s value to ascertain whether the work is machine- or handmade, what it is made of, and what its cultural provenance is. 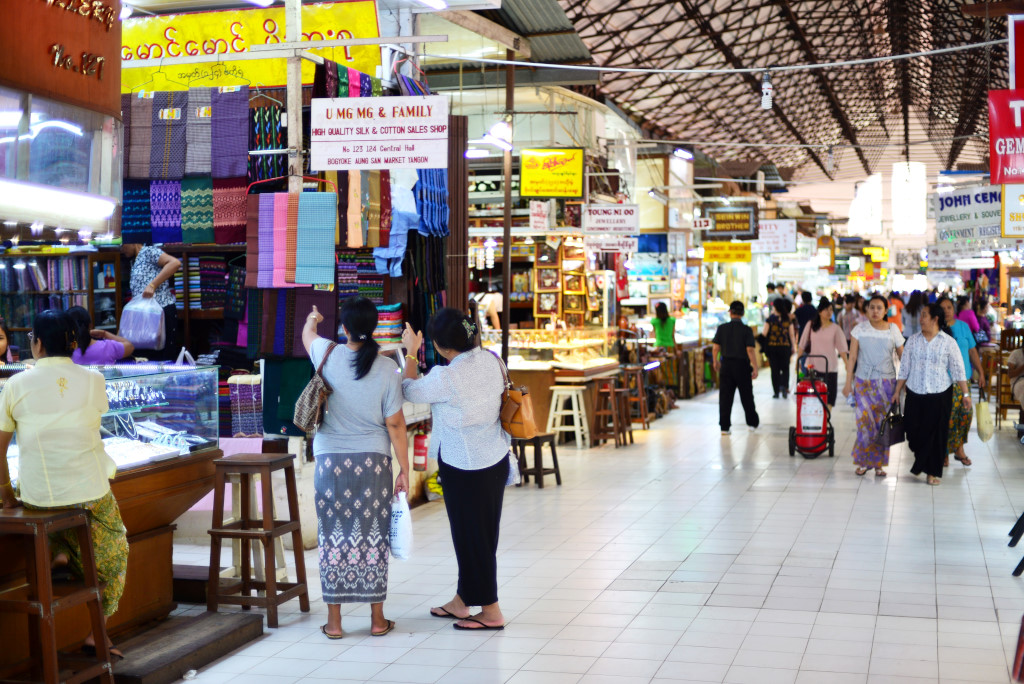 And then it would be up to the vendors to be honest about answering these questions, which is normally not a given in these types of environments, although the Burmese will probably be some of the most honest people in Southeast Asia. There is some hustling from vendors, but it comes mostly from the small pod of food vendors, who push their overpriced plum sweets and juices to unsuspecting tourists. 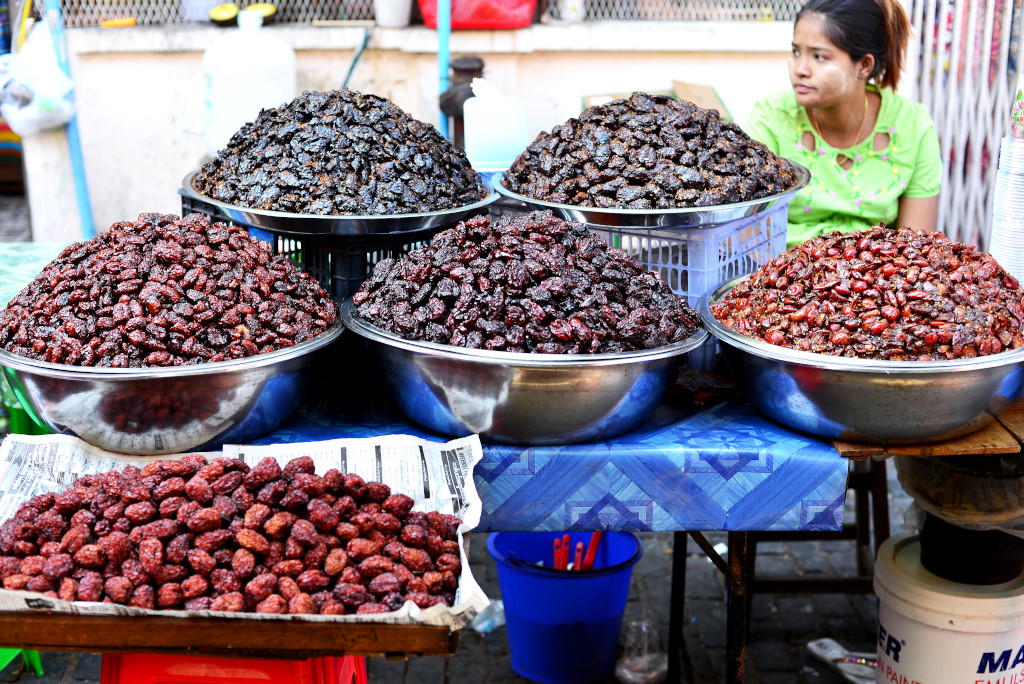 Large sections of the market are bathed in darkness. If this is an ongoing problem, I can’t for the life of me imagine these people to be paying the same amount for rent for their stalls. Relatively few western tourists are present, most of the visitors coming from other Asian countries. 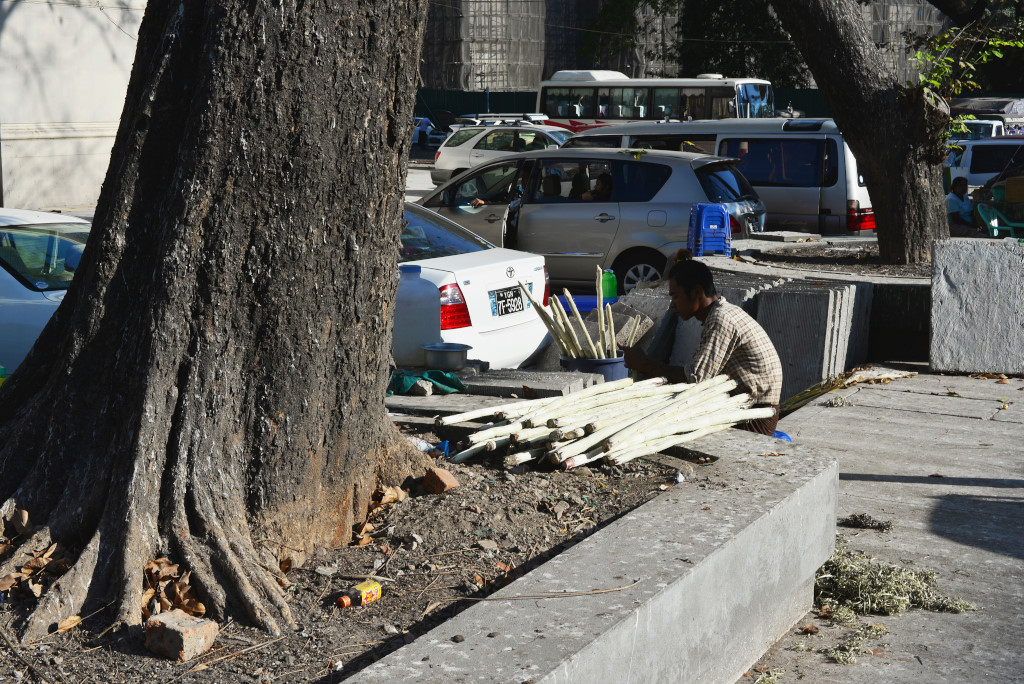 The only items I could even consider purchasing would be fabrics and jewelry, although the fabrics are not remotely as interesting as ones I have acquired in other countries, and jewelry is of little interest to me – and expensive. On one hand, I have some extra Myanmar kyat to spent, but on the other, my backpacks no longer have any space left, and I can’t imagine hauling even more stuff I don’t feel particularly passionate about. 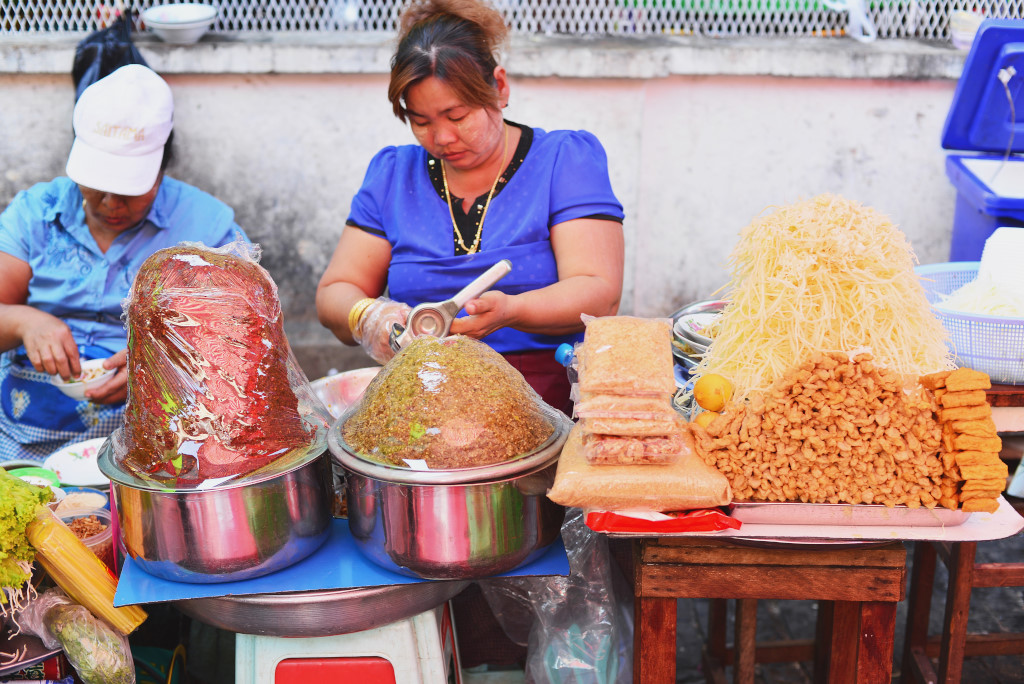 There is one stand with basic Chin and Naga jewelry and weaving, although hardly very interesting compared with the artifacts I acquired in the country 20 years ago. The market extends to the train tracks, a few vendors selling food items on the bridge crossing, a man with a prosthetic leg prostrating himself dramatically before every person who passes by. I have not seen beggars anywhere else in the country, although tourist spots are always ideal, not to romanticize the plight of the disenfranchised in this country. 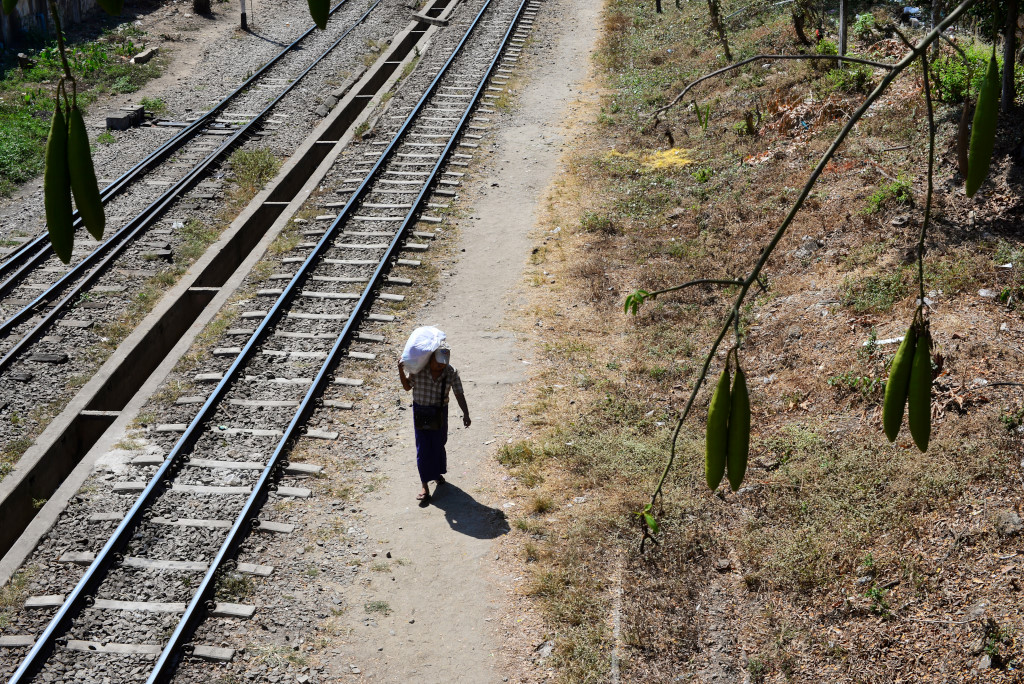 Below the market, the real world beckons, the grid of streets that comprise old Yangon beholden to buildings containing multiple levels of wholesale and retail markets selling fabrics, dried rice and pulses, one building upon the other, overpasses joining various buildings providing some escape from the chaos of vehicles and vendors lining the sidewalks. The ubiquitous construction work makes the streets even more anarchic, creating an absolute headache to navigate. 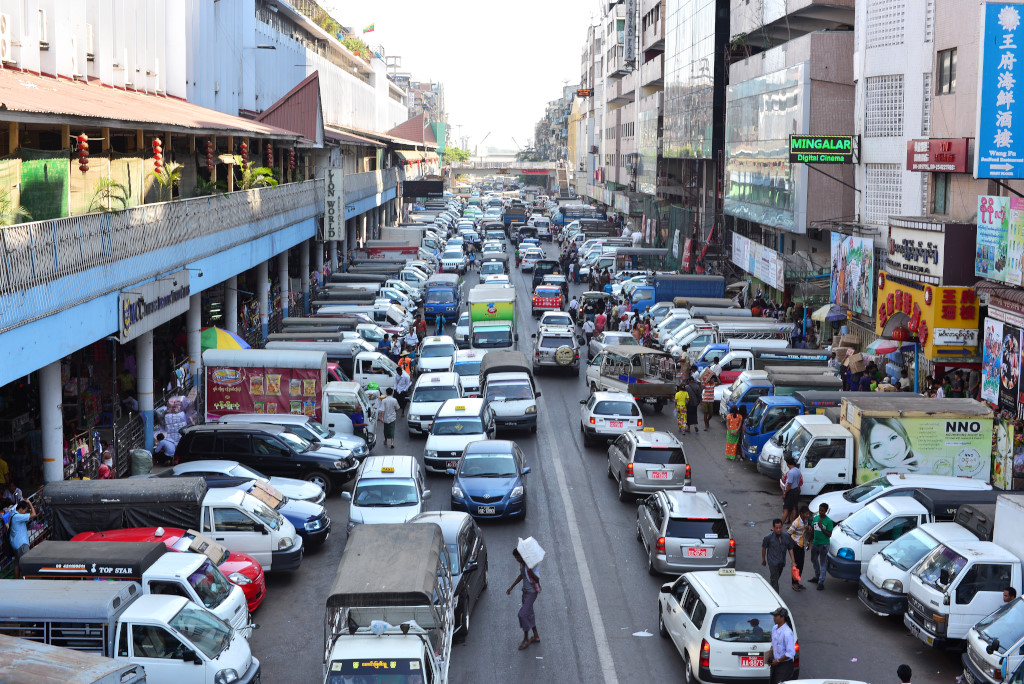 Offered for sale are simple clothing items, shoes, cell phone covers, orange, black jelly, pineapple and watermelon drinks, parathas, Indian pan, sweet-potato-like tubers, samosas, surimi skewers, and much else, pedestrians who wish to proceed at any speed forced to walk on the street. The area feels very Indian in its concentration and chaotic feeling, although of course it is, the people on the street an even mix of ethnic Burmese and Indians, the Indian focus of the area gaining even greater traction in the side alleys. 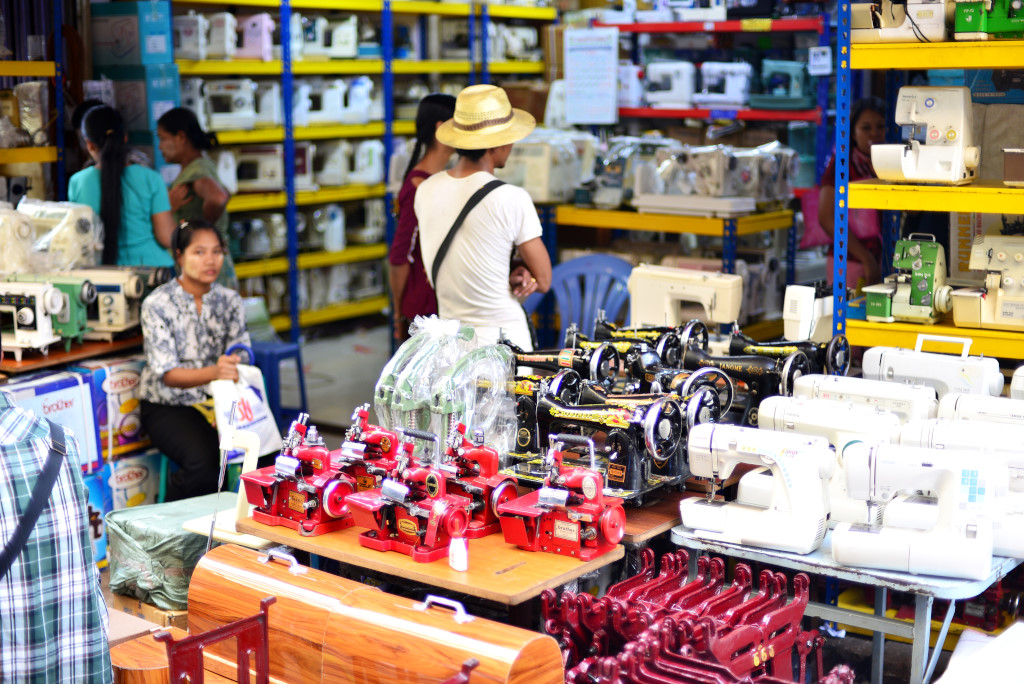 The immediate area around Maha Bandoola park is incongruous with respect to the rest of the centre, clean and proper, the architecture resplendently English colonial, many of the buildings recently restored. It seems the largest structure flanking the park may be the city hall, taking on somewhat more of the Neo-Saracenic Victorian style so typical for the Raj in India. 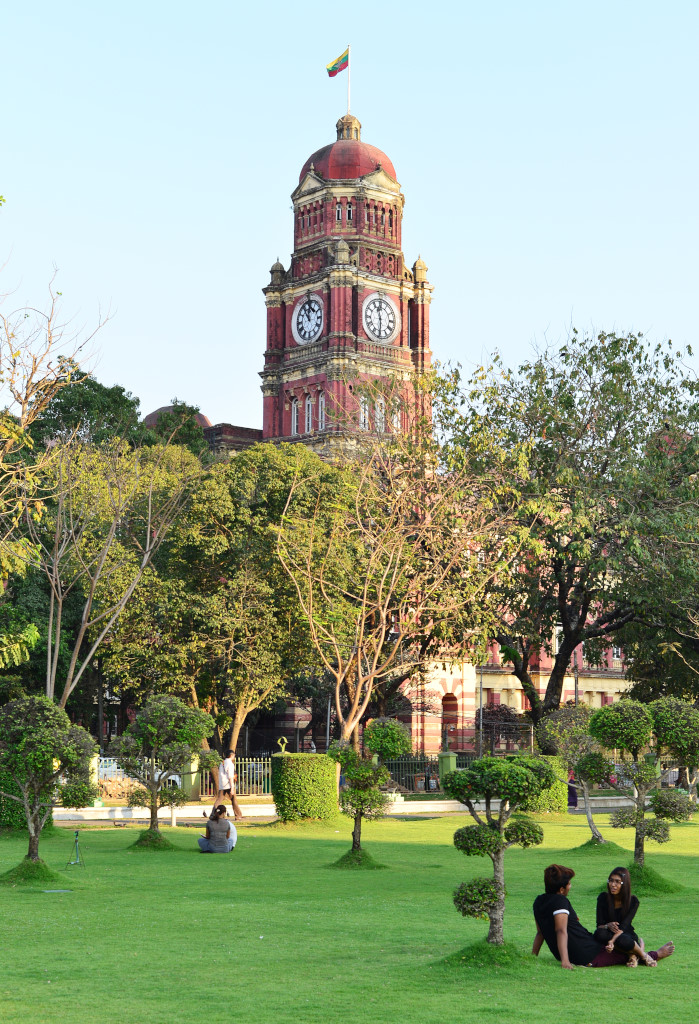 The park is a gathering ground for families, young hipsters, couples, disconsolate individuals presumably contemplating their life struggles, and the workers digging the sewage trench along the side of the road, swathed in their heavy clothing and smiling happily as I pass by, seemingly oblivious to the hopelessness of their predicament. 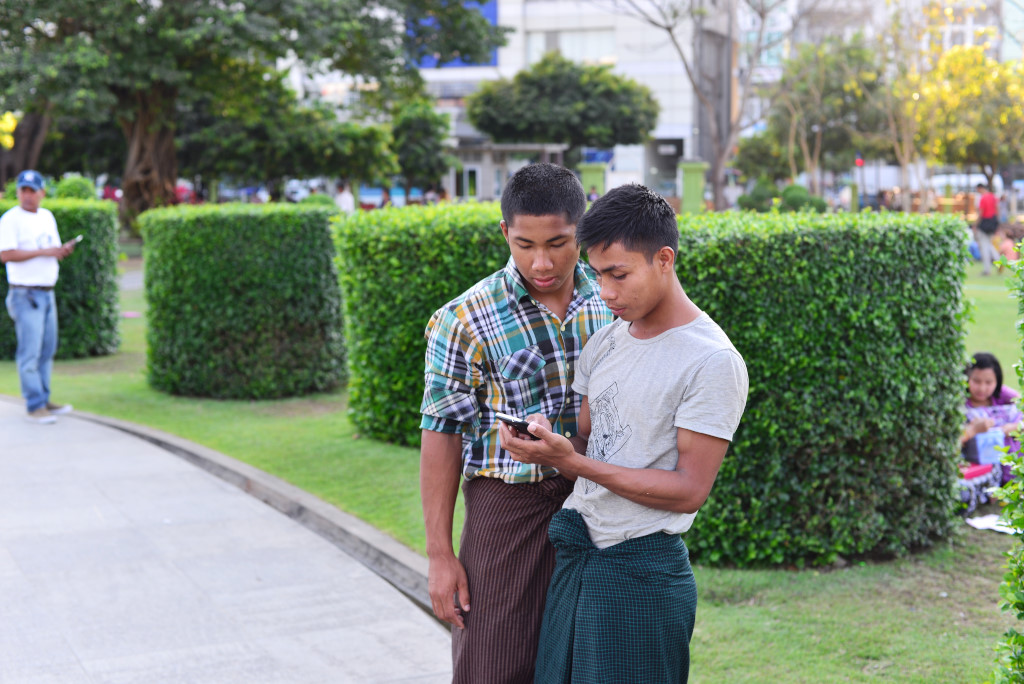 The park front facing city hall is barricaded by barbed wire wrapped metal frames, presumably ready to be put into action at a moment’s notice, as the area would be a flashpoint for protests.

Just as the Bourbon kings built their palace at Versailles in order to remove themselves from the fury of the Parisian public, the Burmese junta built their new capital at Nay Pyi Taw to be as far away as possible from the rebellious mobs that could explode in the capital city. 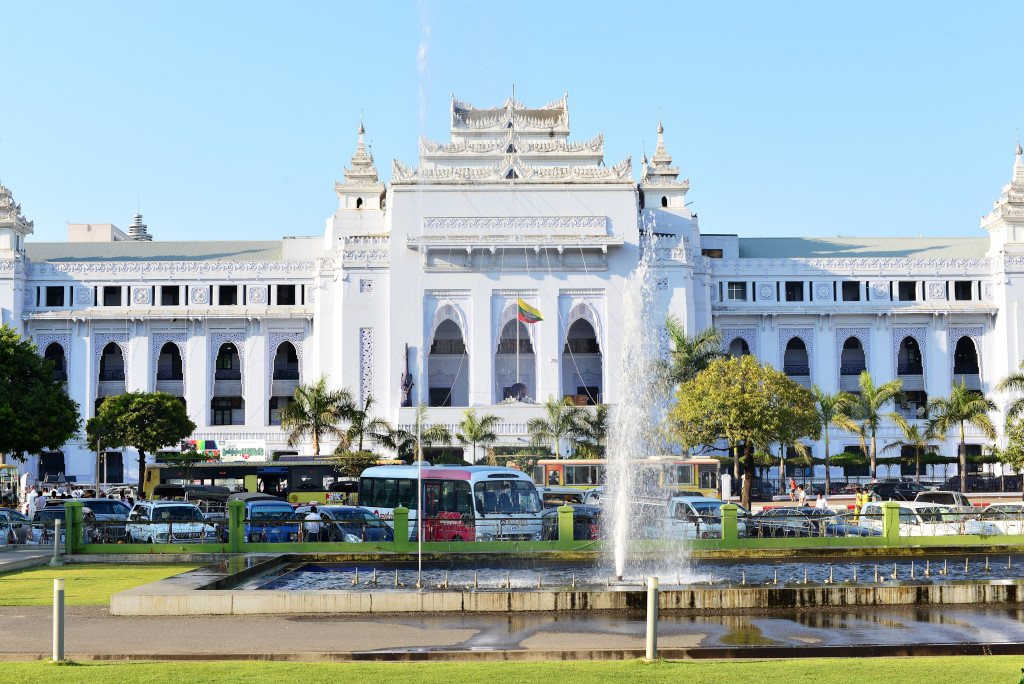 Prior to returning to the hotel, I give an Australian a run-down of the things to see in the country and how to get where. While it’s understandable that most people will just pursue some sort of formulaic agenda when visiting the country, it’s also worth taking a few days out and doing something different, not that I am some authority on unique travel agendas. 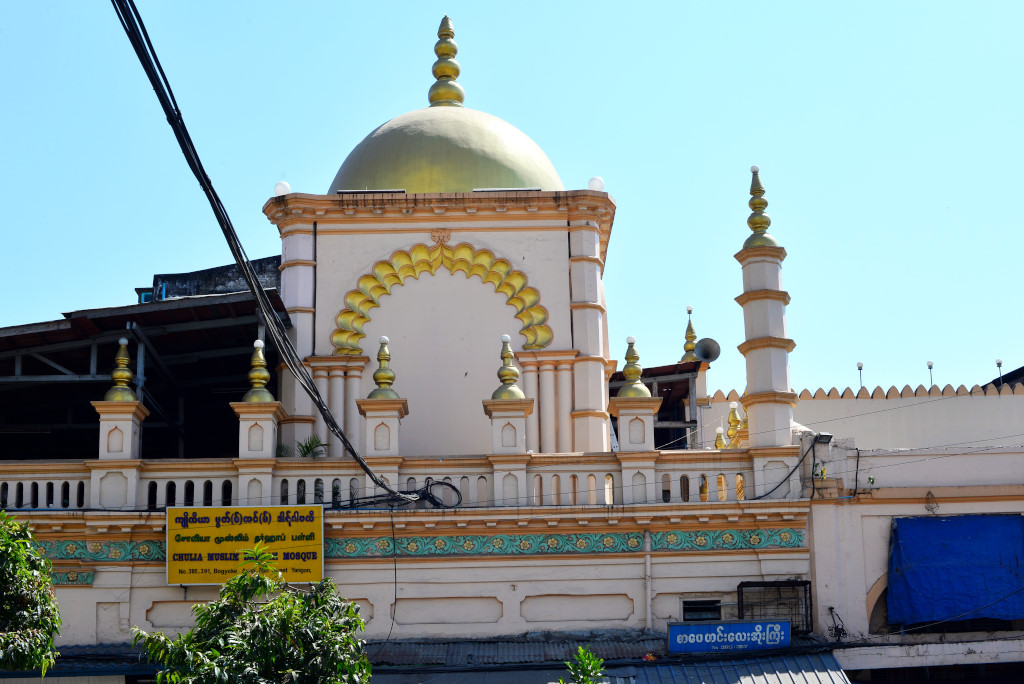