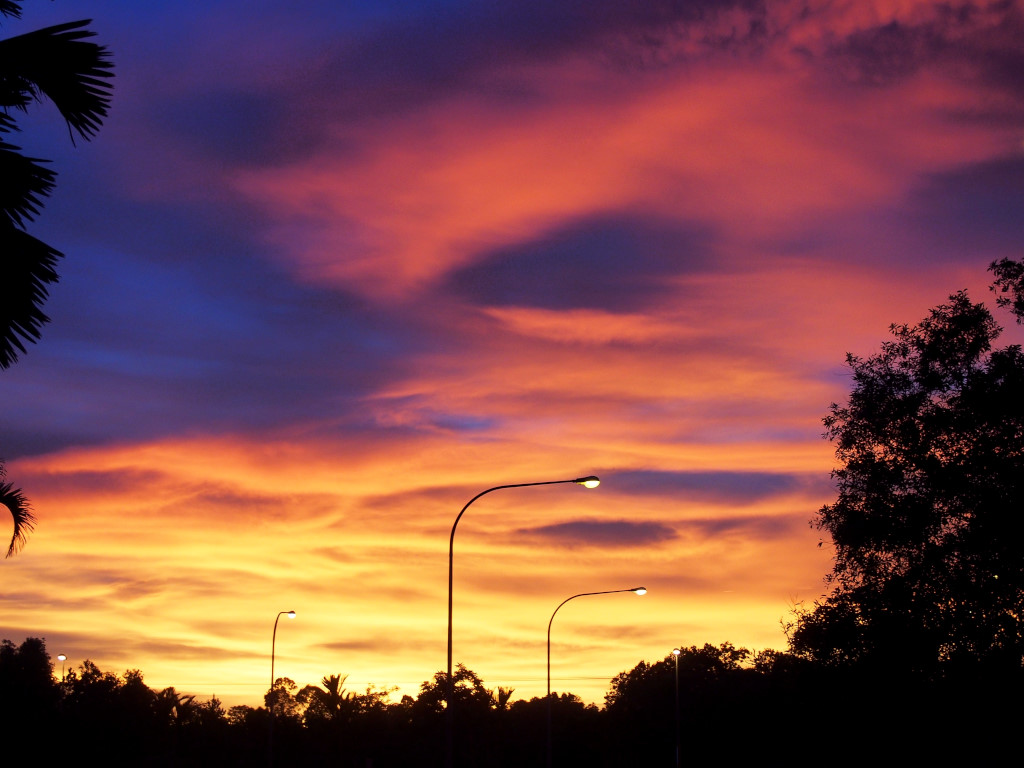 The plane to Kuala Lumpur is almost exclusively comprised of young Burmese who have a fearful uncertain look about them. It appears as if they are flying for the first time, which is confirmed when I take one look at the airplane bathroom and then decide to forgo the toilet altogether.
The flight is refreshingly smooth, the two odd hours of flying time passing by quickly as I busy myself taking notes regarding the past few days’ experiences. 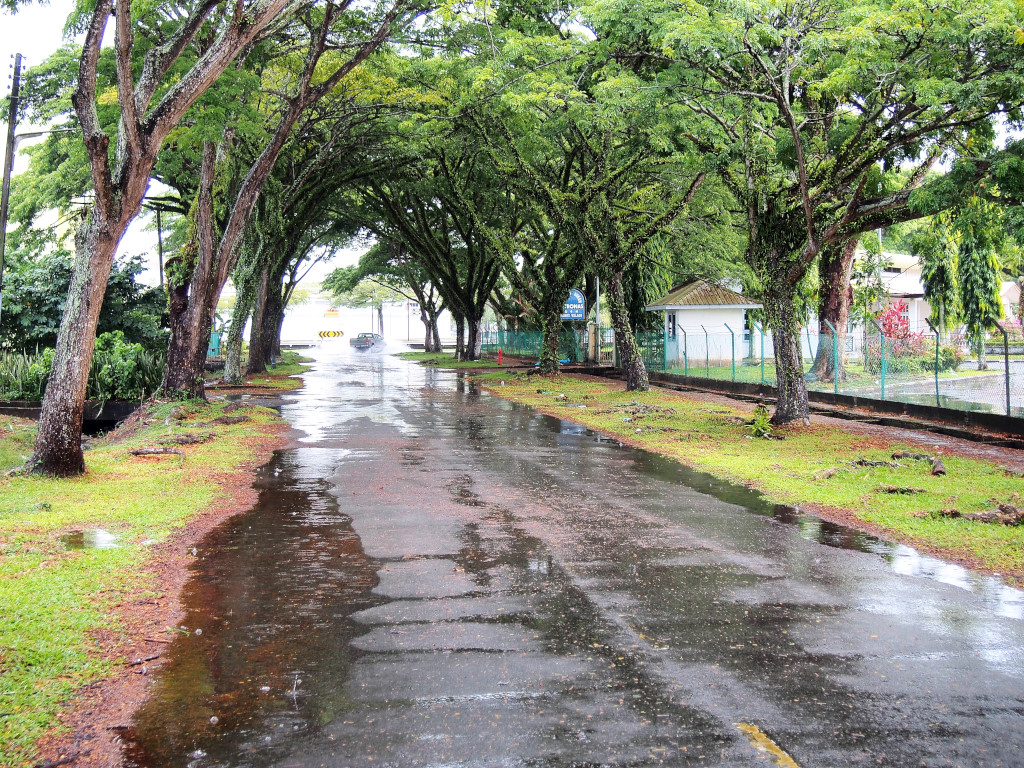 The Airbus descends from the skies, the waters of the Straits of Malacca appearing below as we approach Kuala Lumpur airport from the west. I shake my head as the passengers lunge into the overhead bins, grabbing their belongings as the plane is still taxiing towards the building.
Alone the view of the KLIA2 terminal buildings feels a universe away from the utterly rudimentary country I just left behind, the clean space-age lines and impeccable maintenance unthinkable in a public environment in Myanmar. 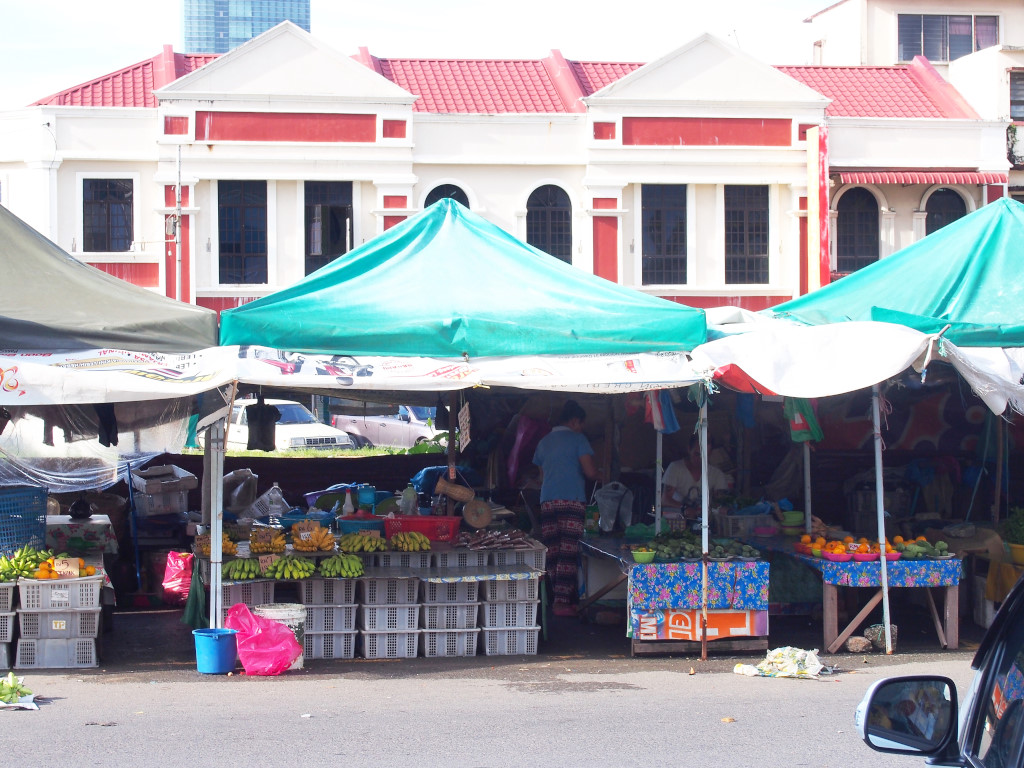 I trudge through the long corridors, and then a switchback to another level, since I am on a transfer flight, then through immigration, the two lone officers bemused by my anecdotes about the country. I return upstairs into the domestic departures, where the courtyard is bounded by numerous luxury goods shops leading to a lengthy narrow building with where the J terminals reside, almost entirely empty. 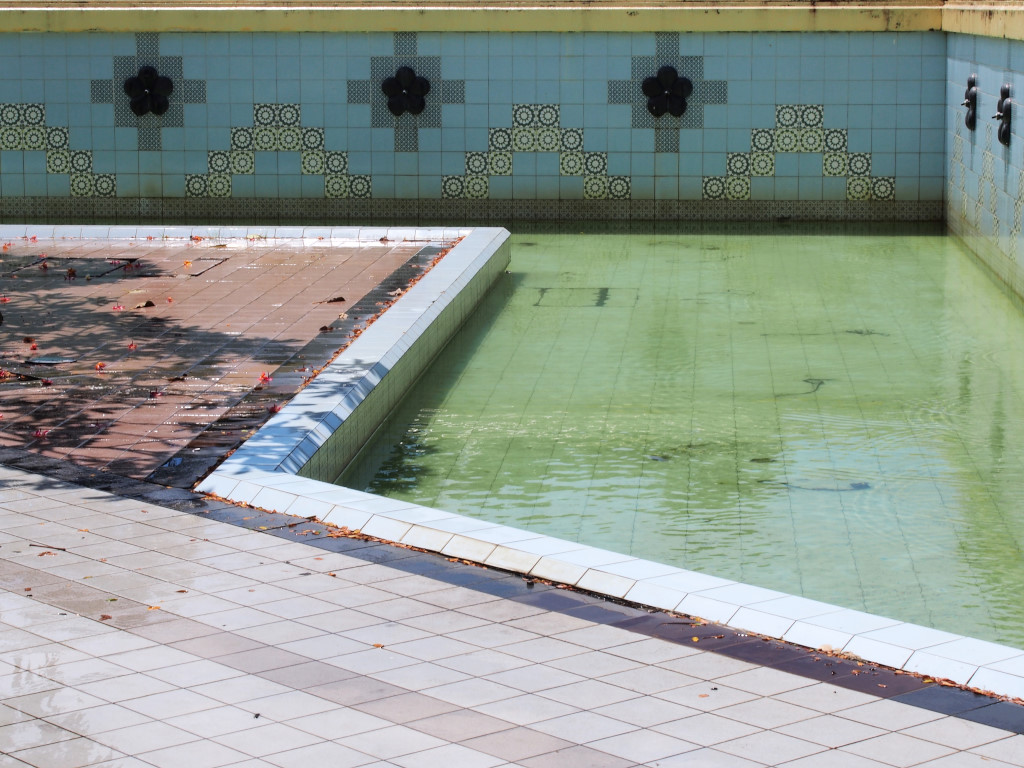 Wandering along the aisles of abandoned shops seems enticing after the bleak confusion of Yangon, although its allure would quickly reach a saturation point. I could always drink more coffee, continue writing, and watch the storm inundate the city and its environs with rain.
The hours pass and it is time to eat, the Assam Laksa offering an explosion of unrequited flavour. I watch the new faces assemble in the waiting area, where I wonder what kind of peoples would be traveling to a city in eastern Sarawak. 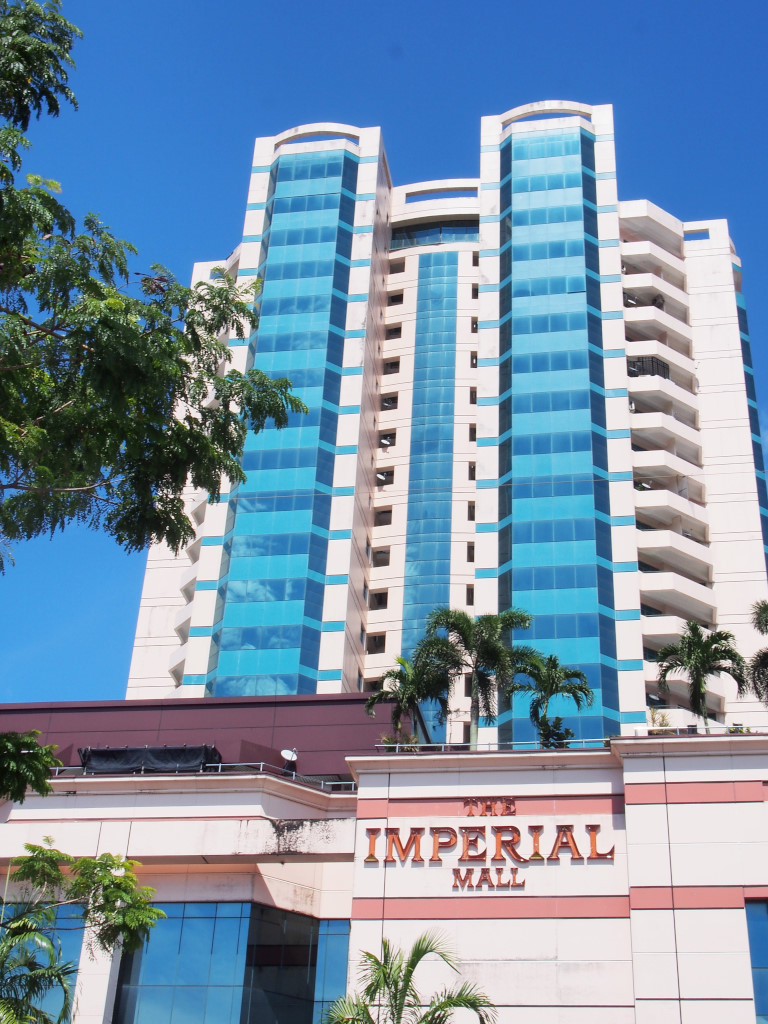 The second two hour flight segment features a more privileged crowd than seen on the plane from Yangon, although even momentary turbulence has a visible effect on a number of passengers, the concurrence of recent airline disasters in the region too fresh in peoples’ memory. But the flight is largely smooth, and soon we approach the brilliant green terrain of Borneo, the plane again descending, landing and taxiing to the spacious modern airport, itself more impressive than the airport for Myanmar’s capital city. 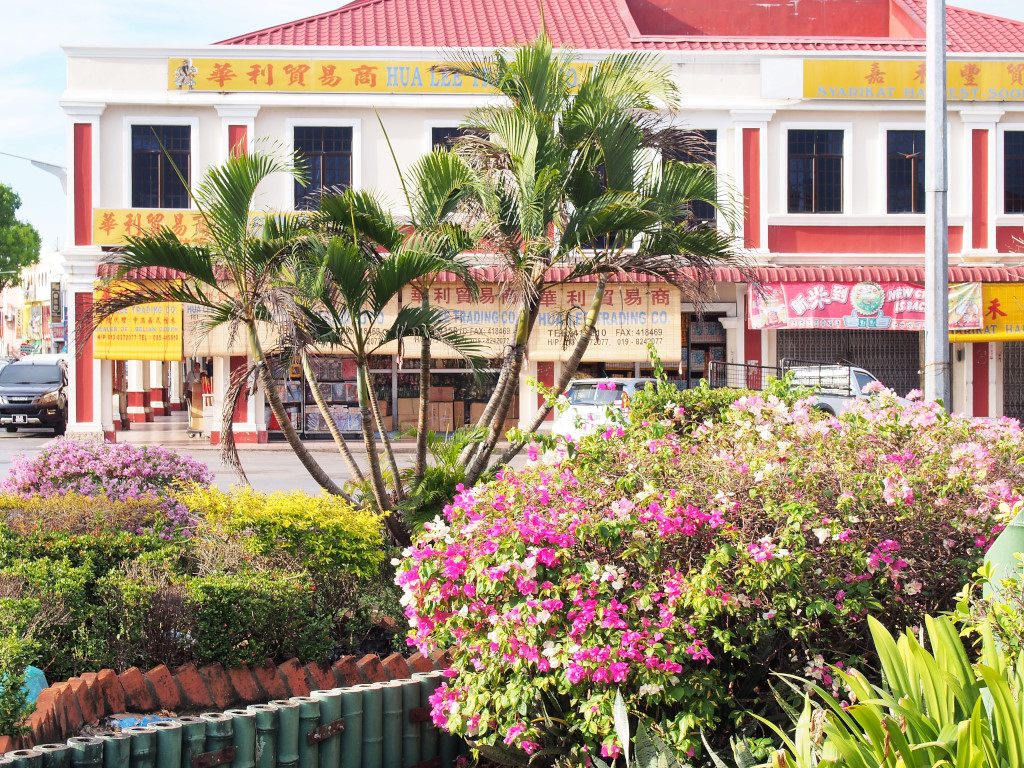 Inside the terminal is even more to behold, full of smart shops, restaurants, traveler services, the clean lines of the vast open space well lit, modern, with a certain degree of poshness, nothing I would have remotely imagined in this offbeat town in Sarawak.
The view outside the huge glass windows of the airport is devastatingly beautiful, the thick layers of cotton batting lining the sky drenched in rich hues of orange, rust, gold and blue, the heavens so illuminated in brilliant colour that I return several times to the windows of the terminal and stare outside in disbelief. 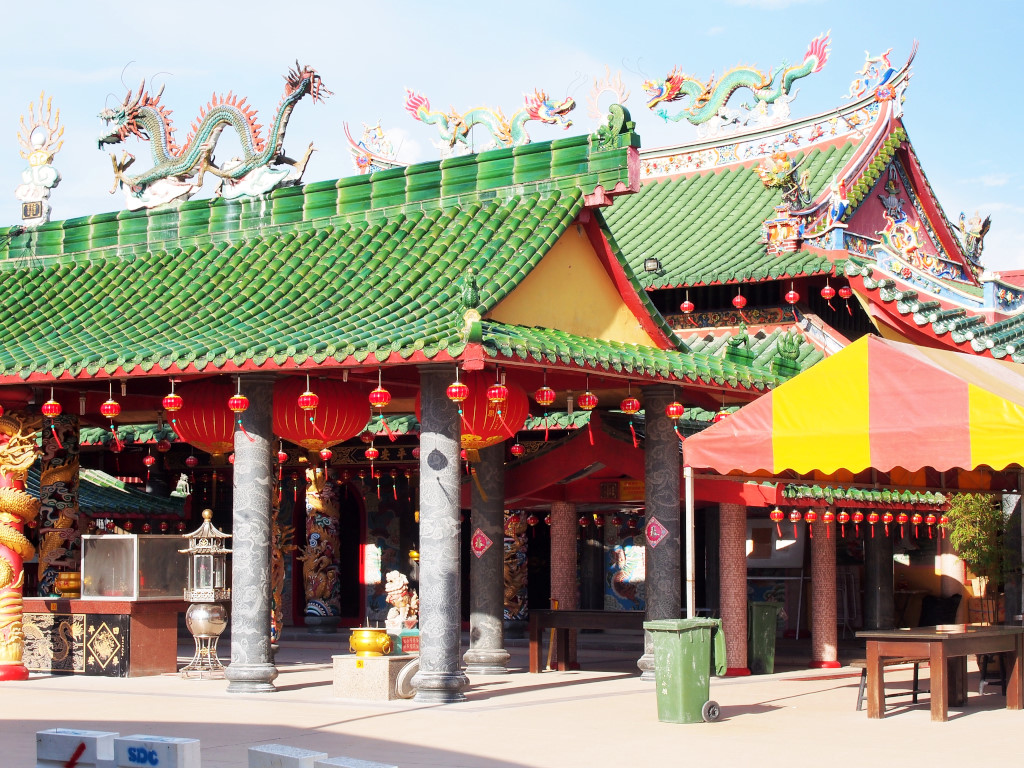 The long taxi ride from the airport to the south of town proceeds through the town core and on to the Miri Budget hotel in the Perlita centre to the north of town. The journey illustrates a vision of Southeast Asia that would be unexpected for many, a city so spacious and modern it has no place in the region, rather, would be considered a model city in middle America. 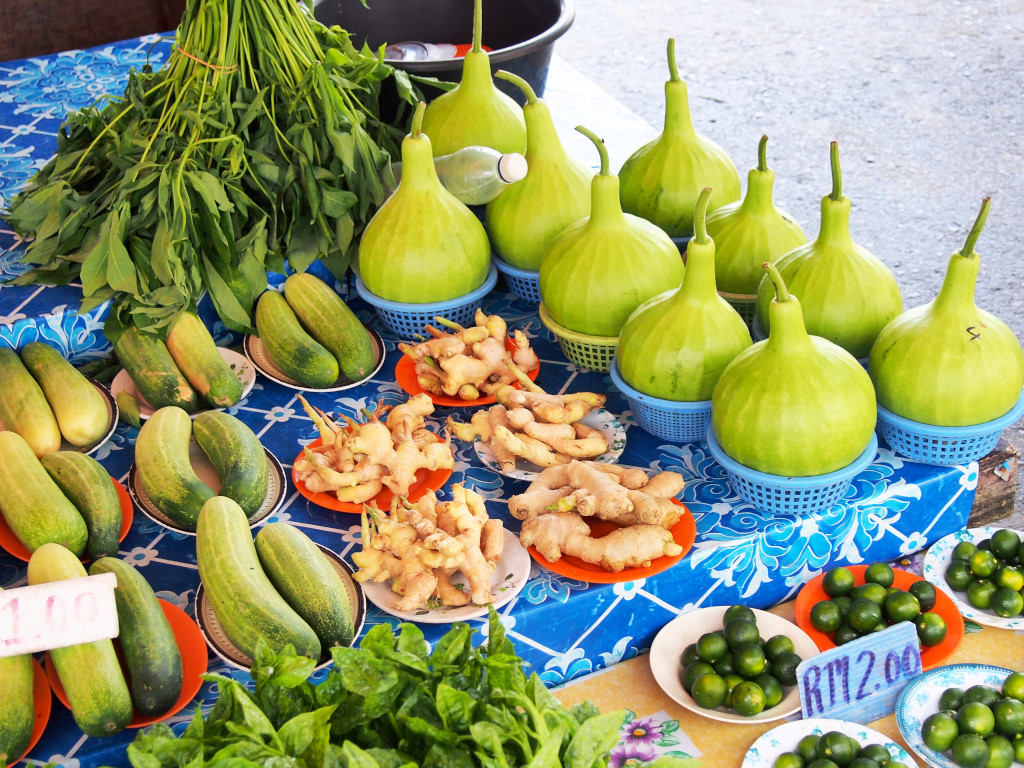 The perfect roadbed, the immaculate new buildings, street lighting, traffic flow, and perfect level of maintenance makes this town a far cry even from the modernity seen in peninsular Malaysia. It’s a huge thrill to be able to take in an environment that is as functional as the one I was just in was not, although I am sure that attraction will run its course fairly quickly. 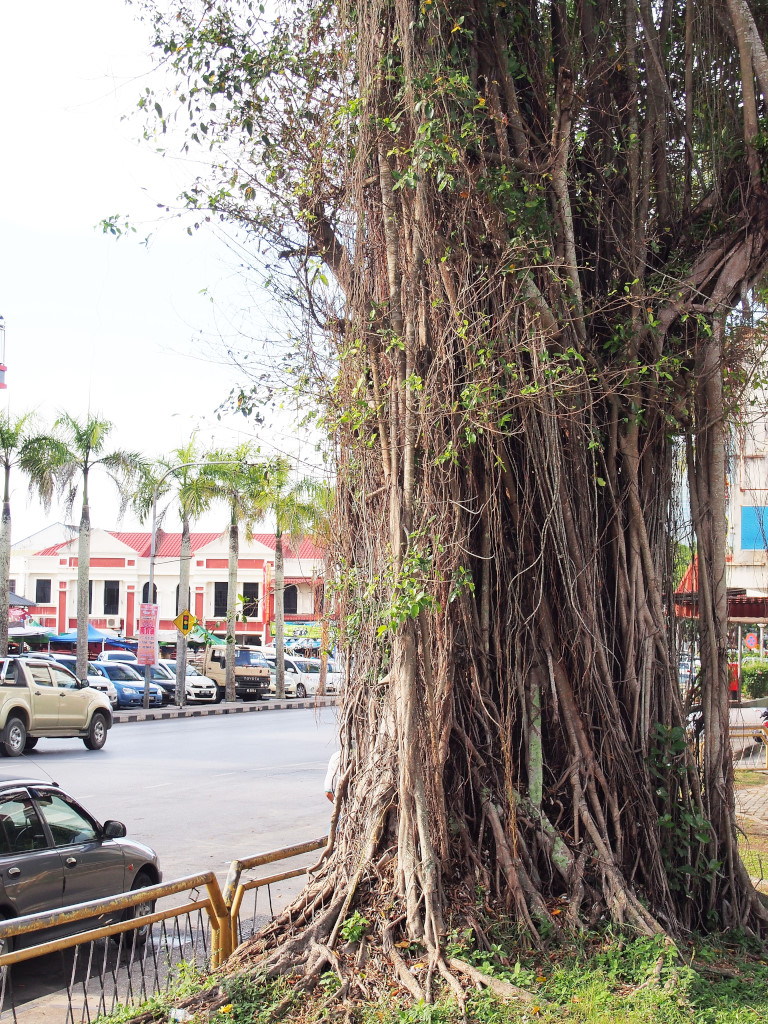 The Miri Budget Inn is nothing to write home about, and certainly no high end business hotel on the lam in some Miri suburb. Rather, it represents a generic and characterless shoebox establishment squeezed into the four story box-like structures housing all manner of commercial and retail establishments. The Perlita centre is littered with endless rows of huge concrete boxes, strips of brilliant neon emblazoned across the fascia of the buildings announcing their respective businesses. 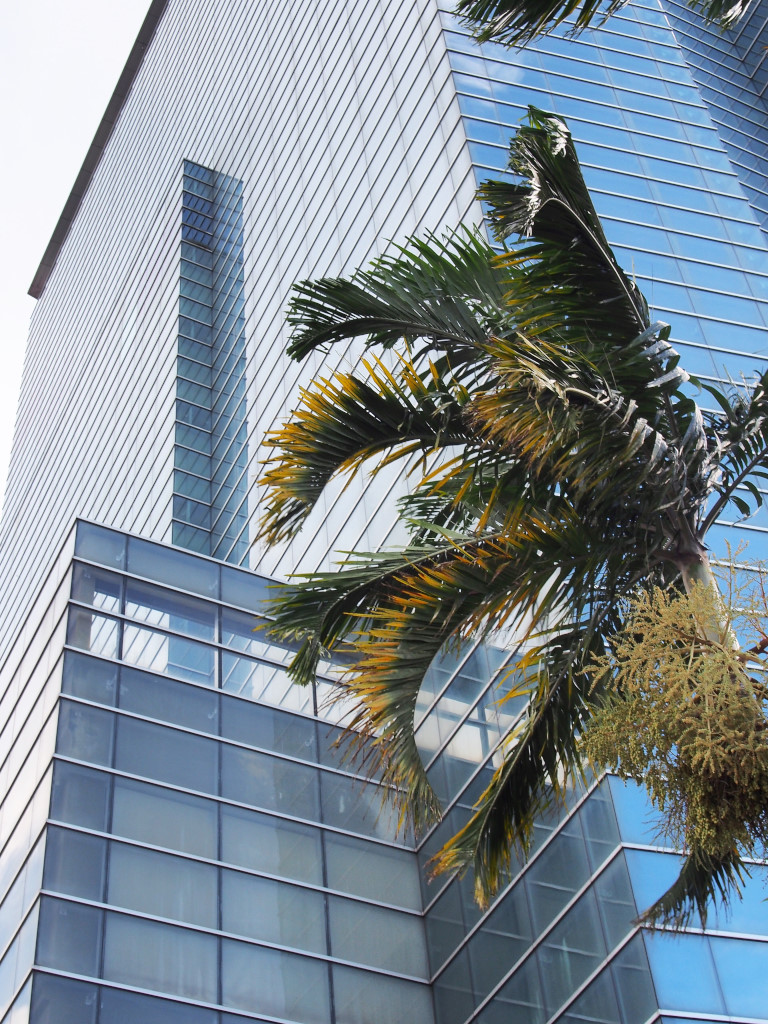 Far from some fancy business hotel, the Miri Budget Inn offers nothing more than small, effectively windowless musty cages that barely fit the queen-sized bed housed inside, although at least I am allocated a slightly larger room inside the narrow passage. The room contains a tiny window looking out over the busy commercial plaza below, as well as a small night stand, modest table and chair, with a functioning bathroom and AC rounding out the room’s effective value. 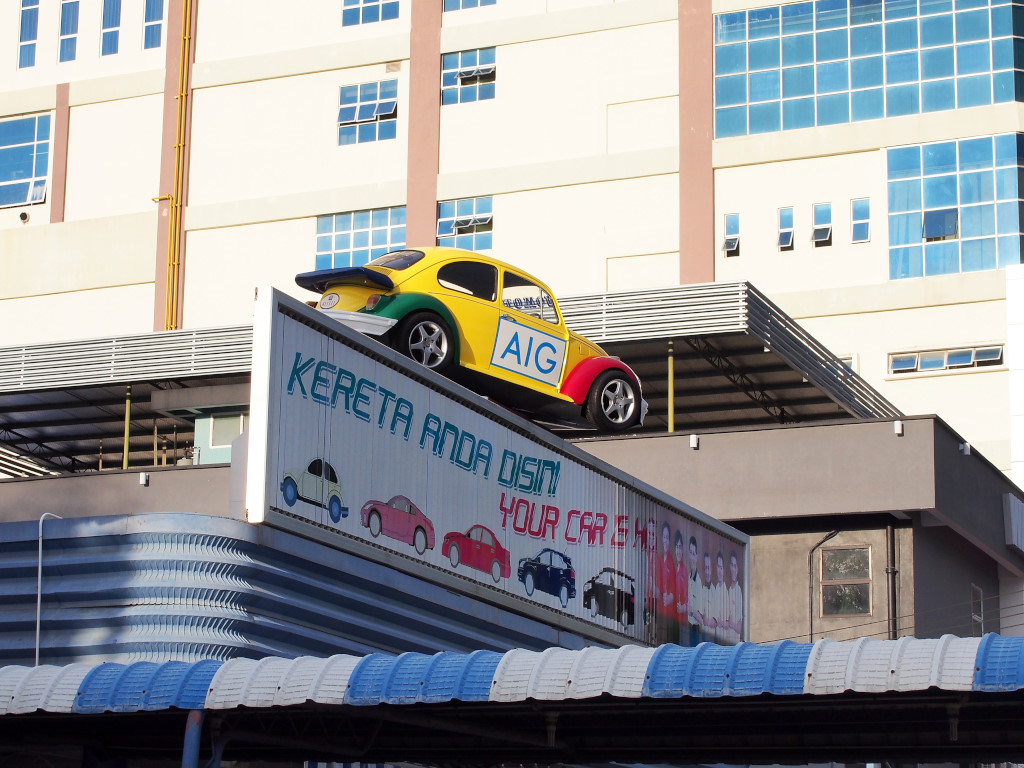 The lighting and wifi are excellent, I have enough space to store my things, and the bed is comfortable, so this is still a far cry from the purgatory I was subjected to in Yangon – and for barely 2/3 the price.
On the ground level is the predictable sea of Chinese-oriented eating establishments that marks every good Malaysian city, although admittedly, urban Sarawak is in fact home to large concentrations of Chinese. 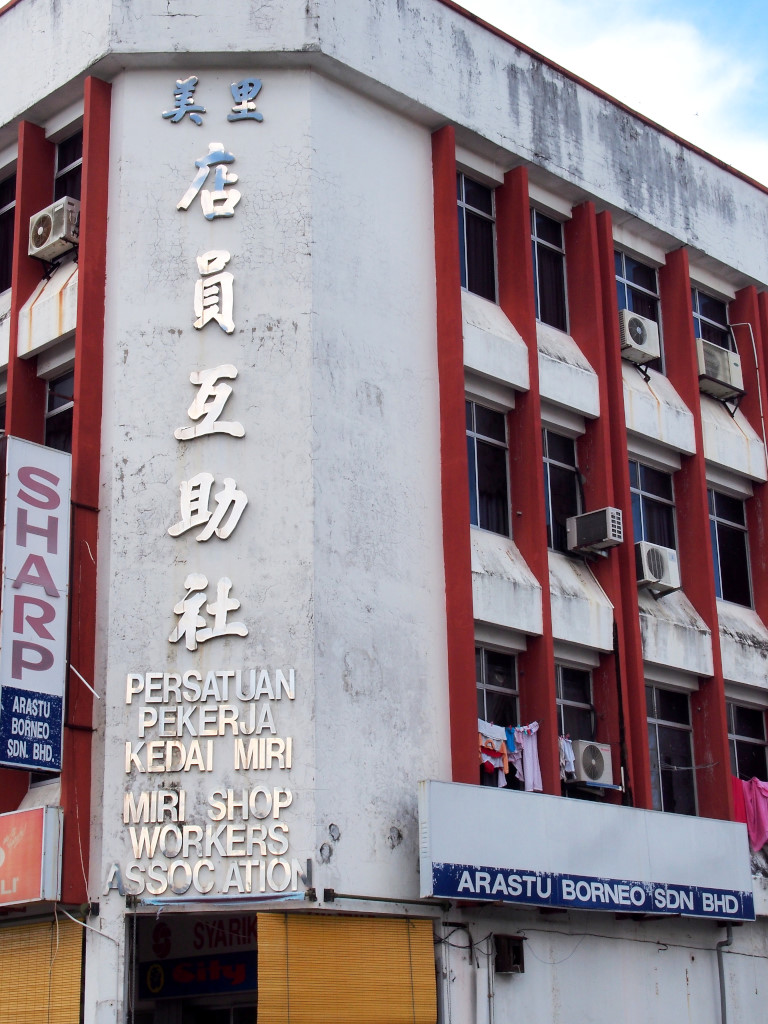 The American I meet in the hallway is hardly that impressed by the place either, but just as in my case, he found it to be one of the cheapest places available on the internet and wanted to give it a try. You can always get inexpensive hotels that represent very good value in Malaysia, but the places are invariably far away from town – and Malaysia typically has poor or nonexistent public transport. I can’t see this town being much better, given how wealthy it is and hence people being more likely to have their own vehicles. 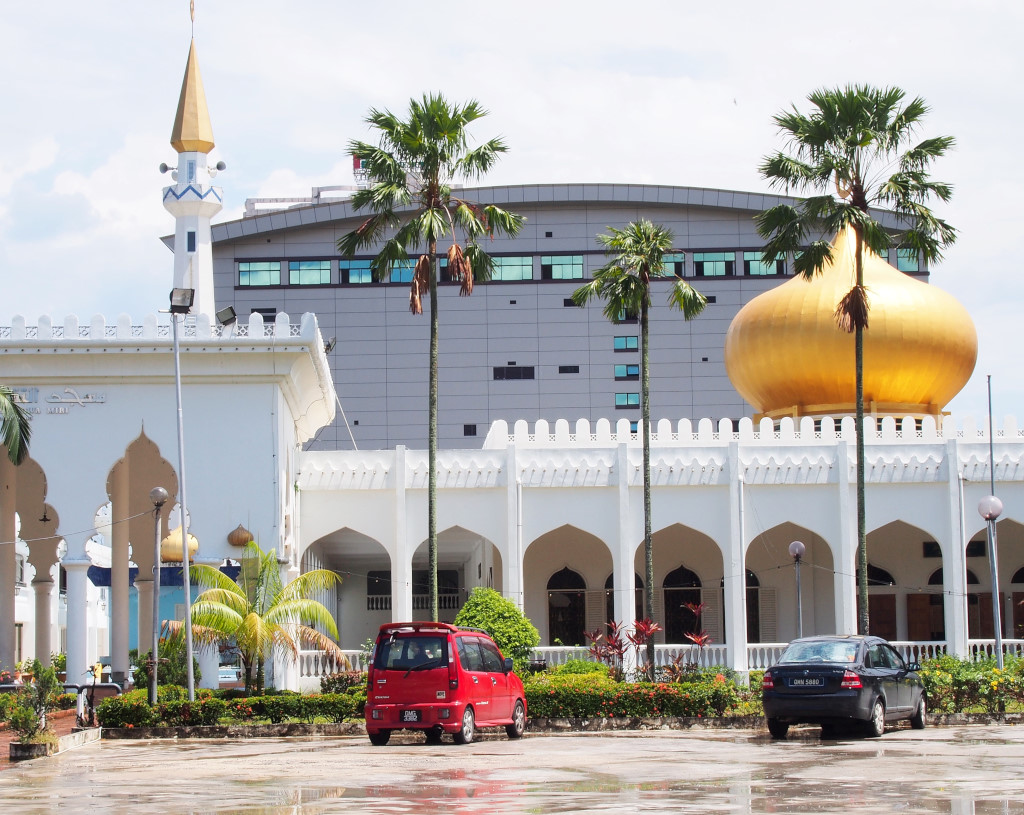 Before the discussion can progress too far, he suggests convening to the establishment across the alley downstairs, where cans of Carlsberg are a mere RM 3.50, a very enticing price indeed. He is a hospital administrator from San Francisco who decided to abandon America for years of traveling and settling down in a town north of Chiang Mai in Thailand, close to the Myanmar border. He loves it there, a world vastly more enticing than the south of Thailand, although he had amazing experiences traveling through the rest of the world, something he won’t be getting out his system soon. 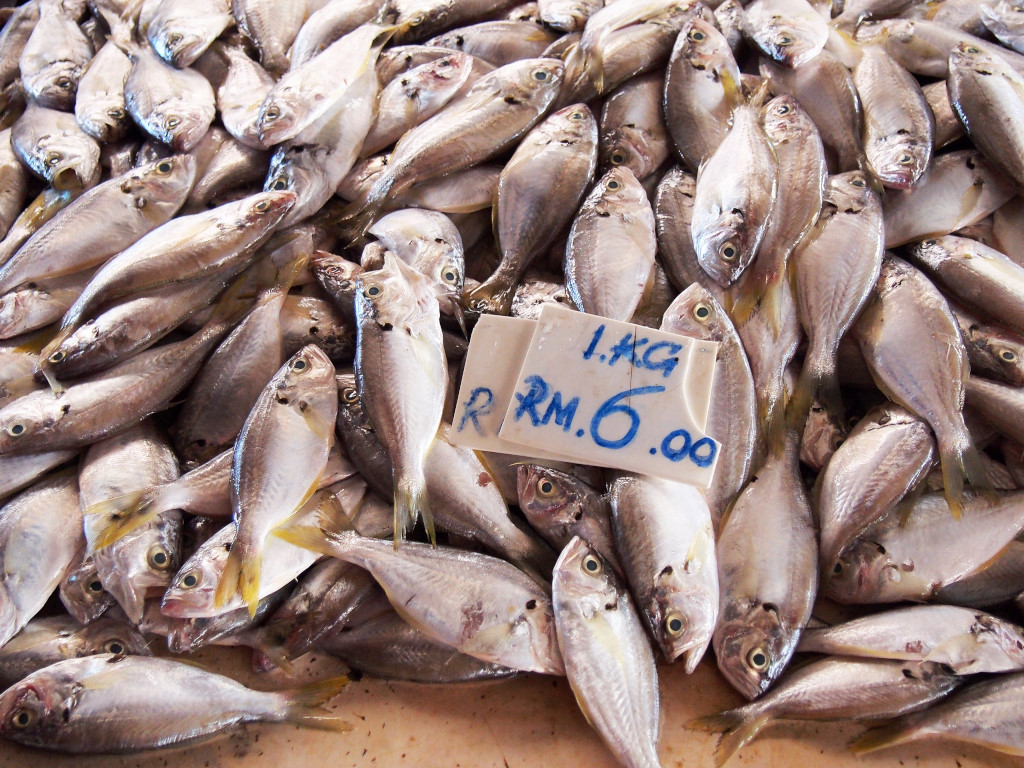 Frank has been here for ten days but can’t stand Malaysia, as it seems utterly characterless to him. It is, but Malaysia offers an altogether different vision from other countries in the region. 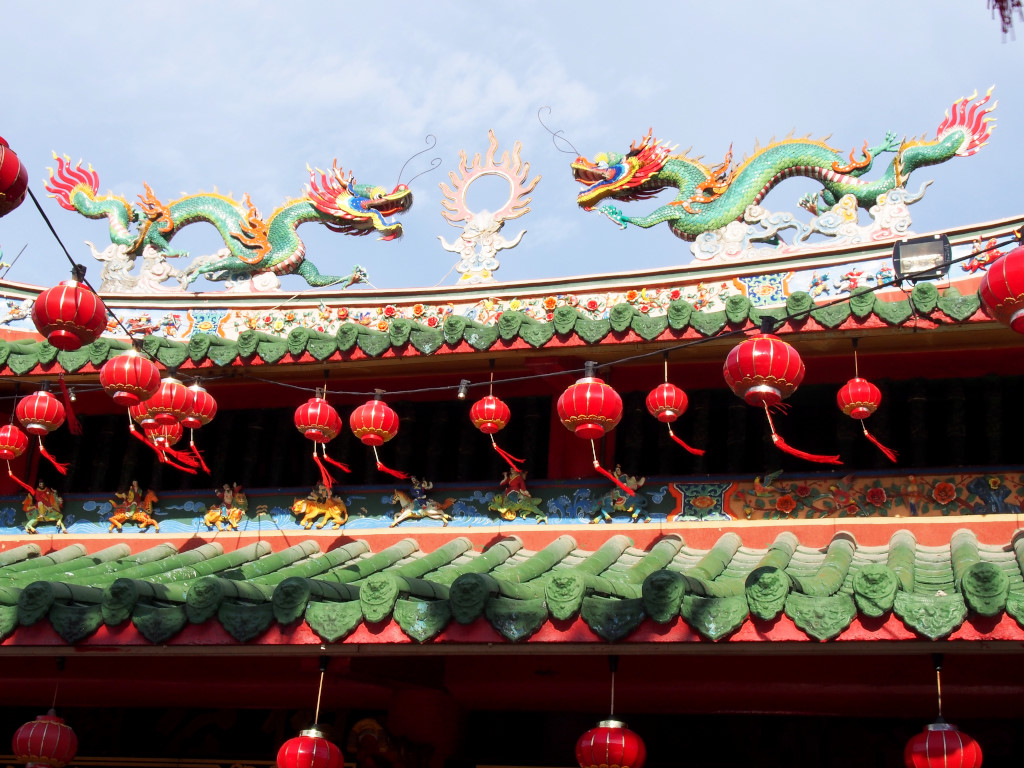 We talk about our experiences traveling in Southeast Asia. From what I have discovered this time on the continent, the kind of experiences one would have made has a lot to do with their timing. I take a lot dimmer view of Myanmar now, but that also reflects the length and depth of my recent trip, less saddled by blind romance and naivete. The exotic Thailand of yore is long gone, and the rustic simplicity of Cambodia will be vanishing. Myanmar is becoming very expensive for travelers, saddled with overpopulation, a rudimentary infrastructure, a population increasingly wanting to claw its way into a brighter future, etc. 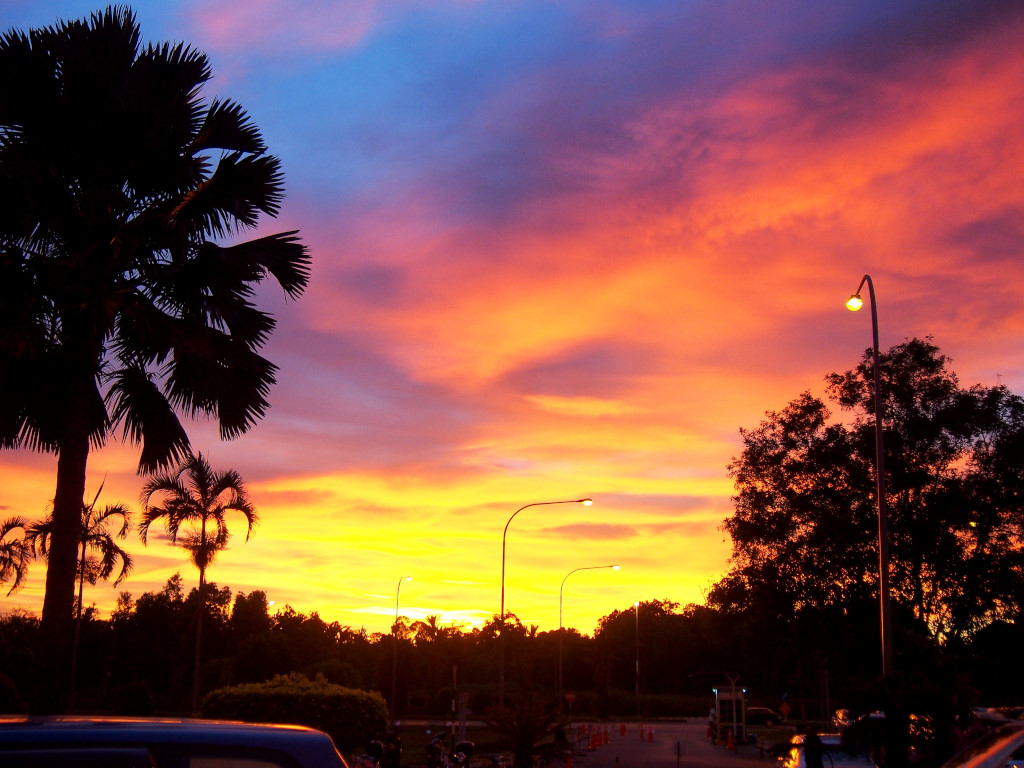 In the interim, Frank needs to return to the hotel room while I cross the street to the restaurant affiliated with the hotel, and take in a tasty mee goreng and bubur, good solid and tasty food that is really one of the reasons you come to this country – because Malaysia is really about food!