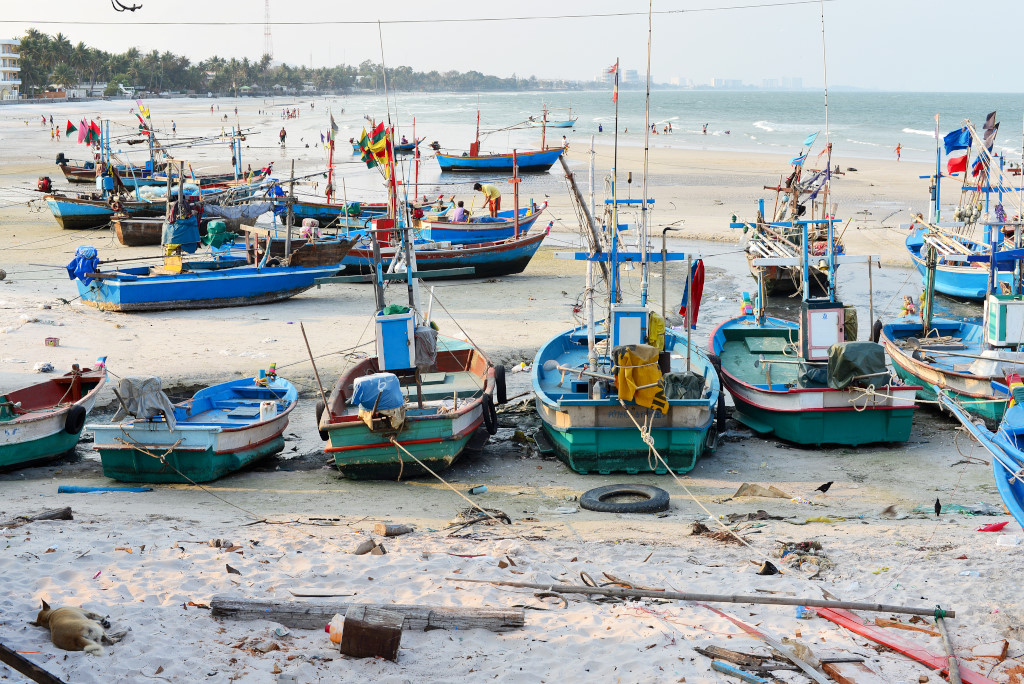 A drawn-out morning in the far-from-memorable Cha-Am Beach Guesthouse, then a coffee at La Baguette en route to the highway. Sure, I should really have invested in a taxi, but am too lazy to flag down a motorcycle taxi driver, and am not even sure if riding with a motorcycle taxi driver would be such a good idea in the first place. An automobile taxi is out of the question, and in any case, the walk to the highway is really not that far, and certainly not two kilometres, as I had been told before. 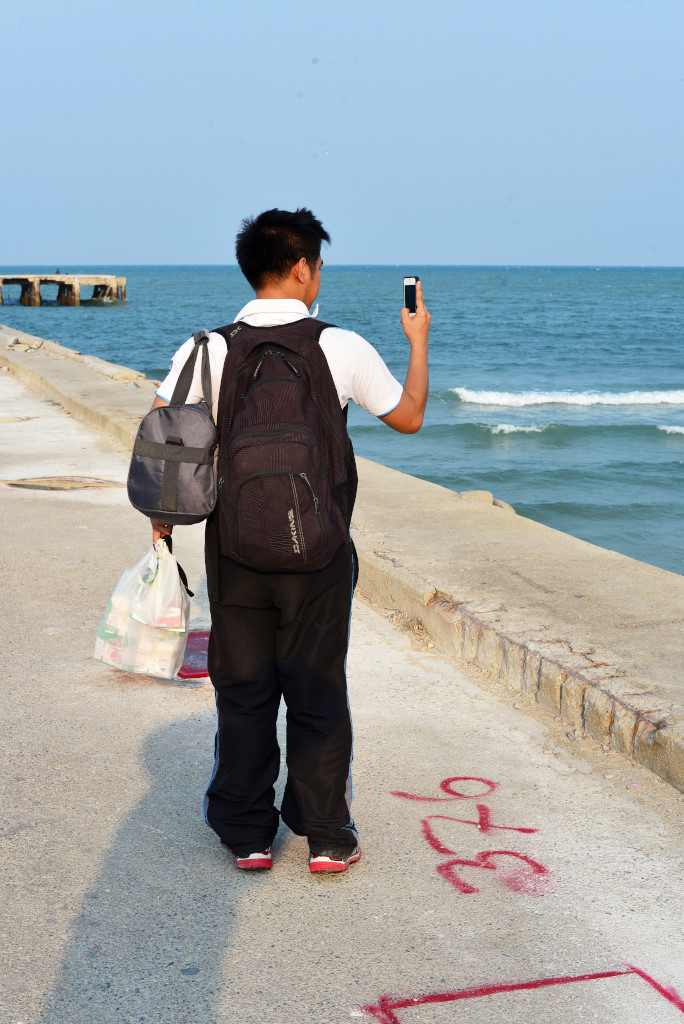 It is not clear to me whether the orange-vested men at the minivan stop are motorcycle taxi drivers or actually work for the minivan service, but they don’t exactly radiate the most welcoming attitude. I make an attempt to ask the overweight man seated at the ticket desk as to whether I can catch a bus here, but am soundly ignored. Minivans arrive and depart on a continuous basis, with no orange bus in sight, which should in theory pass through Cha-Am from Phetchaburi on a half-hourly basis, so I need only be patient. 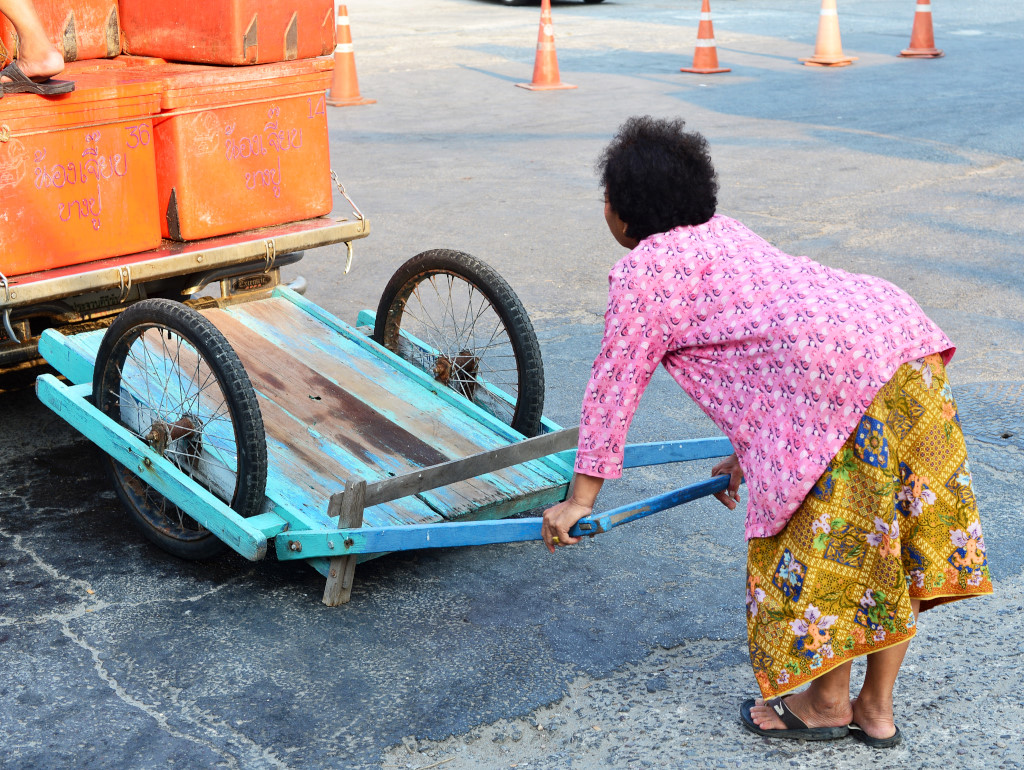 Sitting in the shelter, I look at the urban morass around me, realizing how utterly this area has been overdeveloped to the point of the grotesque, and doesn’t remotely merit being called a beach resort. The minivans come and go, but I remain waiting, with that perennial fear that perhaps the bus won’t show up at all. But in the end it does, is almost empty, has loads of room and headroom that the minivans could not dream of providing, and to boot the bus driver is exceedingly friendly. 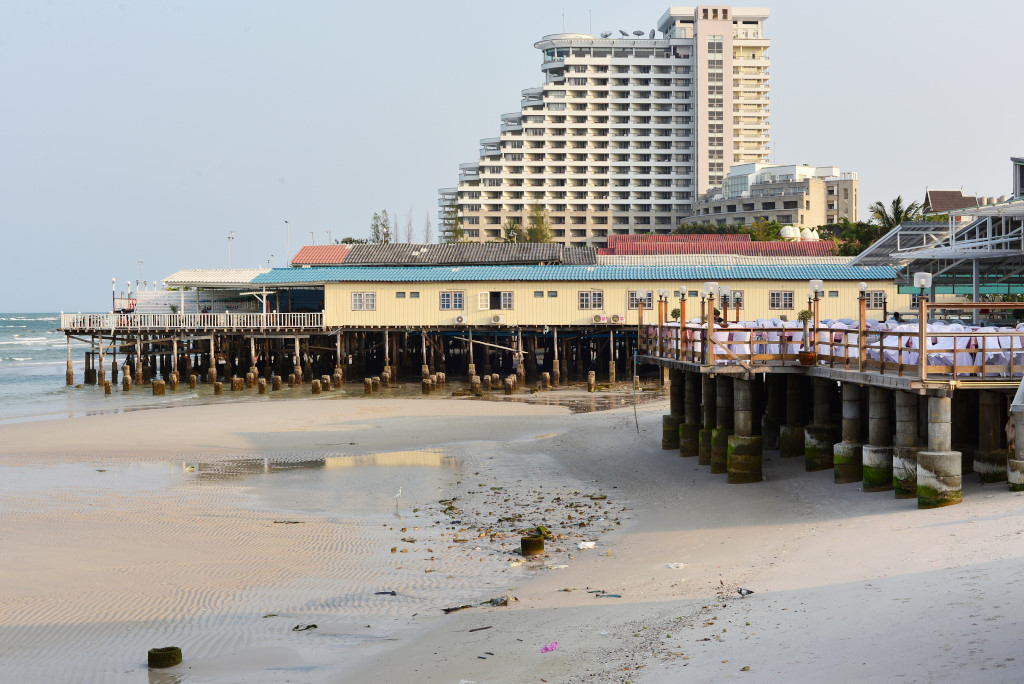 The urban morass of Cha-Am just continues on and on, the hotels with pretensions at being upscale randomly planted in the midst of the dry scrub and dilapidated urban landscape, evoking more of a sense of desolation and maladroit urban sensibility than desirability. Green spaces and agricultural land reassert themselves as we continue further to the south, then enormous luxury developments that threaten to swallow everything in their path, the partially completed monstrosities vast pools of concrete in which emaciated locals toil in the sweltering heat, their lives profoundly dissonant with the outlandish pretensions of these paeans to fabricated happiness. 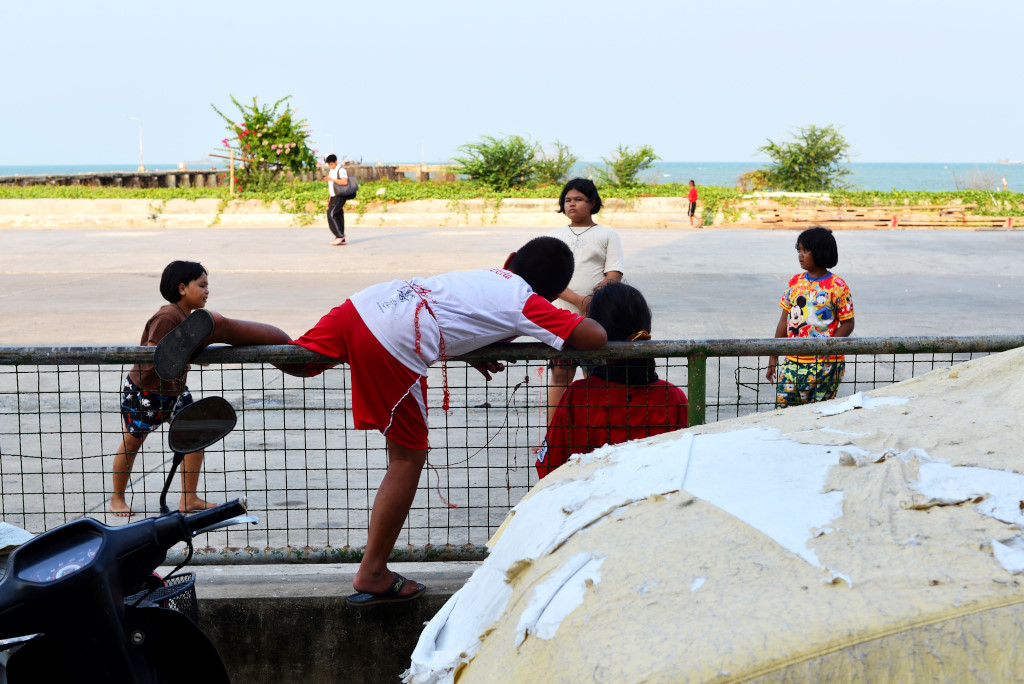 Gradually the garishness of the developments transforms into a landscape that seems to mesh more credibly with the luxury developments, the broader extra-urban panorama evoking a sense of genuine affluence. Hua Hin itself bespeaks a very different and more authentic sense of quality than run-down Cha-Am, well-maintained, well-appointed, with restaurants, hotel complexes large and small that actually look appealing, rather than purely institutional, with a substantial boutique feeling, smaller tasteful hotels abounding. 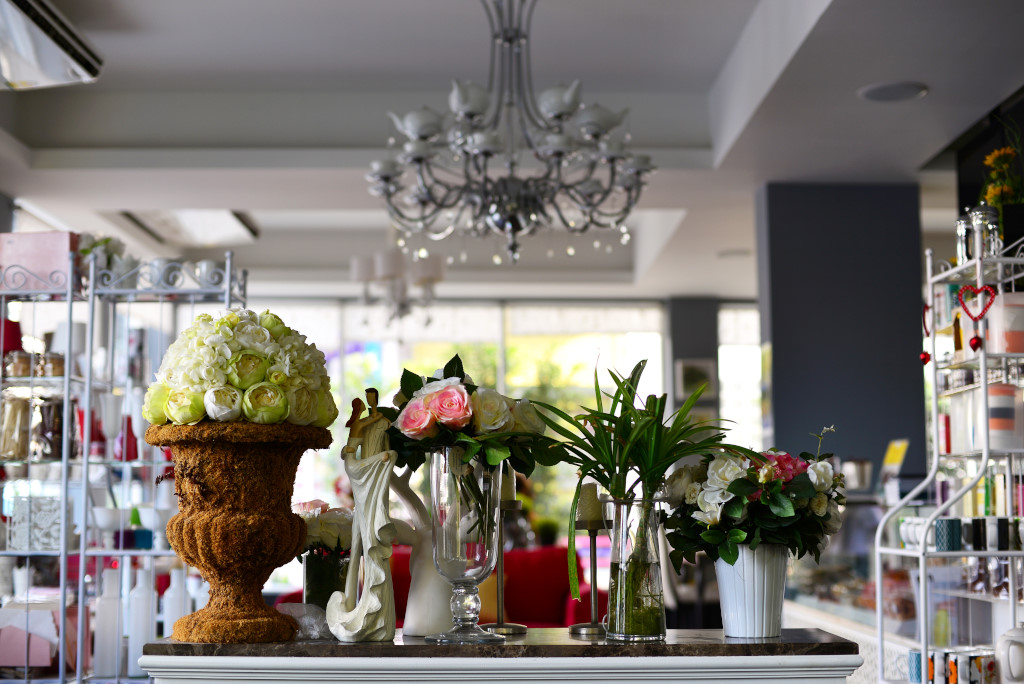 The bus drops me off in the market area, since I conveniently hadn’t bothered making a map of the area of the hotel. I am in luck, however, as the market is only a few blocks from the hotel, which is far enough away from things, set in an intimate pocket at the centre of town, at the effective juncture between the more commercial and frayed south side of Hua Hin, and the far more exclusive north side of town.

Dropping into the Thai tourist information office, I am assured me that it may not be a good idea to rent a motorbike without an international driver’s license, which would put a damper on the idea of heading south to a national park that had caught my attention in the travel guide. Visiting the park without independent transport would simply not be viable. On the subject of getting a tourist visa extension, the representative really has no idea, although she offers to phone the Immigration department for me and find out.

The Tong Mee guesthouse is a relatively modest, narrow apartment building set in one of the sois running from the main road, several generations of women camped in the modest waiting area in front of the hotel. The room itself is several stories up a narrow staircase, small, with large windows, comfortable, the queen-sized bed with typical firm mattress complimented with dark wood furniture and a fridge, not impeccable, but comfortable, clean, and well-maintained without being sterile. 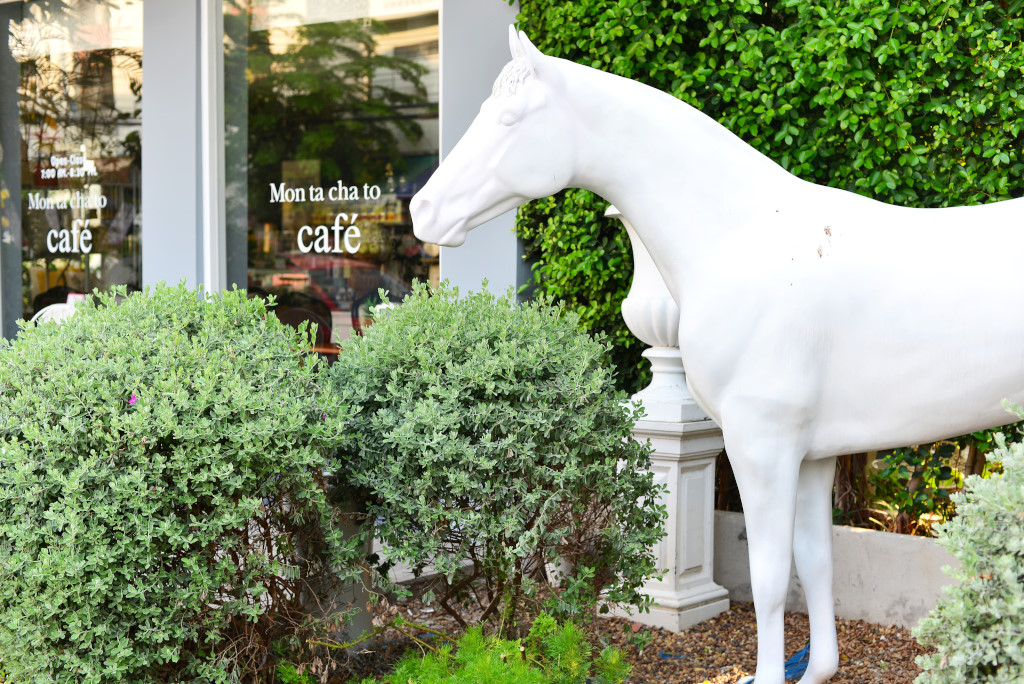 The proximity to the main jetty is really great, with the mid-range European eateries that run towards the waterfront, posh in their feeling, the small alleys around the beach with some genuine character, the pier itself extending far into the water, the evenly-spaced chop of the waves moving towards the greyish sand beach, feral gusts of wind welcoming in this intense heat. 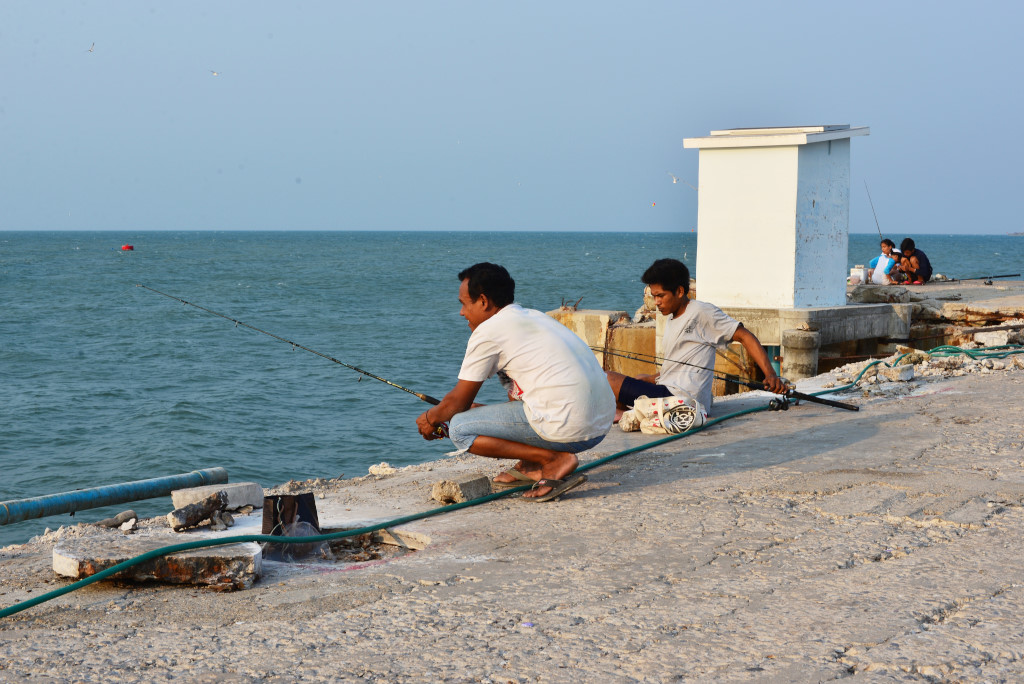 A few fishermen clean their nets on the jetty, women cleaning quantities of squid in large buckets of water, most of the fishing on the jetty occurring on the part of individuals casting their reels into the water below. A continuous column of young men in white golf shirts and blue and black track pants meander towards the waterfront, although it is not remotely clear where this throng is heading to, and it couldn’t be the small patrol boat docked at the end of the pier. On the other hand, perhaps this boat is used to ferry the men to the larger naval frigates anchored off shore. 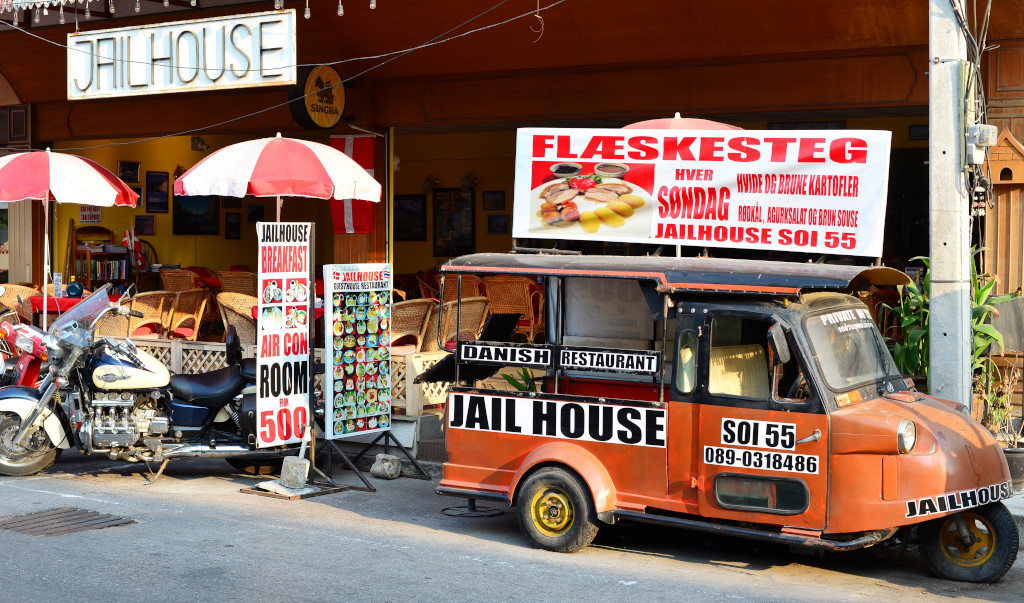 The huge Danish flag flying over the Scandinavian eatery hints at the substantial proportion of expats that the Scandinavian nationalities make up here. I can also see that there is quite a selection of budget hotels in town; as usual, Tripadvisor was far from comprehensive in its inventory of inexpensive hotels – not that I am unhappy with the Tong Mee. 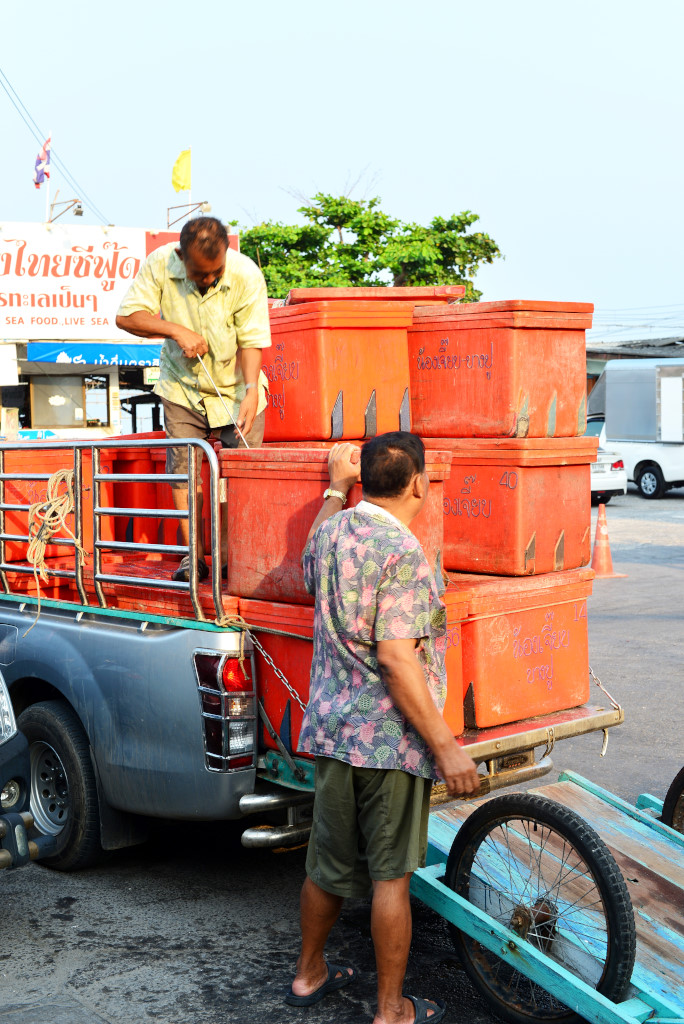 On the road, I stop a slightly undomesticated-looking tall Dutchman from Amsterdam, here on a 10 week jaunt by motorcycle through the country with his wife and small child. He assures me that no one has ever stopped him over the last month and raised the alarm of not having an international driver’s license, although he does caution me to wear a helmet when riding a motorbike here, as not doing so is considered a serious problem. 10 weeks is an ample time to spend in one country, allowing for many different experiences, although I am not sure I would be that motivated to spend so much time in Thailand. 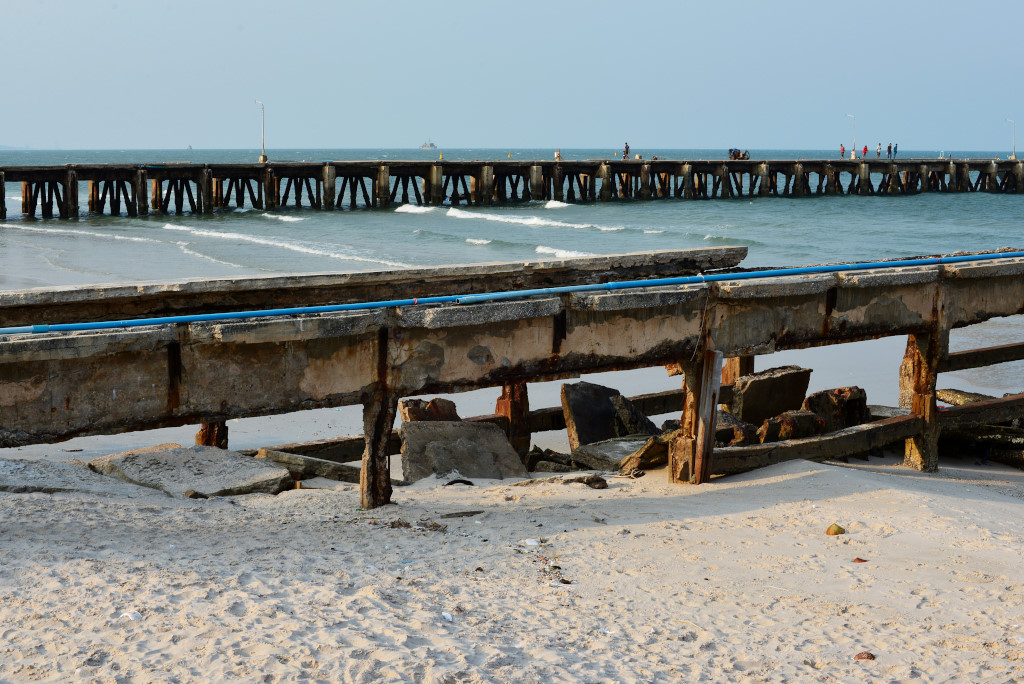 He has enjoyed Thailand tremendously, but also has the freedom to stay wherever he wants, usually in relatively private places in the countryside, and is also not traveling on a rock bottom budget. Hence the excesses of tourism I see are not really on his radar. I laud his home country and the beautiful historic cities in the Netherlands, but Gouda is definitely not a city that should earn my praise, he indicates, given the violent gangs associated with the town. The conversation rambles on, but the real takeaway is the preternatural sense of refinement the fine denizens of his home city have. 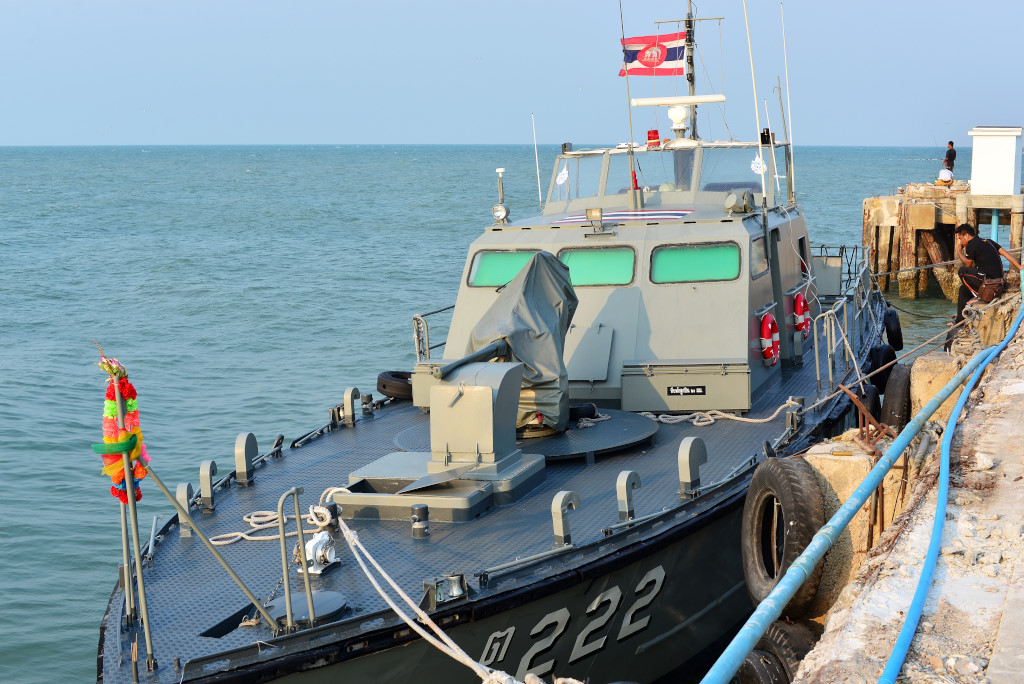 The troops of women hunched in front of the neighboring massage parlours howl in our direction as we talk, and continue calling long after we part ways. 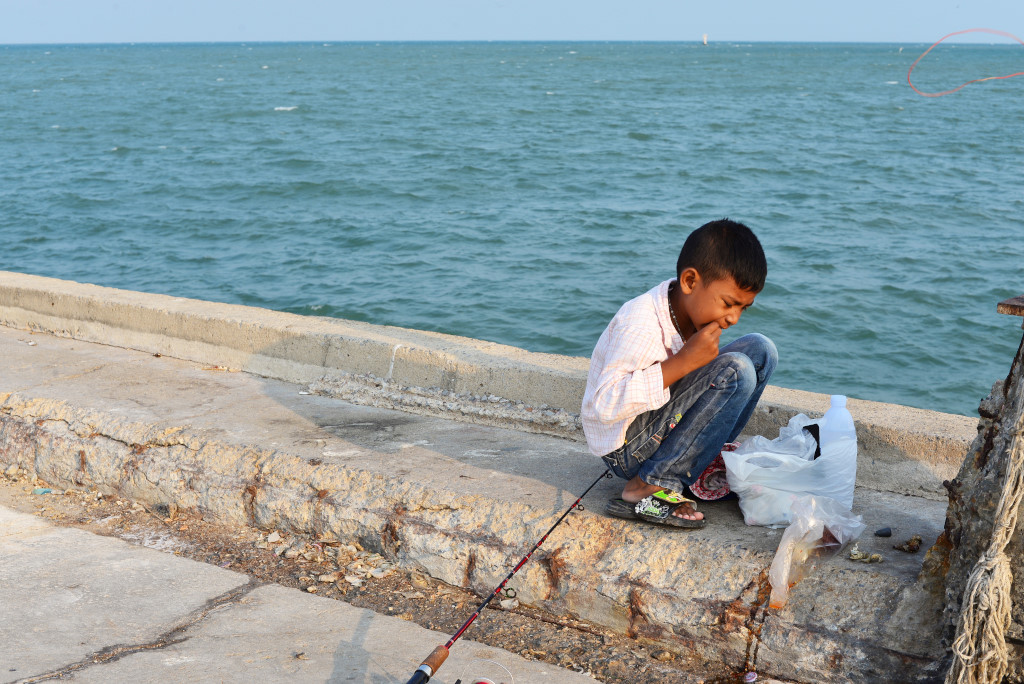 The beach extends north of the jetty, similar the waterfront at Cha-Am, but somewhat more sheltered in its feeling. It seems I must be missing something, since I see virtually no one on the beach – and Hua Hin is supposed to be a major beach destination. Unlike Cha-Am, with its continuous grid of sun umbrellas and reclining chairs lining the beach, the beach is completely empty and exposed. 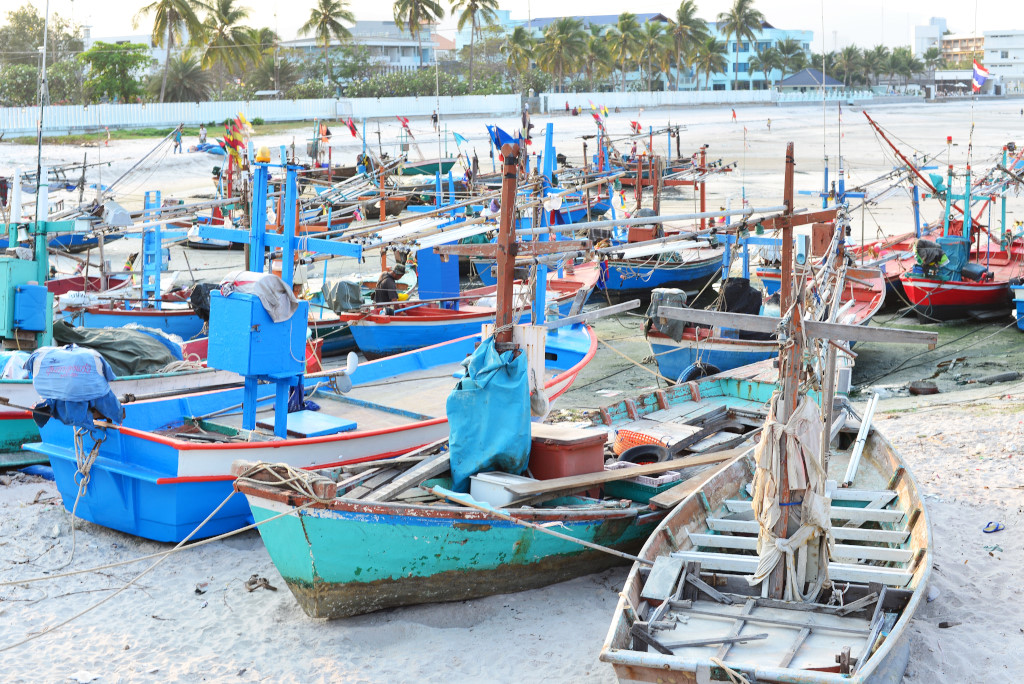 The waterfront running all the way to the luxury hotel developments much further to the north is largely dedicated to boutique hotels, whose gardens and restaurant patios lie abreast of the retaining walls facing the water, with the occasional abandoned-looking traditional teak bungalow interleaving the hotels. 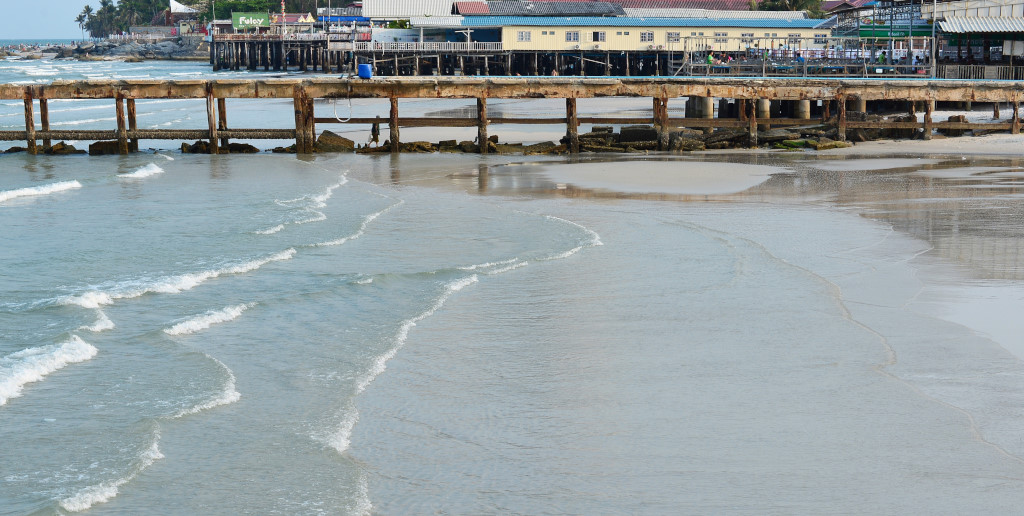 The beach feels very private and inviting, ripe for a good visit, especially considering the water is quite shallow, although it is simply too late in the afternoon for the pleasure. Sandy trails joining the beach and main road occasionally appear between the retaining walls. Walking back southward to the town centre, I pass boutique hotels less successful than those I could see from the beach, but then without the privileged location. 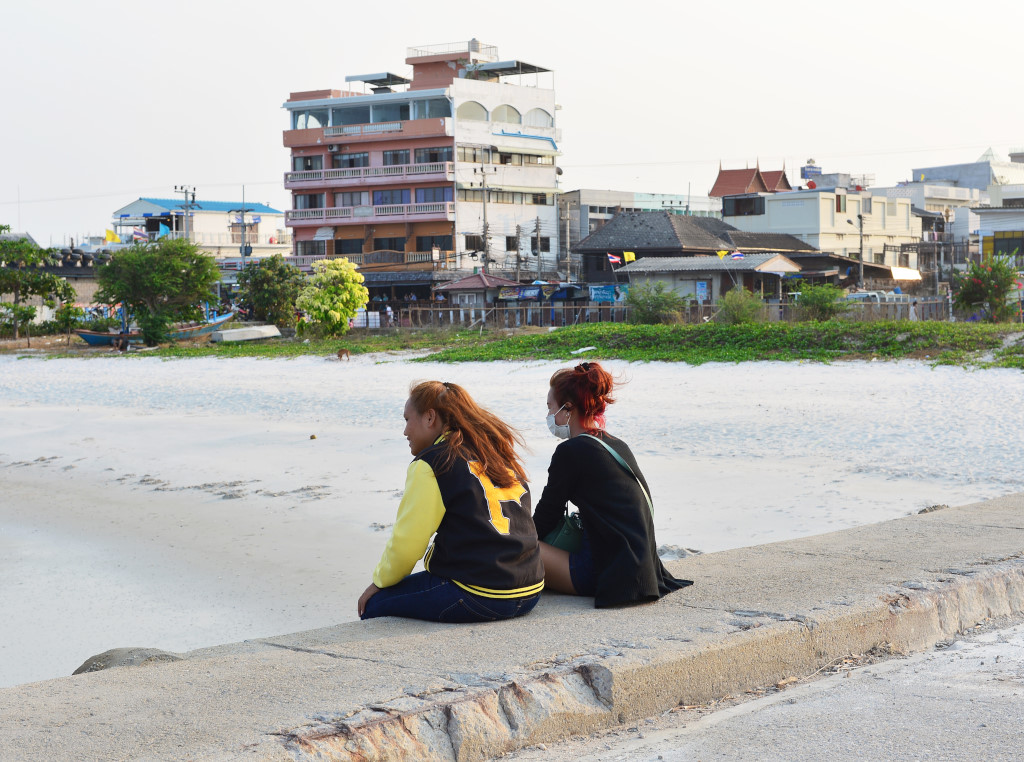