As usual, I leave the hotel room far too late, although at least I leave the room in proper order (for once). Given that I am traveling for a longer period of time, I really want to keep my costs down, and Bangkok is not the cheapest place in Southeast Asia. I am trying to avoid sit-down restaurants of even the simplest nature, although snacking on small items on the street adds up quickly too.

It seems somewhat absurd to have to define a trip around such trivial concerns, but such are the realities of traveling over the long term. So, rather than eating at my habitual café across the street, I opt for … the friendly Isan grilled chicken place a few doors down from the hotel where brunch costs even more, and isn’t necessarily that much more memorable, comprising of parts of a skinny fowl grilled to imperfection, and a papaya salad with some tiny crab legs and a bit too much chili, the salad improving considerably when both are removed. 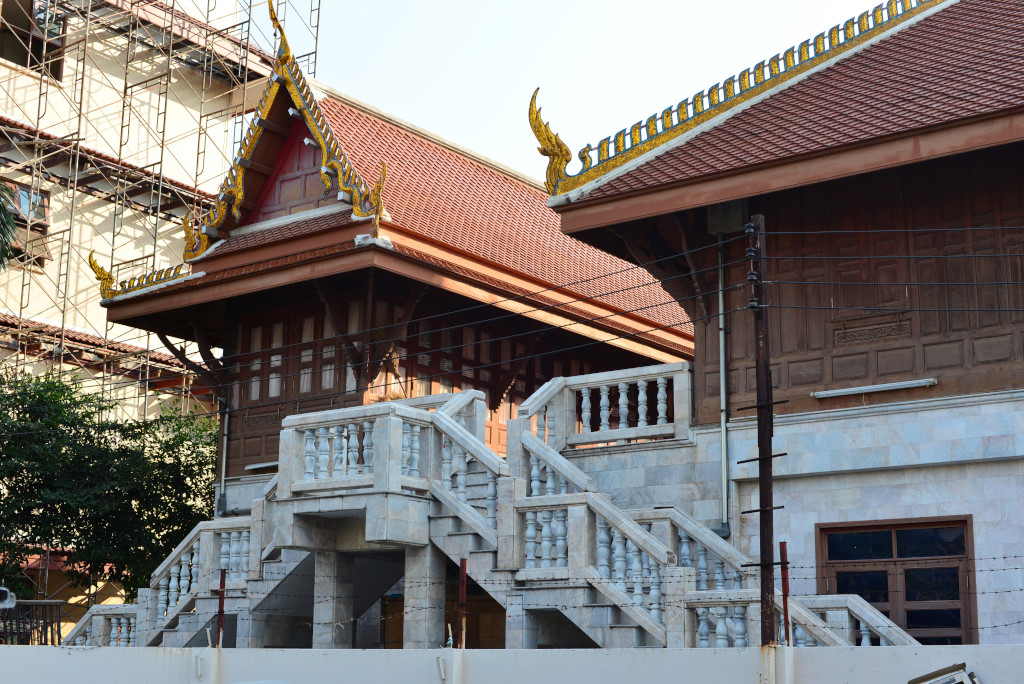 Today’s trip to the Dusit Palace Garden involves traveling in the direction of Bang Sue, the changing at Mo Chit for the line running over the Victory Monument, another milestone in Bangkok urban sensibilities, a phallic structure erupting from a large traffic circle to celebrate some military event or another, and yet another excuse to pour lots of concrete. 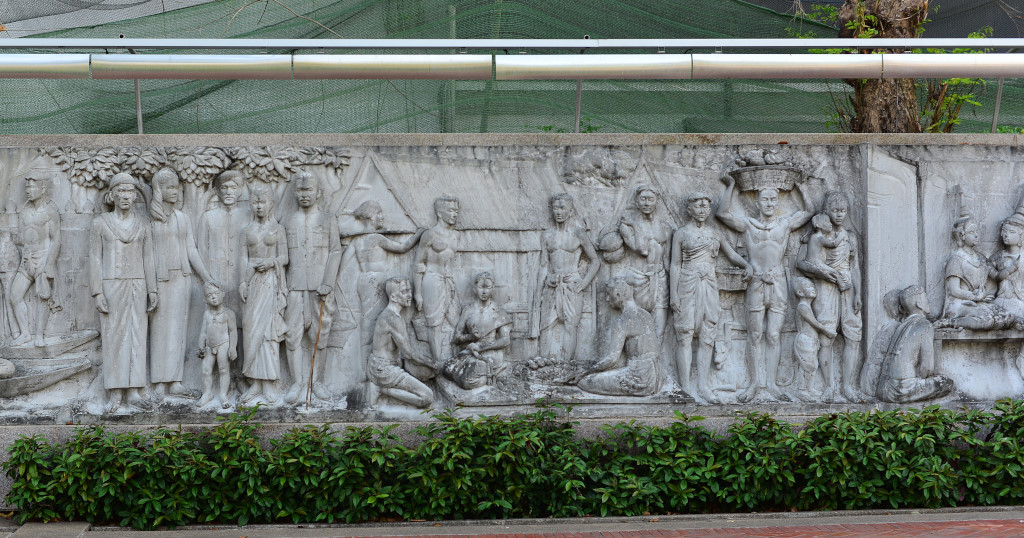 Happily, quite a few buses head west along Thanon Ratchawithi towards the royal complex, and so soon I am on a bus and lumbering towards my destination, although no, I did not want to get off at the zoo. Another walk, then down a lane towards the gate, which has been opened only slightly. 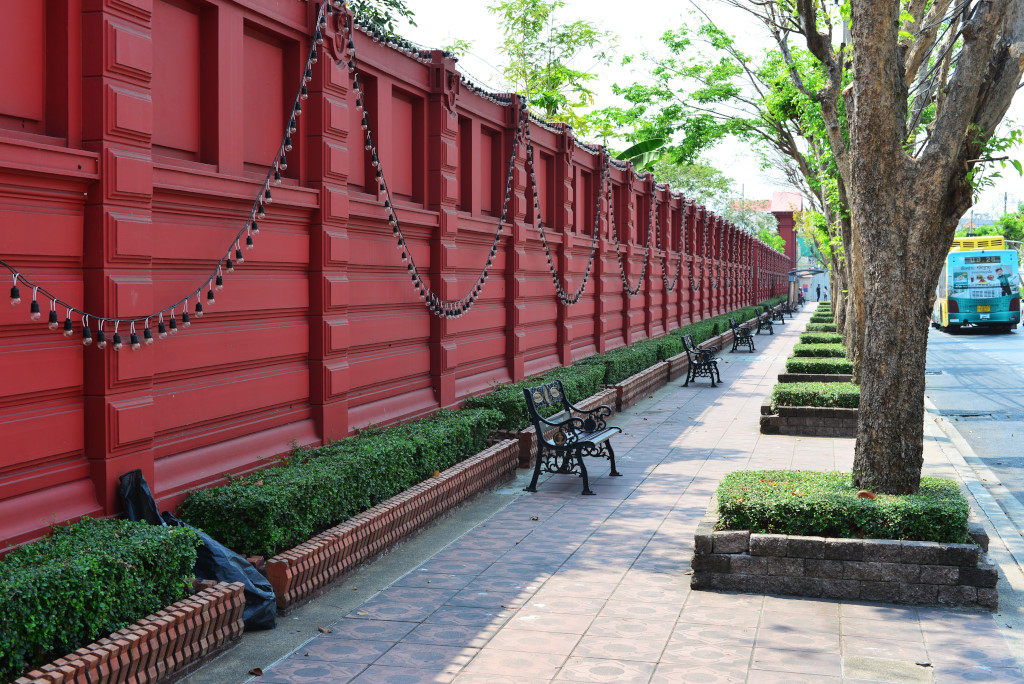 A German couple is standing next to the entrance, looking somewhat disconsolate. The place is closed? Really? Are you serious? I came all the way here after planning to spend the day at the Dusit Palace gardens and they are closed? So what’s the reason today? ‘They are closed on Mondays’ he retorts drily. I checked the attractions in the book, checked out how to get here – but conveniently failed to check the opening times, figuring the guard yesterday would have informed me, which he of course did not. Then again, making that assumption was a bit of a stretch, considering the soldier barely spoke English. 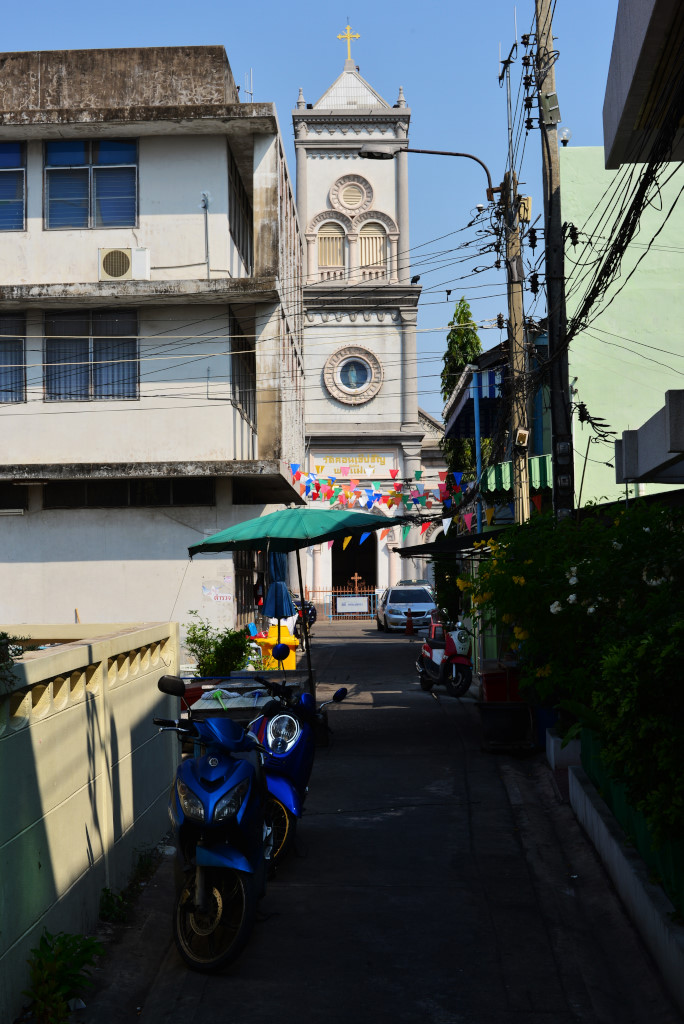 So, here I am, having to make alternate plans yet again, because the day has been shot due to some minor detail. I exchange small talk the Germans from Munich, just because it helps take the edge off this kind of experience, not least of all because we are stuck trying to navigate this big city with public transport, utterly fed up with the experience of dealing with taxi and tuktuk drivers. 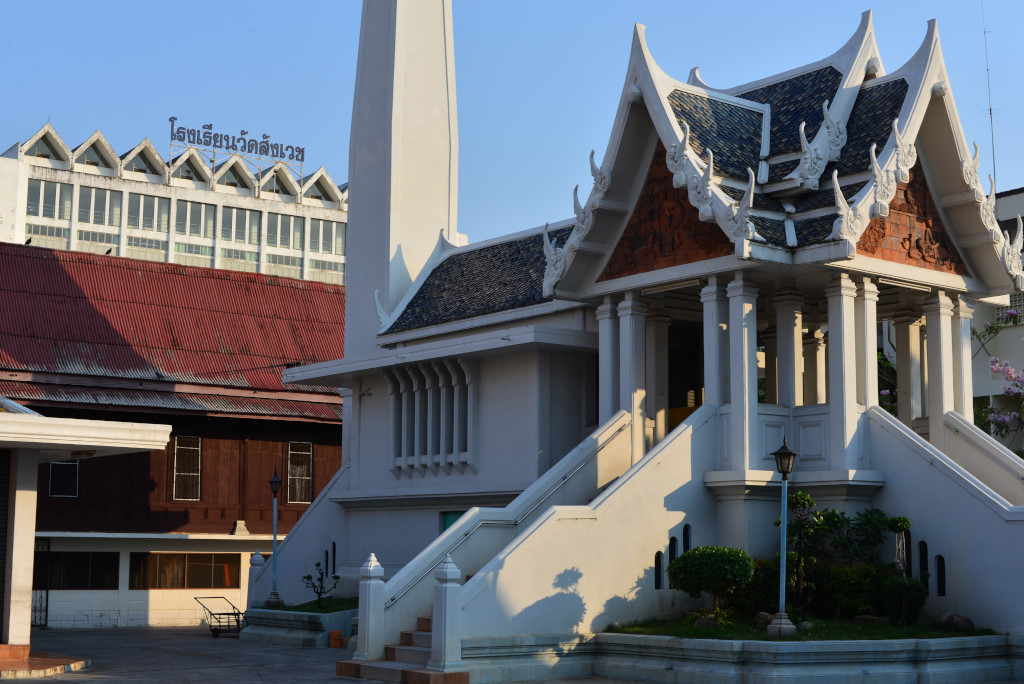 I explain to the Germans how to get to the Jim Thompson house, which is in the area of Siam Square, and I would for that reason not even consider visiting. I am heading in a different direction: I will make another stab at the Royal Palace, and the few other stragglers at the bus stop assure me that the 70 bus will in fact take me there. 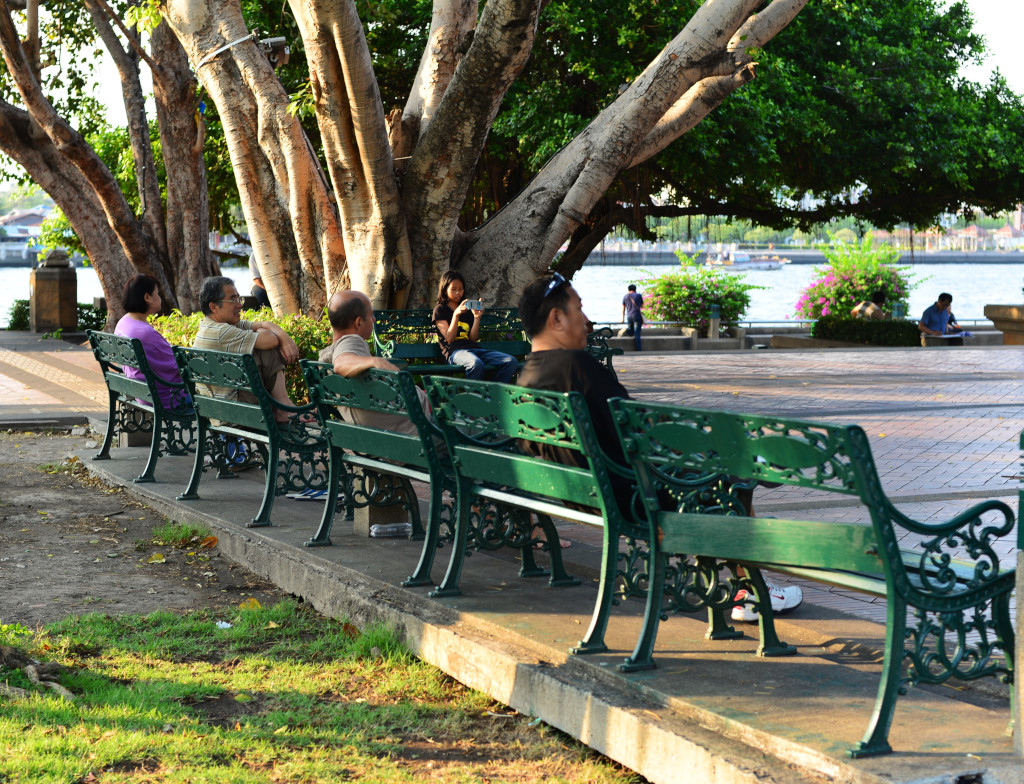 Bus upon bus pass, but no 70. I look at the time, realizing that if the bus doesn’t come soon, I will again be arriving at the Royal Palace as it is closing. I flip open the travel guide again – the hefty entry to the Royal Palace only includes the Dusit Palace attractions on the same day, which would mean I would have to see both on the same day. Sigh.

I should just postpone the visit until tomorrow, and find something else to do instead. The best option would probably be to walk over to the Phra Sumen fort, then backtrack into the area east of the Democracy monument to see the Golden Mount and the neighboring area. Trudging reluctantly past the uniformed school kids, then down Thanon Samsen, I weave into the narrow sois that radiate away from the main road.

A different world opens up, much more hospitable, warmer and more inviting than meets the visitor on the main streets, old people meandering along on bicycles, children playing, cars parked at odd angles, almost no traffic, the home fronts abutting the lane, somewhat unkempt and simple, but beholden to small acts of whimsy. A flurry of small plants screen the wooden bungalows leading along the alleys to the small ferry jetties, even smaller passages intended for nothing more than pedestrians and the odd motorbike.

Surprisingly, the alleys occasionally mouth on a few Christian graveyards and small plazas with churches, pictures of saints and other Christian iconography visible in peoples’ homes. There are no large buildings, few people, next to no traffic, and most of the people I pass smile and wave, a very different experience from the continuous motion and torrent of people flowing along the main roads. 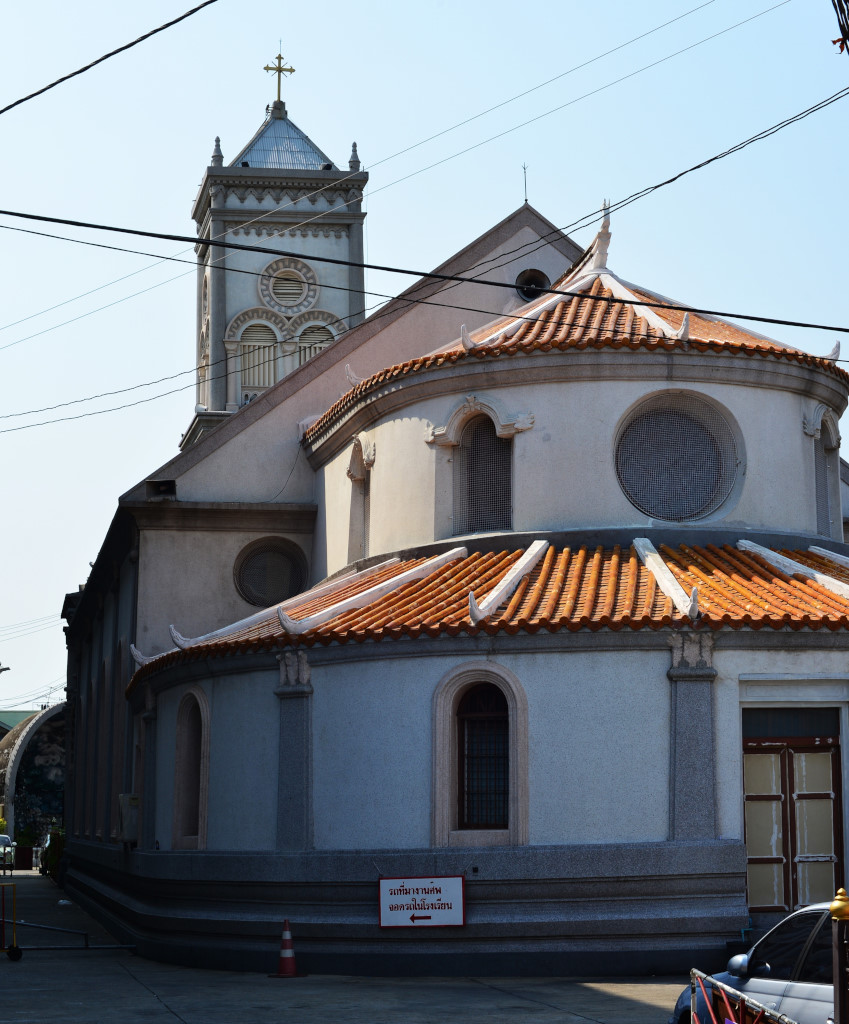 I weave through the alleys, appearing momentarily at the waterfront, small canals often feeding into the river itself. Independent passages run directly alongside the river, often tree-lined and with decorative walls segregating the paths from the residential properties inside. 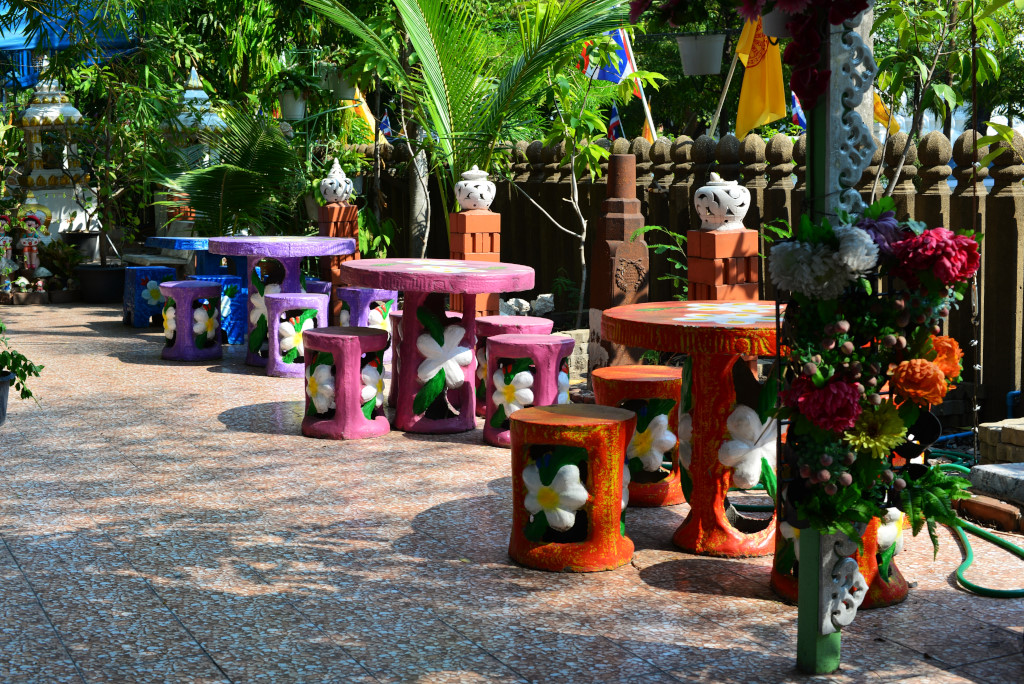 Whimsical childlike scenes relating to Buddhism are enacted with miniature sculptures in small copses carved out of the temple gardens at the Wat Rachathiwat Ratchaworawiharn. I wind my way back to Thanon Samsen at a leisurely pace, eventually ending up in the café at the National Library, unsure really of how close I have gotten to Phra Sumen fort.

Not even close, it turns out, so it’s time to accelerate the pace! A road winds through a forested lot to the royal barges which visitors can look at from a distance, but apparently photography is not permitted, although it eludes me how such activity could constitute a security risk. The cable-stayed Rama VIII bridge adds a modern element of drama to the otherwise intimate environment of the Chao Phraya riverside. 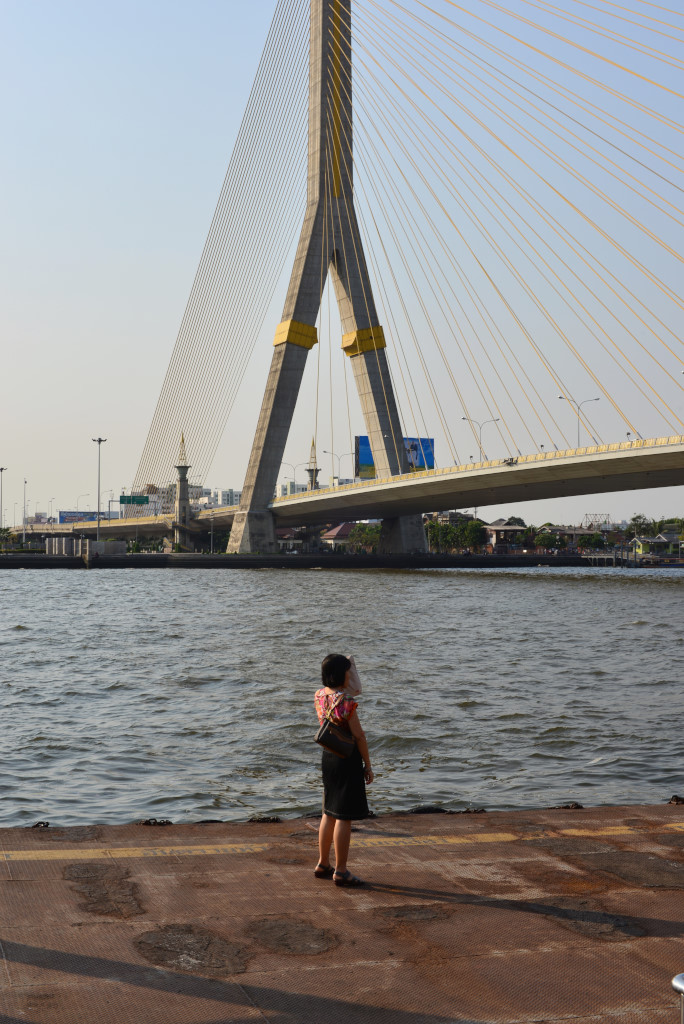 The fort is a simple whitewashed affair with crenelated turrets capping the mouldering white walls looking out over the manicured riverfront gardens, the visitors an odd combination of backpackers, hippies, seniors and local malcontents. I am eyed somewhere with curiosity, somewhere even with suspicion as I jockey around the park, looking for good photo opportunities. 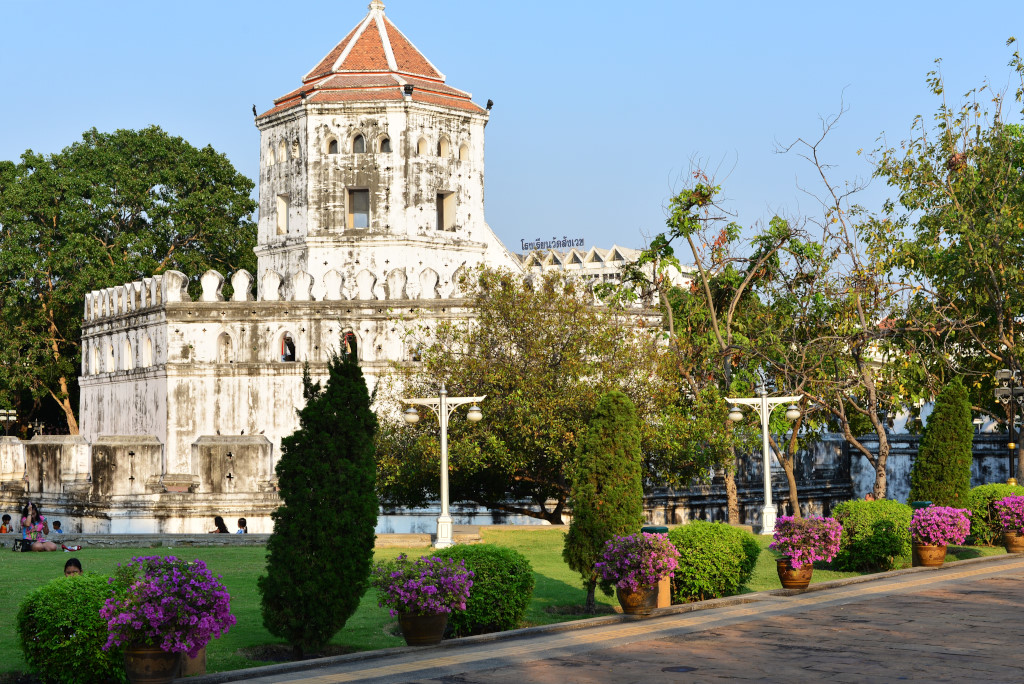 Thanon Phra Athit runs southward towards the area of the National Museum and givens the much more plebeian Khaosan road immediately to the east a decided run for its money, with its funky coffee shops and restaurants curiously reminiscent of Thai affections, rather than driven by farang aspirations. The alleys hide a number of budget guesthouses almost universally full, the receptionists relatively indifferent to my requests for information – and why wouldn’t they be, considering the demand they experience. 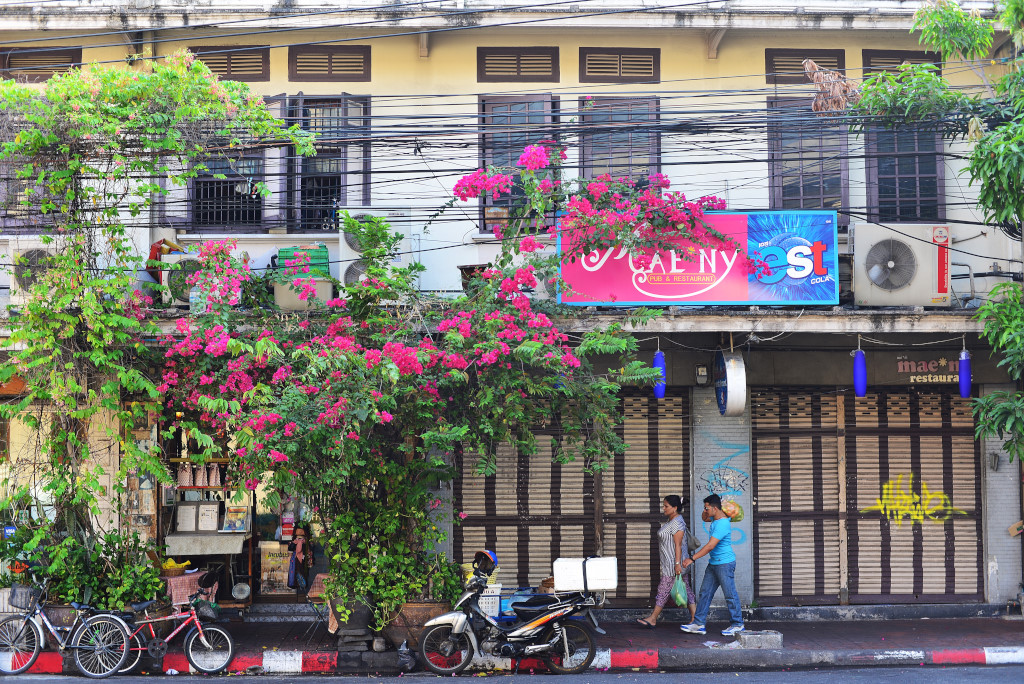 As much as the area is hip and central, staying here means also having to conform to some degree to the tsunami of other independent travelers that crowds the tiny alleys, feeling tolerated by the hotels for the privilege of being able to pay hefty rates (for the budget traveler at least) for the often very rudimentary rooms. 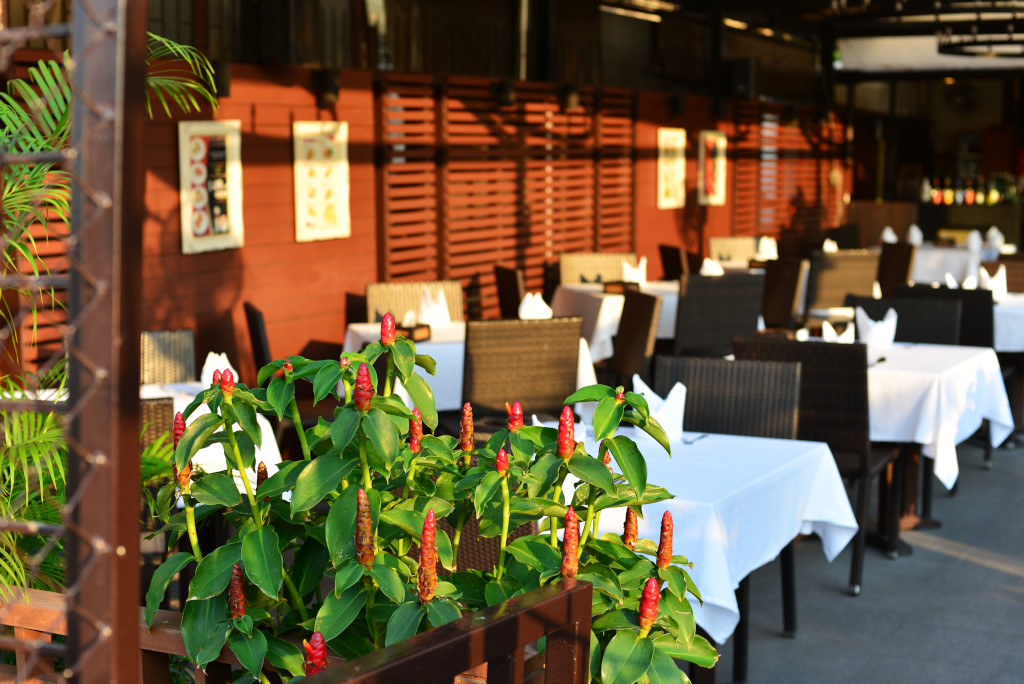 However, some of the houses are well-built stone affairs, with all the basic amenities in clean rooms, and due to the location in the back alleys near the riverfront, very private and quiet. But in the end I am not sure I would move here. Despite the long trek, I love the privacy, quality, space, low cost and sense of both relative luxury but also more authentic Thai feeling of the area I am staying in.

The light is falling as I reach the bridge just north of the National Museum. My plan had been to walk all the distance southeast towards the Golden Mount, but as it is getting dark, I should probably think about an alternate activity that doesn’t call for daylight. How about visiting Sukhumvit road? I had really only seen the area to the west running along Ploen Chit road, not that it was particularly memorable. 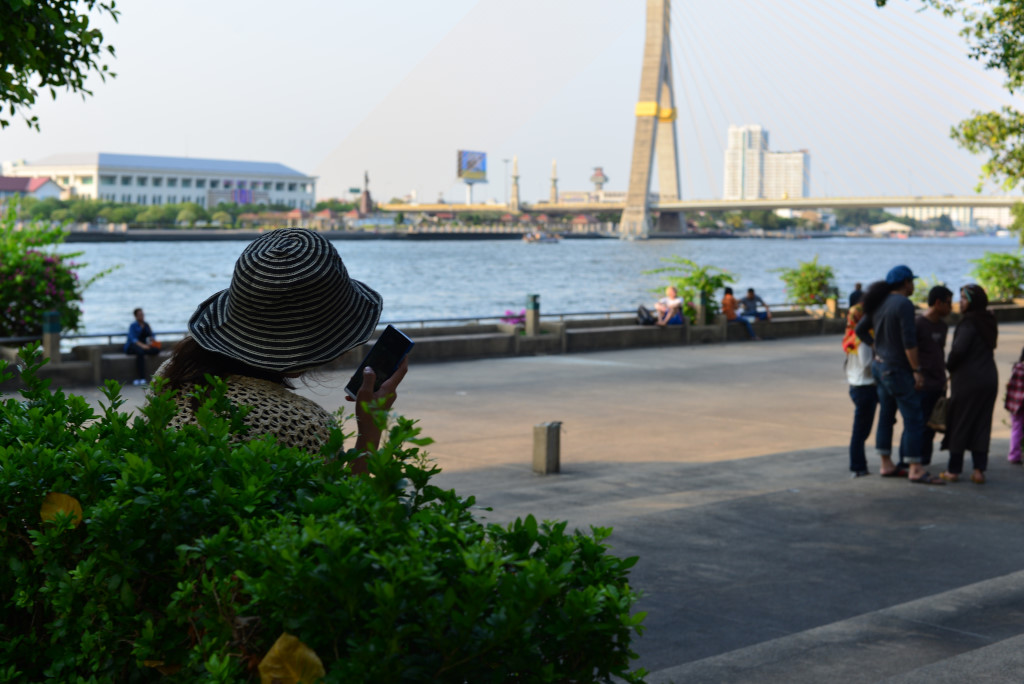 I should really walk back to the boat jetty and take the boat back to the Saphan Taksin metro station, then make my way up to the Thong Lo station, which seems to lie on the eastern periphery of Sukhumvit, then walk back towards the metro line that runs up to where I am staying. All this strategizing!

From a closer inspection of the signage at the jetty, it turns out that several different ferry services are available, the regular ferry costing 13 baht, and the ‘tourist’ ferry which I took the other day 40 baht. I really have no idea what the difference between the two boats should be, as they are exactly the same size, both overloaded with tourists, and docking at the same jetties. 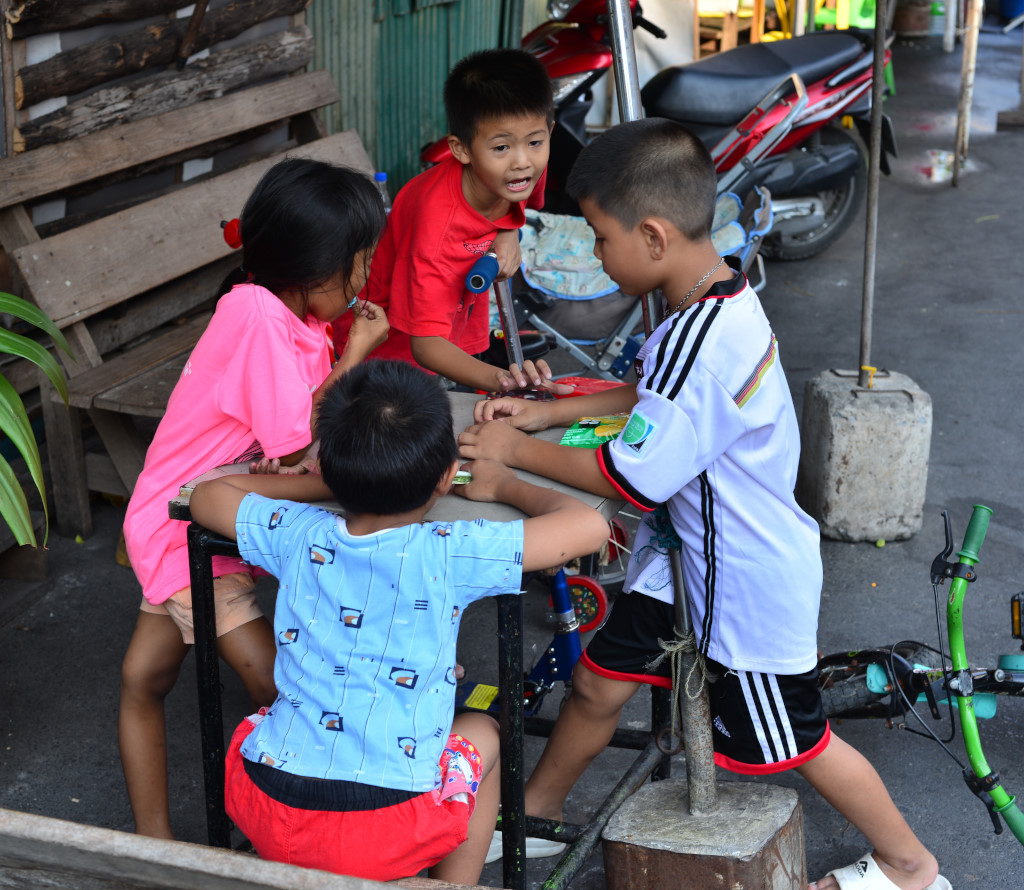 The seating area that occupies the bulk of the hold is packed with seated and standing passengers. I imagine it is a better idea to stand on the raised bow, although I am eventually instructed to enter the seating area with the rest of the passengers.

An interesting episode occurs, in which the older man of vaguely European origin points his Lumix in the direction of the monks next to me, gruffly rebuking my comment about monks not always being happy about having a camera pointed at them. 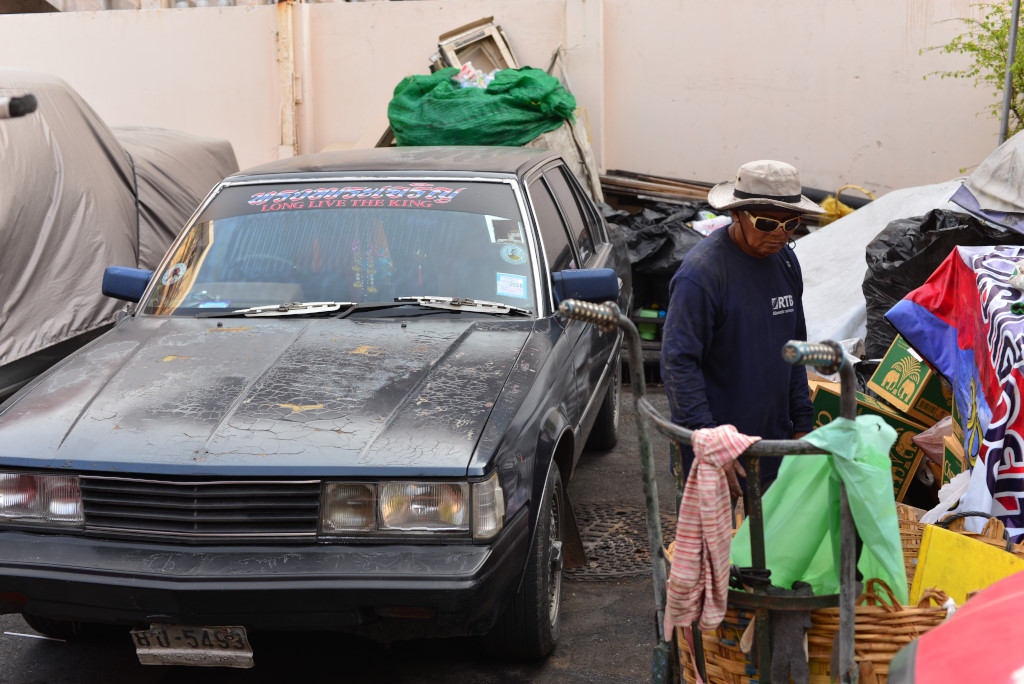 ‘I do it all the time’ he indicates, ‘when I asked I was told it was OK’, but his defensive tone would indicate that he is not quite sure himself. Ironically, one of the monks seated on the bench behind us physically pushes the person on my right aside, motioning that the space should be cleared for the younger monks standing against the wall behind us. 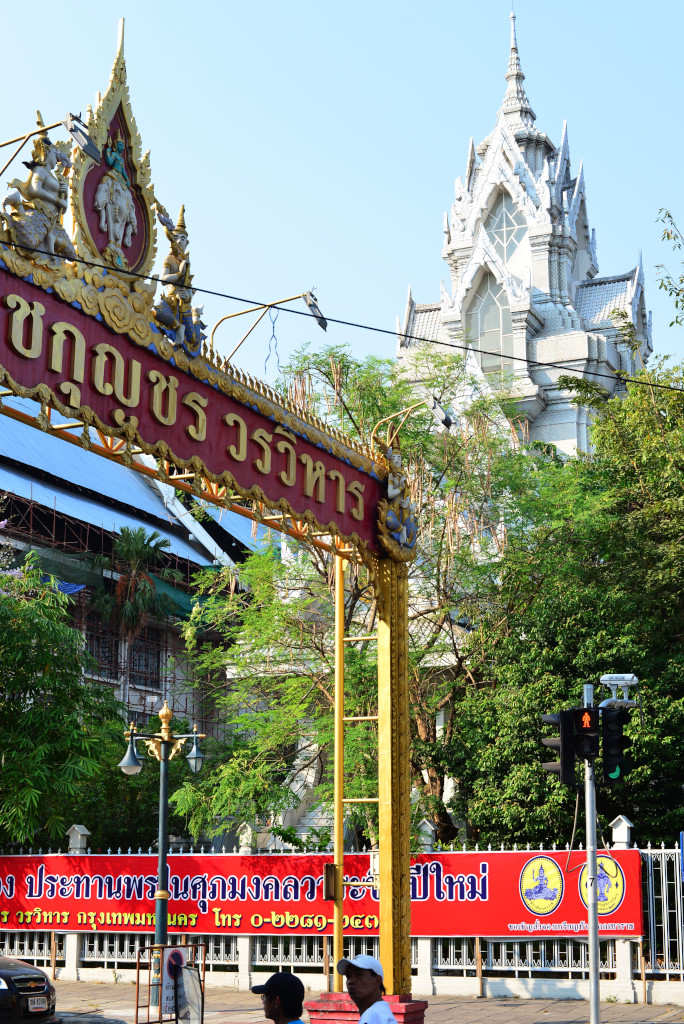 ‘There you go’ I tell him, ‘don’t assume you think you can do what you want here’, and then he disappears, not one to be receiving instructions from the likes of myself. But the younger monk for whom the space next to me was cleared is apologetic, in clear and precise English making polite conversation, although my comments about perceived improprieties towards monks are met somewhat impassively.

I cannot believe the number of people on the metro today – the numbers are simply staggering. Drenched in sweat and squeezed into the corner of the train, I can hardly say I am in an ideal mindset. This is not a place I want to be in, and descending finally towards the street at the Thong Lo station, I realize that the faster I get through this neighborhood and back to my hotel, the better. 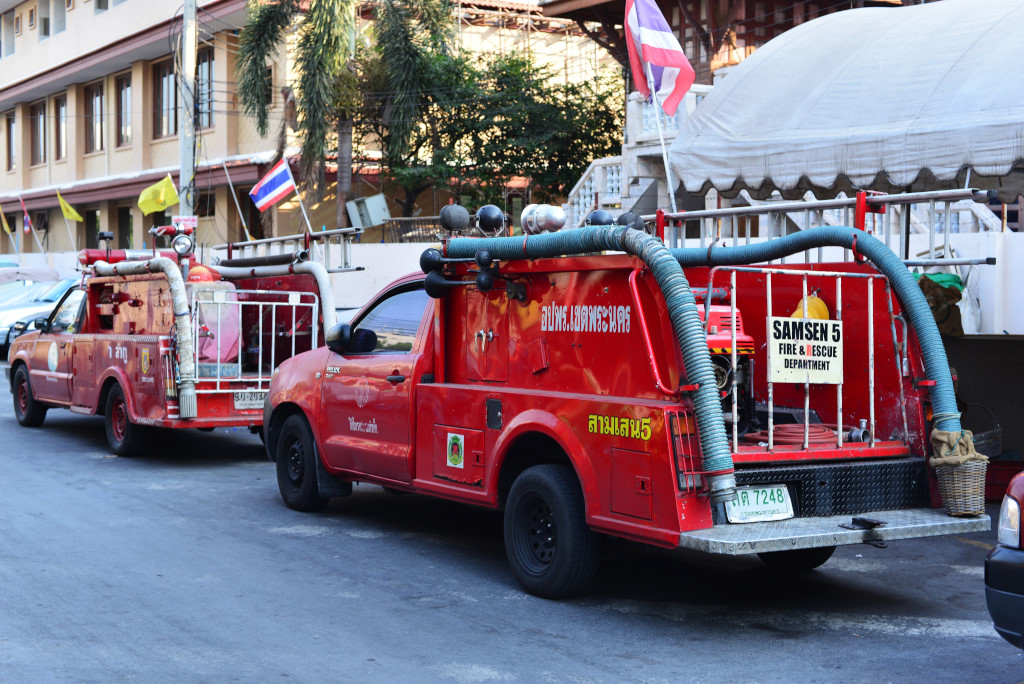 Thanon Sukhumvit is also tunneled through a wall of glass and concrete towers, mostly luxury hotels and condos, with the odd office complex thrown in, on the ground level massage parlours of various calibers, fancier furniture and interior decoration stores, restaurants, cafés and bars of various pedigrees, the more expensive ones contrived as most other luxury services here. 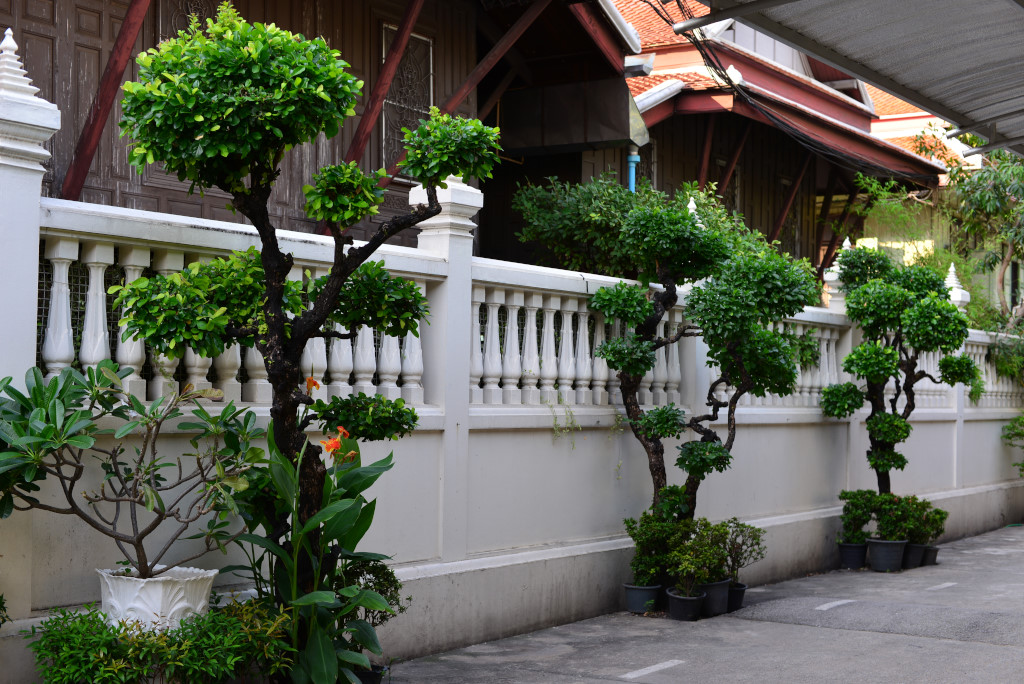 The traffic is horrendous, a moving gridlock, occasionally bleeding cars into the adjoining soi, laced with smaller restaurants and bars, largely Japanese by the looks of it, one wrong move into the street and my short life will come to an untimely demise, the aggression I see here on the road putting to rest any notions I had about Thai being courteous drivers.

Then again, if I had to put up with being here I would probably go out of my mind. Not to forget the horrendous heat and smog! I would never want to live here – I can appreciate that this city has a higher standard of living than pretty well anywhere else in Southeast Asia other than Singapore, and that it has by far the most advanced infrastructure and excellent public transport, but despite the sophistication and frequency of the trains, the crowds completely overwhelm the trains. I have been on and off these trains since I arrived here several days ago, and have only managed to snag a seat once. 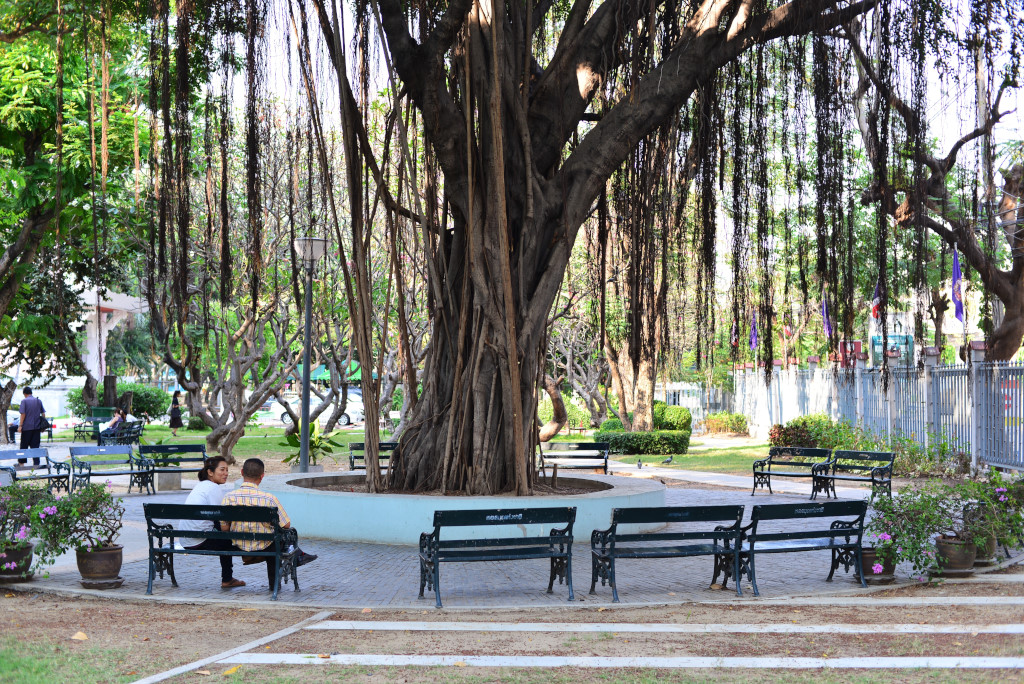