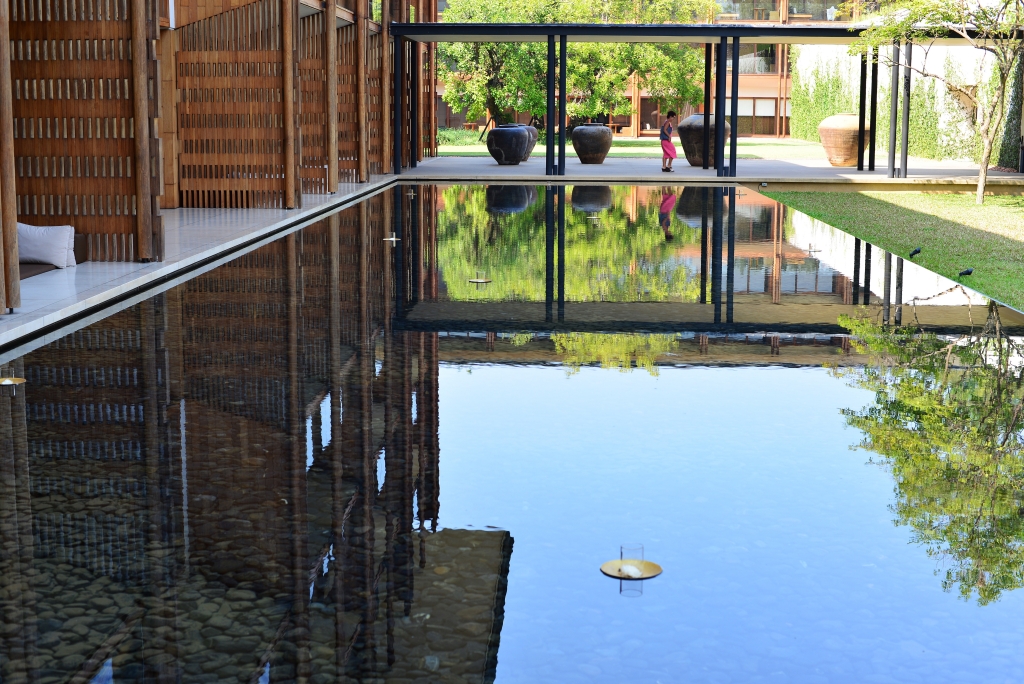 The morning drags out, what with personal business issues and catching up on my journal. And I really need a coffee to function, so walk into the direction of the Tesco Lotus, the small cafe on the preceding side-road being a modest affair, the owner only too happy to make me an acceptable espresso. The road parallel to the Lamphun road is somewhat of a country affair, with open fields and sprawling and somewhat dilapidated wooden bungalows occupying large lots. Of course, the scene would not be complete without the stray dogs lying watchfully in the middle of the road, the impetus to fiercely guard their terrain pathetically impeded with the onset of age. 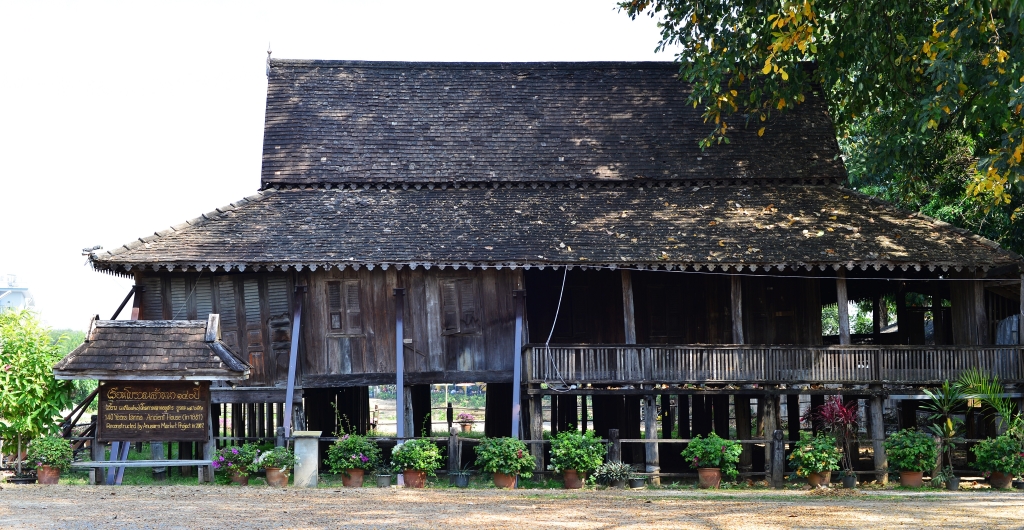 The sunny receptionist is back at her job and eager to assist, in particular, teach me some more words of Thai, which I unfortunately will only be using for another few days. Despite the pollution, I am quite content to hang off the back of the songthaew and feel the breeze on my face, realizing I have missed the New Bridge as we turn onto the Nawarat bridge. The elderly chauffeur collects the 15 baht fare and from his honourable demeanour can only represent a stark contrast to that of the tuktuk drivers. 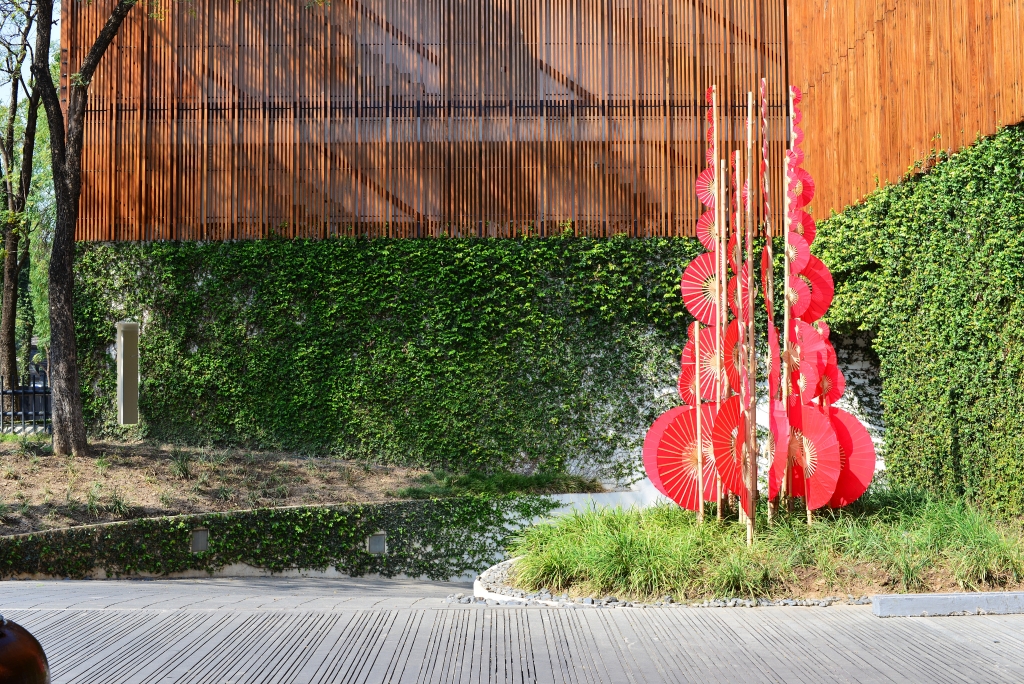 Since I had wanted to traverse the town on foot from the New Bridge, I walk down past the Governor’s Palace, the inconsequential small businesses and budget lodges whose restaurant terraces face the street, then the gigantic wood slat and vine-covered facade of what I take to be an incongruously placed warehouse complex. Somewhat unexpected is the sculpture of cascading red fans at the concealed entrance that I see a group of people wandering into. Curious, I follow the group and rounding the corner, enter into an entirely different world, obviously that of a luxury hotel, but of an entirely different caliber with respect to what I have seen before here. 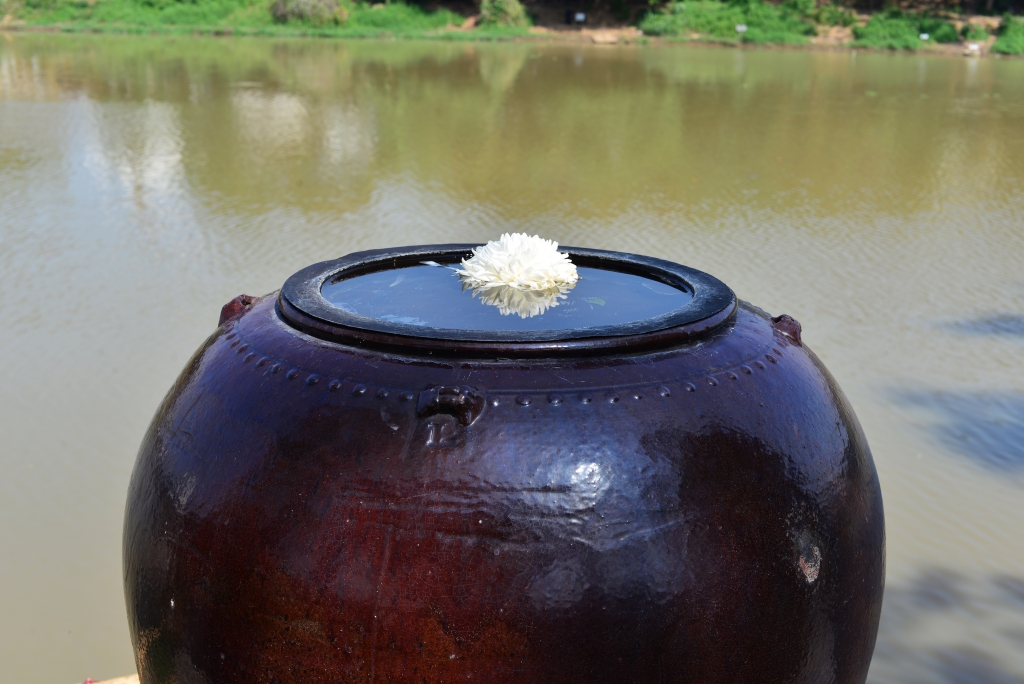 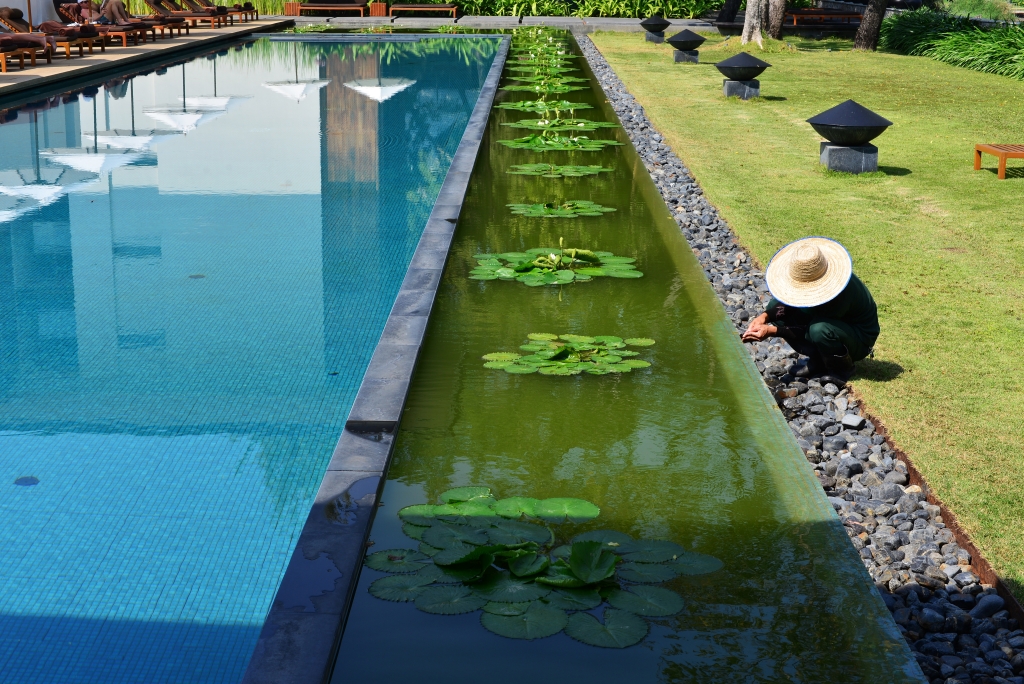 Very elegant, very impressive – and yet when I check the hotel website for pricing later, I am stunned to see that the rack rates for simple rooms, albeit elegant and well appointed, but perhaps at most twice as large as my current room – run for some $1,500 a day – really? For nothing more than a subdued but essentially functional Scandinavian minimalism? I am paying $35 a day and think it’s too much. Because you get a view of the river? Seriously? 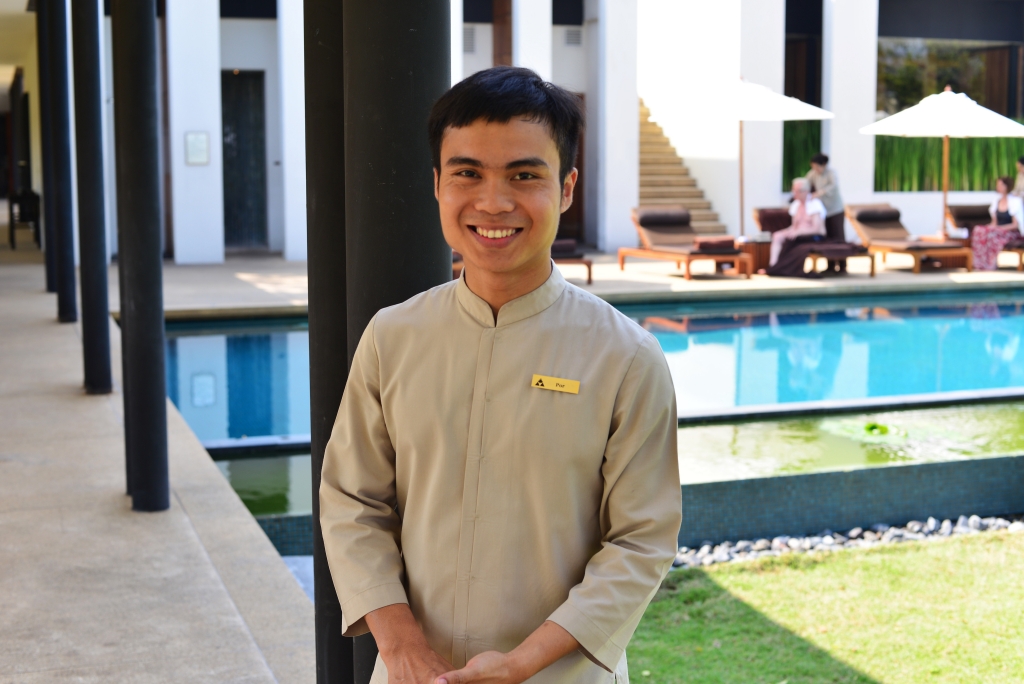 The road that extends west from the new bridge, Thanon Loi Kroh, is home to a very different sort of personality, namely the Thailand of endless massage parlours alternating with cheap hostels and hotels, travel agencies flogging package tours to the attractions of the region, bedraggled bars, and a general atmosphere of borderline desperation and sleaze. Before me lie the worn, hardened expressions of the women clustered in front of the massage parlours, calling to me with their mechanized femininity, to the tatty, aging backpackers prolonging their drunken dissipation by one more day, week, month or year, and the borderline ancient men, possibly financially far more settled, their creaking bodies lusting for one last chance with a woman, any woman … All I need is to add a few years onto my own life and I will probably fall into the latter category – better get my visit to Thailand out of the way and make sure I never come back!

And for the moment, I just walk onward with view to ensuring I never visit this road again, not that the street doesn’t feature the kind of establishments that are fairly typical in tourist spots in the country. The debauched allure of Thanon Ratchamantha finally dissipates at the school just before Thanon Phrapoklao, which runs north past Wat Chedi Luang. My thoughts are with the younger and relatively clean-cut backpackers on a budget obliged to stay in some of the sleazier places. 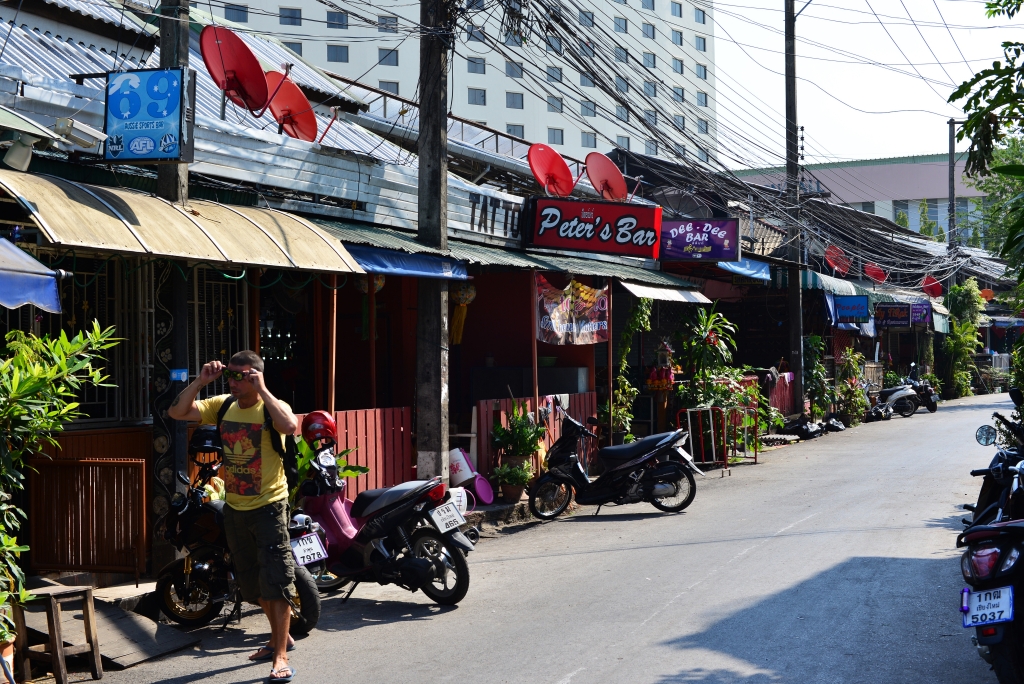 Closer to Thanon Rachadamnoen, the town centre returns to its quiet serenity, other than the line of tour buses, red songthaews and tuktuks waiting for business.  The neoclassical facades of the cultural centre and Lanna Folkloric museum face off over immense tiled dead zones, the gardens of the latter devoid of any life, the darkened entrance drawing me hypnotically to its threshold.
The museum features an elegantly curated vision of the Lanna people that characterize northern Thailand, Chiang Mai being the cultural capital. Exhibits include the means of expressing devotion, religious architecture, cosmology, the handicrafts, lacquerware, the food stuffs, the patterns, materials, and techniques for creating textile art, and so on. I could have bought a package ticket for the museums but don’t feel like it, Chiang Mai’s cultural sensibilities being far too cosmetic to motivate myself to find out more about the place. 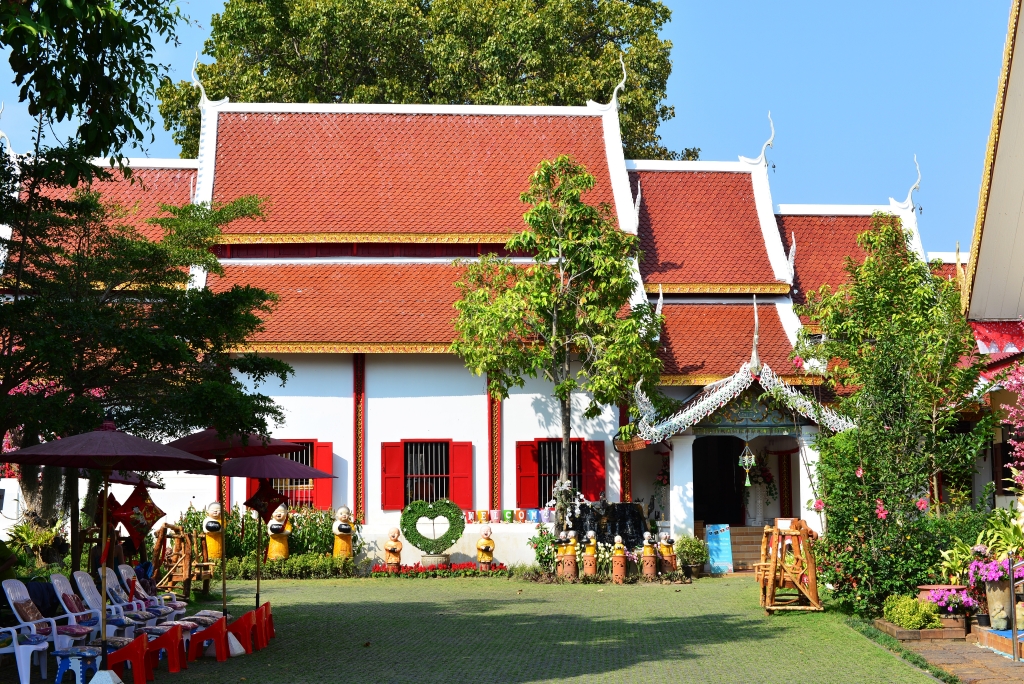 The Chiang Mai museum would simply chew out history over the centuries of local royalty, which I have already gotten a mouthful of in Ayutthaya, Lopburi and Sukhothai – except that those archaeological sites are truly old, while there really is no visible ancient legacy here other than the partially restored giant stupa at Wat Chedi Luang and some much smaller individual chedis at some temples throughout the city. 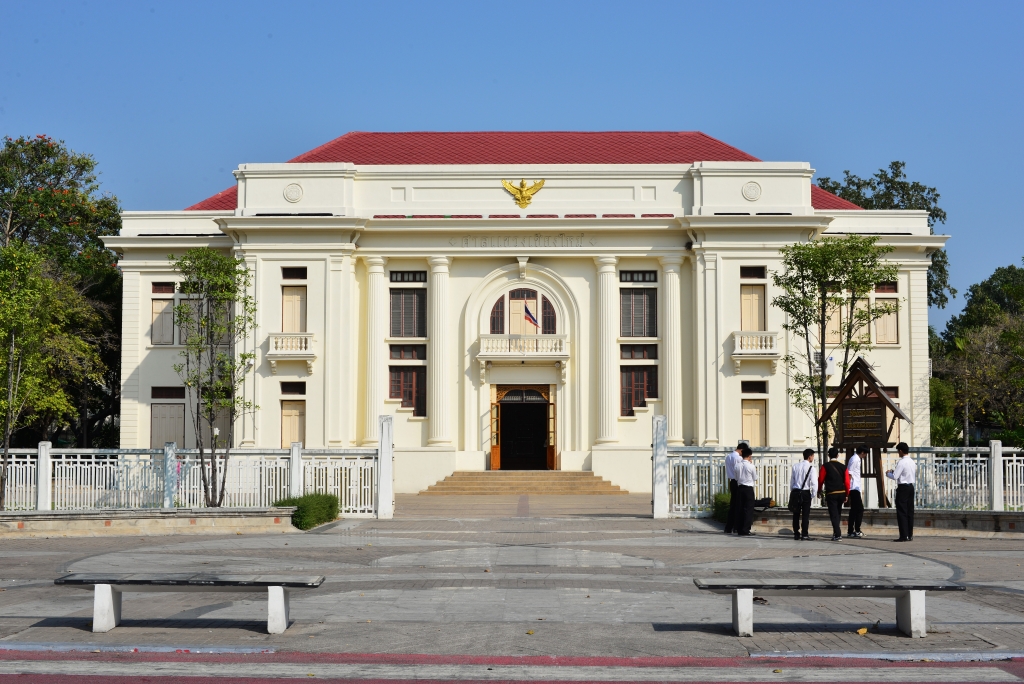 Upstairs at the cafe just north of the cultural centre, the beaming young German woman from Offenburg tells me she is wrapping up a four month trip around the world, well, to Thailand, Hawaii and Australia, to be specific, and as much as she has enjoyed it, she is also looking forward to going home to her illustrious part of the world, with so much to offer and see in its own right, benefiting from an absolutely stellar location in central Europe, so close to Switzerland, France, and southern Germany. Of more practical importance is her explanation as to how to take the red songthaew to destinations somewhat removed from the core of Chiang Mai, advice I need inasmuch as I would prefer visiting some of these spots in as economical a manner as possible. 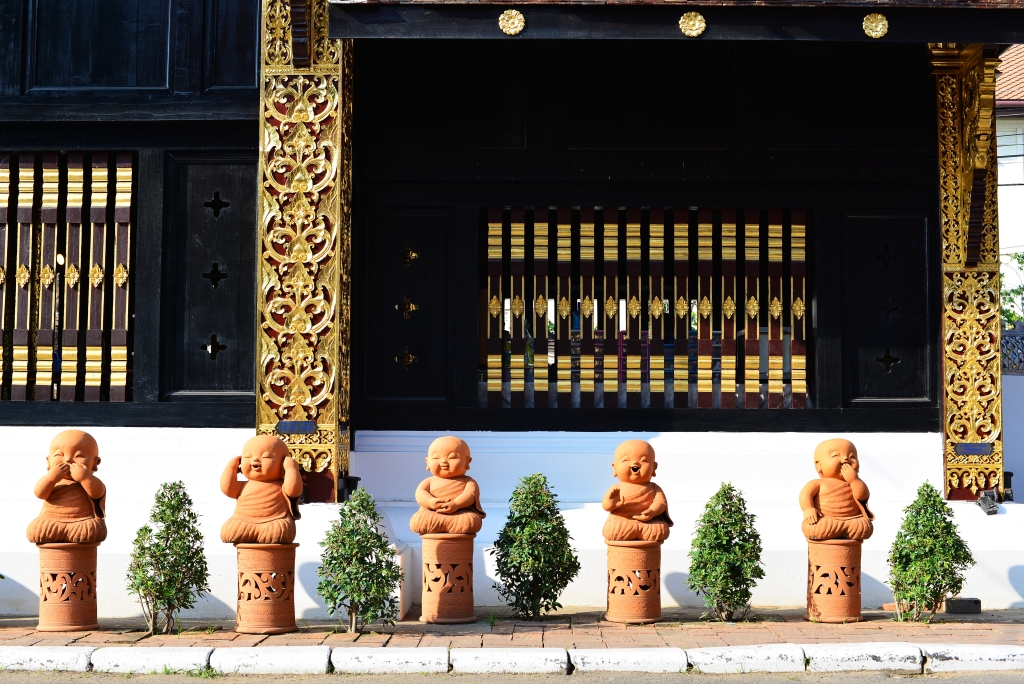 Then down to the task at hand, writing postcards to some of my far-flung friends, and finally, in the falling afternoon light, the trek eastward, weaving through the smaller soi in the centre, with their modest but tasteful budget hotels and intimate cafes, another temple complex I don’t even bother trying to find the name of, apartments and long-term residences rounding out the complete and utter devotion this city has to servicing tourists, eventually berthing on the seedier and less salubrious bars and massage parlours closer to the canal. 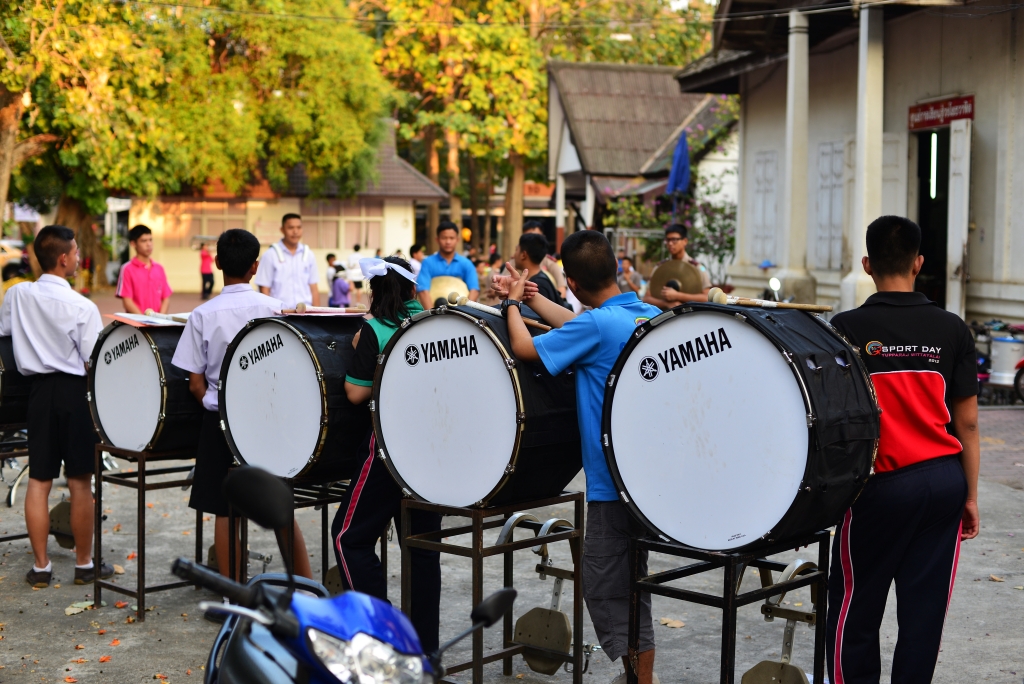 Wandering southward absent-mindedly, pieces of deep-fried chicken hanging out of my mouth as I review the carnival of backpacker haunts ranging from the mundane to the tawdry, and at the Thae Phae gate, into the sois to the south, toward my inevitable destination, the New Bridge, moderately posh five to seven story apartment buildings flanking the serpentine alleys, more mid-range boutique establishments, with their generic restaurants, frangipani and rectangular swimming pools, grizzled Europeans huddled on the terraces, seeking anything but catharsis. 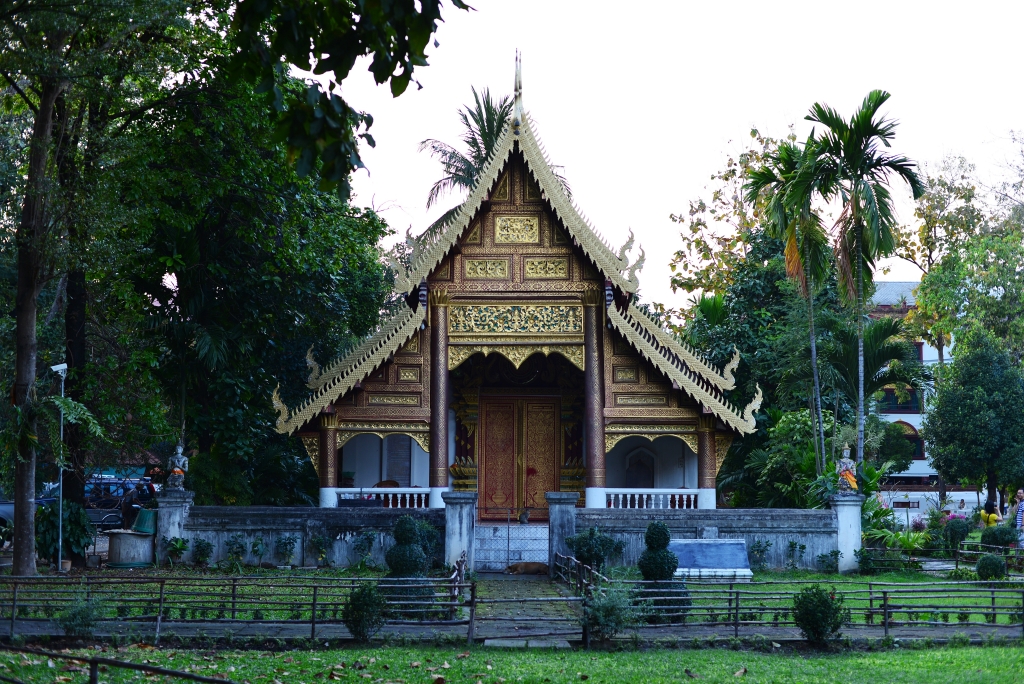 Crossing the narrow bridge, I find it remarkable how the thick smog suddenly dissipates by the water. The air by the river is refreshing, unlike the sweltering toxic soup elsewhere in the city.
Out of curiosity, I stand next to the three people standing on the sidewalk next to the S&P who peer occasionally onto the street but don’t speak with each other. I had fully intended on walking back to the Adventure hotel, but something tells me that they may be waiting for a songthaew, although now at 7 pm the last blue one should long have passed. And yet, there it is, miracle of miracles, and I am off, hanging off the back of the vehicle, the cool refreshing breeze blowing in my hair, the car making good progress now that the traffic is thinner. Not having eaten yet, I descend into the sprawl of roadside eateries past the Holiday Inn, predictably little being of any appeal, then on the patio of one humble enclave being entirely ignored, presumably because the staff would have no idea as to what to do with me. 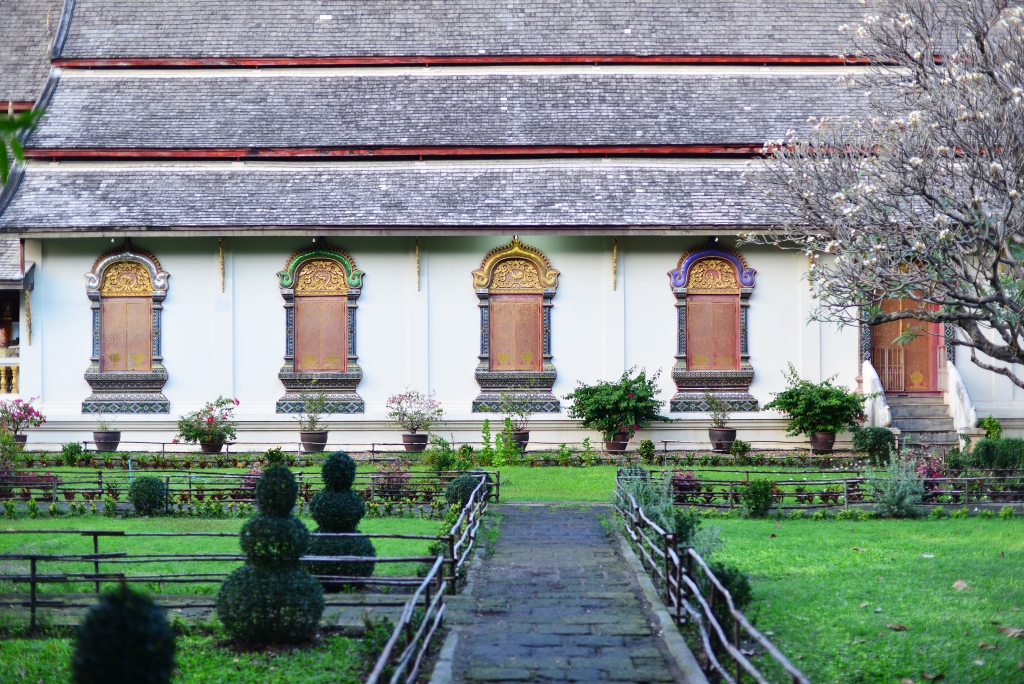 Exasperated, I leave, and cross the street back to my original destination, the salad roll kiosk that at least has pictures of their fare with accompanying prices. An order of five of each for here, and then once I have mopped up the last drops of dressing, one for the road, trudging contently back to the overpass already visible in the distance, weaving delicately around the thick trunks of trees broaching the pavement, then back onto the dirt embankment, and soon I am back in the familiar enclave of the Adventure hotel, seeking out the miniature hall of mirrors that I call home in Chiang Mai. 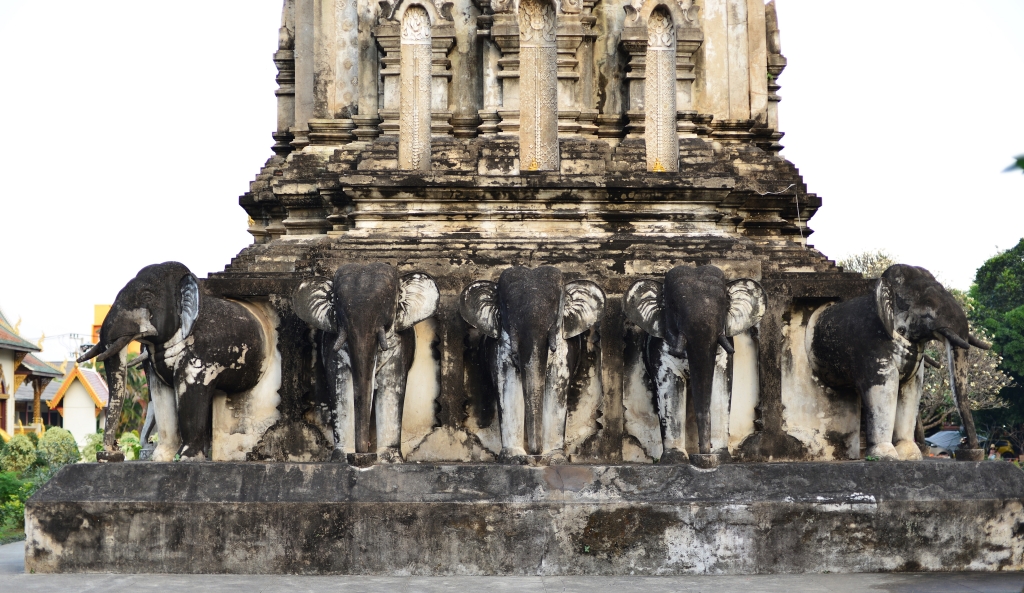