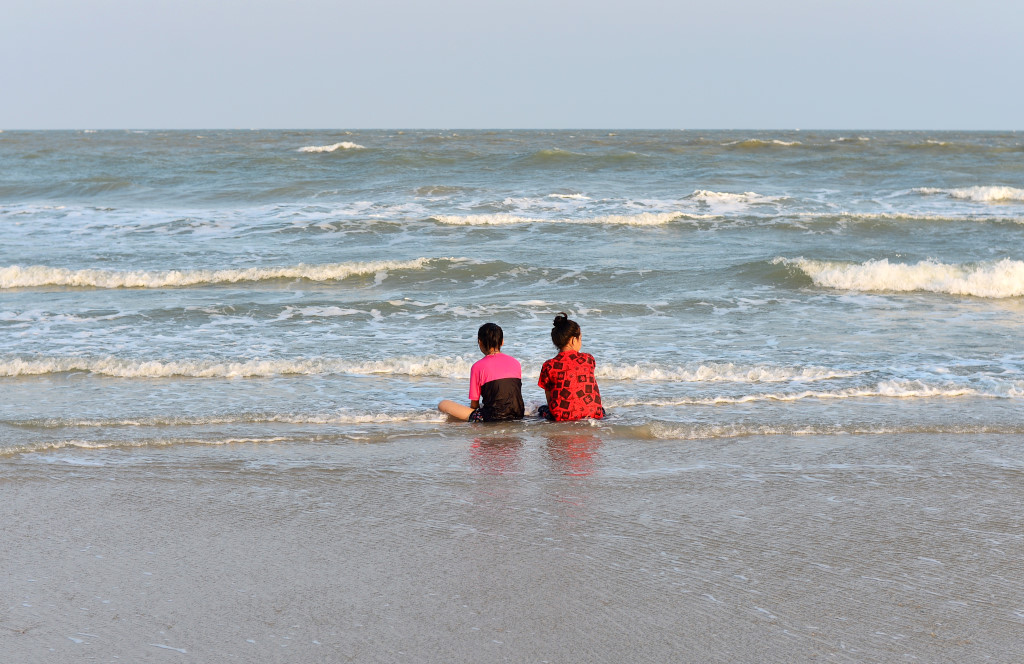 Around noon I decide to make my way out of the hotel and search for some place that may offer local food at a decent price. The heat is already intense, and beyond the women wailing at me from their massage parlours, there is little evidence of culinary splendour anywhere. The back road running parallel to the beach features some seemingly authentic Swiss and German restaurants, which I am actually considering visiting.
As drab as the waterfront urban development tends to be, as welcoming some of the resorts set in leafy compounds farther away from the beach seem to be, quiet, private, and ultimately more attractive than the concentrated, claustrophobic and grimy places nearer the shore.

Little reveals itself along Narathip road until I reach the Moslem restaurant, waking the staff from their stupor to indulge in the incendiary and incredibly flavorful Malay-style curries, rich in curry leaf, coconut, lemon grass and fresh turmeric. The owner of the restaurant confirms that this food is only made by Moslems in Thailand, meaning that the further south I make it in the country, the more in heaven I will be!

A jaunt to the shore, the proximity of the hotel to the water meaning I can comfortably leave everything in the hotel room – or so I hope. It makes little difference if I wander up or down the beach – it is really all the same, other than some of the submerged portions which contain debris and some of the tidal-type pools that form, allowing small children to safely play. 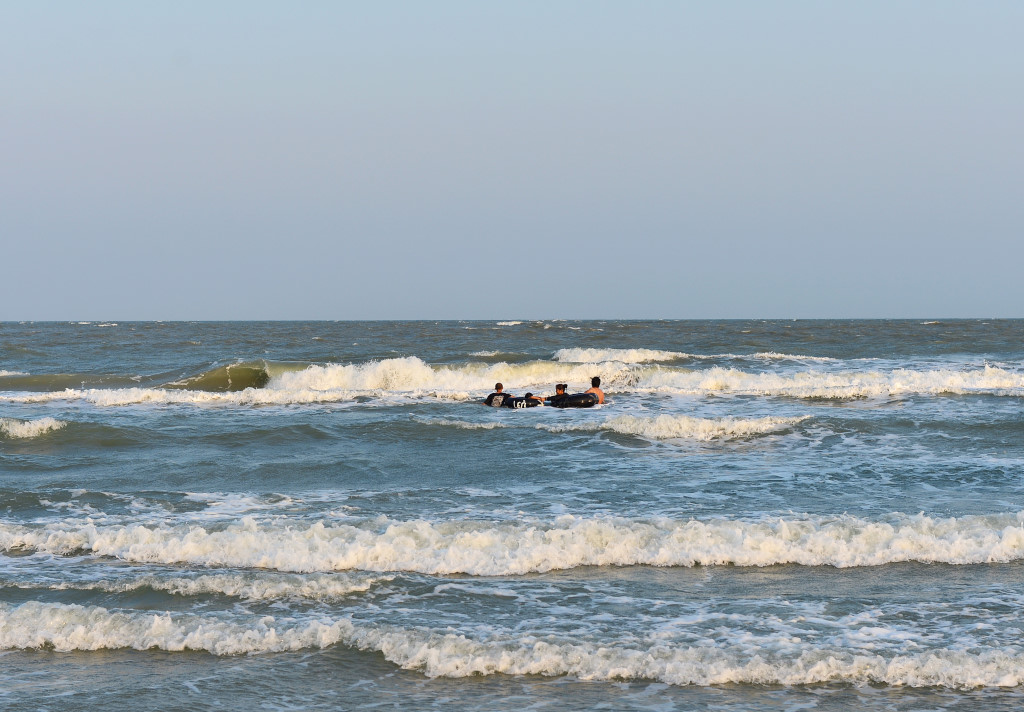 The surf is rough, but only because the sea bottom closer to shore is shallow, although being submerged in the water still requires being somewhat attentive to the breakers rolling in. I am tempted to wade further out, but only to a sweet spot where the waves don’t break, and I don’t sense the lingering tug of undertow. I motion to the adventurous small girls thrashing near me with their inner tubes to stay closer to the shore as I feel the strengthening pull of water towards the sea and the waves crashing over my crouching frame.

The families with children scattered along the beach are relatively sparse, and the grid of beach chairs higher up the shore almost empty, even though this is the best time of day to be by the water, the intense heat having dissipated for the afternoon. The sea-doos are entirely silent, and the remaining banana boats left to bob in the water by the shore.
Groups of slender young men take photos of each other by the water’s edge, the younger boys left to splash erratically in the surf’s outliers. I run into the English couple I met at the Phetchaburi train station again, who have now found the appropriate bungalows to stay in further to the back of the town, where space and privacy is more ample. Initially also not taken by the town, they are now settling in and happy to stay here for the duration of their trip. 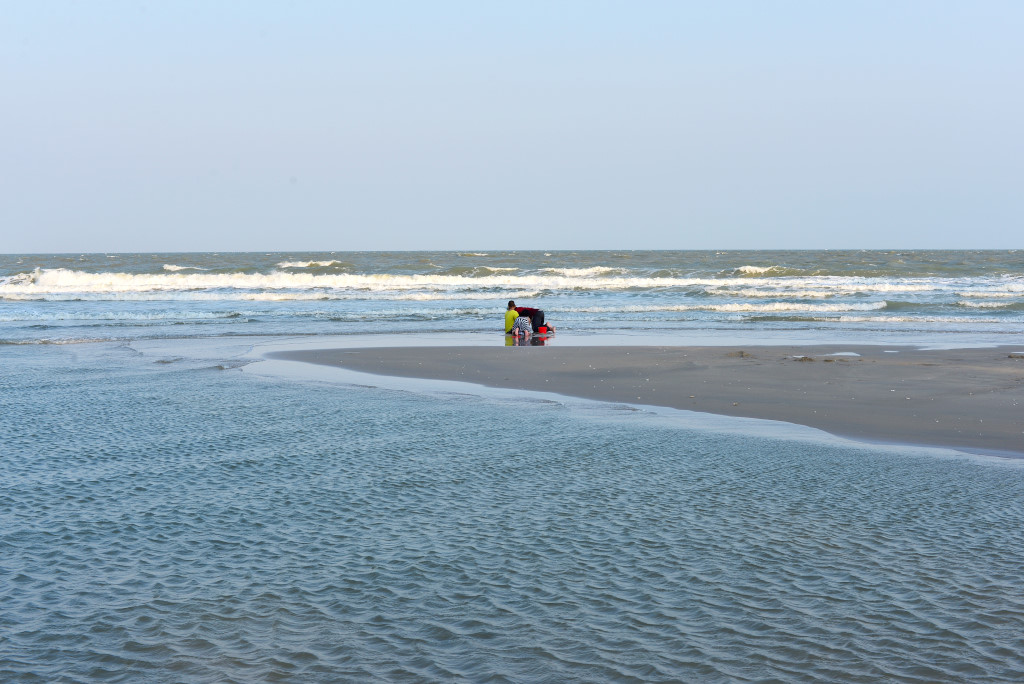 Back on to the shore and the main road, I return past a budding luxury condo development and into a small pizzeria, the simple act of inspecting the menu dragging me into a frenzied discourse on the state of the world with the older owner, who decided to unload his worldly possessions in Australia three years ago and move to Thailand. His raving degenerates into the proverbial revelations regarding the international bankers, the Jewish conspiracy, the Americans, Israel, the Masons and Illuminati, and how they have created ISIS, and brought down or are trying to bring down the Russians, the Italians, the Kennedys, and the disenfranchised pretty well everywhere. 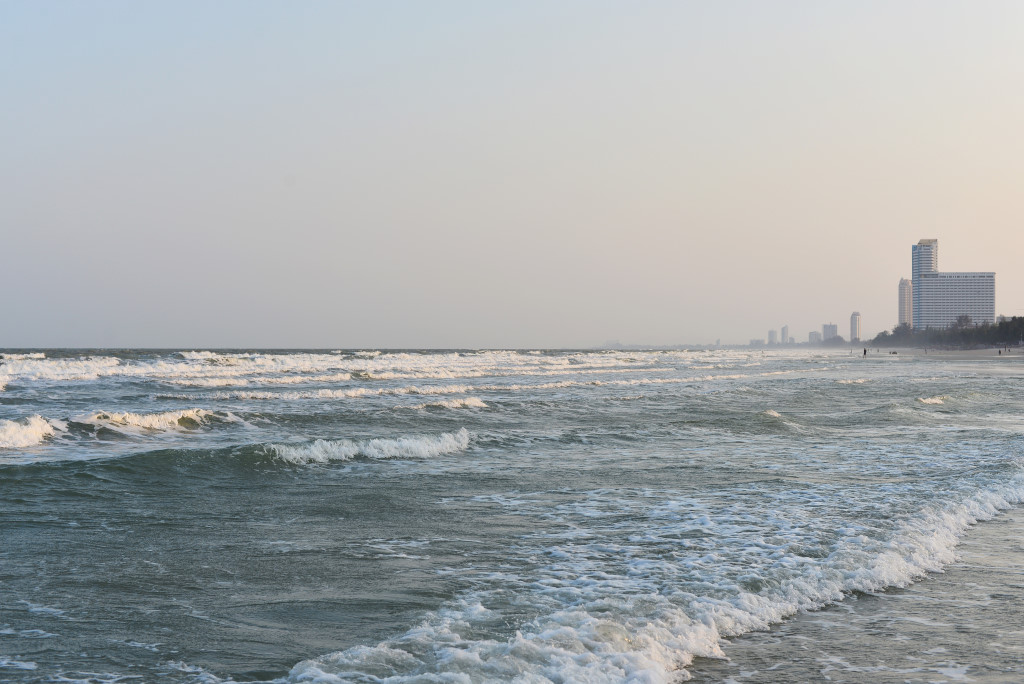 In his youth the man was apparently a fighter and never backed down. He liberally spews f-bombs and comparable words in his heavy dialect, which I am hoping few on the street will understand. He was called to Australia from his original home in Italy to put his expertise in working with travertine to use, and built up his life there prior to migrating to Thailand following retirement.
There are only two places to escape the evils of the world, he tells me, and Thailand is one of them, he nods confidently, leaving me dismayed at his woeful ignorance of the reality of Thai life and oppression so many suffer here, which the masses of westerners visiting or settling here have little interest in exploring. The gradually increasing volume of the Thai karaoke next door is as good a reason as any to keep moving, since I have little intention on blowing my budget on pizza, however authentic it may be and sympathetic I may be to his political sentiments, not that any other customers have appeared this evening.

I wander back to the center of Cha-Am from the pizzeria, the day long lost, the town mysterious and somewhat fey. A sprinkling of lights glistens through the darkness from the posh Raya resort, as well as some lesser ones. I eventually pass the smaller and more pedestrian hotels, the bristling neon lights, and the night market and its crowds set across from the bustle of the food stalls encircling the stage, musicians crooning Thai songs to the now fully occupied tables. 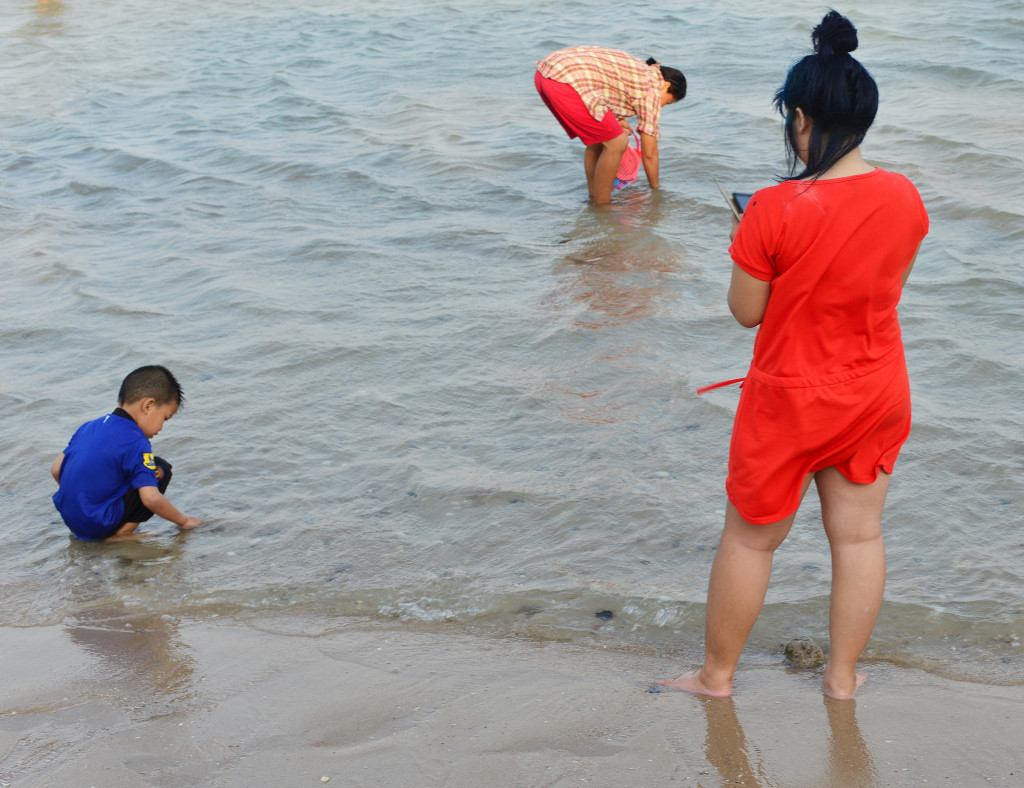 As all the tables are occupied, it may be better to weave back to the street and explore the market for interesting food, although the waterfront plaza features almost exclusively seafood, which I would prefer in this coastal community. The presence of the bored police is somewhat irrelevant, given the docile nature of the Thai people. The dense and slow-moving crowds are always trying for my tall and nervous frame, although the most appealing food on offer has to be immediately at the entrance, involving skewers of folded grilled bacon and enoki mushroom-stuffed bacon. 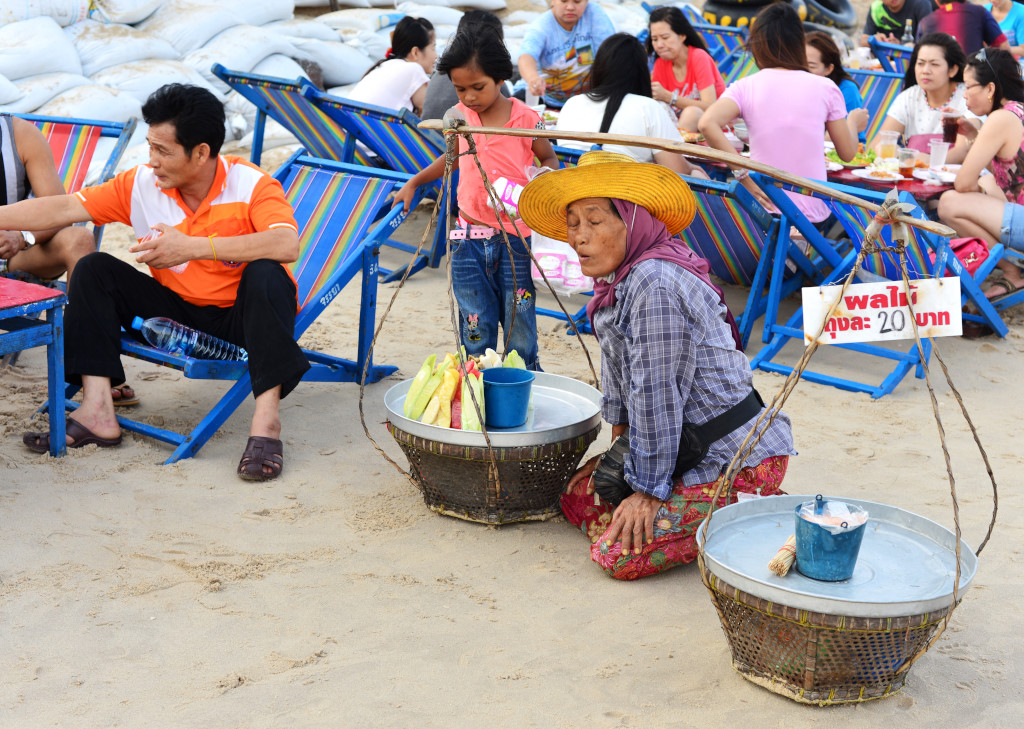 Back at the plaza, the crooning continues, a few tables now empty being a good enough reason to revisit some of the seafood stands amidst the thickening crowds of Thais, a few farang thrown in for good measure, including the English couple I met at the Phetchaburi train station. From one stand, the deep-fried halved sprats, and from another, three diced 10″ squids, served with a green chili dip, far too much protein for the evening, the heat of the sauce driving my nose to bleed, probably for the first time since I was a child.

Another relatively inconsequential day in my life has passed, but at least I didn’t spend it sitting at home, staring out the window and wondering where my life went to. It is at least warm out, there are people on the street, happiness abounds, and the large plastic cup next to me holds an ample mixture of Thai rum mixed with fresh tropical juice. And not a bad evening to be listening to Caetano Veloso’s wistful and gorgeous ‘Cê’ …