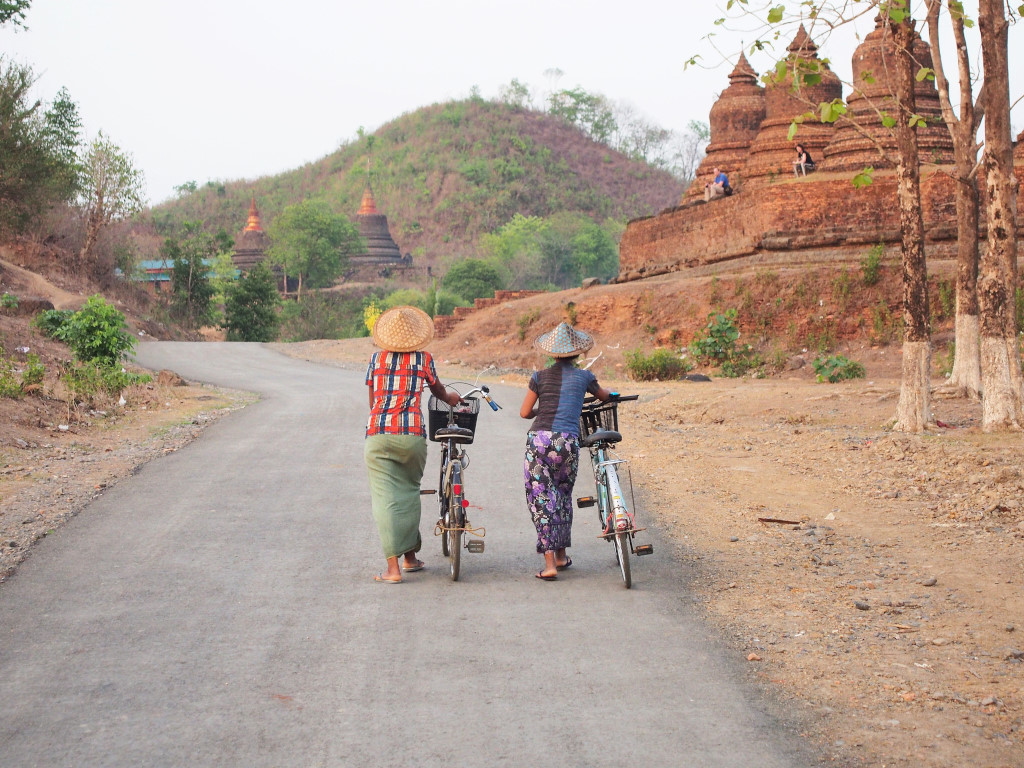 Having set the alarm clock for 5 am was disingenuous inasmuch as I had really gone to bed far too late yesterday to sincerely have wanted to leave the Prince shortly thereupon, and climb the hill behind the hotel to witness the first rays of the sunrise. 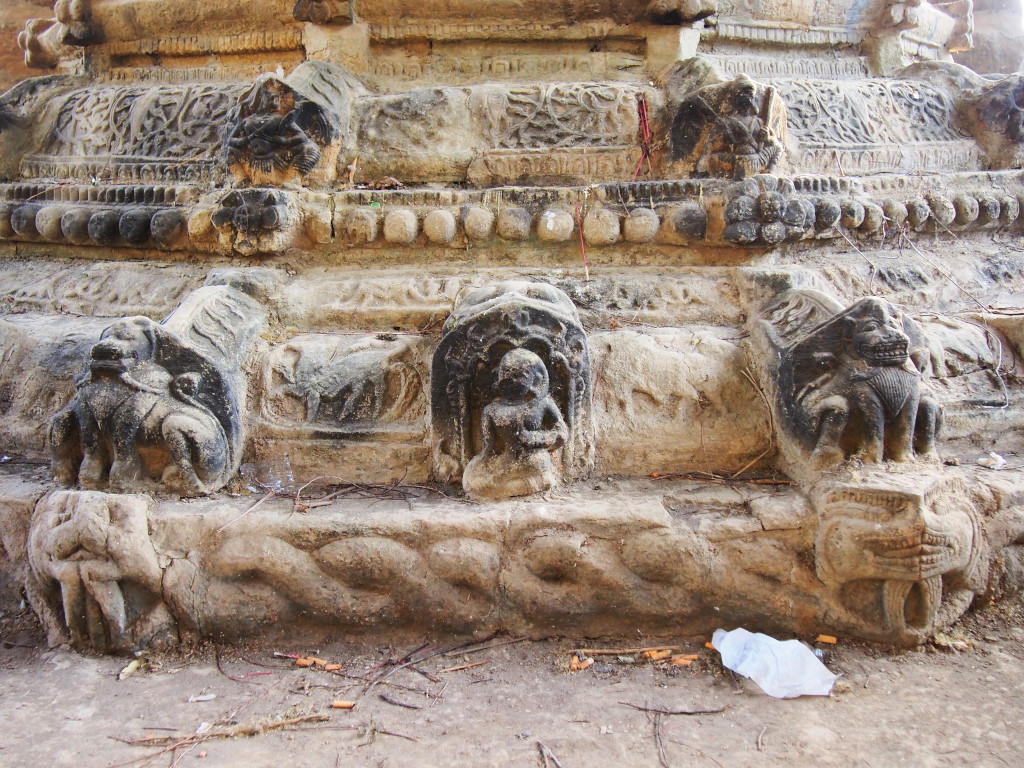 Not that I can really get adequate sleep afterwards. I toss and turn, the early morning sunshine turning to a clouded haze, from which the occasional droplets morph into a steady patter of rain that lasts into the early afternoon.

At the breakfast table, more conversation about inappropriate subjects, in particular, the Rohingya and the history Islamic separatism in Rakhine state, occasioned by the outbreak of fighting just north of where the road from Sittwe loops back down to Mrauk U. Now I am envisioning the road being shut down by the army just in time for my departure for Yangon … 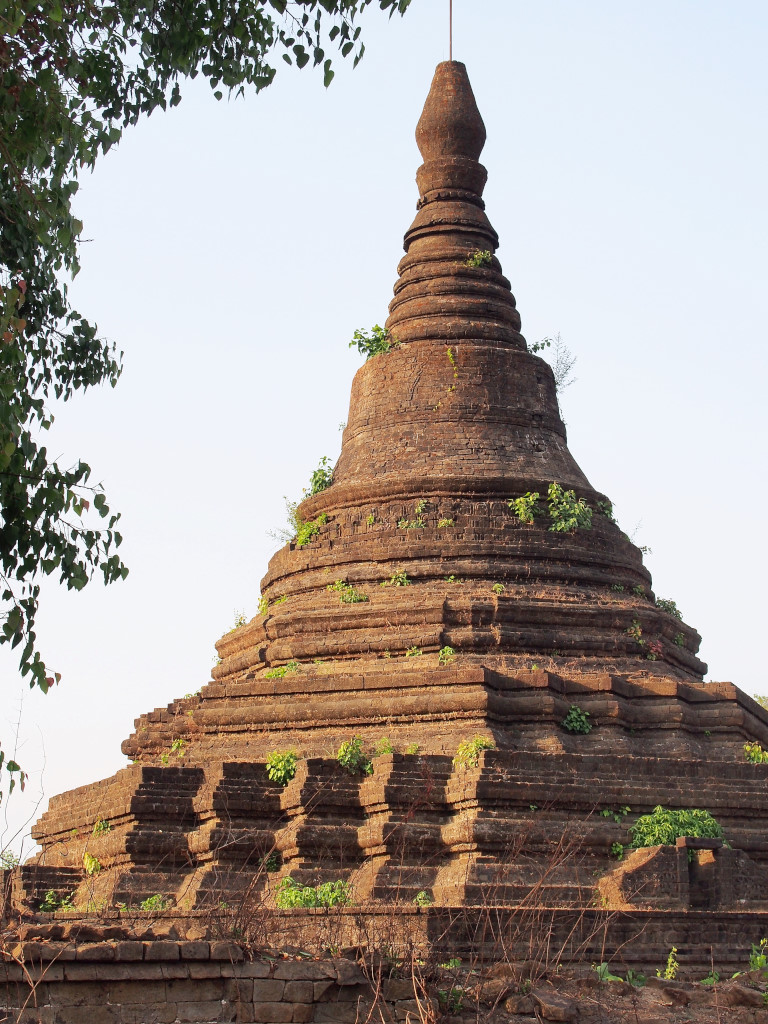 Having already taken in the relatively small but very charming historic temples in Mrauk U, this day is one of pleasure, which really means dedicating as much time as possible to catching up on my journal, now far behind. Given the amount of time it takes to log a single day’s adventures, I doubt I will get very much done today. 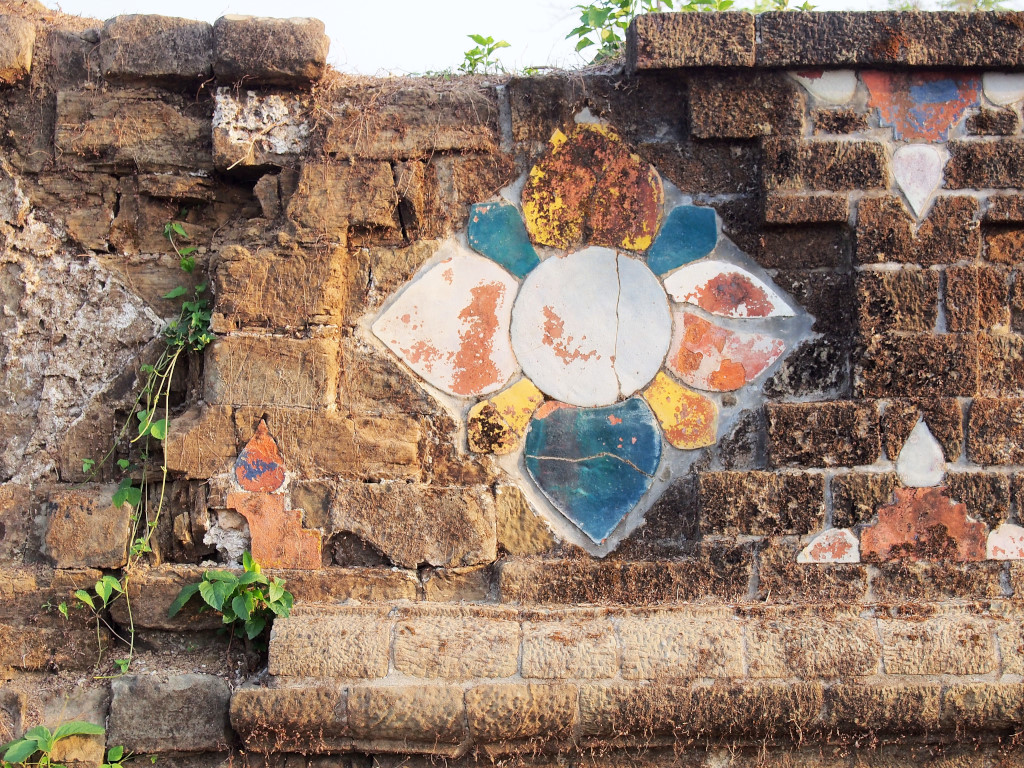 At least the strawberry wine I bought in the Kalaw countryside has been helping along …
All that said, I do still want to get a closer view of the some of the temples in the Southern Group I had just skimmed by at the end of the other day. 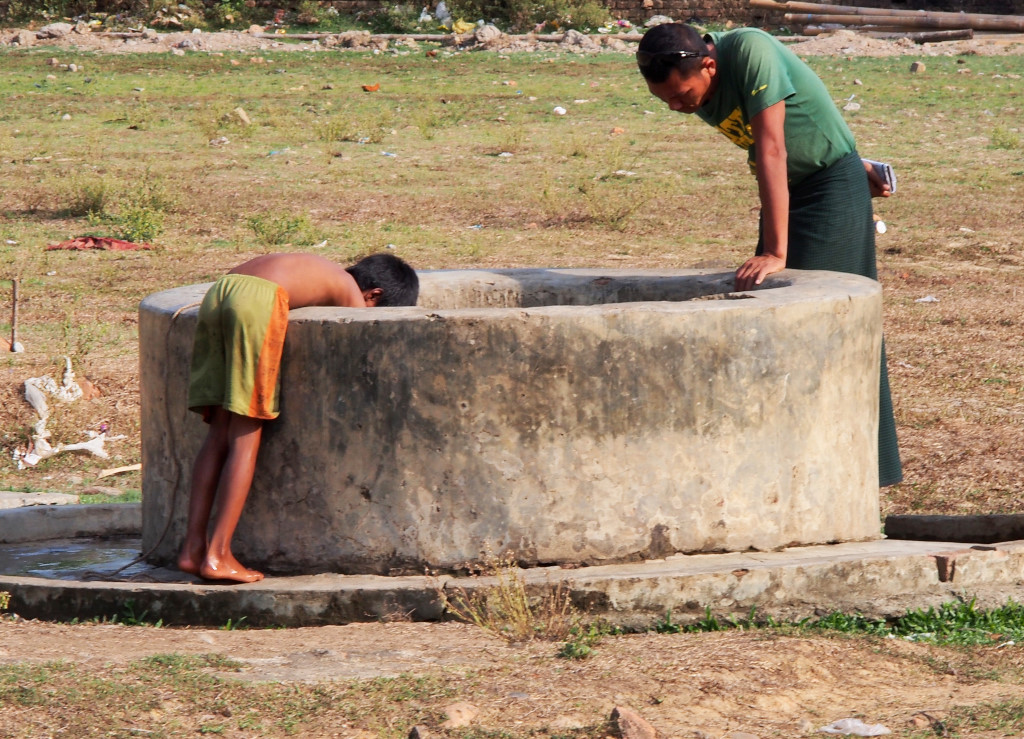 I revisit the Htuk Kant Thein Paya, and only in wandering past the begging monk into the linear corridor, and further into the maze of Buddha-laden alcoves, the memory of my prior visit is quickly refreshed. 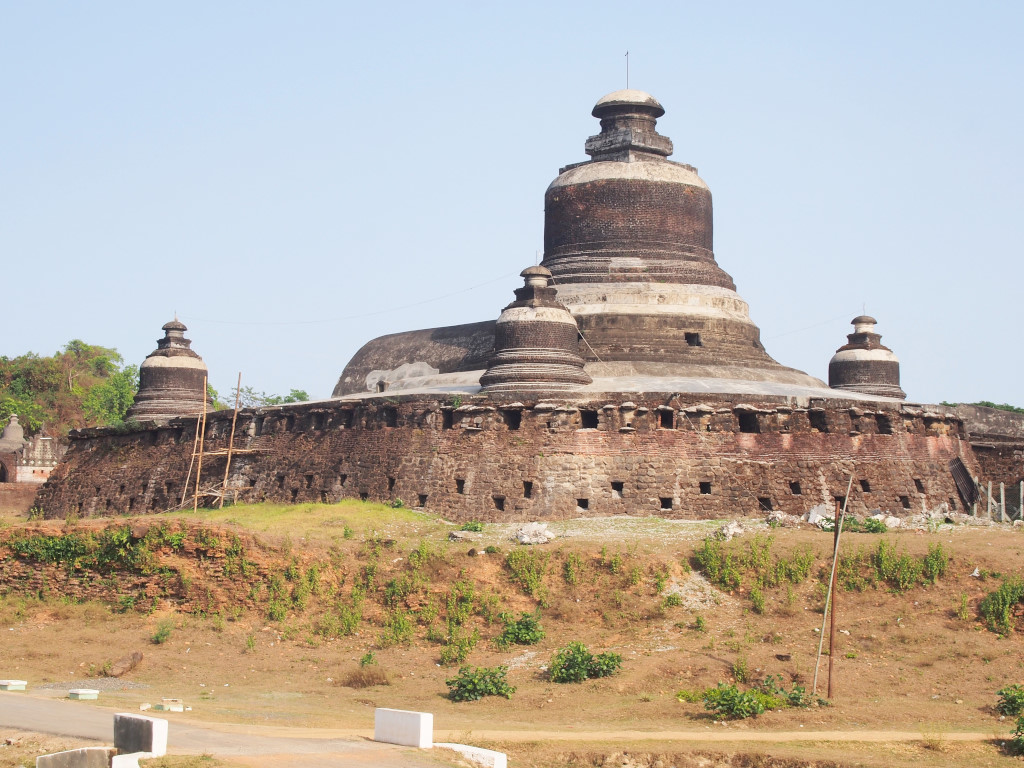 The story of the young painter at the L’Amitié is one of heartbreak, in that he lost his father whose painting had championed Mrauk U some three months earlier. The only one of three children to have picked up the brush in the path of his father, he has adopted a more naive, brighter, simpler and more childlike style, arguably far less sophisticated than the Corot-like brushstrokes of his father, but in such a unique forum of expression, arguments of technical prowess are possibly a bit academic.

On a happier note, some German artists have organized his visit to Berlin, which I assure him will be absolutely amazing, and an opportunity to take in one of the world’s greatest cultural cities – certainly a huge jump from Mrauk U.

Similar to other pagodas seen in the region, the Laung Bwann Brauk zedi rises from a linear base to a squat conical pinnacle, a series of rosette-inflected false porticos lining the octagonal lower layers of the structure, whose seams have been infested by sprouting greenery. Unusual are the remnants of Islamic-inspired glazed multi-coloured starbursts lining the outer wall ringing the pagoda. 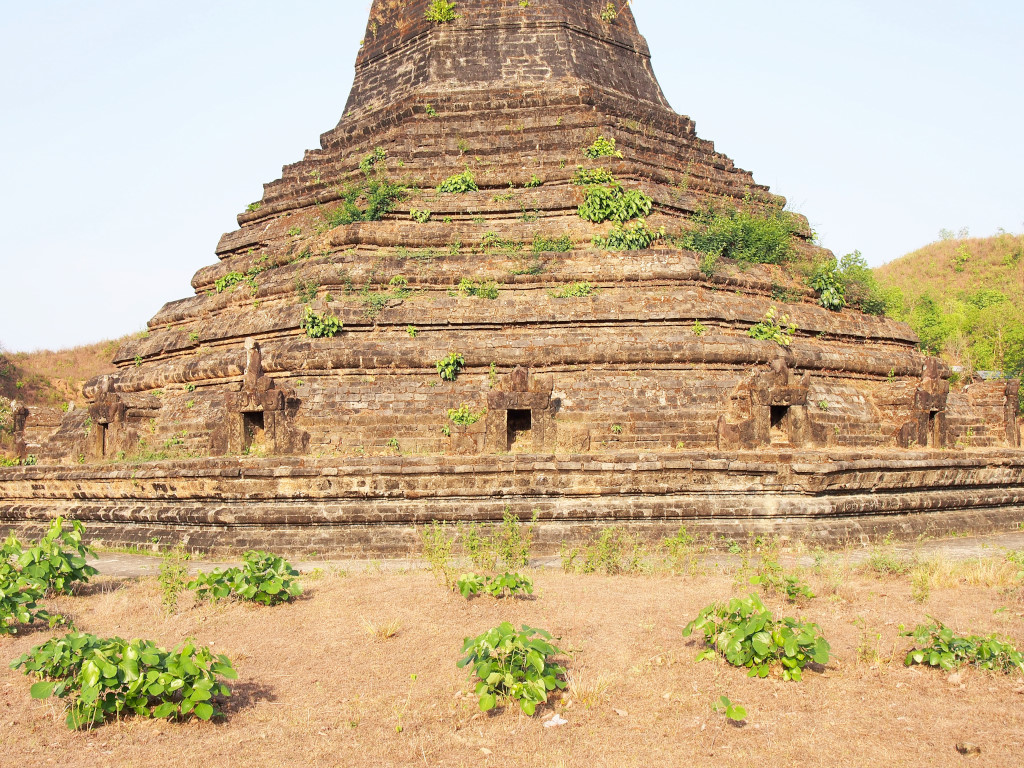 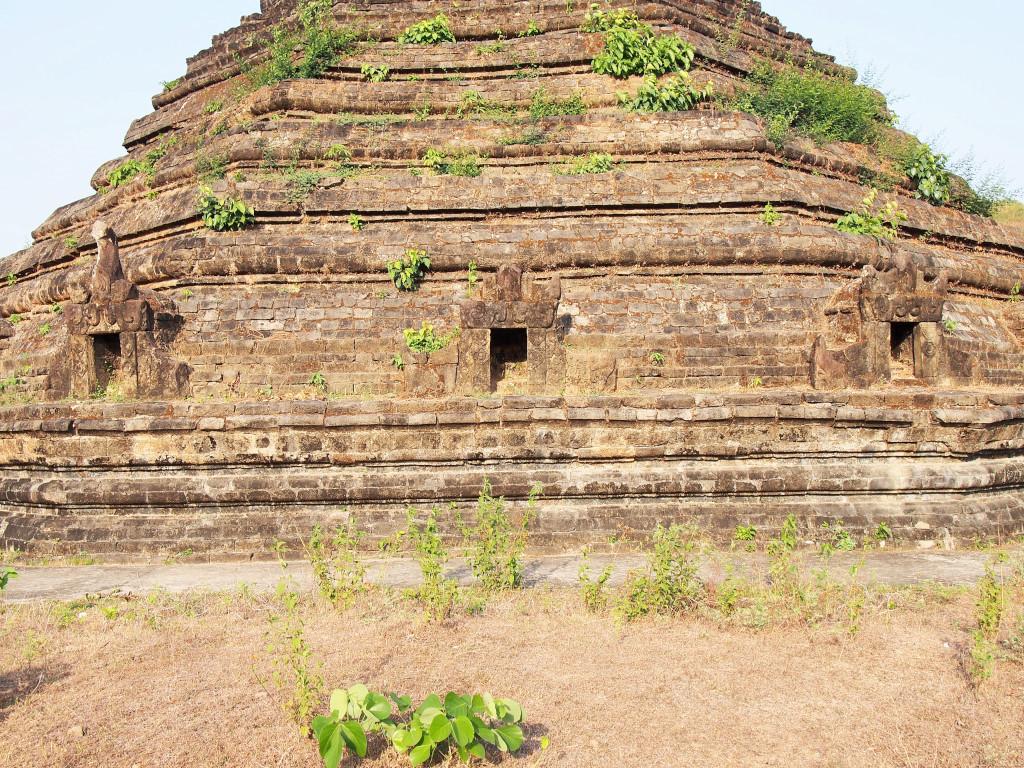 The neighboring Hti Payon Paya is similar in girth, each of the base’s four sides joined in a terraced manner, the orientation of the stepped joins shifted by 45° on the layer above the base. 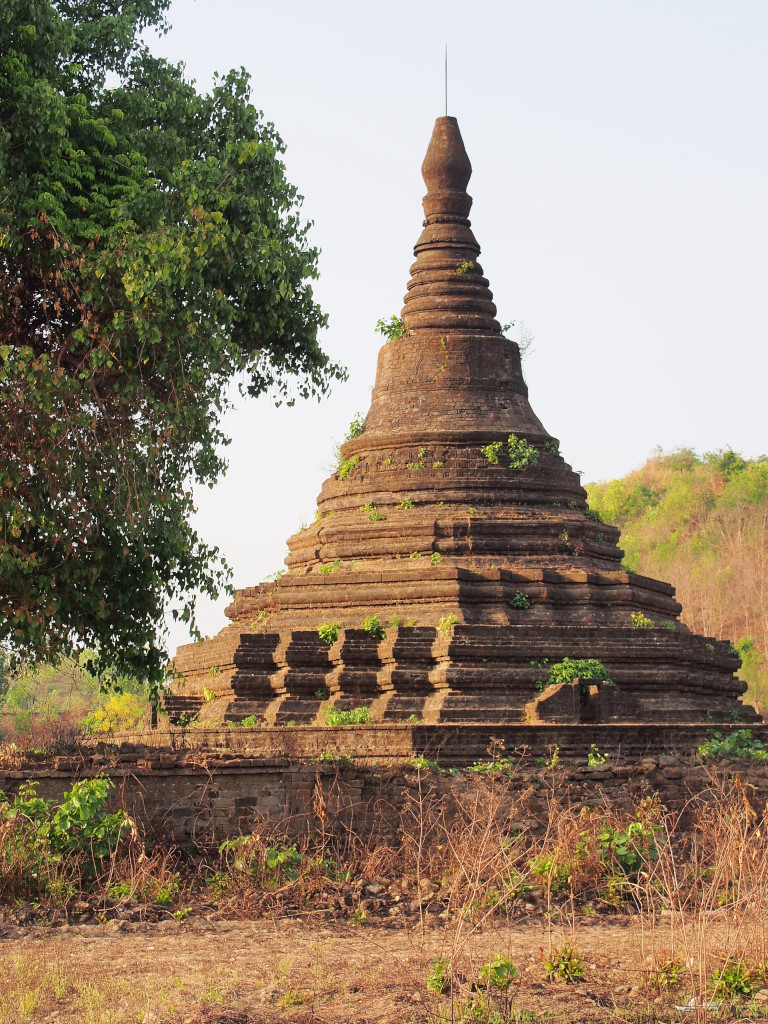 Embellishments are limited to the tiny square alcoves housing seated Buddhas, and the bursts of vegetation sprouting from the structure’s fertile crevices. 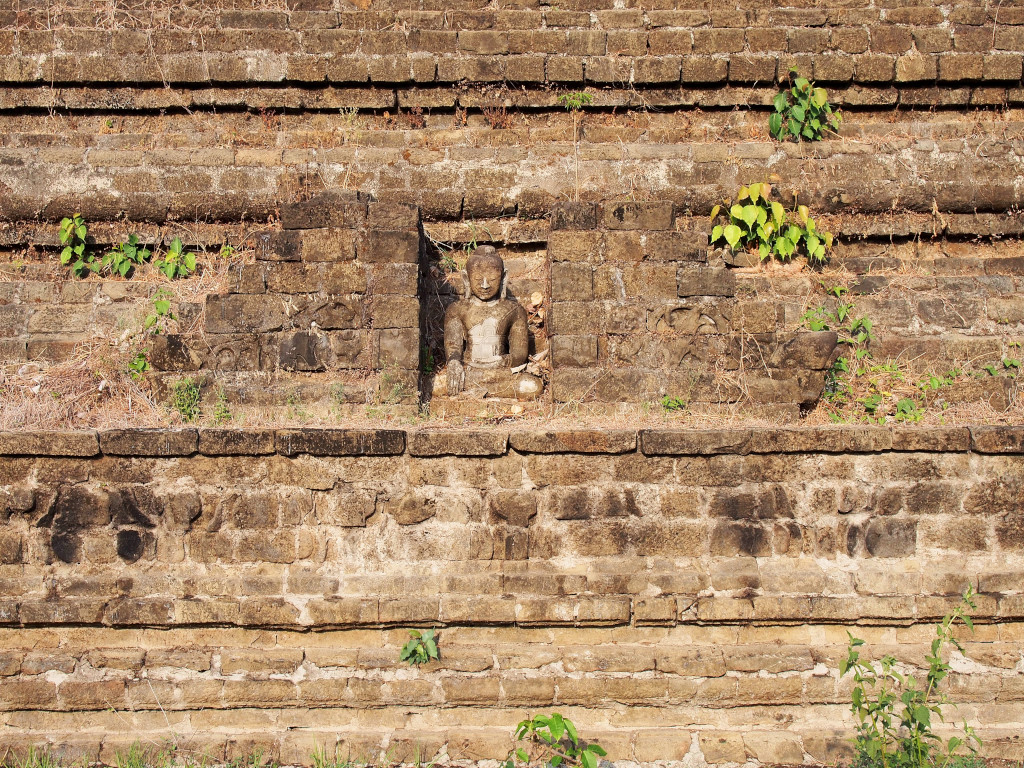 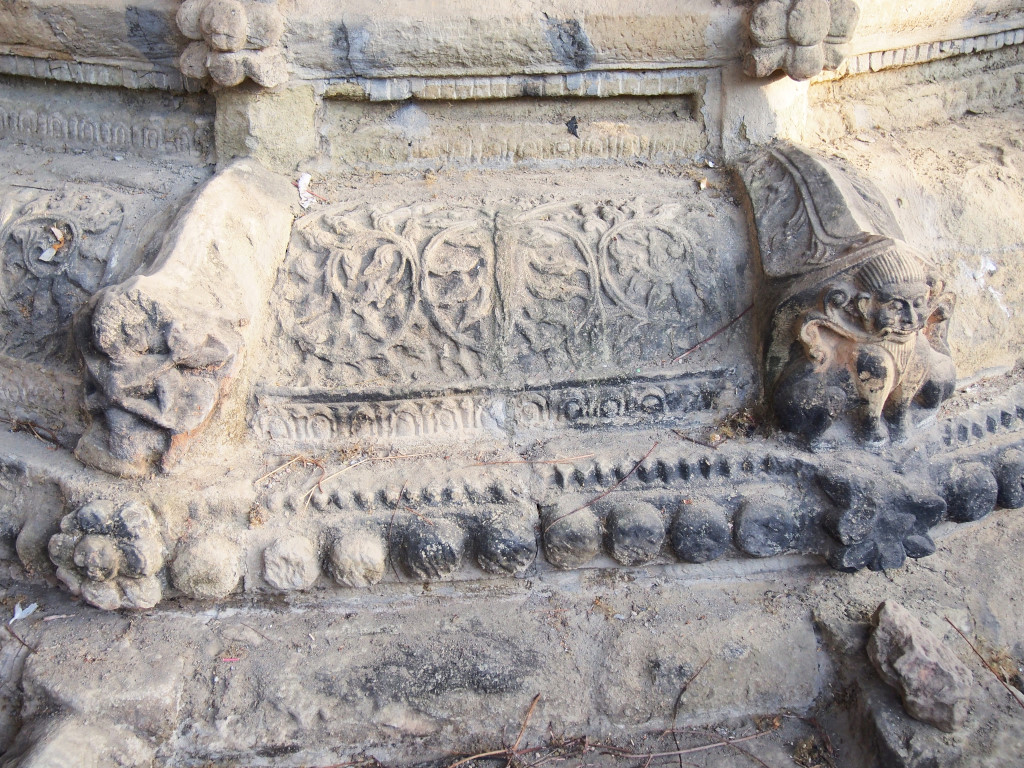 The green rolling landscape provides a suitably romantic backdrop for the smaller structures situated on the backside of the northern group of temples. I migrate through the scrub to the lesser structure across the dirt road, the young cow herder gazes at me with a sense of confusion and awe, some foreign creature from distant lands invading his homeland. However, I reach no further than the staggered facade of the nearby pyramid-like structure, set against the backdrop of the ponderous mature hardwoods. 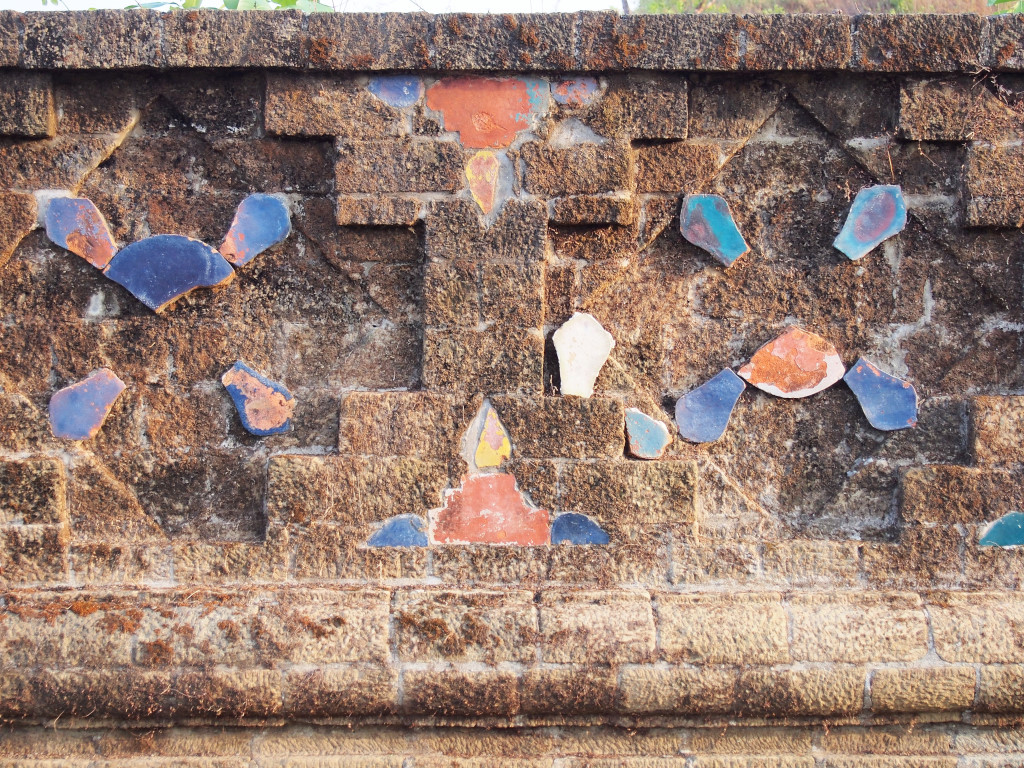 The golden Anawma Buddha swathed in maroon cloth is unremarkable, while the centuries-old floral motifs on its base are unique, joining sculptures of spirits, pedestrian animals and mythical creatures.

Lastly, the tiny Khrain Kaik Pitakataik paya houses the remnants of a small and slightly fluted temple, its outwardly sloping walls lined with coffered medallions culminating in a layer of rosette-lined bricks, from which erupt rows of stone leaves covered with bud-like engravings. 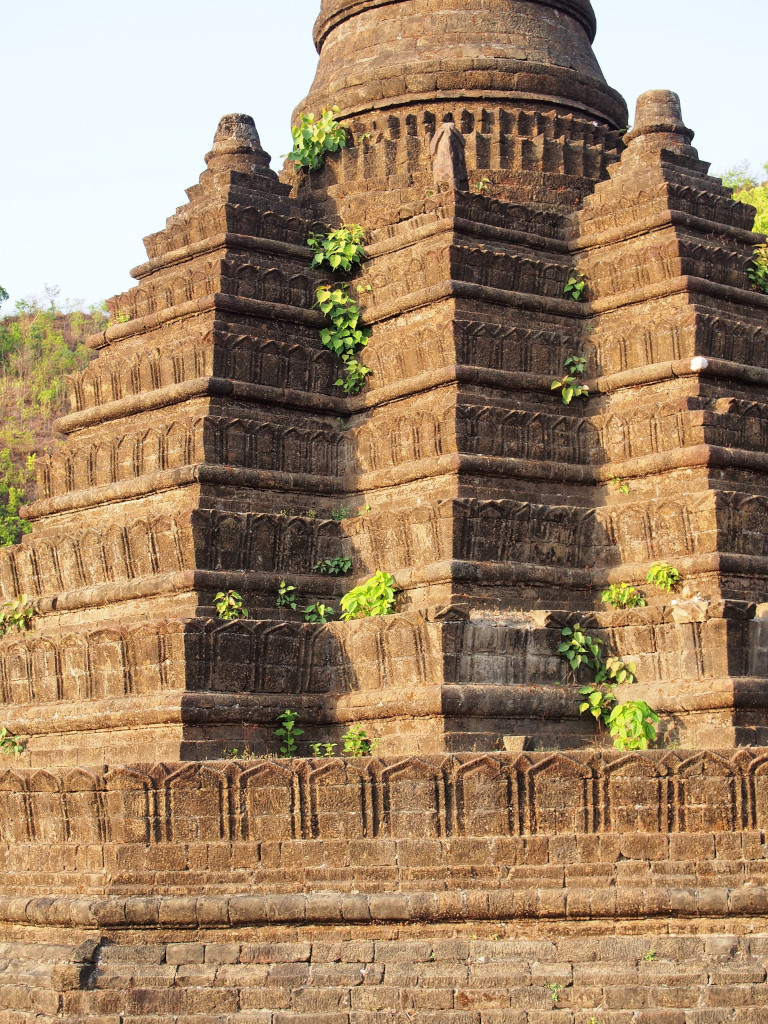 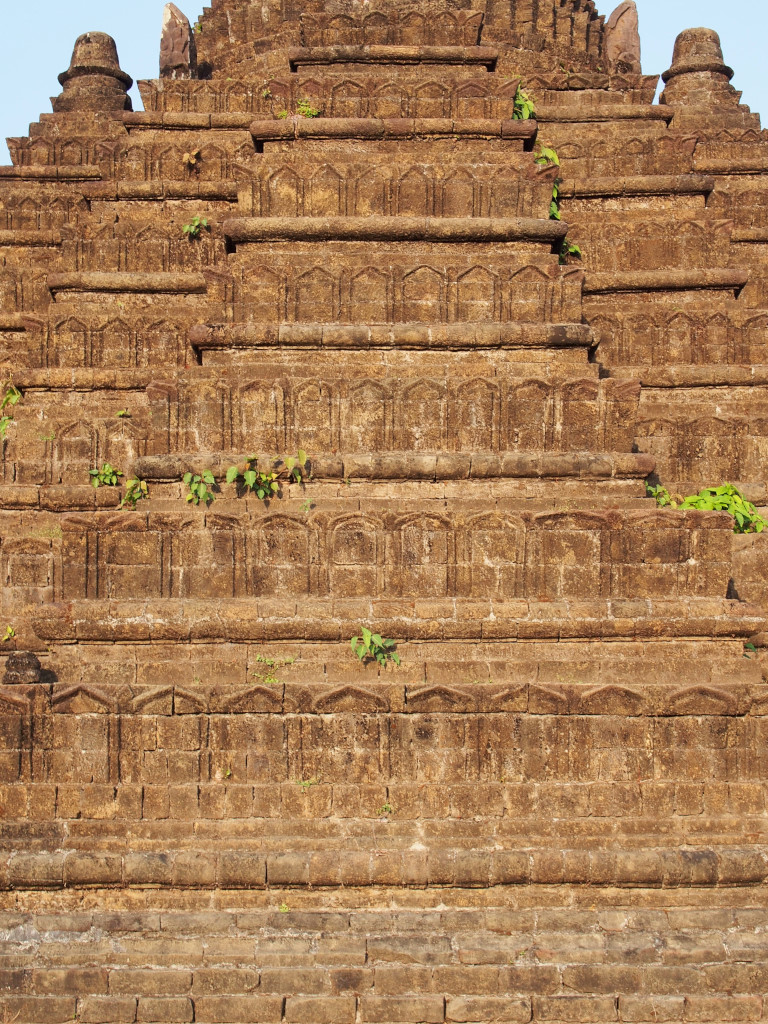 A young Texan woman from Dallas arrives with a small entourage at the Laung Bwann Brauk zedi, on a whirlwind trip through Southeast Asia, and absolutely in love with Myanmar, yet another American that has ventured outside the safety and confinement of the homeland into the bliss of the world far beyond the familiar. 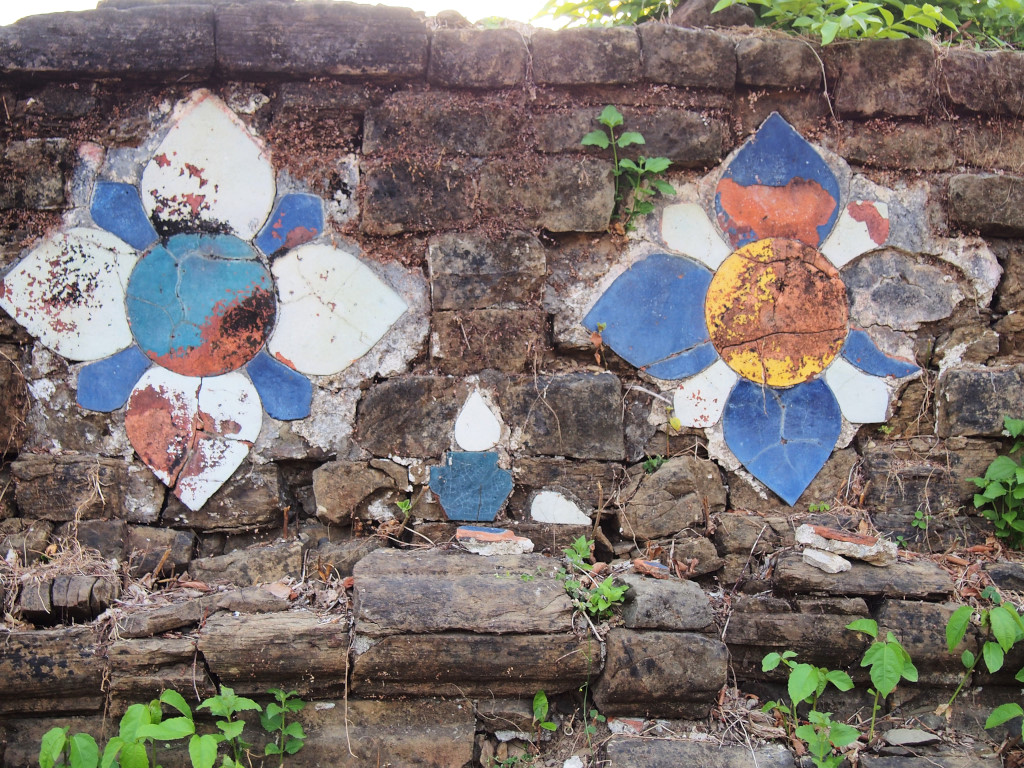 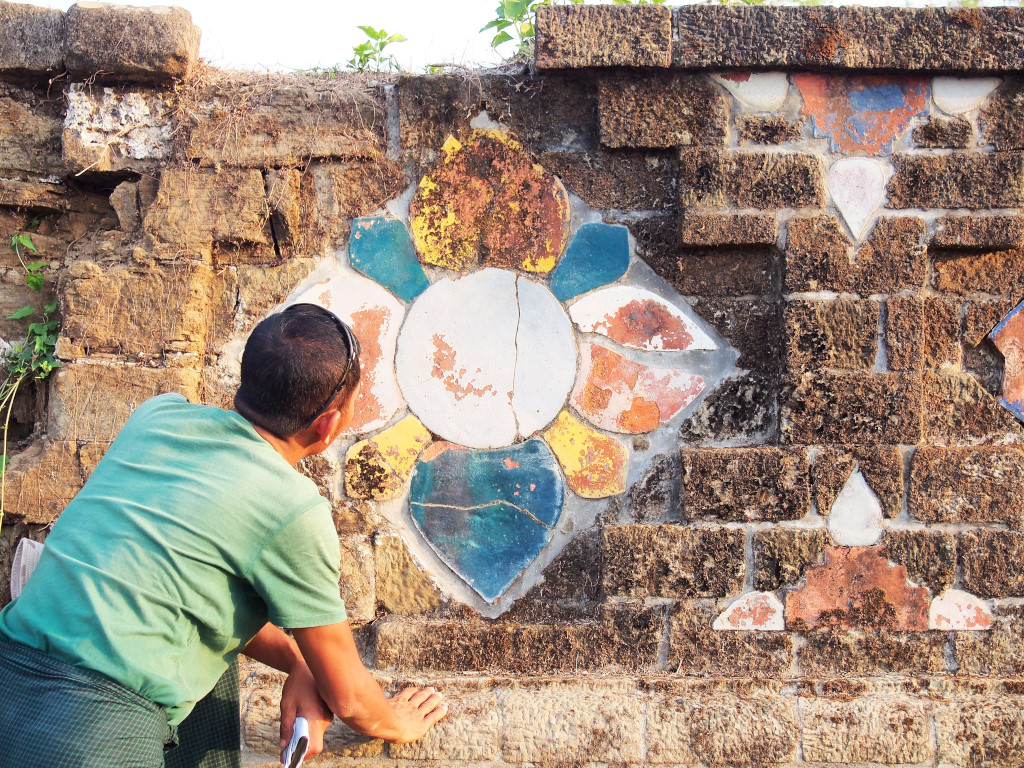 Feeling guilty that I am consuming her precious remaining daylight moments, I race back to the sprawling outdoor eatery facing the Shittaung paya for an intriguing Shan noodle soup blended with split peas and smoked ham. I continue on to the Andaw paya for another attempt at sunset photos, joining the older couple from Lübeck that I had met briefly on the opposing hill yesterday evening. 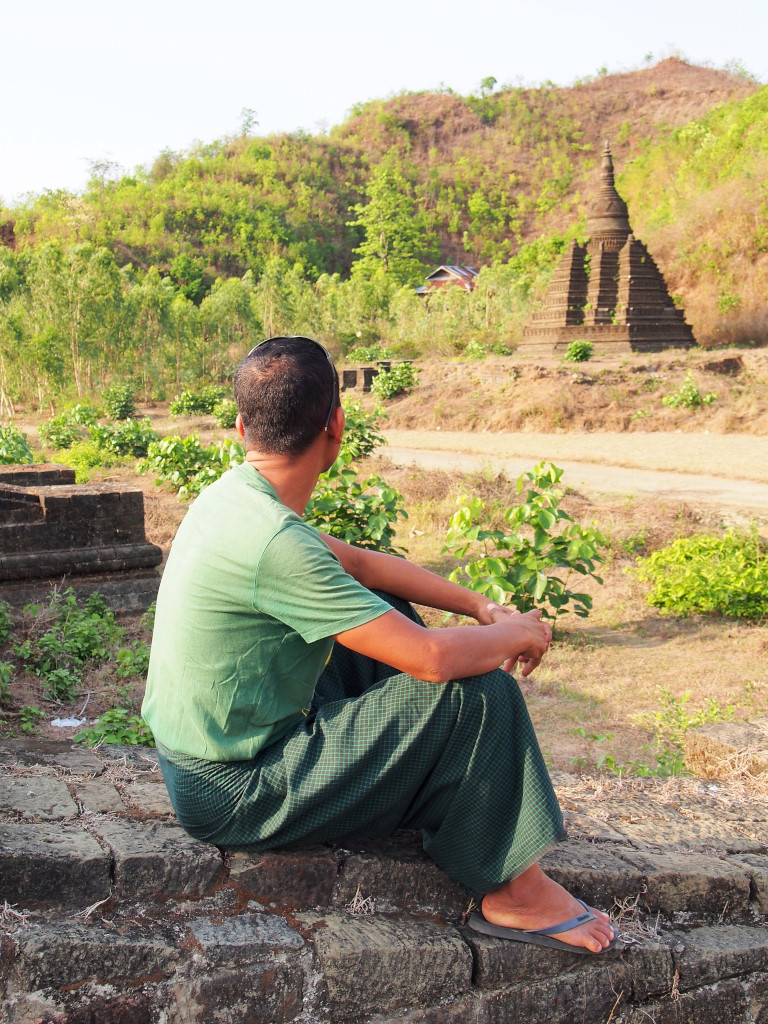 The sun disappears in a blaze of crimson behind the deep brown of a distant stupa, and then I am off again, the Northern Group of temples receding behind me one last time as I pedal furiously along the narrow and uneven alleys to the market area. 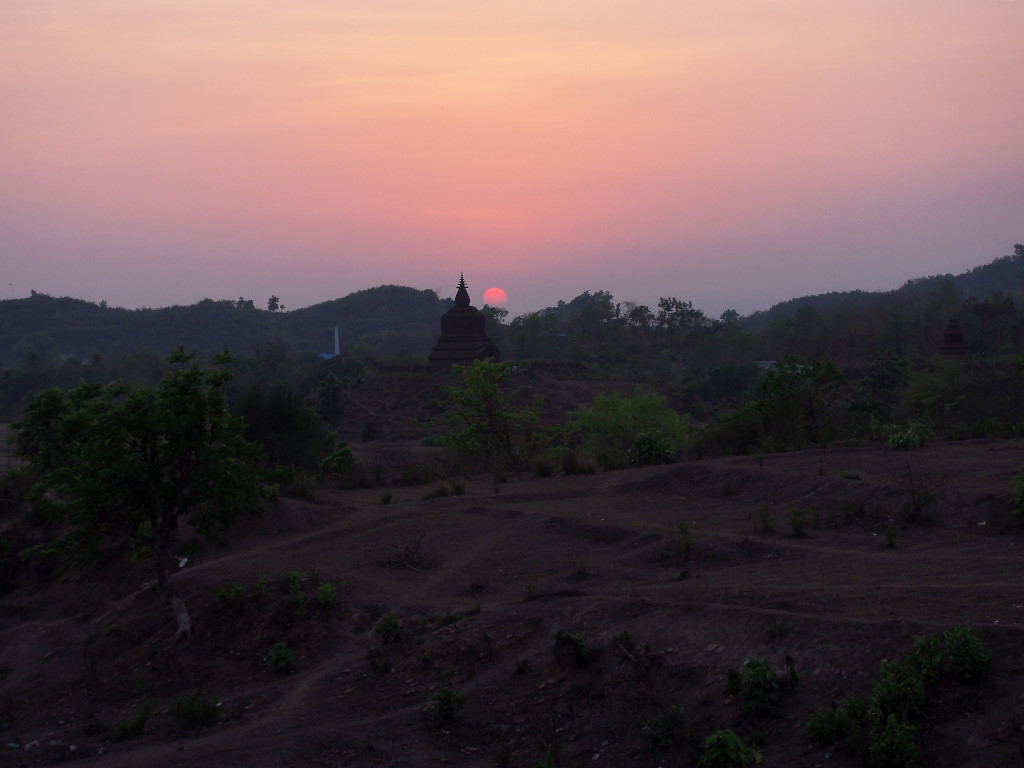 Darkness has set in prior to arriving at the same restaurant as yesterday evening, the spread of food also as promising as yesterday evening. Not just one but two different local fish are being served in oily, spicy curries, the savoury accompanying dishes blending chili, tomato, garlic, and onion into chayote- and squash-laden broths. As always, the food is too rich in calories to not leave the table feeling overwhelmed. 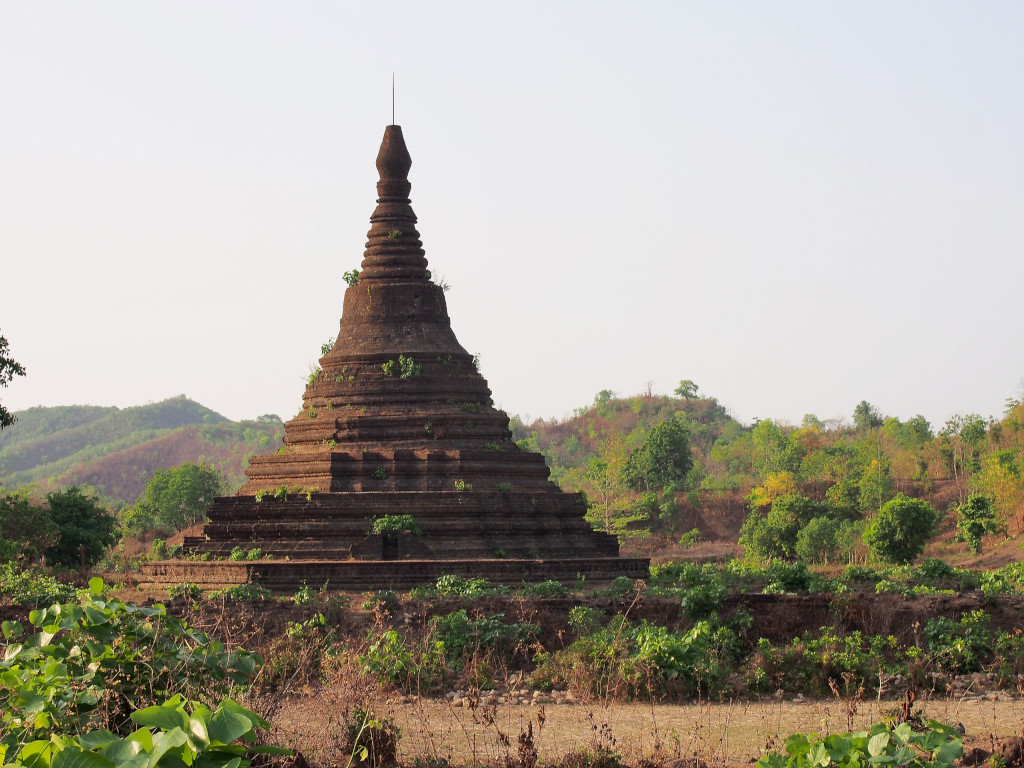 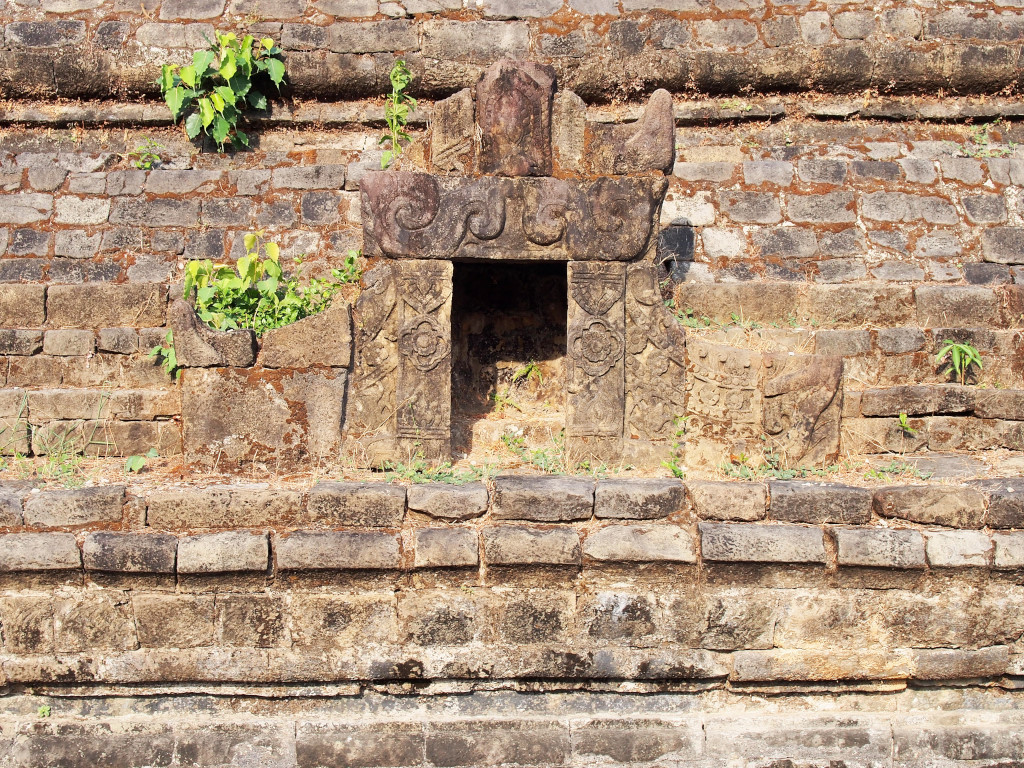 And finally, the last errands of the day, the last cash withdrawal in Myanmar while being aggressed by some dog, returning the bicycle to the rental place, and the walk back to the Prince hotel at the south side of the town, past the Shwe Moe restaurant where my episode in Mrauk U began four days ago. 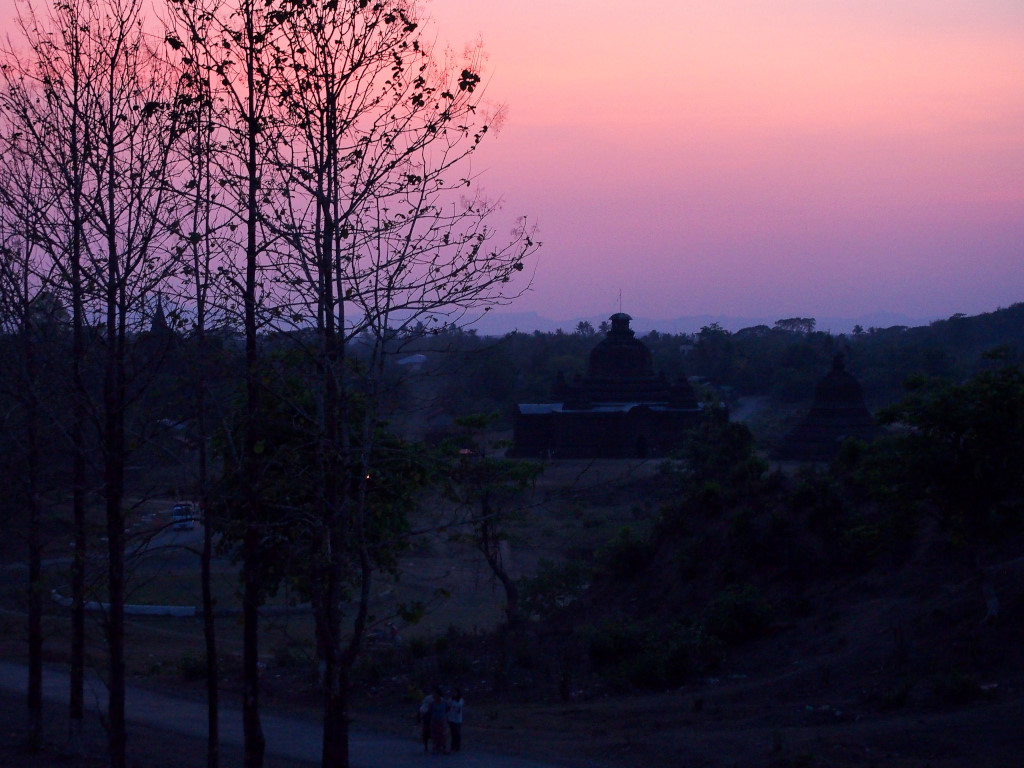